It was thanks to the friendly bus driver that I discovered that Amersham is a town of two parts, Old Amersham and Amersham-on-the-Hill. Had I got off at the station as I intended I would have had a long walk to the old town.

As the name suggests Old Amersham, in Buckinghamshire, was the original settlement and for hundreds of years it was under the sway of the Drake family family, a dynasty of Lords of the Manor of Amersham. Old Amersham is littered with testaments to their influence here but, perhaps the greatest gift was bequeathed by Thomas Tyrwhitt-Drake in the 1840s. He opposed the building of the London-Birmingham railway through the Misbourne Valley because it would have spoilt his view from Shardeloes, his ancestral home. Old Amersham Old Amersham was not touched by the Victorian development that accompanied the arrival of the railway in other towns. Today it thrives as an example of pre-Victorian history. Ironically, my bus did not go through the town so I started my exploration at the far end of the High Street. 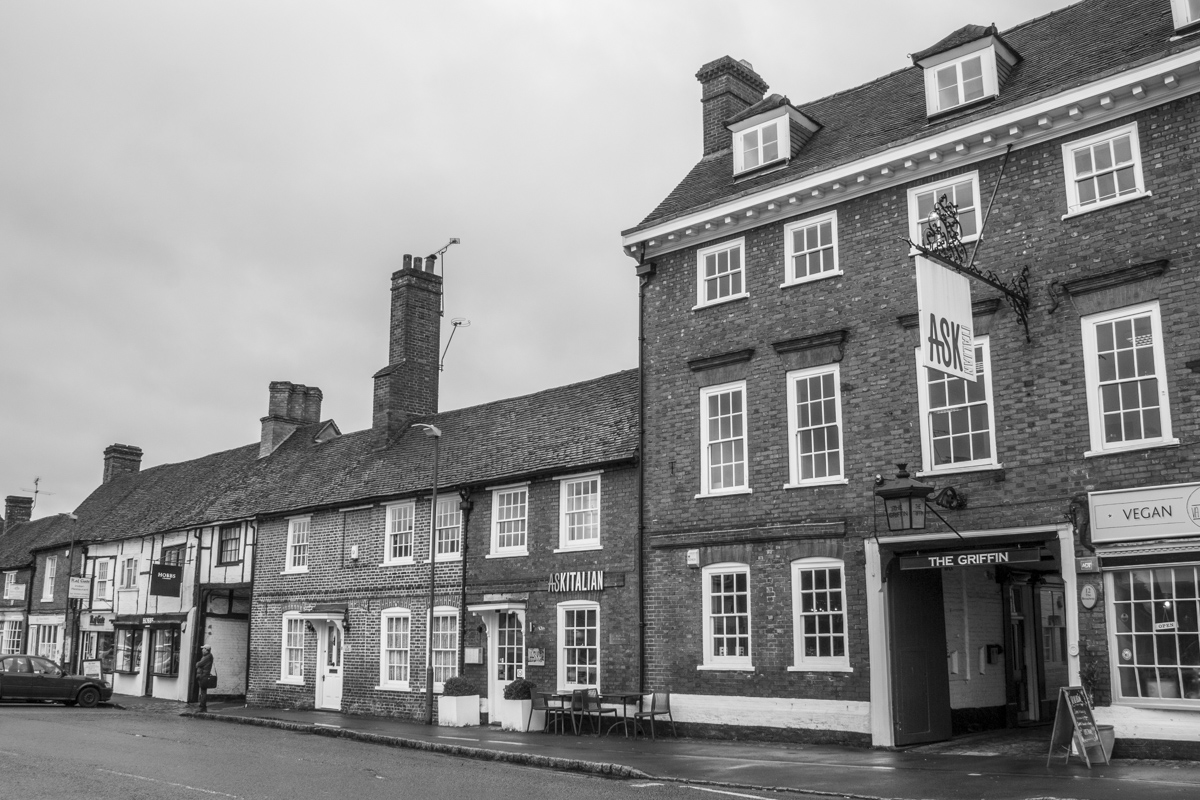 The High Street in Old Amersham

The High Street in Old Amersham

The generous width of the High Street reflects the its medieval tradition of weekly markets and an annual fair, rights granted by King John in 1200. It is still possible to distinguish the long, thin plots known as burgages, on the south side of the High Street which were rented to tradesmen. Their houses were at the front of these plots lining the street. Behind the houses the plots were used for workshops, livestock and cultivation. The south side was controlled by the borough and residents could vote for two Members of Parliament to which the borough was entitled. The Lord of the Manor therefore made sure this was an area of good repute in order to reap votes for family members. Today this area is a popular residential area featuring some lovely farm building conversions and cottages. 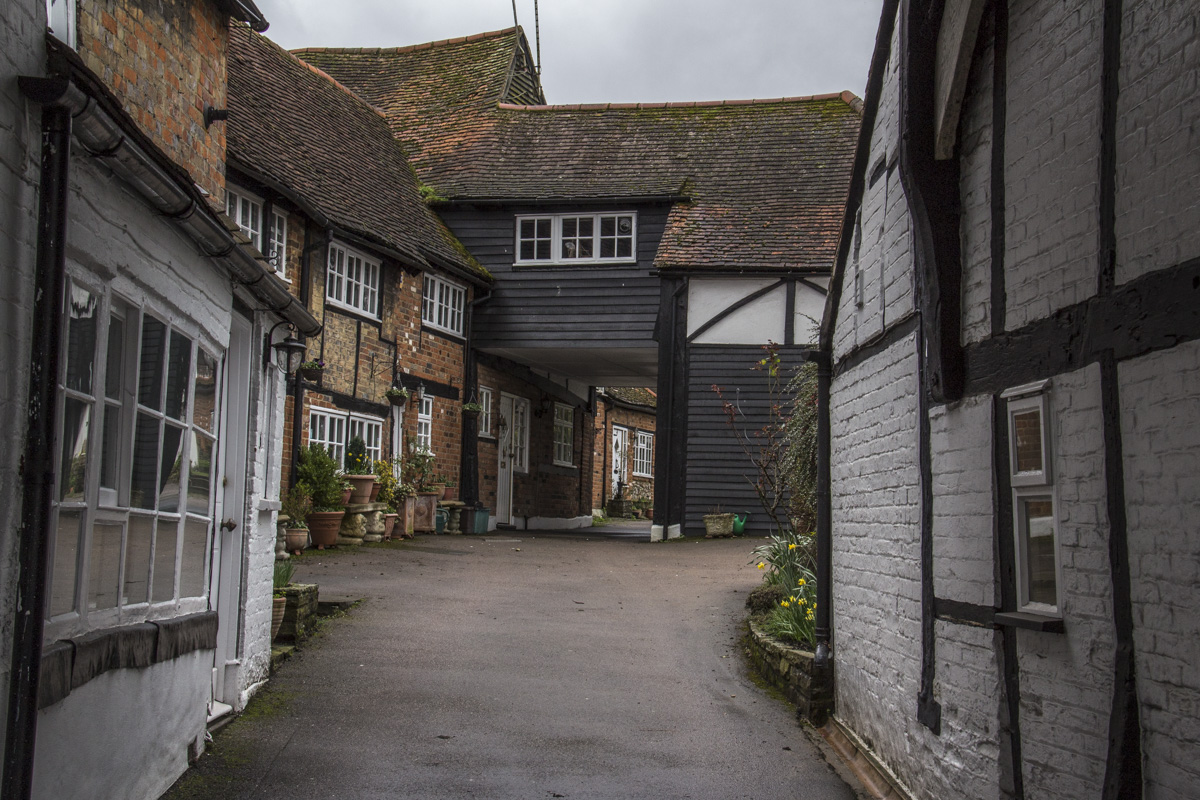 The borough did not extend to the north side of the High Street and this land belonged to the Rector. His final residence can still be seen perched on top of the hill above the town. The development on the north side was not so well controlled resulting in the random development of narrow plats that back onto the River Misbourne. The result? A lovely wide High Street of mixed architectural heritage. 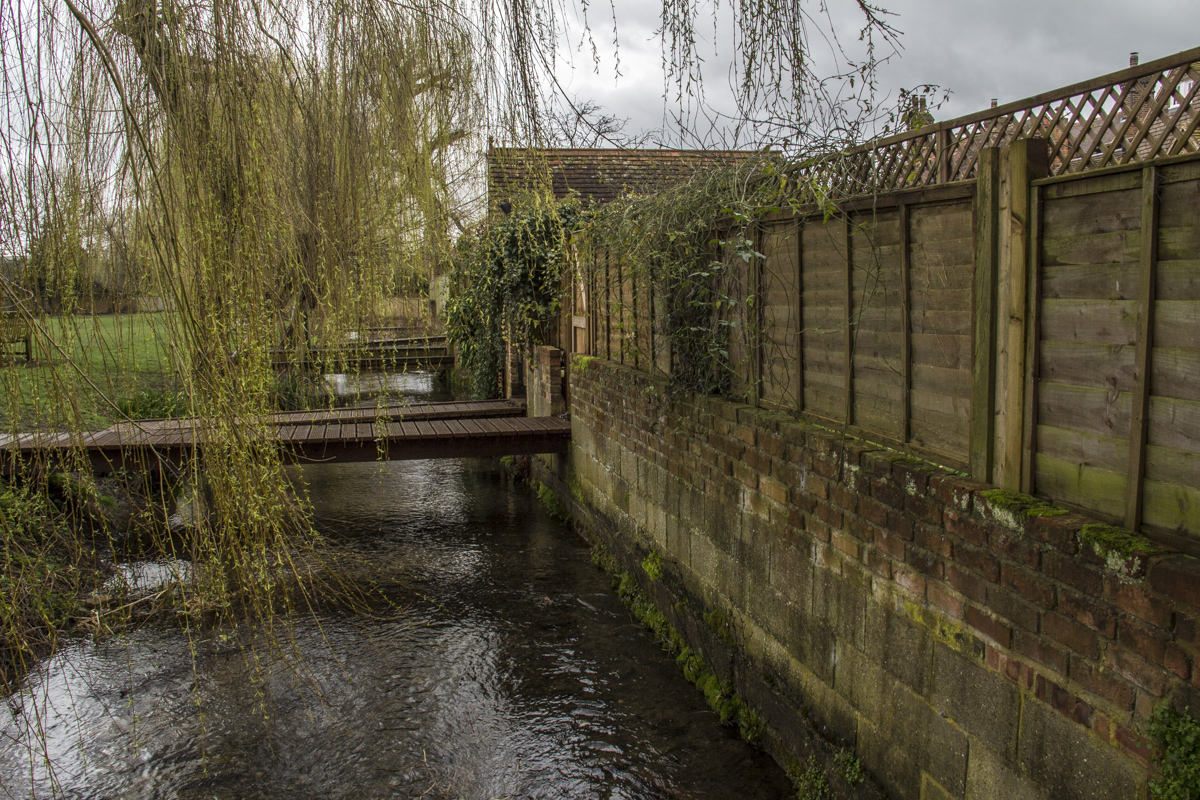 During the 1700s, as Old Amersham was one day’s journey by coach and horses from London on the London to Banbury road it was an important coaching stop. During this period there were at least seven coaching inns here all with archways leading into a stable yard where the horses would be changed. As the Victorian railways gradually replaced coaches some of the coaching inns were subjected to change of use but can still be identified by the characteristic archways. Some, for example the Kings Arms, are still important hostelries. 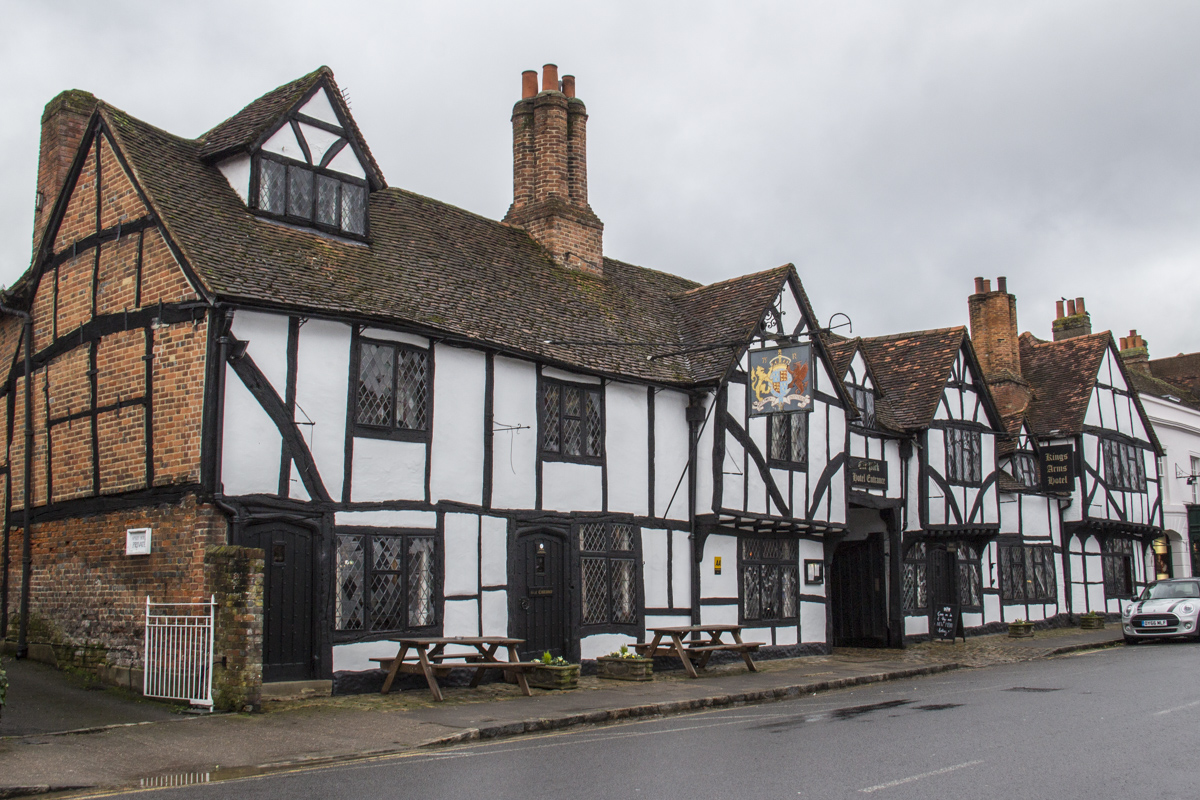 The Kings Arms in Old Amersham

The Market Hall in Old Amersham

The tradition of the weekly market continues every Saturday in Old Amersham but nowadays it is confined to the Market Hall. This Grade II listed building, built in 1682, was a gift from Sir William Drake to the people of Old Amersham. He intended the upper floor should be used for meetings and the ground floor or undercroft should be used as a market. However, over the years the building has also been used to house the local fire-engine, a public water pump and the town lock-up. According to hearsay the strange semi-circular supports in the corners of the ground floor were installed to stop vagrants sleeping here. Visitors may have spotted the 1811 welcome to the town. There is a sign on the first house in Amersham proclaiming that the Magistrates for acting for this Hundred have given the peremptory Order to the Constables and other Peace Officers to apprehend all Common Beggars and Ballad Singers and other Vagrants that they may be dealt with according to Law. 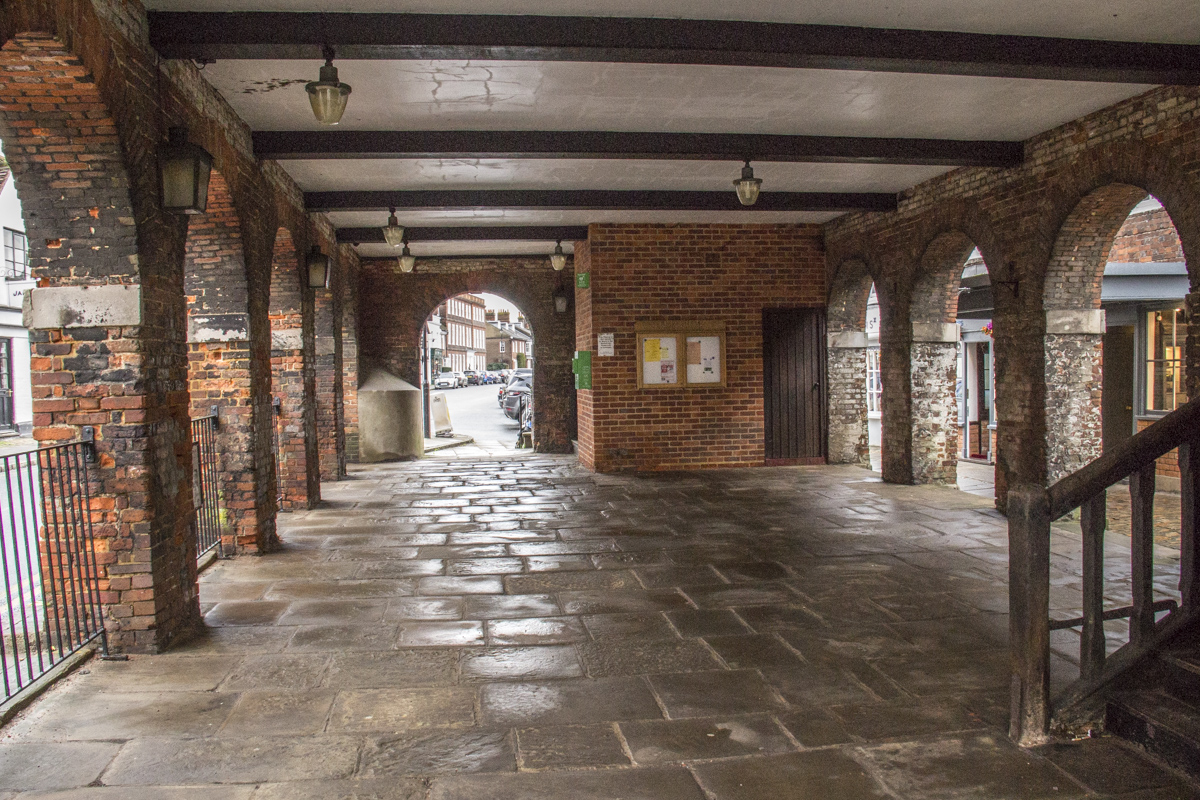 The Undercroft of the Market Hall in Old Amersham

Blooming in the heart of Old Amersham are the delightful Memorial Gardens. bloom in the heart of Old Amersham. Prominent in these gardens is a First World War cross fashioned from Portland stone. It was dedicated and installed in the churchyard of St Mary’s church in 1921. It was moved to its present location in 1949 when the Memorial Gardens were established. I enjoyed the tranquillity of the gardens, an oasis in the busy Broadway, and would love to come back for one of the summer concerts here. Some interesting additions have been made to the gardens to celebrate the centenary of the end of the First World War. They include two model bi-planes, a replicated battleship and a lone soldier. The latter is a stark memorial to the fallen in the Great War. The battleship, HMS Dreadnought, is cleverly sited amongst a bed of grass representing a rough sea. And the bi-planes are dedicated to Albert Ball one of the greatest pilots to take to the battle-strewn skies. 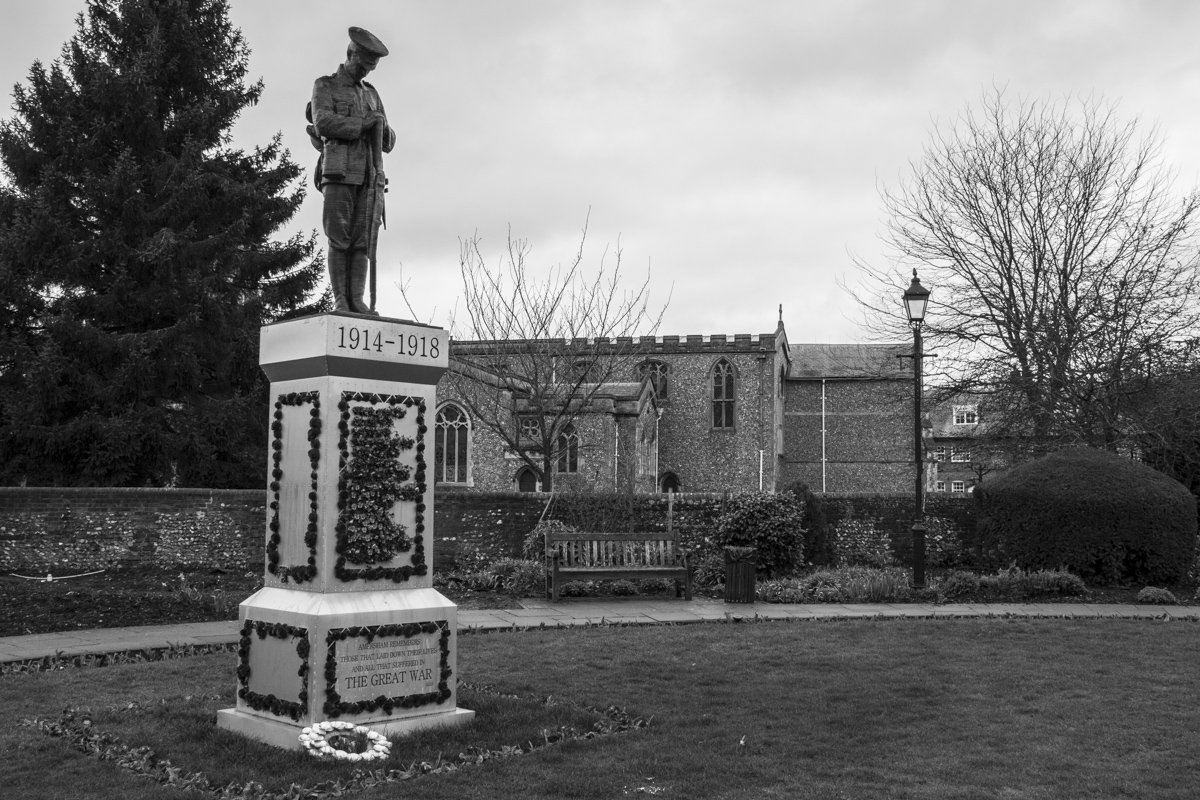 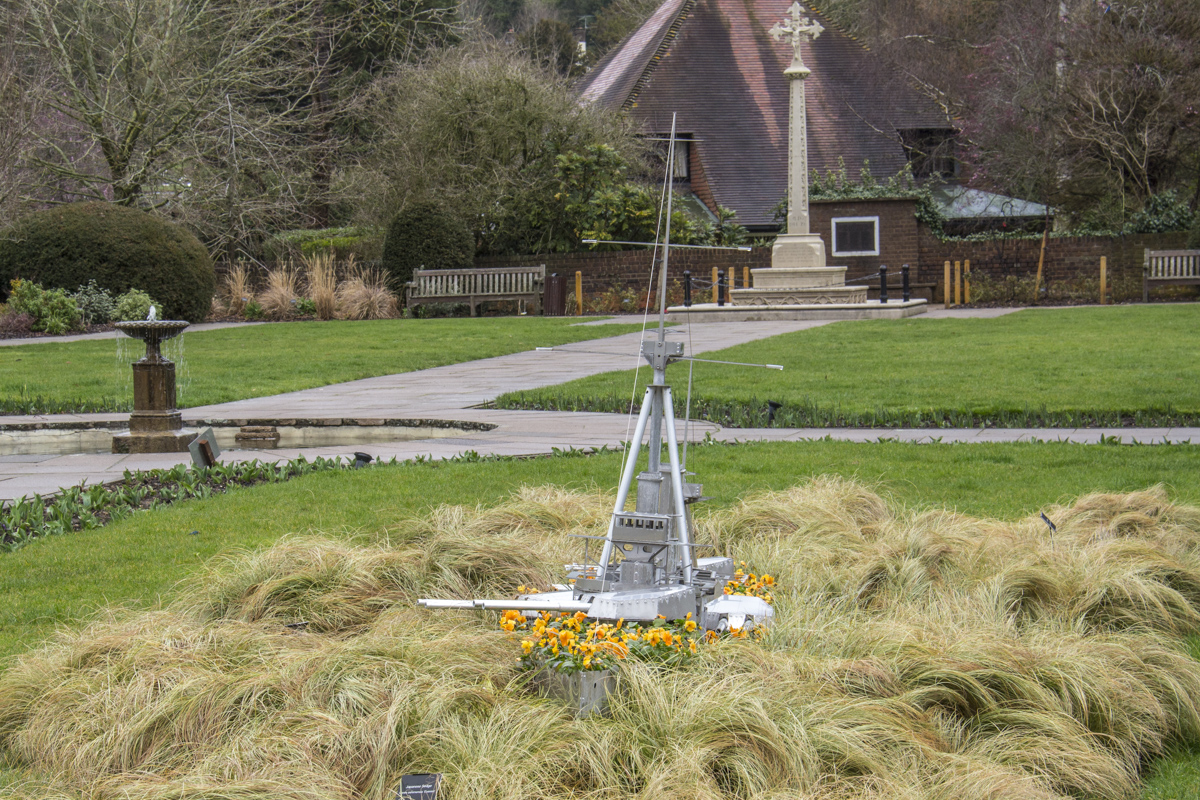 HMS Dreadnought in the Memorial Gardens in Old Amersham

Just beyond the Memorial Gardens is the church of Saint Mary. The present church dates from around 1140 but it is thought its site, where the Roman Road crossed the River Misbourne, was used by missionary monks to baptise converts. During the Middle ages as the town expanded so did the church until it looked much as it does today. The church came under the patronage of the Drake family around 1620 and remains so to this day. The building was restored to something resembling its medieval layout and clad in flint in 1870. Inside, the fine Drake Chapel contains memorials to the family. The church was busy when I went inside. I received a warm welcome and was offered some coffee and cake – but declined having just treated myself at the cosy Season’s Café across the road. I was told something of the churches’ activities which include an interesting treasure trail for children and left to the beautiful tones of a lady rehearsing for a forthcoming recital. All is peaceful now but religion has a gruesome history here. During the early sixteenth century Henry VIII agreed to the persecution of the Lollards (early Protestants promoting the use of the English language in church services rather than Latin). Several inhabitants of Old Amersham were tried, found guilty and burned at the stake on the hill overlooking the town. Now known as the Amersham Martyrs https://amershammuseum.org/history/research/religion/martyrs/ there are several memorials to them around the town and a play is performed has been written in their honour. 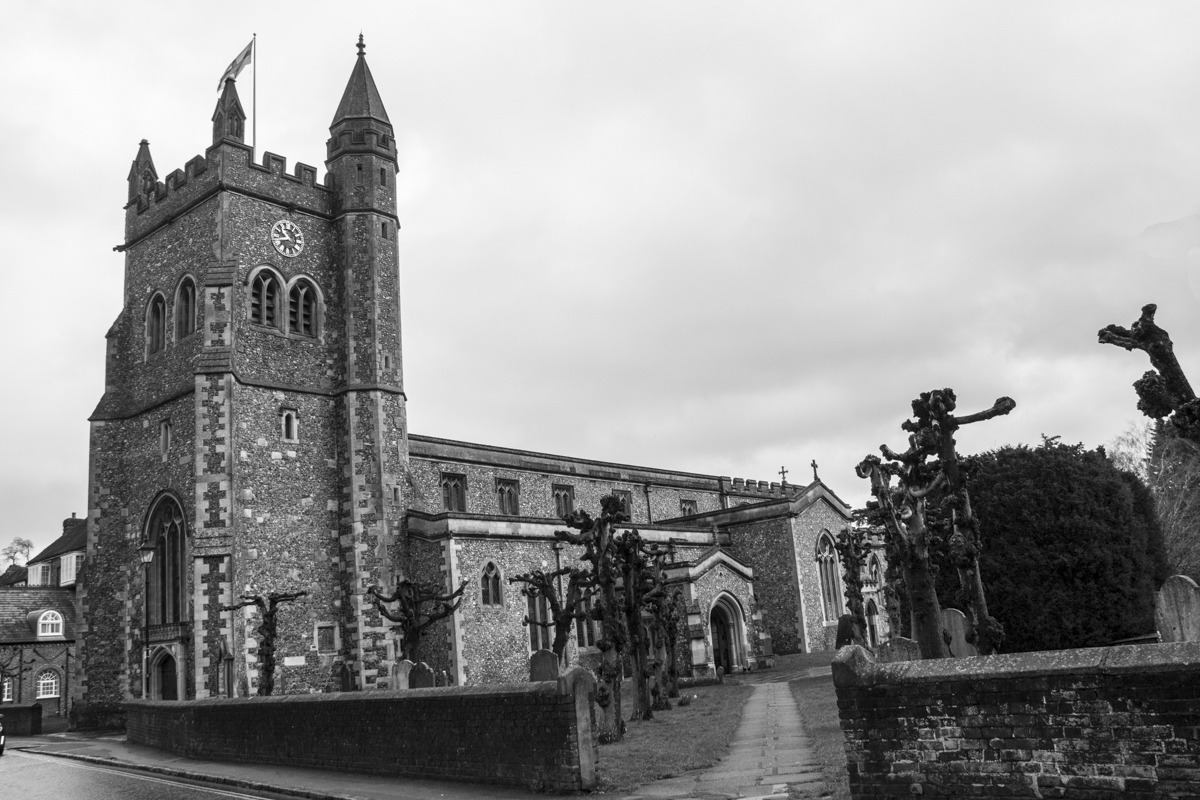 The Church of Saint Mary in Amersham

The Town Museum in Old Amersham

The Town Museum is a mine of information with well-organised time lines that document how and why the old town developed as it did. As interesting as the information it contains is the building it occupies which is a late medieval hall house probably dating from 1480. These houses were just one big room resembling a barn. Everything would have been done in that one room. Since it was built it has been extended and a first floor has been built above the ground floor. A lot of the original building is still visible. 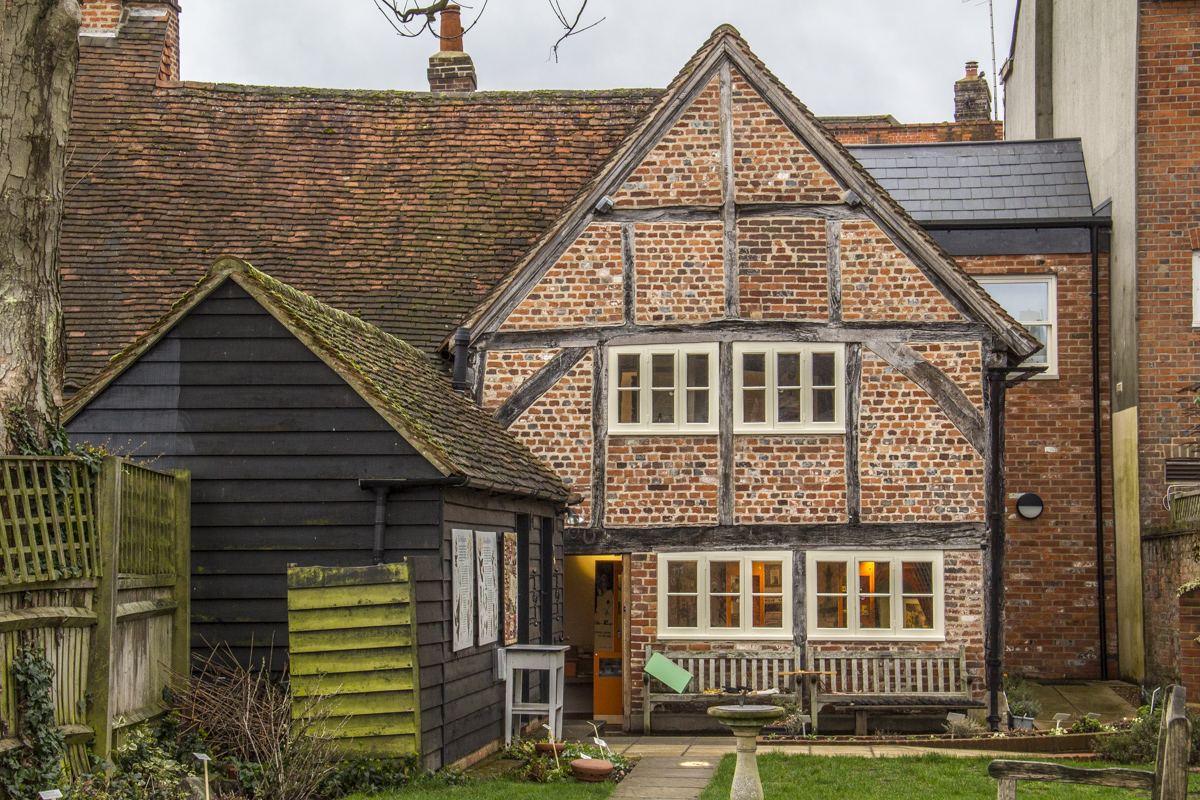 The rear of the Town Museum in Old Amersham

Take time to absorb all the history contained here and to talk to the volunteers who are more than happy to answer questions about the museum and the town. Strolling to the end of the herb garden I was fascinated by the privy on the bank of the River Misbourne. However, it is unlikely it drained into the river which is known to dry up occasionally. It is more likely that night soil men would cross the bridges to this and similar privies to empty the buckets under each hole, mix the contents with wood ash to be used as fertiliser on farms and large gardens. It was interesting to take another walk around the town after my visit to identify the buildings mentioned in the museum that are now being used for purposes other than those for which they were designed. 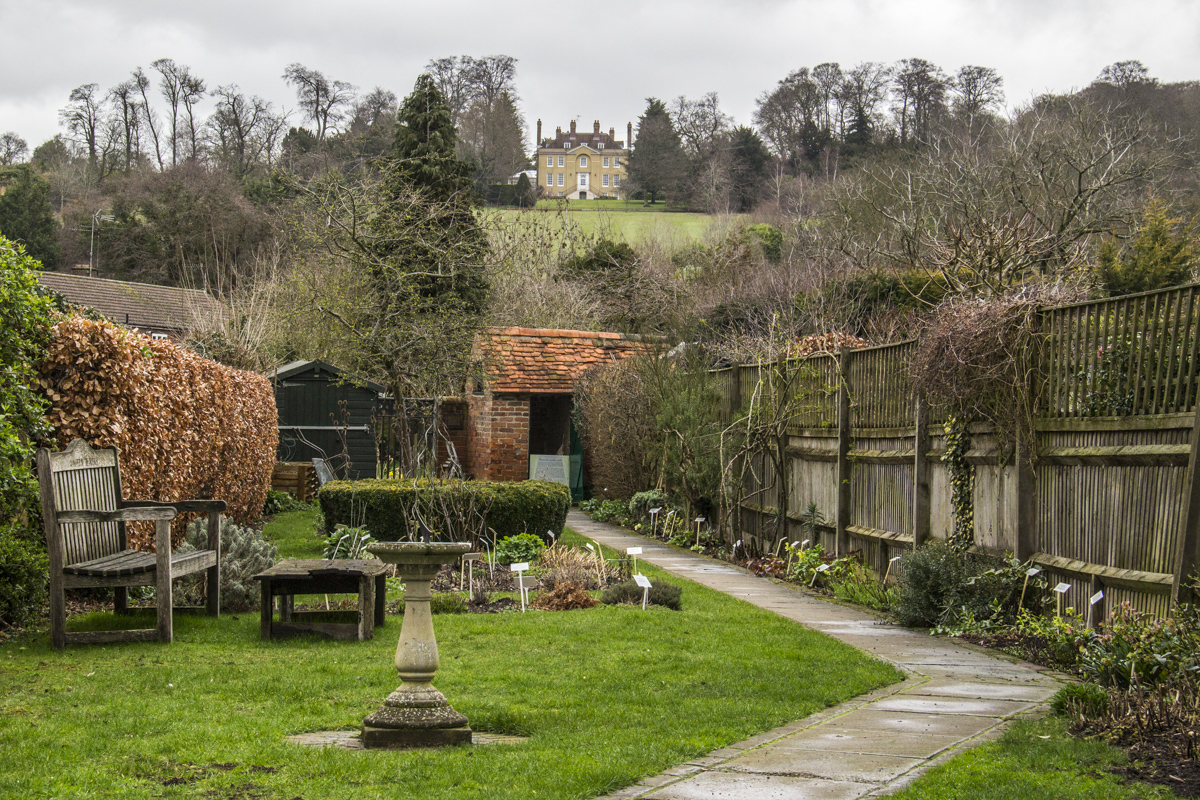 It is hard to imagine the little River Misbourne that flows gently through the town, skirting the playing fields and Pondswick was once the sole source of power here until electricity. Until the last one closed in the 1930s three mills operated on its banks. It also supplied water for the town’s brewery and for tanners further downstream. The town is now devoid of any industry. The last, the Goya perfume factory, that used the same buildings as the town brewery, closed in 1985. The building, known as Badminton Court, has been converted into apartments. The old workhouse, named after its architect George Gilbert Scott is now a desirable residential development. The Town Mill is an impressive private house close to the river which previous owners once damned to use as a private swimming pool. Those were the days! 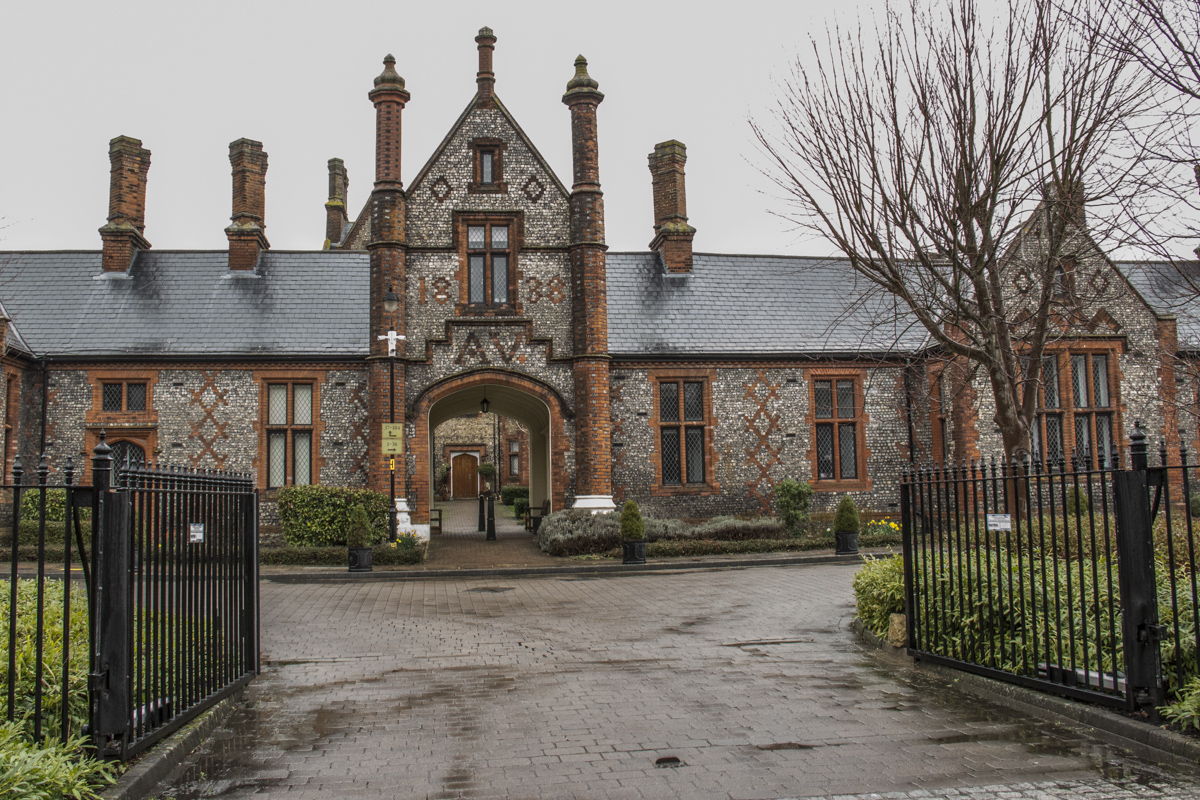 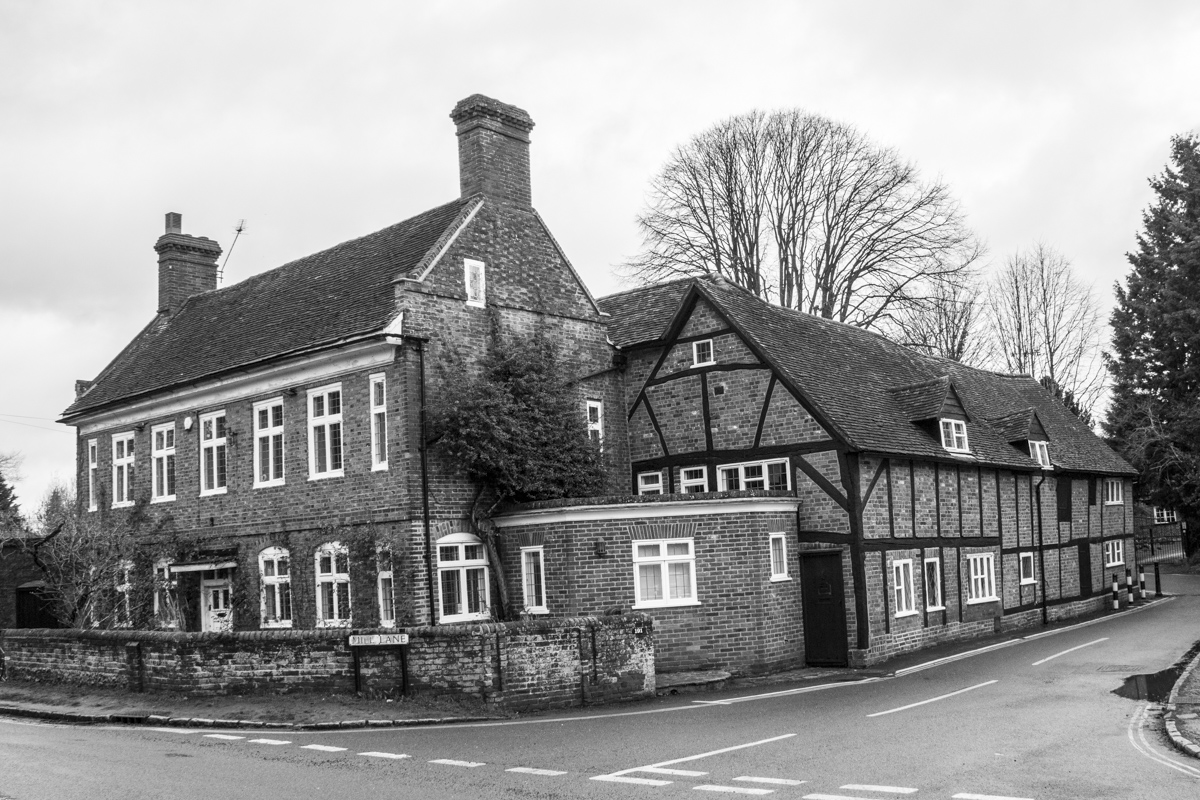 The Town Mill in Old Amersham