A Taste of the Real Kenya

Before I flew home from Nairobi Airport I bought a large tin of Kenyan coffee. Every morning, relishing the richness of the aromatic Arabica bean, I imagine I am back there again.

Coffee was first introduced to Kenya in 1893 but it was fifty years before coffee production was subject to regulation. Before that many farmers, mainly European established farms to grow coffee using local labour. One of them was Karen Blixen, a Danish author, who moved to Kenya in 1917. The bungalow where she lived, ten kilometres from Nairobi city centre, is now a museum. Built in 1912 this bungalow represents a different era. When Karen Blixen lived here it was the farmhouse for her farm where she struggled to make a living growing coffee. This building achieved world renown following the release of the autobiographical film Out of Africa in 1985. It was opened as a museum in 1986 and offers a welcome break to visitors on their way to the Masai Mara National Reserve. I was heading that way myself – to one of the conservancies that have been established to preserve the wildlife – Enonkishu Conservancy. 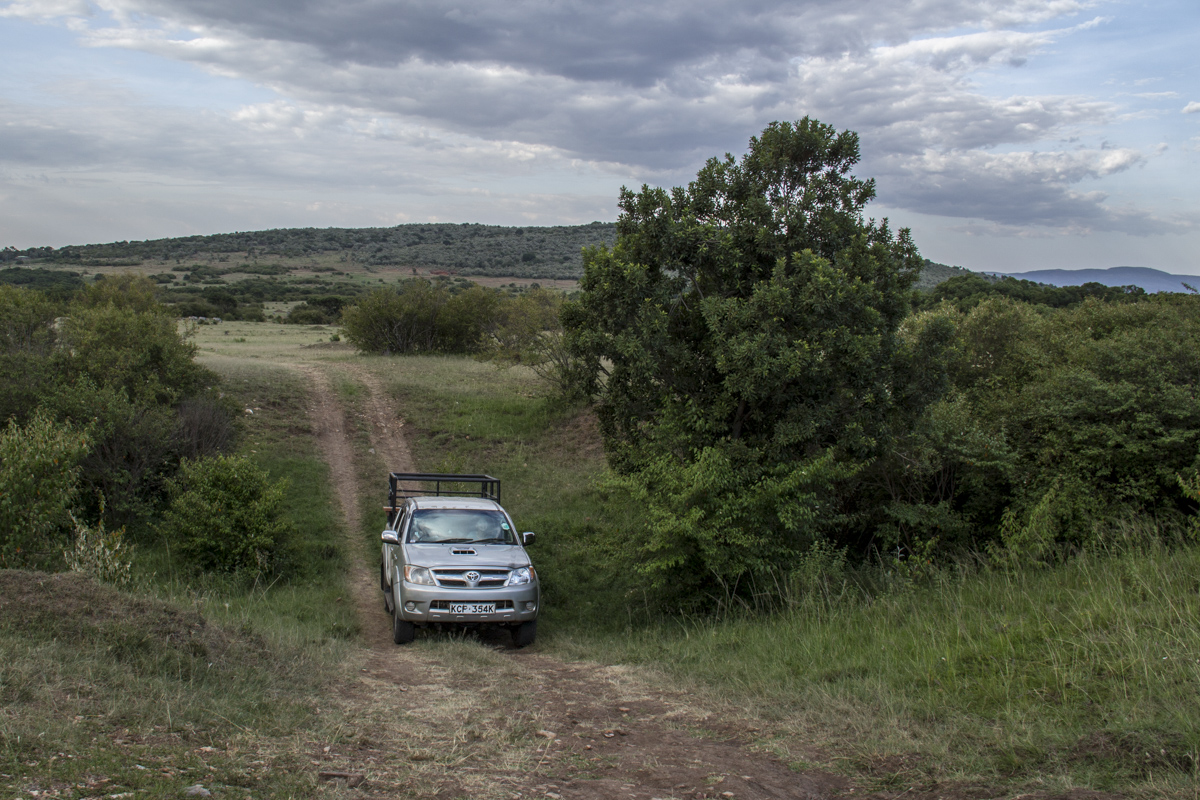 Soon after leaving the outskirts of Nairobi I was riding high on the Mai-Mahiu to Narok road perched on the escarpment of the Rift Valley. This historic road was built by Italian prisoners of war during the Second World War. The locals, appreciating the beauty of this area (and also the opportunity to indulge in some profitable trading) have established stalls by the roadside. I enjoyed the bizarre fusion of blazing sunshine and fur hats for sale. As the cool breeze stirred the damp strands of hair around my face I could only marvel at the magnificent view below me. The Rift Valley extends further than the eye can see – into neighbouring Ethiopia – and is the oldest and best defined rift in the world. 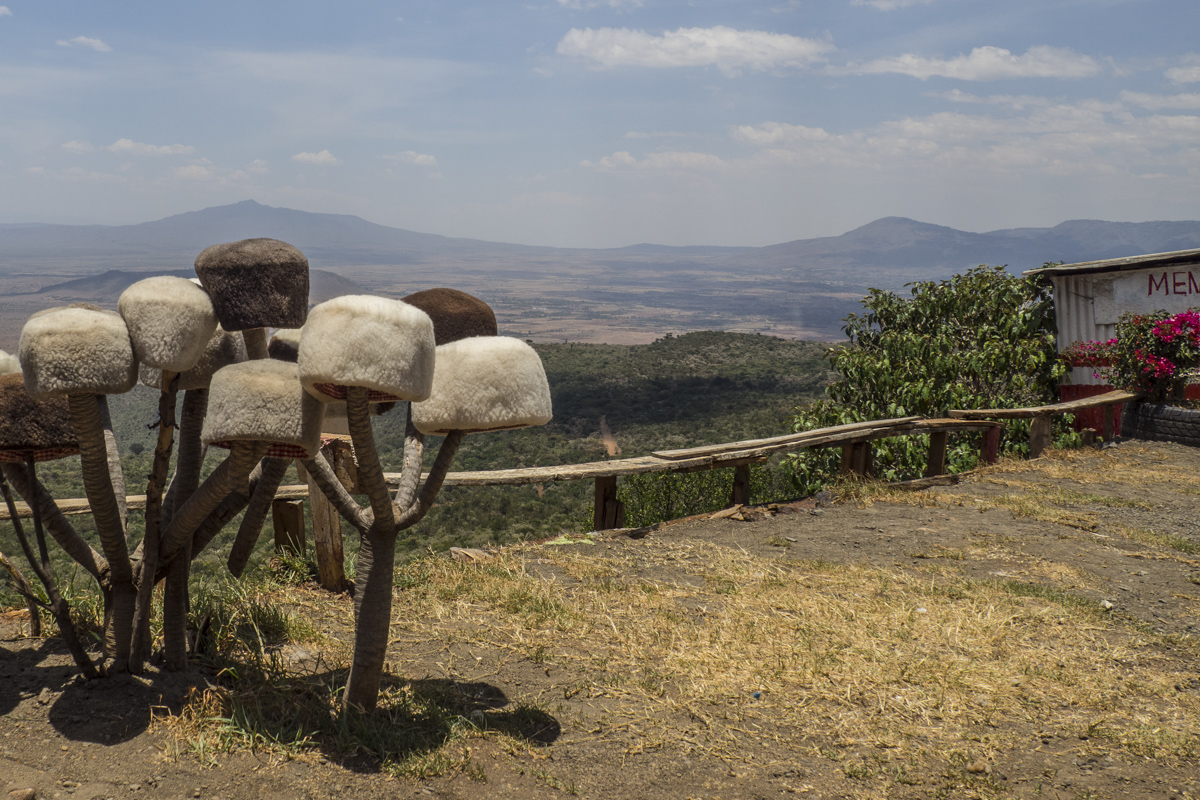 Fur hats for sale on the Rift Valley escarpment in Kenya

As we swoop down towards the plain below us we pass a monument to the Italians’ dedication to worship. The constructors of the road surmounted many challenges to build the Mai Mahiu Catholic Church. Also known as the ‘Travelers Church’ it was built in 1942 and it is the smallest church in Kenya. Take time to pause here and view its pretty interior. 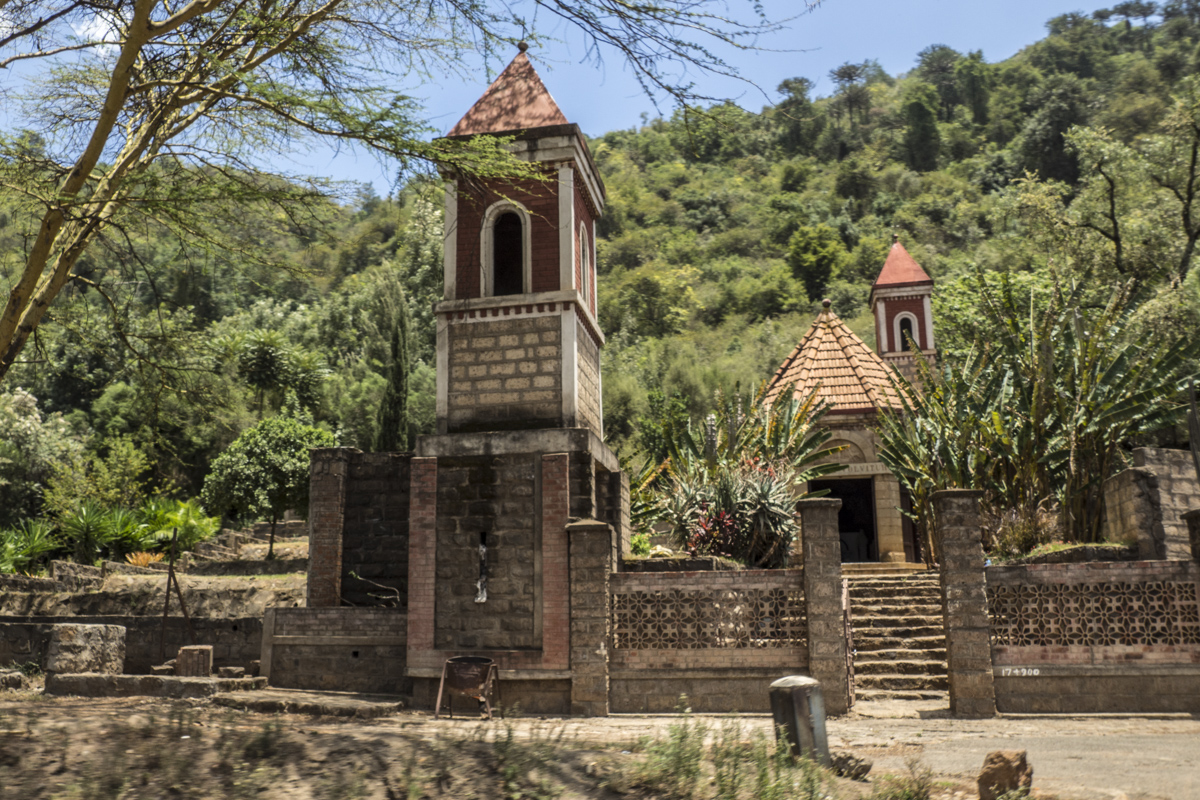 To either side of this road I was treated to snapshots of life in agricultural Kenya. Large tractors trundled along it and are regularly subjected to impatient hooting from the mini-buses that operate local services. 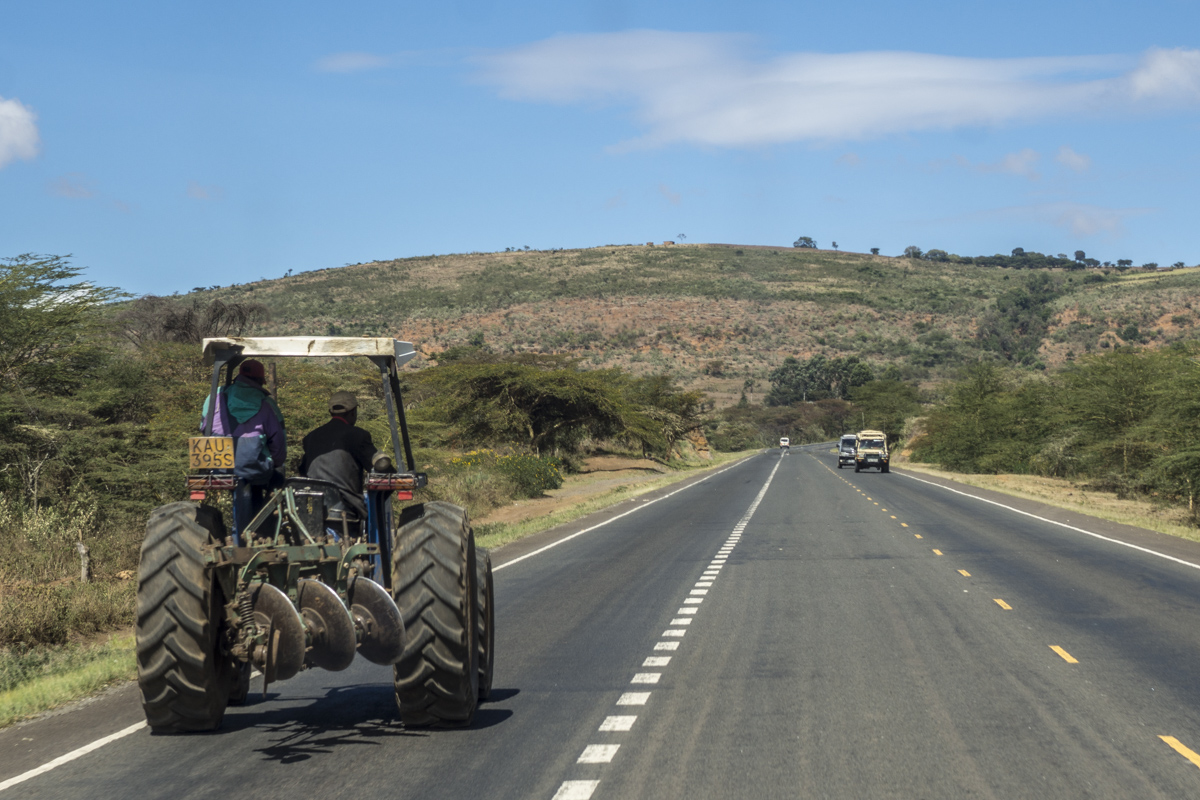 A tractor trundles along the Mai Mahiu Road in Kenya

As this road is still the only route between Nairobi and Narok lorries grinding up the steep sections slow everyone down but also offer a good opportunity to record life as it is lived here. My request to stop and take a photograph of a woman working in the fields is granted. When I ask for permission to take a photograph my subject queries (through my driver) why I find this daily task worthy of my attention. She is no doubt unaware that tilling the land by hand is a practice that was abandoned many years ago in my country. Despite her misgivings permission is granted but as we move on she is still muttering in wonder to herself. 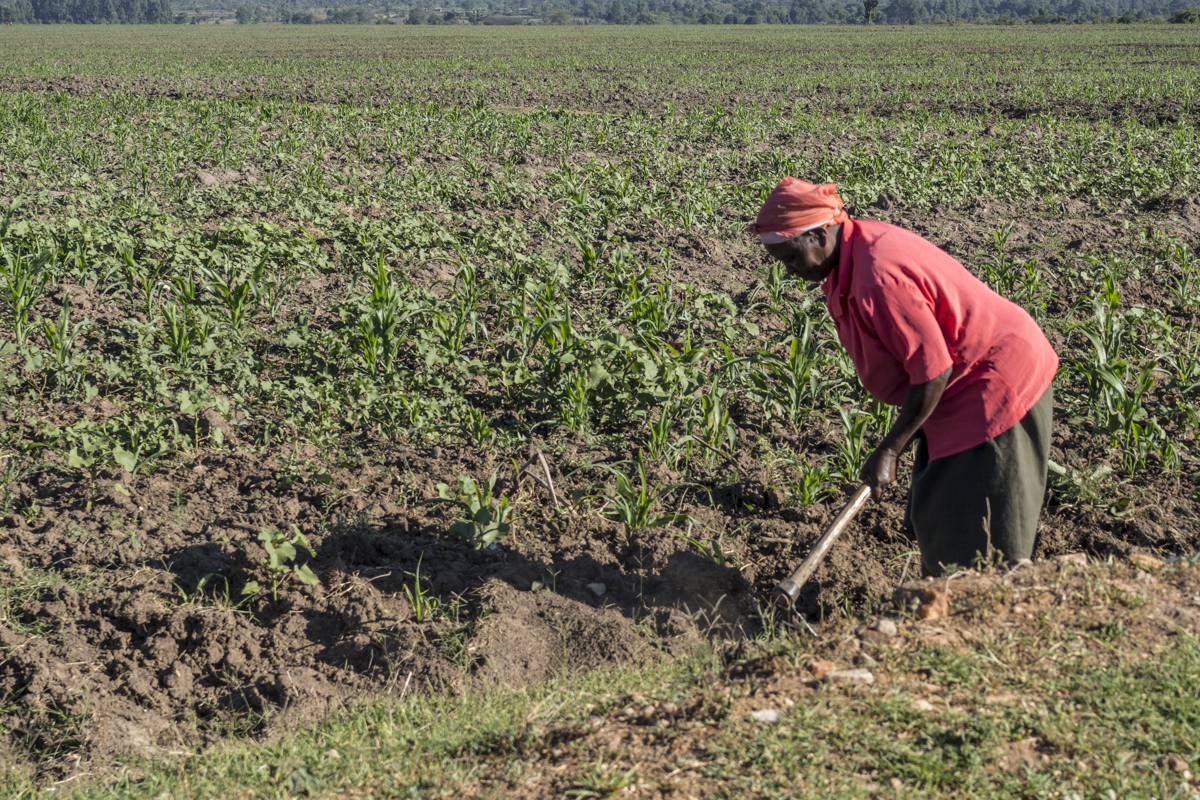 Working in the fields in Kenya

Children, impeccably neat in their smart school uniforms walk along the roadside on their way to their first lesson. Primary education in Kenya is free and compulsory. Secondary education is not. My journey has taken me past several private schools securely encompassed by high brick walls. Many children have to attend boarding schools in order to get a good education. Although secondary education is subsidised by the government parents still have to pay for this and some find it beyond their reach. 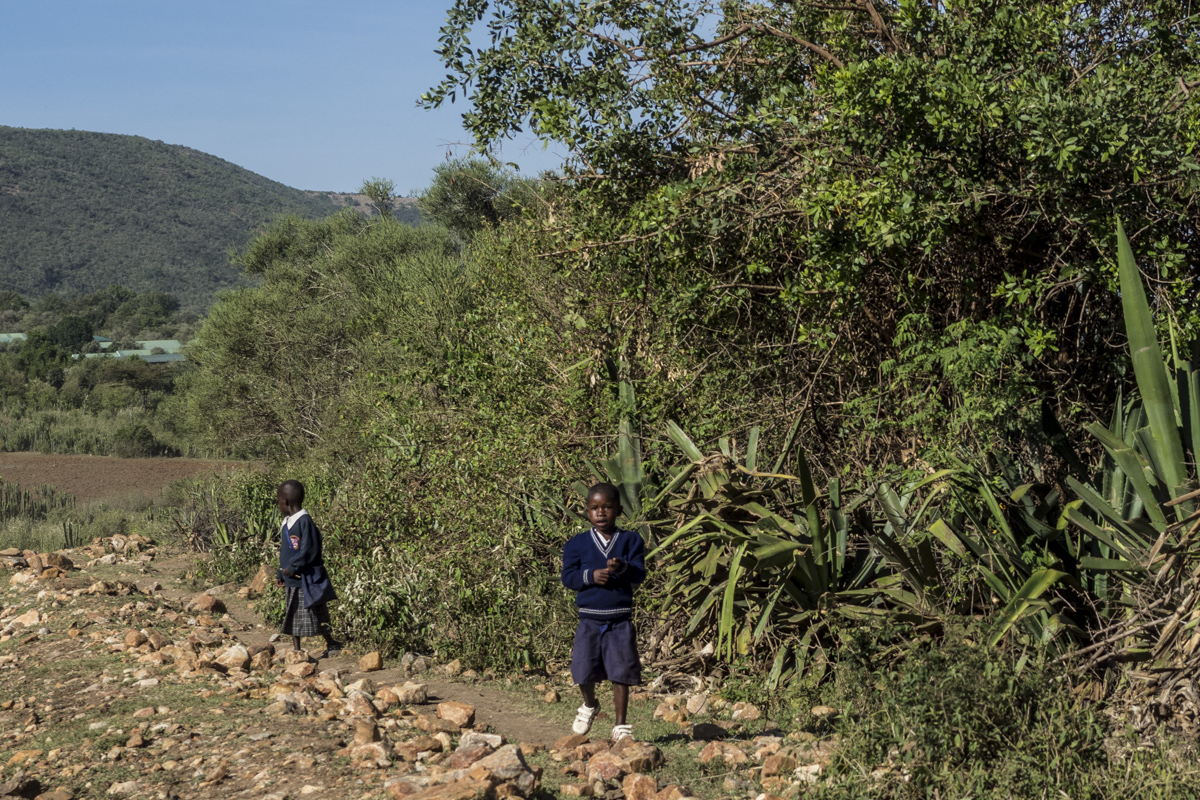 The Mai Mahiu – Narok road is subject to extreme climatic conditions including heavy rainfall that sometimes sweeps away whole sections resulting in road closures and long delays. This issue is currently being addressed through road and railroad building programmes being undertaken in collaboration with Chinese construction companies. I passed two major projects as I travelled this road and saw for myself the changing face of Kenya. 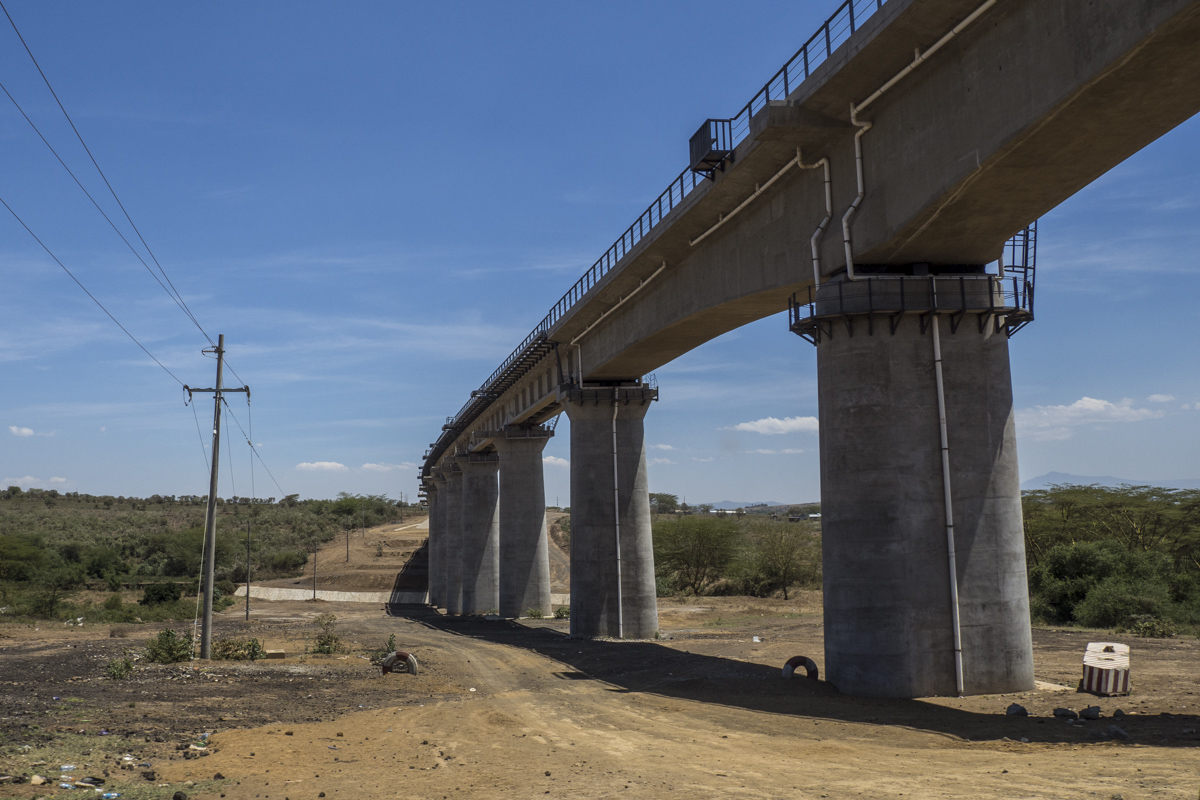 Construction of a new railroad in Kenya

After the commotion of road construction, I was able to enjoy some more charming images of life in Kenya. I passed through small settlements, their ramshackle buildings lining the road. Some professed to be hotels, others shops but none of them looked open. Possibly, because it was Sunday and everyone was in church. I had seen many places of worship (some with impossibly long names painted on corrugated iron roofs) close to the road. Worshippers in their Sunday best were spilling out of some of them. Stalls piled high with fresh produce, some apparently unattended were a regular occurrence. My driver assured me that if a prospective customer did pull in the proprietor would soon appear from the cool shade behind his stall. 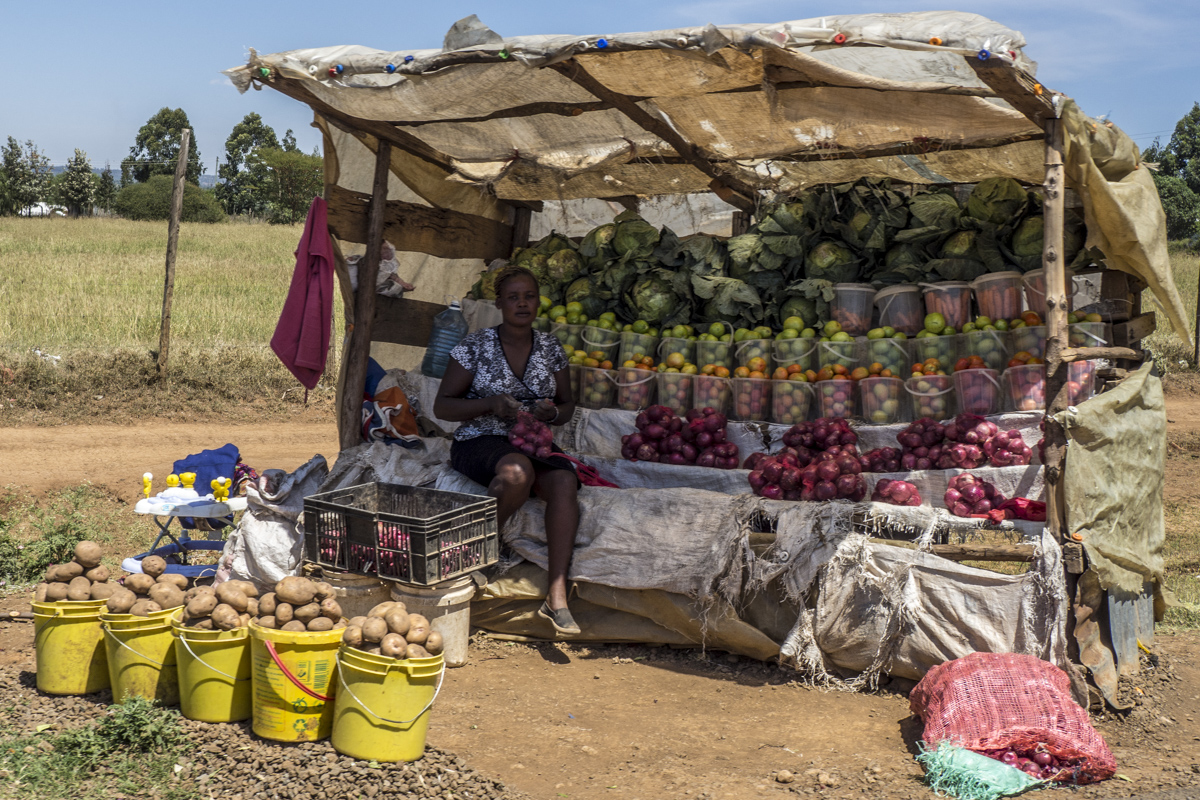 Fresh produce for sale by the Mai Mahiu Road in Kenya

It was good to have a break when we arrived inNarok the capital of Narok County. This major commercial centre sprawls along the main road and is named after the Enkara Narok, the river that flows through it. By then I was ready for a good coffee and a chance to check my emails. I was very happy when I found both at the Chilli Spot in the modern Oltalet shopping mall. Close to the mall is the Narok Museum or the Maa Museum. This museum was set up in an old Community hall. Its aim is to preserve the culture of the Maasai people who form the majority of the population in the town. Narok is generally considered to be the gateway to the Masai Mara National Park but for those who are interested in the Maasai culture and traditions it is worth lingering here for a while. 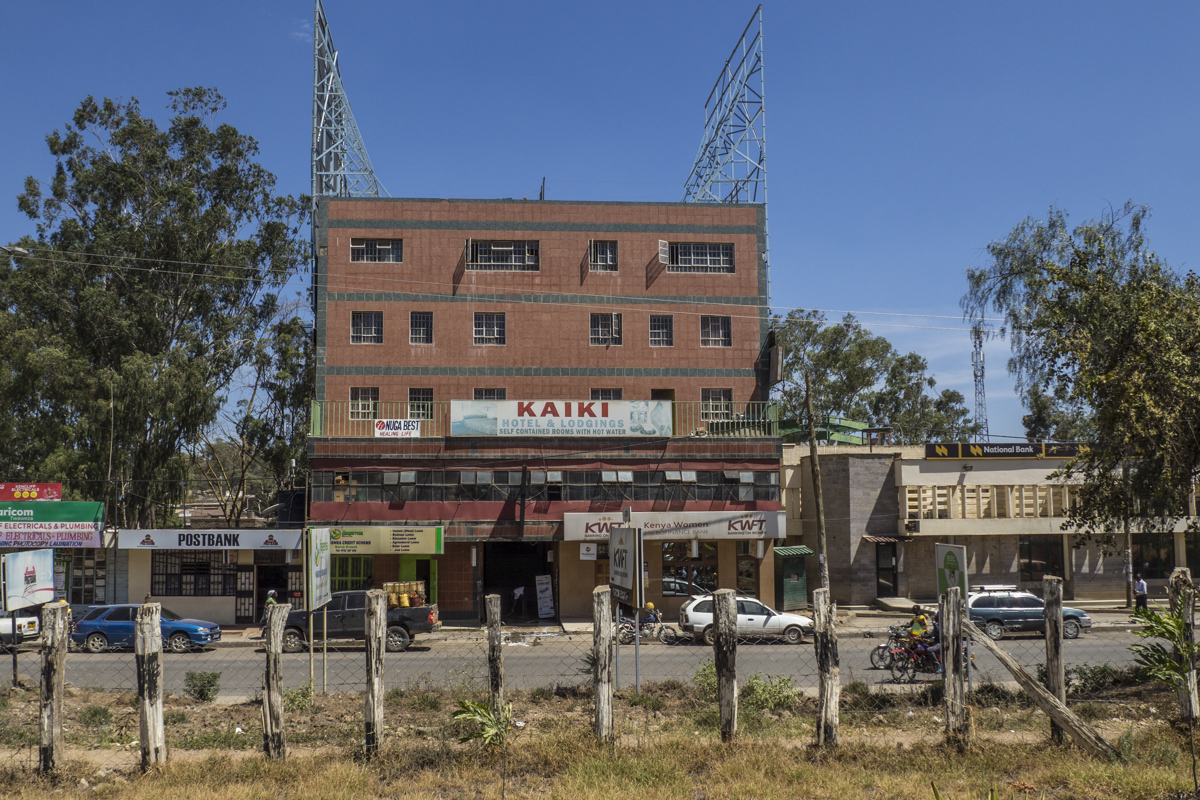 The main street of Narok in Kenya

After leaving Narok we turned into the Masai Mara National Park. Forty minutes later I disembarked my comfortable bus reminiscent of public transport in a 1950’s film and climbed aboard the four by four vehicle in which I would complete the final stage of my journey to the Enonkishu Conservancy Conservancy. This conservancy is an ingenious blend of conservation and commercialism. Masai cattle and African wildlife inhabit six thousand acres of land leased from local landowners for this purpose. Naretoi, one thousand acres of land in private ownership is being developed as an estate for holiday homes close to nature. Within this estate is the boutique hotel, House in the Wild where guests can enjoy the tranquillity and nature of the estate that includes a water hole and an airfield. 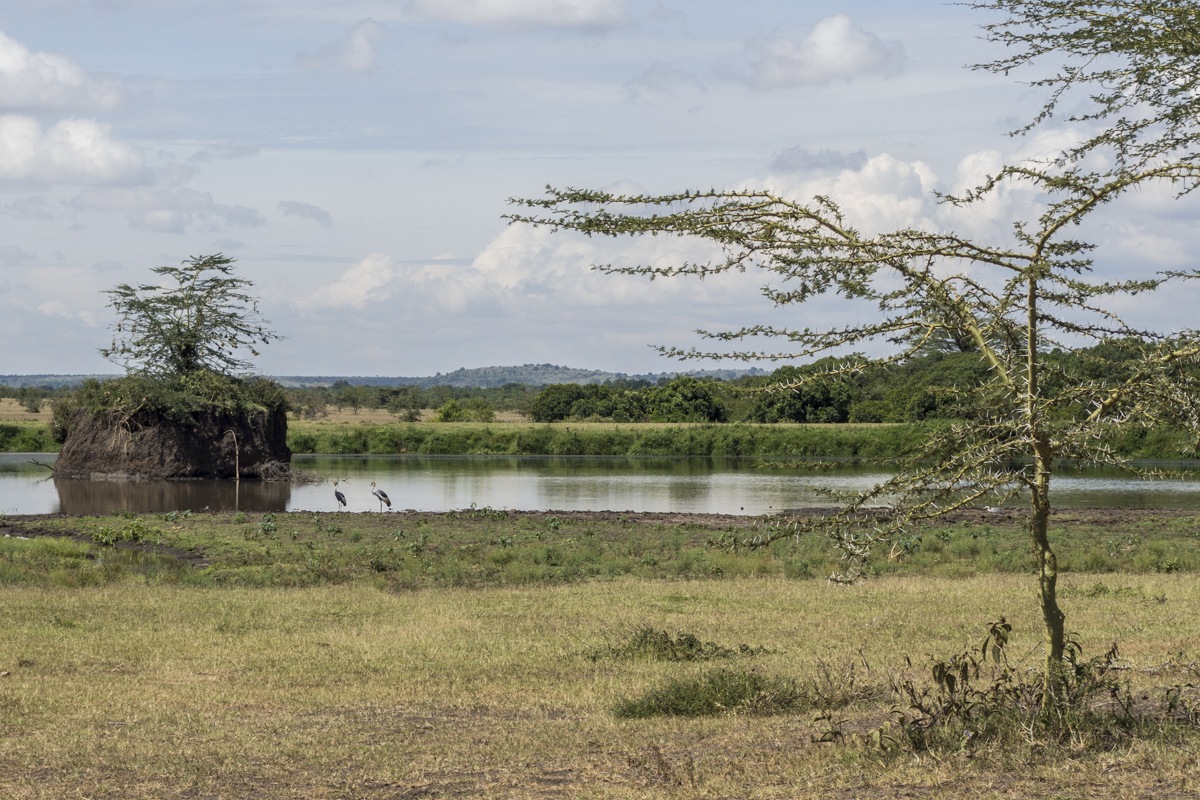 Naretoi, the private estate in the Enonkishu Conservancy in Kenya

The Mara Training Centre in the conservancy also offers accommodation, both bandas and tents. I stayed here for two weeks, in one of the tents. It was both thrilling and a bit scary falling asleep to the sounds of the African wildlife at night. My top taste of the real Kenya. 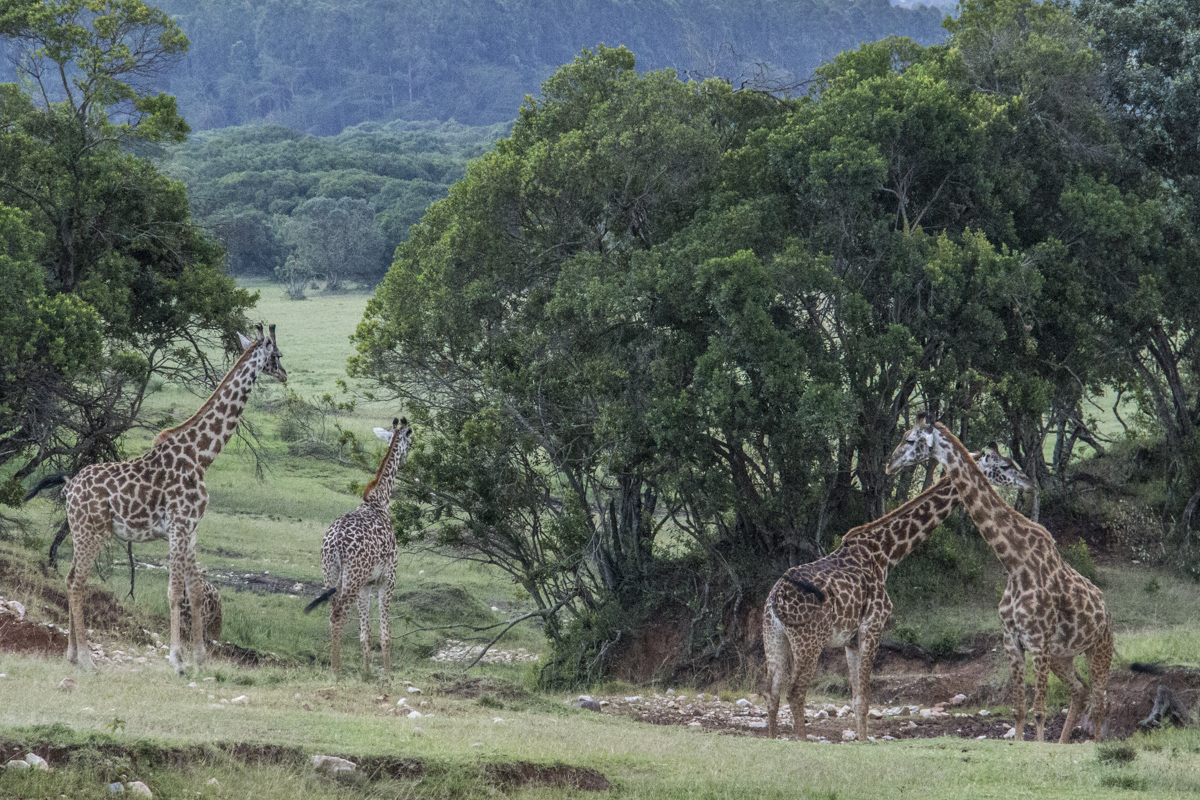 Game drive in the Enonkishu Conservancy in Kenya

Getting to the Enonkishu Conservancy

This conservation experience was organised by Biosphere Expeditions a global company who set up conservation projects in many different destinations. I flew on a direct scheduled flight with British Airways to Nairobi. I stayed at the Margarita House Hotel which was the assembly point for the whole group the following morning. We were then transported from there to the Enonkishu Conservancy 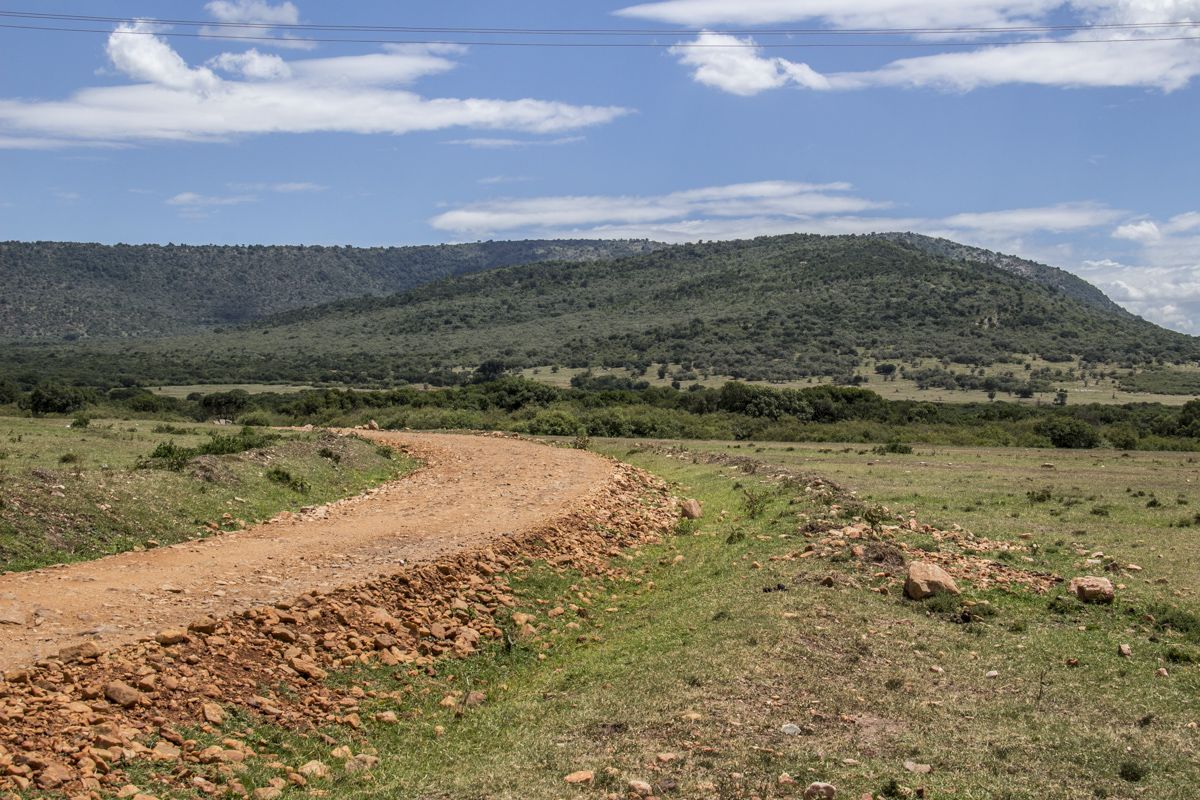 The road to the Enonkishu Conservancy in Kenya