Perched on the top of St Catherine’s Hill the colourful jigsaw that is the historic town of Winchester was spread out below me. This jigsaw comprises its waterways, ecclesiastical buildings and the playing fields, gardens and buildings of Winchester College, the oldest public school in England. Even the hill I had just climbed belongs to this college. Every summer and autumn term the students of the college, the Wykehamists, assert the right of ownership through the traditional Morning Hills one of the many ceremonies connected with the college. 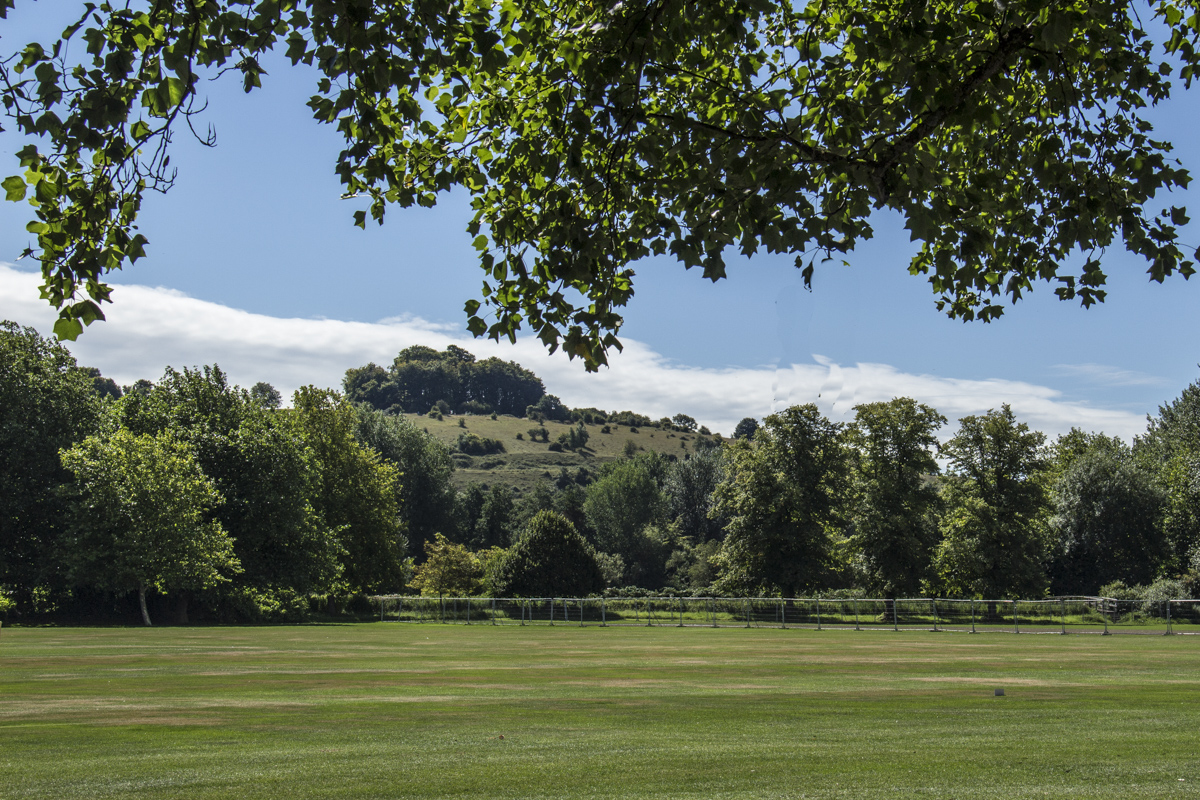 Why Wykehamists? Winchester College in Winchester in Hampshire, England was founded by William of Wykeham in 1382. Wykeham came from a humble background but thanks to a good education he served as the bishop of Winchester and also Lord Chancellor of England. As a very wealthy and important man and decided to give back his own good fortune by founding a school in Winchester and a college at Oxford University. His aim was to educate poor boys who would go on to attend New College at Oxford and provide the church with educated men dedicated to God. Today, this school continues to educate boys. Its purpose is to provide a classic education. It still uses some of the original buildings. Members of the public can book guided tours of the medieval heart of this school – a fascinating experience. 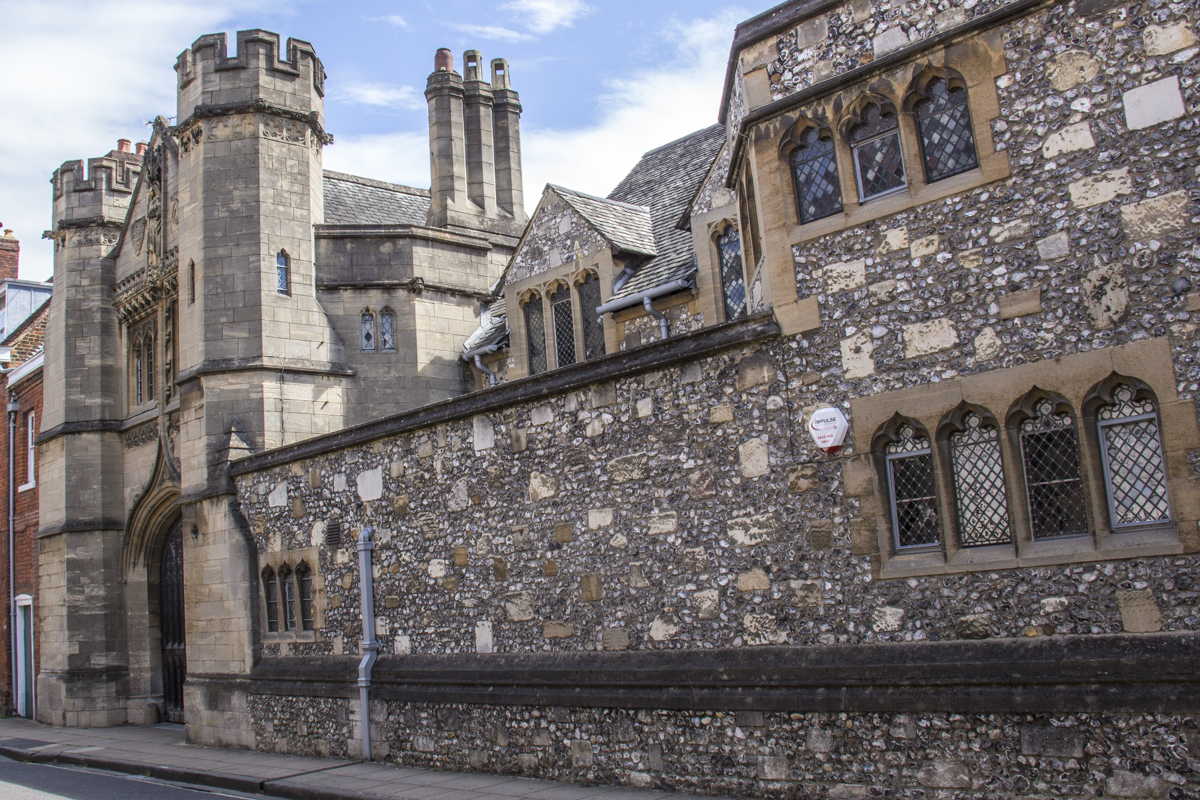 I made my way down the hill and into the centre of Winchester to join one of these tours. When the college was built it was outside the medieval city walls as this was the only place where sufficient land was available. Now most of its many buildings are in the heart of the town. My tour with Angela, a college guide, started in the outer courtyard. The buildings surrounding this courtyard were constructed between 1392 to 1394. They were built around a courtyard for defensive purposes as the college was established a year after the Rising in Winchester, a big rebellion in the town. Designed to be self-sufficient the buildings in the outer court included accommodation for servants, a granary, a bakery and a brewery. As the water was not safe to drink in those days everyone drank ale. The brewery ceased operations in 1904. The high chimney in this courtyard was designed to let the fumes from the brewery escape into the atmosphere rather than gathering in the courtyard. Only male servants were allowed to work and live in the college but they could marry although their families had to live outside the college. Only one female servant was allowed and that was the washerwoman who had to be old and ugly. 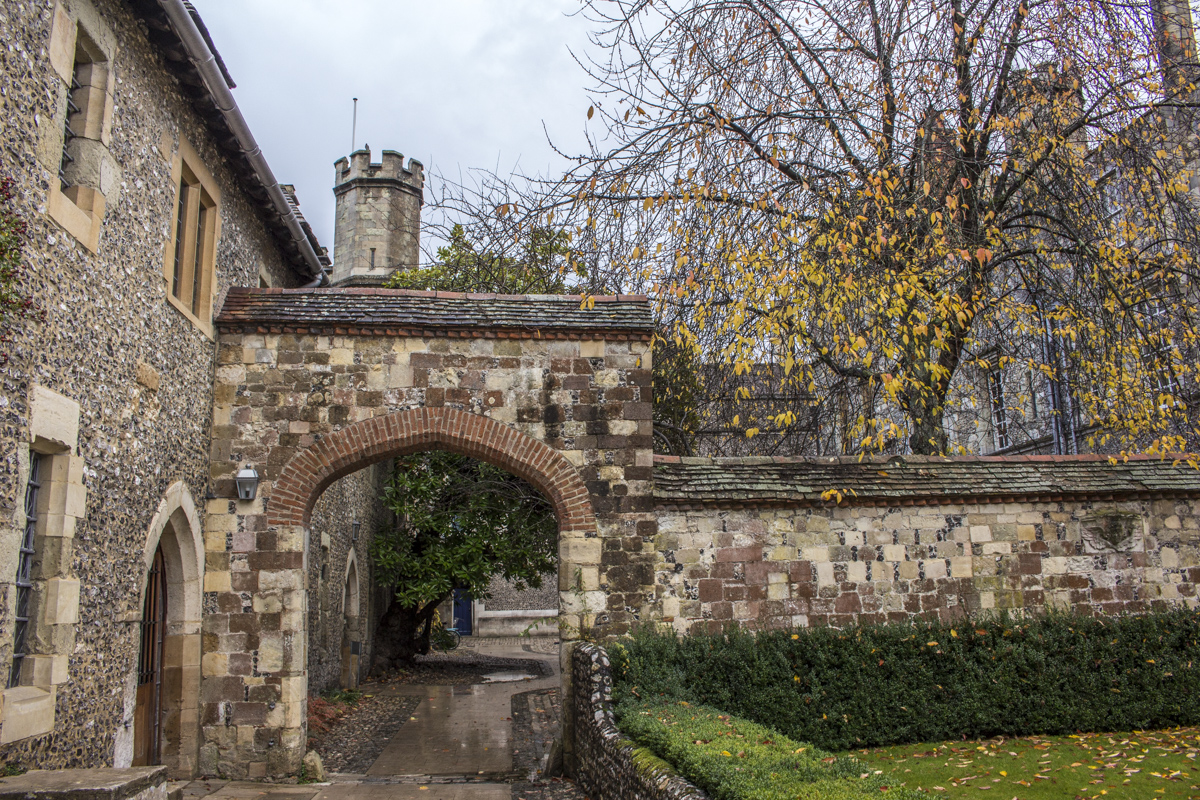 The Outer Courtyard of Winchester College in Winchester, Hampshire, UK

The next courtyard, Chamber Court, was the heart of the medieval college community – an all-male, celibate community. These scholars had to wash in the cold water of the stream that runs alongside the college. It was designed to house the seventy scholars who attended the school. Today it is still the home of seventy scholars who live there with the staff who look after them. But now the total number of students at the college exceeds six hundred and the others live in ten residential buildings around town and other buildings have been added over the years for teaching and recreational purposes. Students from all over the world can apply to attend the college. There is one common entrance exam for all boys wanted to attend the college and a separate exam for those aspiring to be one of the seventy scholars. There is also a means test for those whose parents cannot cover the fees and some of the students are fully funded by the college. A gown is the only uniform the scholars have to wear but they must dress smartly on special occasions. 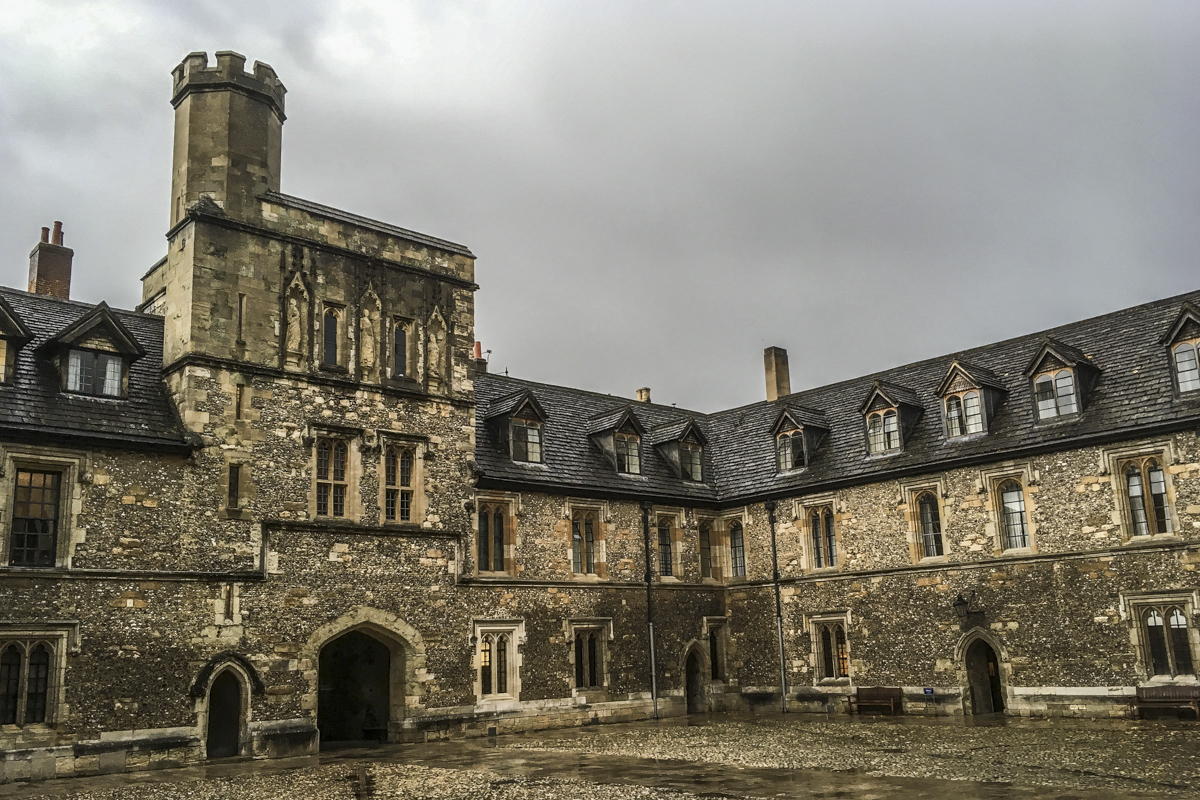 There are two of the original college buildings in this courtyard, the fourteenth century Gothic chapel and the first classroom. Daily services are still held in the chapel and the Sunday service is compulsory although there is no religious requirement. The chapel has a wooden roof, an early example of a wooden vaulted roof, because it stands on soft ground. Inside the chapel the wooden fittings have been replaced several times but some seats survive from the fourteenth century. The stained glass windows are not the original windows but accurate copies that replaced the originals in 1820. The old glass was thrown away but some of it was later recovered and is now on display in the chapel. As Wykeham wanted polyphony in the college choir his original foundation included sixteen young boys known as Quiristers whose duty it was to sing the soprano parts in the choir. This tradition is still upheld today but since 1966 the Quiristers have been educated at the Pilgrims School. 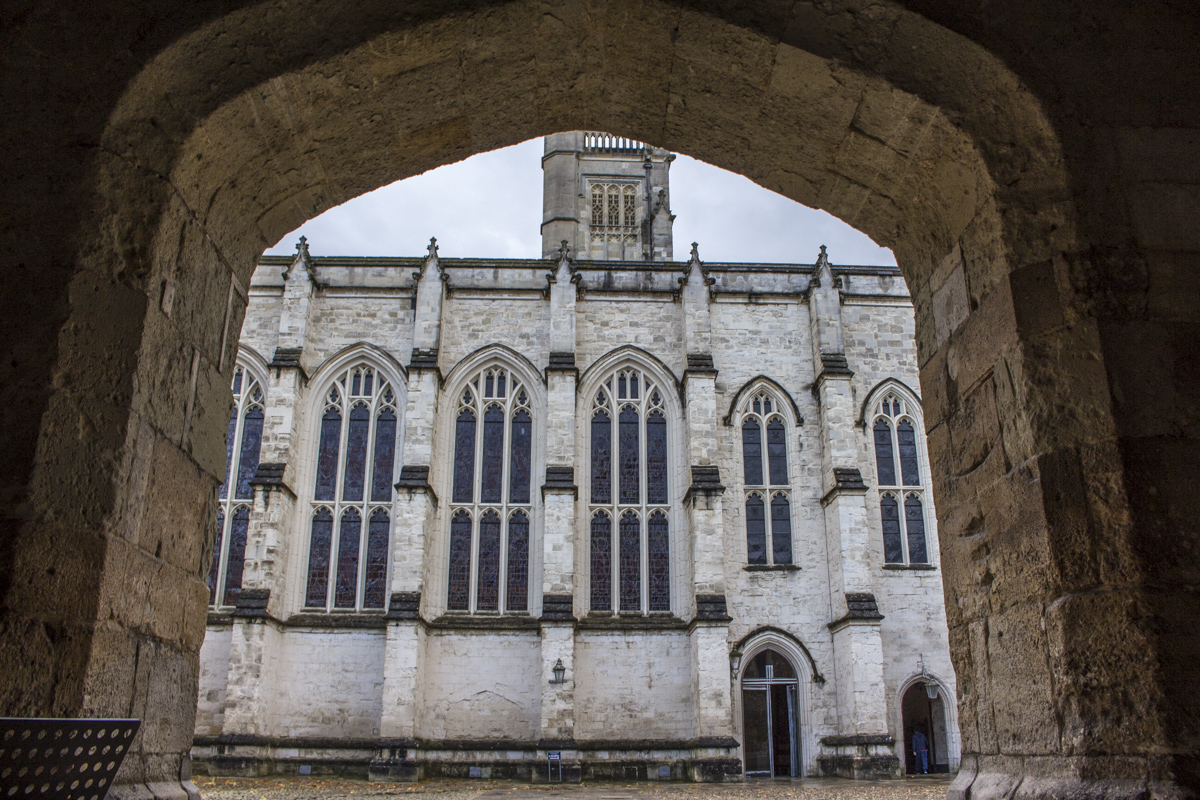 The Chapel at Winchester College in Winchester, Hampshire, UK

Students and staff still dine in the Medieval dining hall, College Hall, which retains its original character. The long tables and benches that surround an open space in the middle date from the 1600s and are nailed to the floor so they cannot be moved. Extra furniture can be placed in the empty centre for special occasions. A portrait of Wykeham looks down on the diners. Trenchers, medieval wooden plates, were used until well into the twentieth century and the scholars can still choose to use them today. The stained glass windows date from the 1920s and were created by the art teacher working in the college at the time.

Around the third courtyard there is a cloister that the boys can use for silent contemplation. The long, wide corridors are ideal for exercising in wet weather and the holding of lessons in hot weather. It is also place of commemoration and graves. Graffiti decorates the walls as the boys liked to leave their mark and some of them even employed craftsman to do it for them. In the centre of the cloisters is another form of commemoration, the chantry chapel where prayers are said for the dead.
We followed a passageway from the cloisters into the medieval classroom. For teaching purposes, the boys would have been divided into groups which then used the corners of this room. This changed during the seventeenth century in the Wren style school when different classes where held in different areas of the Hall. The boys leant in silence and had to obey the rules displayed on the wall, in Latin. One board outlined these rules and a second board listed the corporal punishment for failure to obey these rules. 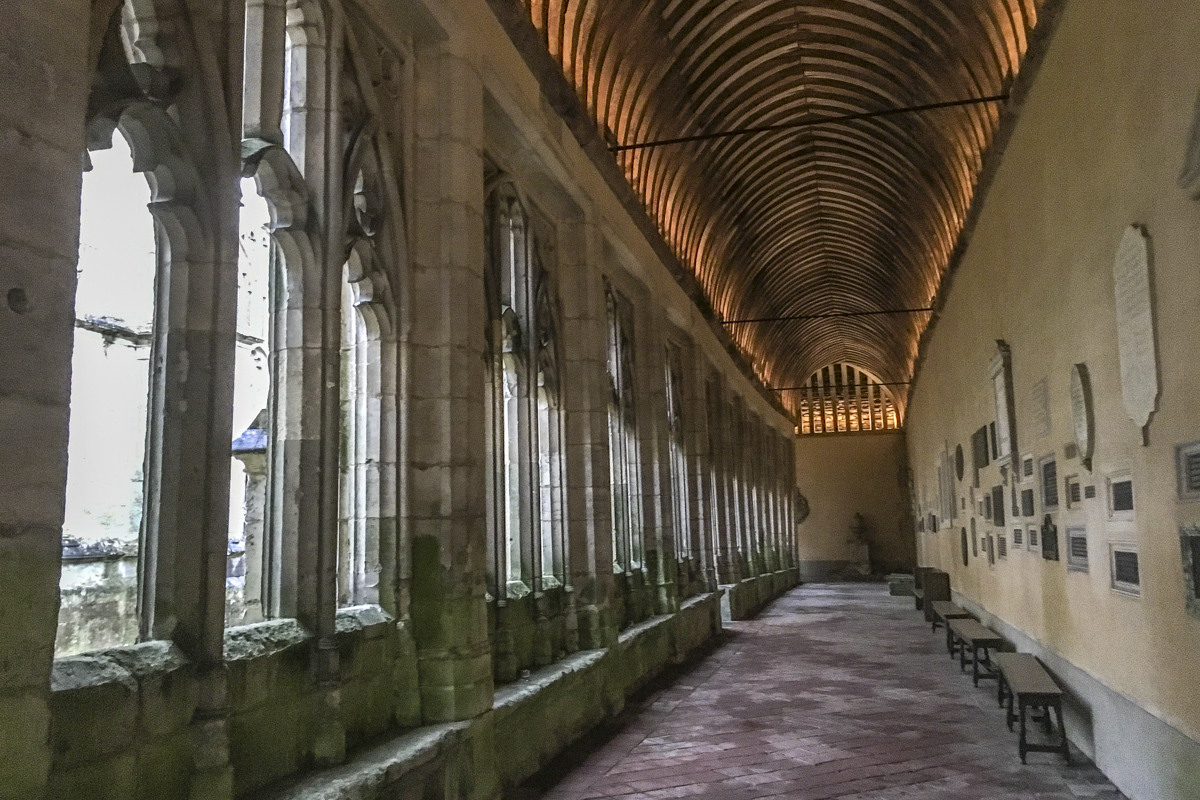 A passageway leads from the cloisters into the medieval classroom. For teaching purposes, the boys would have been divided into groups which then used the four corners of this room. This classroom was replaced by The School, a separate building, believed (but not proven) to be the work of Christopher Wren who was known to have been in Winchester when it was built between 1683 and 1687. The interior was the same as the medieval classroom and different classes where held in different areas of the Hall. The boys leant in silence and had to obey the rules displayed on the wall, in Latin. One board outlined these rules and a second board listed the corporal punishment for failure to obey these rules. Today the School is used as a reading room and examination room. 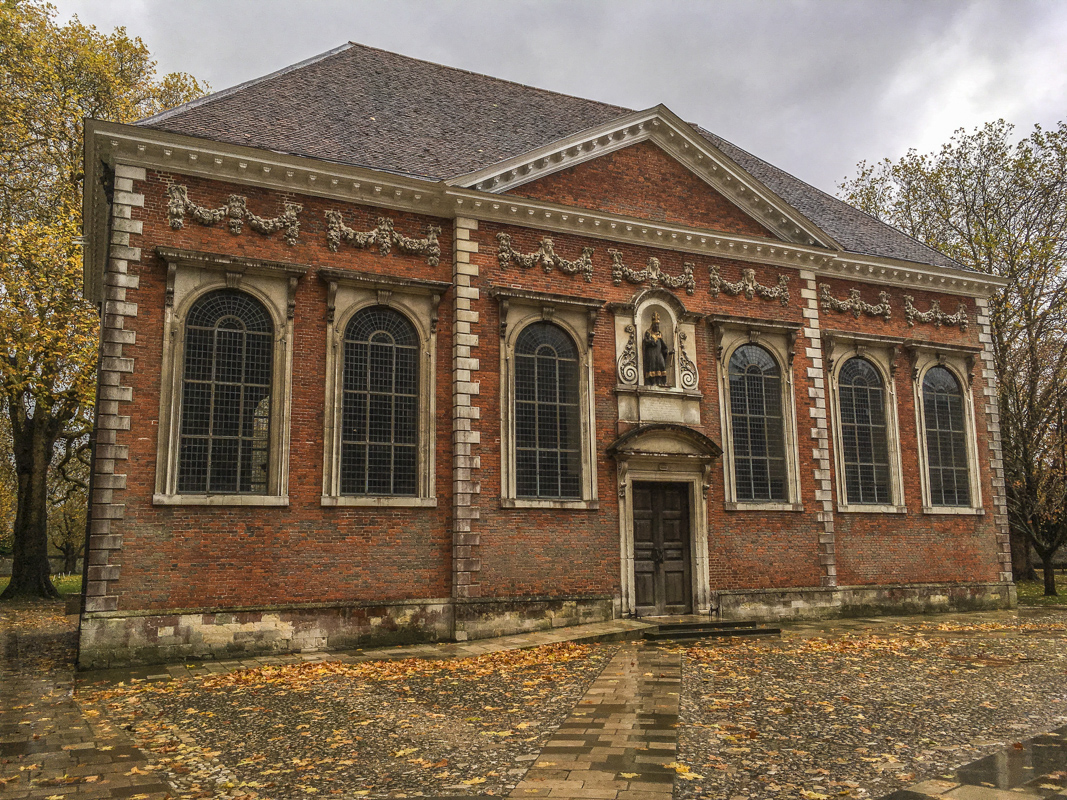 The School at Winchester College in Winchester, Hampshire, UK

When the tour finished I visited the Treasury in the old warden’s stables, which were renovated for this purpose. Built n the fourteenth century the stables were originally one open area. The upper floor, windows and hayloft were a later addition. The Treasury is used by the students but is also open to the public. Both the building and its contents are impressive. On display are some gifts to the college and some pieces collected by the college from all over the world for teaching purposes. 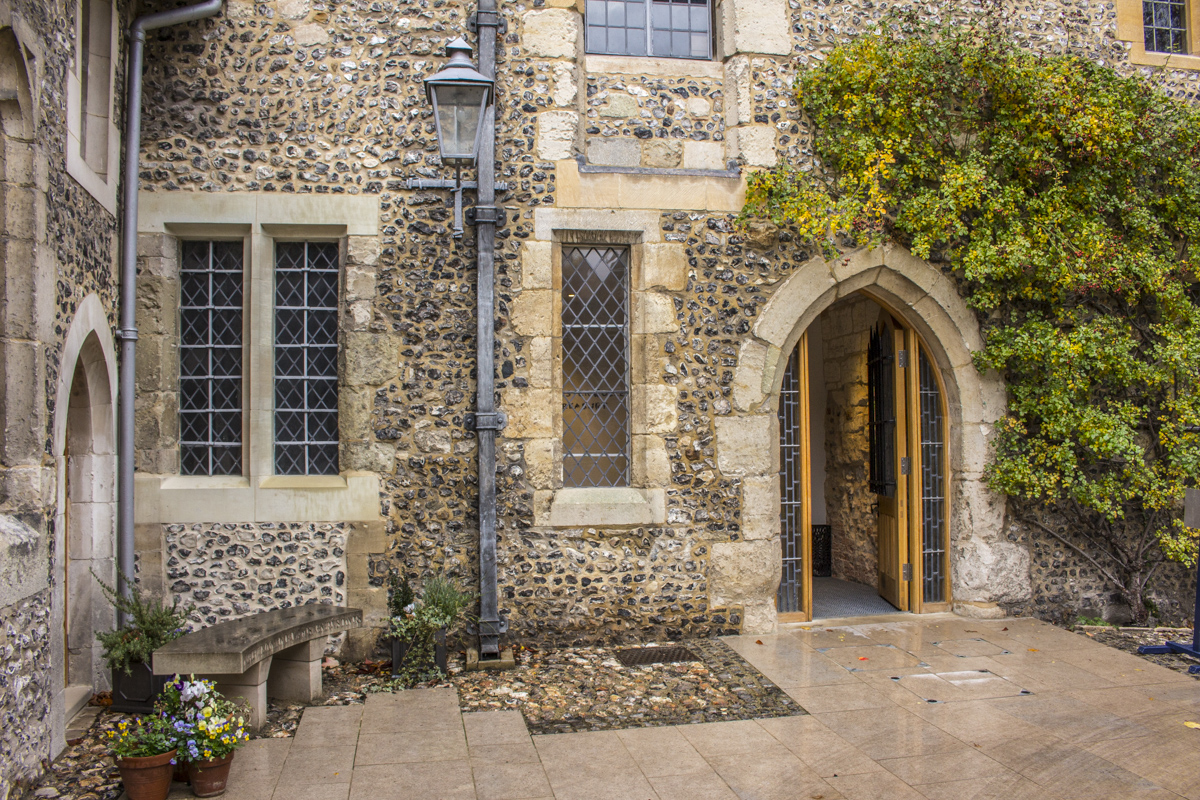 Entrance to the Treasury in Winchester College, Winchester in Hampshire, UK

This exhibition is beautifully laid out and it is a pleasure to walk around it. I was very impressed by the Victorian stained glass windows on the walls. These were discovered when the conversions was done. There is also a Jesse window in which Wykeham is represented twice as well as the master craftsmen who built the college. The Jesse window was the original representation of a genealogy.
The exhibits are changed once a term and the boys get involved in the choice of artefacts. They also exhibit here, for example a weather project they have been working on. The exhibition space has been cleverly designed to accommodate temporary exhibitions as well. 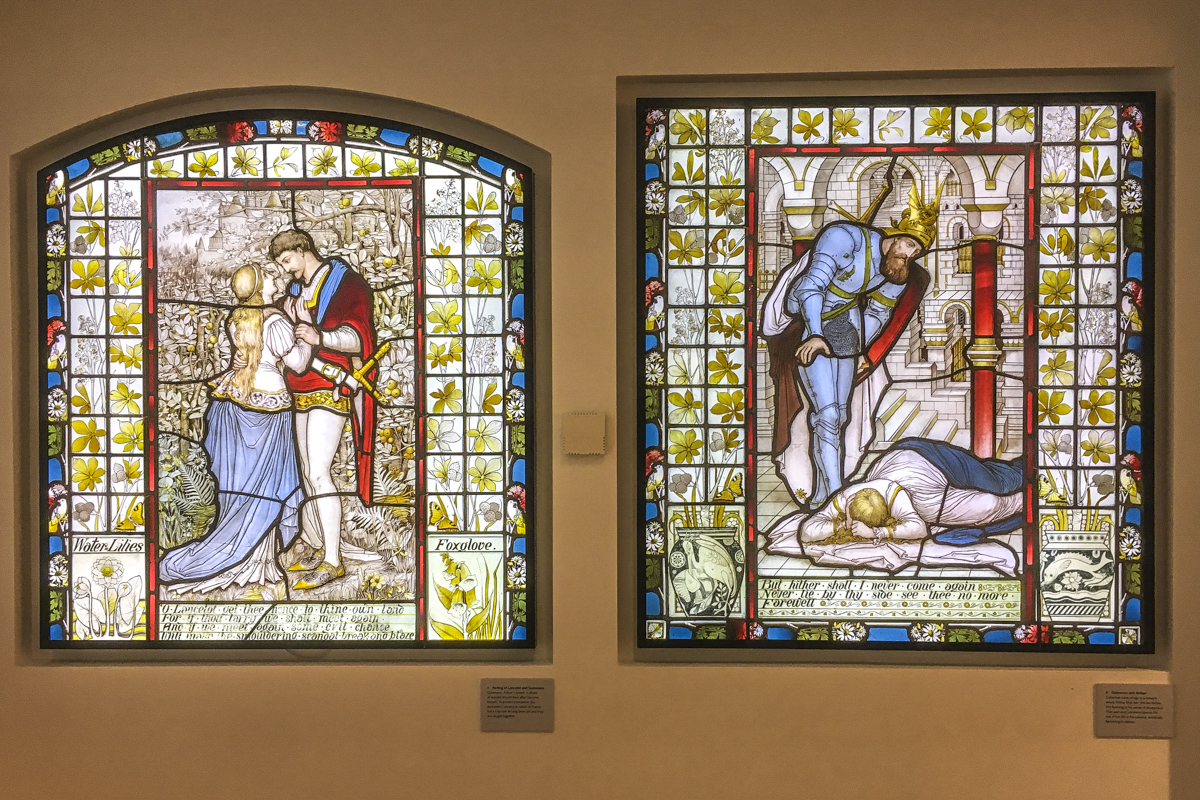 Winchester College is an integral part of the historic city of Winchester. The influence of Wykeham is reflected in the use of his name for the old coaching house, the Wykeham Arms, where old desks from the college furnish the interior. The college is yet another aspect of Winchester that was once the capital of England and a thriving commercial centre when it’s waterways were used for industrial purposes.