Some Highlights of Windermere-Bowness in the Lake District

The Cumbrian towns of Windermere and Bowness in the Lake District, have merged together to form one conurbation. Windermere, the newest of the two, embraced the arrival of a railway line in 1847 whereas Bowness, a long-established settlement refused to accept it. Today there is a train station in Windermere and ferries and pleasure boats depart from Bowness Pier on Lake Windermere so it is a happy union. I stayed in Windermere. I soon discovered that next to the parish church of St Mary was the start of an easy path to a viewpoint known as Queen Adelaide’s Hill. 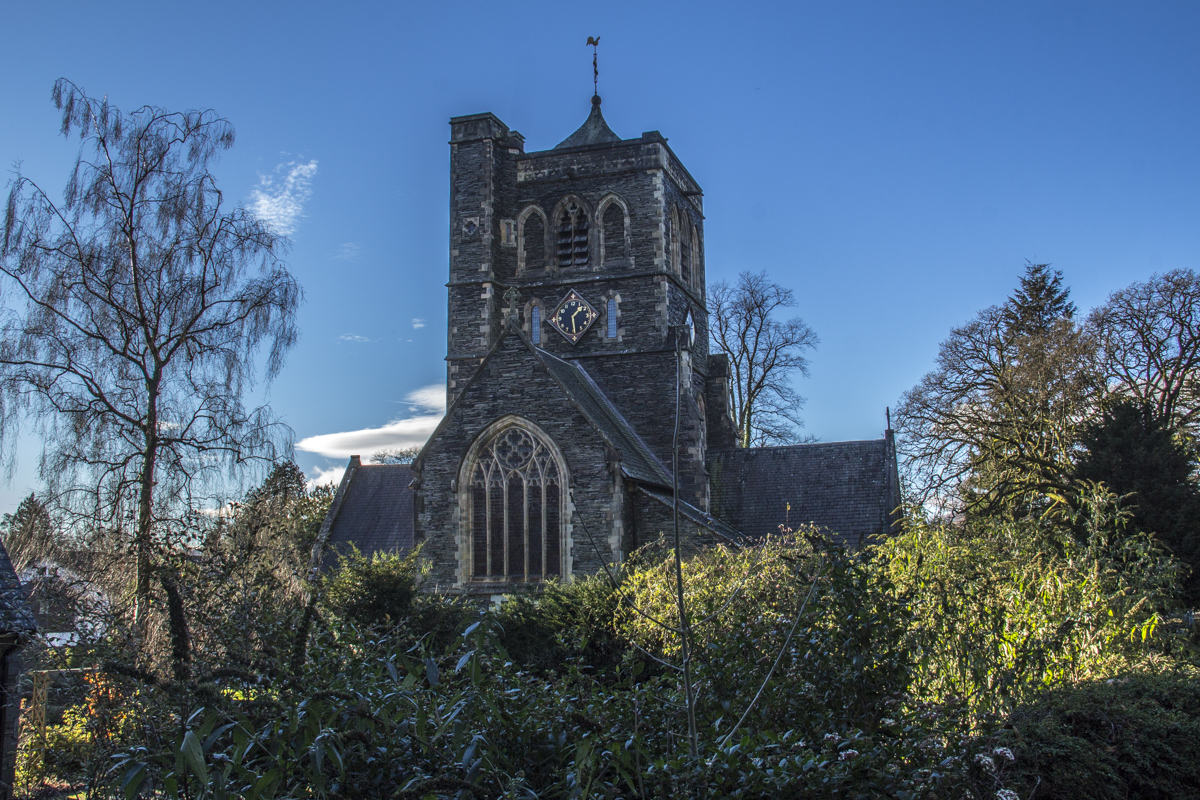 Church of St Mary in Windermere in the Lake District UK

I followed the path down the hill to the main road, crossed the road and went through a kissing gate onto to a track that led to the top of Queen Adelaide’s Hill. It was not too steep and I was soon at the top and looking down on Lake Windermere. A few curious sheep were my only companions. This hill is named after Queen Adelaide, widow of King William IV and the aunt of Queen Victoria after she visited Windermere in 1840. It is recorded that she and her party climbed this hill to admire the view. A plaque was placed at her point of landing on the shore of the lake. Queen Adelaide also gave her name to the city of Adelaide in Australia. At the bottom of the hill there is a path that goes through the National Trust gate and follows a stream called Wynlass Beck to the shore of the lake. This area is known as Millerground as it is believed that a corn mill once stood here. I did not linger long as my next objective was another view point, Orrest Head. 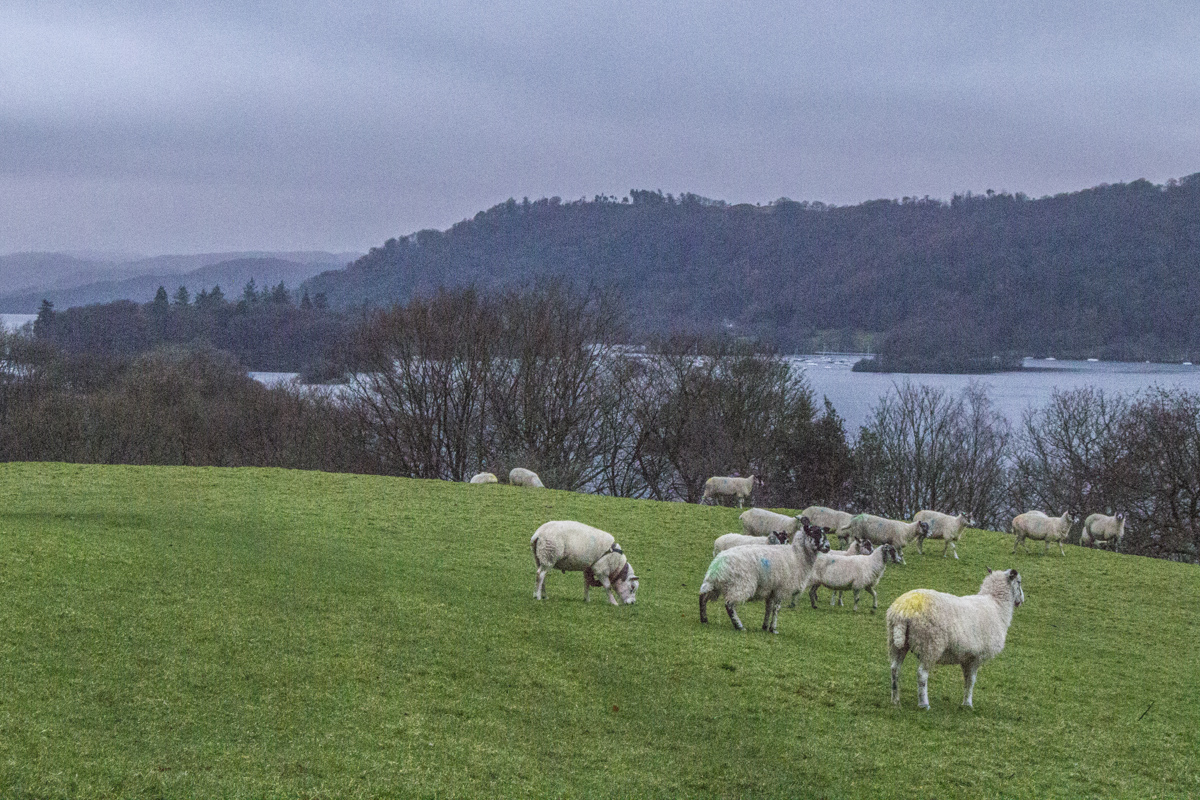 I had discovered that there were some beautiful gardens on the outskirts of Windermere at Holehird. Even better I could walk there via another view point known as Orrest Head. Orrest Head and the surrounding Elleray Wood was bequeathed by the Heyward family who once owned the Elleray Estate to the people of Windermere, forever. I found the start of this walk on the main road opposite the station. The view point is well sign-posted and I was soon at the top and overlooking a long stretch of Lake Windermere. 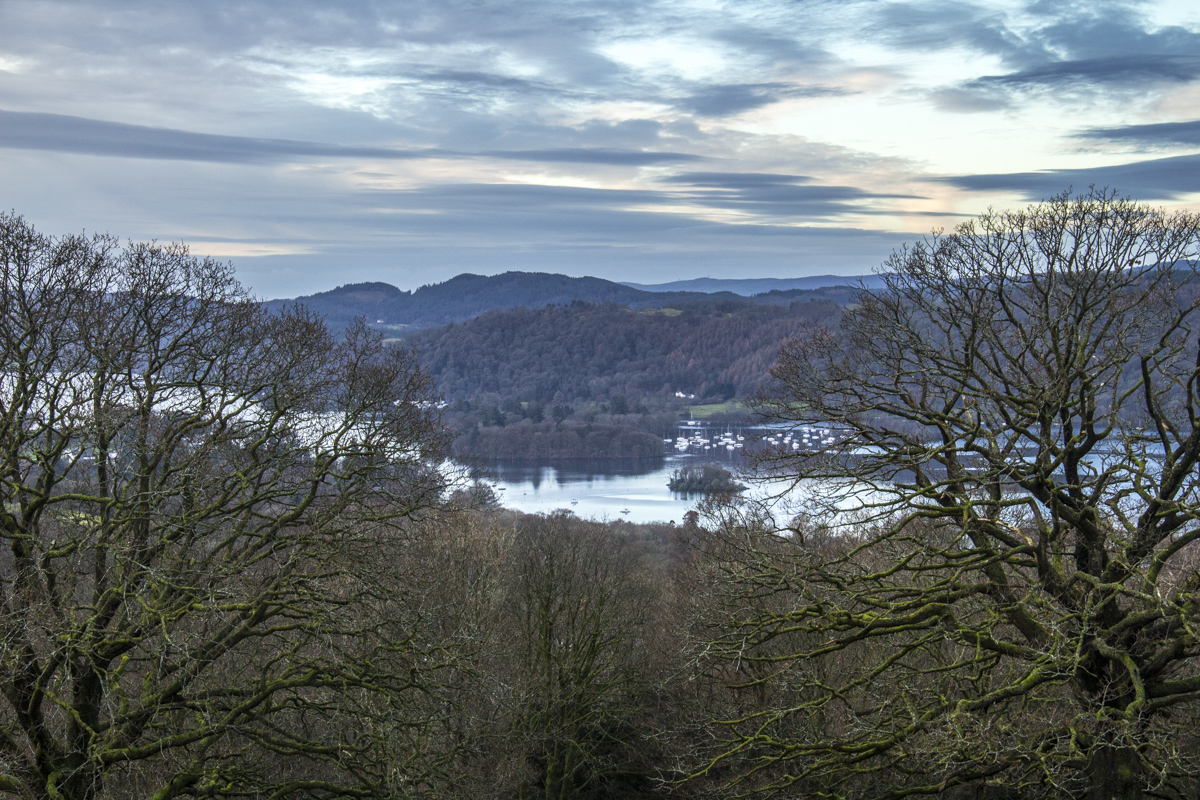 As I was not sure where the path down the other side would have led me I re-traced my steps to the bottom. But, inevitably I did not come out where I started but I did find a wooden sculpture of a Gruffalo – not that he was much help. However, I did meet up with a local farmer and his excitable border collie, Ben. We had a chat and then he gave me directions to Holehird. This involved climbing walls via stepped stiles and crossing some stunning scenery. It was a lovely walk and eventually brought me to my destination. 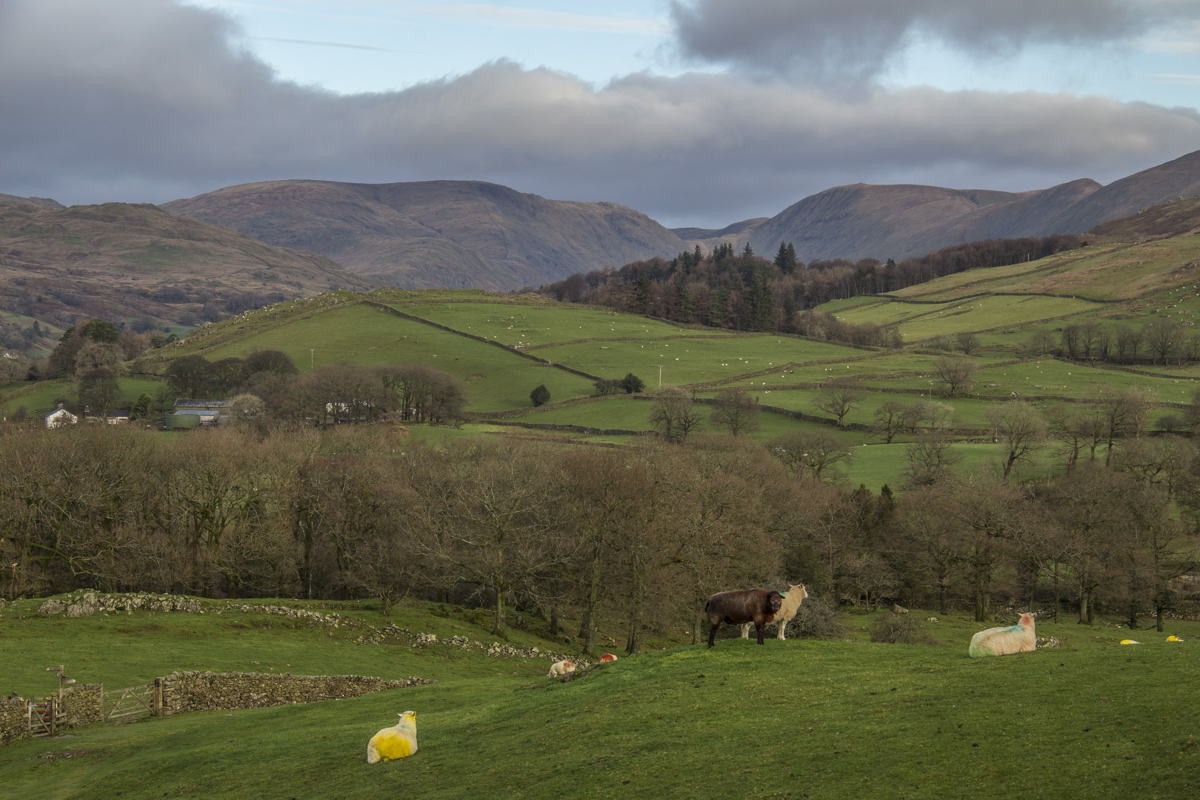 The Countryside above Windermere in the Lake District UK

Today Holehird Gardens are owned by the Lakeland Horticultural Society but during the nineteenth century they surrounded a stately home. This mansion is now leased to the Leonard Cheshire Foundation and is used as a home for the disabled. The whole estate has retained its grandeur and I felt I should have been arriving in a horse-drawn carriage as I marched up the long drive. I did take a detour to admire the tarn below me before turning my attention to the gardens. 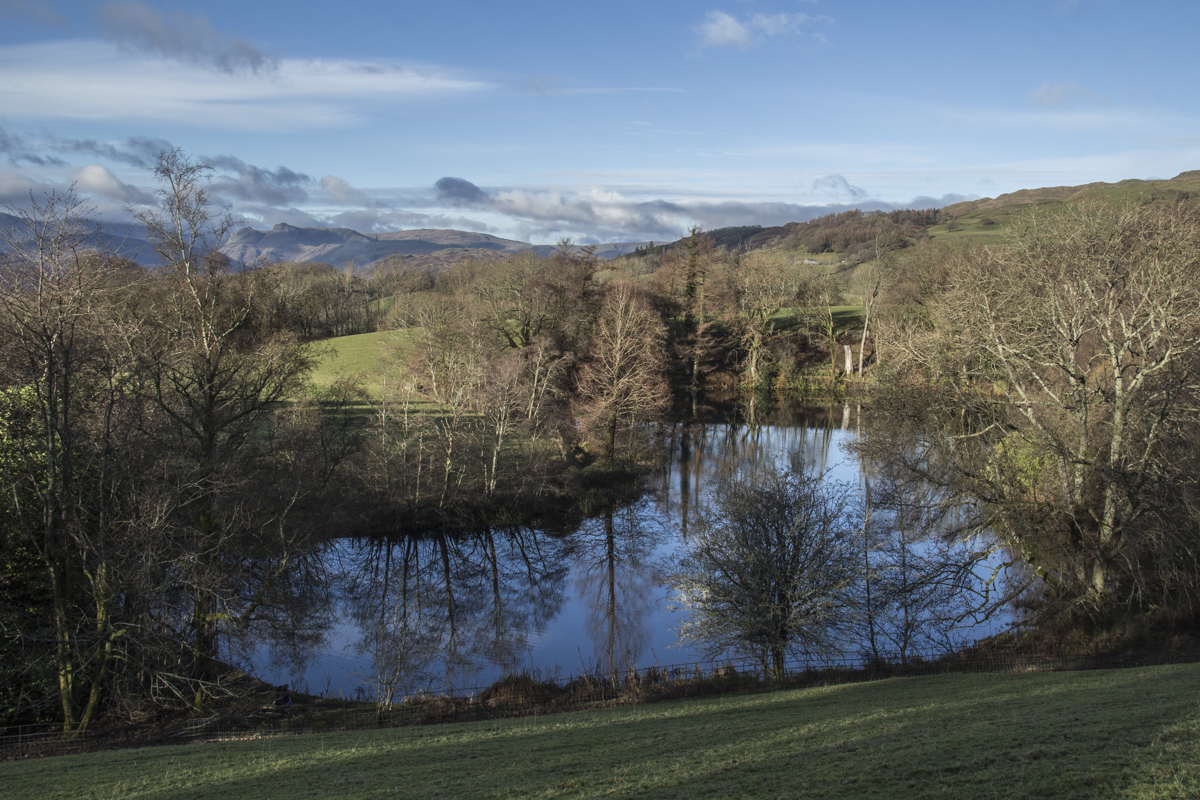 I started in the terraced garden of hydrangeas. Even though it was December there were still blooms on the leafless, brown bushes. It was the same in the rose garden, delicate blossoms nodded their heads definitely in the breeze. Everywhere I looked there were wonderful views of the surrounding countryside and treasures to appreciate in the different sections of the gardens. I particularly enjoyed the walled garden even though, being winter, the visitors centre was closed, there was still a lot to enjoy. Time passed very quickly and then I had to decide how to get back to Windermere. 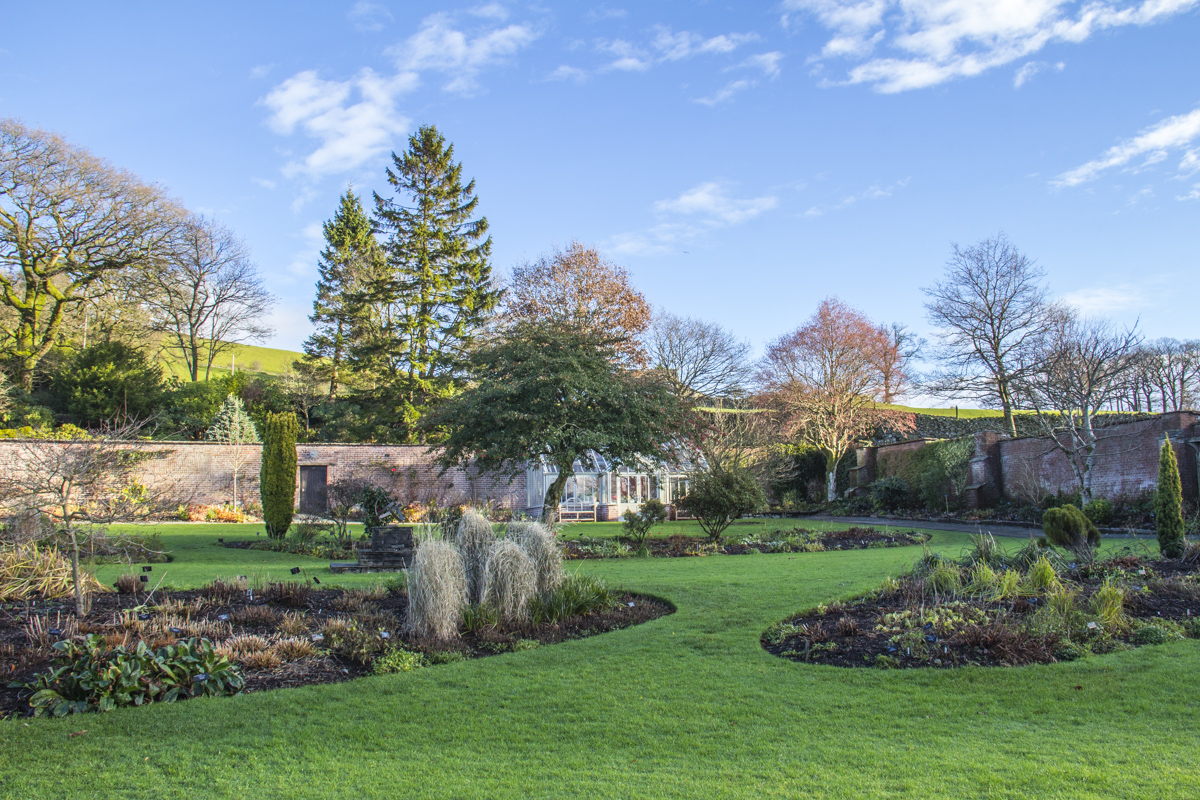 I decided to play it safe and follow the main road back into Windermere but soon after I joined that road I came across the entrance to St Catherine’s Estate. Its meadows, woodland and grazing parkland are owned and managed by the National Trust and a lovely place to enjoy some time outdoors. The area has benefited from bequests of land from wealthy landowners to the National Trust. This estate is also home to the National Trust building known as Footprint, and built using bales of straw. It is a centre where people can reconnect with nature through a programme of activities and workshops. I was pleased I had allowed myself to be distracted here as I also discovered a footpath that led me straight back to the centre of Windermere in just twenty minutes. I even had time to explore the town centre which has lots of independent shops including Musgraves, a traditional ironmongers, established at the end of the nineteenth century which seemed to have everything you could ever need for home and garden. 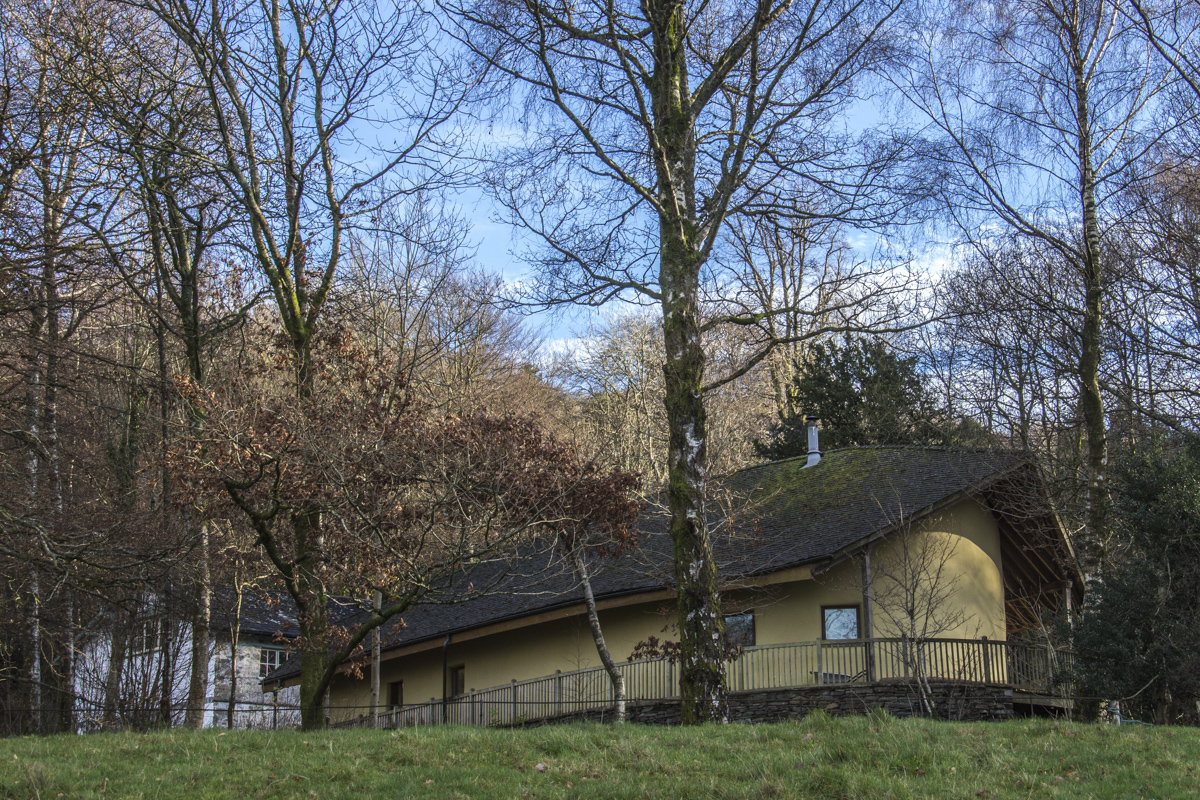 National Trust Footprint in Windermere in the Lake District UK

No trip to Windermere would be complete without a cruise on the lake. Windermere Lake Cruises organise boat trips of varying lengths throughout the year from Bowness Pier. I chose the 45- minute cruise and it was very enjoyable and interesting as we had a commentary regarding the buildings and islands we passed. Lilly of the Valley Island was named for the wild flowers that once grew there but during the eighteenth century tourists would row across to the island to pick the flowers and there are none there now. Storrs Temple appeared ethereally out of the mist. This garden house on the edge of the lake was built in the grounds of Storrs Hall (now a hotel) in 1804. After my cruise I set off to explore another historic building on the outskirts of Bowness, Blackwell Arts and Crafts House. 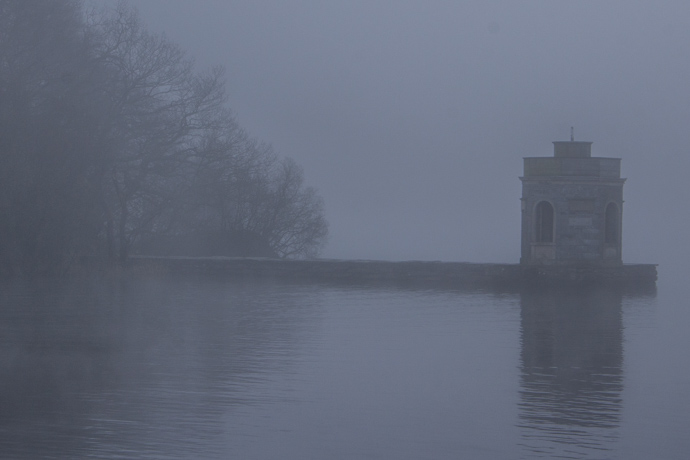 Storrs Temple on Lake Windermere in the Lake District UK

Blackwell, a beautiful Arts and Crafts House is a good walk from Bowness but while I was there I discovered there are plans to make it accessible by boat next year as it’s terraced gardens overlook Lake Windermere. It was built as a holiday home in 1901 for the Manchester brewer Sir Edward Holt and it is a masterpiece of artistic design. The house has been used as a school and office space since it was built but was purchased by Lakeland Arts in 1999 and restored to its former glory. And it is glorious. It is probably one of the most important Arts and Crafts Houses in Britain. These houses were built from the inside out concentrating on the interior design and showing off the workmanship that has gone into it. It is a delight wandering around the different rooms and learning about the leading lights during this period including the well-known William Morris and Architect Mackay Hugh Baillie Scott who designed Blackwell. I was impressed by the fireplaces which adorned every room and in particular those set in ingle nooks. I also enjoyed my cream tea in their café before setting off to walk back to Bowness and the World of Beatrix Potter. 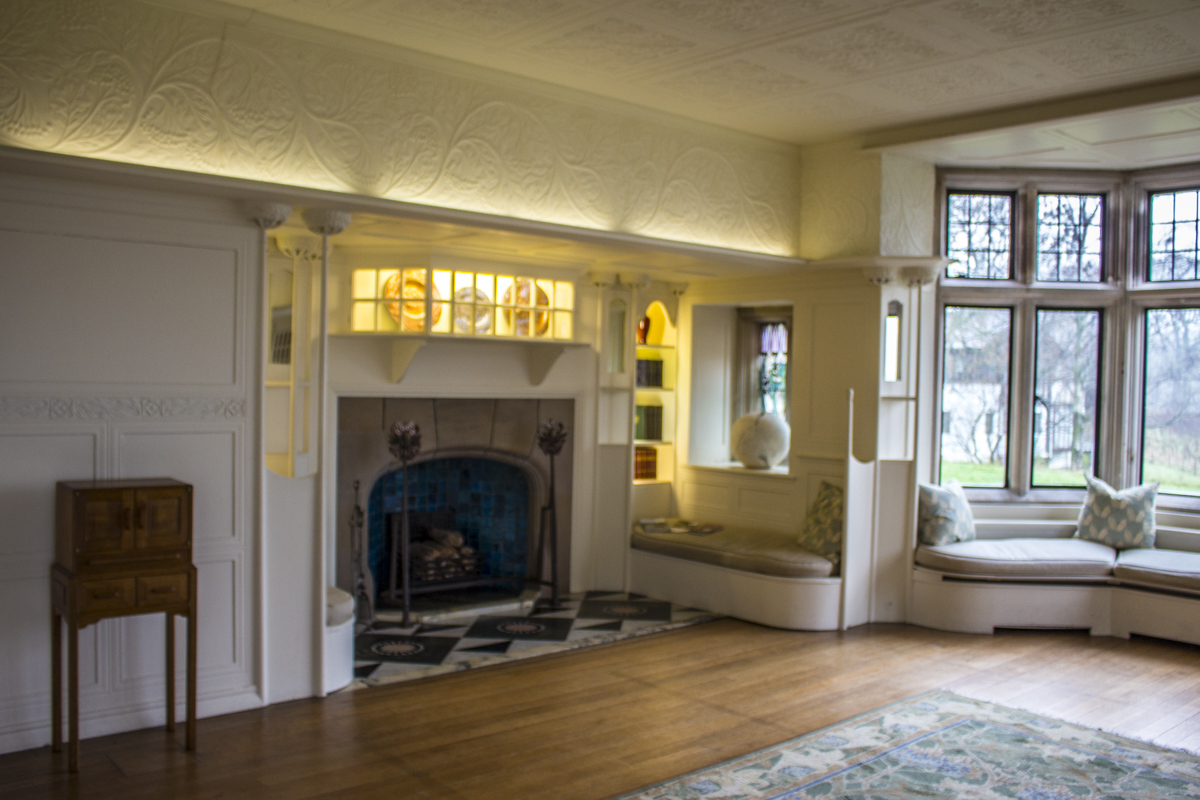 The White Room at Blackwell in Bowness, Lake District UK

The World of Beatrix Potter

The World of Beatrix Potter is a charming exposition about the life of Beatrix Potter who loved all animals and brought them to life in a series of books that delight children and adults alike. My visit started with a short video about the author herself which was very interesting. I loved wandering through a series of delightful sets that feature the animals in her stories. Mr McGregor’s garden has been re-constructed on the terrace outside the building. I also learnt more about the life of Beatrix. I had not been aware that a lot of the land she had owned in Cumbria was bequeathed to the National Trust so that others could enjoy the countryside as much as she had. The World of Beatrix Potter was established in a former Edwardian laundry where hotels once sent their sheets to be washed. On the other side of the road is The Old Laundry Theatre also once a laundry and is now a thriving little theatre. 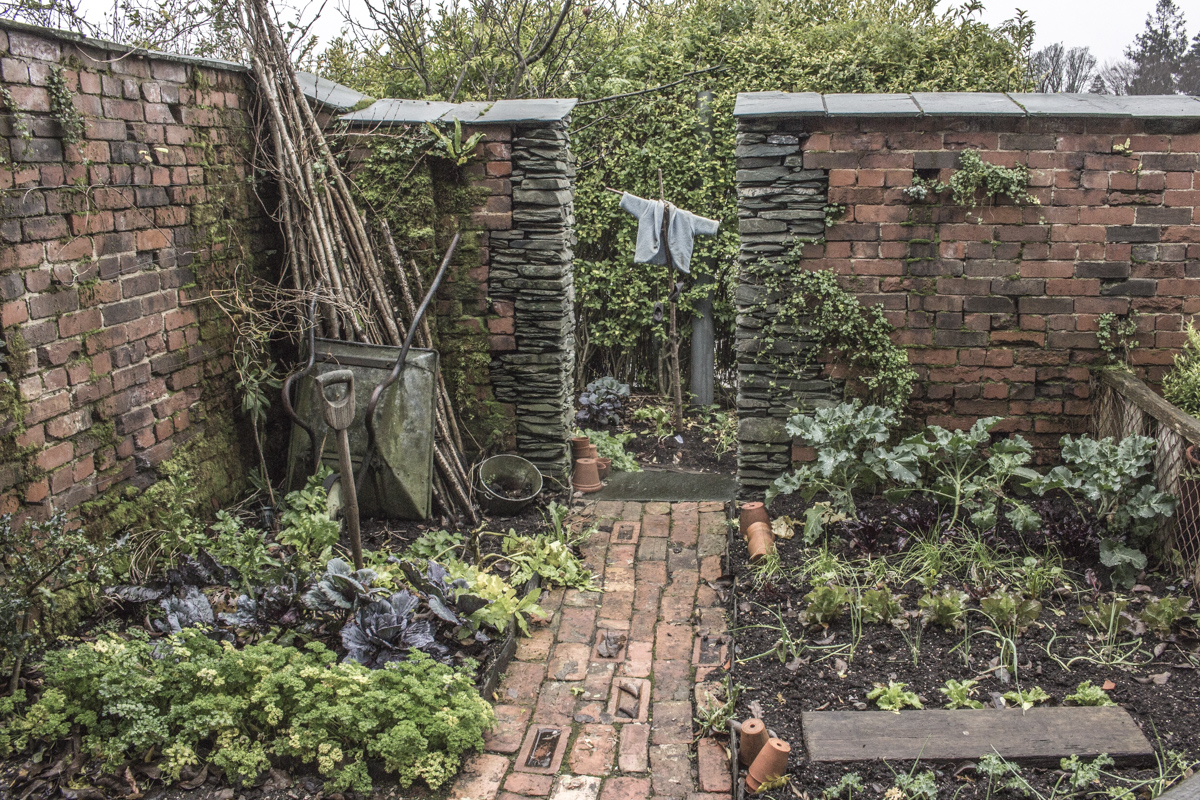 Wandering around Bowness I found some more interesting buildings. The East Window of its fifteenth century church, St Martin’s, has been described as the finest collection of medieval glass in North-West England. This church also has a unique Arts and Crafts interior dating from its restoration in 1870. On Bowness Pier I discovered a row of cute wooden huts. These were originally Cushion Huts owned by individual boatmen to store their cushions to be used in their rowing boats. They were restored in 1990 and are now occupied by a variety of small businesses. While waiting for the bus back to Windermere (enough walking for one day) I was amused by the antics of swans, geese and ducks on the shore on the lake. What a great day out it had been. 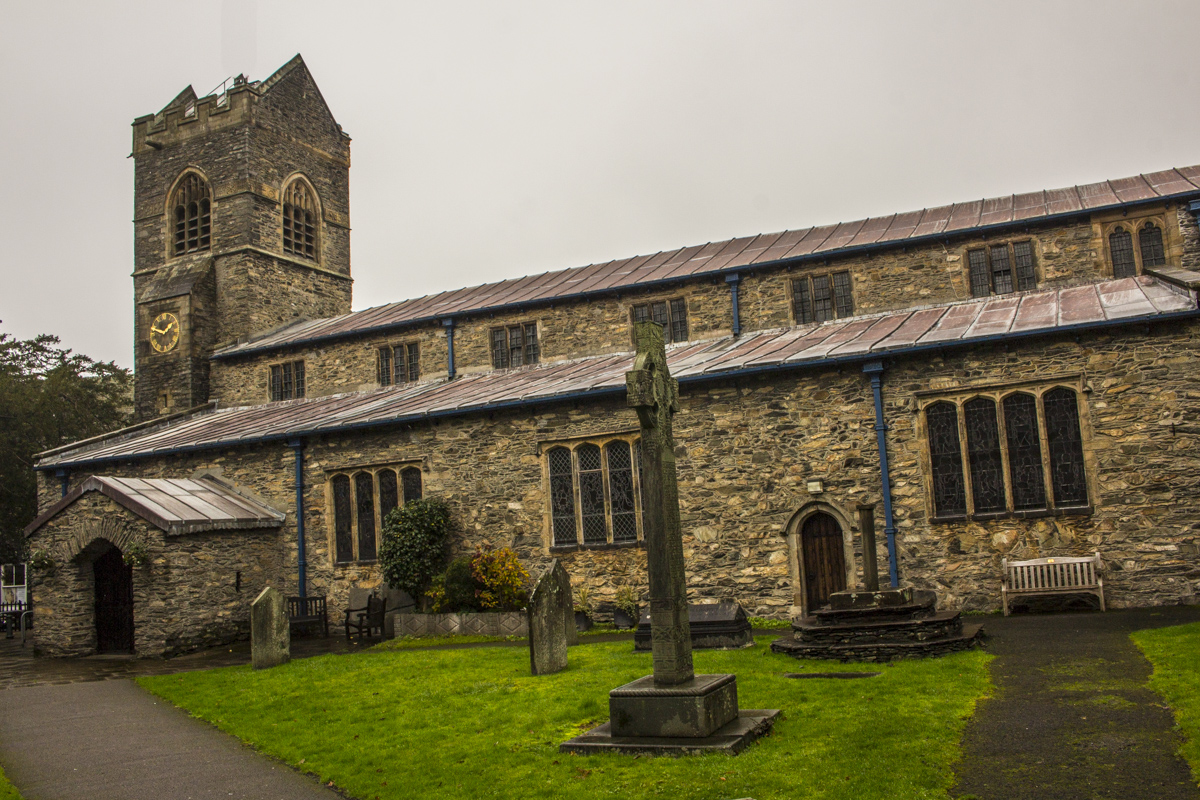 Church of St Martin in Bowness in the Lake District UK

Virgin trains run a service from London Euston to Oxenholme. There is a local connection from Oxenholme to Windermere. Local buses run between Windermere and Bowness and day tickets are available.

I stayed at the award-winning Cedar Manor Hotel. This hotel has good reason to be proud of its excellent hospitality and great service. Nothing is too much trouble in this luxurious boutique hotel that offers beautiful, well-appointment rooms and fine dining in its restaurant. It is conveniently located a short walk from Windermere station and Windermere town centre. Next to the hotel entrance is a footpath that goes down to Lake Windermere. Stops for local buses are also close by. So you can park your car and walk or take the bus throughout your stay. Windermere is surrounded by a network of paths. Bowness Pier is also within walking distance for cruises, ferries and boat hire on Lake Windermere. 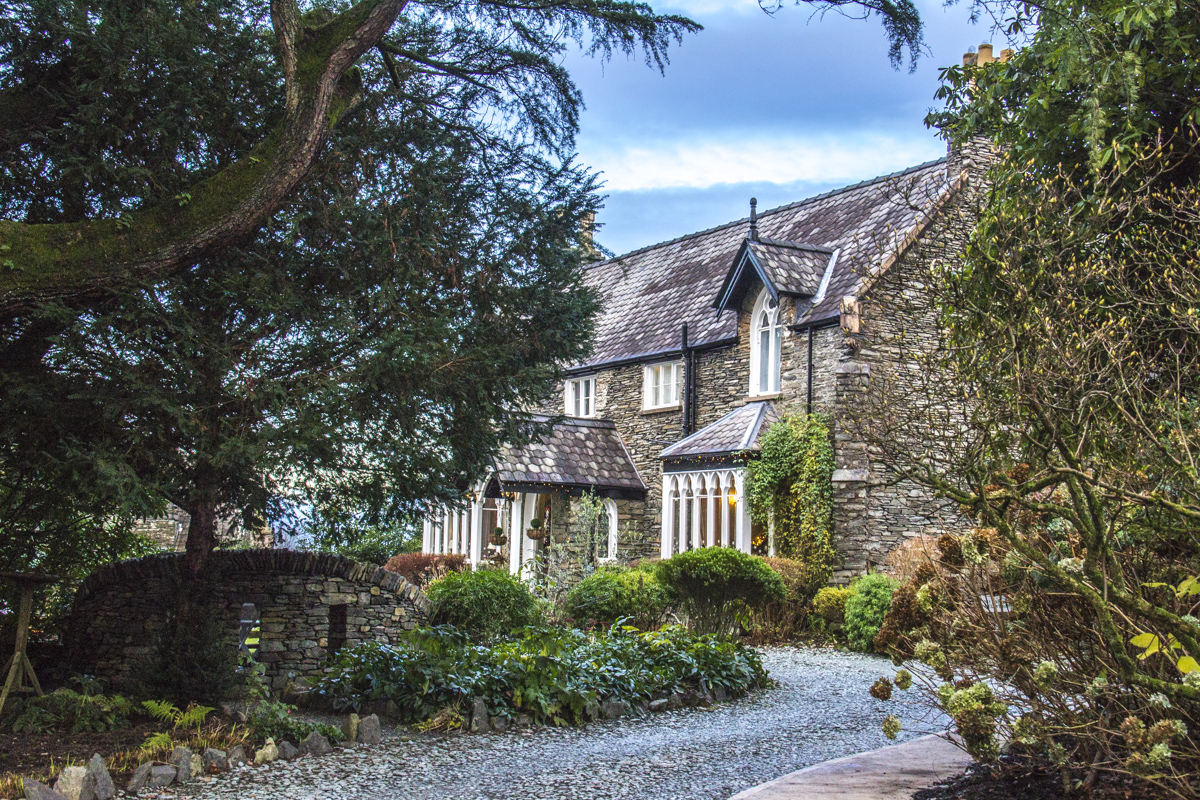