Dunes, Amber, Boats and Forests on the Shores of Lithuania

Lithuania has one short coastline but three shores, all very different in character. Two of them fringe the Curonian Lagoon which was created by the formation of the narrow Curonian Spit. The third is on the Baltic Sea. Each one offers a different adventure for its visitors.

The Curonian Spit (Kuršių Nerija) is a long narrow sand spit stretching for fifty kilometres on the Lithuanian side and sheltering part of its coast from the ravages of the Baltic Sea. This spit has been recognised as a World Heritage Site by UNESCO due to its unique landscape featuring small, lakeside settlements such as Nida and Juodkrantė 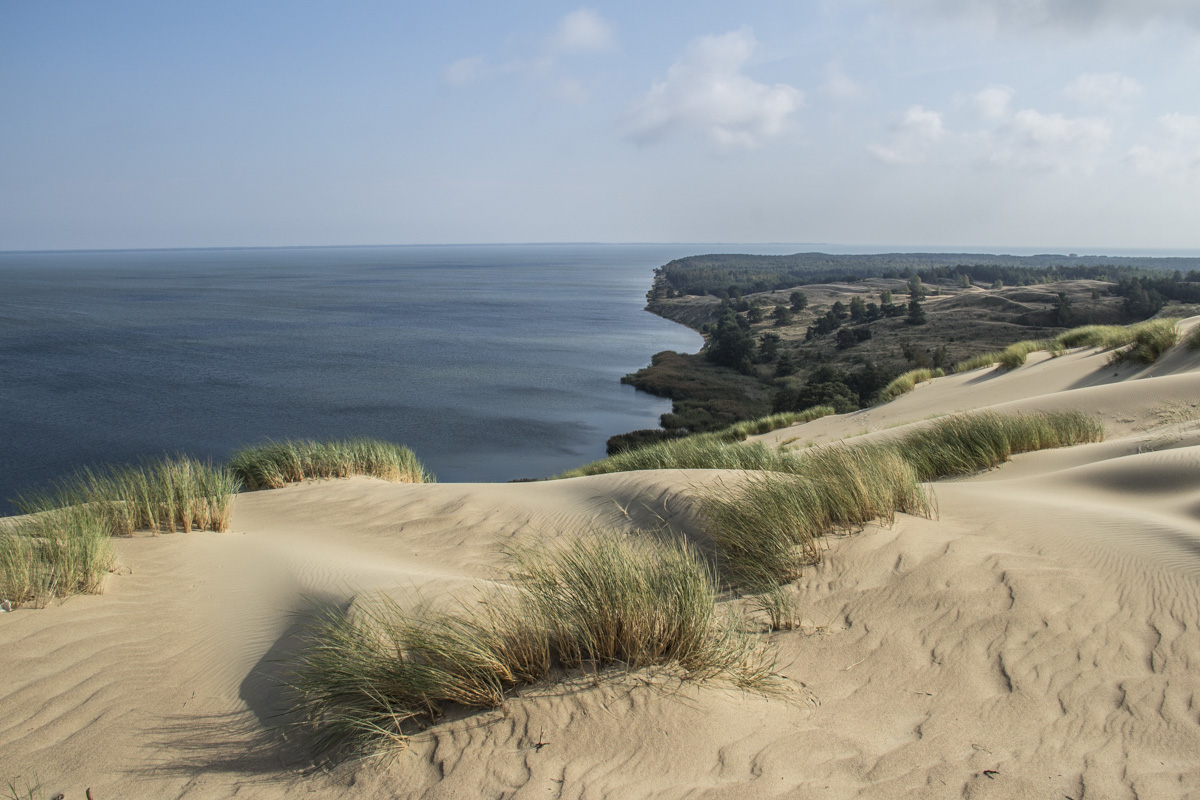 In 1991 the Curonian Spit National Park was established to protect the unique ecosystems of the spit and the lagoon. While exploring the Curonian Spit National Park I joined a sand tour in Nagliai Strict Nature Reserve led by Kornelija a ranger of the park. Although they are referred to as dead dunes in this restricted area the dunes are still live and migrate due to the interaction of wind and sea. These dunes are also referred to as White Dunes – white sand habitats that are constantly drifting due to winds in the lowlands of the great sand dune crest down the middle of the spit – and Grey Dunes which are almost completely overgrown by lichen and moss, where species-rich plant communities form. Kornelija pointed out both of these on our walk and explained how, over the centuries the movement of the dunes has been controlled by the planting of huge forests to stabilise the dunes. The small fishing village of Nagliai was not so lucky and is buried beneath the dunes we were walking on. Walkers on the dunes are restricted to the board walks which are regularly moved to protect the landscape. After a steady, uphill climb I reached the end of the board walk and was able to kick off my shoes and walk to the summit in bare feet. It was a lovely experience – sand in my toes and wind in my hair. At the top the cliff edge was fences off but I climbed the wooden look-out and was able to appreciate the beauty of the coastline that stretched for miles on either side of me. 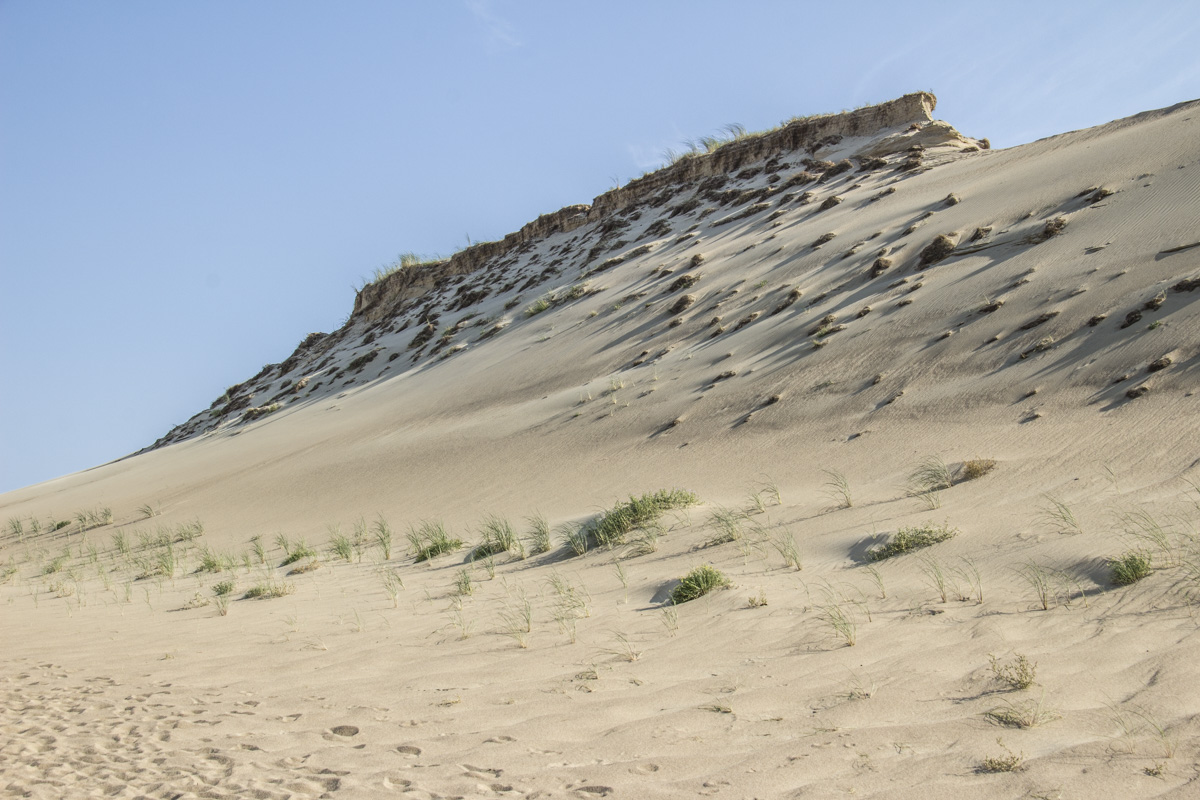 Dreverna, a Modern Marina and a Wooden Viking Boat

Across the lagoon, on its mainland side is the small port and marina of Dreverna accessible by a regular ferry service from Juodkrantė in the summer. The marina, at the head of a deep entrance channel on the River Dreverna, was built in 2009 and modernized in 2017. It is a complete contrast to the natural, uninhabited reserve I had just visited. A haven for lovers of water sports it features a hotel, a campsite and some modern wooden cottages that can sleep eight people. 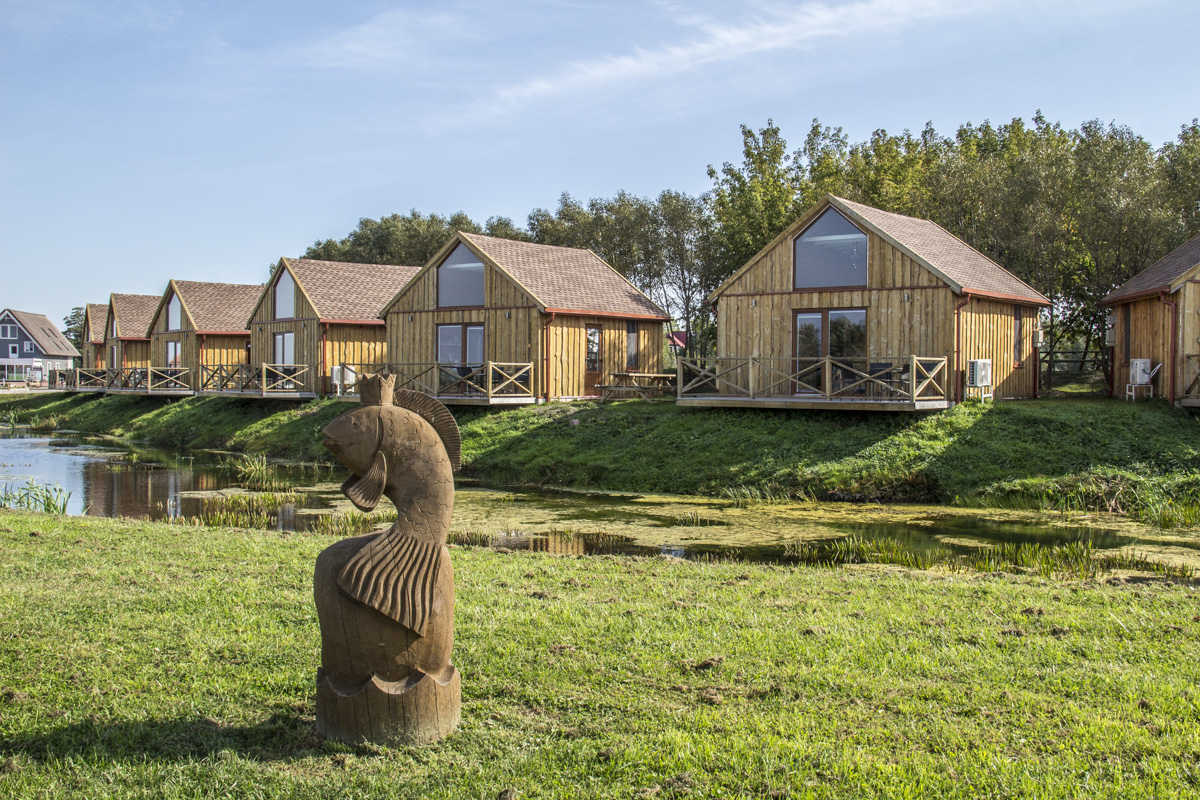 Holiday Cottages at Dreverna on the Curonian Lagoon Lithuania

The calm waters are ideal for every water sport imaginable and a wide variety of water-based vehicles are available to hire. A kite surfing centre near the marina caters for all levels from professional to beginner as the conditions, wind and shallow water, are ideal for this sport. I opted for a cruise on the Dreverna, a traditional wooden Viking trading boat. This Viking boat was built from oak in 2014 and is available for group cruises. Once the sail had been hoisted it was very peaceful floating across the water with just the occasional creak from the huge wooden rudder at the back. I was offered some traditional Minor Lithuanian coffee or kafija made from chicory which was really good. However, I was not so keen on the traditional sponge cake made with curd. 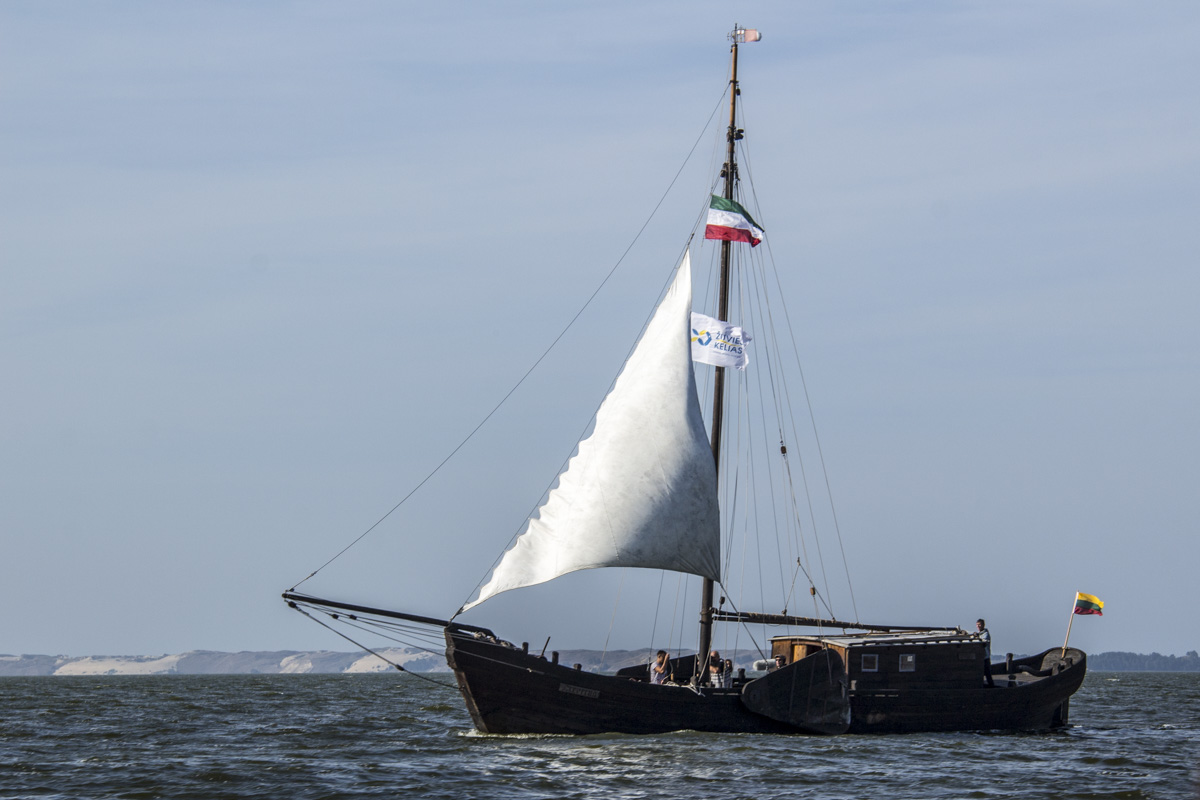 Back on dry land I climbed to the top of the fifteen metre steel tower to view the Curonian Lagoon in front of me. I was delighted to find I could also see the dunes I had recently climbed on the far side of the water. 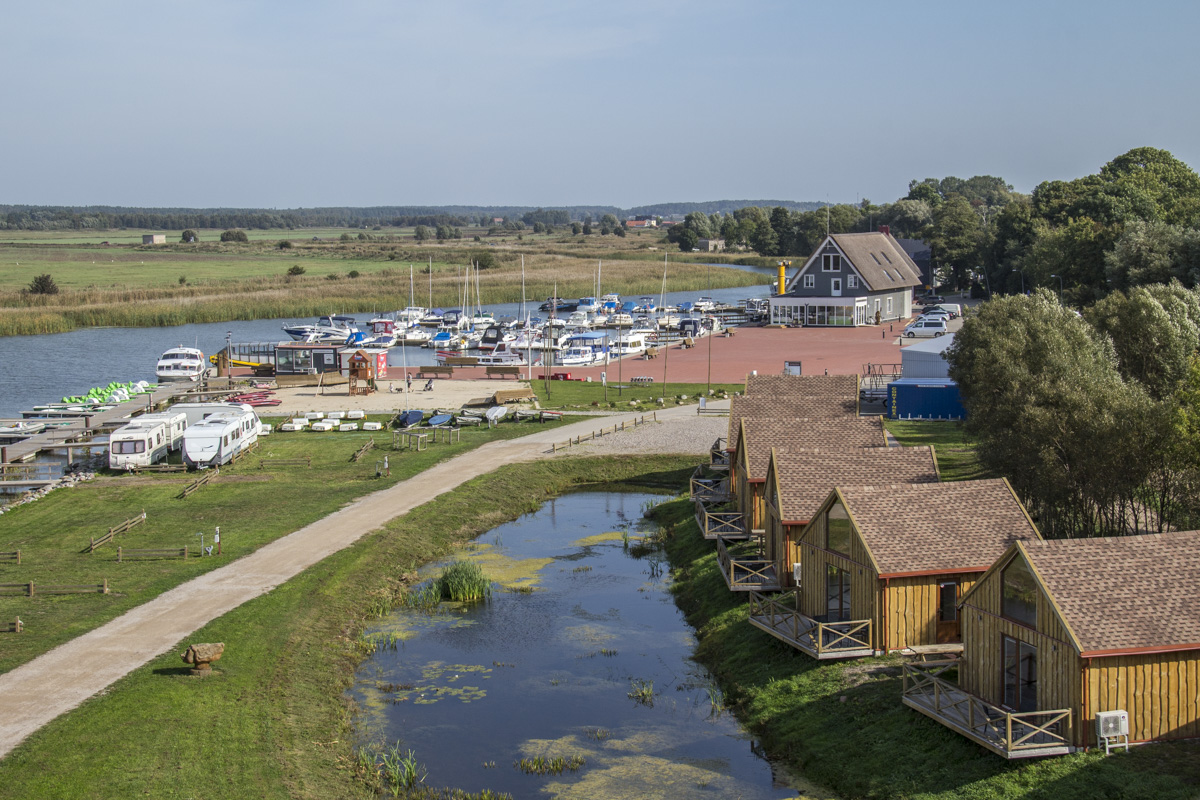 Dreverna on the Curonian Lagoon Lithuania

Dreverna was originally a fishing village dating back to the thirteenth century. Its history is celebrated in the J Gižas Ethnographic Homestead close to the harbour. Jonas Gižas was renowned as a maker of the Kurėnas, twist- and fish-trap boat one of which is on display near the homestead. It was an interesting visit learning about the history of fishing in the village and also of the Gižas family. 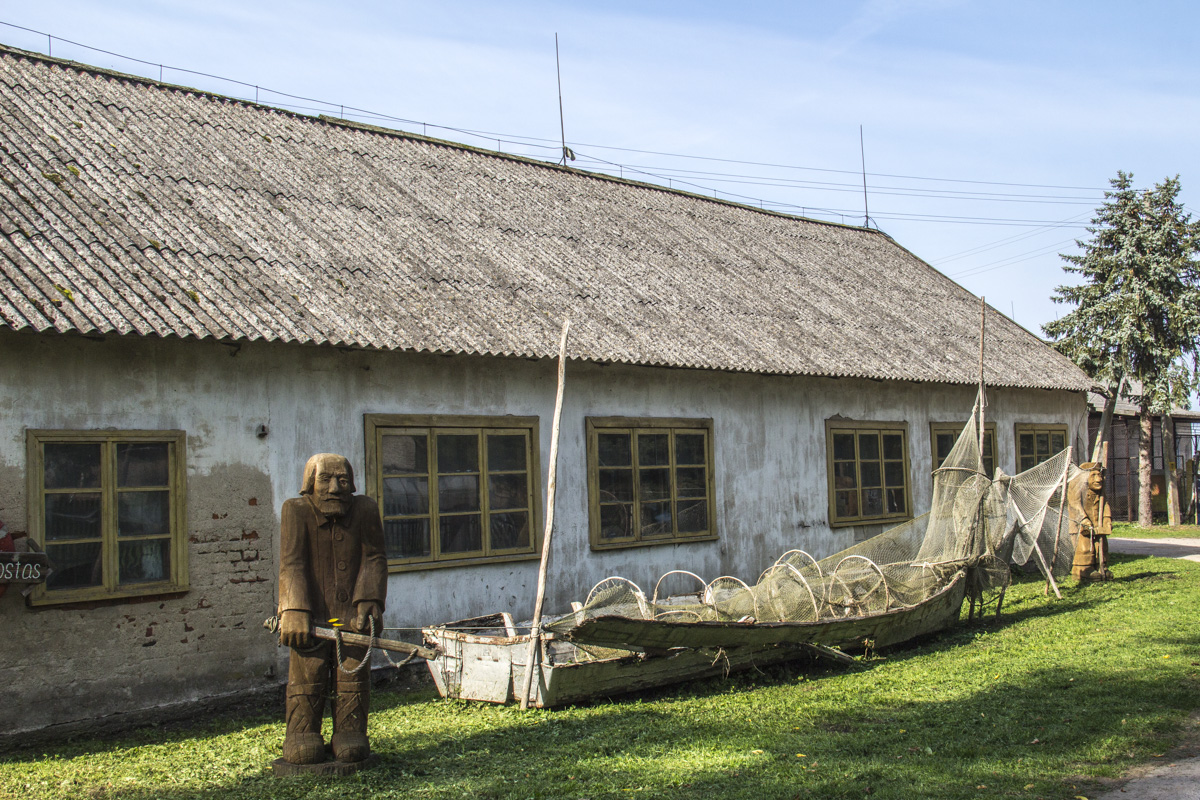 An Ancient Forest in the Pajūrio Regional Park

The Pajūrio Regional Park also known as the Seaside Regional Park stretches from Klaipėda to Old Palanga. It was established in 1992 to protect the coastal landscape of dunes, cliffs, boulders and the village of Karklė, an historic coastal settlement.  My visit to this park began at the administration offices and Visitor Centre in Karklė. The Visitor Centre opened in 2012 and has a small exhibition about the park. It was here I met my guide, Erlandas, who works in the park. He is very passionate about his work here and told us that the park attracts bird watchers as it is on several migration routes, cyclists as it is on long distance cycle routes and local visitors seeking some tranquil time. On our first foray into the forest we followed a path along the cliff top, enjoying the views out to sea and marvelling at the way the trees were clinging to the eroding cliff face. 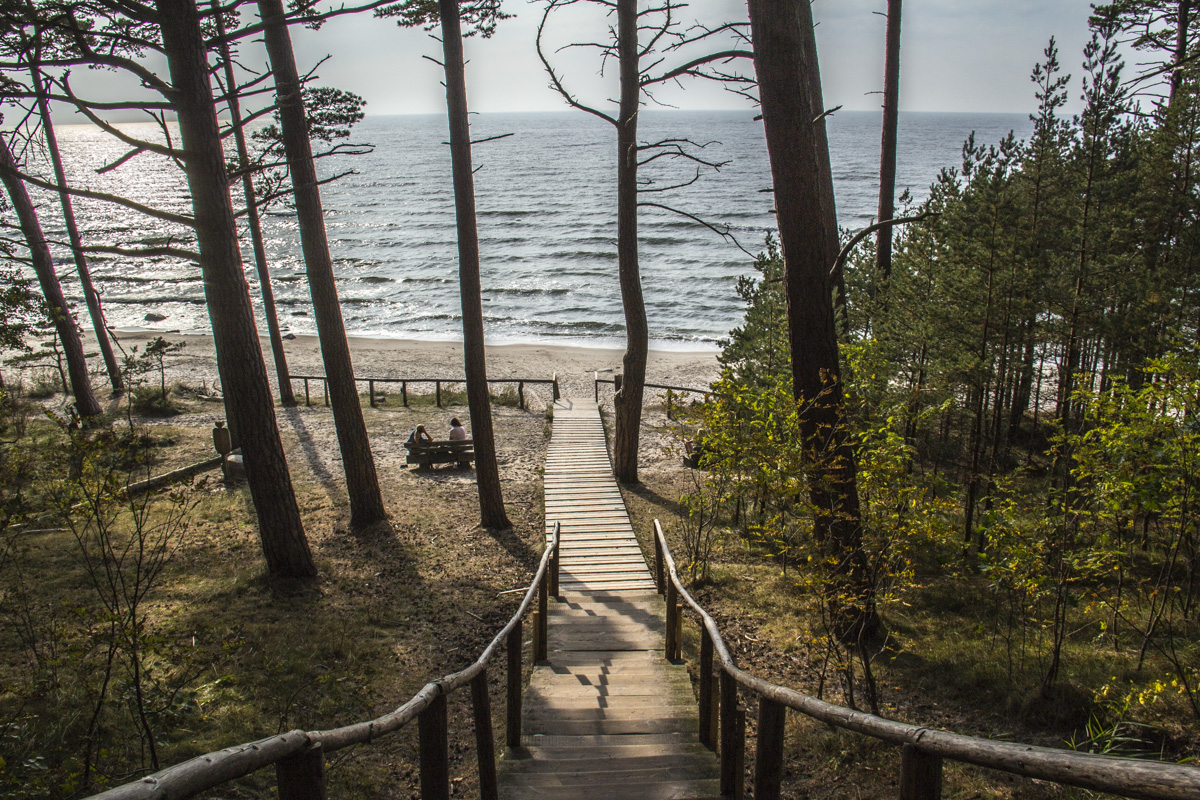 Our walk took us as far as the Dutchman’s Cap a crescent-shaped dune or escarpment whose cliff edge is being eroded by the sea. Best viewed from the sea itself this escarpment, of course, has a legend about its unusual name. Is it named for the cap of a particular Dutchman or does it relate to the shipwreck of a Dutch vessel? I don’t suppose we will ever know. 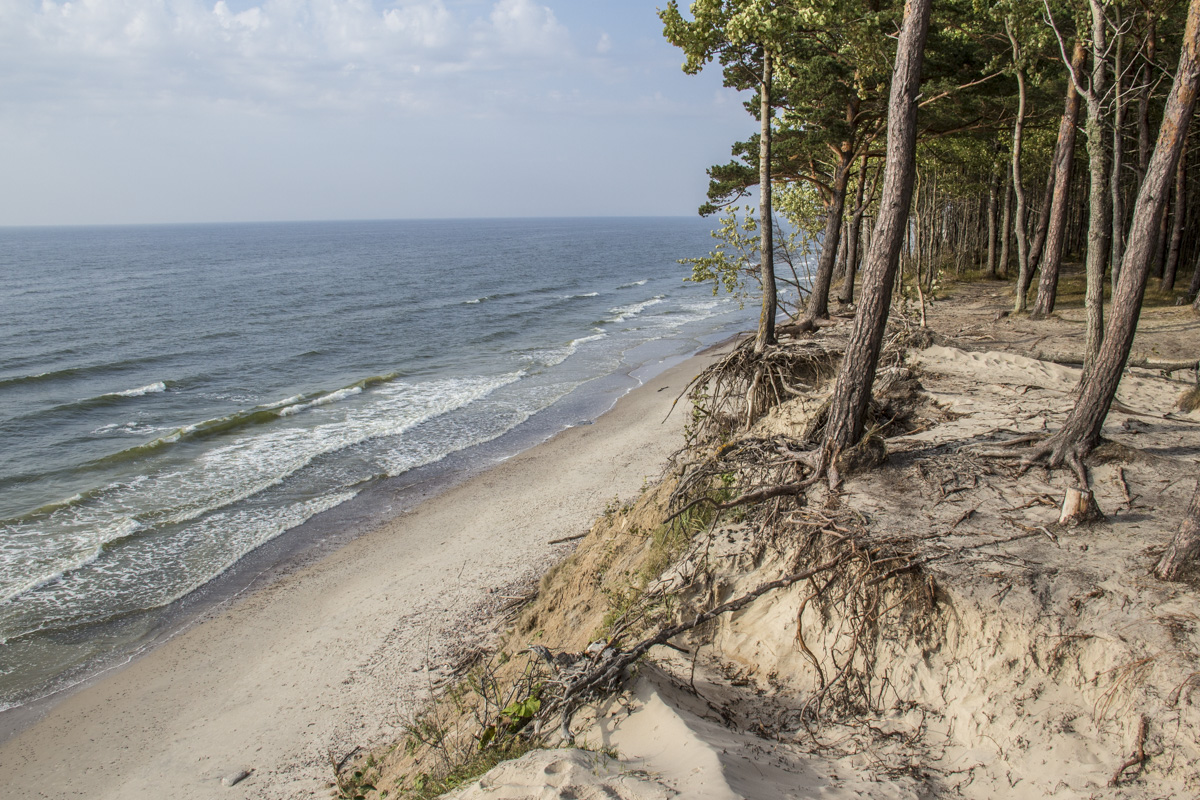 My second walk took me to the site of an ancient hillfort deep in the trees. Hillforts, the oldest defence fortifications in Lithuania, are considered to be the most beautiful archaeological monuments in Lithuania. To be honest, I found it hard to envisage a hillfort on this site of humps and hollows but, swept along with the enthusiasm of Erlandas I did my best. The different areas of this hillfort are linked by wooden bridges and it was fun exploring the area and learning about the hillfort that was known locally as the Amber Fort due to large deposits of amber found here. 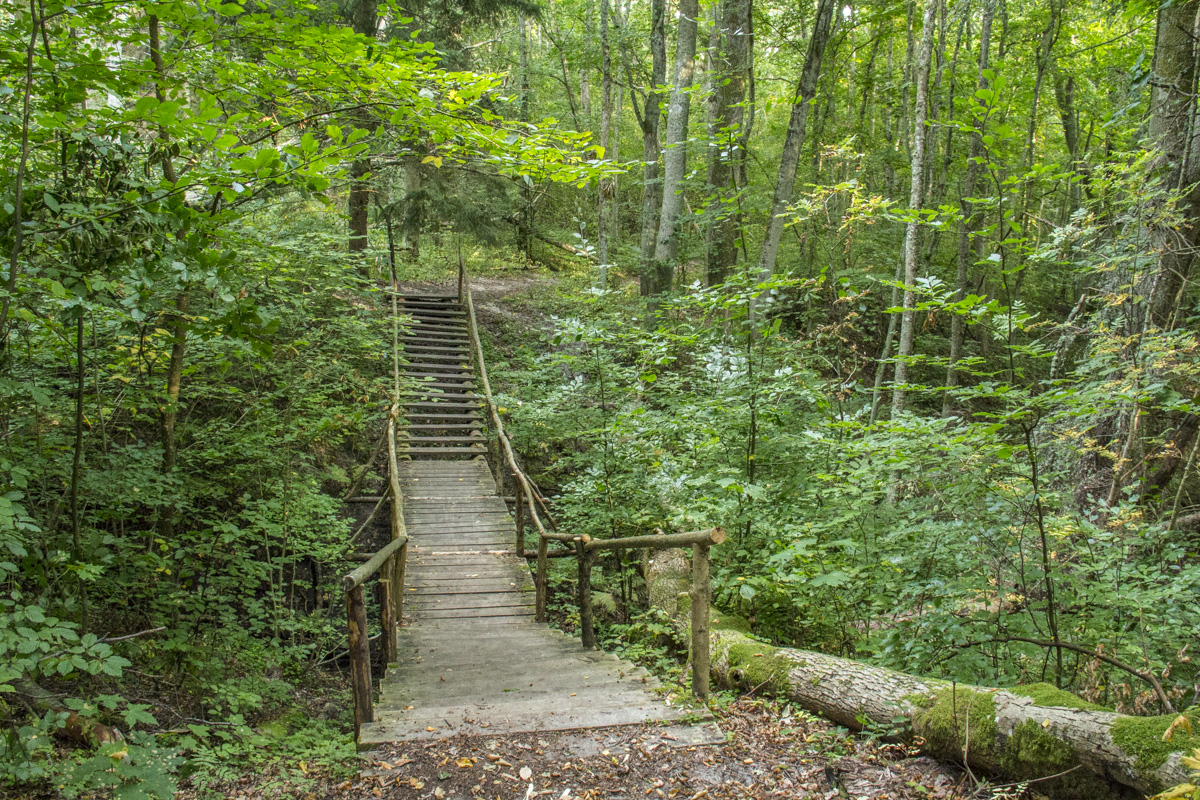 A Meeting with an Amber Hunter

Back at the Visitor Centre, as the day was drawing to its close I met the well-known amber hunter and guide Igor Osnač. His presentation and tour, the Secrets of Catching Amber, was enthralling. First I settled on the bean bags in the Visitor Centre to watch a short video about the original amber hunters. Then I was invited to separate pieces of amber from a collection of stones and pebbles. Most of them were amber as this fossilized tree resin comes in a wide variety of shapes, colours and sizes. Appreciated for its colour and natural beauty this gemstone has been valued and used in the making of jewellery for centuries. It has also been used as a natural healing agent. No wonder amber or gintaras is known as Lithuanian gold as it is still harvested from the sea here. Generally, amber rests on the sea bed but it will come to the surface two or three days after being disturbed by the turbulence of a storm. After learning about this precious stone I set off with Igor to see if we could find some. He marched along the shore of the Baltic Sea looking for waves dark with sea weed while I trotted along beside him waiting to examine his ‘catch’ for pieces of amber. He did find some although I am not convinced they came from the sea. However, it was a great experience and one I would highly recommend. 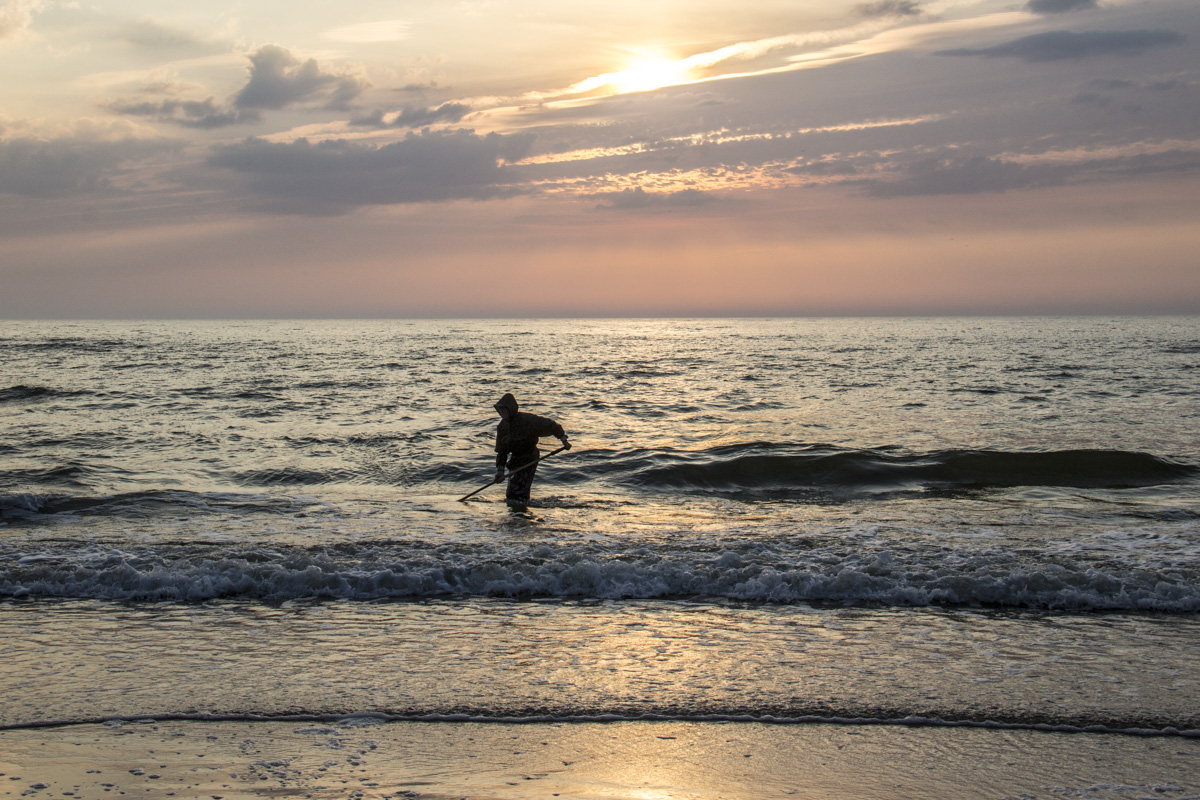 Amber Hunter on the Baltic Coast of Lithuania