Traveleyes International is a British-based holiday company takes blind and visually impaired people (VIs) along with sighted travellers to numerous destinations around the globe. Sighted travellers are asked to share their sight with their blind colleagues, leading them and describing what they see and helping them to enjoy their destination experience to the full. The blind and VI travellers are required to be independent and capable of looking after themselves – the sighted travellers do not act as carers, just as their guides. Sighted travellers get a discount on the trip, up to half the price charged to VIs. Anyone can do it, you just need to like meeting people and helping out where needed.
This personal account by Simon Hedger, a sighted traveller, paints a lovely picture in words of his experience exploring Romania and Transylvania. 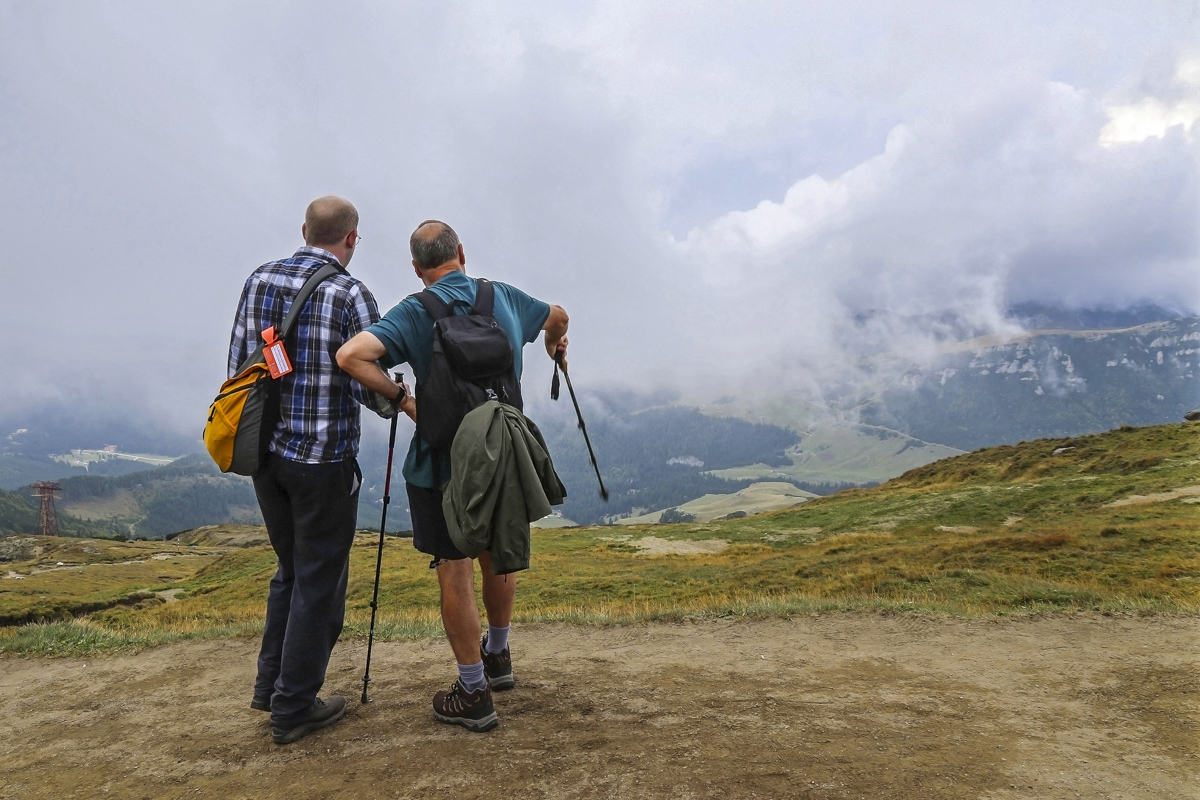 It was getting dark as our small group arrived by bus in the Saxon village of Viscri, set in the heart of rolling countryside in Transylvania. It had been a long and tiring day and the last five miles had been uncomfortable as we were driven along a bumpy unmade road, through verdant terrain. We all just wanted to get to our guest house and chill out before meeting for dinner.

But our little bus had come to grinding halt – it had to, because it was surrounded by large herd of cows making their slow way back to the cowsheds in the small farmsteads that lined Viscri’s main thoroughfare after a day grazing in the pastureland surrounding the village. Not for the first time during our journey around Romania – and nor would it be for the last – we had been transported back to daily rituals and life straight out of a previous century. 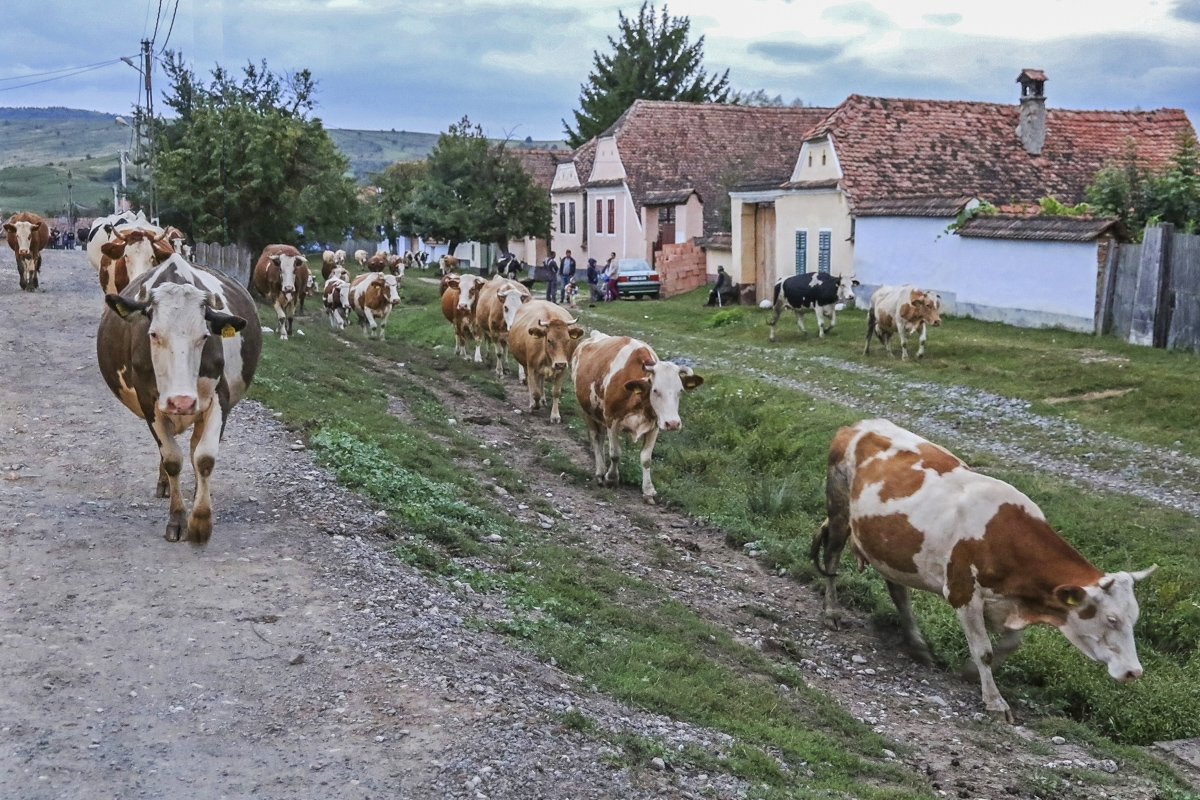 Viscri to Bran in Romania

Our second day we were heading to Bran, renowned the world over because of its castle with links to Count Dracula. On our way there we had had our first hike along well-worn paths high in the Carpathian mountains in the Bucegi massif near the town of Sinaia. Romanian walkers and day trippers come here in droves to make their way up to curious rock formations carved out over centuries by the elements, such as the Babele (Old Women) and Sfinxul (Sphinx). It was a long trek but allowed time for the VIs and sighted travellers to get to know each other. 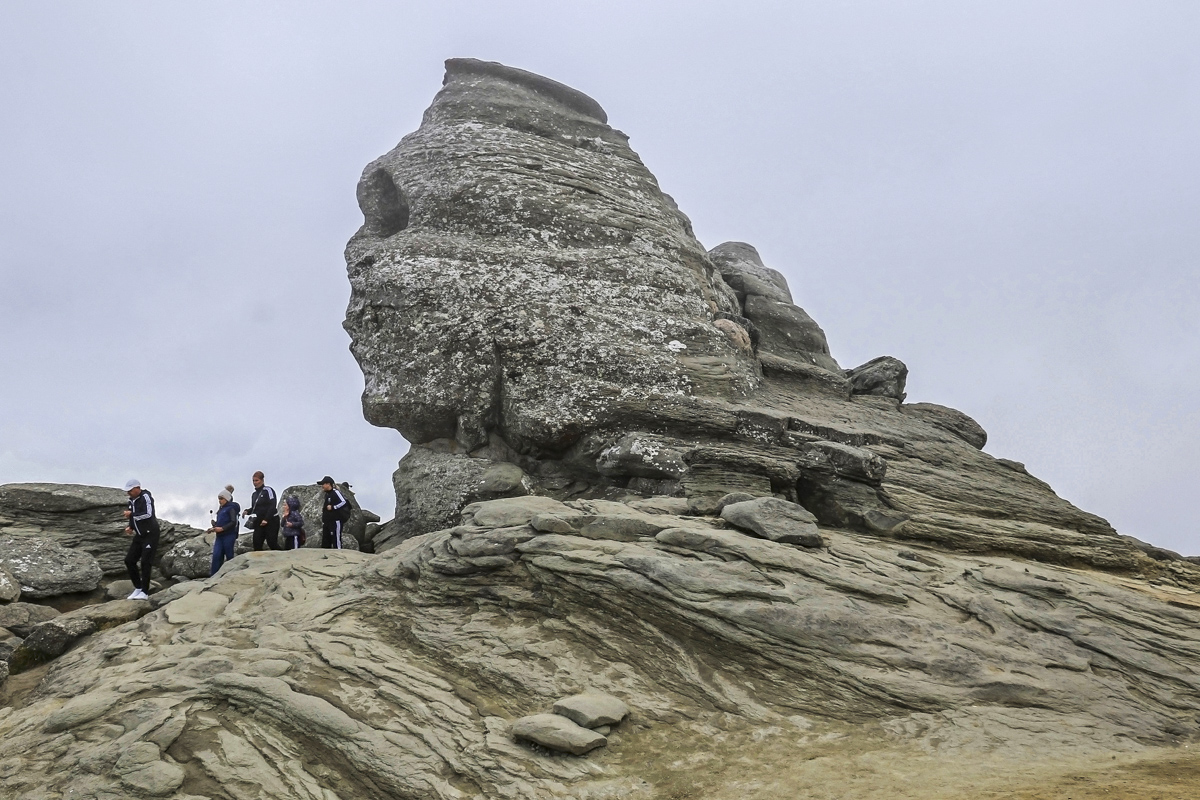 After our walk and before we reached Bran we had a brief stop at Peles Castle at Sinaia, built as a summer palace for Romania’s King Carol in the latter half of the 19th century and finally completed in 1914. Peles Castle is a riotous mix of Renaissance and Gothic styles, richly furnished and by palace standards it could be called almost homely. It was the first palace in the world to be centrally heated and have electricity throughout. It is a slightly fantastical place, almost a last hurrah to a European age that was about to be torn asunder by the First World War. 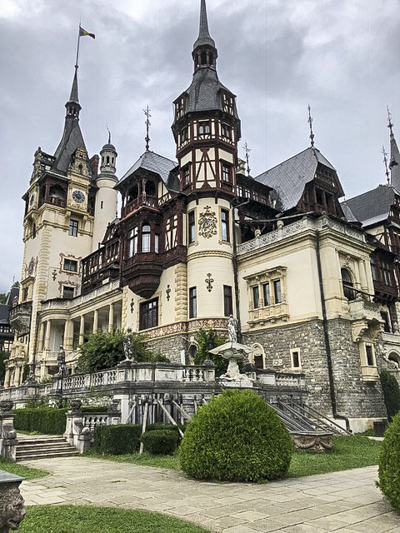 Bran with its comfortable hotels and guesthouses by contrast is small and unremarkable tourist town, with the exception of its castle and stunningly beautiful mountainous scenery. Bran castle is a real hotch-potch of turrets and towers and architectural styles sitting precariously on a rocky crag that looms above the town and the forest that surrounds it. At night the castle is floodlit and from the town below you can almost feel the sinister presence of Dracula and his bats. It dates back to the twelfth century when it was a border fortification between the regions of Muntenia and Transylvania. The castle is quite hard to navigate when it is heaving with tourists, with some tight passageways and steep and narrow staircases, but the VIs in our group took it in their stride. Without sight, they make the most of other sensory sensations, where possible touching the artefacts and stonework to get an understanding and appreciation of where they are. 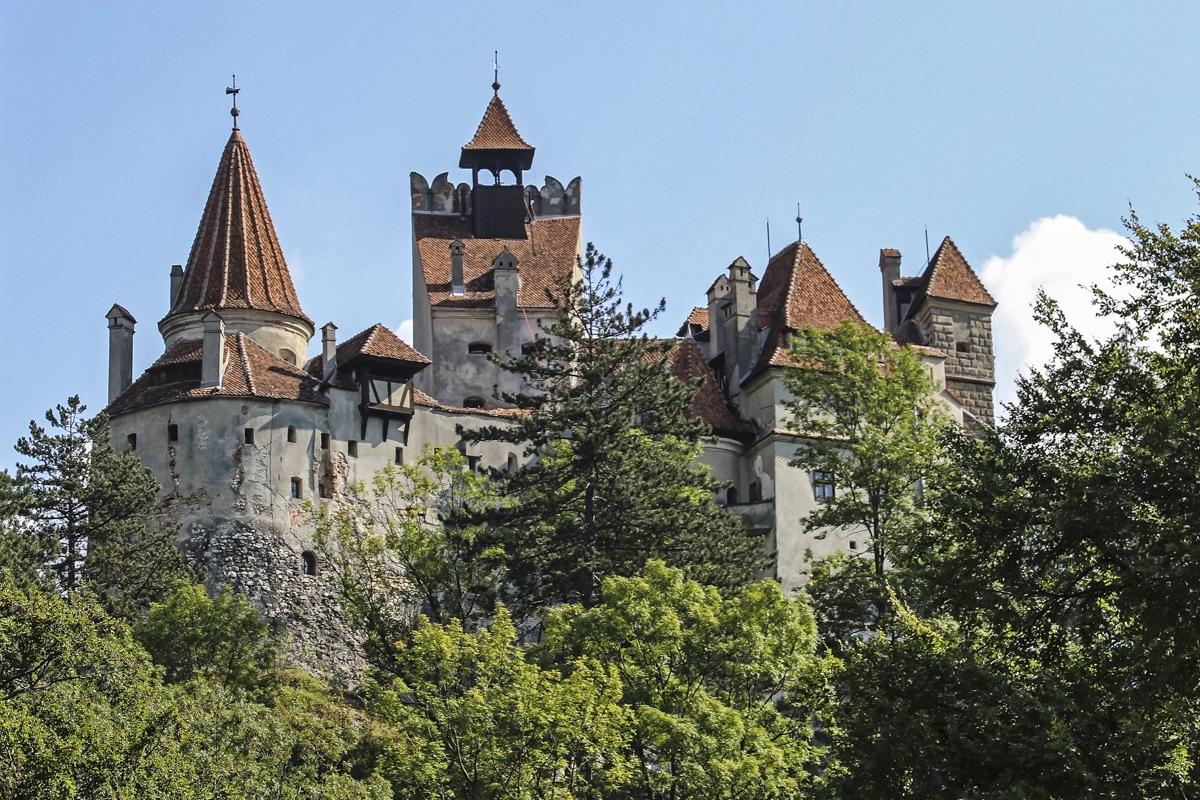 We also visited the Libearty Bear Sanctuary near the town of Zarnesti. The forests of Romania and Transylvania were once happy havens for bears but humans have treated them badly. Captured as cubs, they too often spent their life in tiny cages. Only being allowed out to be used as tourist attractions. These bears have terrible physical and mental scarring. But there are beacons of hope. In its 69 hectares of sealed off forest the Libearty Sanctuary has brought nearly one hundred rescued bears from all over Romania to live their lives out in dignity, freedom and devoted care. Restricted visiting is allowed as the bears come first. Some of the individual stories are heart breaking but one particular bear touched us all especially. Max was deliberately blinded as a cub and drugged every day. He was rescued by the sanctuary and after two years of medical care was released in his own enclosure where he has a pool with spring-water, a den and more than an acre of trees and shrubs. His story resonated deeply with our group and we chipped in to “adopt” Max on behalf of Traveleyes. 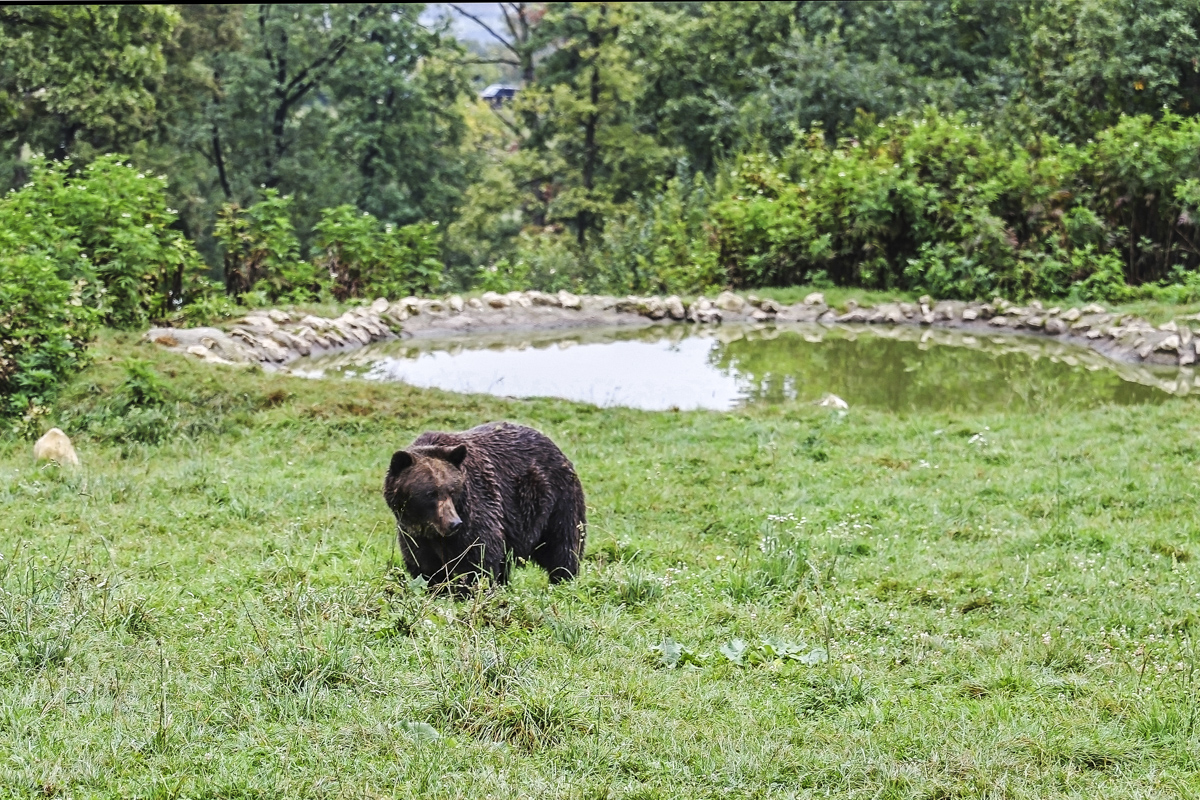 We spent our final four nights in Viscri. This remote farming village is not far from the wonderfully picturesque fortified medieval city of Sighisoara. Sighisoara, which we visited one afternoon, is no tourists’ toy town. Although many of its houses and farmsteads have been restored, and some turned into guest houses, it remains a real working rural community. The horse-drawn carts trundling around the village and fields are as likely to be carrying wood and farm supplies as tourists on an excursion. 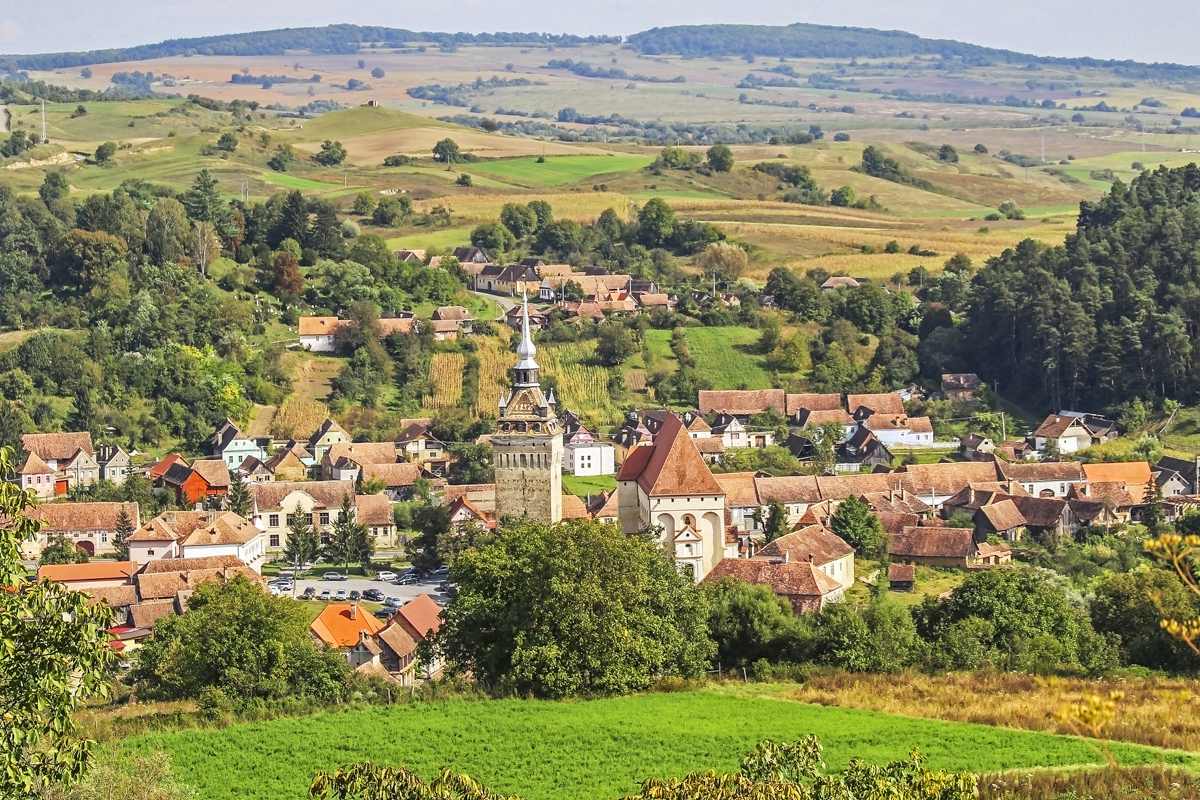 Visitors are woken early each morning by the sound of goats with their bells and cows meandering down the Main Street and out to the grazing pastures beyond the village. Our group first visited Viscri’s forge where working horses were being shod. After, we walked out of the village to a guitar-playing tile and brick maker whose craft is as much in demand now as it was in the past. We also spent a couple of hours in a pottery in the nearby village of Saschiz where the VIs and their sighted friends tried their hands at using the potter’s wheel, with varying results. 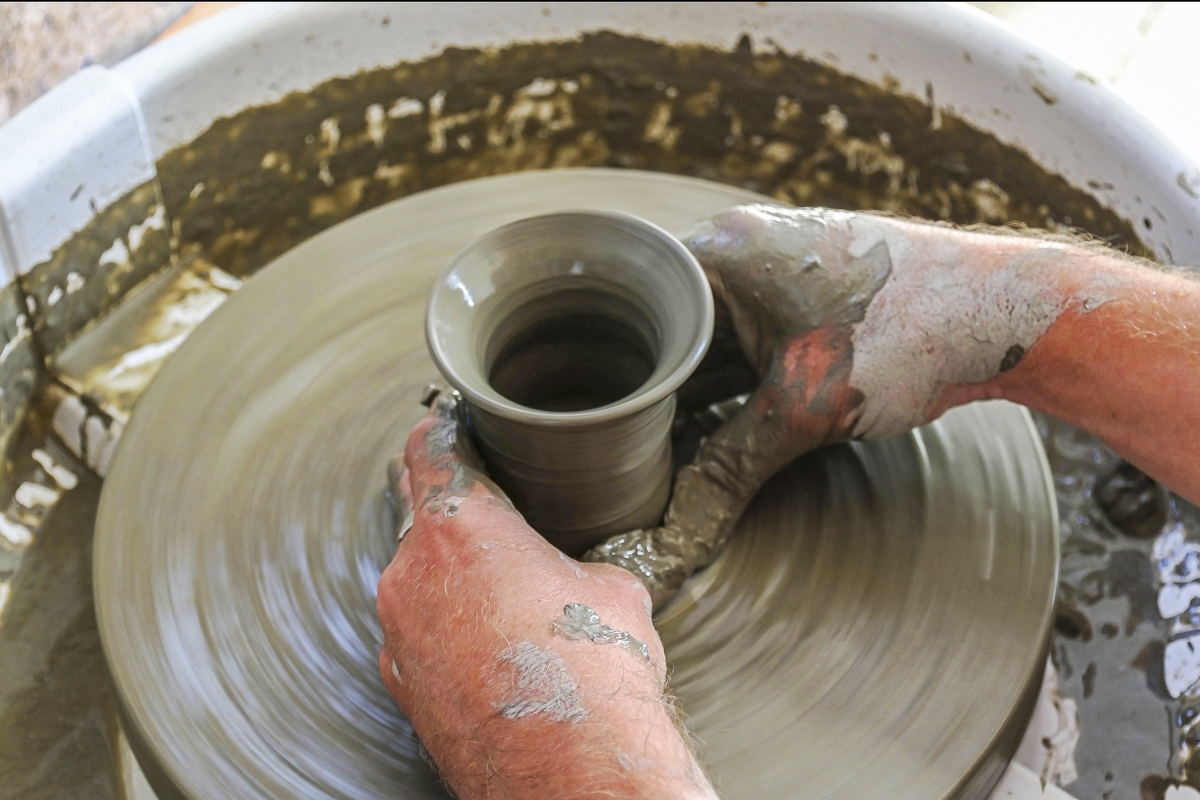 Such is its local importance that Viscri has been designated as a World Heritage site by UNESCO and one of its most celebrated buildings is a fortified church, parts of which date back to the twelfth century when the Saxons colonised this part of Transylvania. These days its congregation numbers barely a dozen and services are rare but volunteers work hard to protect the integrity of the church and its ornate 18th-century organ as well as a museum of country crafts and its beautifully preserved fortifications. Viscri also has an unexpected link with the UK because our own Prince Charles is an enthusiastic patron of the village. He bought a house there twenty years ago which he renovated and it is now used as a guesthouse for paying customers. 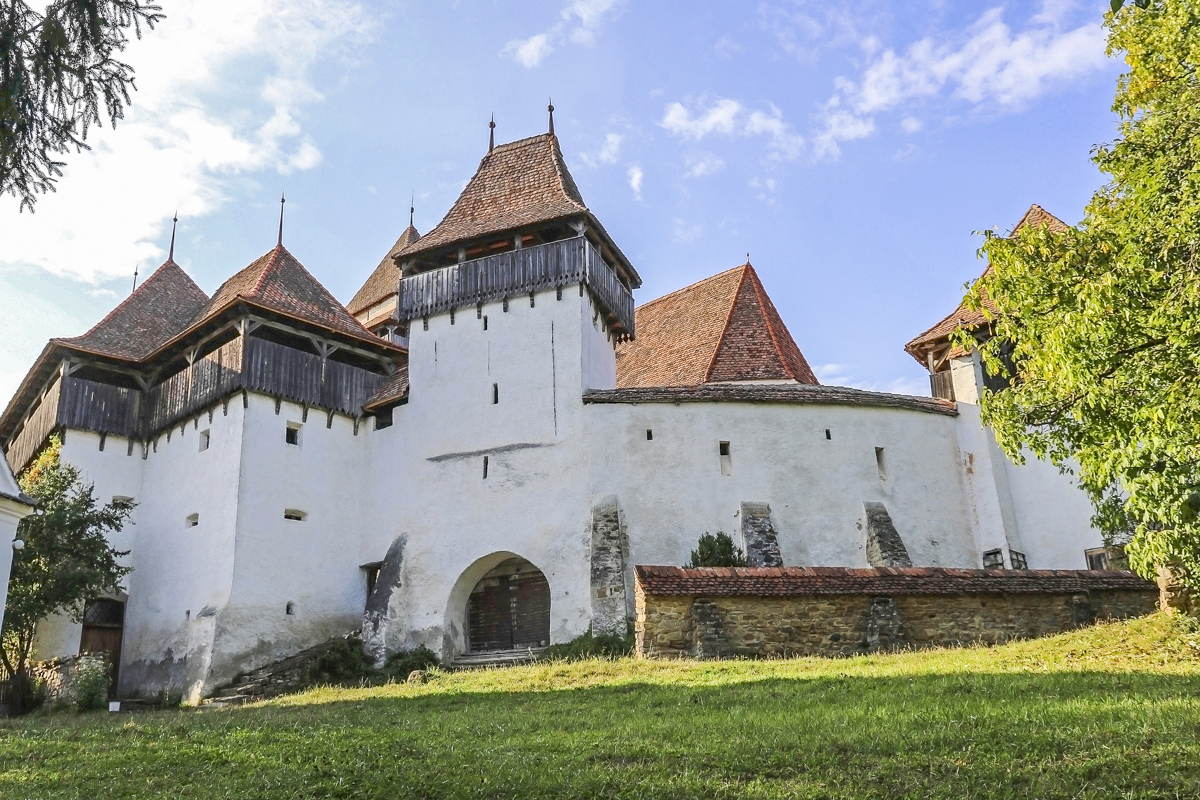 On our final day we were taken on carts drawn by horses, up through pastures to enjoy the flora and fauna on the meadows above and around Viscri. For me this excursion was particularly poignant, witnessing the joy it brought to the blind traveller I was guiding. A keen gardener back home in the UK, he would gently touch the plants, leaves and flowers being described to him and grin with delight when he recognised a leaf shape, a flower or herb scent. He would touch the leaves so gently and be amazed by the different shapes he handled. As the afternoon drew to a close and we headed back to Viscri, we rattled along in our horse-drawn carts through pastures full of grazing goats and cattle. A couple of hours later we stood in the main street as dusk fell watching the same cows coming home for the night – each one knowing exactly where to turn off to its own stall. 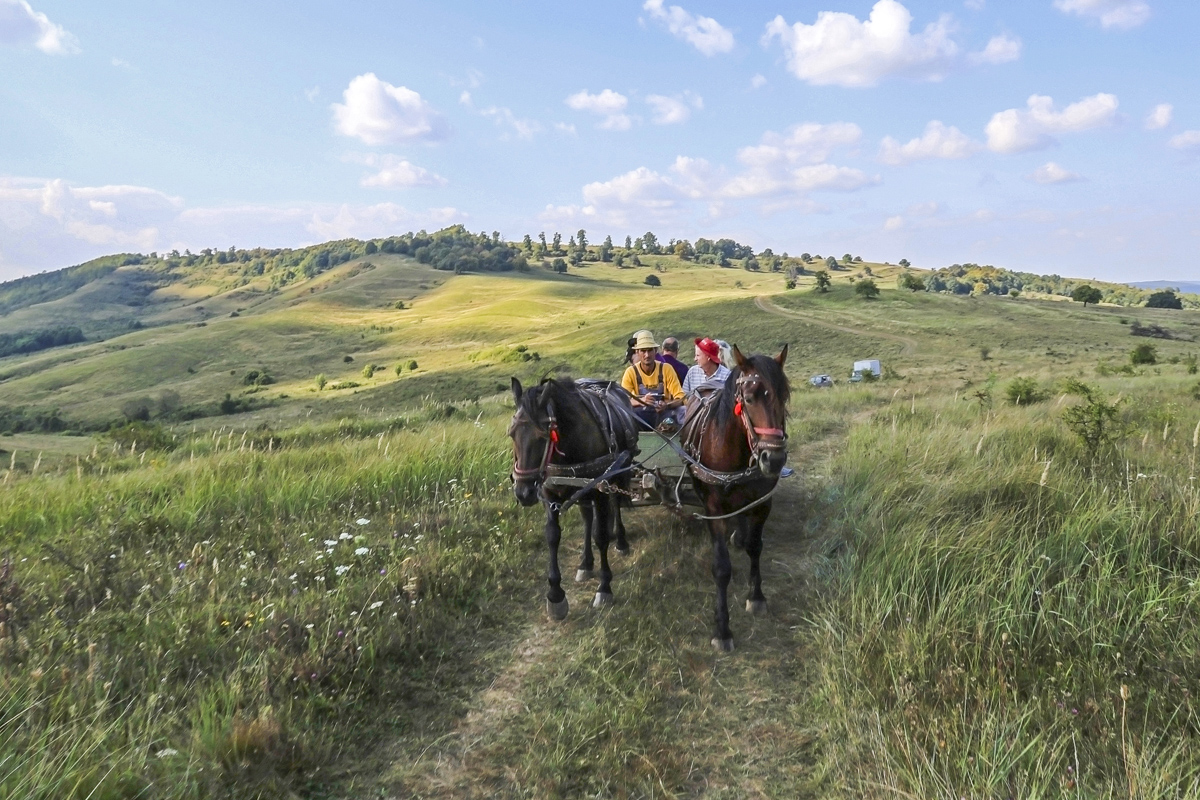 It’s a way of life that hasn’t changed much in a century or more and it was a privilege to share it for just a few days with my new blind, visually impaired and sighted friends in this wonderful and entrancing part of Transylvania.