The Pas de Calais is a department in northern France named after the French region that borders the Strait of Dover. The Strait of Dover connects the English Channel with the North Sea. The coastline of this region, known as the Opal Coast, is closest to England and easily accessible by land, air and sea. It features two capes, and several seaside towns including Calais, Boulogne sur Mer and Wimereux. I started my visit here with a bracing walk around the Cap Blanc-Nez. 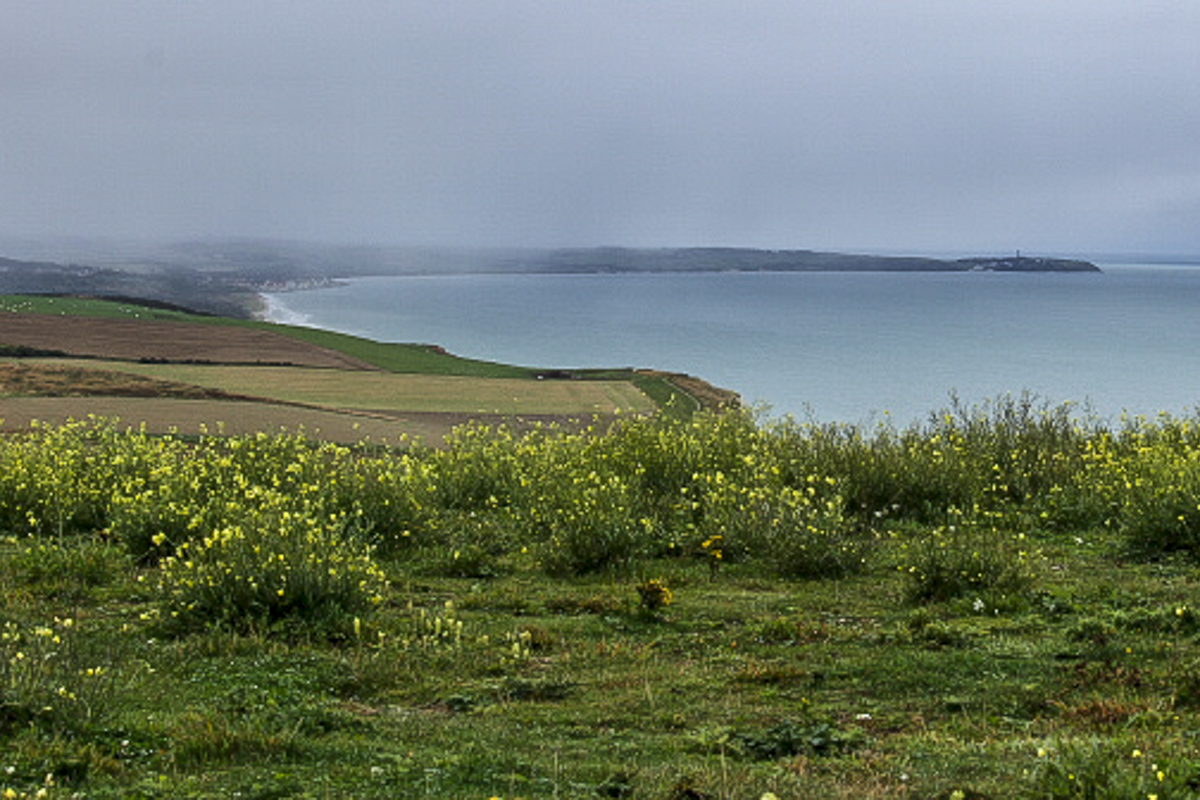 A Tour of the 2 Caps Brewery

My next stop was the 2 Caps Brewery where I met the passionate master brewer Christophe Noyon whose family owns the farm where the brewery is based. Although they grow their own barley it has to be sent to Belgium to be malted due to a lack of suitable facilities in the region. Otherwise, the whole process takes place on the farm including the bottling. After a tour of the brewery I had a tasting of four beers brewed there. Christophe Noyon has worked with the legendary cheese-maker Philippe Olivier to produce some excellent cheeses using his beer. The Belle Dalle cheese is made with a strong real ale of the same name. This cheese is aged by a process known as washing and the result is a delicious, strong, creamy cheese. 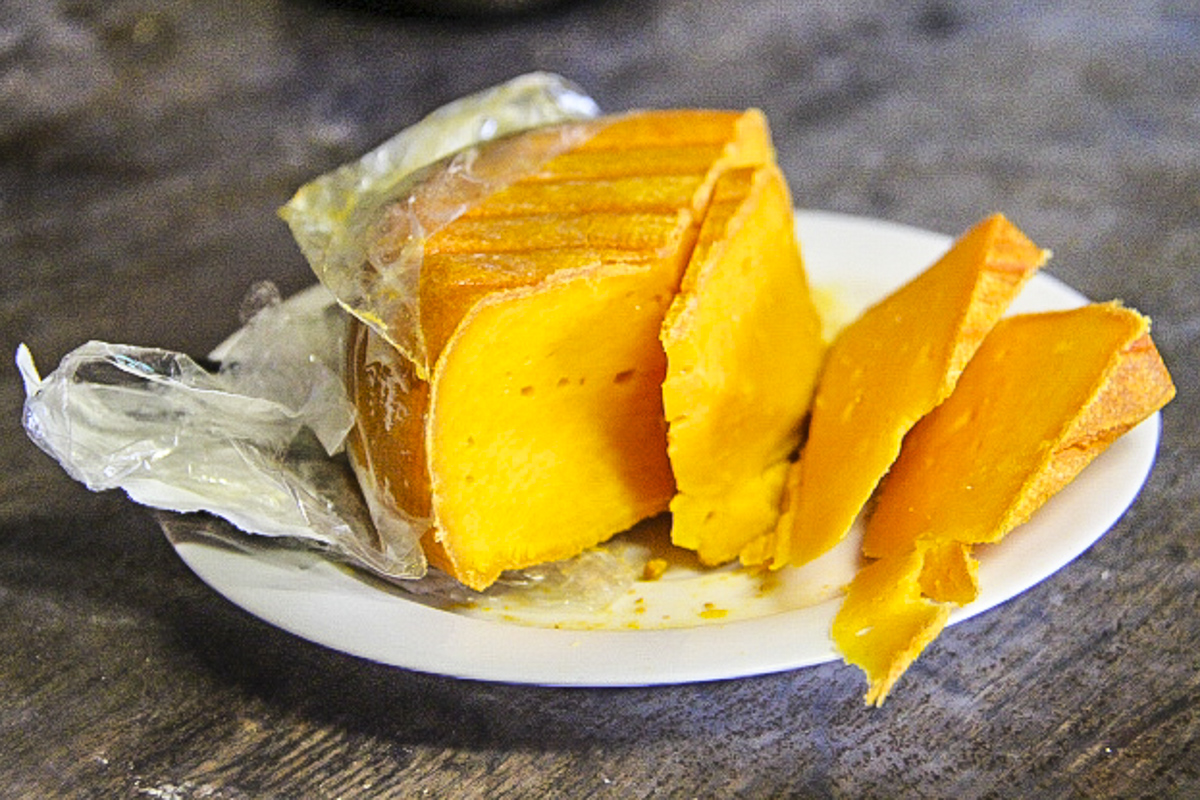 Dinner at L’Aloze, a Brasserie in Wimereux

L’Aloze is a brasserie at Hotel Atlantic in Wimereux. This town is famous for its many unique buildings from the Belle Époque era and the Hotel Atlantic occupies a splendid example of this style of architecture situated on the sea front. It was very pleasant strolling along the promenade to the restaurant watching the sun setting over the sea. 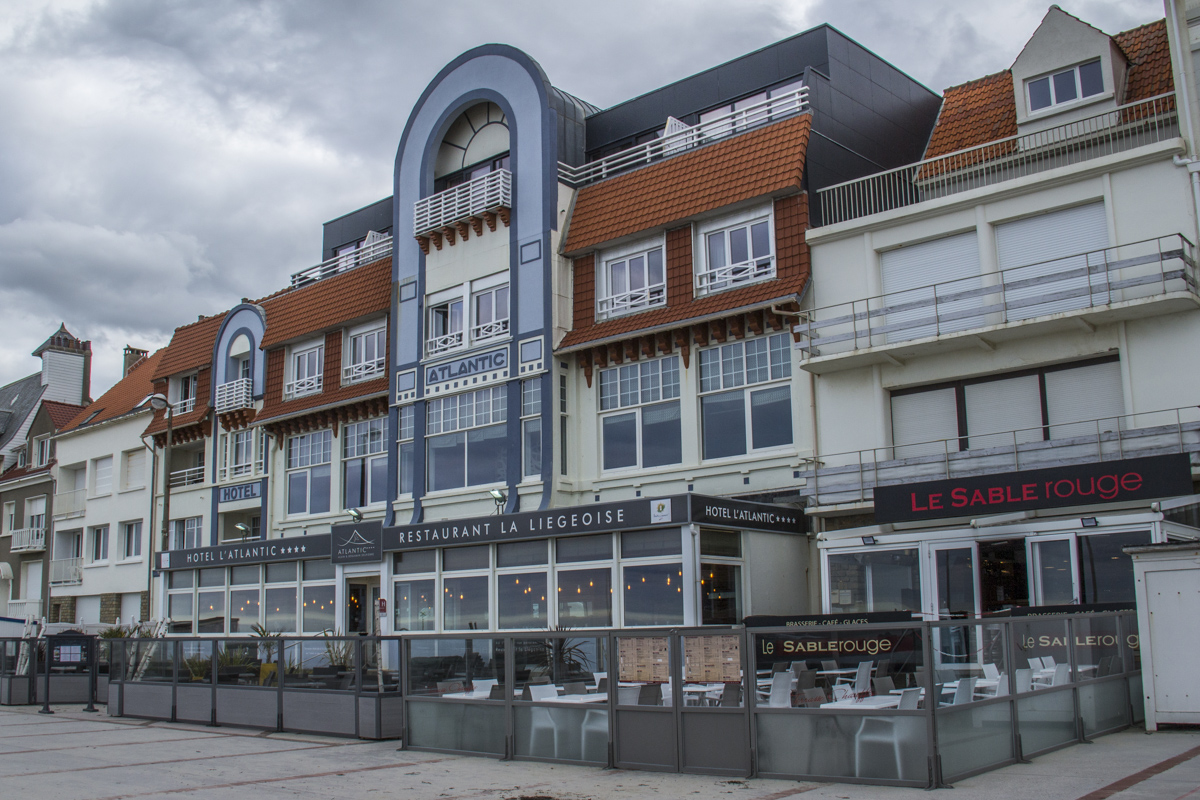 The large, open restaurant was very busy and the buzz of diners’ conversations around me created a comfortable ambience. The food was extremely good. My smoked salmon starter was the perfect combination of some really tasty smoked salmon with fresh bread and a light butter mousse. This was followed by a perfectly cooked sea bream with a crispy skin, accompanied by pumpkin purée – an elegant sufficiency and a great start to my culinary adventure. 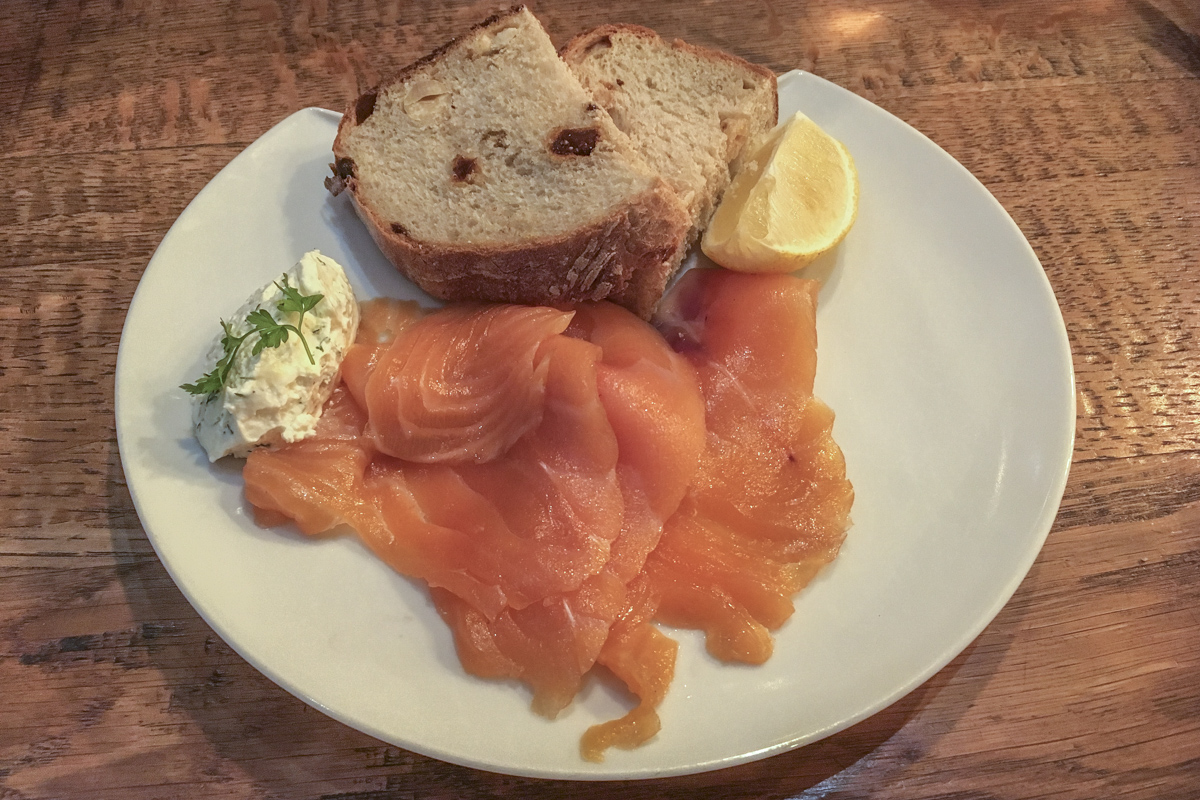 Lunch at L’Ilôt Vert, a Restaurant in Boulogne sur Mer

Boulogne sur Mer has two very distinct areas, its sea front and its fortified town. The restaurant L’Ilôt Vert is on one of the narrow cobbled streets in the walled town and occupies several small rooms with a courtyard at the back. I had a very unusual starter which was not at all what I expected from the description on the menu. To refer to it as a smoked salmon fish cake does not do it justice. But that is the best description I can think of for the small, round, deep-fried ball containing potato, courgette and flakes of smoked salmon. It was lovely. My main course was duck, the right shade of pink and served with celeriac purée on a very attractive and unusual plate. 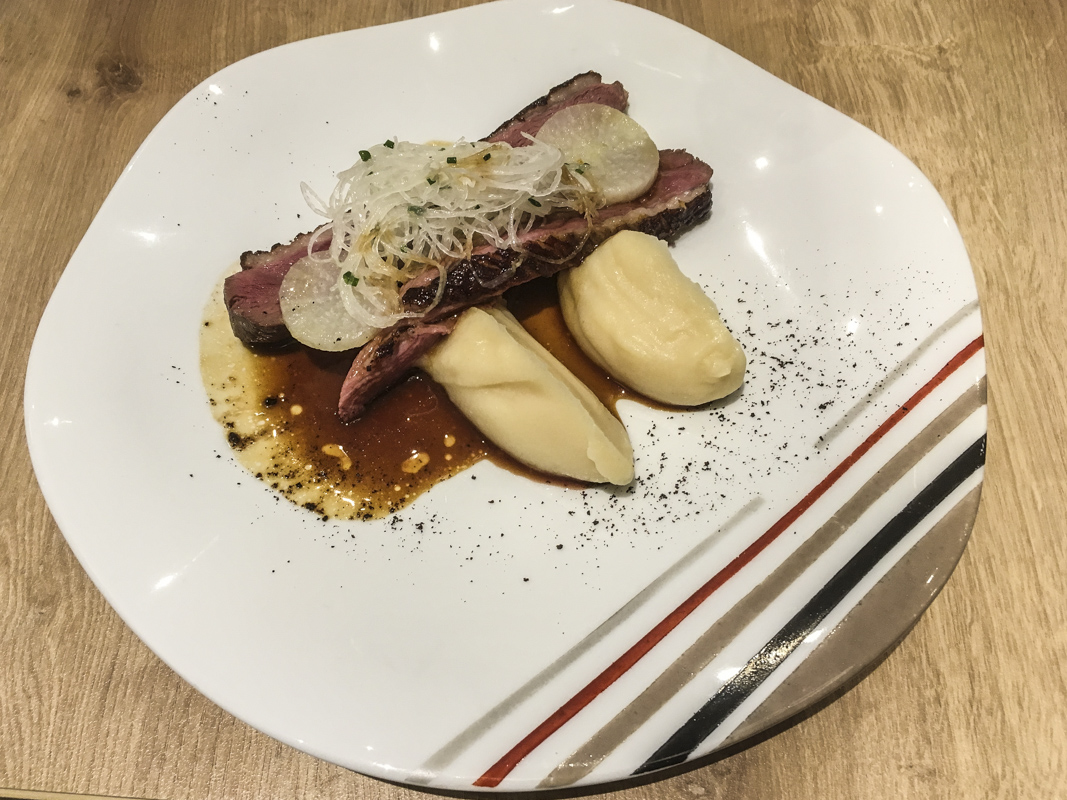 My meal in this restaurant started with a delicious amuse bouche comprising a tiny water melon drink and a very small savoury bun with some ham on the top. At the end of our meal we were offered a sweet and salty treat – very small sweet, creamy rice pudding topped with a crunchy, salty, mixture. It was divine. and a great way to end the meal 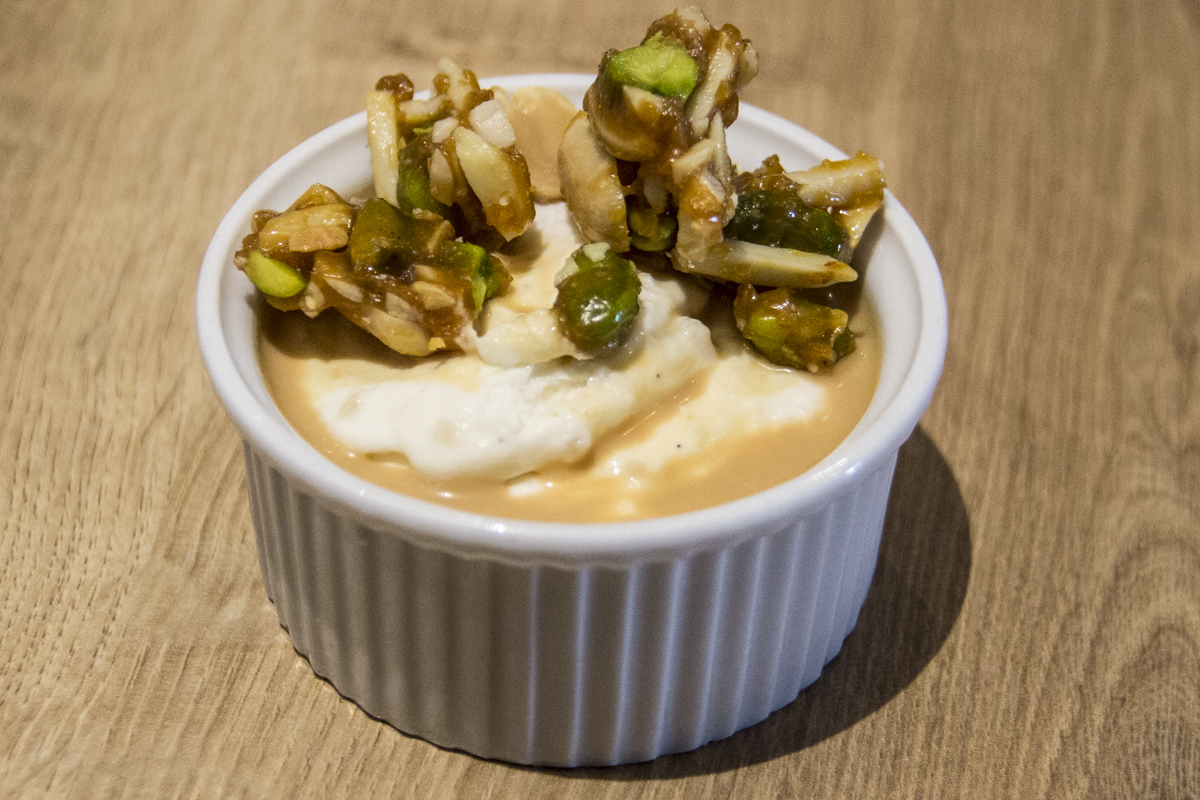 La Matelote restaurant is on the long sea front of Boulogne sur Mer at one end of the hotel of the same name. The hotel has grown up around this Michelin Star restaurant which was established by a local man, Tony Lestienne, in 1979. It was awarded its star in 1982. As the restaurant has expanded with the addition of a hotel it now occupies several elegant dining rooms. I dined in the original restaurant with a good view of the chefs scurrying around the kitchen. My meal was preceded by an excellent amuse bouche – three tiny helpings of different appetisers.

I started with the fish soup which was very tasty and just the right consistency – thick but not too thick. My main course was the grilled salmon. Not very adventurous I know but it is my favourite dish and the flesh glistened with pink perfection when it was placed in front of me. For my dessert I asked for a fresh fruit salad expecting a mixture of fresh fruit chunks in a bowl. Instead I was presented with a magnificent plate of food. Three assorted sorbets were balanced on top of a heap of finely chopped pineapple and topped with a brandy snap. I had not realised the fruit salad was one of their signature dishes – it was stunning and most enjoyable. This restaurant certainly deserves the star it has proudly displayed for over thirty-five years. 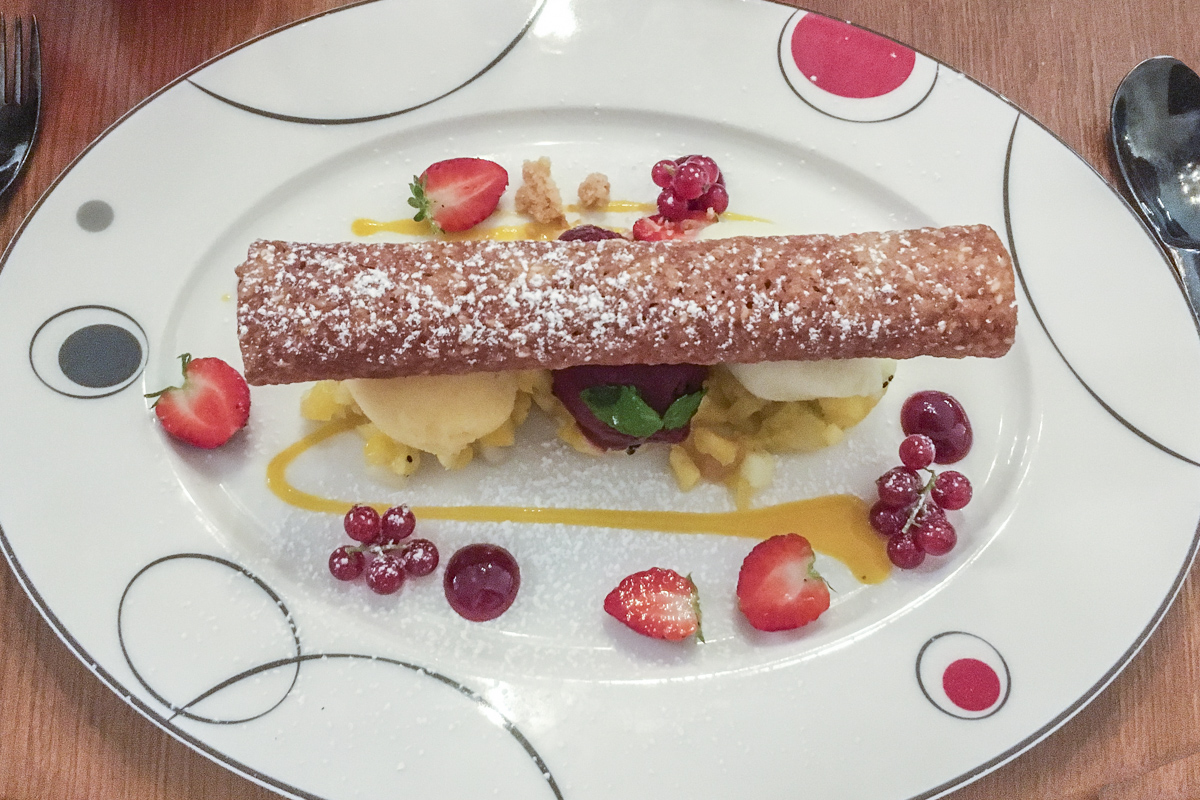 As I approached le Grand Bleu in the port of Calais I thought I was going to be eating in a small café. I soon discovered the exterior of this restaurant, situated in a line of restaurants, is very misleading. Inside, every table on the two floors was occupied and the waiters were gliding around them quickly and efficiently. My waiter read out the choices which all sounded delicious but I needed some help with the translation. My first course looked and tasted amazing – two little fajitas filled with a coarse fish paté. This was followed by another fish dish – a piece of Pollock balanced on a small heap of purple potatoes set in a semi-circle of green broccoli purée. 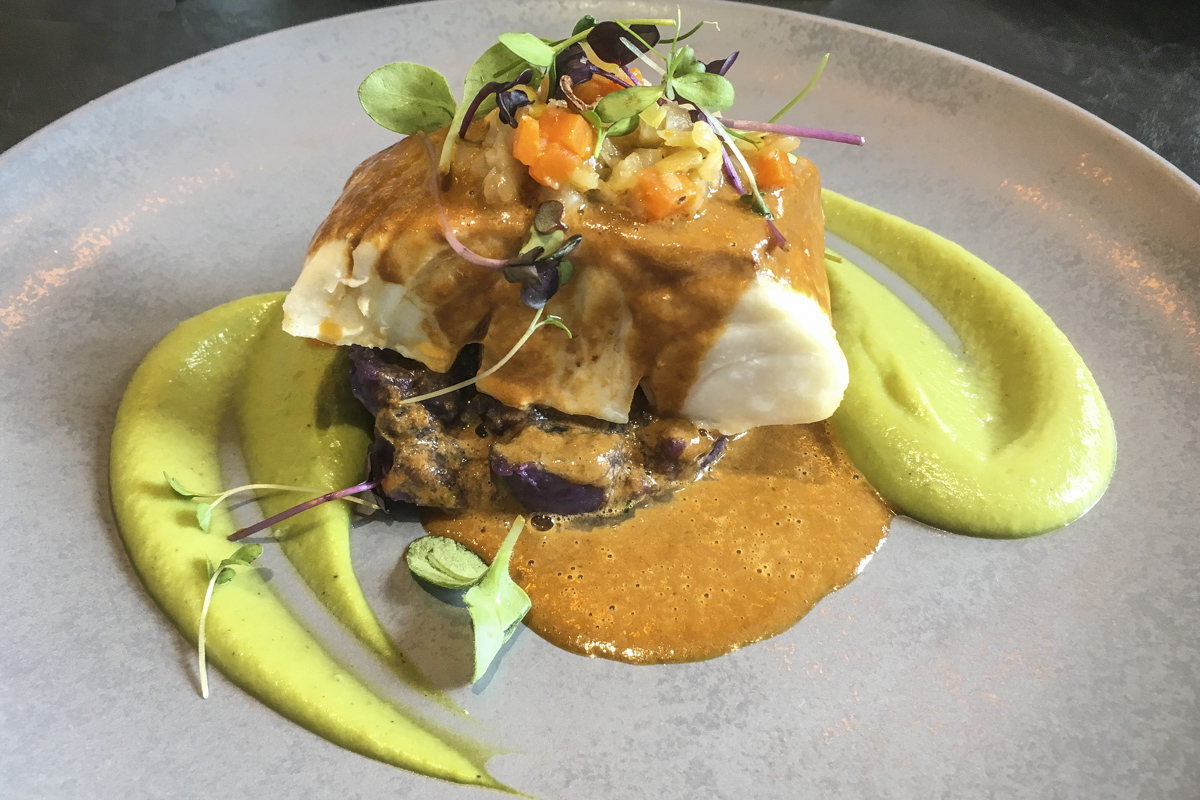 The thought of an After Eight parfait as a dessert was irresistible and it was as wonderful as it sounded. A mint parfait on a chocolate base topped with a light, frothy cream. Fabulous. 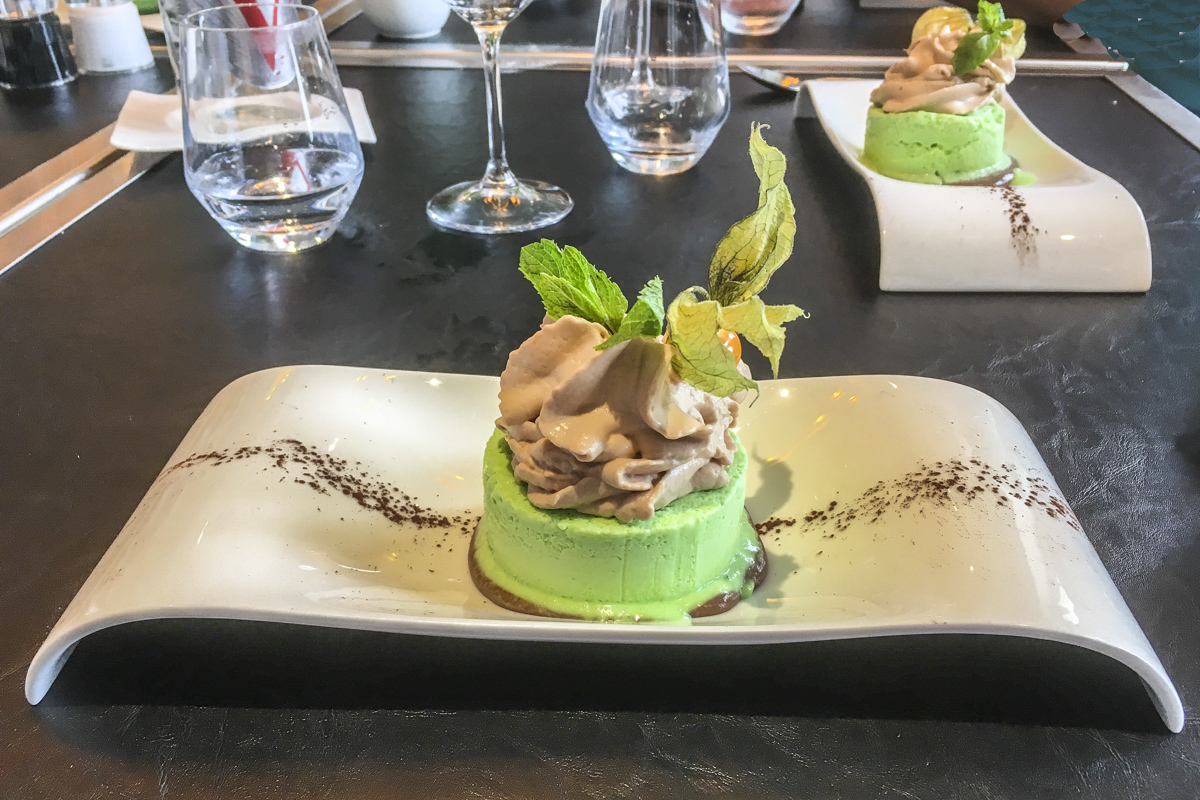 This meal also featured an amuse bouche and a sweet treat to finish but it was a race to this finish. It was time to check in for my ferry back to England. My French culinary adventure – four incredible meals in two days – was at an end.