I was like a child in a sweet shop, running from one glorious bloom to another, camera snapping frantically. Exbury Gardens in the New Forest was welcoming the spring with a fantastic display of magnolias, camellias, rhododendrons and azaleas. Magnolias are my favourite. The first magnolia was brought to Britain in 1688 by a missionary from America. This sparked a lot of interest in the magnolia and by 1800 most of the American species were being cultivated here. The magnolia is also an indigenous plant of Asia. The most significant introductions of these species occurred at the beginning of the twentieth century due to the activities of two famous plant collectors George Forrest and Ernest Henry Wilson. George Forrest was sent by the Royal Botanic Gardens in Edinburgh to collect plant specimens in Asia. Of the thousands of plants, he collected eight were magnolias and three of the species were unknown in England. Ernest Henry Wilson introduced eight new species of the magnolia to the UK making him the most successful magnolia hunter of all time. 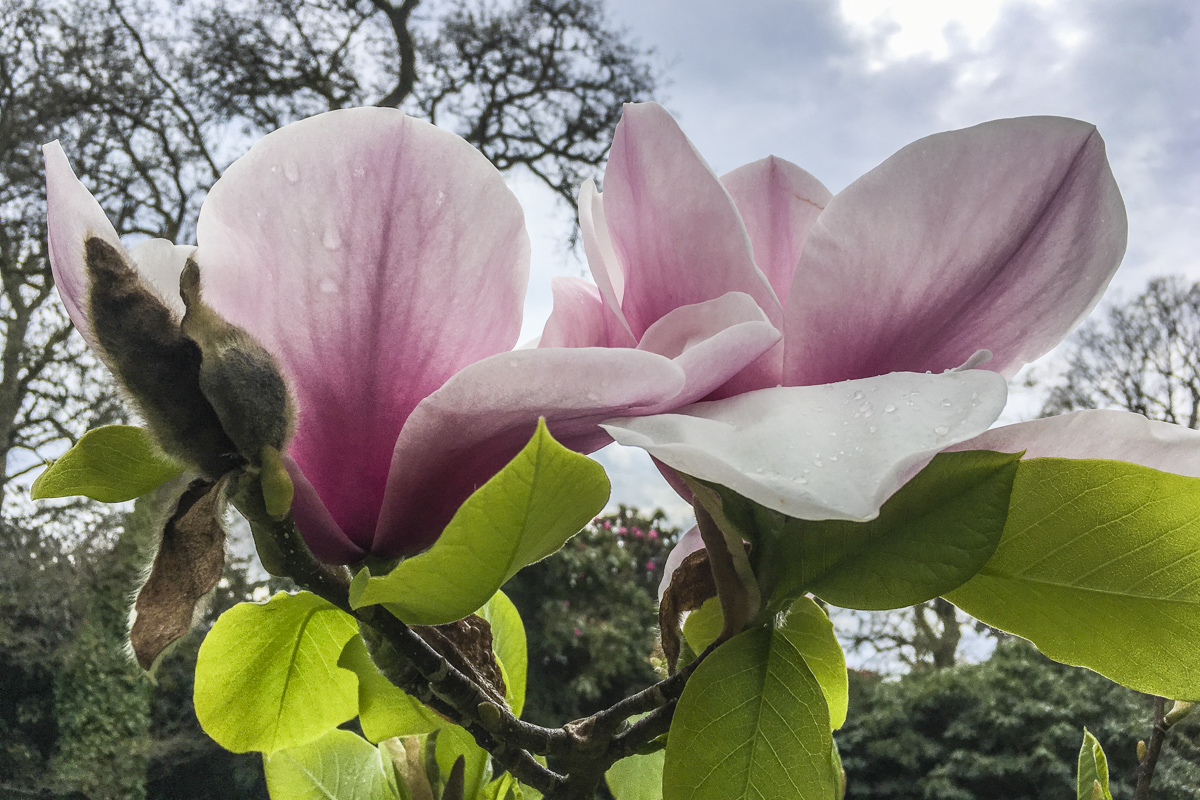 I strolled along the Camellia Walks occasionally coming across small clearings with benches to sit on and a sprinkling of primroses in the grass around them. The original Camellia Walk was planted during the 1930s and includes many Exbury hybrids such as camellia Charlotte de Rothschild, named for a prominent member of the famous Rothschild banking family that own the gardens. The New Camellia Walk was created in 1996 using lots of American hybrids, for example, camellia Bob Hope. 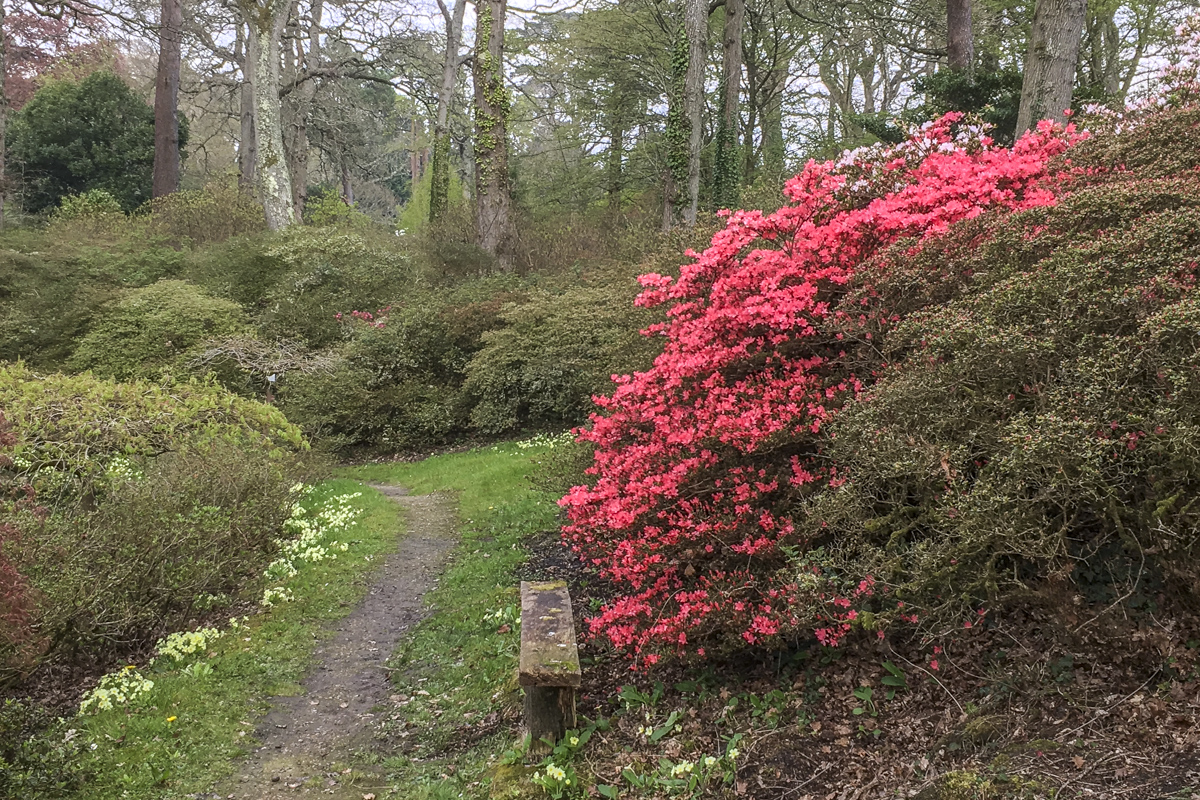 Camellias are native to China and Japan where they grow wild. They were introduced to Britain in the 1700s coming here on the ships of the East India Company which brought back exotic items from Asia. As the tea trade with China expanded many more of these plants were being brought to Britain. The round trip took about a year which was a long time for a plant to survive so it was manly the cultivated varieties that were brought here. 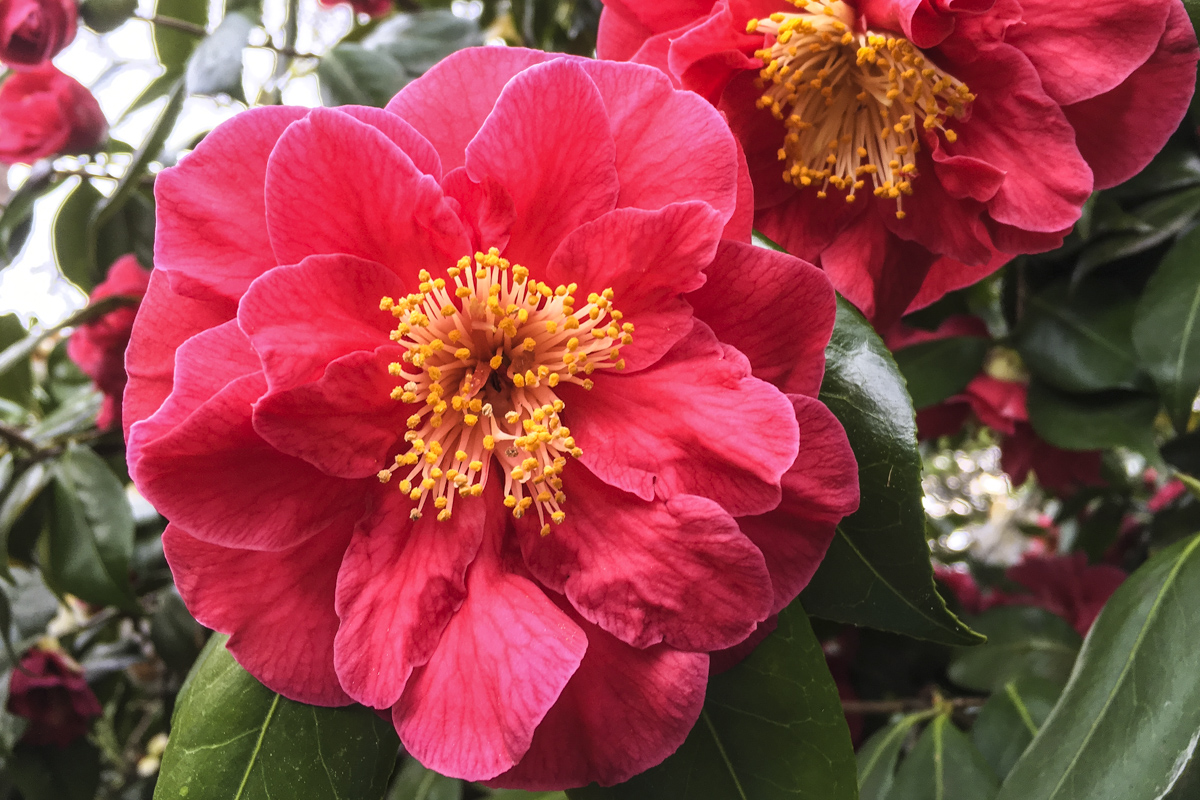 The vivid colours of the delicate camellia blooms certainly brightened up a dull spring afternoon. Some of these flowers were already finished but, unlike other flowers they were not dropping their petals one at a time. Instead, they fade to a crisp brown but still perfectly shaped flower. Soon the whole flower would drop to the ground. 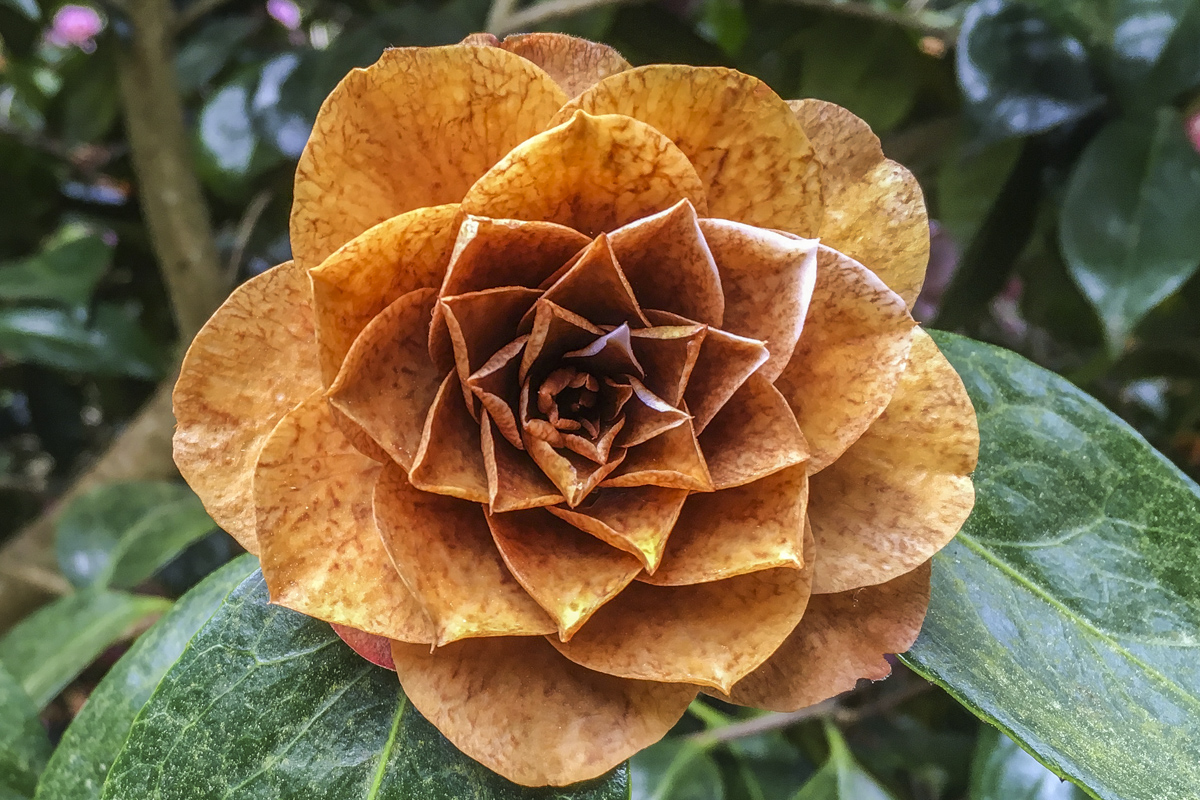 My wanderings took me into Home Wood The paths through this wood were flanked on either side by banks of rhododendrons. The variety of colours was amazing, ranging from a deep purple to a delicate white. The first rhododendron, the alpenrose, was brought to Britain from the Swiss Alps during the sixteenth century, probably by Huguenot refugees. But it did not flourish here. Since then different species of the plant have been introduced from a variety of places including Spain, America and the Himalayas. The original plants have provided the basis for the cultivation of many lovely hybrids but if neglected they revert to their wild state and become a nuisance. 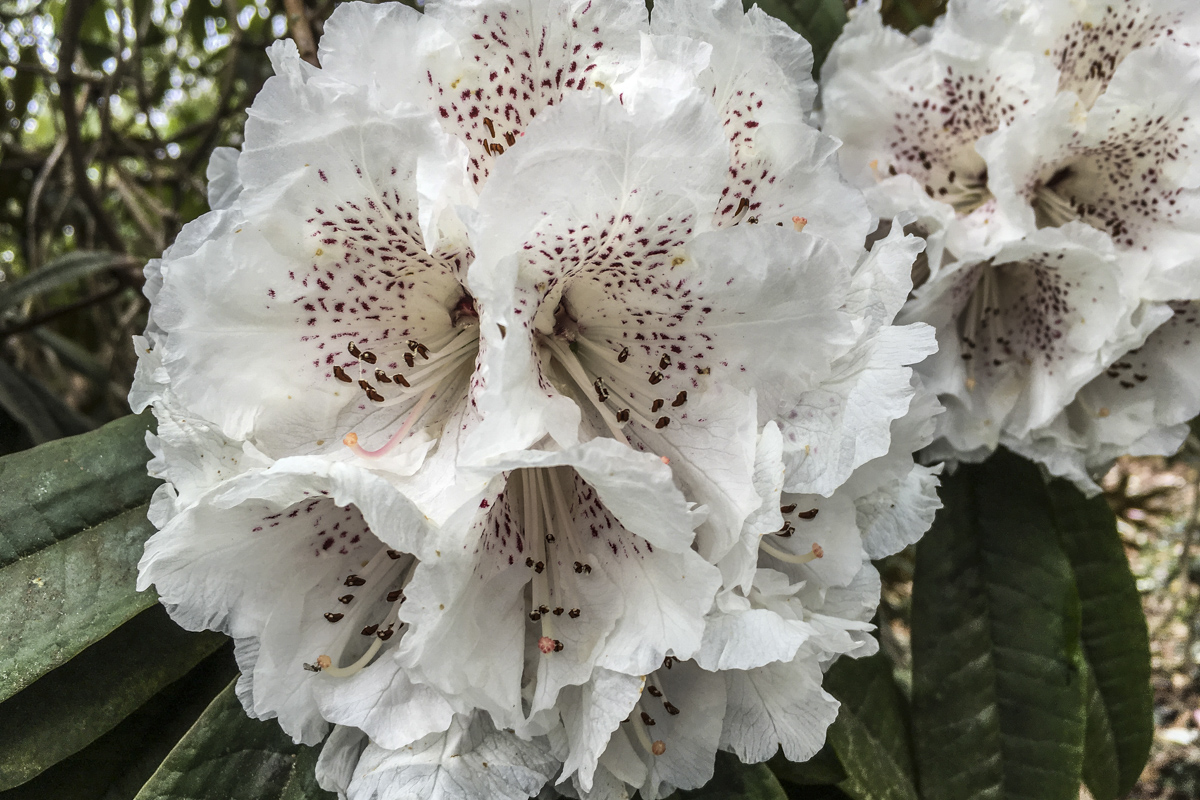 In the Azalea Bowl in Home Wood I found a mass of stunning evergreen azaleas reflected in the water of a large pond. These small trees are native to China and Thailand but are now grown all over the world. The azalea is a member of the rhododendron family but when it blooms it has only one bloom on each stem whereas the rhododendron has clusters of blossoms. 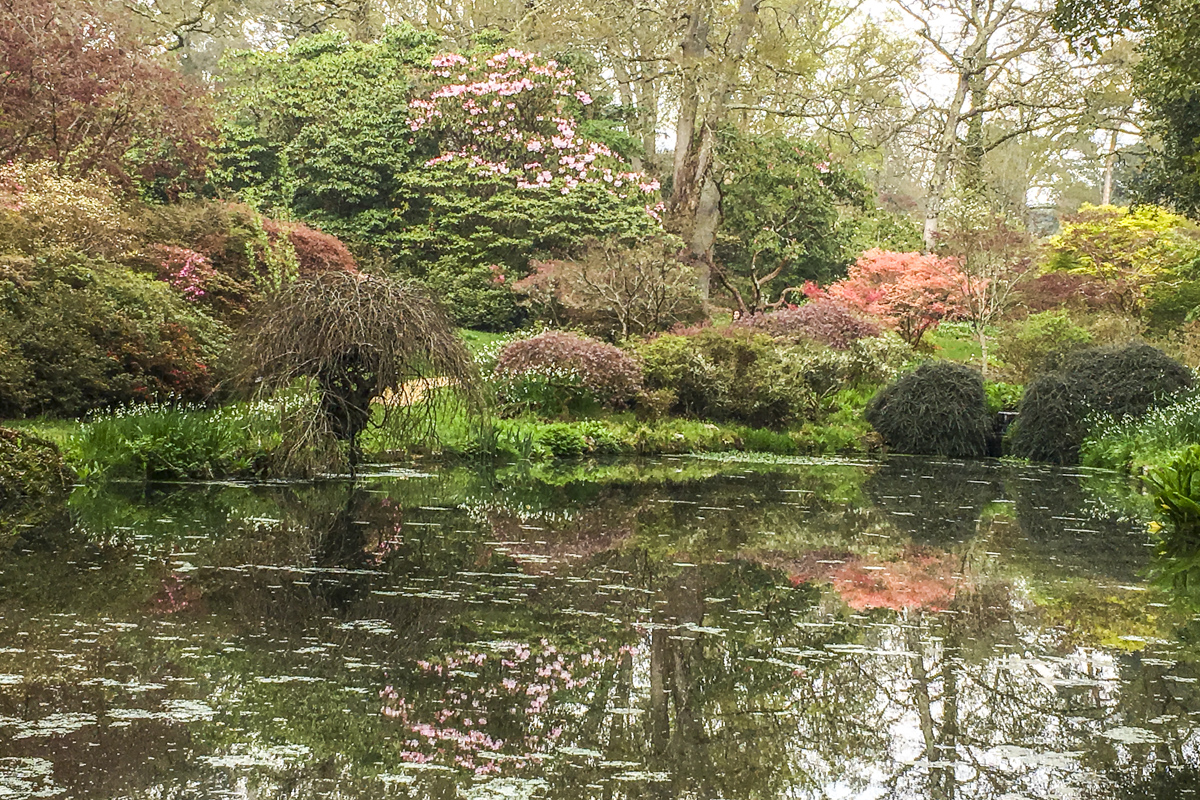 After exploring the Azalea Bowl, I made my way past the Cascades to the Top Pond. There are two bridges in this area of Home Wood, the Stone Bridge and the Japanese Bridge. The Japanese Bridge crosses a stream as it flows into the Top Pond. I paused on this bridge to enjoy the views of the pond on one side and the stream on the other. Japanese Maple trees also known as Japanese Acers fringe the banks of both orchestrating a fiery display of reds and oranges. Acers are native to Asia and in particular Japan, Korea and China. The Japanese were the main cultivators of this plant. Prized for their delicate structure and coloured foliage they were first introduced into Britain in the nineteenth century. 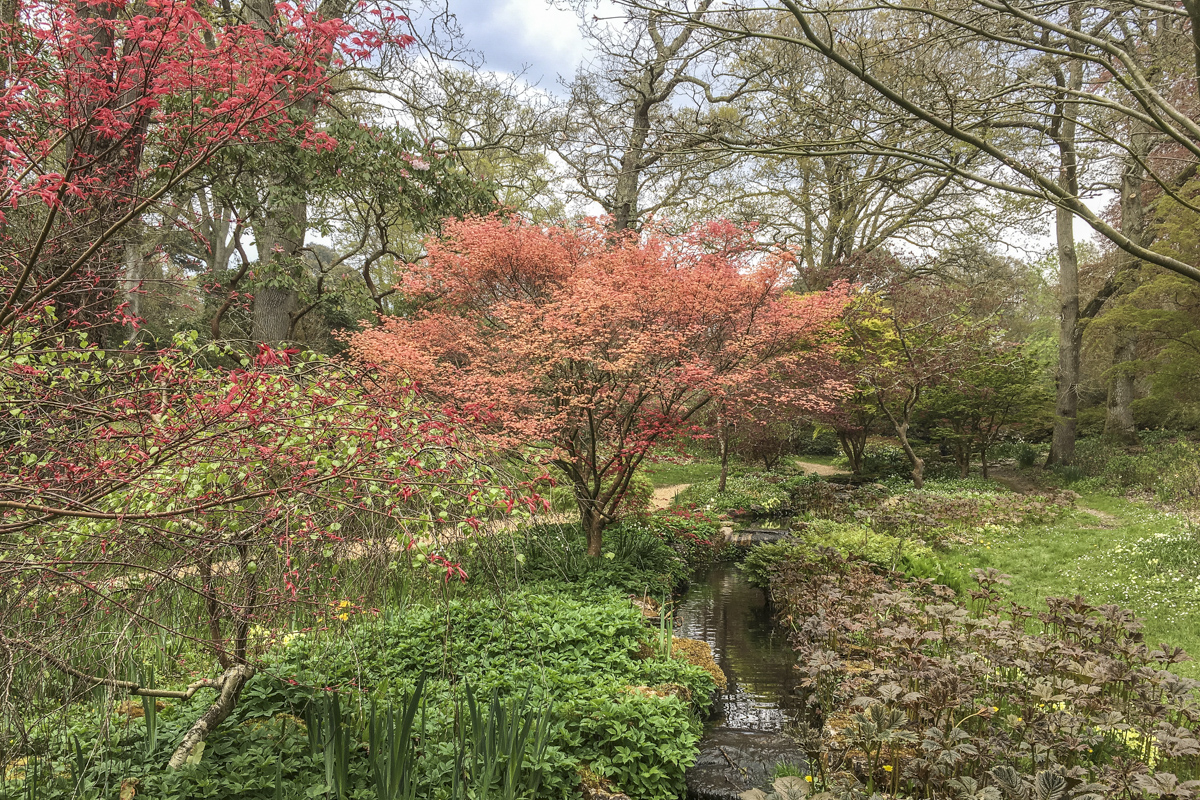 None of the plants I had admired so far were native to the United Kingdom so I had to wonder how they got here and in such abundance. Exbury Gardens was inspired by Lionel Nathan de Rothschild who was born into the famous Rothschild banking family in 1882. He had a vision, the creation of a fine garden and the money to fulfil it. As expected, he followed a career in the family’s very successful bank. In 1919 he bought the Exbury Estate beside the Solent. It was Lionel who built the neo-Palladian Exbury House around the original, smaller eighteenth century house. It is still there today, but not open to the public. 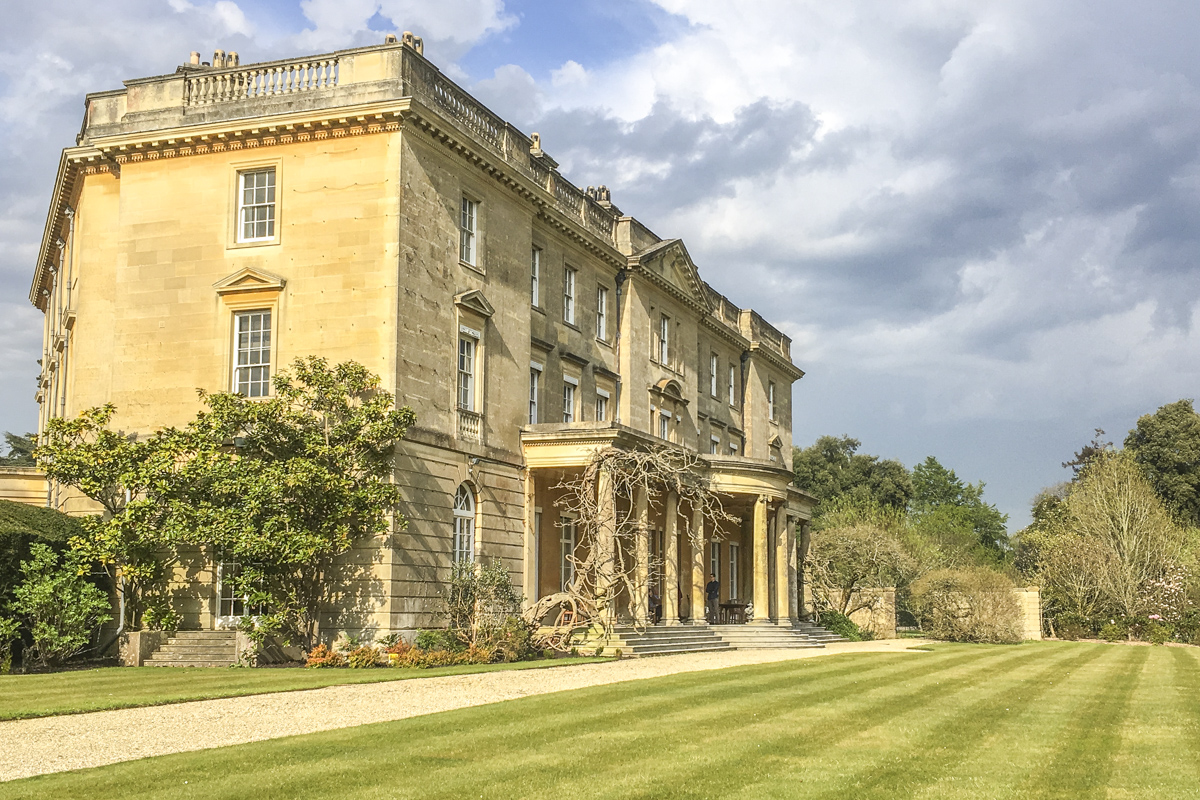 The extensive grounds around the house had a unique micro-climate that was ideally suited for growing rhododendrons. It was the time when plant hunters and explorers were bringing back seeds of unknown plants from remote places in the Himalayas and South-East Asia. Much of the woodland was cleared away so gardens could be laid out and an irrigation system was put in. The development of the gardens stopped at the outbreak of World War II in 1939. In 1942 Lionel died, Exbury House was requisitioned by the Admiralty and the family had to leave. When the family were able to return to Exbury Lionel’s son, Edmund restored the gardens and decided to open them to the public. Edmund died in 2009 but the family are still actively developing the gardens today. 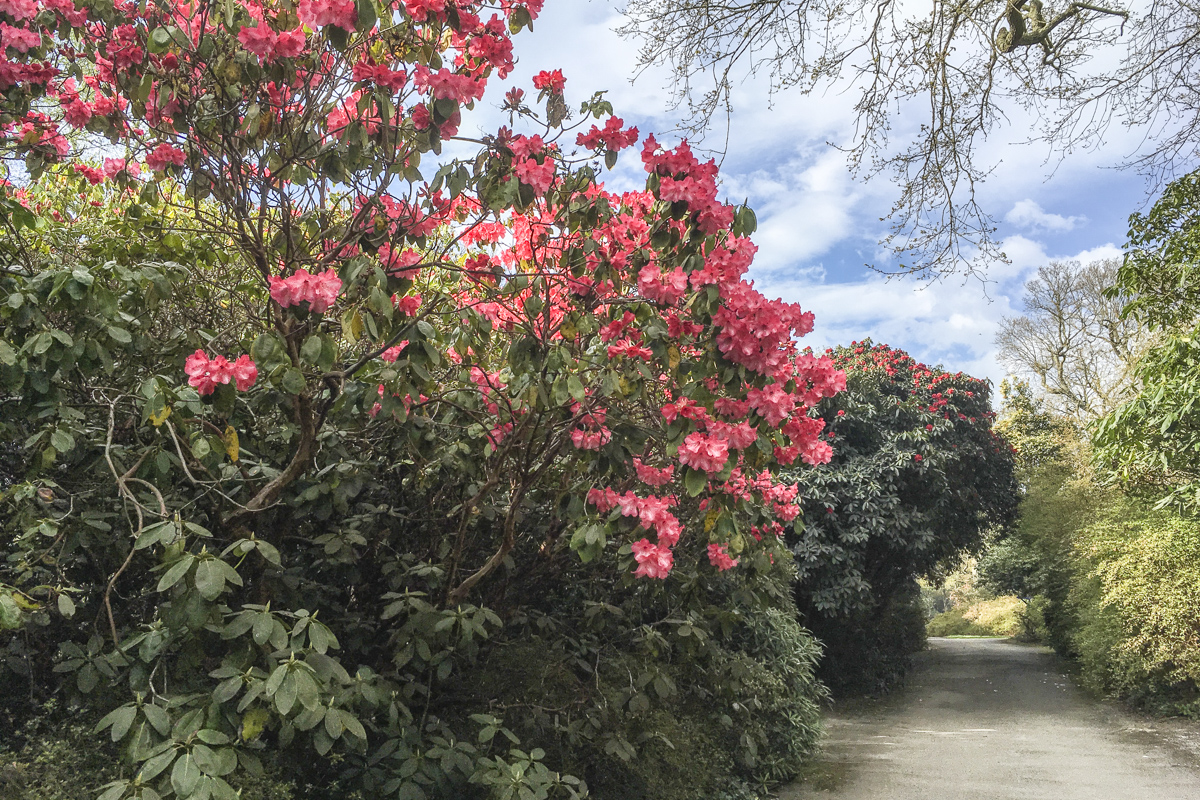 Having done two circuits of the Azalea Bowl so enraptured was I by its beauty I decided it was time to move on and followed the River Path to the banks of the Beaulieu River. This river is one of the few privately owned rivers in the world. Its estuary flows into the Solent which was why Exbury House was ideal as a base for training the troops during World War II. Today, it made a very natural contrast to the formality of the gardens behind me.

I could not linger for long by the river as time was passing and there was so much more to see. The huge rock garden spreads over an area of two acres and is probably the largest of its kind in Europe. Here I found some more rhododendrons, alpine and dwarf varieties. Moving on I just had time to explore the bog garden suddenly it was time to go – my sweet shop was about to close. 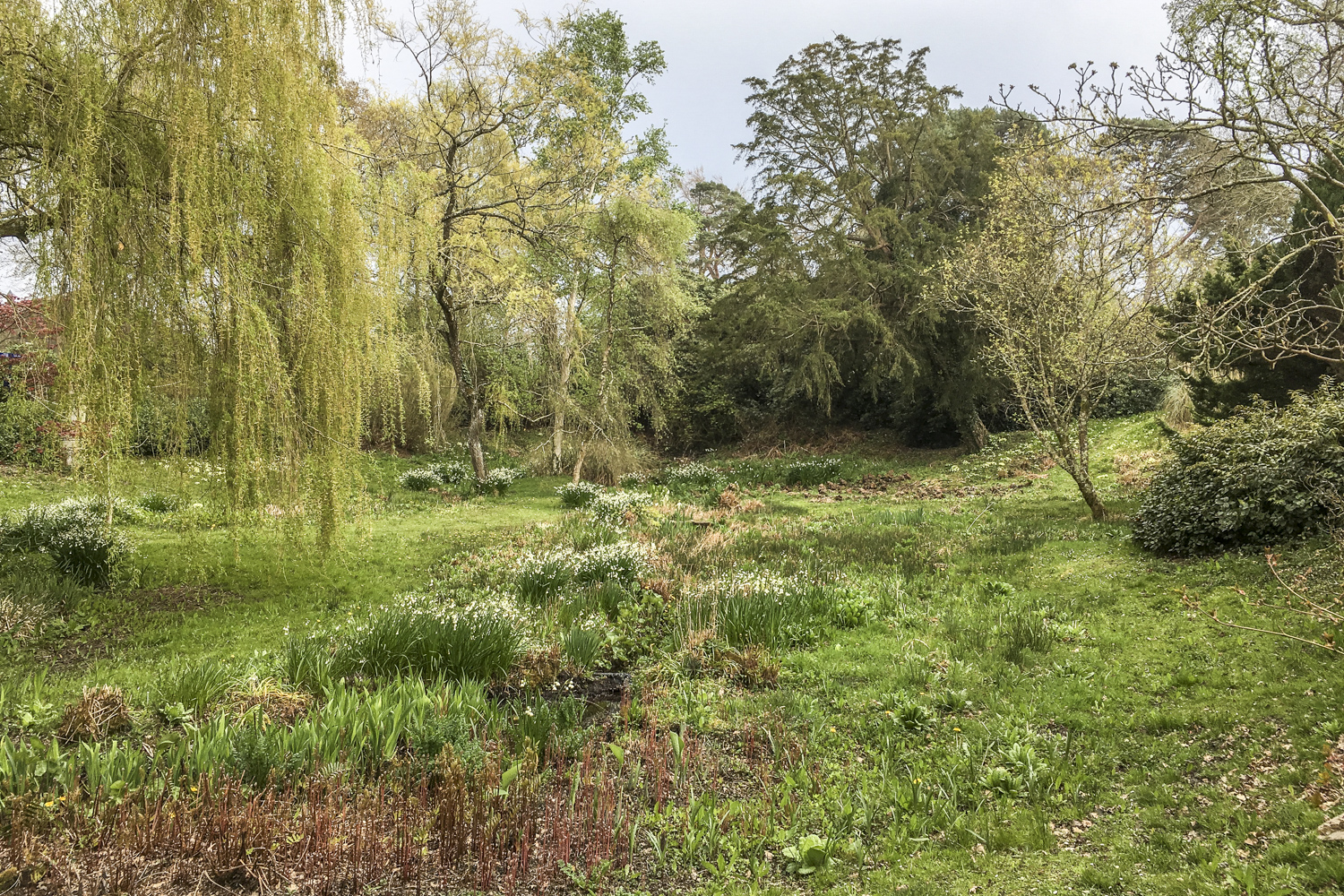 There was so much I had not seen or done. I had not ridden on the train or eaten at Mr Eddy’s. There were still many areas of the garden to explore – all changing as the seasons go by.