In 1731 a great fire swept through the small market town of Blandford Forum in Dorset. It destroyed ninety per cent of the town. Thanks to some unusual circumstances it was quickly rebuilt and today it is the best example of a small Georgian town in the UK.

During the mid-eighteenth century there were several town fires in Dorset which were generally attributed to the abundance of thatched roofs. They were not considered newsworthy for the London papers – with the exception of the Great Fire in Blandford Forum. Thanks to several wealthy landowners who lived close to the town it was reported as a national disaster. Donations were received from George II, charitable performances were held in a London theatre and an Act of Parliament was passed decreeing that Blandford should be re-built in brick and tile. William and John Bastard, prominent citizens of the town as well as being architects, surveyors and principal builders undertook the task of re-building the town. The result is a spacious Market Place where open-air markets are still held every Thursday and Saturday ringed by the most complete group of Georgian buildings in England. The Market Place is also the venue for a Farmers’ Market on the second Friday of every month. The Great Fire Monument stands in front of the church. 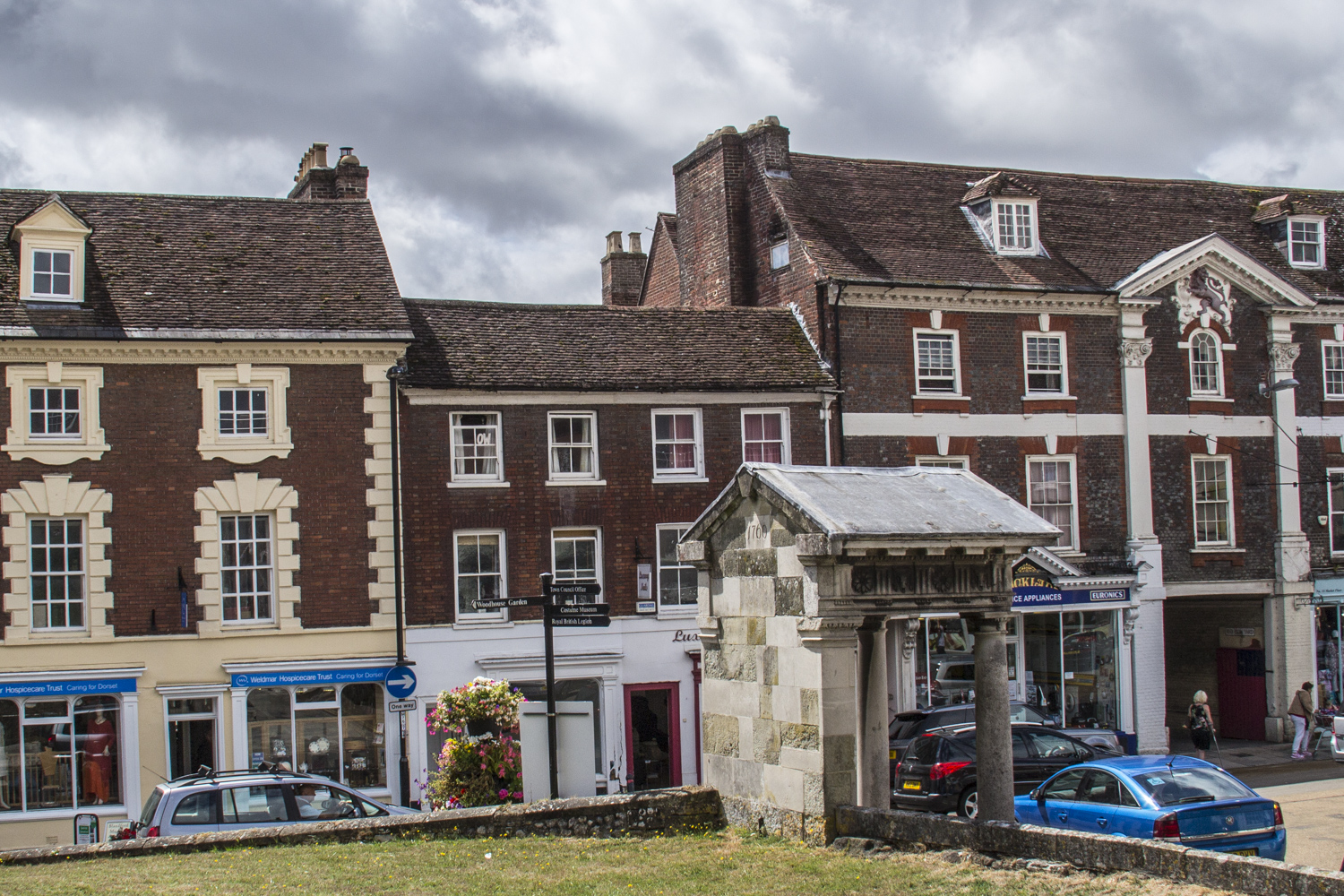 The Town Hall and Corn Market

Dominating the Market Place is the colonnaded Town Hall and Cornmarket. It was re-sited in order to create more space in the square. This building is comprised of three different areas. The Shambles in the open area beyond the arches is the venue for the Craft Market that takes place every other Friday. On the first floor, behind the large windows, is the old Cornmarket. This is the venue for the weekly indoor market. When the Town Hall was built in 1733 it was usual to include a Cornmarket where merchants traded their corn and this was common across England until the nineteenth century. As trade became centralised these buildings were used for other purposes, such as markets and social functions. The Town Hall is still used for council meetings although the offices are now elsewhere. 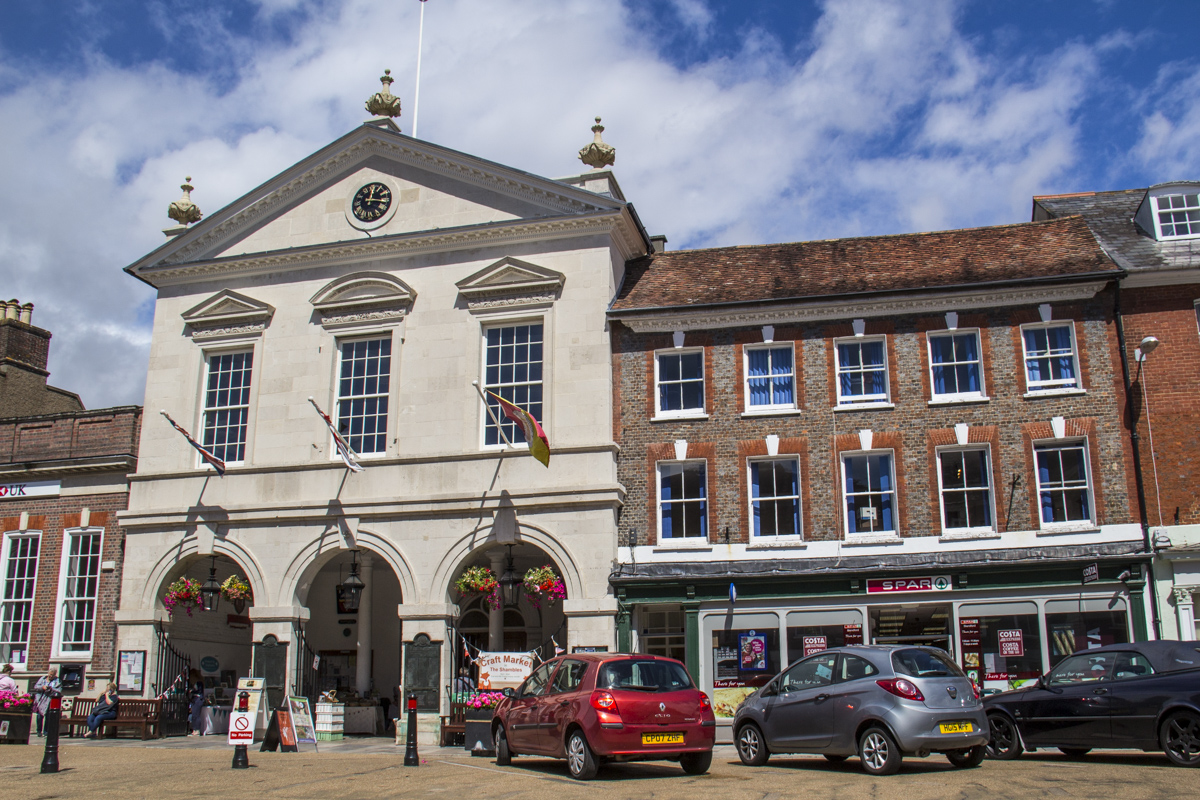 The Parish Church of Blandford Forum

The parish church of Saint Peter and Saint Paul occupies one corner of the Market Square. As the Great Fire raged through the town the parish church, built of stone with a lead-sheeted roof, was expected to survive. All the church records and items of value were gathered up and placed there to keep them safe. Minor fires in the roof were dealt with but twelve hours after the fire started the roof burst into flames. By then no fire engines, ladders or buckets were available and the townsfolk retreated in terror as the fire spread melting the lead that cascaded to the ground with the stonework. Designed and rebuilt by the Bastard brothers this church is one of the few Georgian churches outside London today. Twelve giant Portland stone columns with Ionic capitals line the nave on either side. The original plans had included a spire for the tower but this was never built due to lack of funds. In 1758 an iconic cupola was added instead. 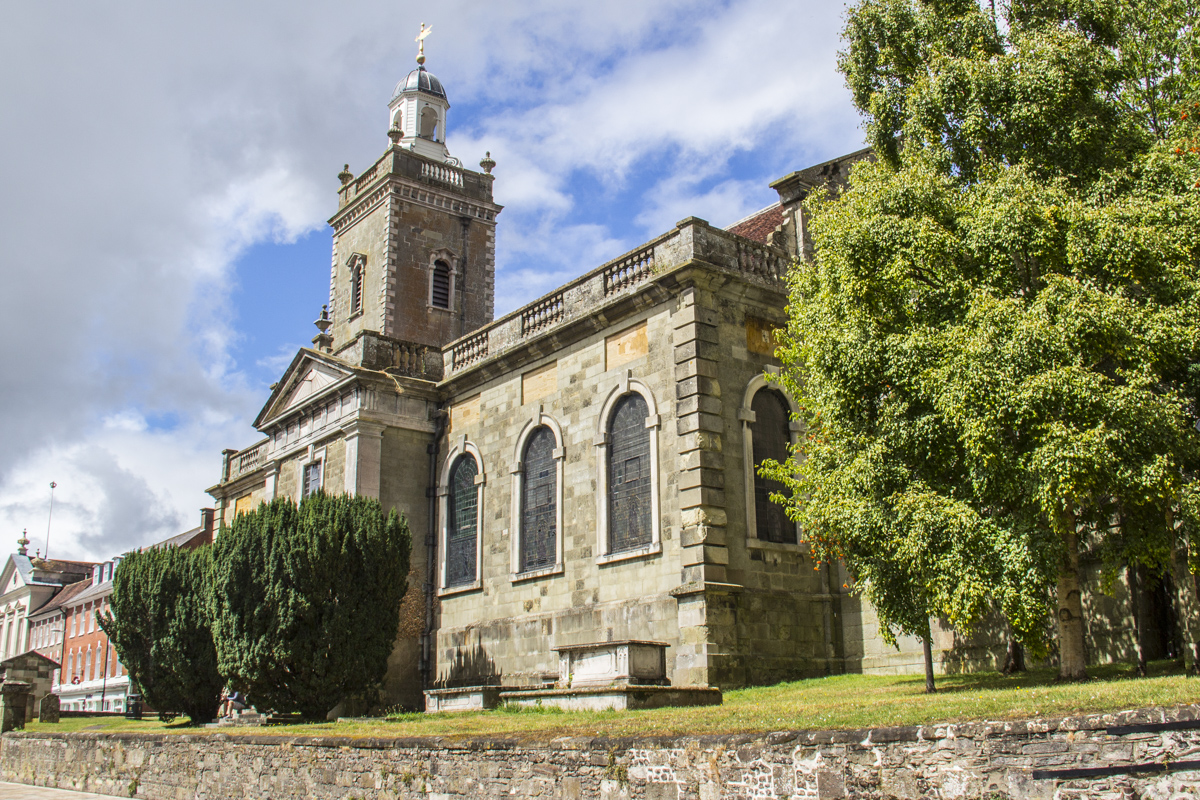 While I was exploring the interior of the church I met Christopher Curtis who showed me some graffiti scratched into the wooden panelling behind the font. Cleary dated 1796 it is thought to relate to the time when the bells were installed. Christopher is a leading member of the cupola project. This project aims to restore the cupola and repair the damage done to the fabric of the church due to the poor quality materials used when the cupola was built.

The Fashion Museum in Blandford Forum

Before entering the Fashion Museum, I stopped to admire the building that houses it. A short distance from the Market Place, Lime Tree House was also built by John and William Bastard. It is a typical, well-proportioned Georgian house. Although there have been later additions it has kept many of its original features including a fine oak staircase. The house was bought by the late Mrs Betty Penny to house her private collection of historic costumes and opened as a museum in 1996. Prior to finding a permanent home for her collection Mrs Penny had used it to raise money for charity all over the country as a catwalk presentation called A Cavalcade of Costume. 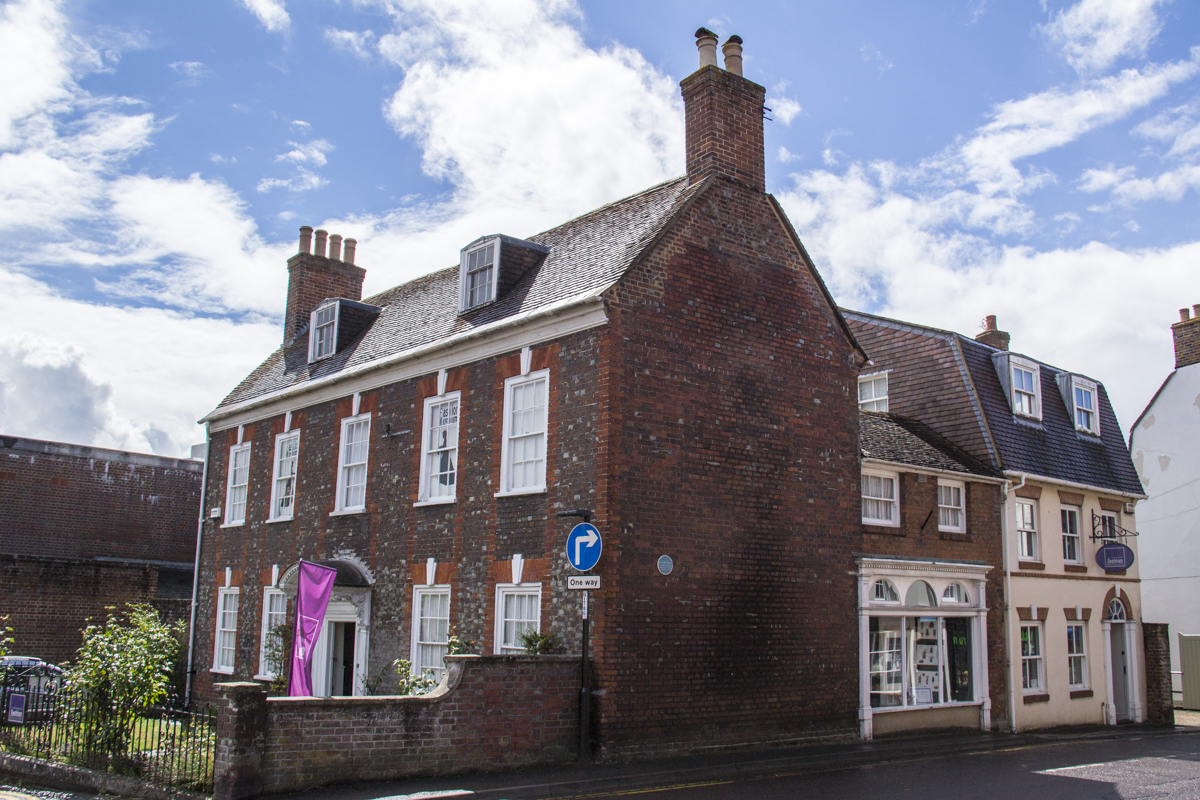 Mrs Penny’s costumes formed the nucleus of the present collection that has almost trebled in size since the museum opened and it is still growing. The exhibits are presented in the original rooms of the house either as themes or historical periods. Information boards link fashion to social history and a nice touch are the biographies of fashionable ladies of the time. Two rooms are used for temporary exhibitions and there is also a Resources Room for students, a Lecture Room and a small café. I was delighted to see a dress by Bruce Oldfield on loan from his Archive Collection. The museum is staffed by volunteers who are happy to help visitors find their way around and learn more about the museum itself. 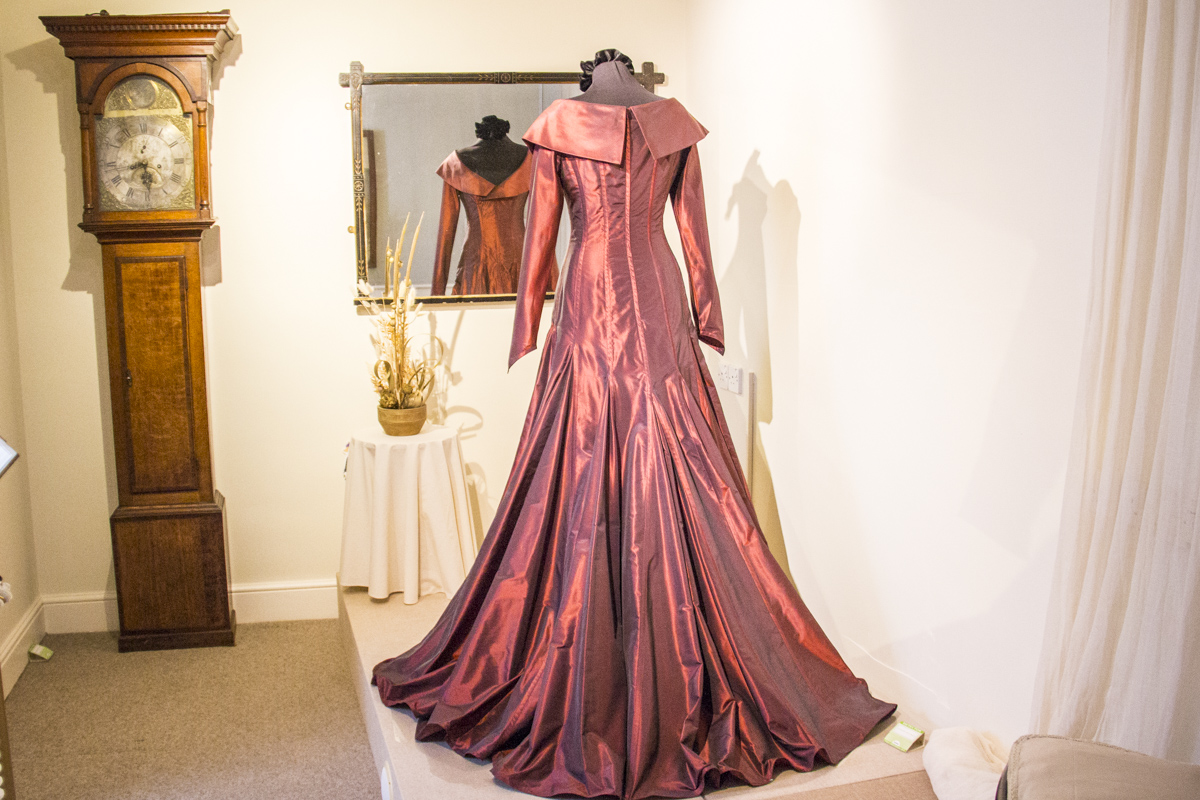 Blandford Town Museum in Bere’s Yard, just off Market Place occupies a part of a large house that the Bastard brothers built for their own use. As well as featuring information about the Great Fire and the subsequent re-building of Blandford Forum there is also a model railway replicating the town when it had a railway line running through it. The Dorset Central Railway opened a line to Blandford in 1860. An amalgamation between this company and the Somerset Central Railway forming the Somerset & Dorset Central Railway resulted in the relocation of the station to a site north of the river three years later. It was one of the largest stations on the line. The entire Bath to Bournemouth line was closed in 1966 and the station was demolished. 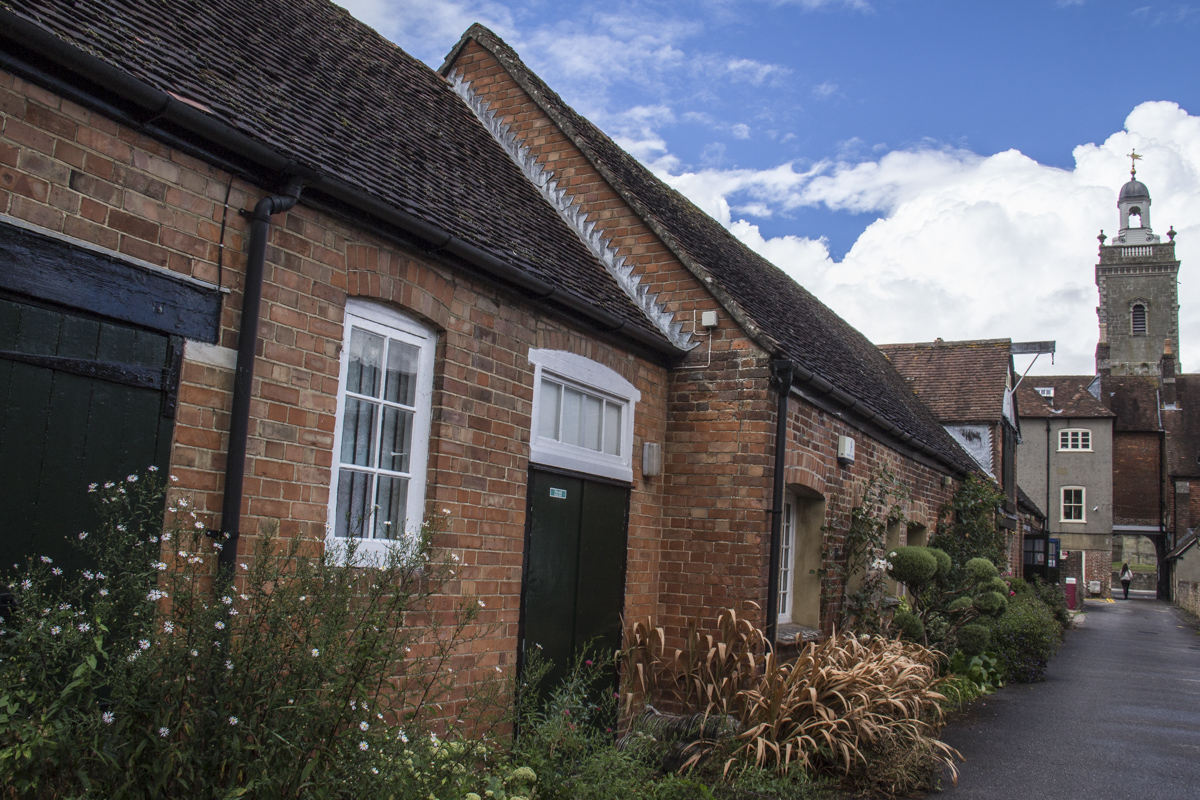 Beyond the Town Museum I found the Victorian Garden a community project that started in 2008 when a team of volunteers started clearing the overgrown patch where the gardens had once flourished. It was all done by hand as their aim was to use Victorian gardening methods. Based on the layout of a formal Victorian kitchen garden it focuses on growing heritage varieties of vegetables. This garden is open to the public as part of the Hidden Gardens programme. Even when it is not open it can still be appreciated through the gate. 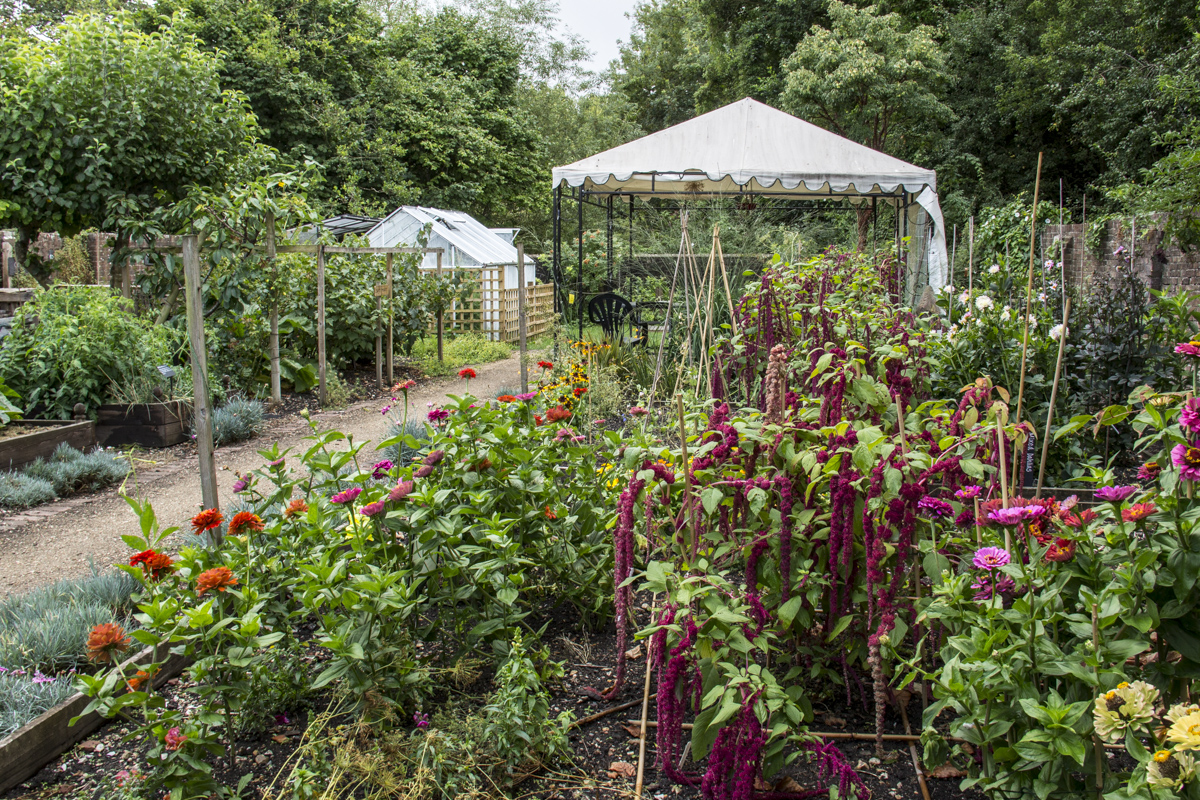 In complete contrast to the feast of Georgian architecture in the town is the Old House one of the few houses that was not destroyed in the Great Fire. This Grade 1 Listed Building, built around the middle of the seventeenth century, was the home of Doctor Sagittary. This native of the Palatinate area of Germany had English degrees in medicine and practised as a doctor in Blandford. The house displays some German characteristics and it is still a private home. 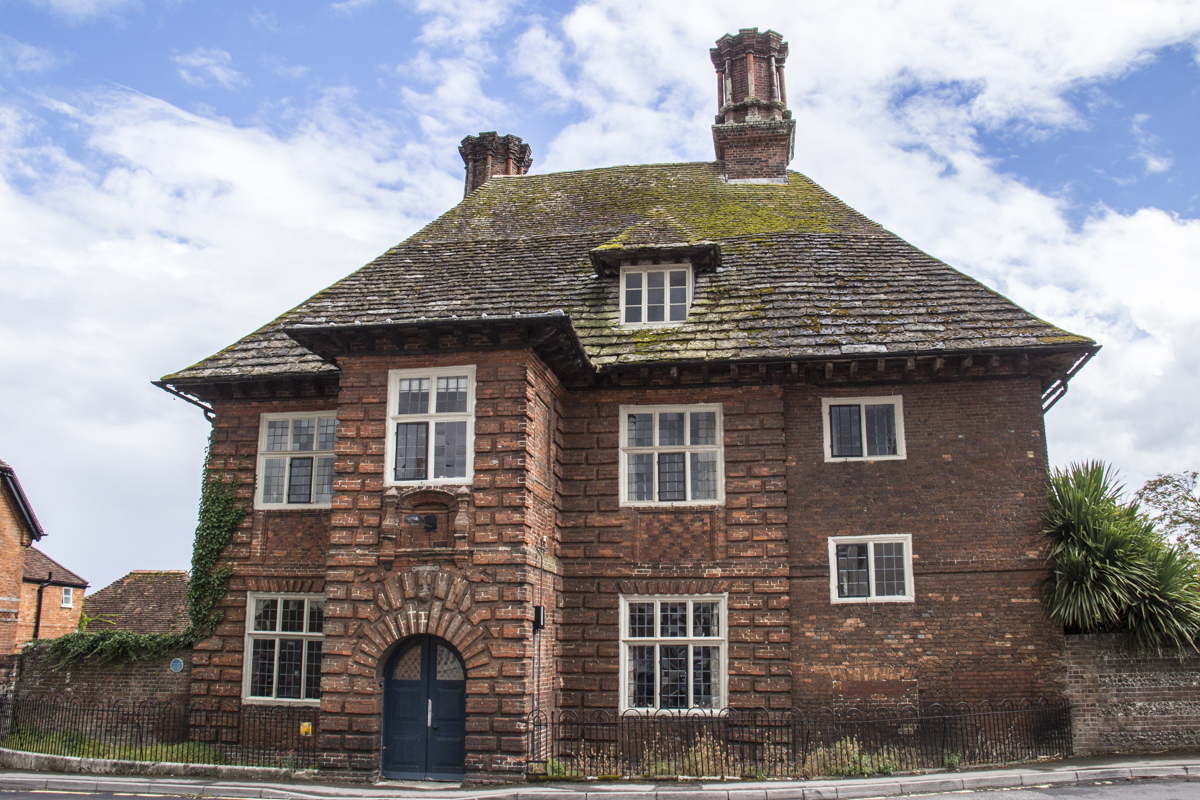 Water Meadows of the River Stour

On my way to the Water Meadows I took a short cut through the shop-lined Barnack Walk where I stopped for a coffee break at the Scruples Coffee Shop. Specialising in reasonably-priced home-made dishes it is very popular with the locals. After a huge cup of frothy cappuccino, I was on my way again and crossed the blue Mortain suspension bridge over the River Stour. This lovely recreational area is criss-crossed by several paths through meadows and beside the river and connecting streams. I enjoyed exploring an area where otters are known to make their home. I was not lucky enough to see any otters but I did find the ruins of one of an old arched railway bridge and a short section of the North Dorset Trailway. The Trailway is mainly made up of sections from the old Somerset and Dorset Railway. It provides an off-road trail for walkers, cyclists and riders stretching from Sturminster Newton to Spetisbury.

Hall and Woodhouse Brewery was founded in 1777 by Charles Hall, a Dorset farmer, in the Dorset village of Ansty. Originally set up to provide beer for General Clinton’s troops stationed on the south coast awaiting embarkation for America. Sixty years later his son Robert and his nephew Edward Woodhouse formed a partnership – Hall and Woodhouse. Today this independent family brewery continues to develop new beers to sell in the two hundred pubs they own. Their award-winning range of Badger bottled beers are also on sale in leading supermarkets and off-licences. The brewery organises daily tours and private tours for groups of more than ten. Visitors to the brewery can also enjoy a drink in the Brewery Tap bar which also serves breakfast and lunch. 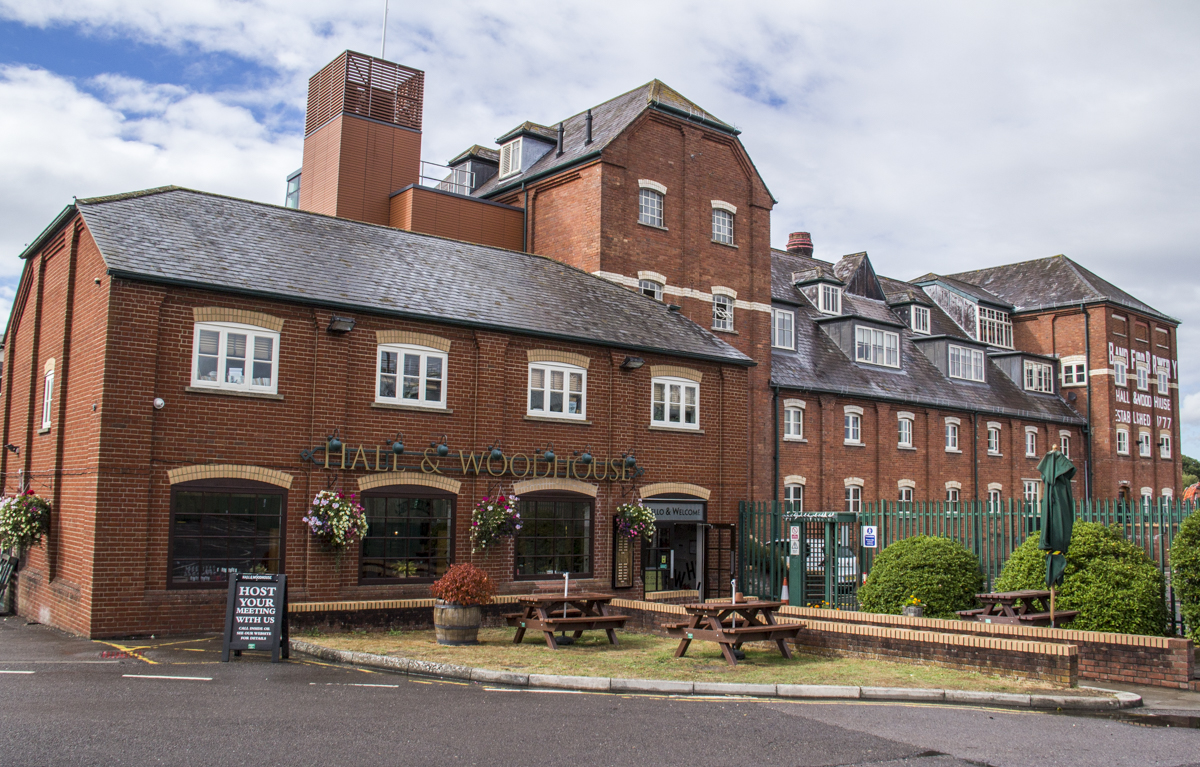 It had been a memorable day – the Georgian architecture of Blandford Forum had exceeded my expectations.