Edinburgh, the capital of Scotland, has many interesting monuments to the famous and infamous who have been associated with the city. The most striking is the Scott Monument, the tallest monument to a literary giant and dedicated to Sir Walter Scott. The cutest is the brass statue of Bobby Greyfriars the dog who mourned his master for fourteen years. And the most amusing a massive statue of Queen Victoria that the subject did not find at all funny. I started my visit at the Scott Monument. 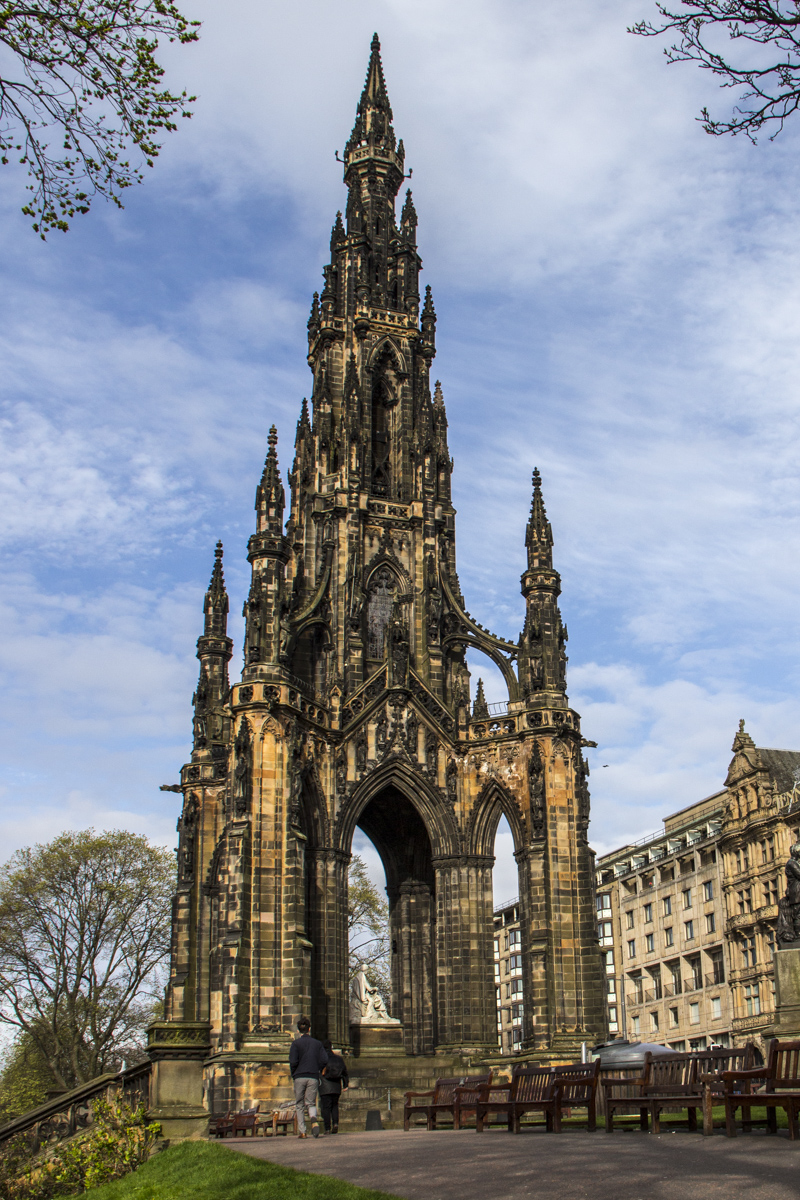 Sir Walter Scott, born in Edinburgh in 1771 is generally considered to be both the inventor and the greatest writer of historical novels. He was a born storyteller weaving tales of memorable characters in exciting historical settings. Following the immediate success of his first novel, Waverley, he wrote a series of novels that came to be known as the Waverley novels. Following his death in 1832 the city decided that it should build a monument to this great writer. An architectural competition was held and George Meikle Kemp emerged as the winner. The unique Scott Monument is the largest monument to a writer anywhere in the world. I enjoyed the amazing experience of climbing to the top of its pinnacle and visited the little museum on the first floor on my way down. This museum includes artefacts that once belonged to the writer. The Writers’ Museum celebrates the life of Scott as well as two other famous Scottish writers Robert Burns and Robert Louis Stevenson. 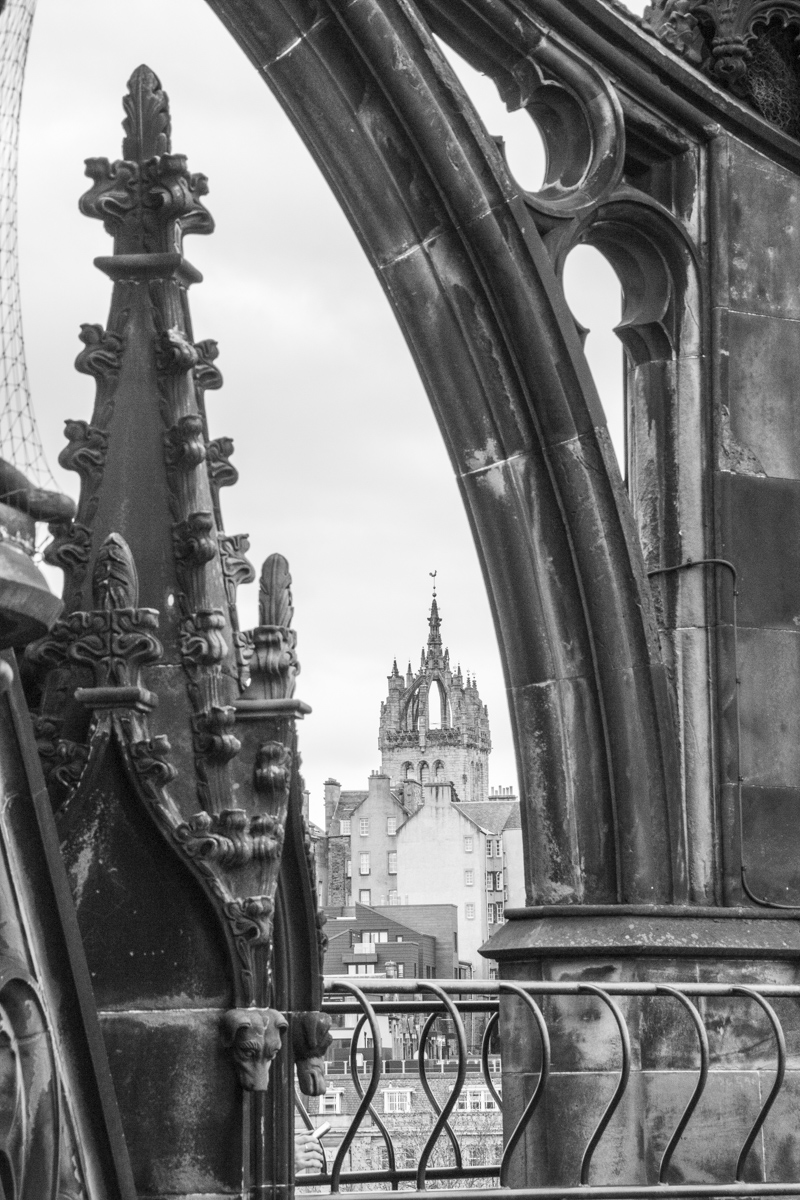 George IV was the first Hanoverian monarch to visit Edinburgh and his triumphant if somewhat comical arrival, clad in a tartan and pink tights, was conceived by Sir Walter Scott. The bronze statue of the monarch commemorating this visit was sculpted by Sir Francis Legatt Chantrey and unveiled in 1831. It is a very flattering portrayal of a monarch is was reputed to be nearly as wide as he was tall. According to legend many beautiful ladies lined the streets to see the king who insisted on kissing each one of them. Many were moved to tears by the odour emanating from his wooden false teeth. 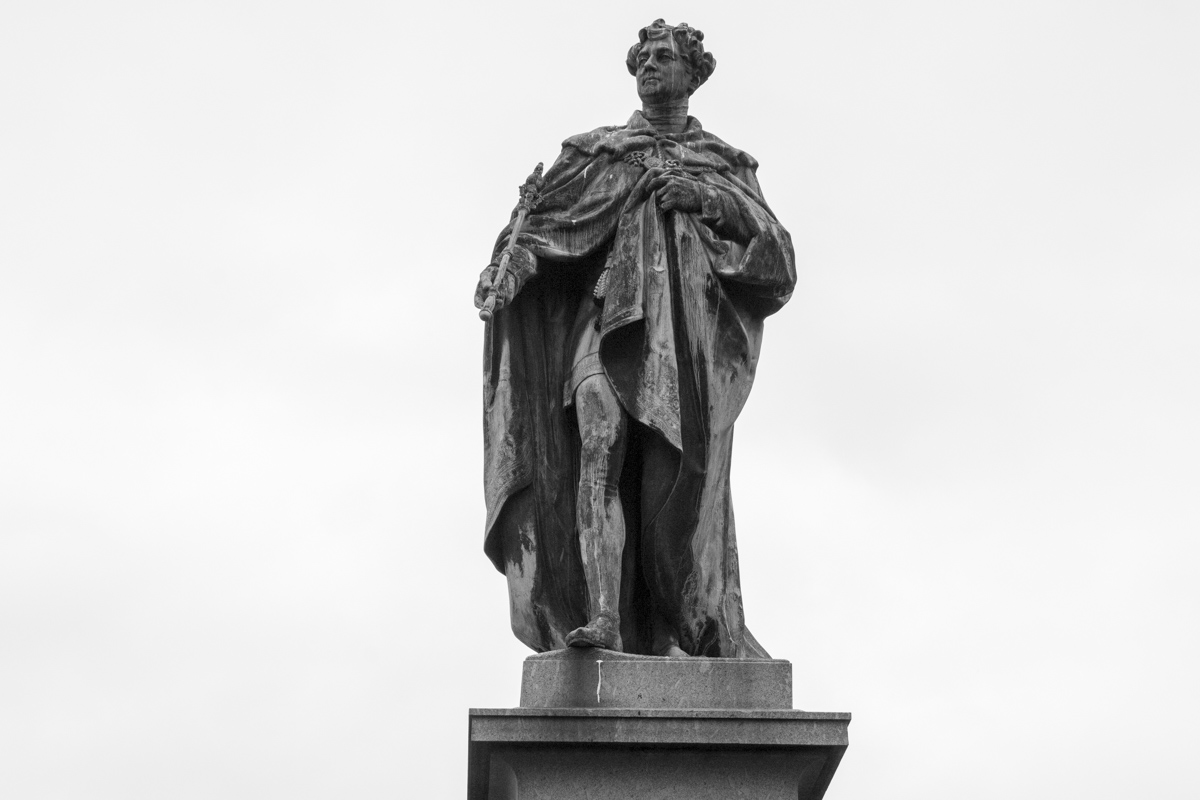 The Royal Institution on the south side of Princes Street was completed in 1836 a year before Queen Victoria came to the throne. In 1844, two years after Victoria’s first visit to Edinburgh an enormous statue of Queen Victoria was placed on the roof of this building. In 1911 the building became the home of the Royal Scottish Academy and Victoria is still on the roof keeping an eye on the crowds below. 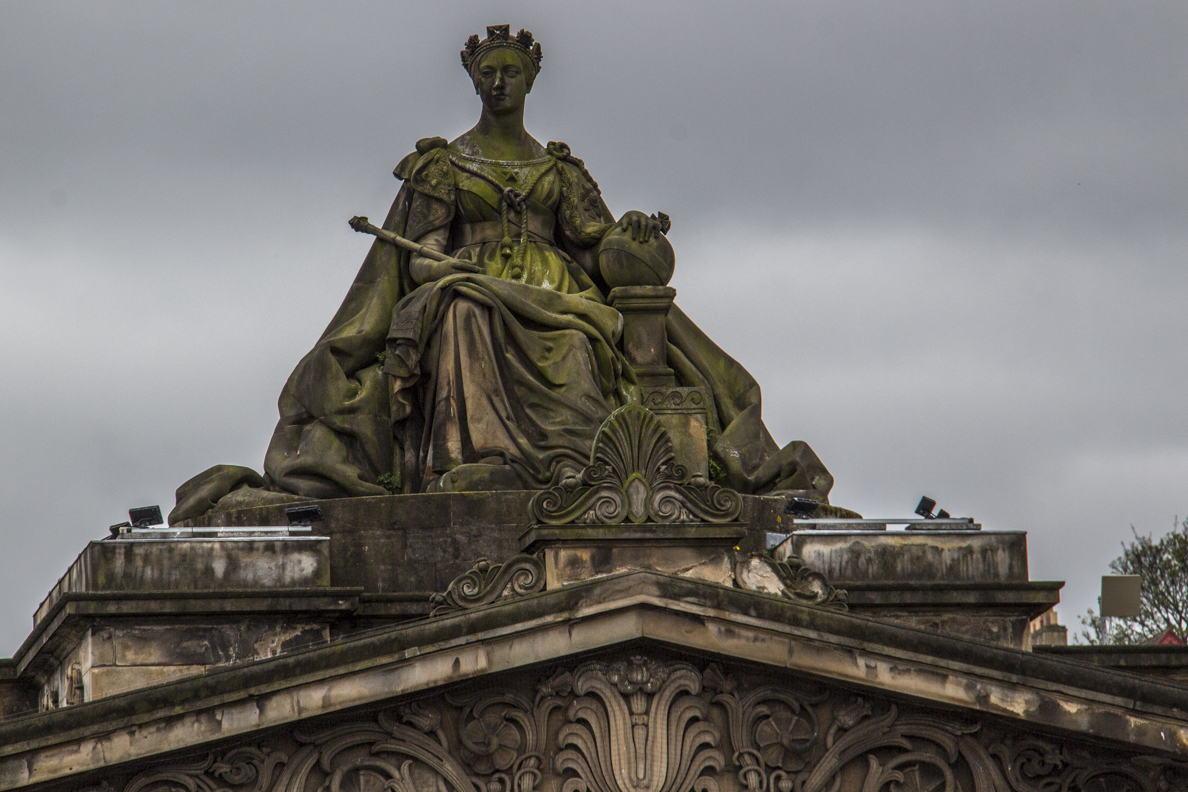 Queen Victoria was a regular visitor to Scotland and in particular Balmoral Castle which she and Prince Albert purchased as their Scottish royal home. Their visits to Edinburgh had an impact on the royal palace there, the Palace of Holyroodhouse. Prior to their visit in 1850 improvements and renovations were done in the interior of the Palace; a new garden and stable buildings were added; a new Renaissance style fountain was installed in the courtyard. 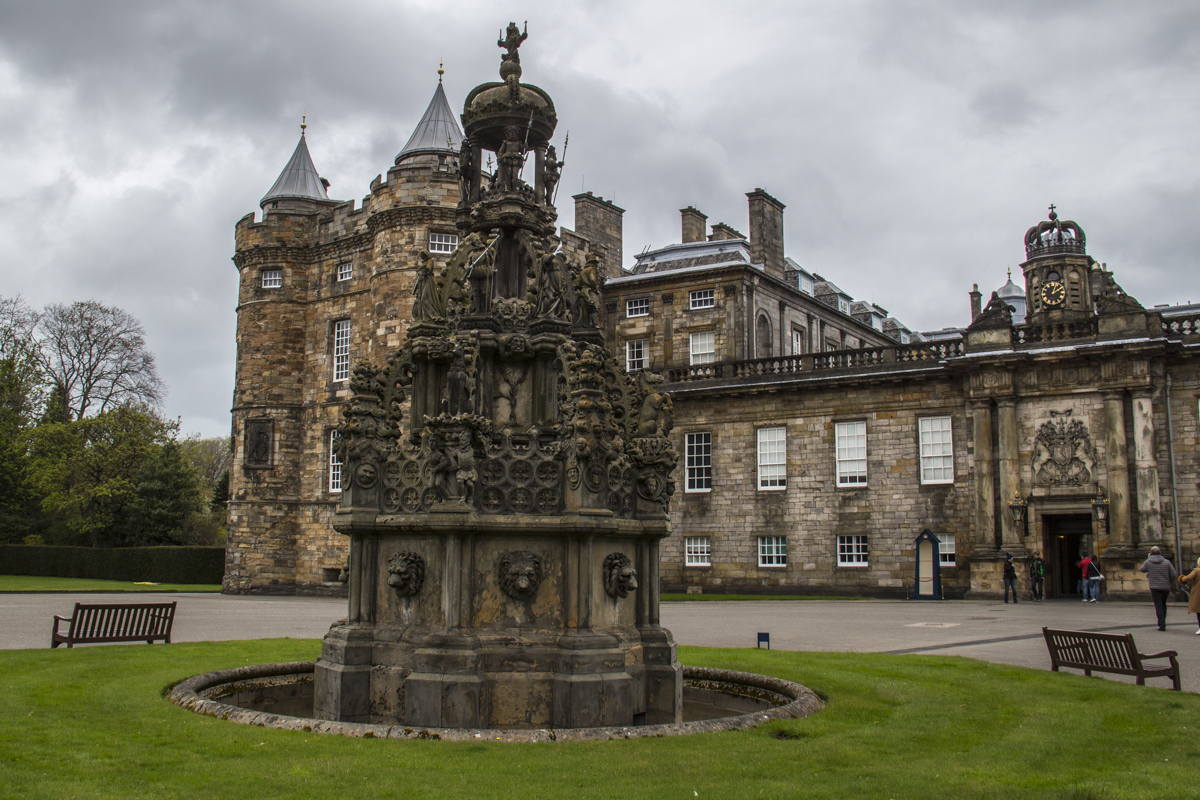 Every year Queen Elizabeth II spends a week at the Palace of Holyroodhouse, a time referred to in Scotland as Royal Week but elsewhere it is called Holyrood week. This visit celebrates Scottish culture, community and achievement. A permanent reminder of Queen Eizabeth’s association with Edinburgh, decommissioned and moored at the Ocean Terminal, Leith in Edinburgh is the Royal Yacht Britannia. Open to visitors, it is a fascinating insight into the life of the royals aboard their yacht. 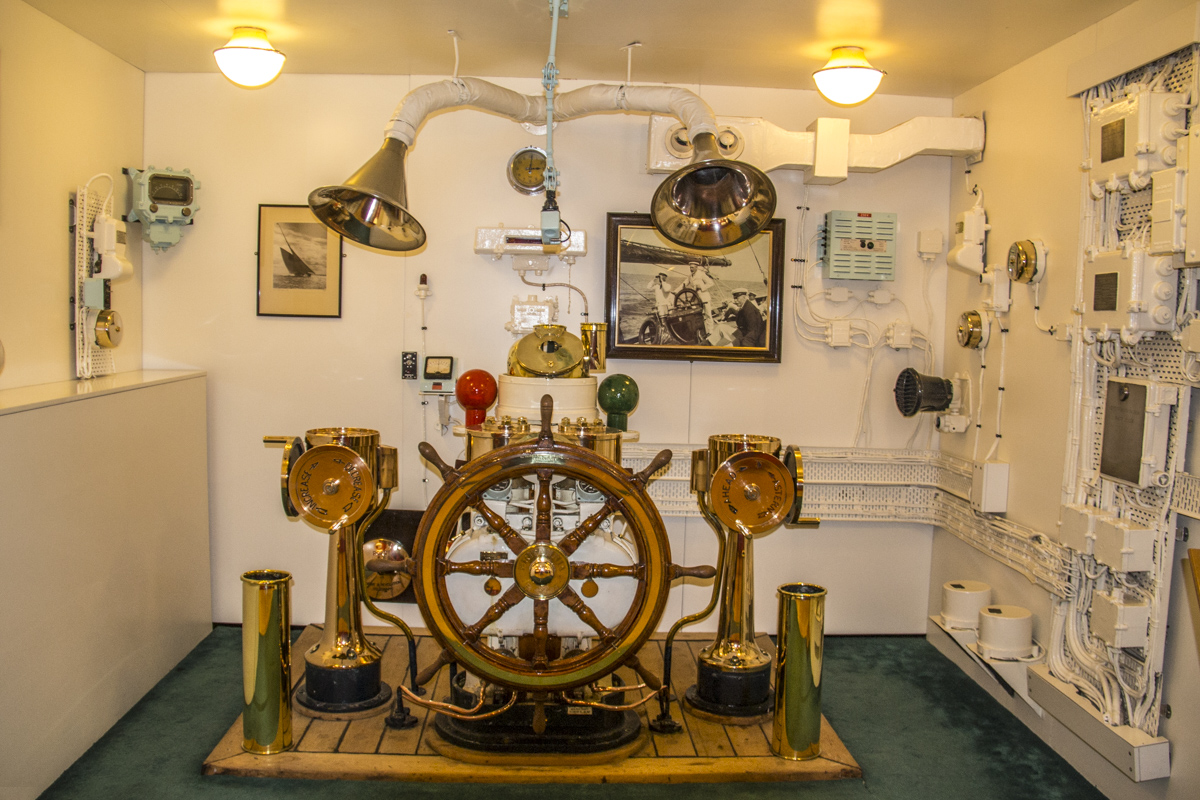 Although the Melville Monument is one of the most prominent in the city it is not one of the most popular. This may be because the person it commemorates, Henry Dundas, Viscount Melville also referred to as King Harry the Ninth, the Great Tyrant and the Uncrowned King of Scotland was not a popular personality. Although his career as a prominent politician ended abruptly when he was accused of misusing public funds even though he was never found guilty. It seems strange that anyone would build a monument to such a disreputable character. As recorded on a plaque on the statue it was paid for ‘by the voluntary contributions of the officers, petty officers, seamen and marines’. These contributions came from the many people in Scotland who benefited from his skill at taking advantage of the corrupt system of Georgian politics. This permanent reminder of his goodwill, inspired by the Trajan’s Column in Rome and the work of the architect William Burn, now dominates Saint Andrew Square. 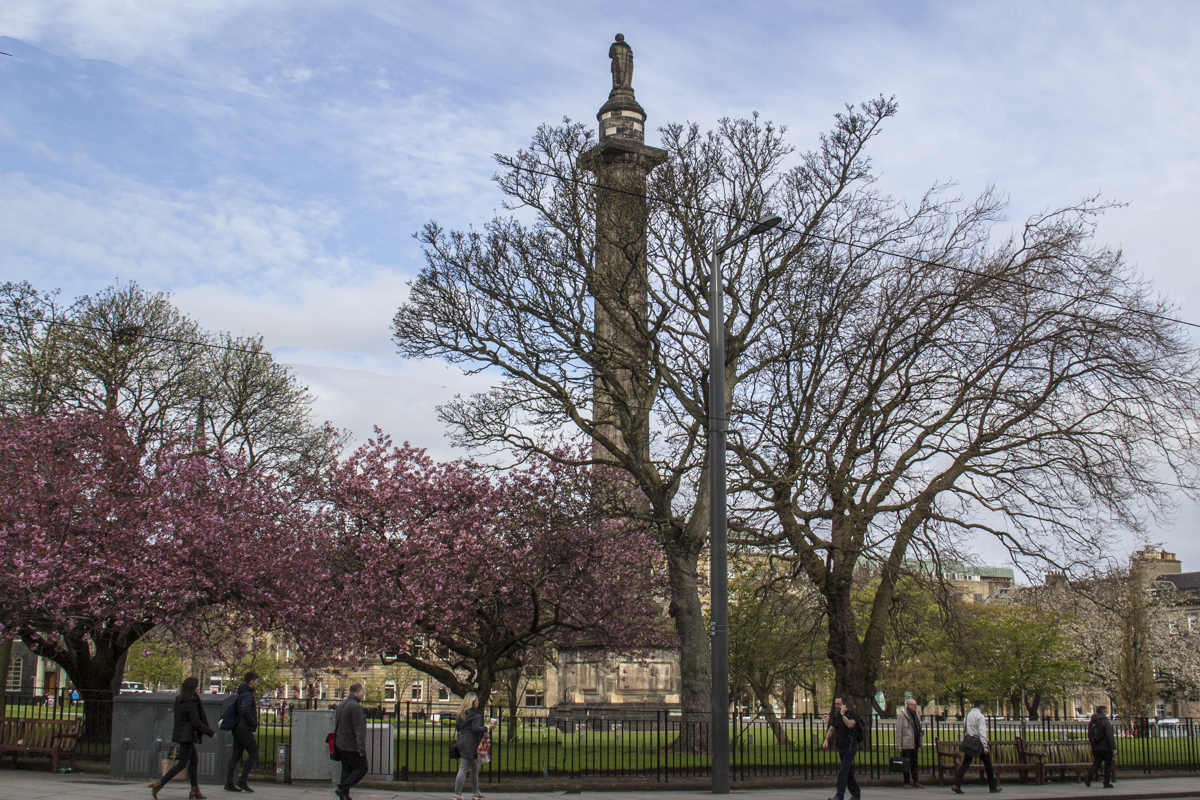 Arthurs Seat, an ancient volcano, is the highest point in Holyrood Park, a large Royal Park adjacent to the Palace of Holyroodhouse. At the top of this hill is the site of large, well preserved fort and good views of the city below. However, the name, Arthur’s seat, is probably the most interesting aspect of this hill. Eminent historians agree that the name is very likely to be a reference to the legendary King Arthur. Whether or not King Arthur is a mythical figure there are some real historical links that suggest this is not entirely true and this is one of them. 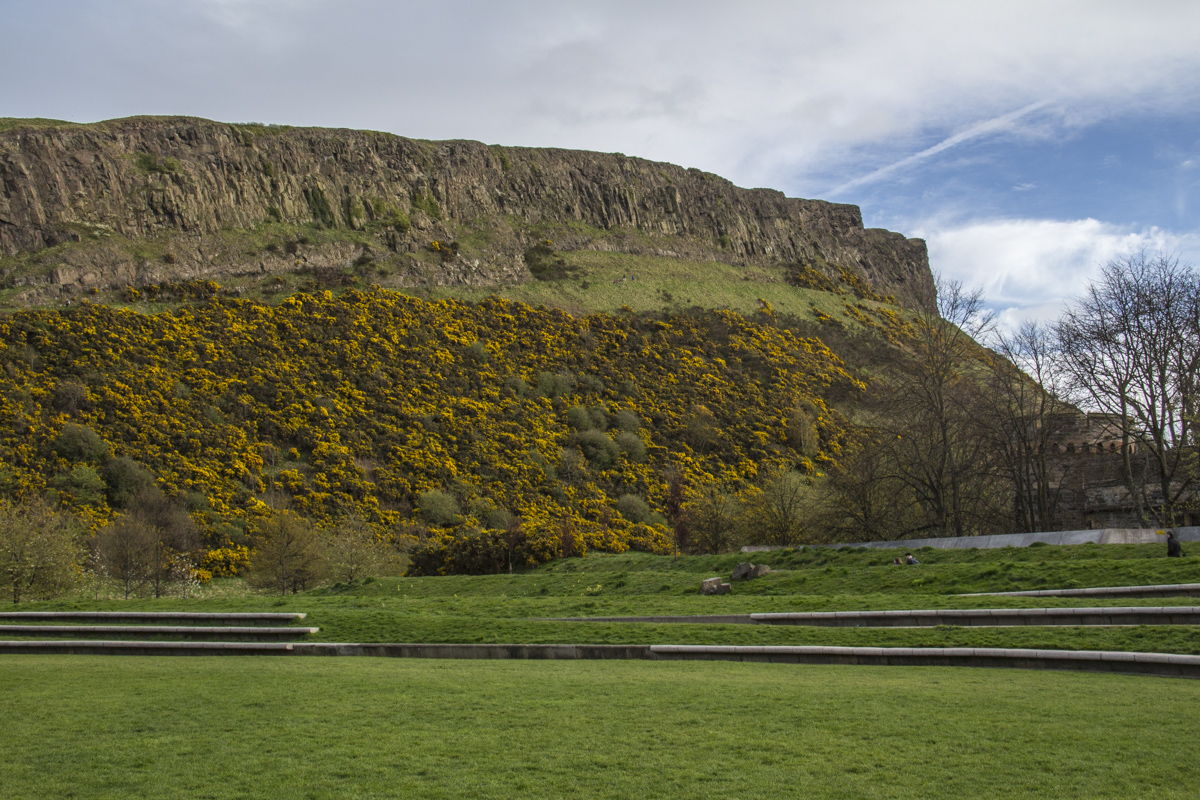 Grassmarket was originally a horse and cattle market from the fourteenth century until the early nineteenth century. It was also traditional to hold public executions here. However, not every hanging was successful. In 1721 Margaret Dickson, later to become known as half-hangit Maggie was separated from her husband when she became pregnant. She managed to hide her pregnancy and when the child was born it was very weak and died a few days later. Maggie had nowhere to bury the child so she put the body in the River Tweed. When it was washed ashore suspicion fell on Maggie and she was taken to Edinburgh where she was tried and condemned to death. Her family put her body in a flimsy wooden coffin which they placed on a cart to take her home to Musselborough. On the way there she woke up. Scots law did not permit her punishment to be repeated and deemed it an Act of God and she was granted a pardon. It was later that the words “until dead” were added. Re-united with her husband it is said she bore several healthy children and lived happily ever after although it is said that thereafter her head flopped to one side. Maggie’s story is featured in the Edinburgh Dungeons 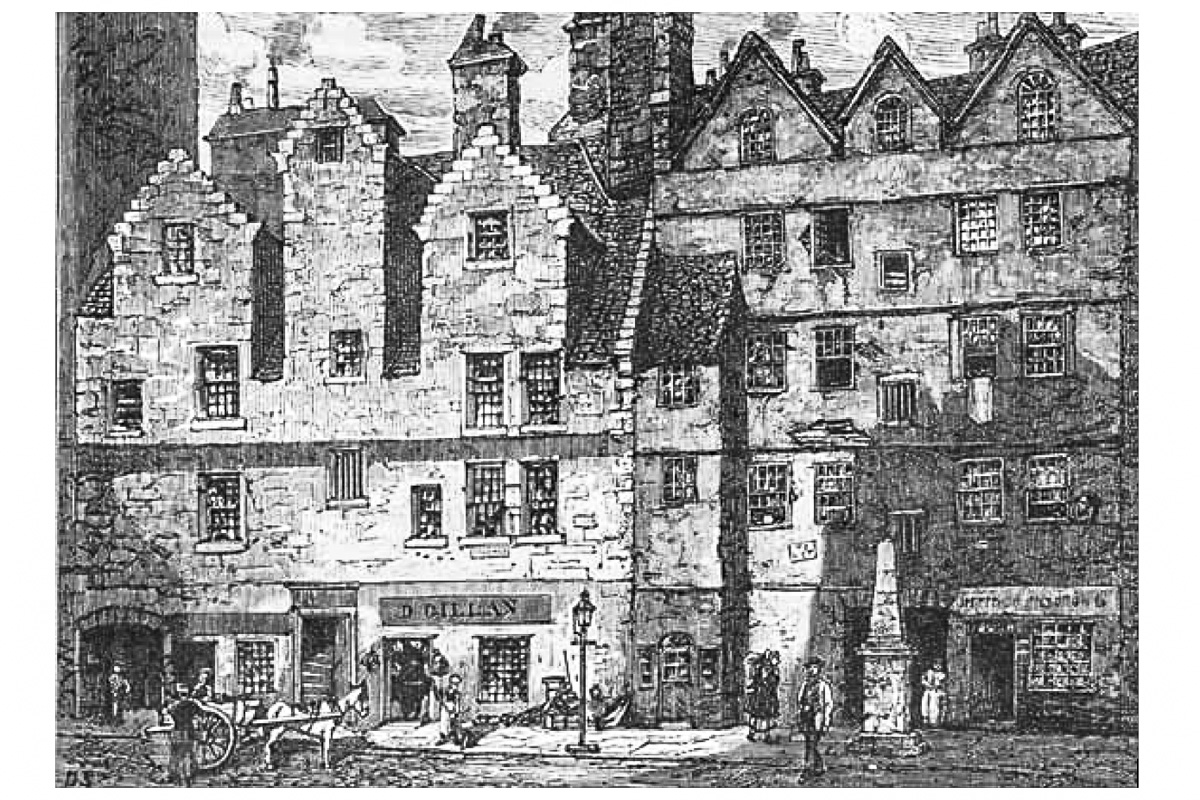 Dr Robert Knoxt (1791–1862) inspired a large numbers of murders but was never found guilty of any criminal offence. Before the Anatomy Act of 1832 the supply of cadavers was limited to those sentenced to death and dissection by the courts. But, as research was becoming more important the number of executions was decreasing. In his zeal to acquire corpses for his own research Dr Knox was offering such good money for cadavers them that people were robbing graves to acquire them. One William Hare heard about this from one of Knox’s students and after a fellow lodger died owing him some money he sold the body to Knox. Hare and his accomplice, William Burke, saw an opportunity to make some money and began to create corpses by murdering vagrants. Their sudden flamboyant lifestyle raised suspicions and they were tried for three of sixteen murders. Hare avoided the gallows by giving evidence against Burke who was sentenced to hanging and dissection. As for the doctor he was shunned by the medical profession and eventually moved to London. His story is told in the Surgeons’ Hall Museums 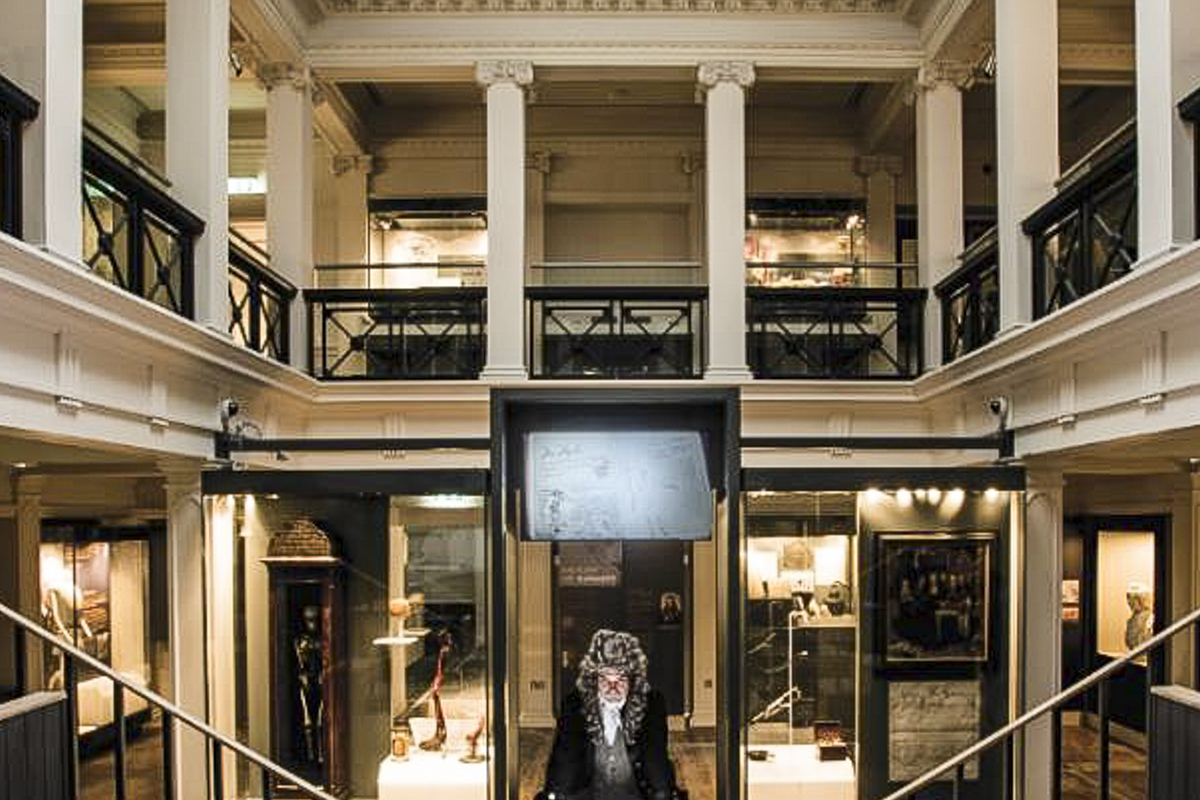 Greyfriars Bobby was as small Skye terrier owned by John Gray who joined the Edinburgh Police Force in the mid-nineteenth century and worked as a night watchman. The dog kept him company every night. Sadly, eight years later John Gray died of tuberculosis and was buried in Greyfriars Kirkyard. Bobby kept a vigil by his master’s grave for the rest of his life – although he did take time out every day for a midday meal provided by the owner of the Coffee House which Bobby and his master had frequented in happier times. After a bye-law was passed in 1867 requiring all dogs in the city to be licensed or they would be destroyed The Lord Provost of Edinburgh paid for Bobby’s licence and gave him a collar with a brass inscription “Greyfriars Bobby from the Lord Provost 1867 licensed”. The collar is on display at the Museum of Edinburgh and there is a statue of Bobby by Greyfriars Kirkyard. 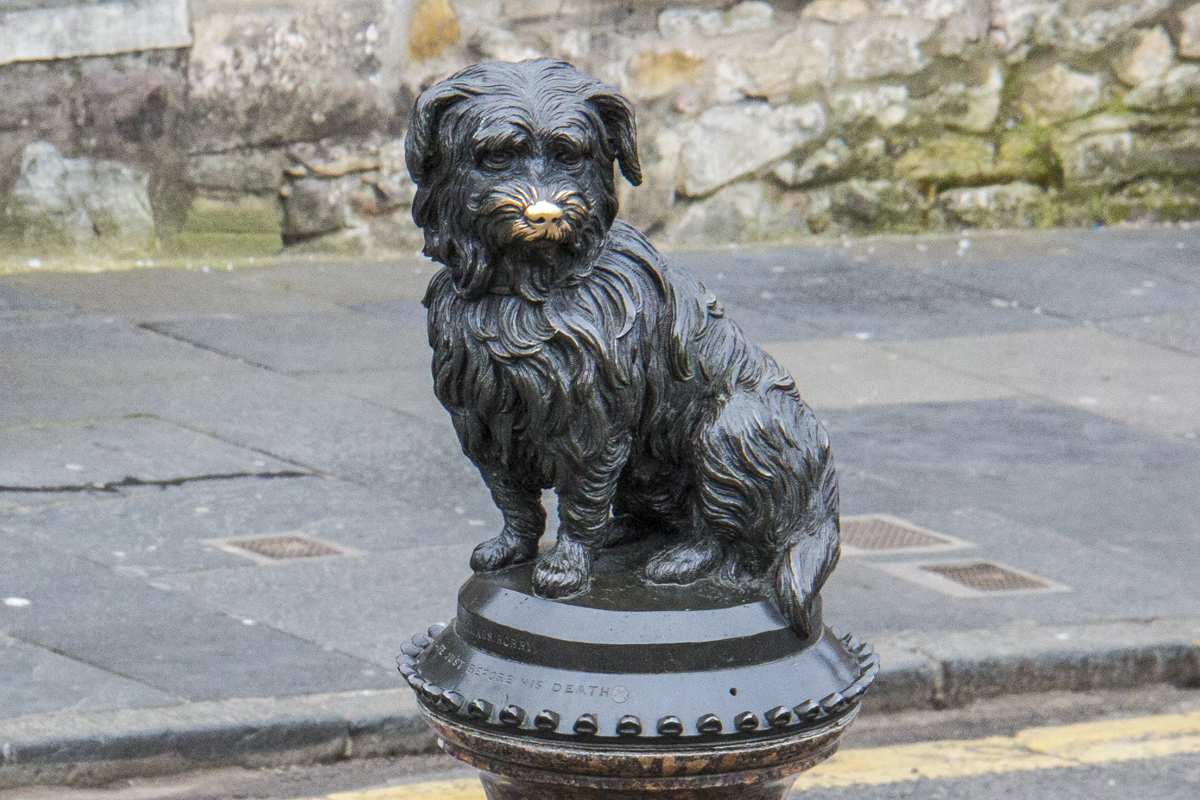 Deacon William Brodie was another victim of the gallows when his ingenious plan to make money was uncovered. Brodie was a skilled cabinet maker and a member of the Town Council. He had a respectable job during the day the sometimes involved repairing locks on the doors of other peoples’ houses. At night he led a gang of burglars entering and stealing from those houses. He needed the proceeds of these crimes to support an extravagant life-style that including gambling, two mistresses and a lot of children. He was caught when a raid went wrong and although he escaped two of his gang were caught and turned King’s Evidence on him. He was tried, found guilty and hanged from a gibbet that he had recently re-designed himself. It is said that his double life was the inspiration for the novel ‘The Strange Case of Dr. Jeckyll and Mr. Hyde’ by another famous Scottish writer, Robert Louis Stevenson. 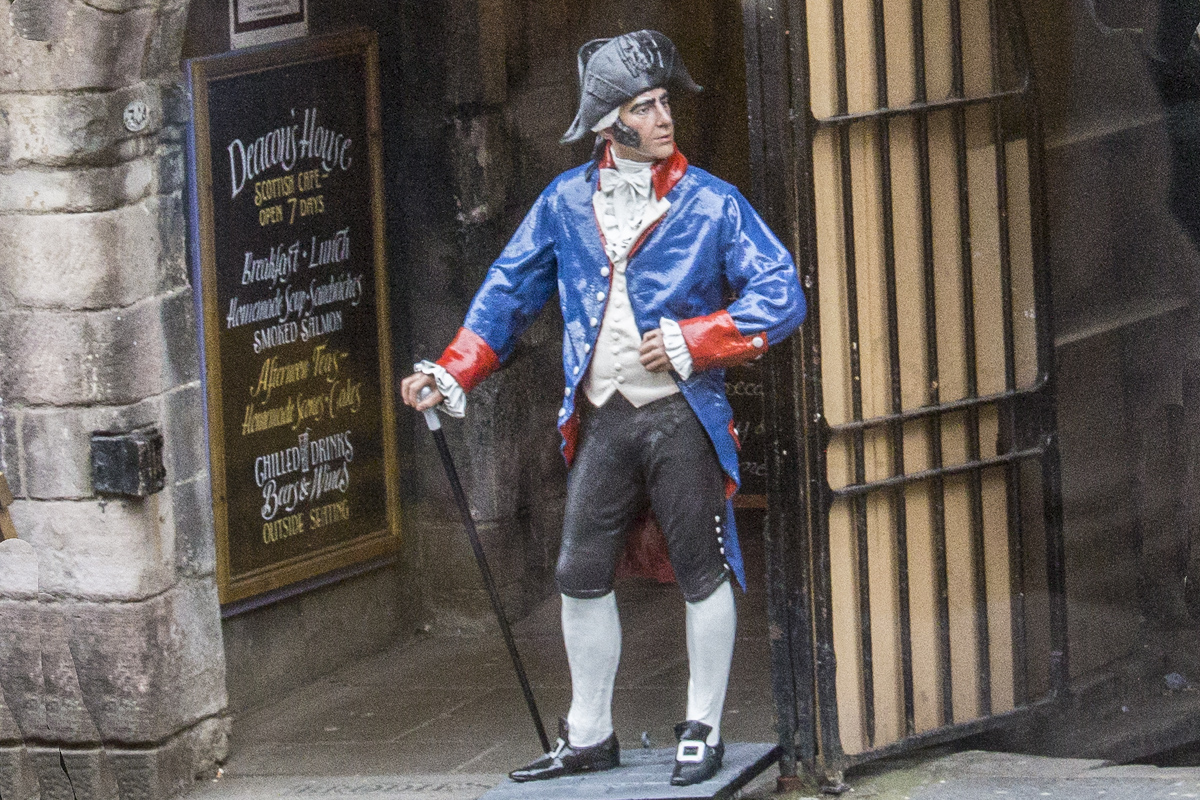 Within the walls of Edinburgh Castle the former North Barracks have been refurbished to create the Scottish National War Memorial. Decorated with sculptures, stained glass windows and other works symbolising courage, peace, justice and survival it is a fitting tribute to the fallen in both world wars and other military campaigns since 1945. After visiting the castle, I climbed to the top floor of the Camera Obscura – dedicated to fun – for the best view of the castle buildings in Edinburgh. 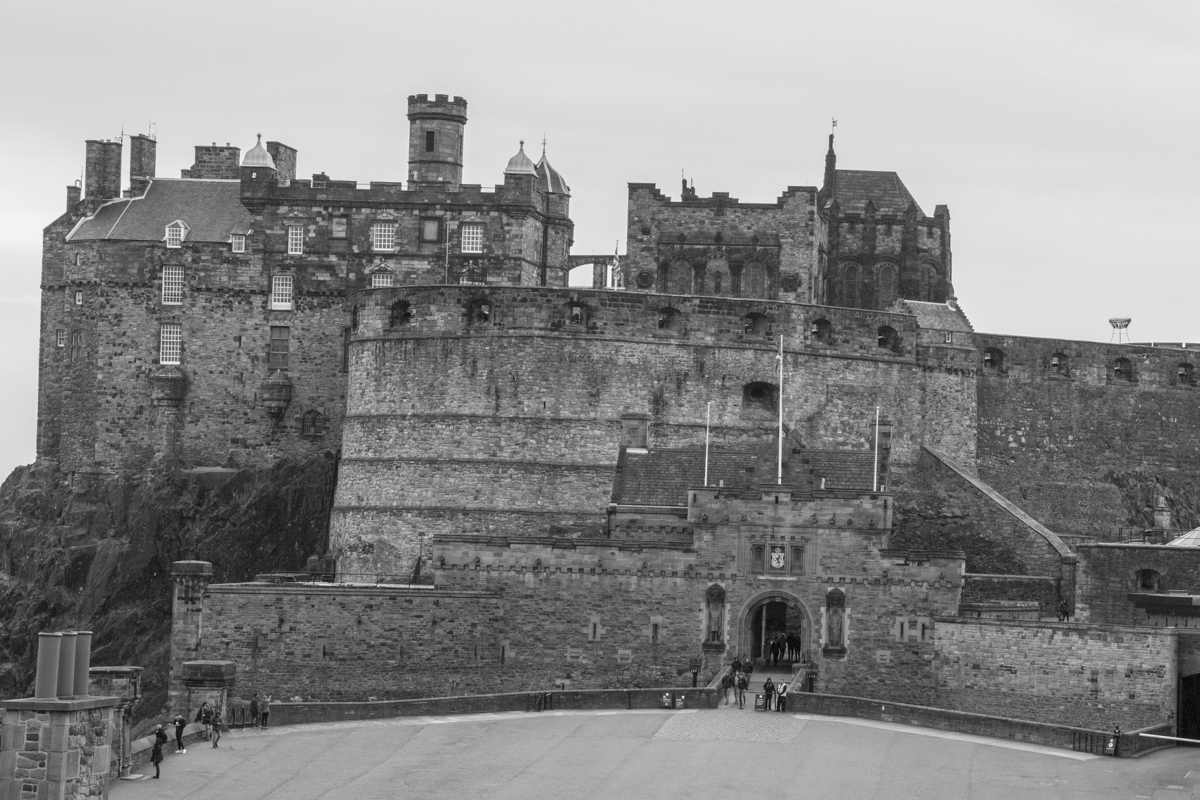