Yorkshire Sculpture Park - the only one of its kind

The Yorkshire Sculpture Park is an international centre for modern and contemporary art featuring some of the world’s finest artists. Their work is displayed in the open-air and its four galleries. This glorious park occupies the huge historic estate that once surrounded the beautiful Bretton Hall built in thePalladian style of architecture. 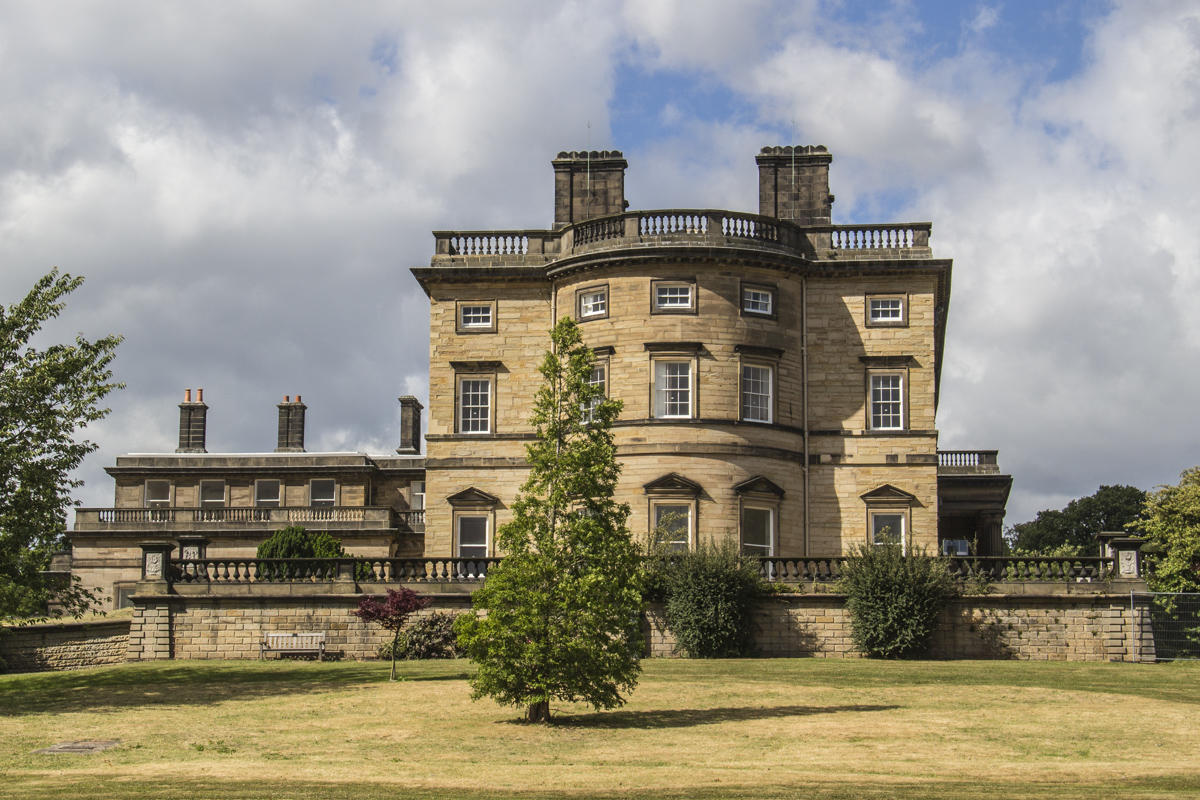 The History of Bretton Hall

Sir William Wentworth, a member of the Yorkshire gentry, built Bretton Hall in 1720. When his illegitimate grand daughter, Diana Beaumont, inherited the estate from her father at the beginning of the nineteenth century she extended the mansion and its outbuildings. But Diana was very unpopular and when the estate passed to her son, Thomas Wentworth Beaumont, he sold everything that reminded him of his mother. But he did re-invest the money in the estate which was owned by the Beaumonts until 1948 when most of it was sold to West Riding County Council. The mansion became a training college, Bretton College, and later, in 2001 it became part of the University of Leeds. The college closed down in 2007 and the buildings were sold to Wakefield Council and came under the management of the sculpture park. The mansion has remained empty since then although it is now being restored and converted into a luxury hotel. 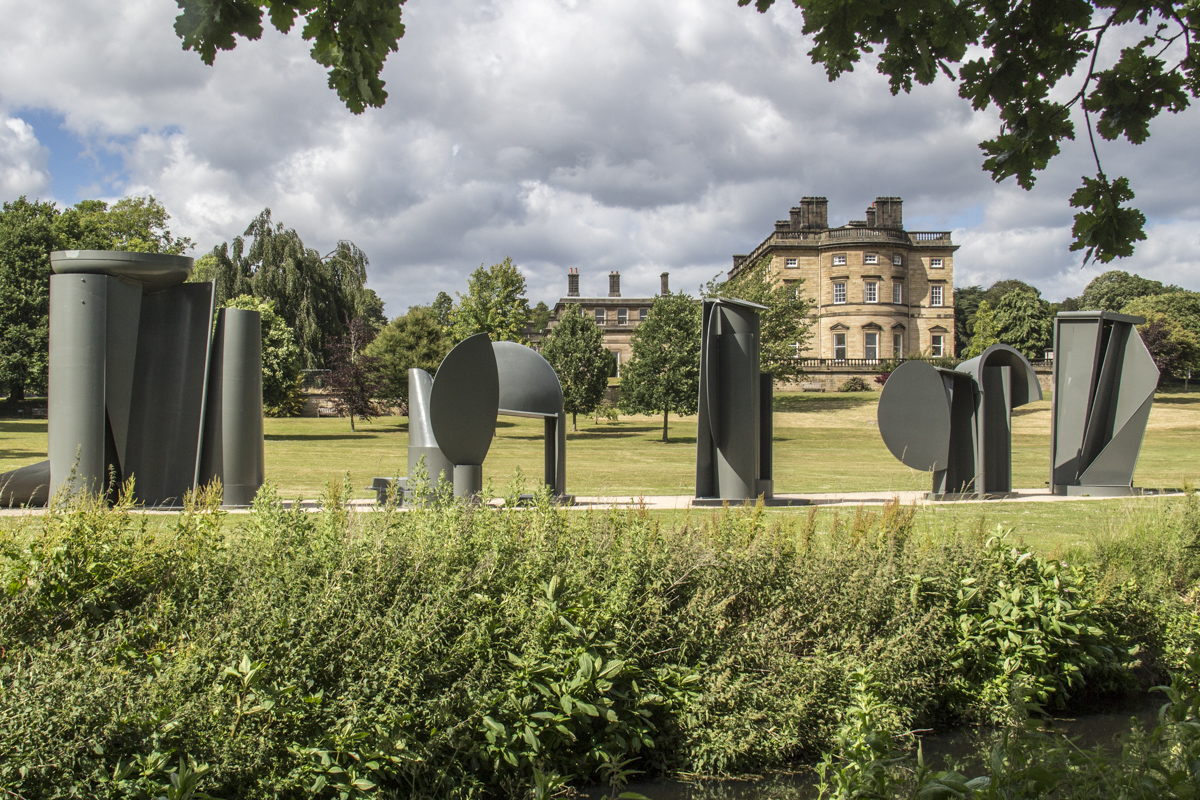 The Park and Gardens

It was Sir Thomas Wentworth, second owner of Bretton Hall, who initiated the creation of the parks and gardens amongst the pastureland that surrounds the mansion. He organised the damming of the River Dearne and had the lakes dug out. He is said to have been quite eccentric and liked to sail his yacht on his lakes and indulge in wild parties. It was in 1977 that Peter Murray, a Bretton Hall College lecturer, suggested that the park and gardens would be ideal for a sculpture park. It would open up the landscape to the public and provide artists with an open-air venue for their work. Since the Yorkshire Sculpture Park opened in 1997 other areas of the estate have been opened up and some of its quirky follies have been rescued from the tangled undergrowth and restored. These include the Stepping Stones, the Boathouse, the Shell Grotto and Lady Eglinton’s well an early bath house. 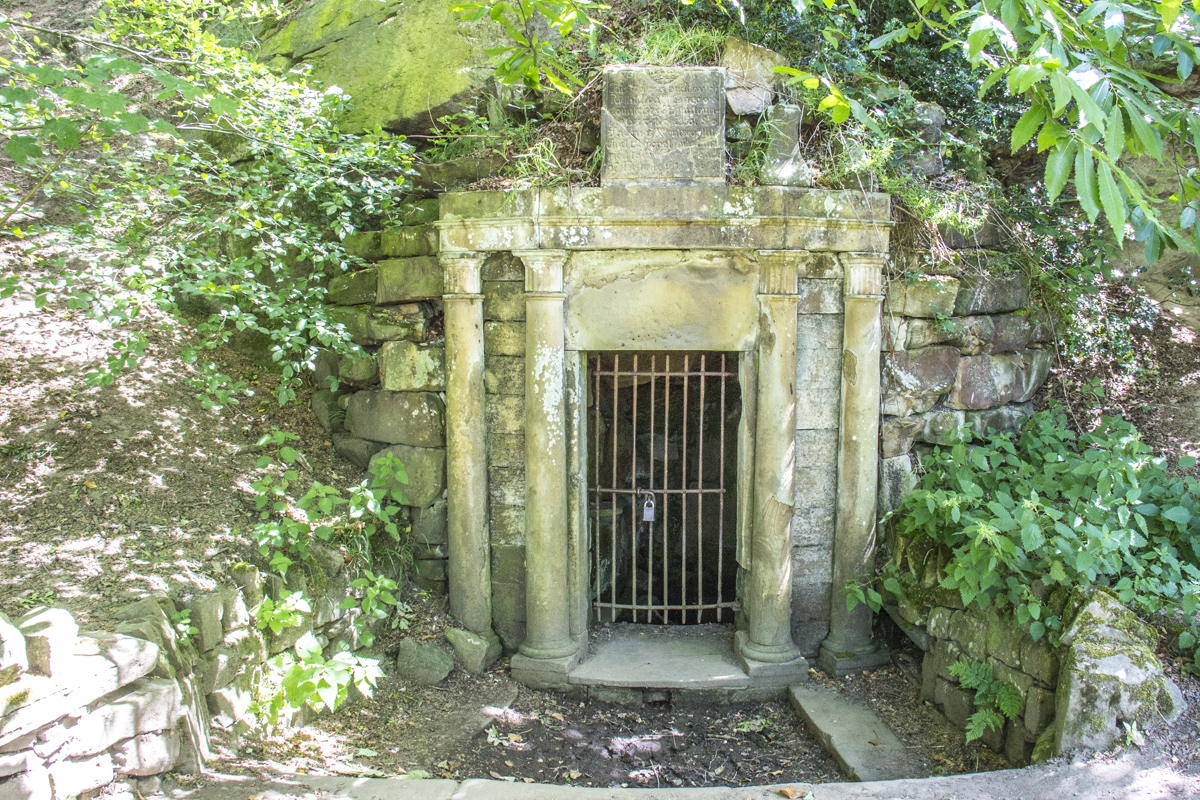 As it was a lovely day I decided to leave the Visitor Centre until last and made my way to the Chapel a short walk from the main entrance. This Georgian sandstone chapel was built in the classical style with Tuscan pilasters and a cylindrical bell tower. It was commissioned by Sir William Wentworth in 1744 as a private chapel to be used by the family and became known as St Bartholomew’s Chapel. Outside the building there is a series of tablets dedicated to members of the Wentworth family including Diane Beaumont who inherited Bretton Hall in 1792. While Diane lived here several additions were made to the estate including the Archway Lodge and the Camellia House. Extensive landscaping was also undertaken using imported trees. This chapel was used until the early 1990s when it was deconsecrated and the services were moved to the more convenient West Bretton village church. The chapel fell into disrepair and was in danger of being demolished but an extensive restoration project has transformed the chapel into a unique exhibitions space for the Sculpture Park. 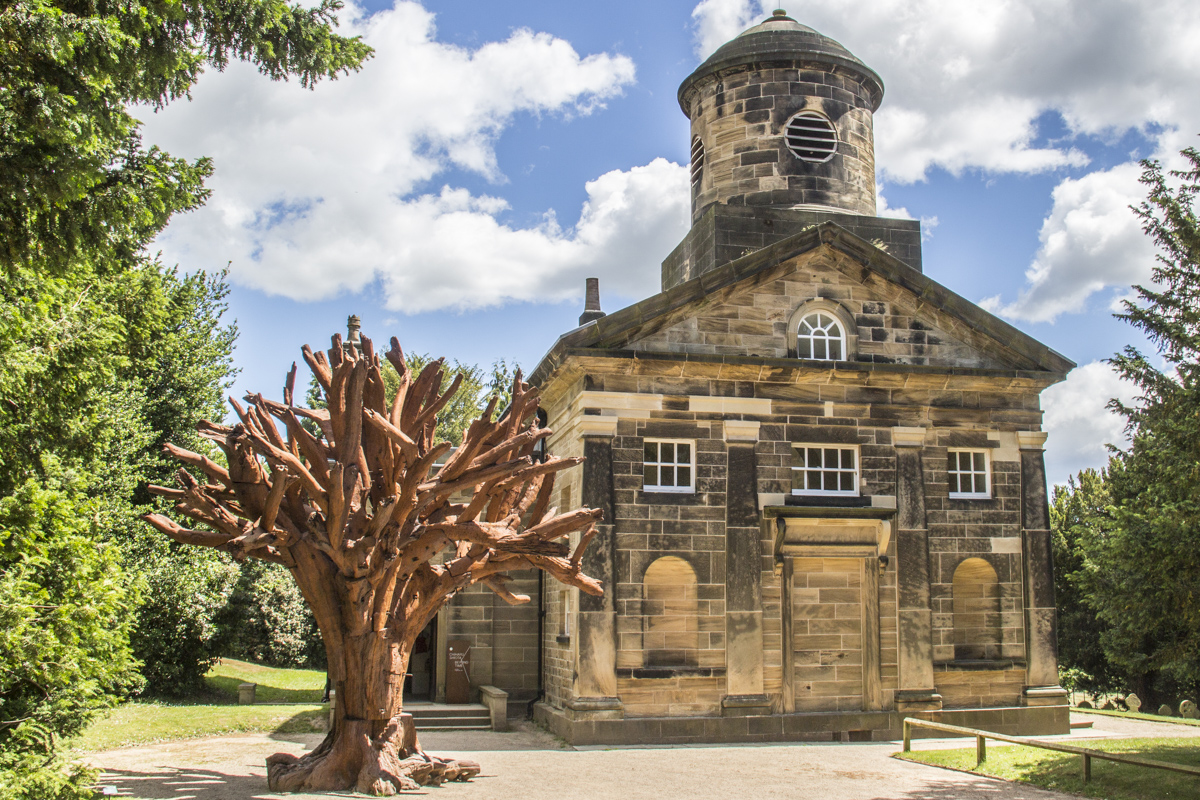 The inaugural exhibition by internationally-renowned Ai Weiwei included the Iron Tree that still stands in the courtyard of the chapel. This tree is made of ninety-seven tree elements cast in iron and interlocked using a classic Chinese technique. I met up with Ai Weiwei again later that day. His Circle of Animals/Zodiac Heads was installed close to the Camellia House to celebrate the Sculpture Park’s fortieth anniversary. It represents the sculptor’s re-interpretation of the traditional Chinese zodiac. In its present location it fulfils his desire that the work should be playful and accessible to the general public. The expressions on the faces of the animals are both amusing and endearing. 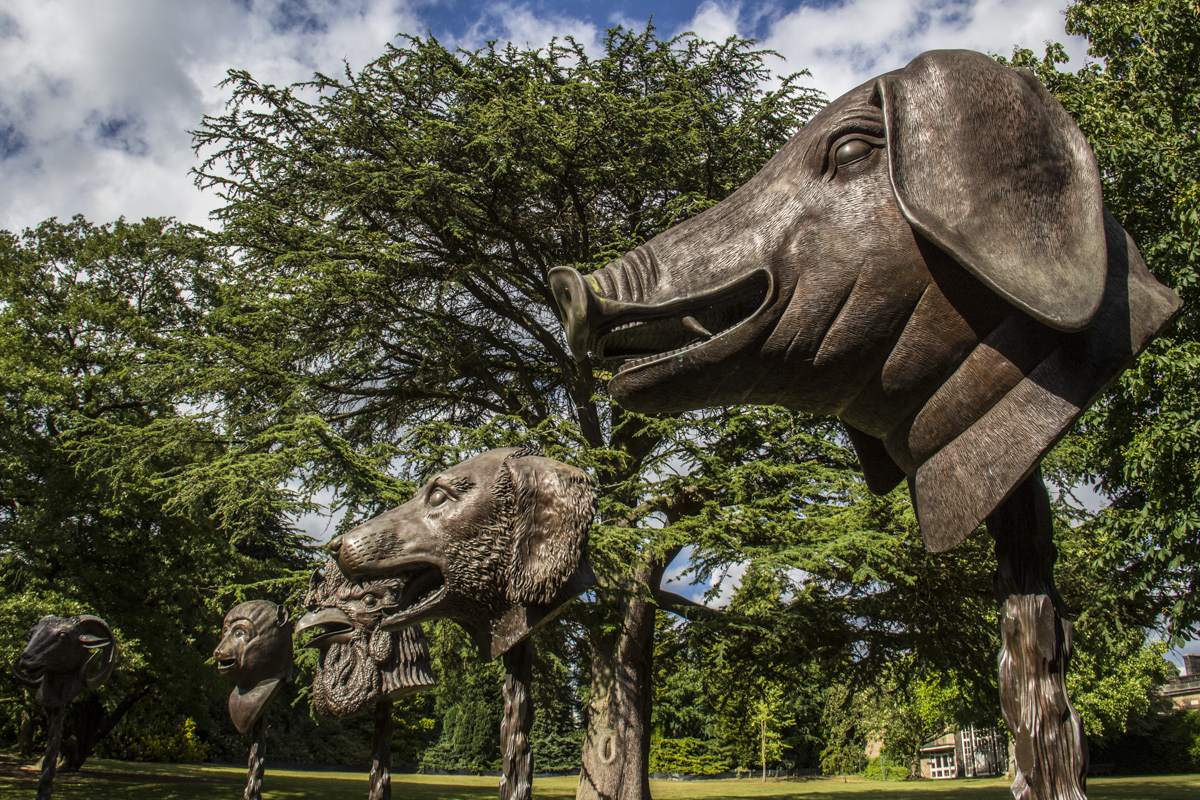 Inside the chapel was an incredible work of art Beyond Time create by Chiharu Shiota. It resembles a huge spider’s web woven around a piano by a massive spider. Thousands of sheets of music and notices of services to be held are trapped in the threads. This project is a reference to the rich history of the chapel – an allusion to the bells that were rung, the songs that were sung, and the lives that revolved around it. It was stunning. 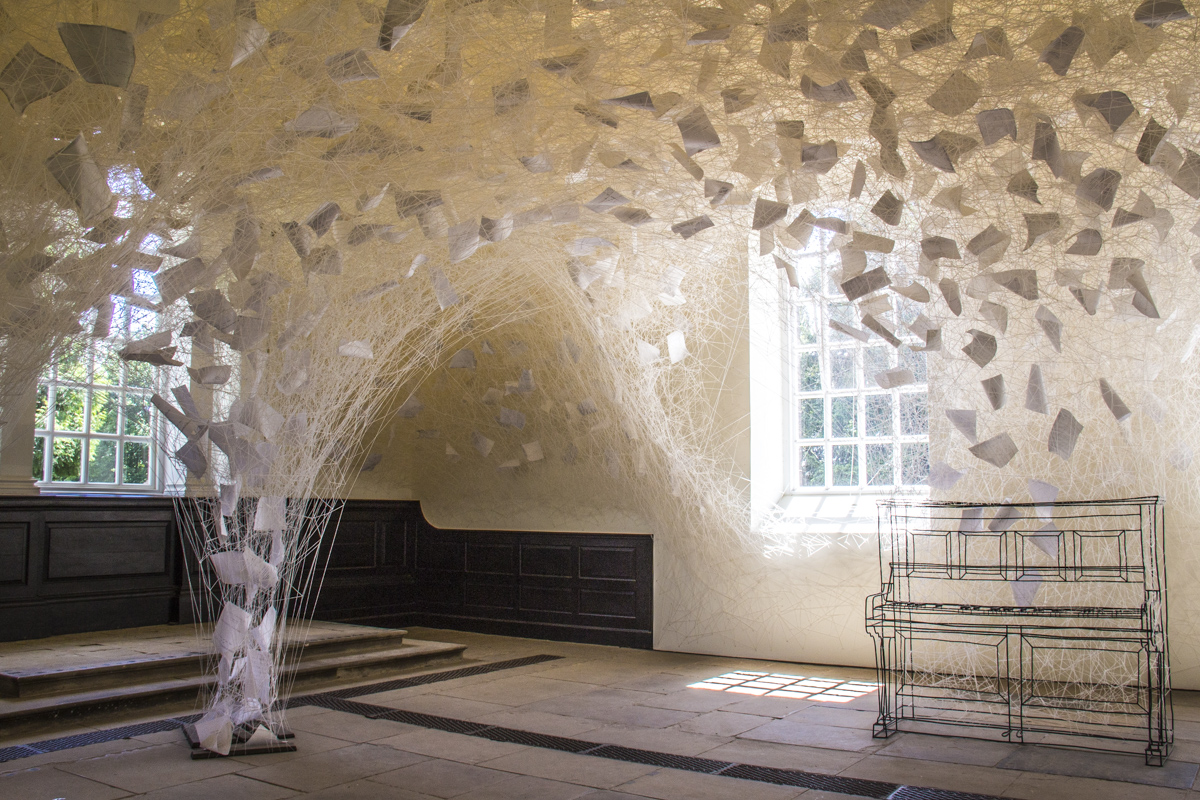 What to do next? When I emerged from the chapel I spent some time enjoying the statuary around me, including Henry Moore. Above me I could see three of a series of twelve sculptures that he created – his Upright Motives. I had already stopped to admire his Three Piece Reclining Figure No 1 on my way into the park and as I contemplated my next move I could see his Reclining Figure Hand in front of me. The park is the perfect setting for his huge sculptures that celebrate the beauty and power of the human body in non-traditional forms. Everything I could see beyond the meadow it commands was part of the Sculpture Park. 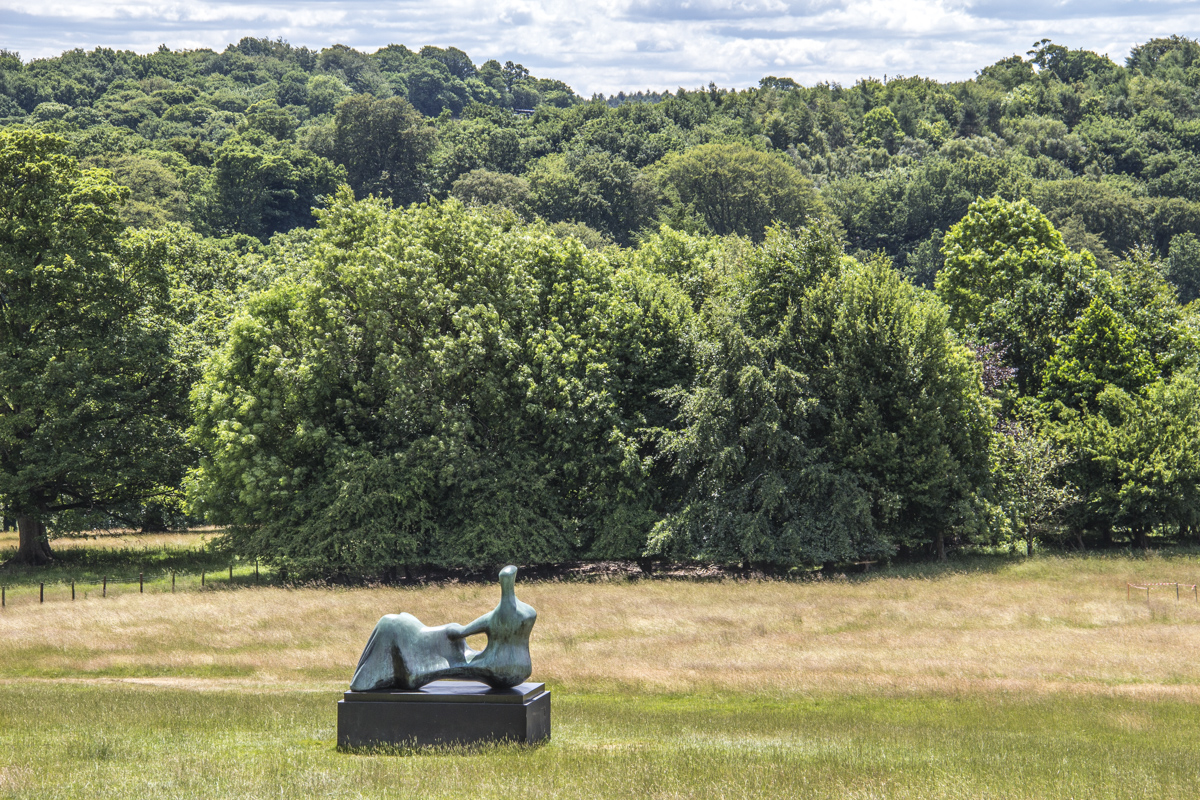 Having decided to walk along the escarpment overlooking the park and known as Oxley Bank I made my way across the Dam Head Bridge that crosses the River Dearne. I was temporarily diverted down to the bank of this river to watch a huge group of goslings paddling around in the water. Beyond this bridge the path took me alongside the lake that Thomas Wentworth Beaumont created when he built a dam on the river. It seems he enjoyed sailing his yacht Aurora on this lake. It was certainly the ideal setting for this activity and also a lovely place to have a picnic – which is what I did. 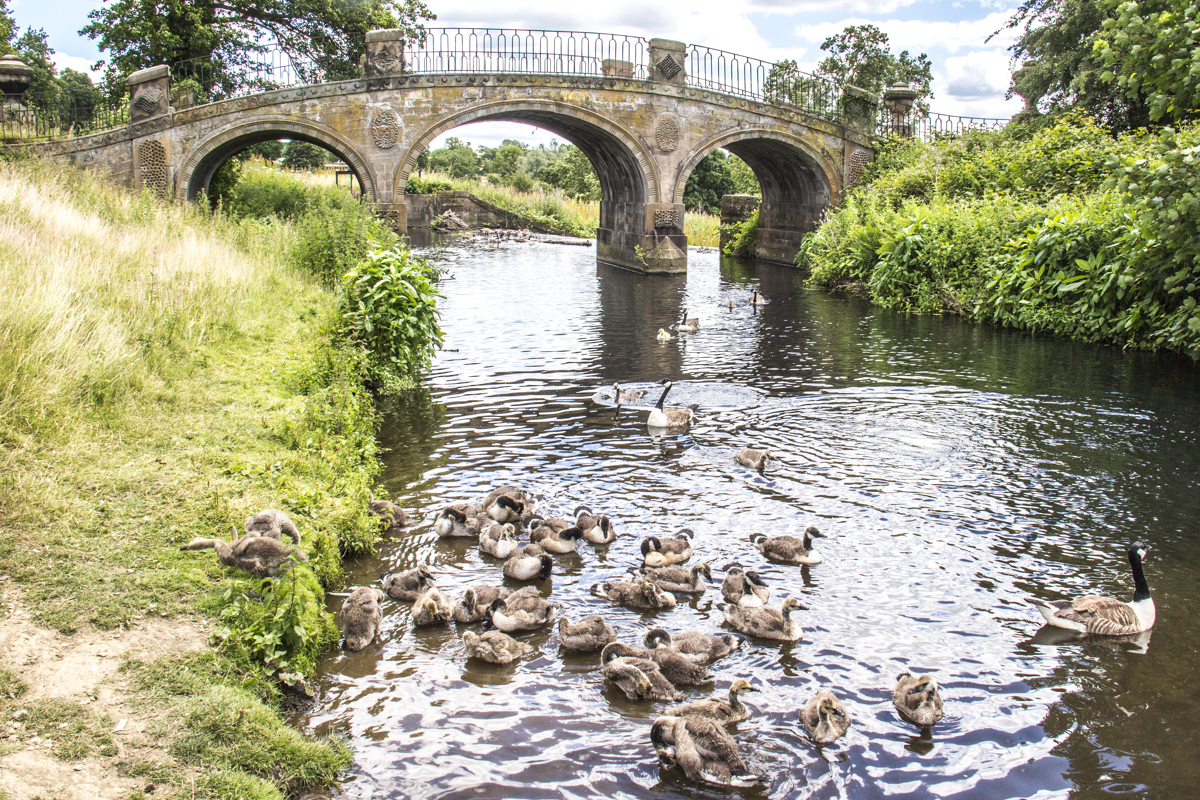 By the time I began my climb up the seventy-one steps to the top of Oxley Bank I had realised that many ordinary, everyday items such as sheep pens, signposts, litter and trees could be re-created as works of art. Although I had to concede that the row of brushes outside the Visitors’ Centre was not one of them. However, David Nash Seventy-One Steps is a site specific installation. The brass roots embedded in the path form another site specific installation, Speed Breakers created by Hemali Bhuta. It took a while to find them as they are so realistic. 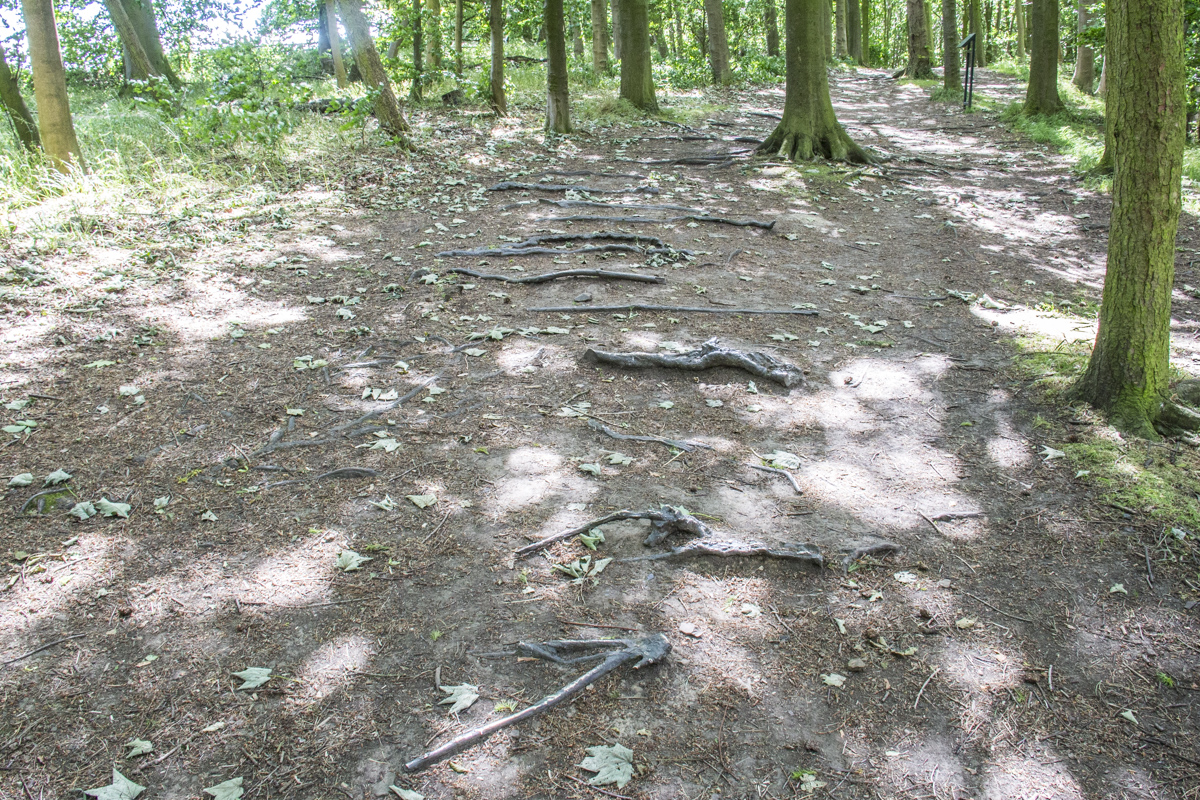 It was a long walk along the whole length of the bank but worth it for the great views across the fields. As parts of the estate are still used for agricultural purposes and it is not unusual to come across the occasional cow chewing the cud amongst the statuary. On my way I passed some other natural installations and also the Longside Gallery. I was not able to visit this gallery as it was closed while the next exhibition was being installed. 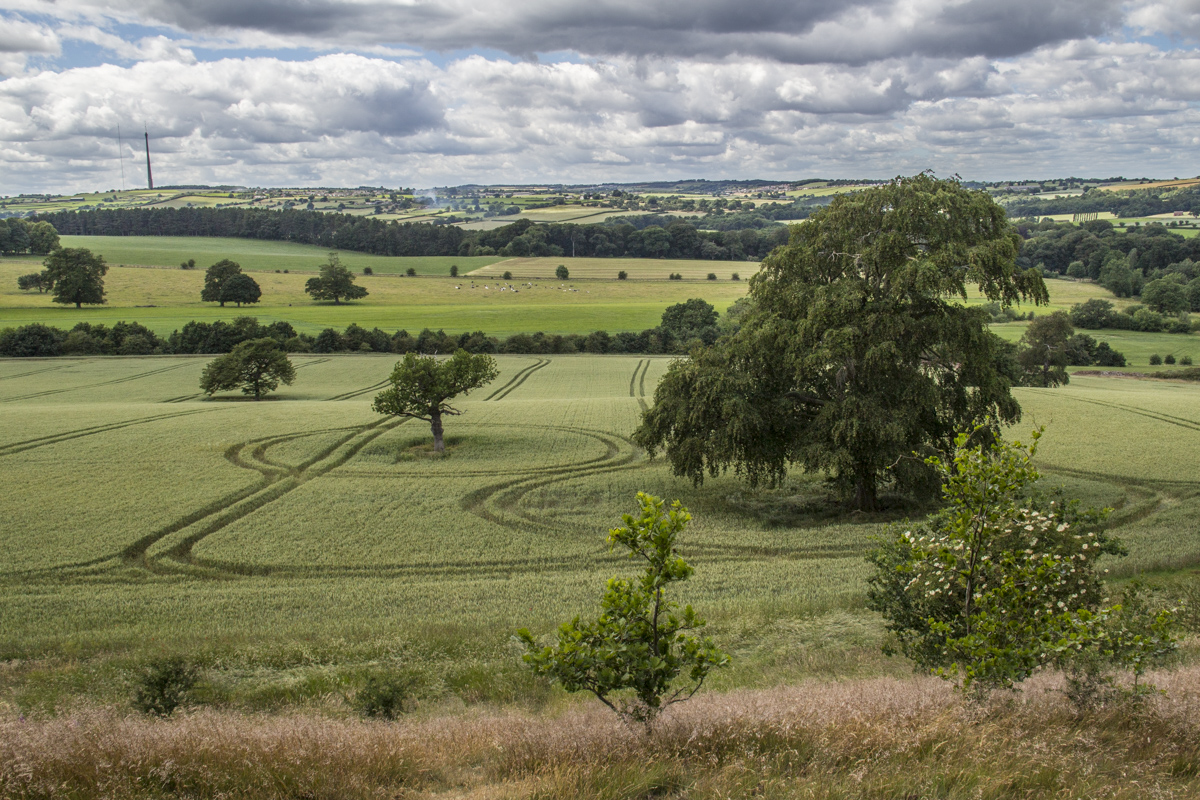 As I followed the path from the Oxley Bank into the Lower Park I passed an excellent representation of our times, a realistic work by Thomas J Price. Network portrays a man of our times concentrating all his attention on his mobile phone. It did bring a smile to my face. 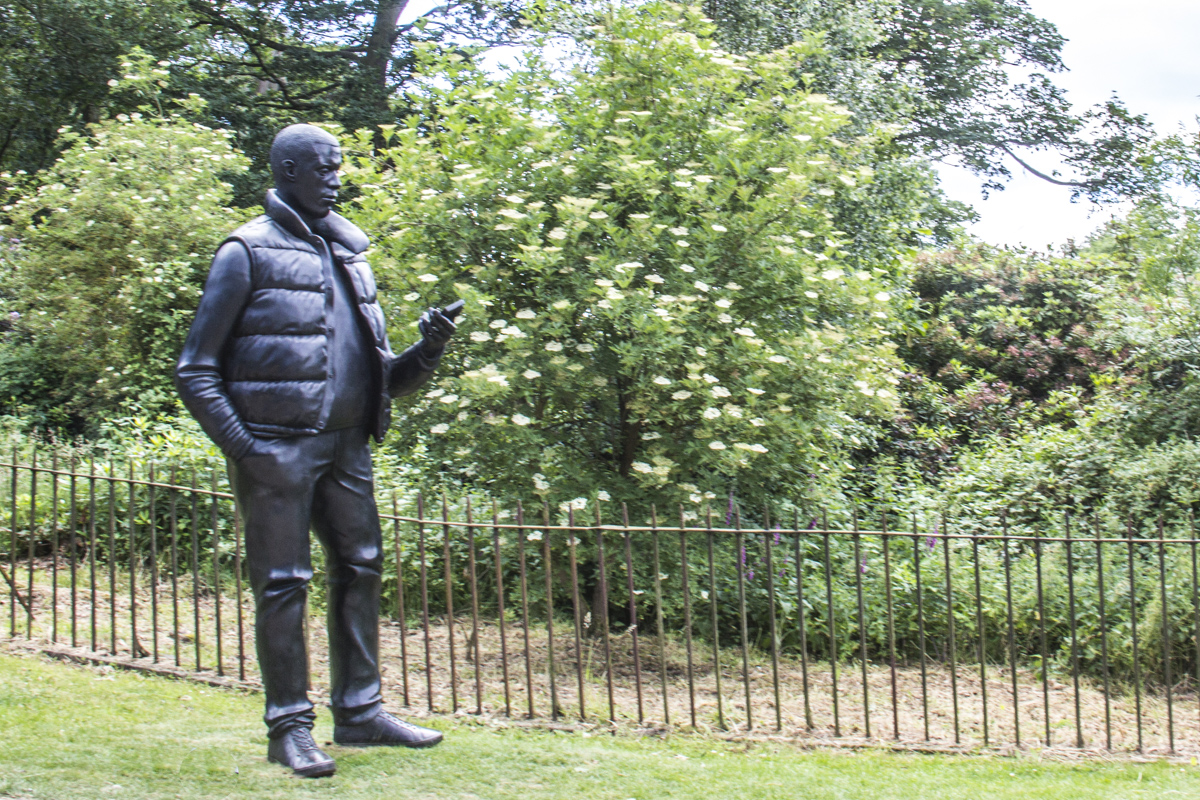 Before crossing the Cascades Bridge that divides the Upper and Lower Lakes I walked along the bank of the former and crossed the Stepping Stones to visit Wilsis a huge head created by Jaume Plensa. Wilsis is one of a series of young female portrait heads in a dreamlike state of contemplation. This huge creation, over seven metres in height is worth a close examination to appreciate its flattened perspective. It looks entirely different from the far side of the lake when visitors can also appreciate its beautiful setting. 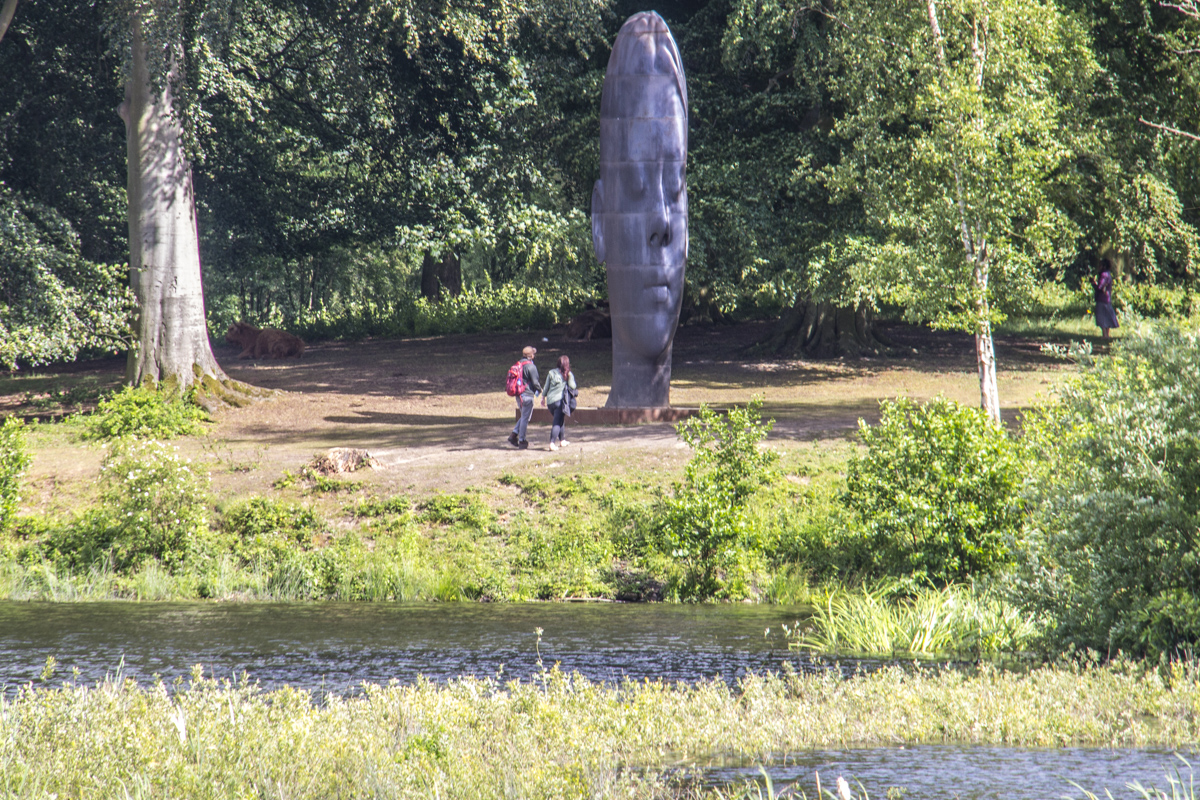 On the far side of the Cascades Bridge TREAD PAD pair 1 by James Capper provides a flash of colour amongst the green of the trees and the blue of the water. 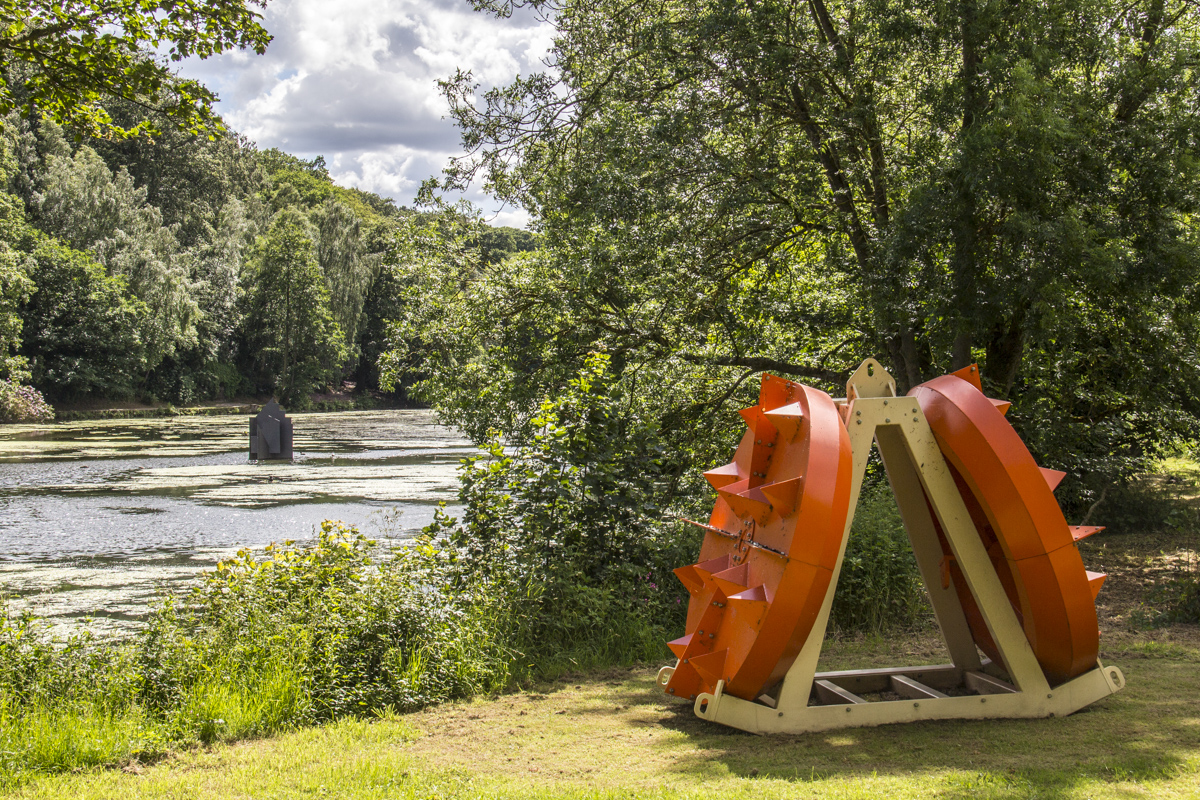 Turning away from the lake I headed towards the Camellia House passing a variety of interesting installations on my way. I particularly enjoyed the little army of identical sculptures marching across the meadow close to the hall. This work, entitled Black and Blue: The Invisible Men and the Masque of Blackness was created by Zak Ové . 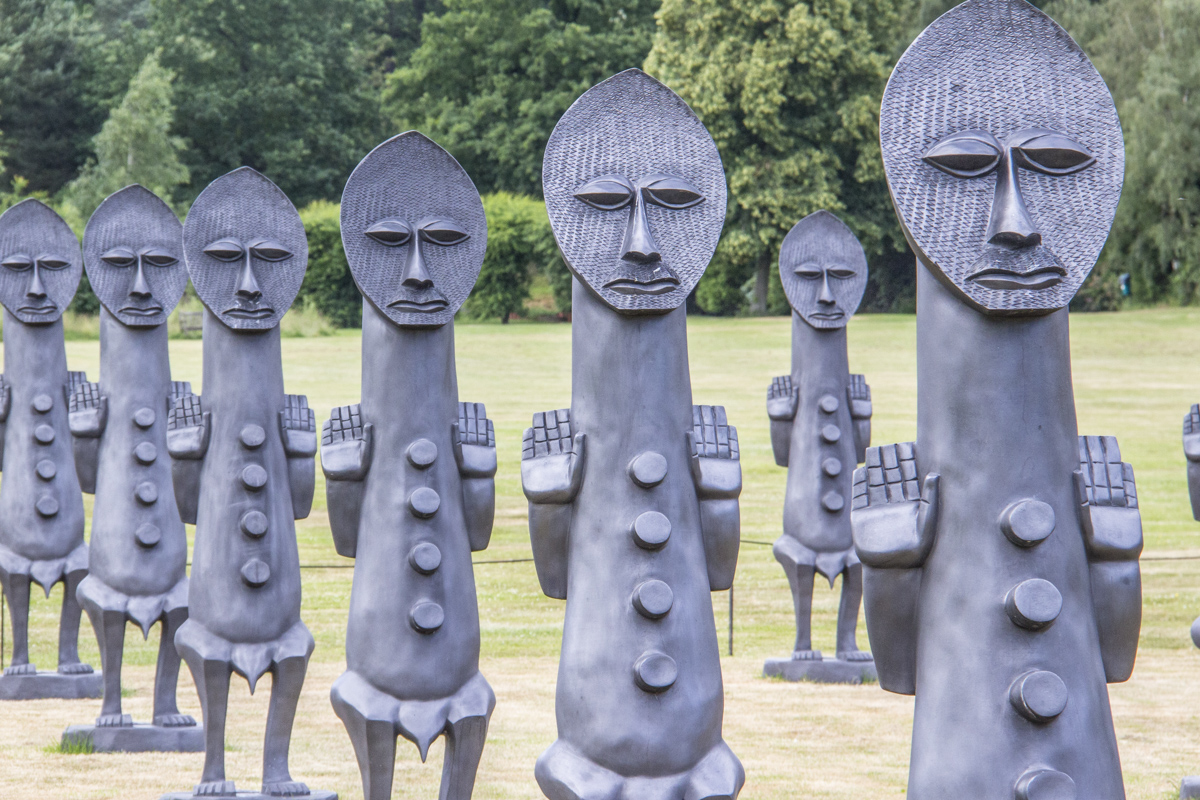 As I drew close to the Camellia House I discovered a huge hare sitting on the grass. Standing beside this massive construction by Sophie Ryder and simply entitled Sitting I had the illusion that I had suddenly shrunk to almost nothing. 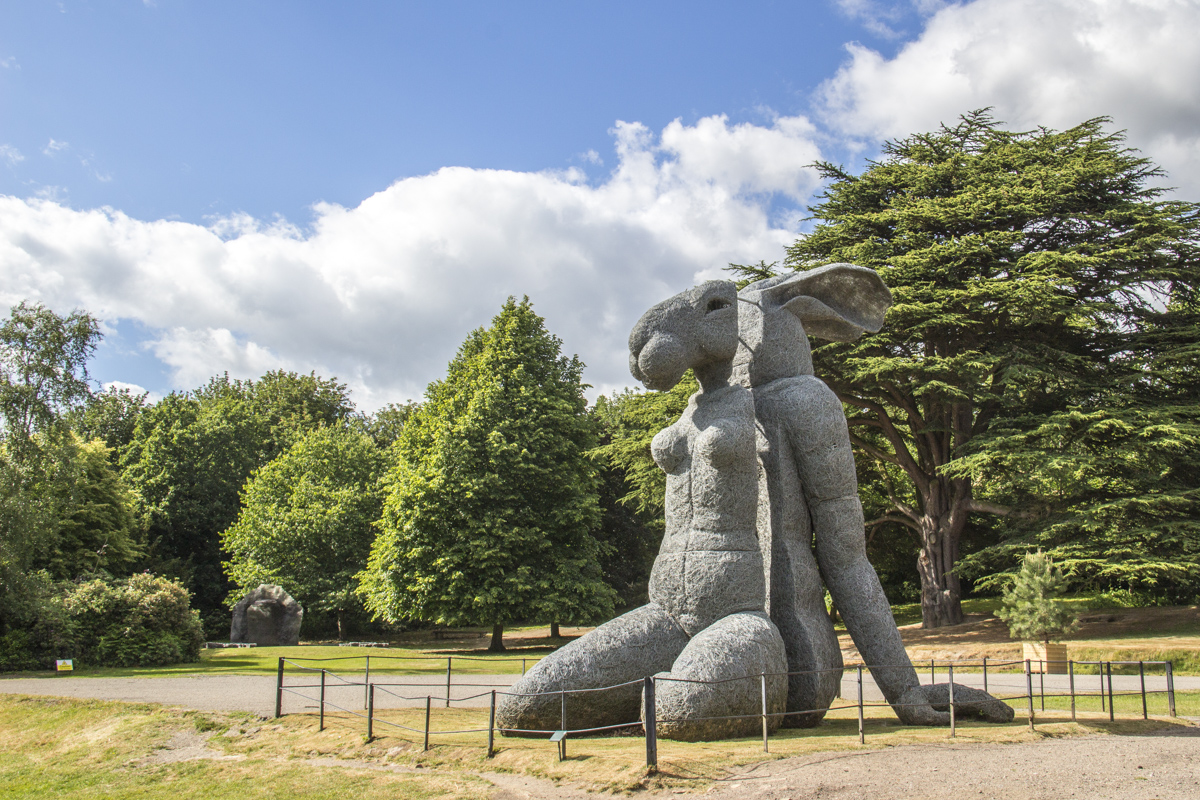 My vision of afternoon tea on the terrace of the Visitor Centre followed by a visit to its shop was fading fast as I flitted from one fascinating creation to the next. When I did finally arrive there I was too late to visit the Underground Gallery that had closed at five but I still had an hour to wander through the gardens behind the Centre. Scattered around these gardens were some intriguing tree sculptures. A small wood beyond these gardens is an enchanting setting for a small exhibition of works by Barbara Hepworth including The Family of Man A grand finale to my first visit to the Yorkshire Sculpture Park. 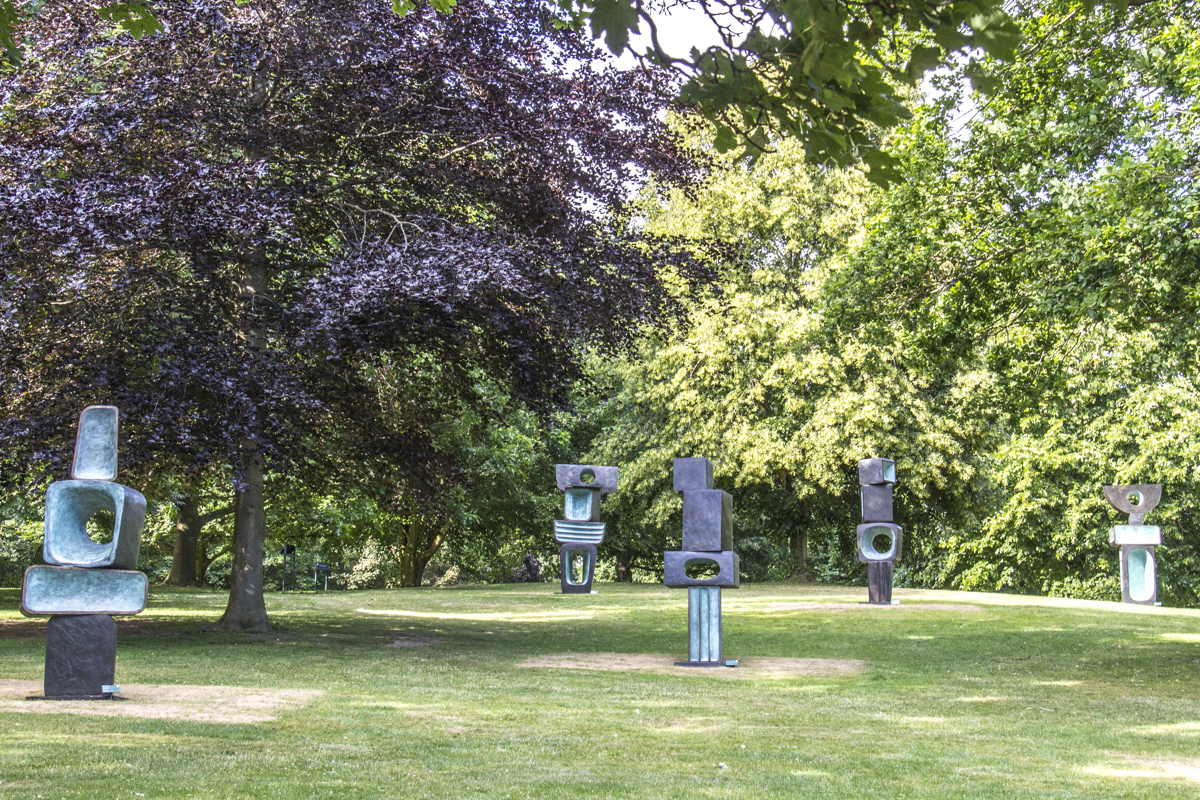 Conveniently located just one mile from Junction 38 of the M1 the Yorkshire Sculpture Park is seven miles outside Wakefield and twenty miles south of Leeds in West Yorkshire. SatNav WF4 4JX to arrive in the main car park.
There is no entrance fee to enter the park but visitors pay for parking – currently £11 for the day. Payment can be made using the machines outside the Visitor Centre at any time while you are there or online for up to 7 days following a visit. The car parks use automatic number plate recognition and in the event of non-payment, a parking charge notice will be issued via the DVLA.