Barrea, a unique historic settlement, straddles a rocky ledge above Lake Barrea in
Abruzzo, a region of Southern Italy. This region encompasses the beautiful beaches that fringe the Adriatic Coast, the mighty Apennine mountains and the fertile plains between the two. It is home to over three-quarters of the Parco Nazionale d’Abruzzo. Lazio e Molise generally shortened to PNALM. I visited Barrea, part of this park, while staying in Pescasseroli, the capital of the park, a short distance away. 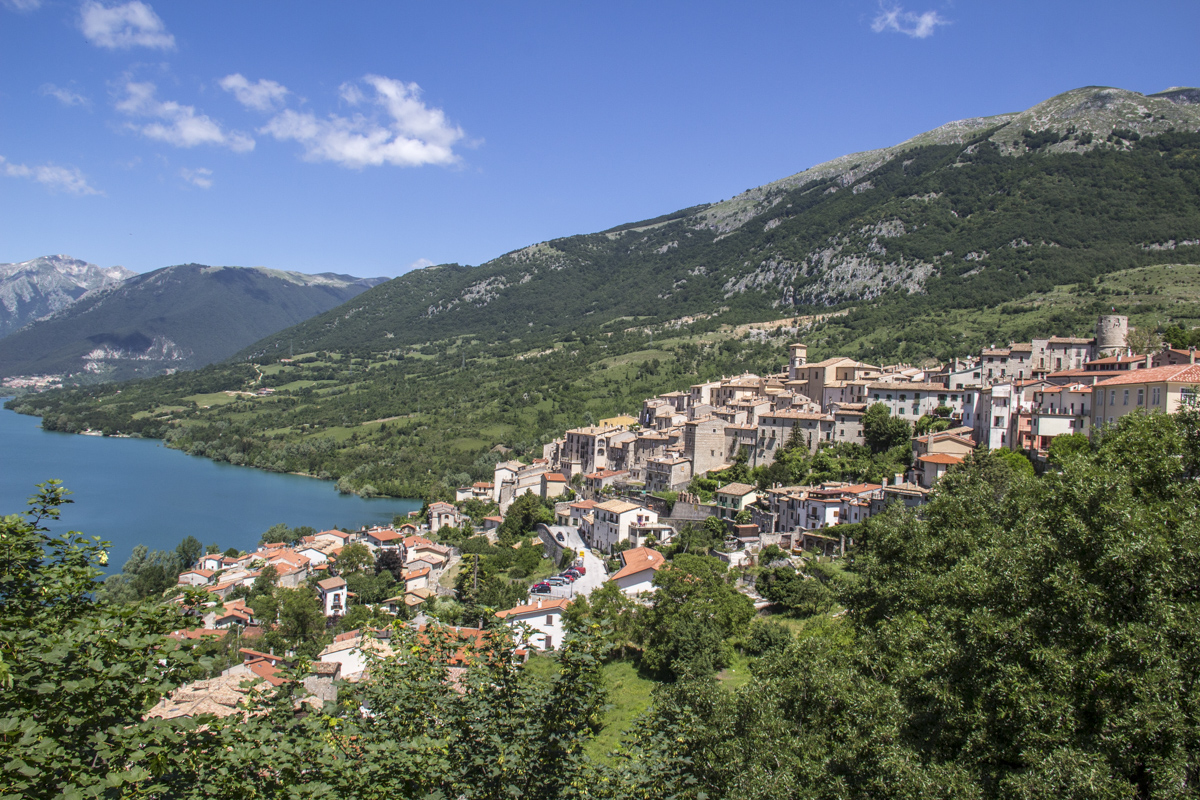 When the first settlers arrived in Barrea there was no lake just a river, the River Sangro, winding its way through a steep-sided gorge in the Valle del Sangro. The Italian journalist, Domenico Lanciano, describes this valley as the most beautiful valley in Europe. There is evidence that the Italian population of Samnites settled here between the sixth and seventh century BC. However, the first significant building in this area was the eight century Benedictine monastery of San Michele Arcangelo. This complex was destroyed by the Saracens in the eleventh century so the monks built a new monastery in a different location. This new building was a convent-fortress with high walls, small windows and shelves that jutted out to make it difficult to climb. The new location employed the natural defences of the river on one side and the gorge as protection. This monastery, today known as lo Studio is outside the historic centre just beyond the Porta di Sotto, one of two entrances through the walls of the settlement that developed close to the monastery. 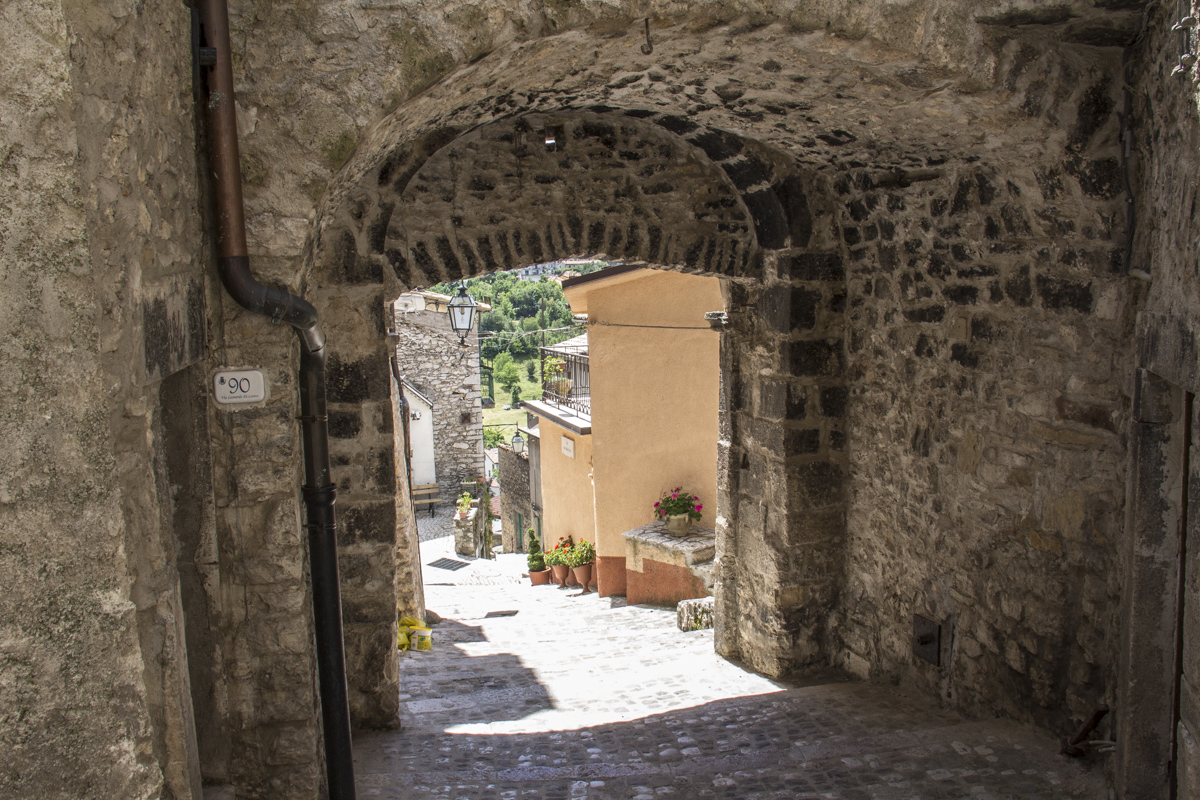 By the eighteenth century the monks had sold the monastery to the University of Barrea and it was partly used as a school before it was transferred to the municipality. The scholastic use probably accounts for the name Studio. Sadly, today lo Studio is in such a poor state of repair it is not open to visitors. Damage and degradation over the years and in particular during World War II resulted in a devastating migration of a large number of its inhabitants. Happily, the fortunes of this lovely settlement were revived followed the creation of the artificial Lake Barrea in 1951. 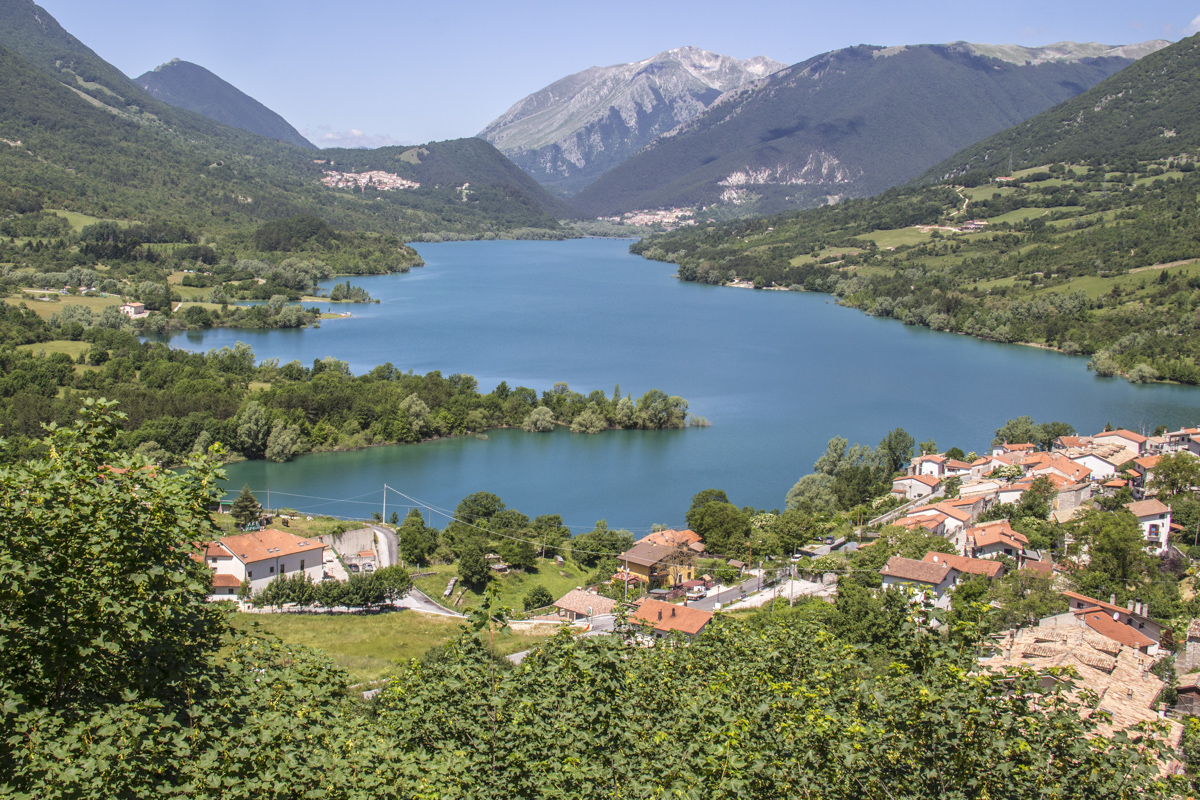 The lake was created when the River Sangro was dammed to construct a hydroelectric power station. This lovely expanse of water may have deprived the area of fertile land but its subsequent development as a major tourist attraction revived the fortunes of the town. Despite the devastation caused by the earthquake of 1984 this little town is thriving again as a popular centre for activities on and around the lake as well as just a very peaceful place to spend some quality time.
I drove around Lake Barrea on my way to visit the town. 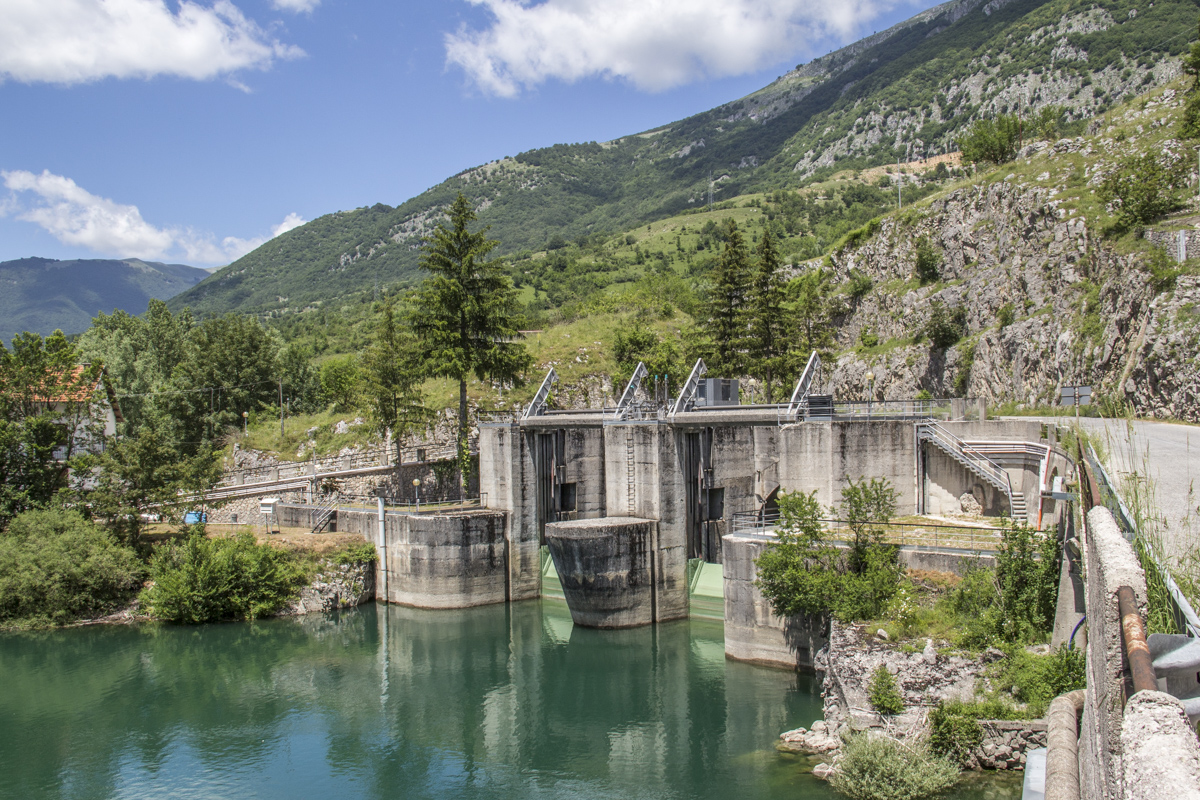 The historic centre is not accessible by car so I parked a short distance from the town by a terrace with a panoramic view of the lake below me. A short street lined with shops, cafés and pizzerias leads to Porta di Sopra the entrance to the historic centre through a wall of tall narrow buildings that formed a defensive ring around the town. 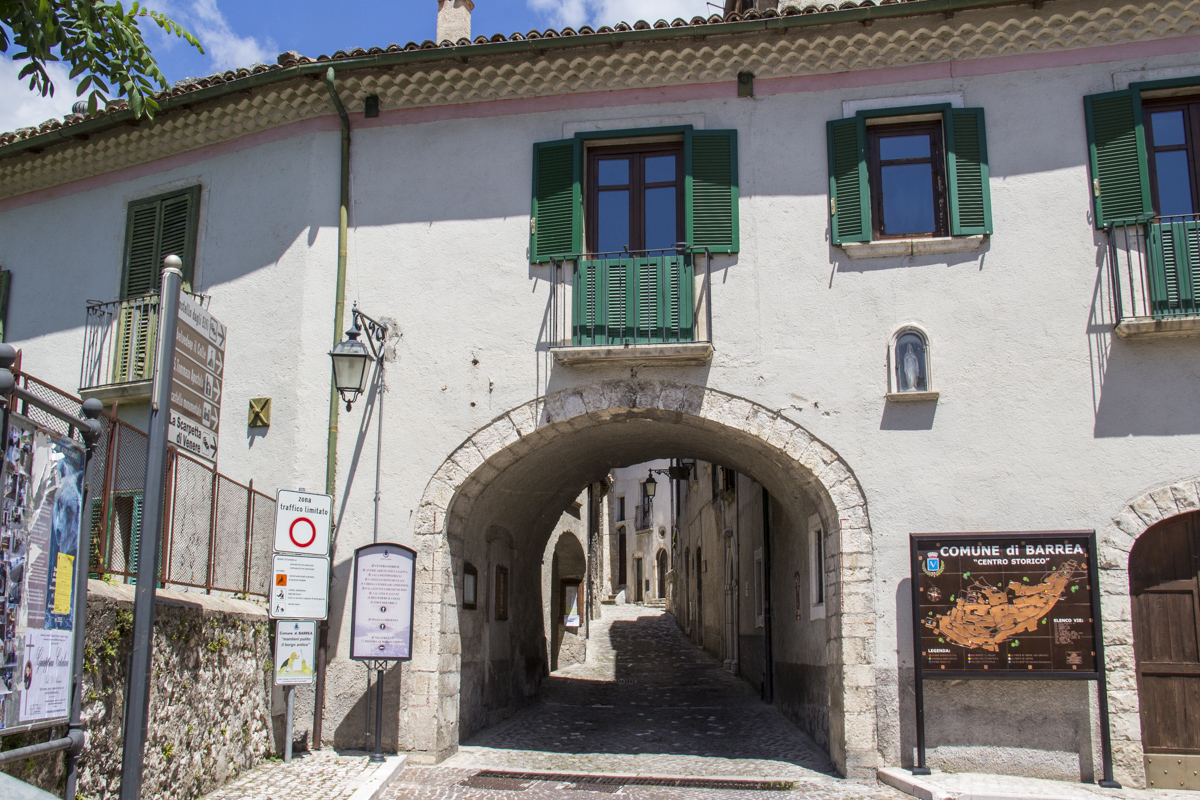 Shortly after going through the gate I discovered one of the town’s main attractions, the Antiquarium of the Safina Civilization. What it lacks in size it makes up for in importance as this small museum, opened in 2007 houses funeral artefacts dating back to the sixth century BC, found during the excavations of the necropolis Colleciglio of Barrea. The funerary objects found in the coffered tombs, typical of the Samnites are all of children under the age of ten. Barrea is also home to another specialist museum, the Sala dei Pipistrelli (the room of bats). This centre, open to visitors, is dedicated to the study and knowledge of bats of which there are twenty-six species in the surrounding parkland. 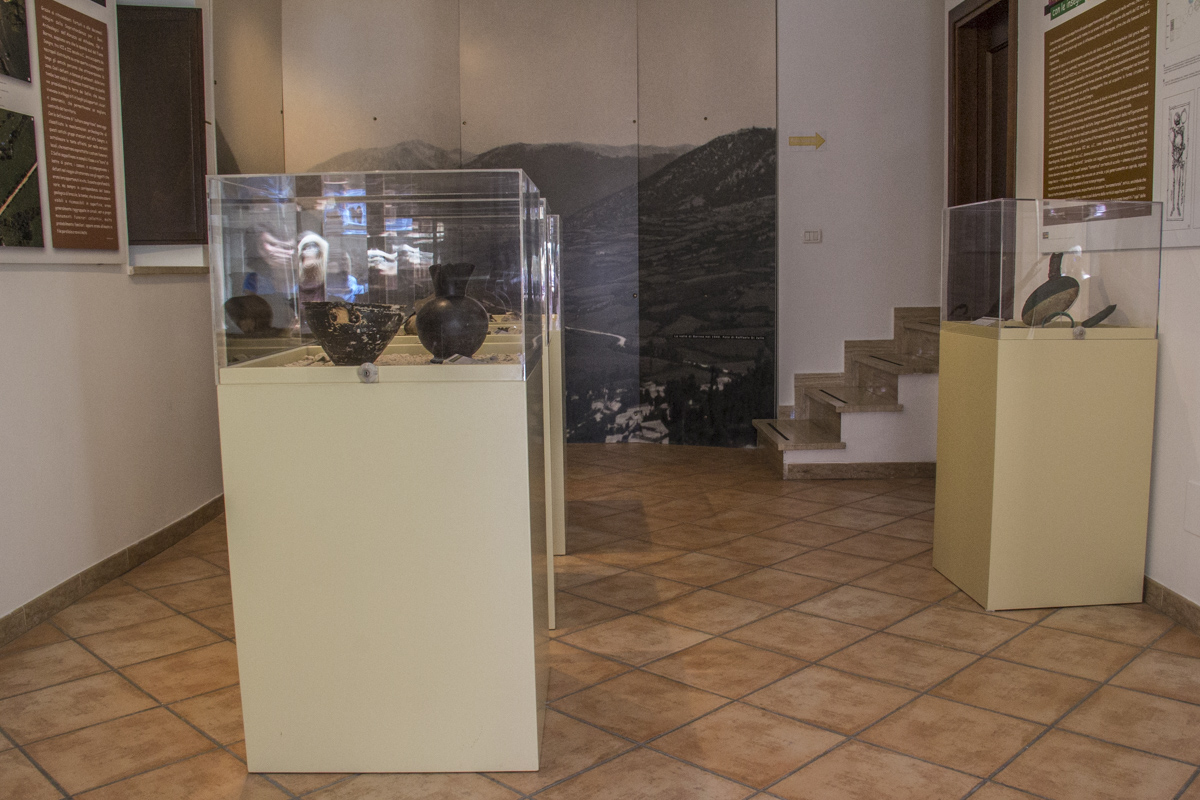 Through the tangle of narrow, cobbled streets, punctuated by flights of stone steps I found my way to the main square Piazza Umberto I. On one side of this square is the Palazzo Municipale or town hall. 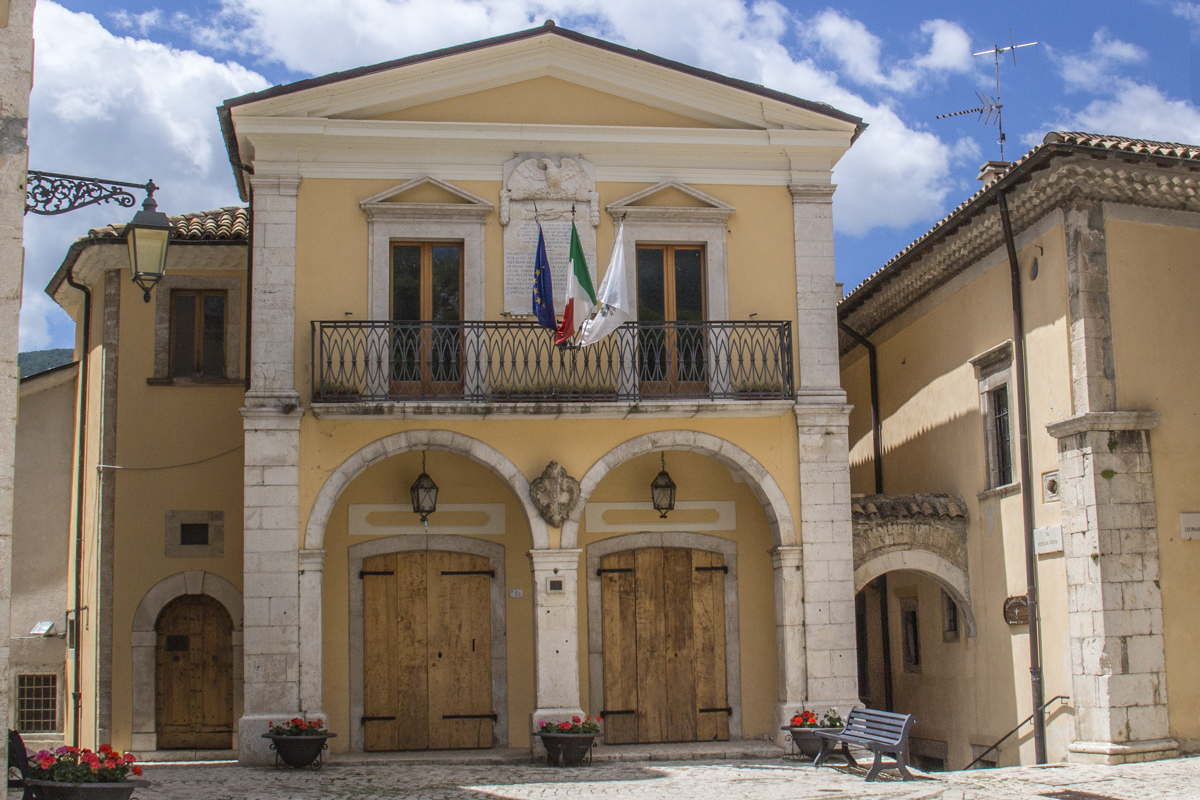 On the other side the parish church of Barrea, Chiesa di San Tommaso Apostolo originally built in the thirteenth century. Repeatedly damaged by earthquakes, fires and wars it has been rebuilt several times and today the interior is decorated with stuccoes and baroque gilding dating from the seventeenth century. This church was not the original parish but was promoted to this role following the addition of a Renaissance portal in 1569. The original bell tower collapsed after an earthquake at the beginning of the eighteenth century and was replaced by a new one in 1710. During the German occupation in World War II the church was set on fire and badly damaged. After the war it was restored and a new fresco was commissioned for the back wall of the main altar. 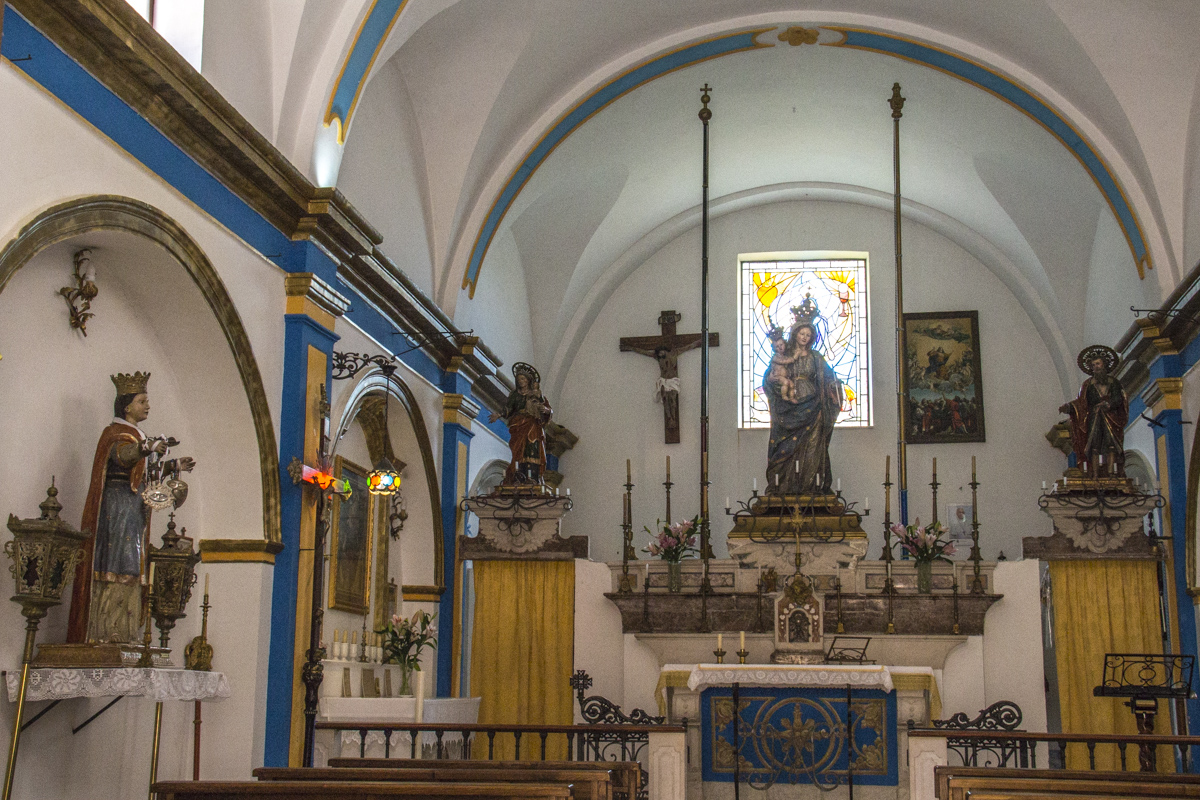 Throughout my exploration of the town I had been aware of the towers of the Castello di Barrea looming above me. I was saving the best till last as I was sure I would have wonderful views from the top of its tower. I climbed up a long flight of stone steps to the entrance. The castle still has its two towers. The oldest and highest is square and from here I had a good view of the natural defences of the original settlement with the gorge on one side and the lake (then a river) on the other. 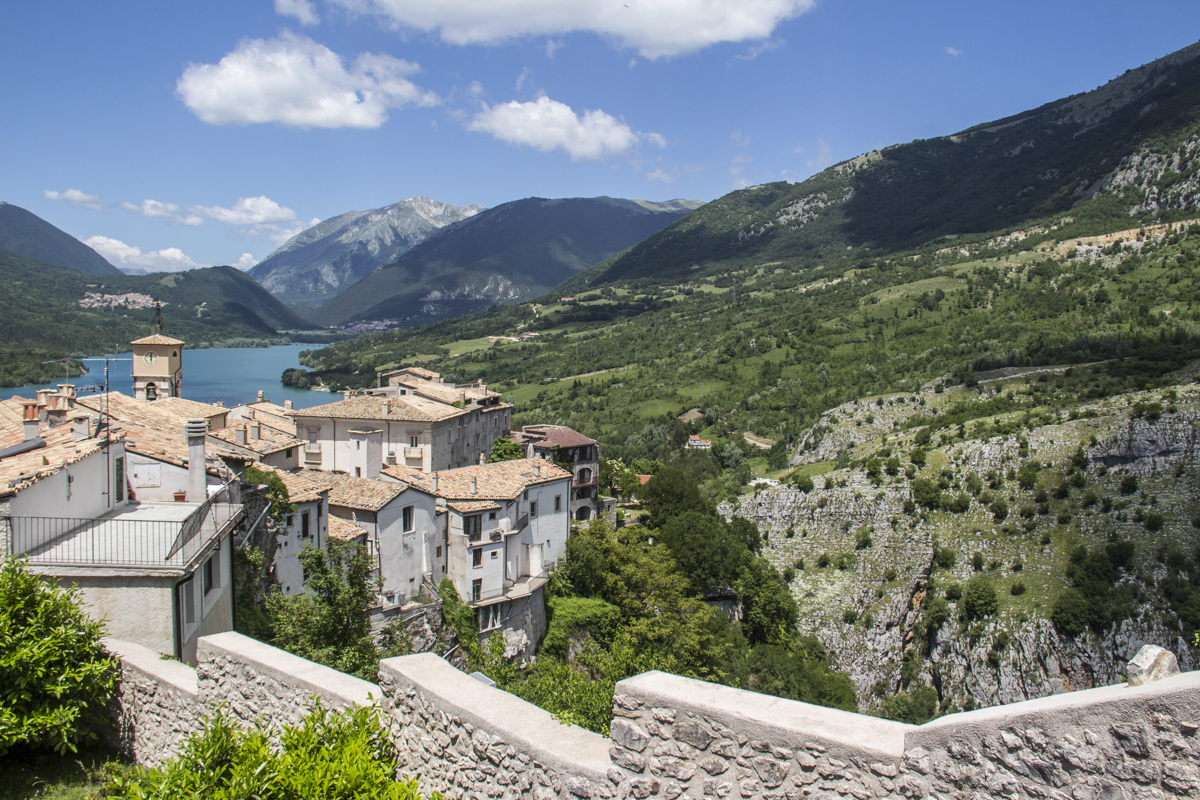 I also had a very good view of the second circular tower below me. The two towers are joined by perimeter walls with terraces at different levels. Even though this complex is referred to as a castle in reality it is more like a defensive bastion to protect the village below. The original castle was built during the eleventh century by the di Sangro family, the first feudal lords on Barrea. Their square tower was destroyed in 1230 during the struggle between Pope Gregory IX and the Emperor Federico II. The tower was re-built in the same place using stones re-cycled from the original tower. The second tower was built during the fifteenth century by the Caldora family, then the barons of Barrea. This circular tower was built to defend the Porta di Sopra, the most important of the two entrances into the town. 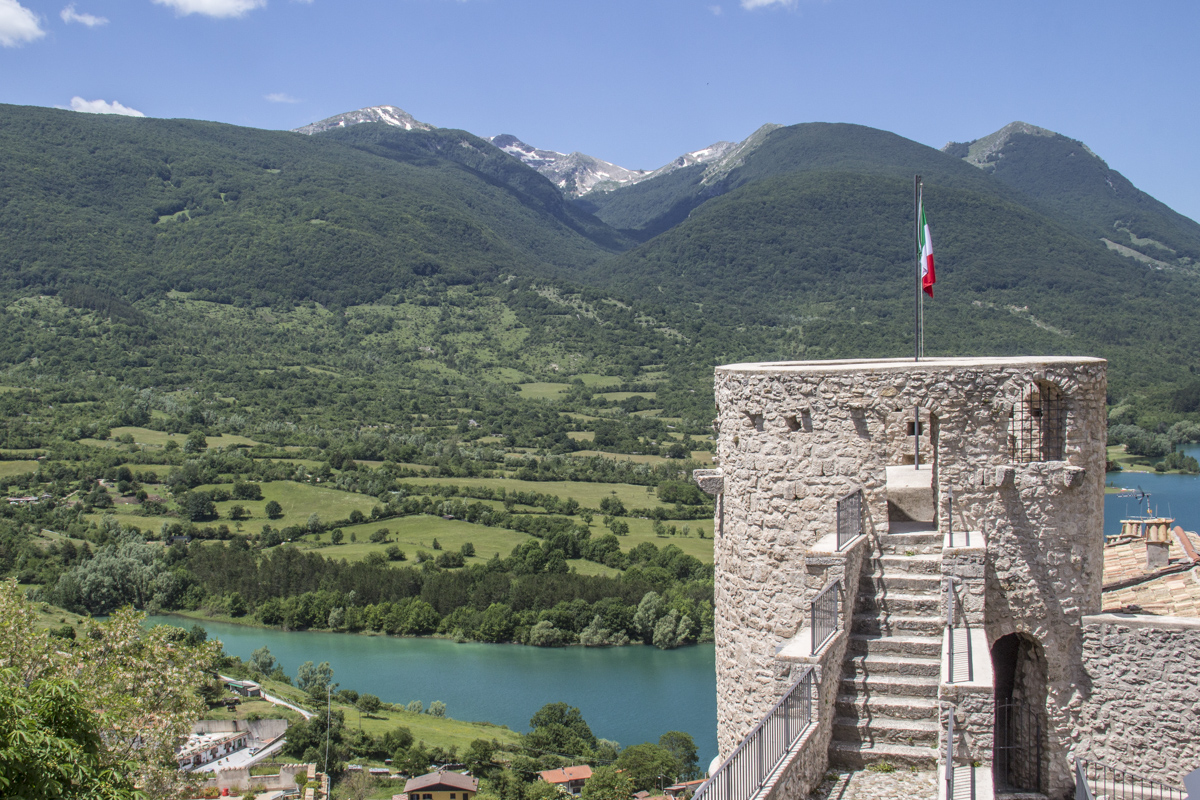 As the centuries rolled by the castle passed through the hands of several different families who ruled Barrea earthquakes and local battles took their toll and it fell into disrepair. Then, in 1812 the mayor of the town, in an effort to protect his people from violent raids of bandits, restored the walls and the fortunes of the castle. Four years after the unification of Italy in 1860 the whole complex was sold to the di Loreto family. After World War II the family partially restored the complex and opened it to the public with the support of the local authority. Between 1960 and 1984 the complex was used as a venue for a variety of events until the earthquake of 1984 made it unsafe and it remained empty for the next twenty years. In 2006 the di Loreto family gave it to the municipality of Barrea. Since 2010 the castle has been open to the public. A lovely place to spend time enjoying its nooks and crannies as well as the magnificent views of the Valle del Sangro and Lake Barrea below. It was fun framing images in the windows of the tower. 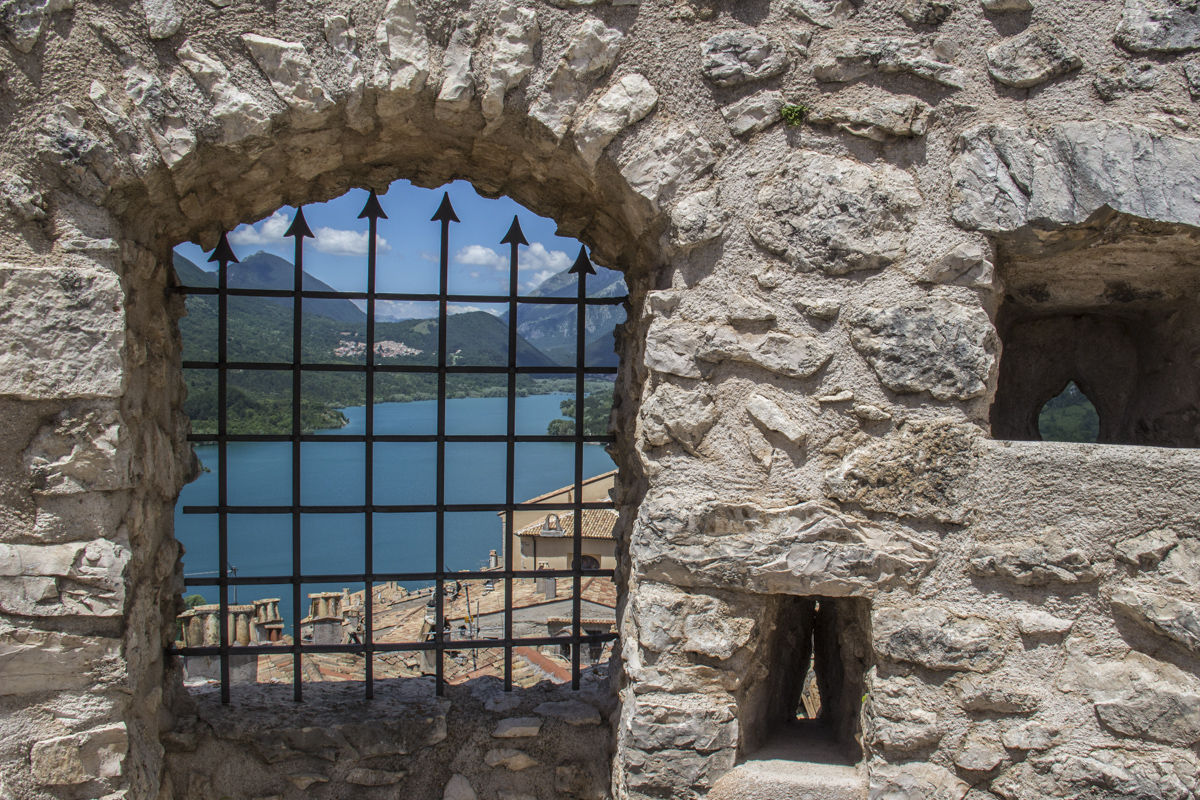 I flew from London, Heathrow, to Rome, Fiumicino with Alitalia. There are regular long-distance buses from Fiumicino to Alba Adriatica in Abruzzo where I started my tour, run by Gaspari which are easily booked online. Thereafter I used local trains and buses. But Abruzzo does not have a very good public transport system (part of its charm for me) so hiring a car is probably preferable. It takes 2 to 2½ hours to drive from Fiumicino Airport to Pescasseroli depending on the traffic.