Exploring the Cathedrals and Abbeys of Northern England

It was a big step to take, going on a special interest holiday, but I was curious to see what it was like spending a few days learning about one topic in depth. As I have always had a fascination for churches I chose the Cathedrals and Abbeys of Northern England, organised by the Cultural Travel Company, part of the Martin Randall Travel group. Our group of twenty-seven was based at the Novotel inYork throughout the trip and we travelled in a luxury coach to the cathedrals and abbeys we visited. The itinerary was well-balanced and optimised our time during the four days of the holiday. On our first afternoon we walked through York city centre to York Minster. Before we left our hotel each one of us was given a whisperer with an earpiece so that we could hear our speaker, Jon Cannon who gave us an introduction to Medieval history as we walked along. It was my first introduction to the whisperer and I was very impressed although I was glad I had my own headphones with me as I have never been able to tolerate anything inside my ear. When we reached the Minster, Jon talked about the exterior of the building and also introduced us to Constantine the Great a Roman emperor who promoted Christianity in Europe laying the foundations for the development of our Medieval church buildings. 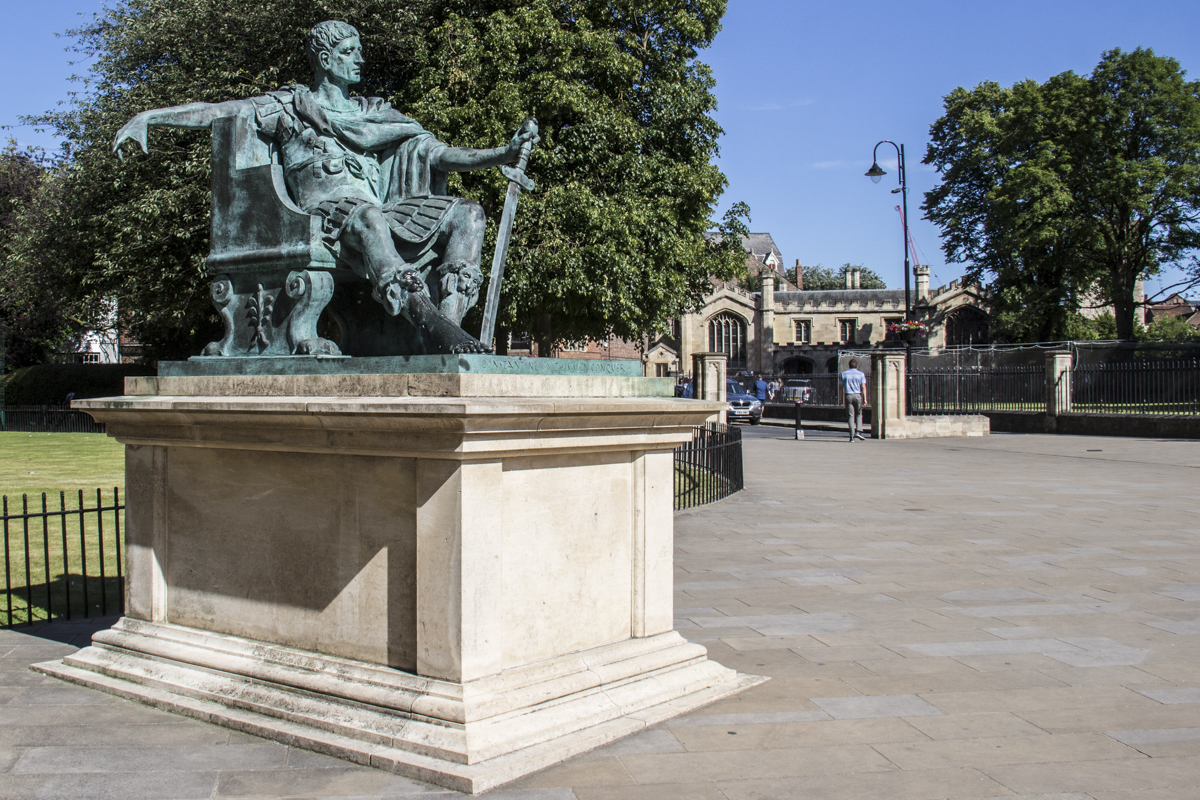 As we stood outside the magnificent York Minster listening to Jon I found myself being transported to another era, a time when the church was all-powerful and its elaborate carvings, art and stained glass windows were the only way to convey the message of Christianity to a mainly illiterate population. As the church was the most important institution it’s buildings exhibit changes in architectural styles over the centuries. York Minster is Britain’s largest Gothic cathedral and has some excellent examples of Early English Gothic. It was news to me that Gothic was not an all-embracing term and during the trip I was also to become familiar with the terms Decorated Gothic and Perpendicular – both of which are also to be seen in this Minster. Why Minster and not Cathedral was another mystery to me and one that was quickly solved. Minster is the Anglo-Saxon word for monastery and came to mean any religious community, not just monks. Before the parish church we had mission churches or minsters and some cathedrals have retained this name. On the exterior of York Minster there are some beautiful examples of the typical pointed arches associated with Gothic architecture. 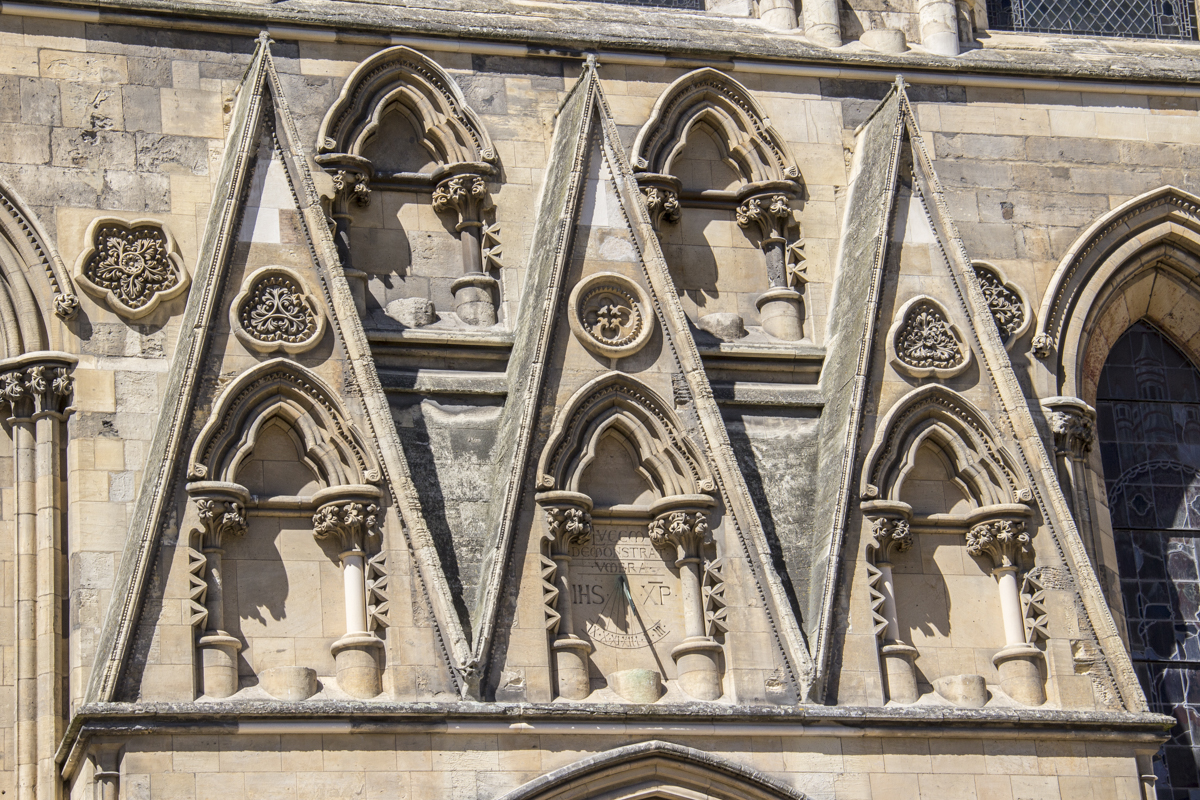 Inside I was entranced by the extraordinary array of stained glass windows including the famous thirteenth century five sisters and the great east window. The latter, the largest expanse of Medieval stained glass in the country dates back to the fifteenth century. This masterpiece in glass and stone depicting the beginning and end of all things has recently been restored, a project that took twelve years and cost £20 million. Every single piece of glass was removed and cleaned before being replaced. Today, modern techniques have replaced the use of lead to both create and mend stained glass panels so more light floods through this window than previously. I learnt a lot about Medieval church architecture during that visit and found Jon very easy to listen to. 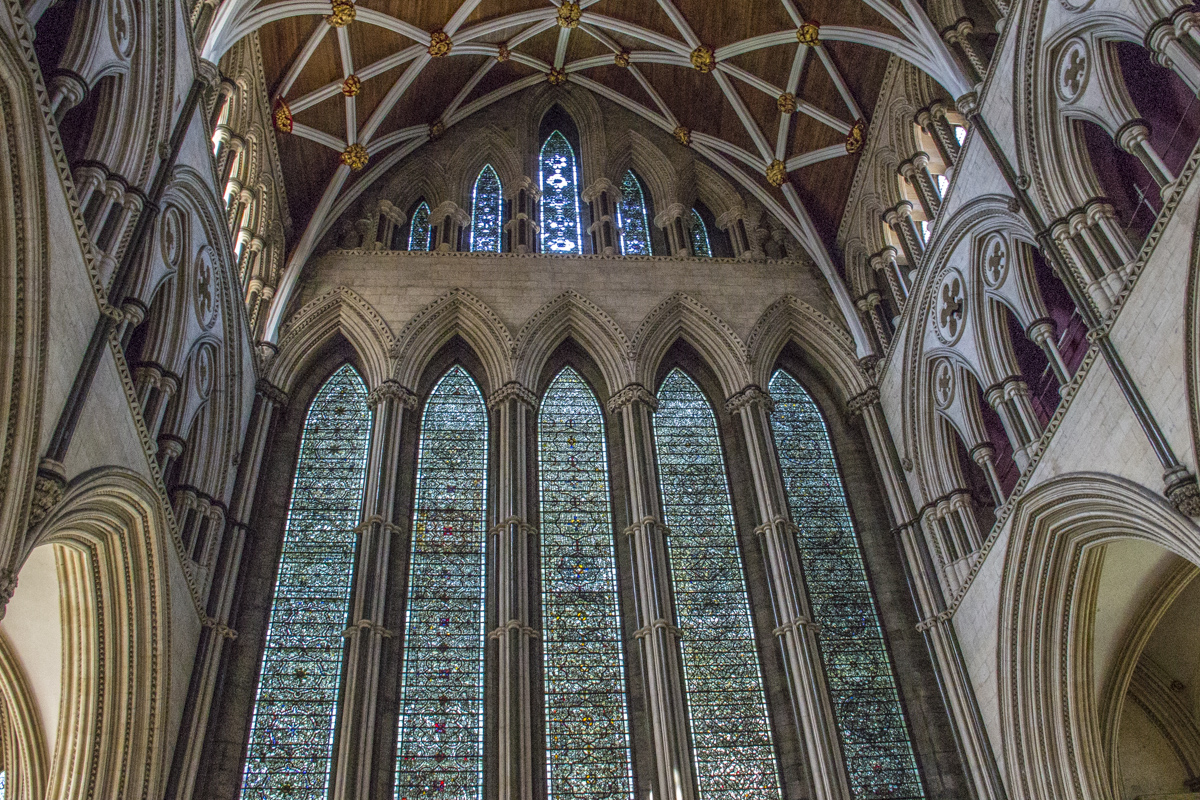 The group dined together in the hotel that first evening and I had been slightly apprehensive that everyone would know so much more than me about Medieval architecture that I would feel out of place. I need not have worried as the conversation flowed easily around the table as we all got to know each other. It was a very diverse group including two Germans and four Americans so we had plenty to talk about. I was looking forward to the next morning when we would be visiting Beverley Minster. 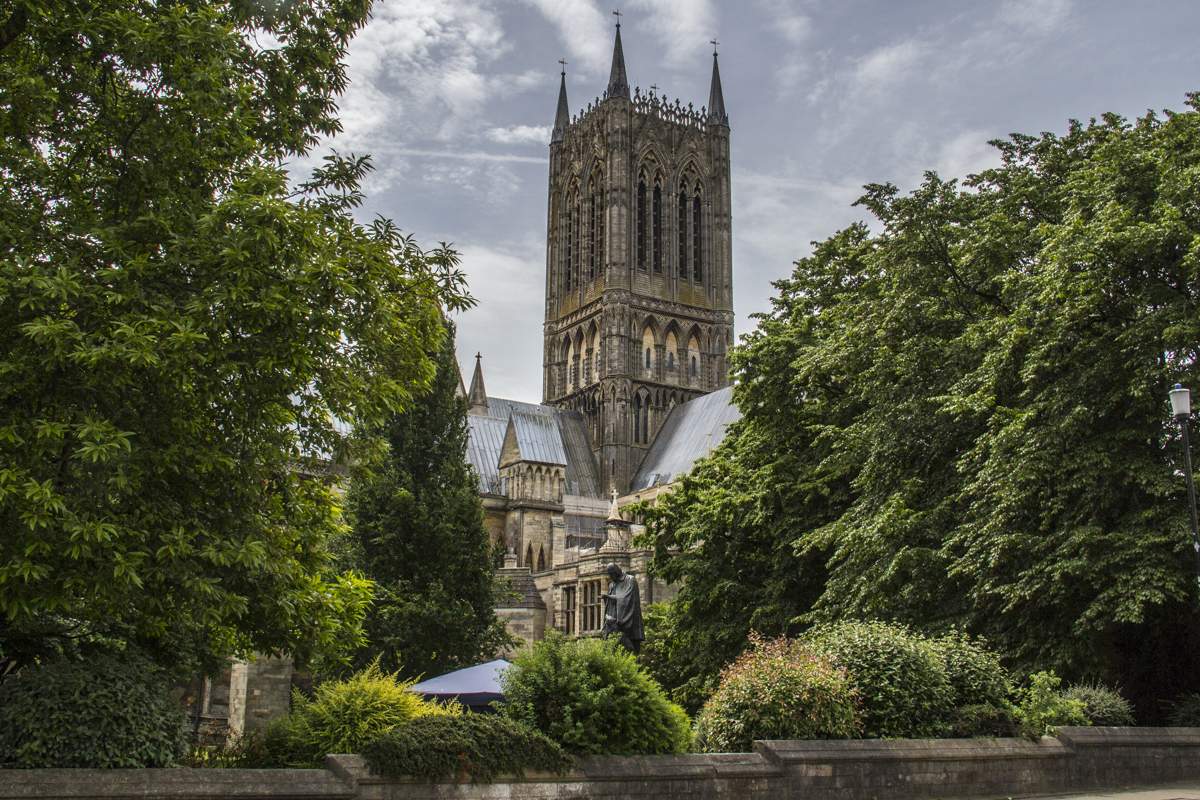 Beverley Minster is also a fine Gothic building decorated with columns of Purbeck marble. The Romans had discovered the best sources of building stone in England, a very useful legacy for the creators of our cathedrals. During our journey from York to Beverley Jon set the scene regarding the creation of this minster and reminded us that the church was the longest lasting and most successful European organisation. One reason for this was because they spoke a common language, Latin, which was a throwback to Roman times. I found these explanations very enlightening and it was also a good opportunity to ask questions. On arrival in the town there was time for a coffee before strolling to the minster. Beverley Minster also features the three stages of Gothic styles of architecture. Jon showed us how the Early English style had involved playing around with different effects such as the linear effects of light and shade and different coloured stone – but always very elegant. The next phase, Decorated Gothic, loved marginalia for example small carvings on the tops of the columns and friezes on the walls. Here, a carved frieze featuring musicians was created for entertainment The porch at the town entrance to Beverley Minster is a good example of the last phase of Gothic, Perpendicular. 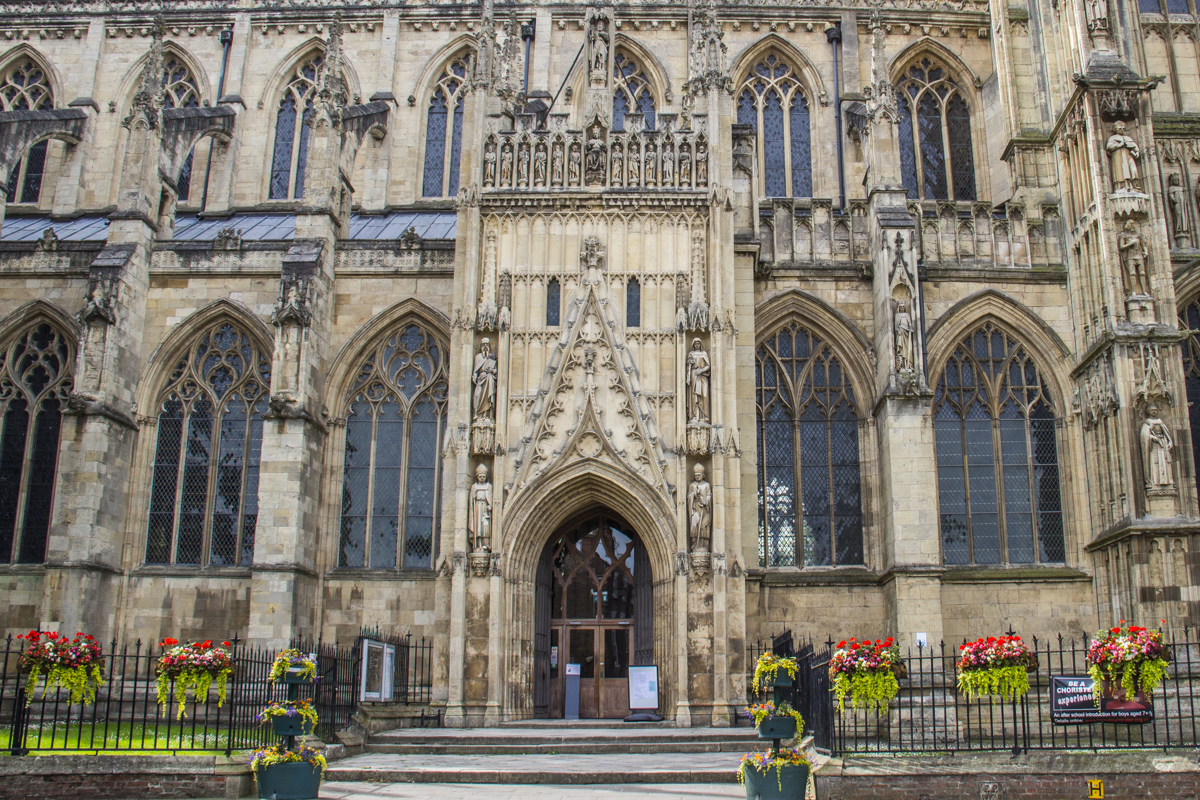 We moved on to Lincoln and on arrival there we had some free time for lunch which was an opportunity to explore the town before our tour of Lincoln Cathedral. As usual we started our tour looking at the main features of the exterior of the building. When it was built architectural changes were taking place and the move from Romanesque to Gothic in Medieval times had started. We could see some of the semi-circular arches associated with the Romanesque period on the West front. 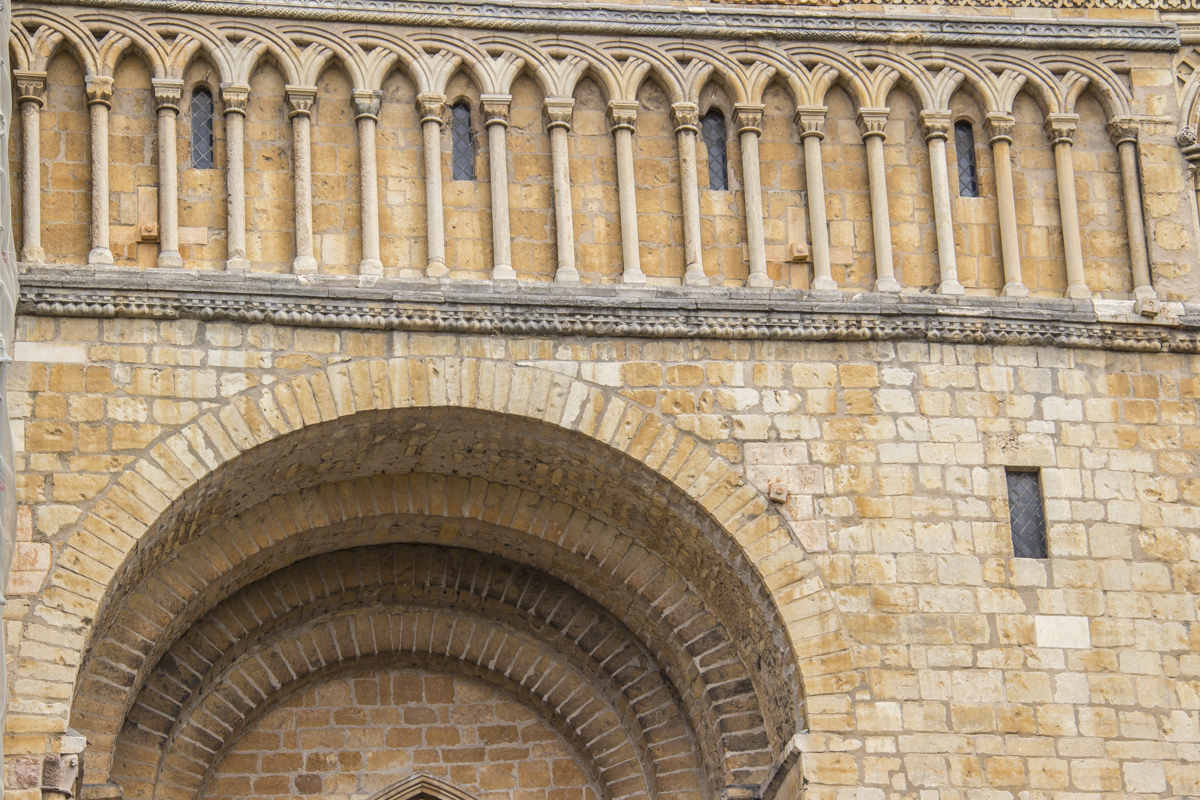 Inside the cathedral, next to the shrine of its founder, Saint Hugh, is a large swan. A reminder that he had a swan that followed him everywhere. After the cathedral was completed St Hugh’s East end was removed and an open space was created for the shrine that contains his head. A very poignant tomb in this cathedral is that of little Saint Hugh a young boy whose death in 1255 at the age of nine was falsely attributed to the Jews. Although he is referred to as a saint he was never actually canonised. 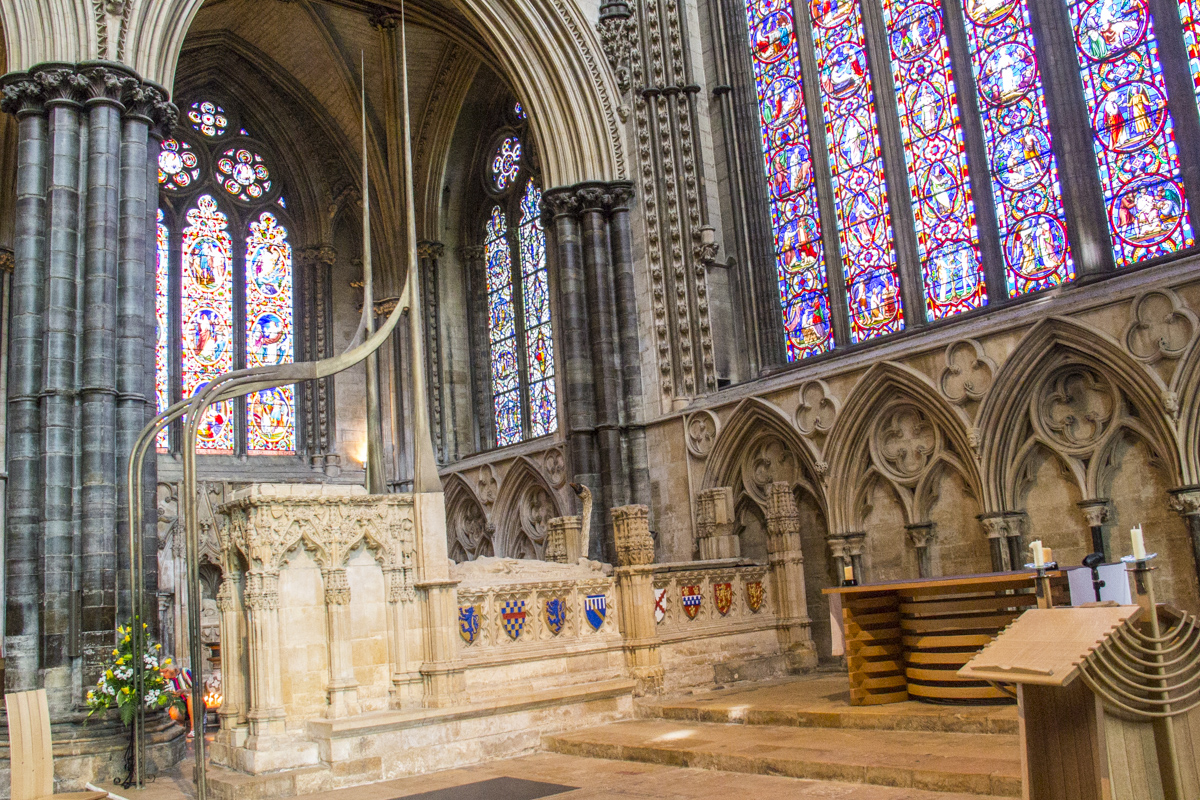 Our third day started with a visit to the haunting ruins of Rievaulx Abbey nestling in the foothills of the North York Moors. This was my favourite place. We were lucky with the weather and the blue of the sky punctured by the spiky ruins of the abbey created a memorable image. In particular the dramatic remains of its Gothic church. We spent some time in this church comparing its simplicity with other Gothic churches we had seen. 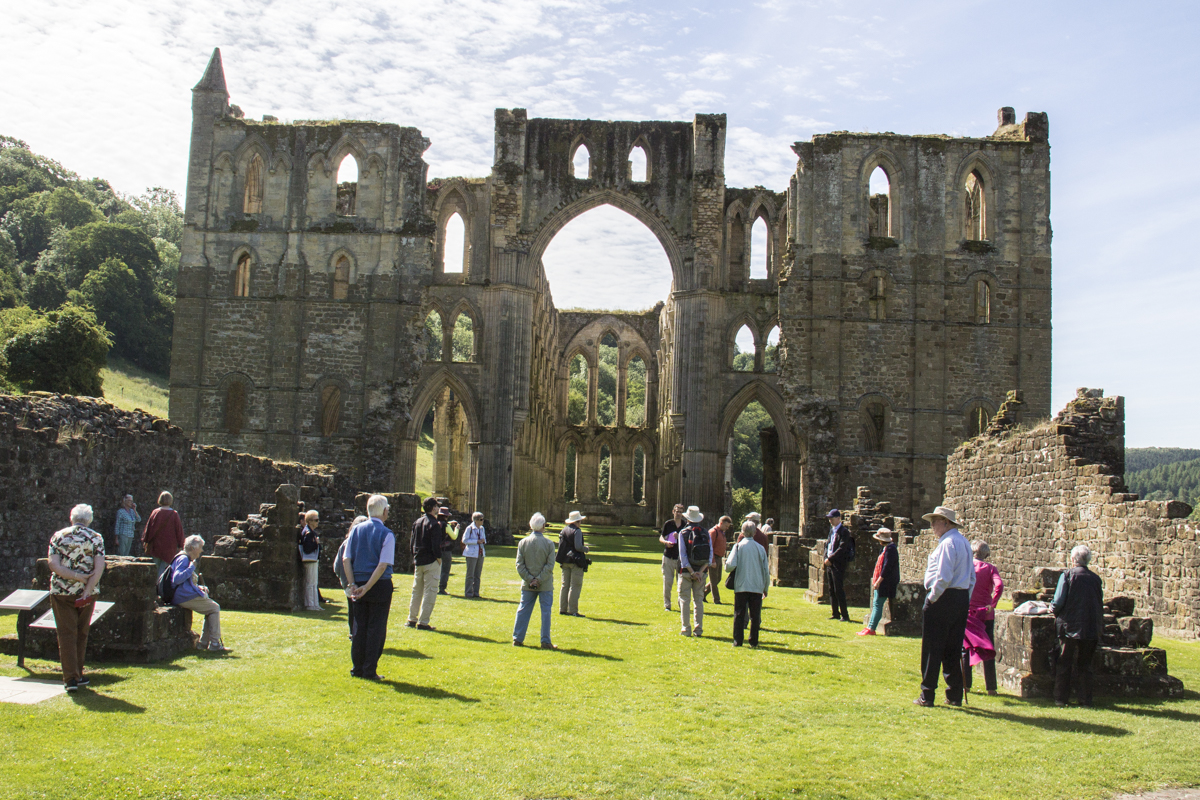 Jon had already told us the story of the Cistercians who had established Rievaulx as a protest against the traditional Benedictine style of monastery that had moved too far away from a faith that embraced love and community. Wandering through the ruins we learnt about the ritual washing of the monks’ feet by their abbot before entering the refectory and saw the niche in the wall that had been specially built for this. And we talked about the chapter house and the large infirmary. The former was the centre of the community where the monks and lay brothers would come together with the abbot. The latter was converted into an impressive residence for the abbot at the end of the fifteenth century when a large decrease in the number of monks in the abbey meant they no longer needed a large infirmary. 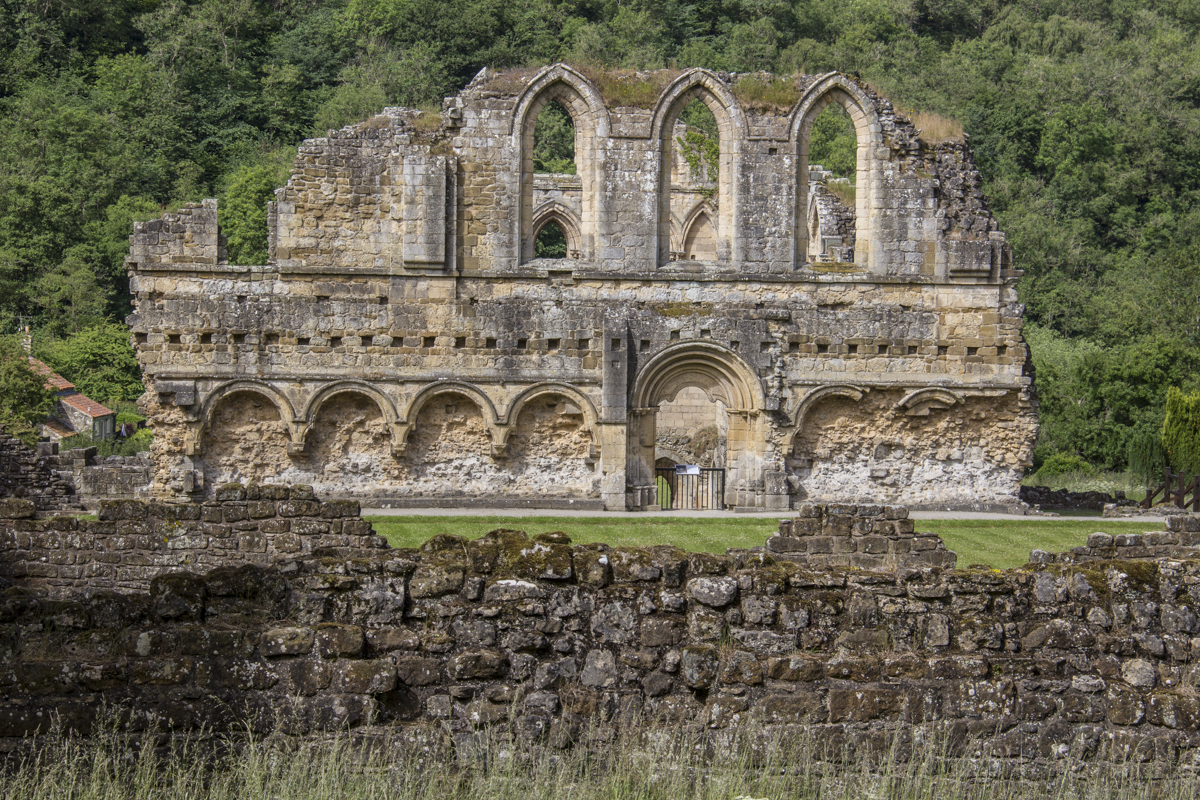 Durham Cathedral, perched on the summit of a hill above the centre of its town was our next destination. This cathedral was the only Romanesque building on our tour. It is one of the best examples throughout Europe. This Norman building, constructed between 1093 and 1133, was founded as a monastic cathedral and built to house the shrine of Saint Cuthbert. The cathedral is renowned for being the oldest surviving building with such a large stone vaulted ceiling. This is one of the places where the rib vault, which would transform medieval architecture, was invented. It also accounted for its early designation as a UNESCO World Heritage site which is one of the reasons it was listed by UNESCO as early as 1986. My favourite feature of this cathedral was the cloisters. 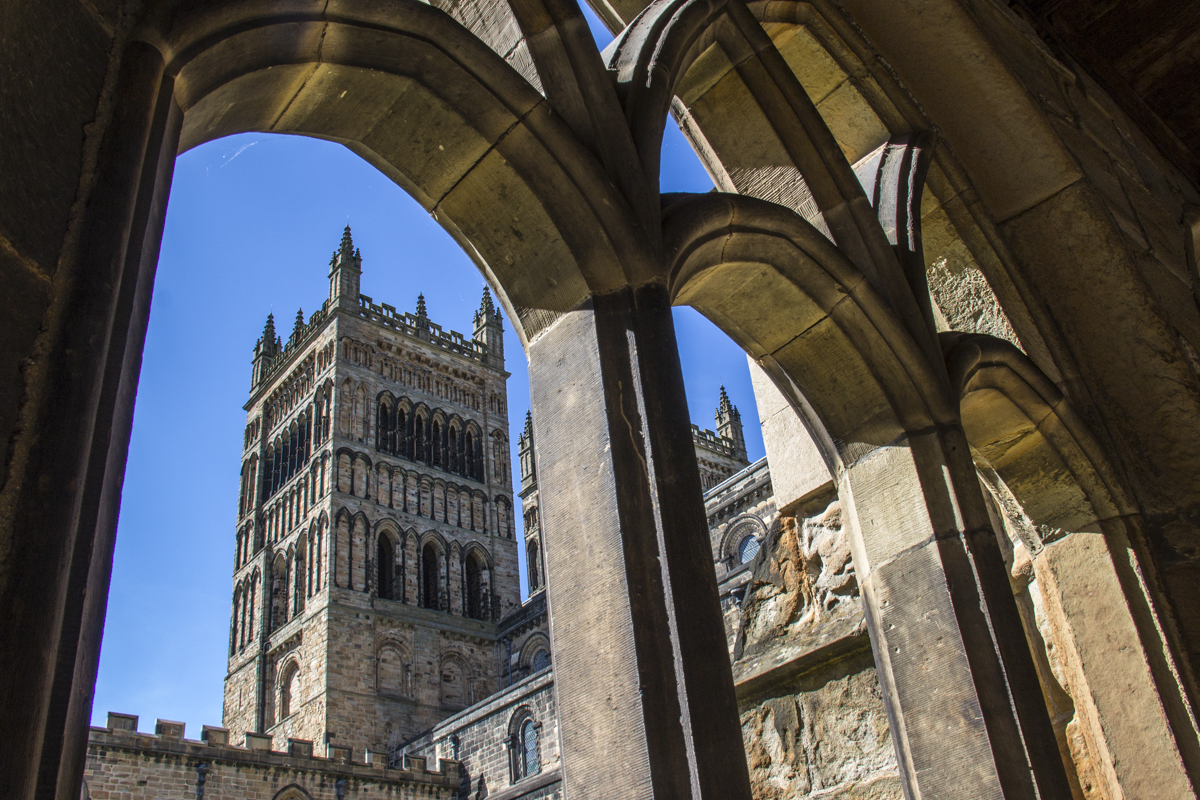 On our last evening we had dinner in a local restaurant and time to reflect on what we had seen. By then, thanks to Jon’s amazing ability to make everything we had seen make sense in the context of Medieval architecture and his passion for the subject I felt sufficiently confident to join in the conversation. An added bonus was Jon joining sitting at our table and filling in the gaps in our knowledge. Yes, I was a convert and relishing the thought of two more places to visit the following day.
We started at Ripon Cathedral beneath which lies a seventh-century crypt that pilgrims used to visit. This Gothic cathedral church dedicated to Saint Peter and Saint Wilfrid was originally a collegiate church that was built to support the huge diocese of York. It lost this status in the sixteenth century and was a parish church for four hundred years before being chosen as the cathedral for the first new diocese to be established in England in the post-Reformation period. Of particular interest inside this cathedral are its misericords. All our Medieval churches were built when England was Roman Catholic and there was no seating in the cathedrals as the services were processional. The clergy were also expected to remain standing throughout the services but to alleviate any suffering this caused little wooden shelves were built in the choir that could be dropped down to be used as a seat. The underside of these wooden shelves were elaborately carved As the wood carvers were often given a free rein these carvings could depict anything including Medieval folklore and were often humorous and profane. 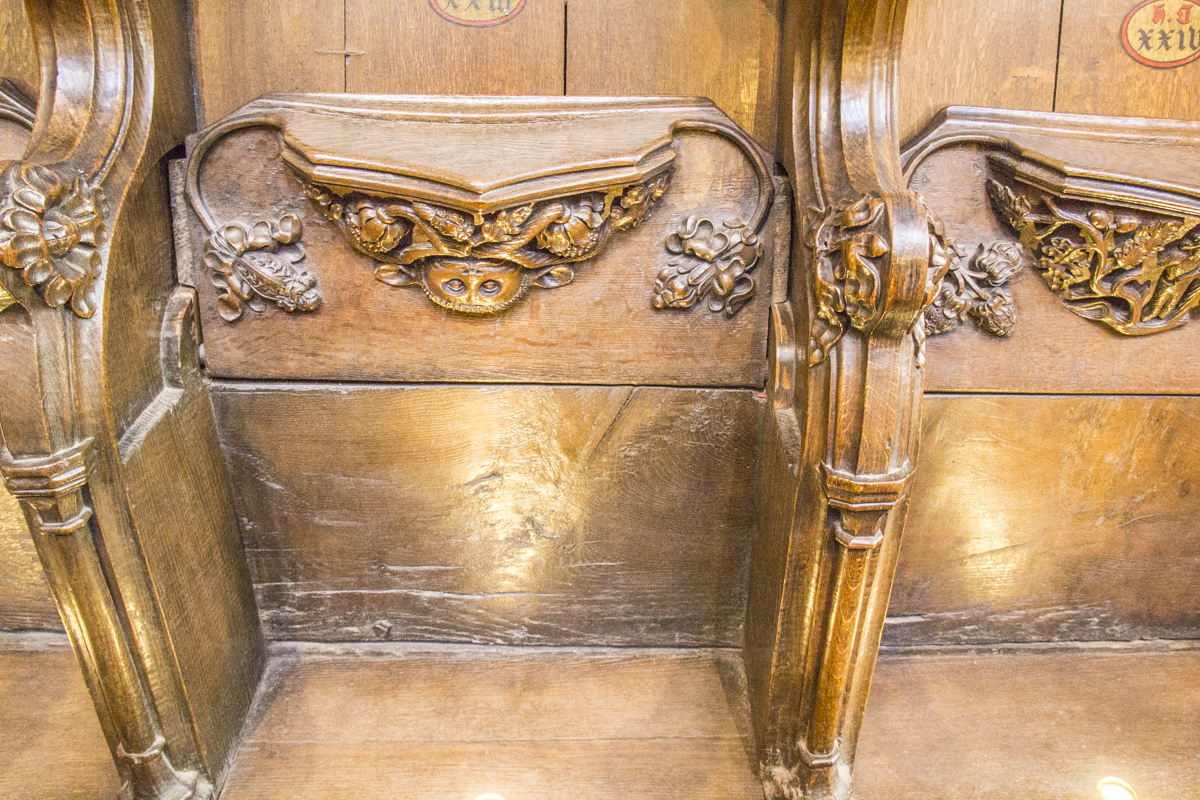 Fountains Abbey, the most impressive of the abandoned Cistercian monasteries, was the last place we visited. It lies in a valley surrounded by parkland so it is a pleasant walk down to the ruins. The layout of the abbey is consistent with all Cistercian abbeys although there were significantly more rooms for their four hundred lay brothers. It also includes a grange which was the name for the farms that provided produce for the abbeys. Lay brothers would work on the farms supervised by the monks. After our tour ended we had time to explore further and to have some lunch in the restaurant there before driving back to York, saying our farewells and heading for home. 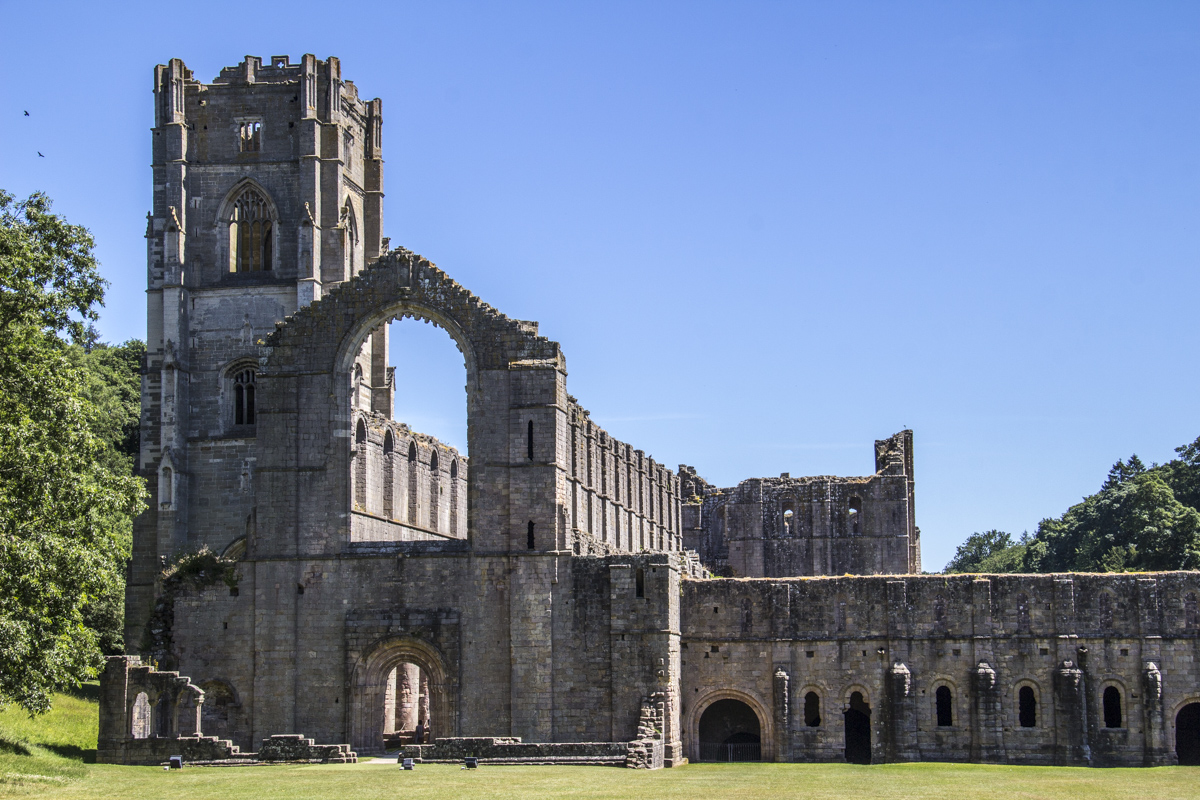 In conclusion I can honestly say this was one of my most enjoyable holidays. I loved the way our speaker, Jon Cannon was able to weave together the history and geology of the area with the history and architecture of the church to create a complete picture of Medieval architecture. This trip will be repeated by the Cultural Travel Company next year from 28 June to 01 July 2019.