The inhabitants of the small region of Abruzzo in Italy share a passion for their region and their home town and none more so than my guides in Giulianova in the province of Teramo. I met my first guide, Francesca, in front of the cathedral, Duomo di San Flaviano on the edge of the old medieval city. San Flaviano, the bishop of Constantinople, was chosen as the patron saint of the town when the boat carrying his remains to Constantinople ran aground on its coast and the citizens chose to honour him in recognition of this event. Originally called St Maria in Piazza, this unusual octagonal cathedral is meant to be the focal point of the urban centre and a visual reference from every point of the city. During the 1950s the original baroque interior was stripped out and it is now very simple inside. 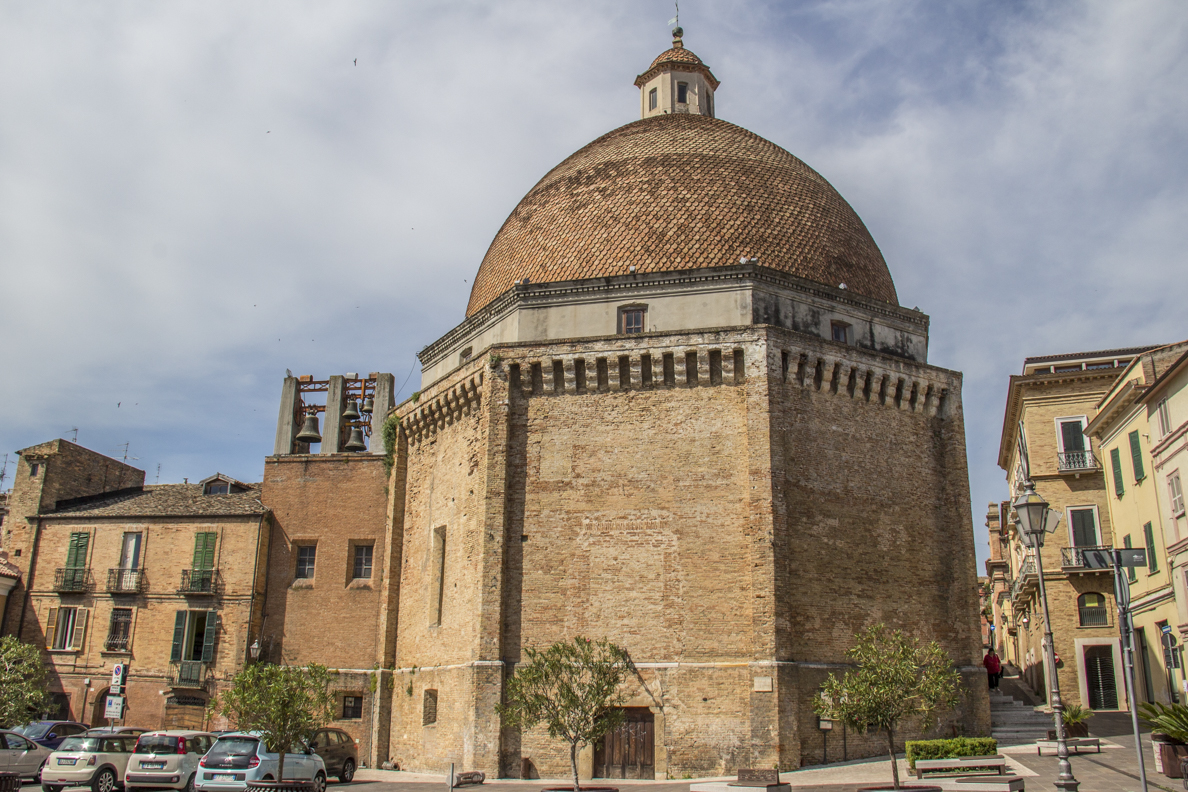 The cathedral was built in 1471when the original city on this site, Castrum di Flaviano, was replaced by a new city perched on a hill nearby. The architect of this new city was Duke Giulio Antonio Acquaviva who controlled the town at the time. He decided to take the ideal city as his model. This concept, was emerging as the Middle Ages moved towards the Rennaissance. He was following the example of other new Italian cities. These were ideal cities and were perfect in the sense that there had to be some value associated with every decision relating to the construction of any building. He named the new town Giulia after himself. Later Nova (new) was added to this name. 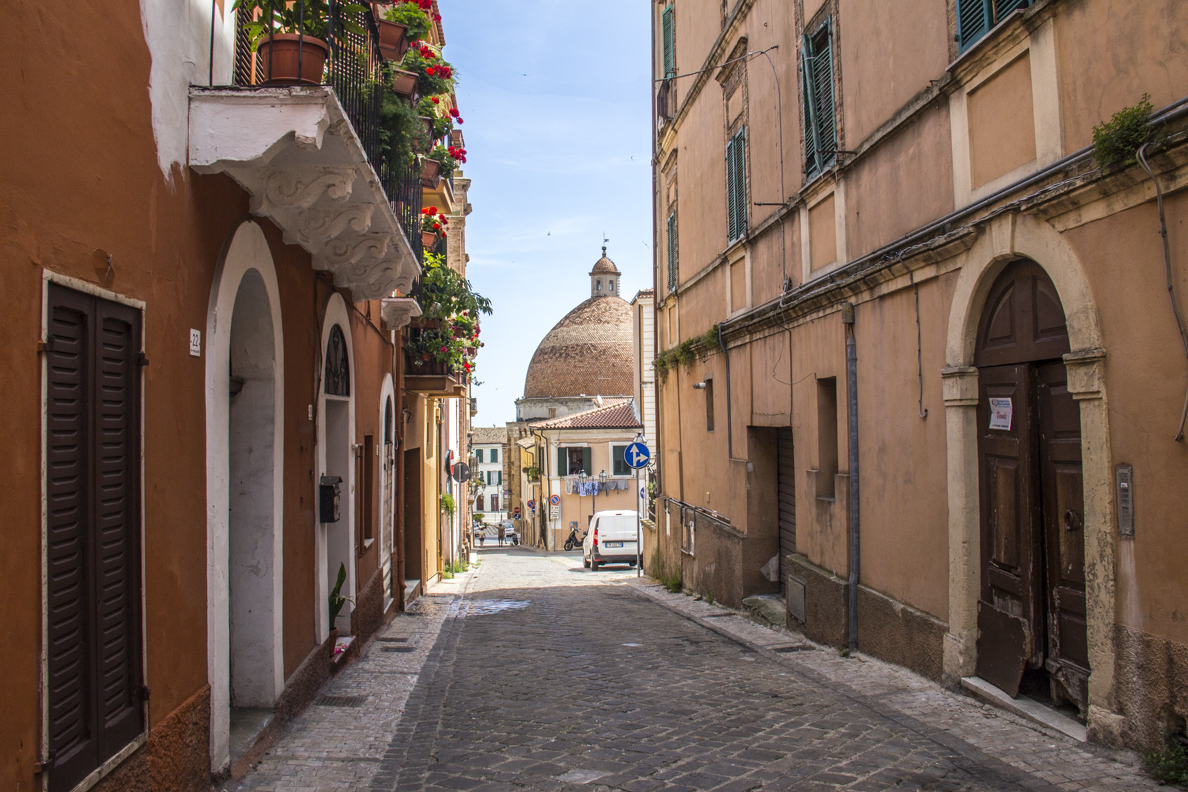 The main goal of Duke Acquaviva was to ensure the safety of his new town so he surrounded it with walls and eight towers. He employed optical illusions to make the town appear larger than it was. For example, Corso Garibaldi, the main street that crosses the town, is not straight but has a kink in front of the church. This makes the town appear larger and also meant that an enemy did not have a clear view from one end of the street to the other and could not see what was happening. He also surrounded these walls with a moat. As the city expanded beyond its walls the moat was filled in and replaced by a road, Via del Popolo which leads to the highest point of the city. This is the site of one of the original towers, the Round Tower otherwise known as Torrione Il Bianco. This tower had the best defensive system and was also designed as a safe house for the duke and his family in times of trouble. From this tower there is a great view of the city and one I was able to appreciate when we went inside the building to visit the small Museo Archeologico housed inside it. 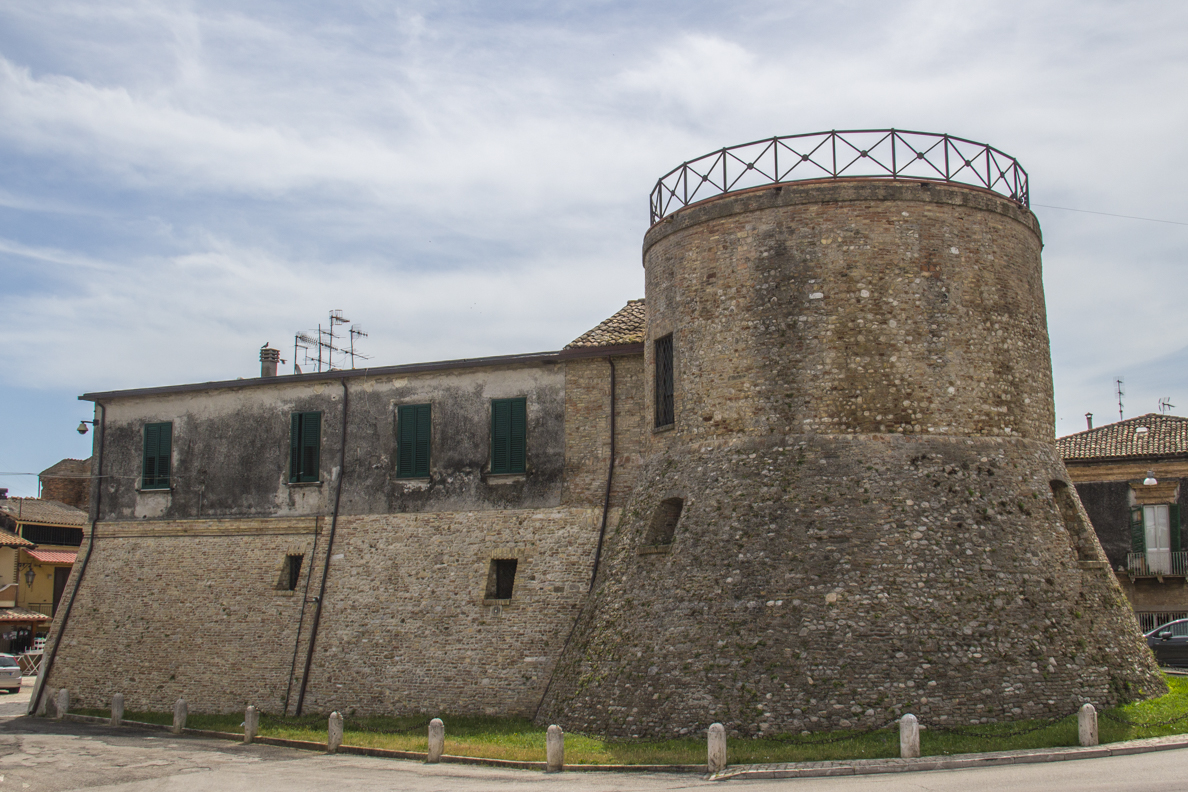 The buildings on the other side Via del Popolo date from the nineteenth century but there was no time to admire them as we made our way back down the hill to re-enter the medieval town. On our way we passed another one of the original towers – Porta Napoli. The first floor of this tower was filled in when the road was built but originally it was taller than Torrione Il Bianco but not so well defended. 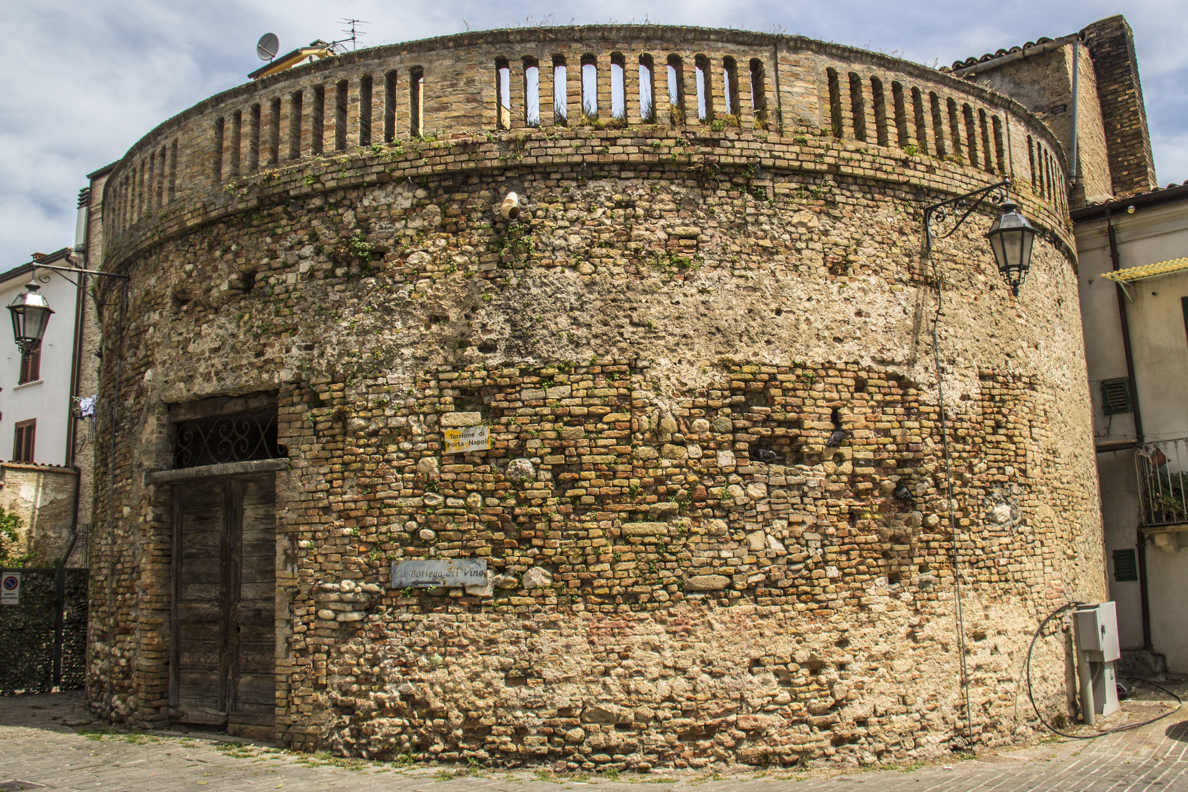 Giulianova has many churches. The pink church, Chiesa della Misericordia or Santa Maria della Misericordia, in Piazza Alighieri is probably the prettiest but is only used at Easter as it houses a Cristo Morto (Christ in death) statue which is venerated during this festival. Piazza Alighieri is also known as the Market Square and is the most popular square in the town as the Saturday fruit, flower and vegetable market is held here. The baroque church of San Antonio on Via Diaz has the most impressive interior but Francesca doubted that we would have the opportunity to appreciate it as it is not open all the time. However, as we approached it I saw two people unlock the door and enter. I persuaded Francesca to knock on the door but when her gentle tapping did not yield her results I resorted to rattling it. This produced the desired result and the door was opened and we were invited in to have a look. They even turned on the lights for us to appreciate the beauty of this lovely church. 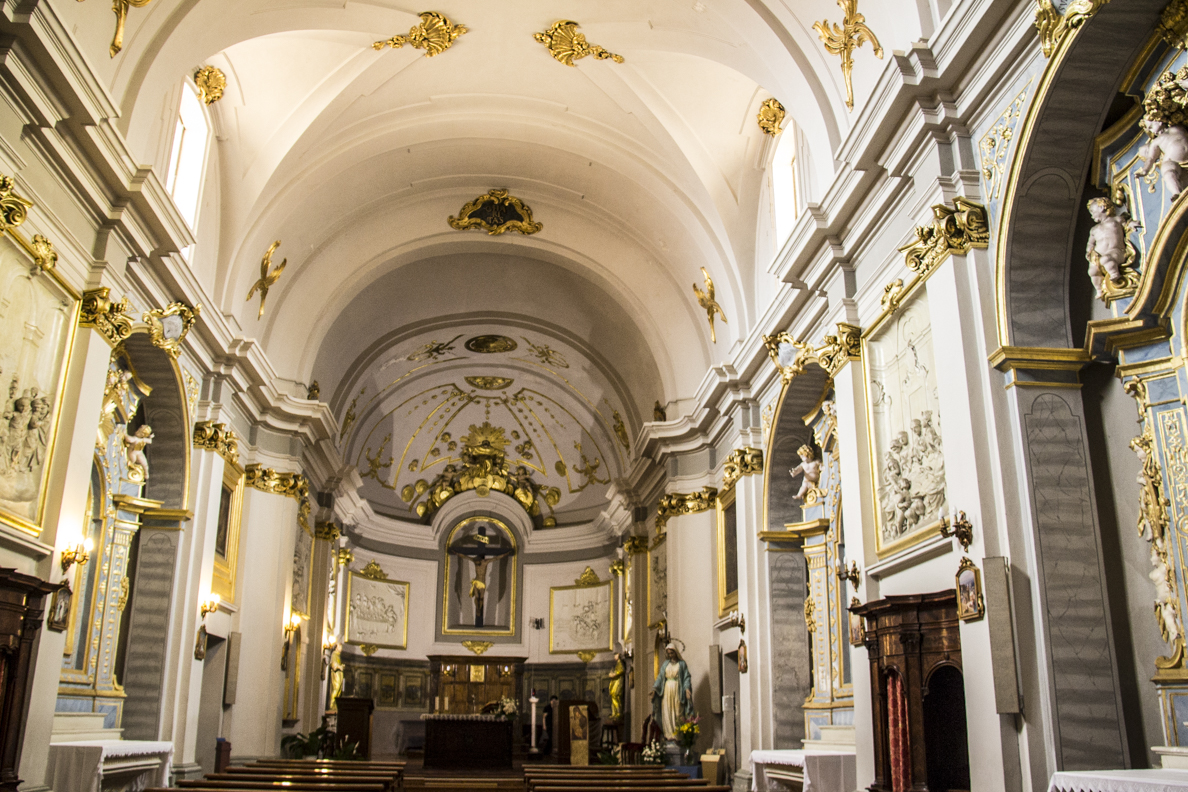 At one end of Corso Garibaldi is the house where the world famous Italian cellist Gaetano Braga once lived. The house is now a museum celebrating his life. He was so popular he was mentioned by Anton Chekov in his book the Black Monk. At the other end of this street is the Palazzo Bindi. This was the home of the Bindi family and is now the civic library. Vincenzo Bindi was a historian and a lover of the arts. During his lifetime he collected 2600 books and many paintings. On his death everything was given to the city to promote culture among the young. At the far end of Corso Garibaldi is Piazza della Libertà. In the centre of this square is a very large statue of Vittorio Emanuele II, the first king of Italy. This statue commemorates his visit to the town in 1860 on his way to a meeting with Garibaldi. The statue is the work of Raffaelo Pagliaccetti who was born in Giulianova and famous throughout Abruzzo. 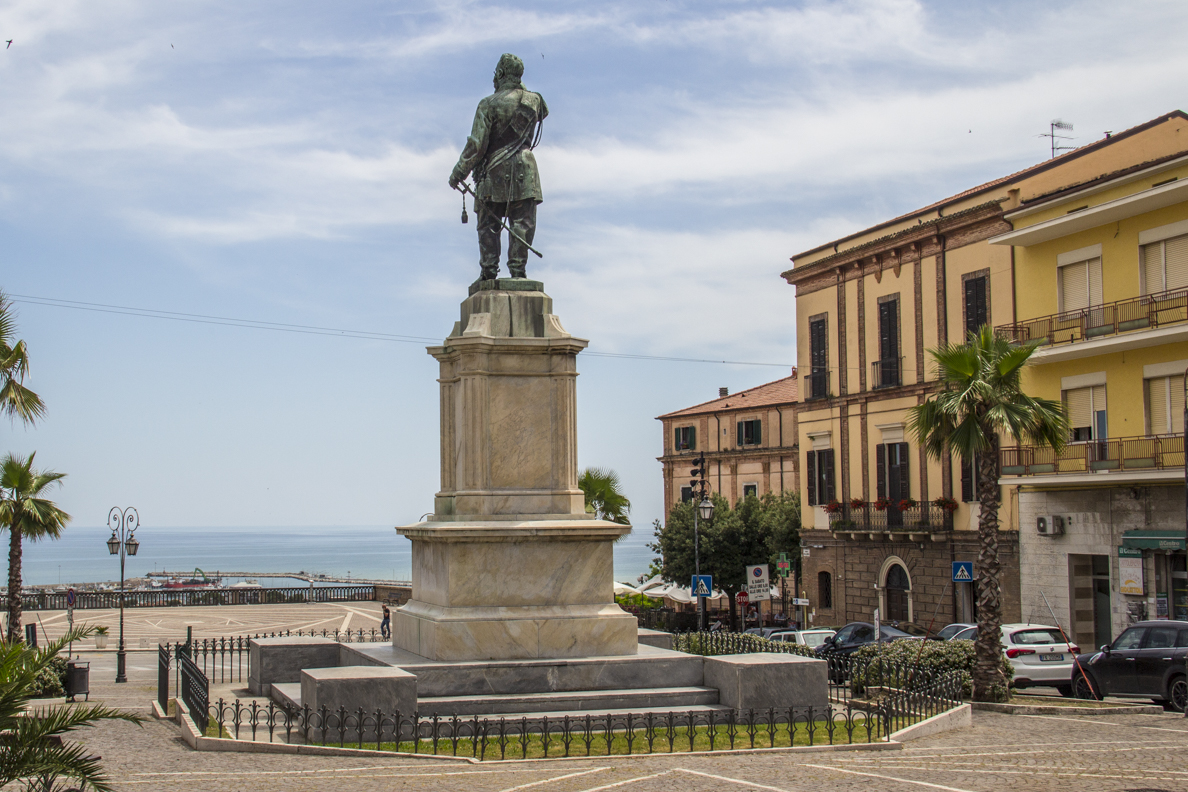 Pagliaccetti came from a poor family but was able to pursue his ambitions thanks to the Bartolomei family whose private chapel faces the statue. The enable him to study in Rome and then move on to Florence In the same square is the private chapel of the Bartolomei family and we went inside (Francesca had the keys). The Bartolomei family sponsored Pagliaccetti to study in Rome and from there the sculptor went to Florence where he was chosen to create the statue of Saint Andrew on the façade of the cathedral in Florence. There is a little exhibition in Giulianova displaying some of his plaster works and moulds. The Bartolomei family have also contributed a lot to the history of Giulianova by saving some of its churches and other similar acts. 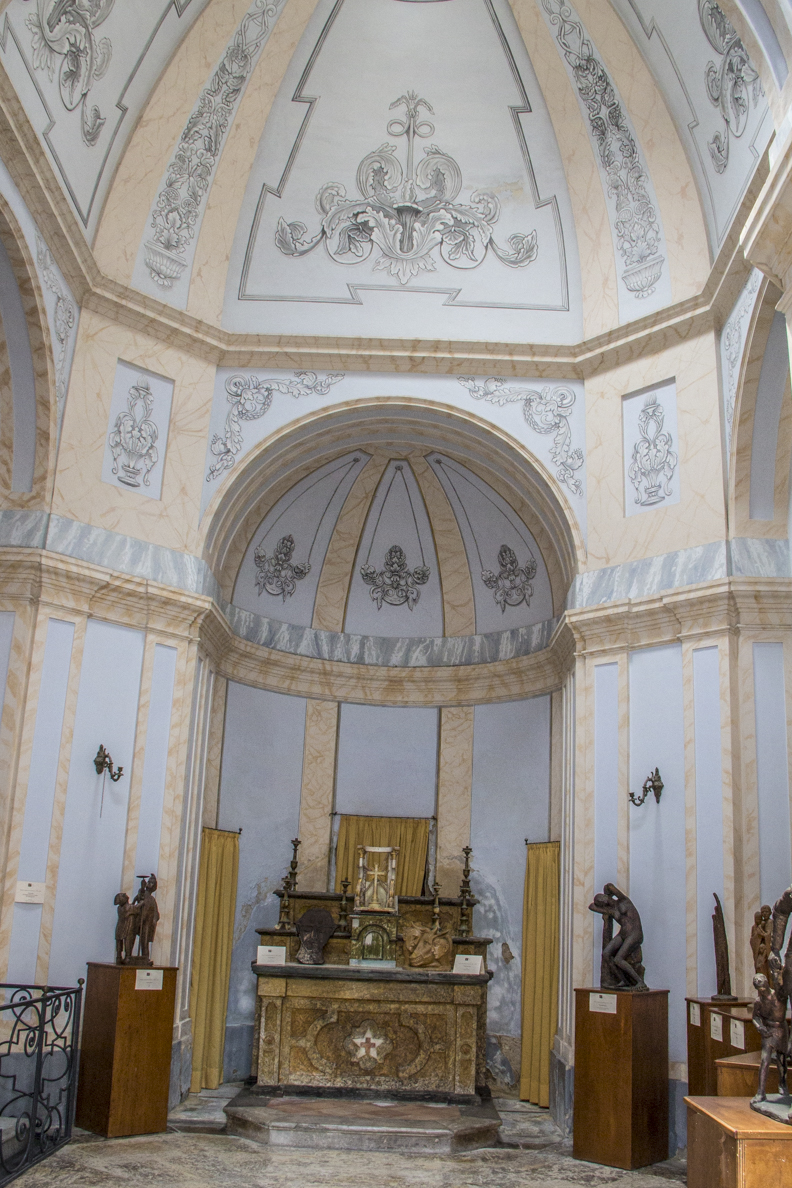 As we walked around the town I had noticed random paintings on the walls of various buildings. During the summer artists use the covers that access services such as gas and electricity as their canvases. They choose their own subjects and sometimes work at night. What a lovely way to brighten up a city. 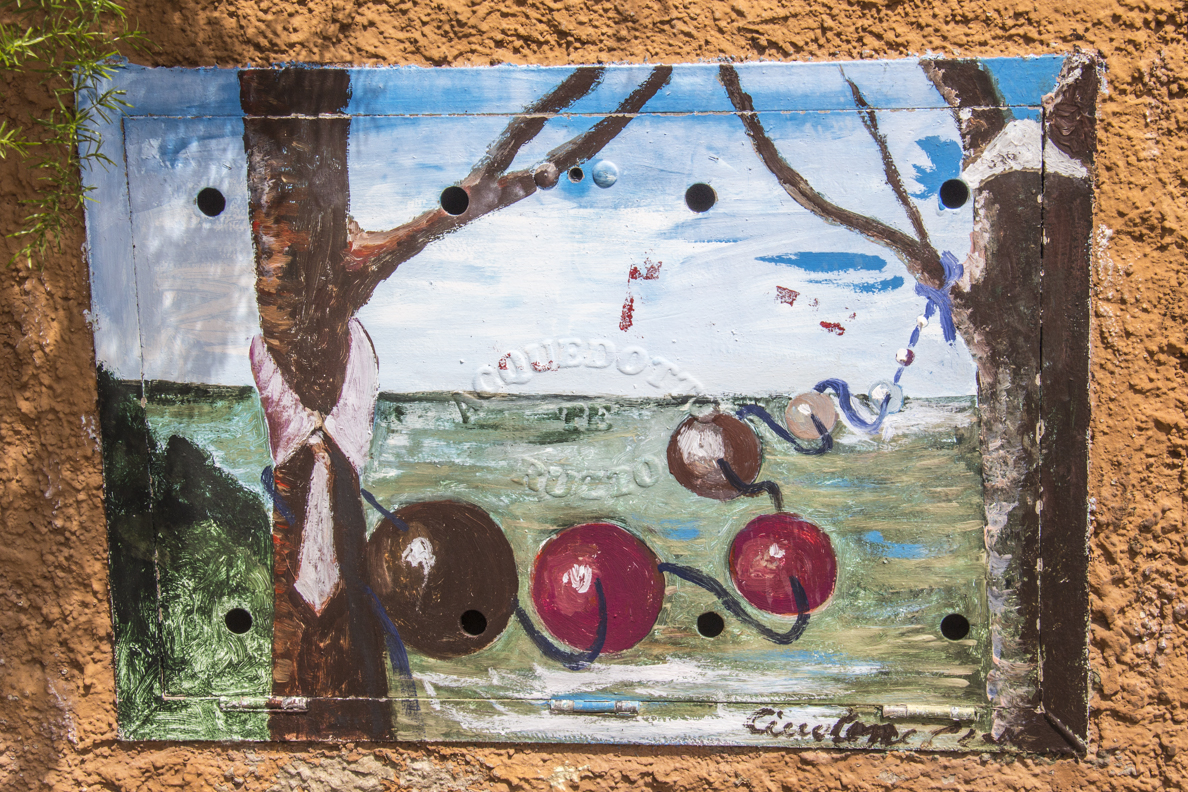 My second guide was Barbara who took me to her family’s business, La Nuova Chitarra to learn the art of making the traditional pasta, chitarrina teramana. This pasta is named after a device that is used to shape it which resembles the strings of a guitar. Antonella, Barbara’s mother, mixed two eggs with flour, kneaded the dough and then rolled it out thinly. She laid the dough on the strings of the chitarrina (guitar) and rolled it very gently. After a while the metal strings cut through the dough and the strips fell into the box below – encouraged by Antonella strumming the strings. The pasta is then hung on a rack to dry before cooking it. This pasta is square as opposed to normal spaghetti which is rounded – this helps the sauce to cling to the pasta. The pasta is usually served with meat balls and a tomato sauce. Barbara also demonstrated how they make other types of pasta using a machine and some of the different grains used to make them. We then all sat down to a delicious lunch of chitarrina teramana with very small veal meatballs in tomato sauce. 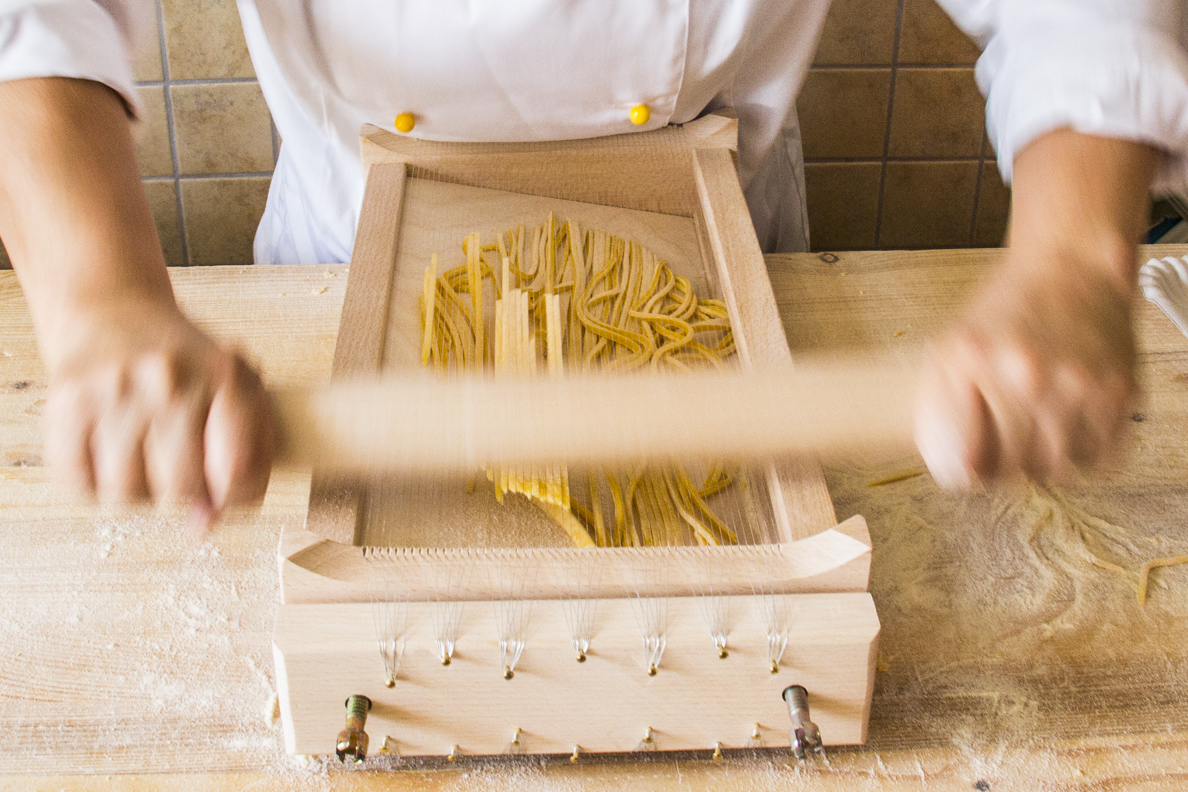 Fishing is a big industry in Giulianova and after we finished lunch Barbara took me to the port where we strolled along the long promenade to look at the traditional fishing huts. Most of the nets were hanging above the sea but one was in use. These large nets are lowered into the sea and then hauled back up to check the catch. On one side of the port I could see the famous sandy beaches of Abruzzo stretching as far as I could see. On the other side was a forests of masts indicating a marina full of pleasure boats. Beyond the marina was the commercial section of the port. 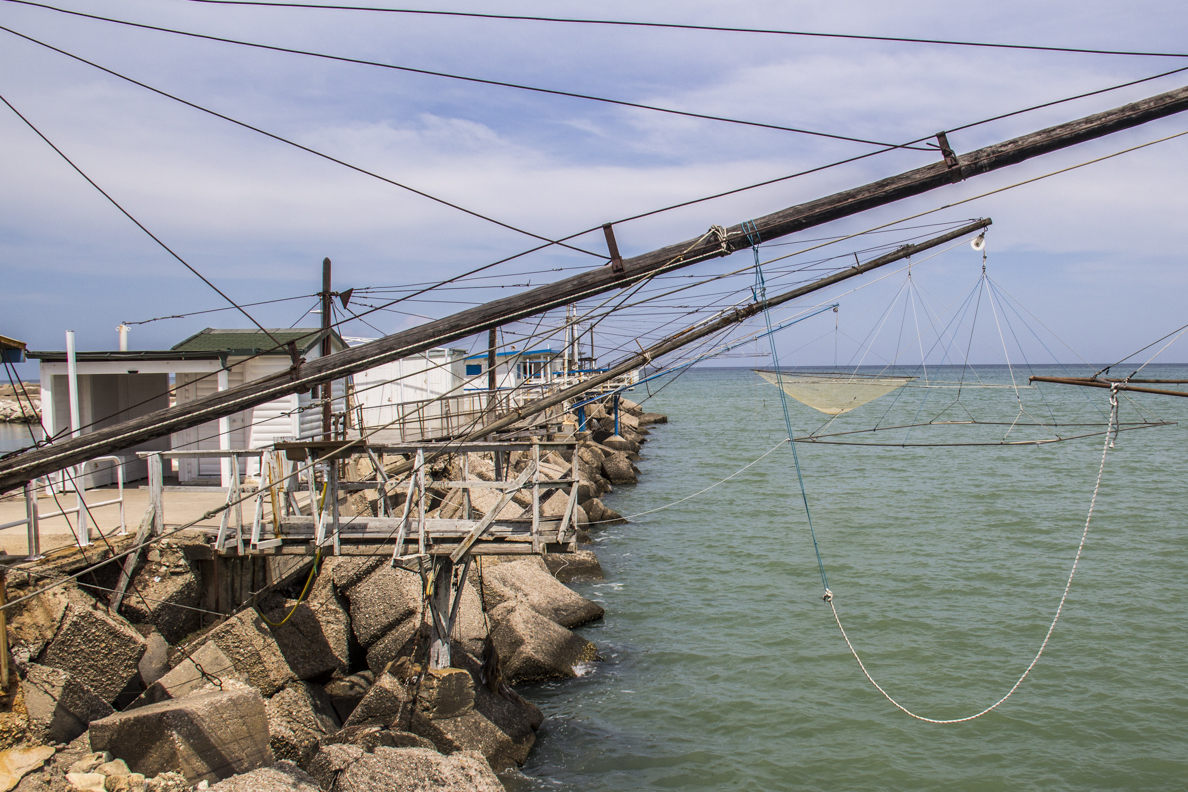 There was just time to visit the sanctuary of the Madonna della Splendore. The centre piece of this is a splendid church with cloisters of bright mosaics featuring a lot of gold leaf on either side of the main entrance. It is said that in 1550 the Virgin Mary appeared in a dream to a peasant named Bertoldino and indicated the source of a healing spring. Bertoldino found this spring and the sanctuary was created to allow visitors to drink the water and to bathe in it. Since then the water has been tested and deemed unsuitable for drinking but visitors can still bathe in the very ornate pool that contains this water. There is a monastery adjoining the church that was the home of Celestine fathers who looked after the sanctuary until the beginning of the 1800s. Following the suppression of the monasteries a small community of Capuchin monks were invited to establish a community in the old monastery and the sanctuary remains in their care. Between the years 1935 to 1955 a new church was built on the site of the original small church and renovations were carried out at the end of the twentieth century creating this beautiful place. A lovely way to end my day in Giulianova – enjoying the sanctuary and panoramic views of the city below me. 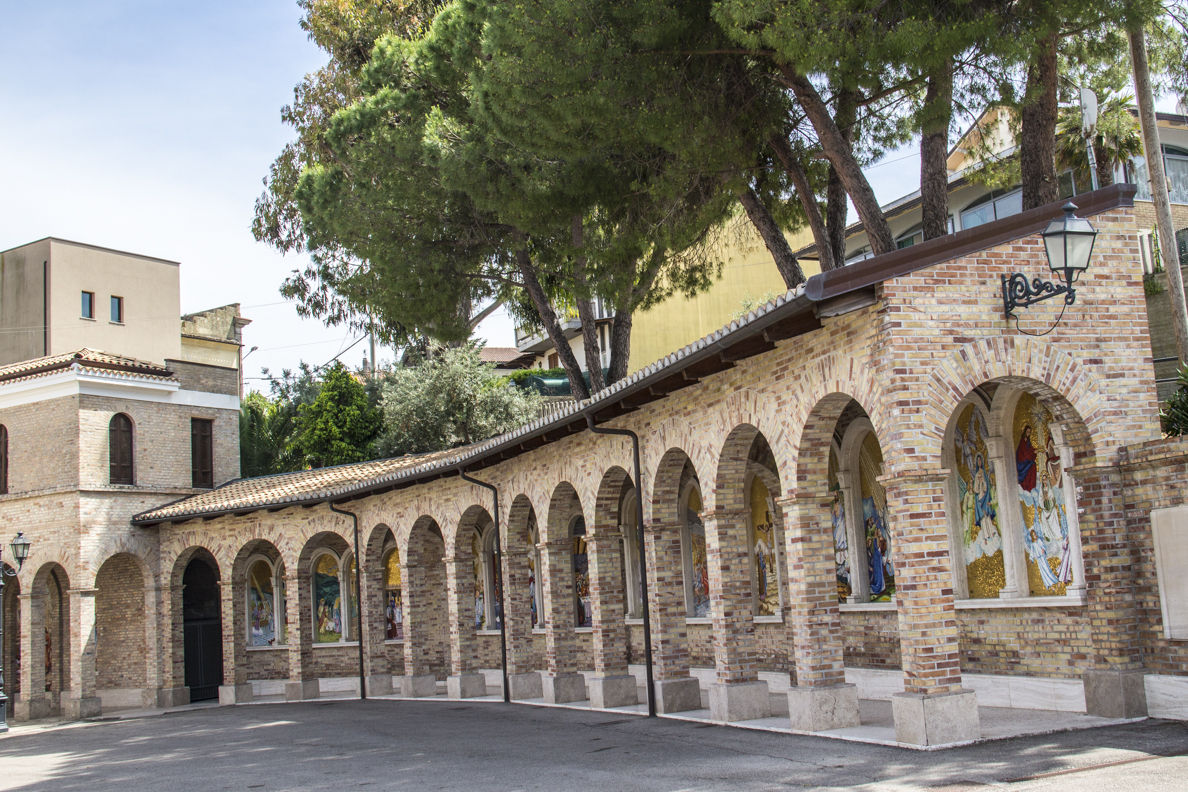 I flew from London, Heathrow, to Rome, Fiumicino with Alitalia. There are regular long-distance buses from Fiumicino to Abruzzo run by Gaspari which are easily booked online.

While I was in the province of Teramo I stayed at the four-star family run Hotel Villa Elena in Tortoreto Lido. This lovely hotel is well-placed for getting to the local beaches and for exploring the local area. I was very well looked after by the friendly staff and particularly impressed by the variety of food In their four restaurants.