The Wild and Wonderful St David’s Peninsula in Pembrokeshire, Wales 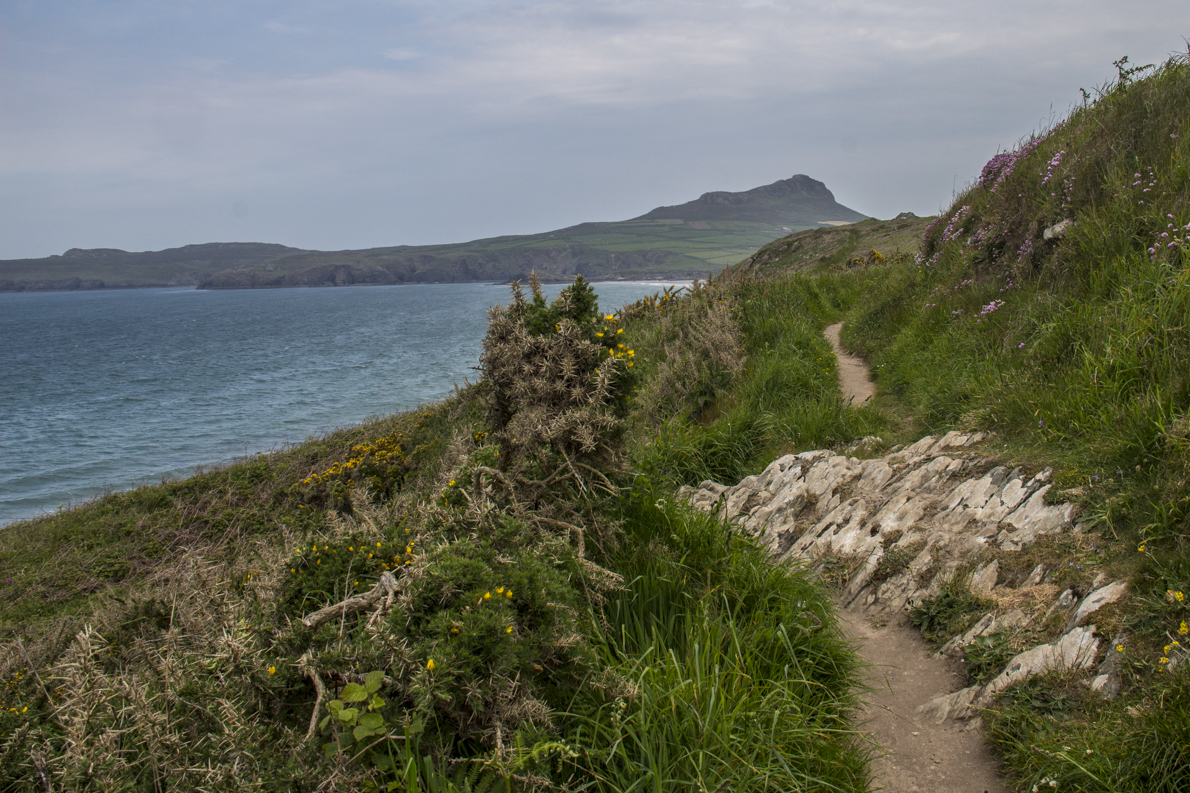 The Pembrokeshire Coast Path hugs the coastline for 186 miles passing through some magnificent scenery encompassing many different maritime landscapes including steep limestone cliffs, red sandstone bays, beaches and volcanic headlands. But one of its many attractions is the accessibility of short, easy and scenic sections of this path. On my last visit to Pembrokeshire I had walked along some of these sections. This time I was determined to tackle a longer stretch. While I was staying at the “Penrhiw Priory”: https://www.penrhiwhotel.com in St David’s City, I was just a fifteen-minute walk from Whitesands on the Path. It was an interesting walk down a quiet country lane. I had to stop and admire a tree festooned with small buoys like Christmas lights in the front garden of a house. When I arrived at Whitesands I was delighted to see that it lived up to its reputation – a vast expanse of golden sand lapped by the waves of a blue sea. The Coast Path crosses this beach but before I started my walk I had a break in the Beach Café where I enjoyed a very welcome coffee and a slice of homemade cake. 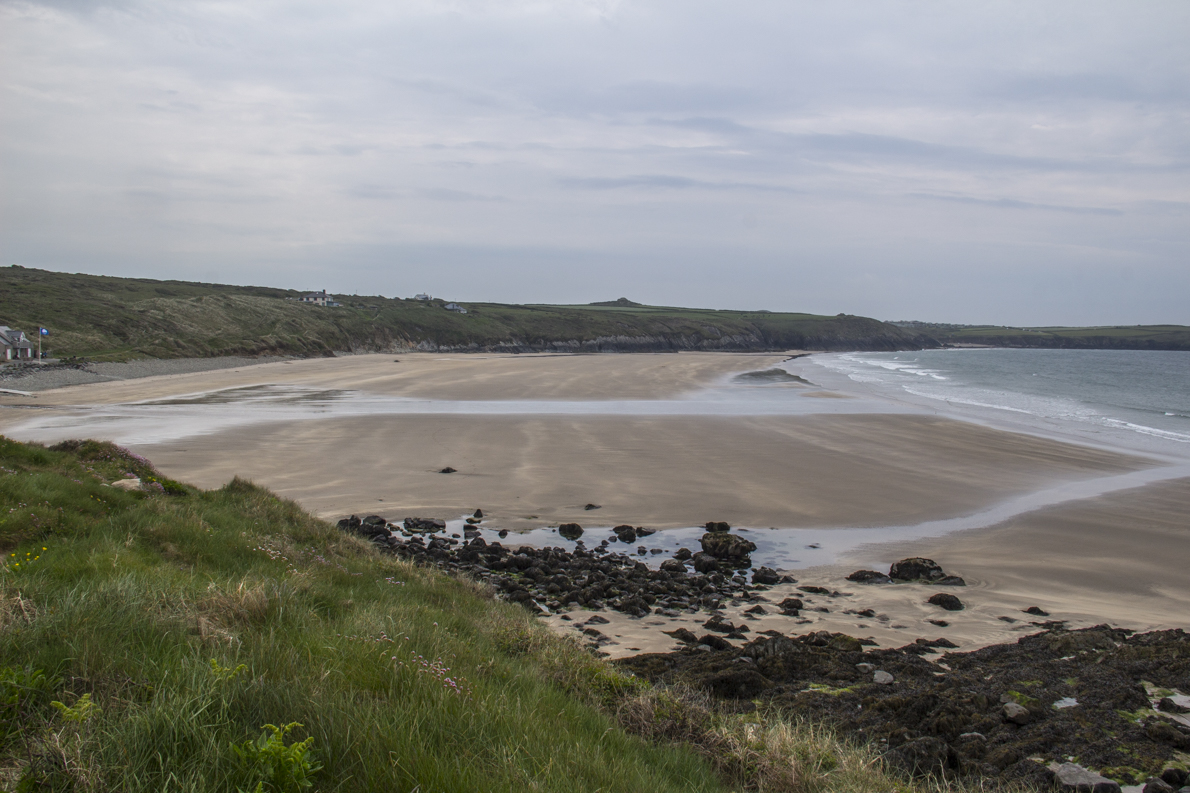 Back on the beach although I had intended to set off for St Justinian’s Bay but first I walked a short way in the opposite direction as I had seen a rocky promontory accessed by a narrow walkway from this path. It was a bit of a scramble to get across to it and very windy once I got there. However, it was worth it for the views of the beach. Back on the Coast Path I set off for St Justinian’s Bay. It was a lovely walk with meadows on one side of me and the sea, at the bottom of the steep limestone cliffs on the other side. A breeze played gently with my hair but occasionally whipped itself into a frenzy and tried to push me towards the edge. The whole area was sprinkled with patches of beautiful wild flowers. Most of the way I had good views of Ramsey Island not far off the shore. I passed some lovely rocky bays just before I got to St Justinian’s. 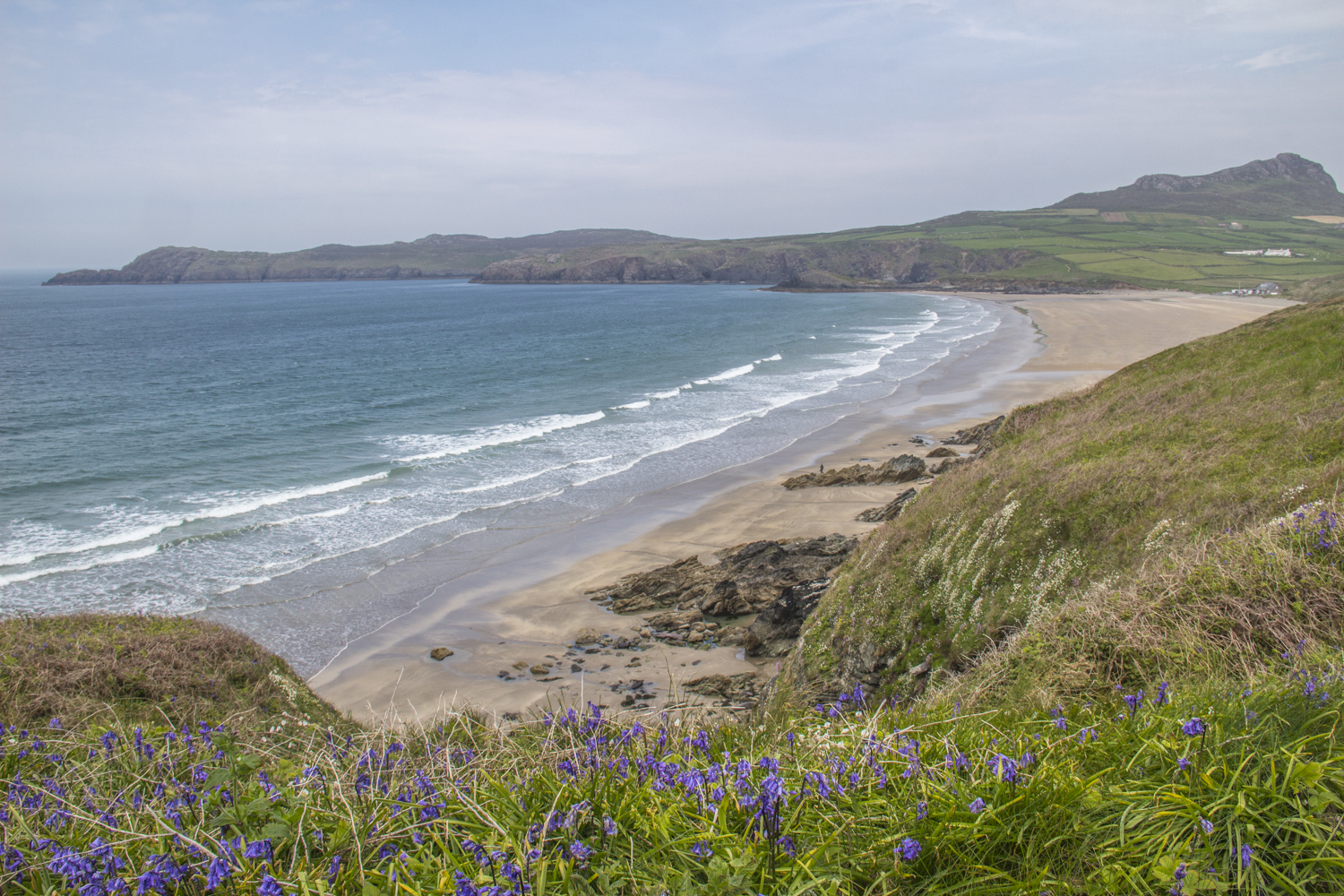 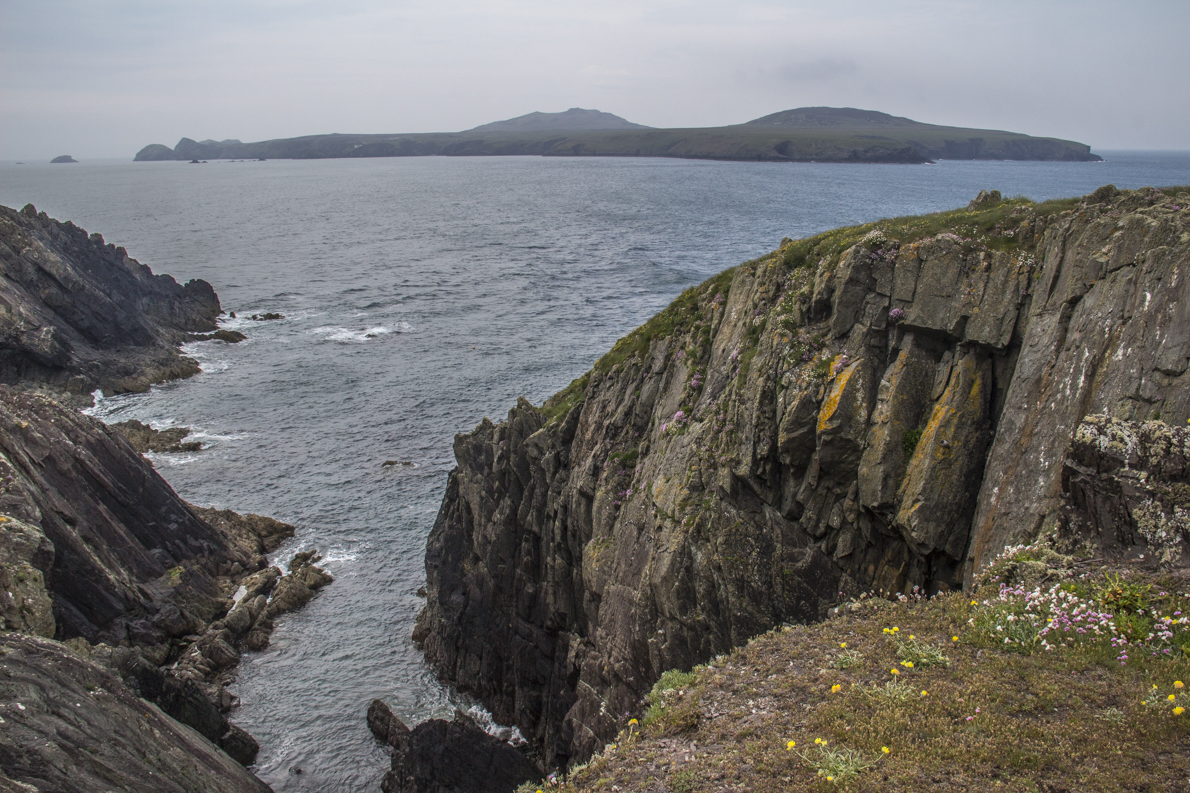 St Justinian’s is a small inlet not far from St David’s City and the site of three lifeboat stations. The very first one on this site is an old stone building at the top of a concrete jetty. This one is overshadowed by a second one that was built right in front of it at the request of the local inhabitants in 1869. This Grade II listed building was put up for sale by the owners the Royal National Lifeboat Institution in 2015 while the new lifeboat station was being built. Today, it remains unoccupied while discussions concerning its long-term future take place. The third and newest one was completed in October 2016 and houses two lifeboats, the Norah Wortley and a smaller inshore lifeboat. 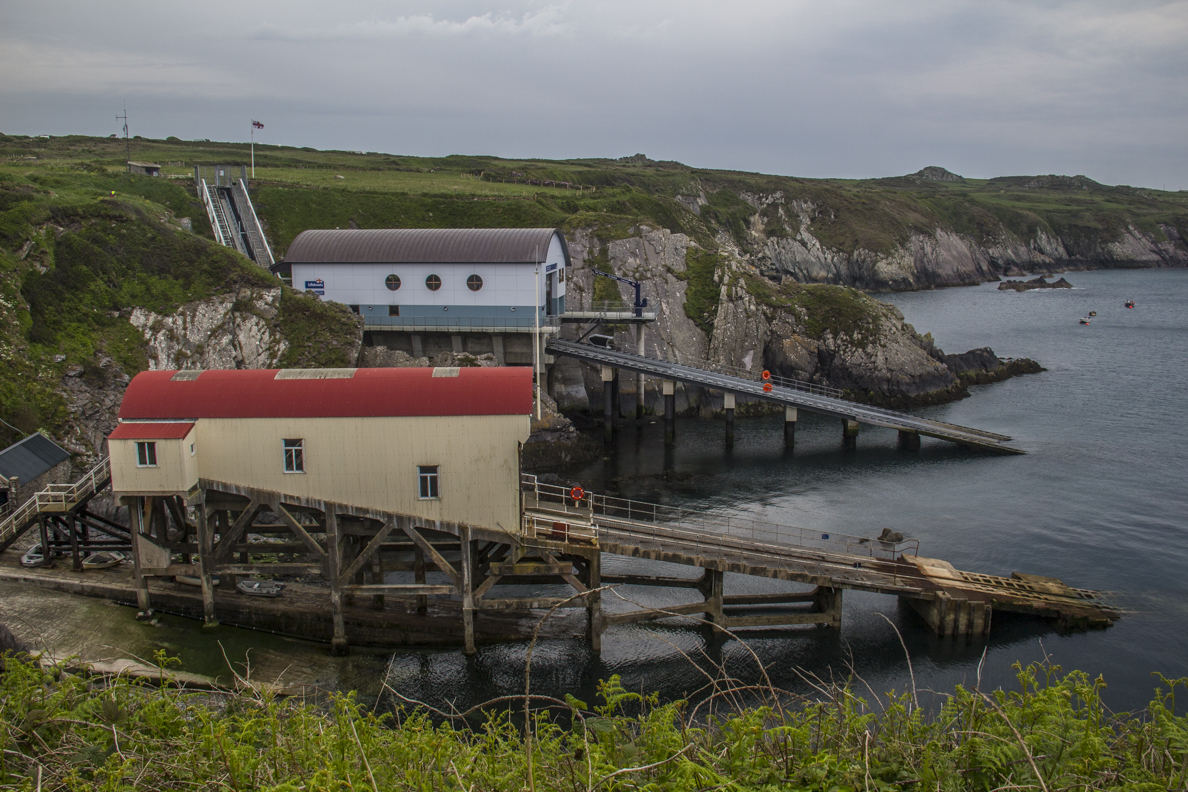 The ruins of a medieval chapel dedicated to St Justinian are just off the coast path as it winds around the bay. The ruins are what is left of a medieval chapel, according to legend, St Justinian’s remains were once buried. St Justinian was, reputedly, a Breton nobleman who lived on Ramsey Island as a hermit during the sixth-century. Saint David visited him on the island and was so impressed by his holiness that he appointed him as his confessor and Abbot of St David’s Cathedral St Justinian was not impressed by the behaviour of the monks here and returned to Ramsey Island where he established his own spiritual community supported by his more loyal monks. It is said that he was eventually beheaded by some disgruntled servants or monks who could not tolerate his strict regime. Apparently, he gathered up his head and walked across Ramsey Sound to the mainland where his body was buried in St Justinian’s Chapel. Today his remains are enshrined in St David’s Cathedral next to those of St David himself. 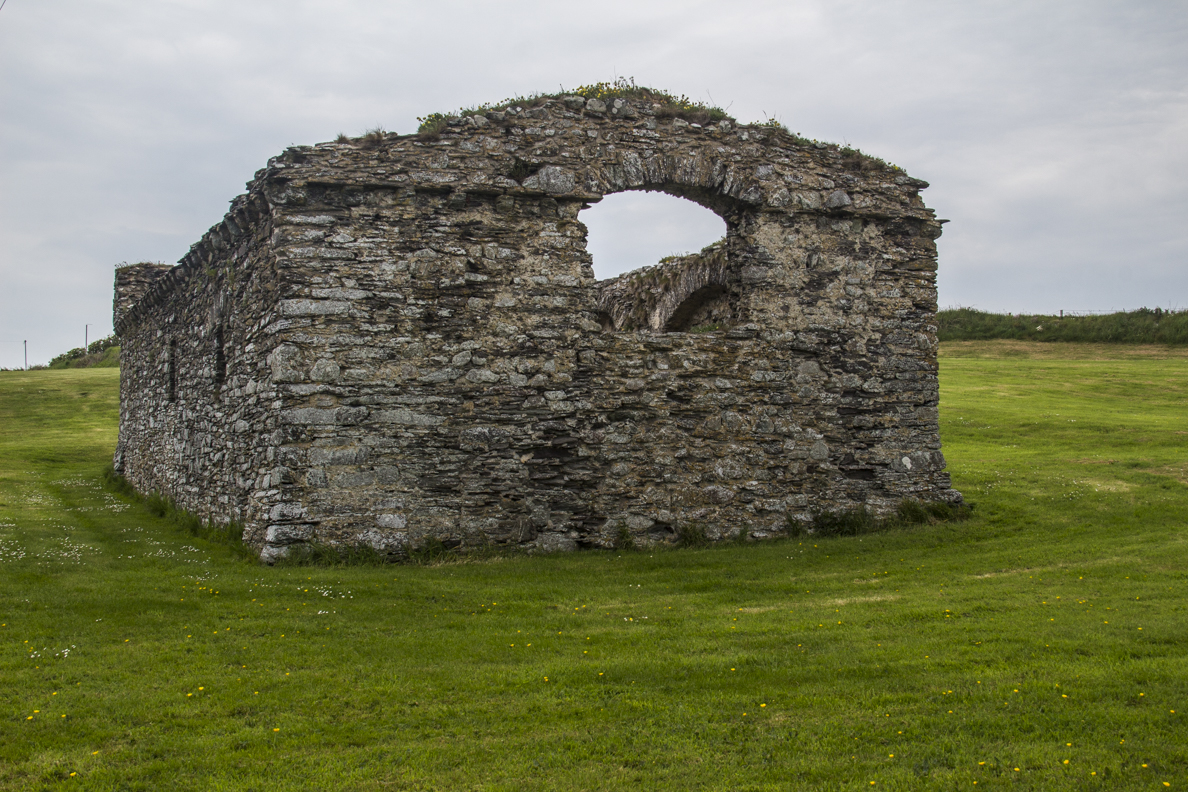 St Justinian’s Bay is also the departure point for boat trips to Ramsey Island. This small island is less than two miles long and is the fourth largest island in Wales. During the twelfth century, under the control of the bishops of St David’s, it was a place of pilgrimage. In the thirteenth century it was reported to be fertile supporting cows, sheep and goats and producing wheat, barley and oats. By the sixteenth century buildings on the island included a farmhouse, corn mill and lime kiln. Although the mill and kiln were operational until the beginning of the twentieth century the old farm building had fallen had become a ruin one hundred years earlier. In 1905 the island lost its ecclesiastical status when it was bought by private owners. Today just two people inhabit the island, the wardens, Lisa and Greg. They live in the Grade II listed farmhouse that was built in the early nineteenth century. During the summer, with the help of volunteers, they welcome visitors to the island. 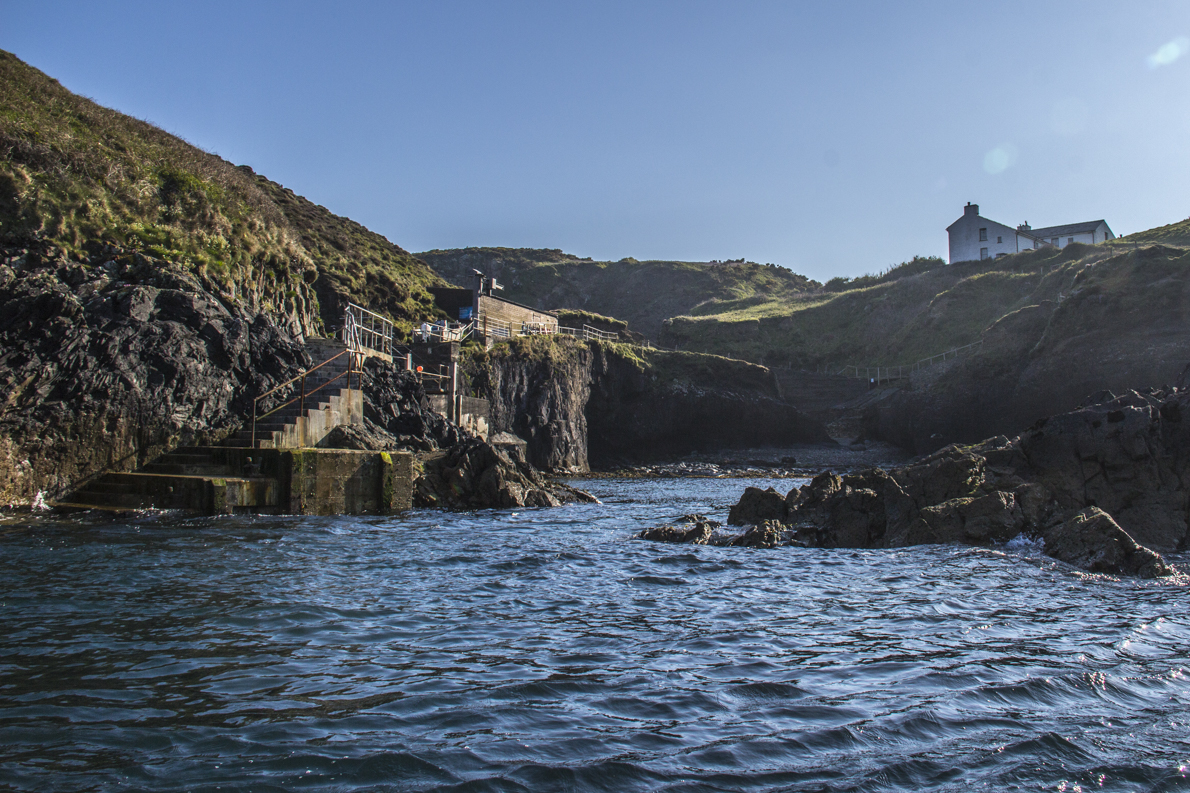 Ramsey Island is also famous for its wildlife and in particular the birds that inhabit and breed on its imposing cliff faces. It is a Special Protection Area and managed by the Royal Society for the Protection of Birds. Several companies in St David’s offer boat trips around the island and the previous day I had joined an early evening trip with Falcon Boats. It was a great experience as Ffion, our skipper and Nia and Mick, her crew, were both knowledgeable and passionate about the island. We learnt about the geology of the island as we bobbed on the water close to the its rocky shores. 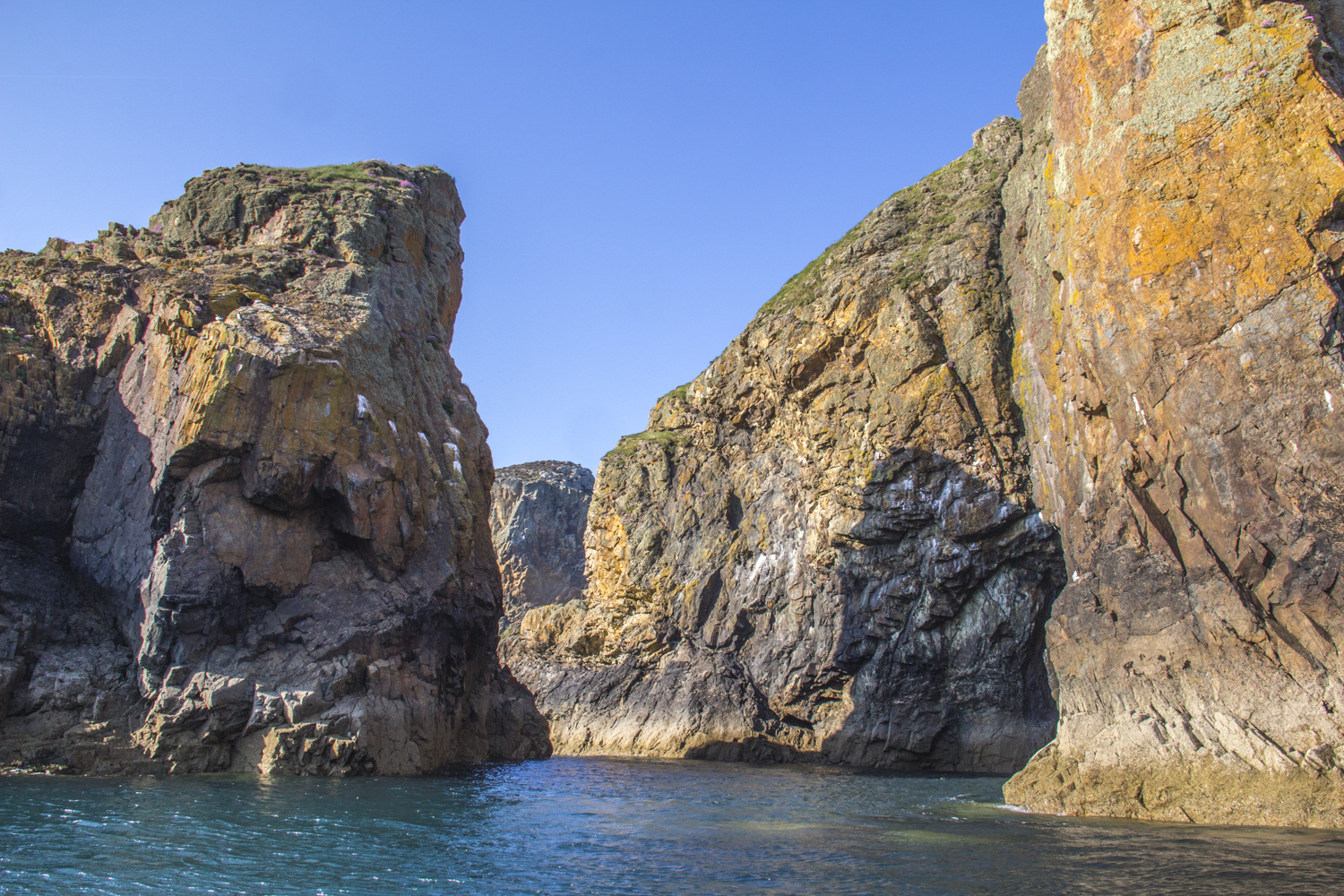 During our circuit of the island we had good sightings of seals basking on the rocks in the little coves. Colonies of guillemots and razorbills perched on the cliffs above us. The guillemots spend most of their lives at sea and when they are ready, before they can even fly, the youngsters will launch themselves off the top of the cliff and plummet into the sea. Between the islands of North Bishop and Ramsey we were lucky enough to see puffins bobbing in the sea. As we headed back to shore we stopped to watch the Manx shearwaters coming home to roost. Graceful in the sky but clumsy on land these cunning birds leave their return to land until the evening when they are less likely to meet predators. It was a splendid and memorable sight. 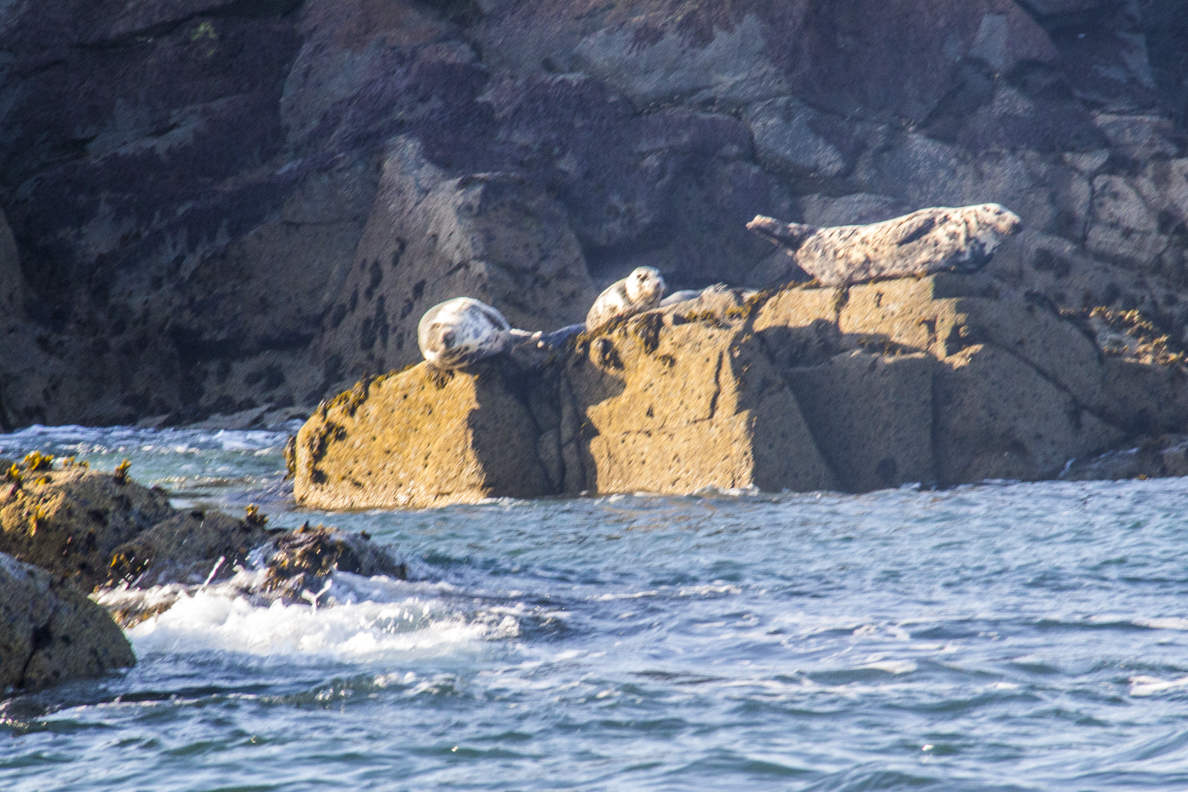 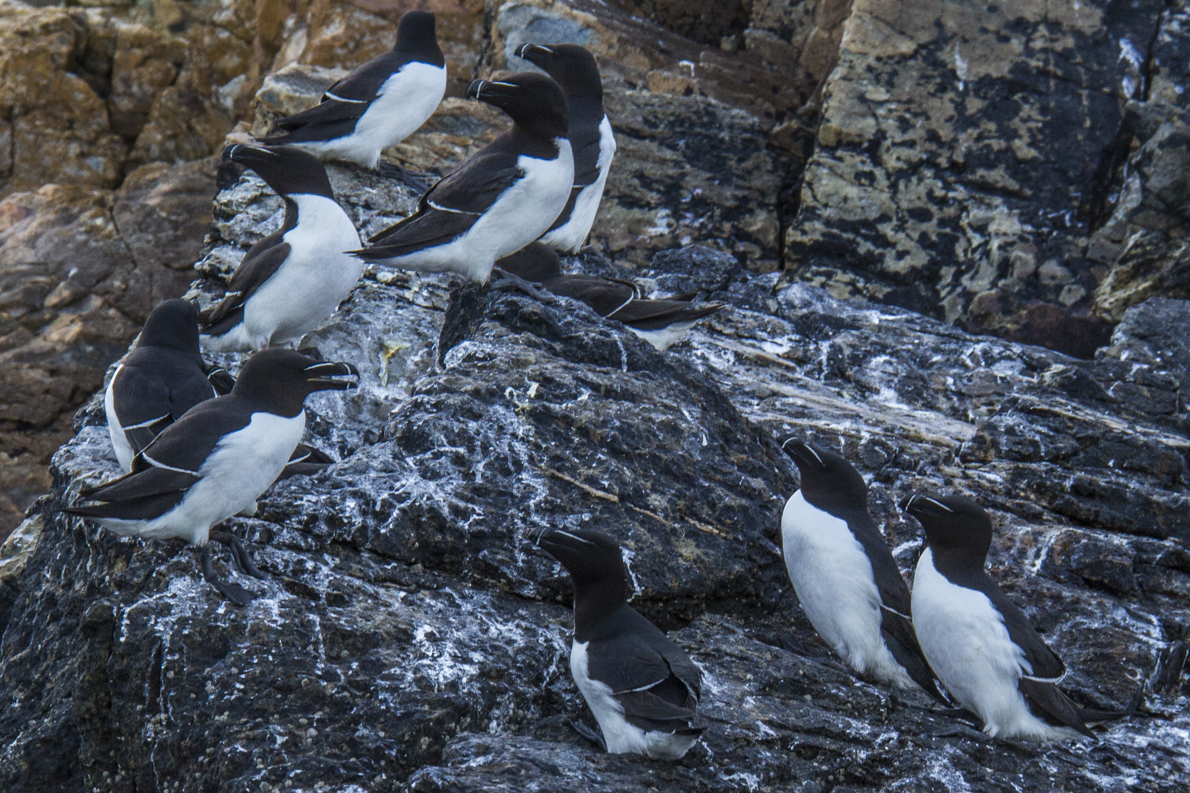 From St Justinian’s I used the Celtic Coast bus to get to the harbour at Porthclais. I had intended to walk there but it was very overcast and threatening rain and as a bus was due it seemed the sensible thing to do. That decision proved to be very worthwhile as the driver was happy to answer my questions about different places and soon the passengers around me were joining in the conversation. I left the bus at Porthclais full of local knowledge and set off to explore the little harbour. Porthclais harbour was built during the twelfth century as a trading port for the city of St David’s but it is believed the old harbour wall was built by the Romans. It was very busy with ships importing and exporting goods for the coastal communities on the peninsula. The main products passing through this port were timber, grain, limestone and coal. The latter two would have been used to fuel the limestone kilns and nearby gas works. The ruins of the limestone kilns can be seen on either side of the inlet behind the harbour wall. The lime they produced was probably used for agriculture to neutralise acidic soil and improve crop growth. All that remains of the gas works is the former pump room which is now used as a kiosk for refreshments. During the summer months this little inlet is a very popular place for launching canoes and catching crabs. The Coast Path passes along each side of the harbour and I took advantage of this to explore the harbour. The harbour has been owned by the National Trust since 1940. 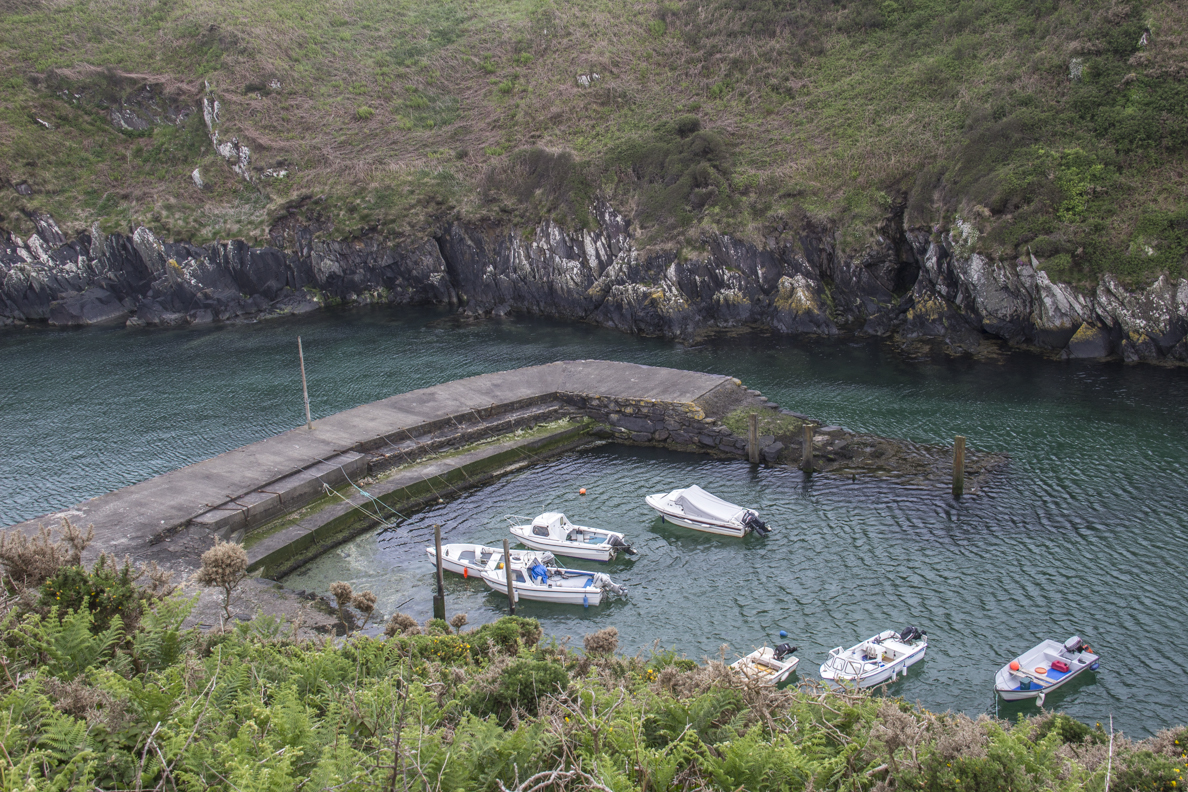 After exploring the harbour, intending to walk back into St David’s from there I decided I would indulge in my second coffee and homemade cake break of the day. As I was sitting outside the rain that had been threatening all afternoon arrived and quickly cooled my coffee down – just in time to take advantage of the offer a lift back into town. I was soon back in my hotel making myself a very welcome cup of tea and reflecting on a great day exploring St David’s beautiful peninsula. 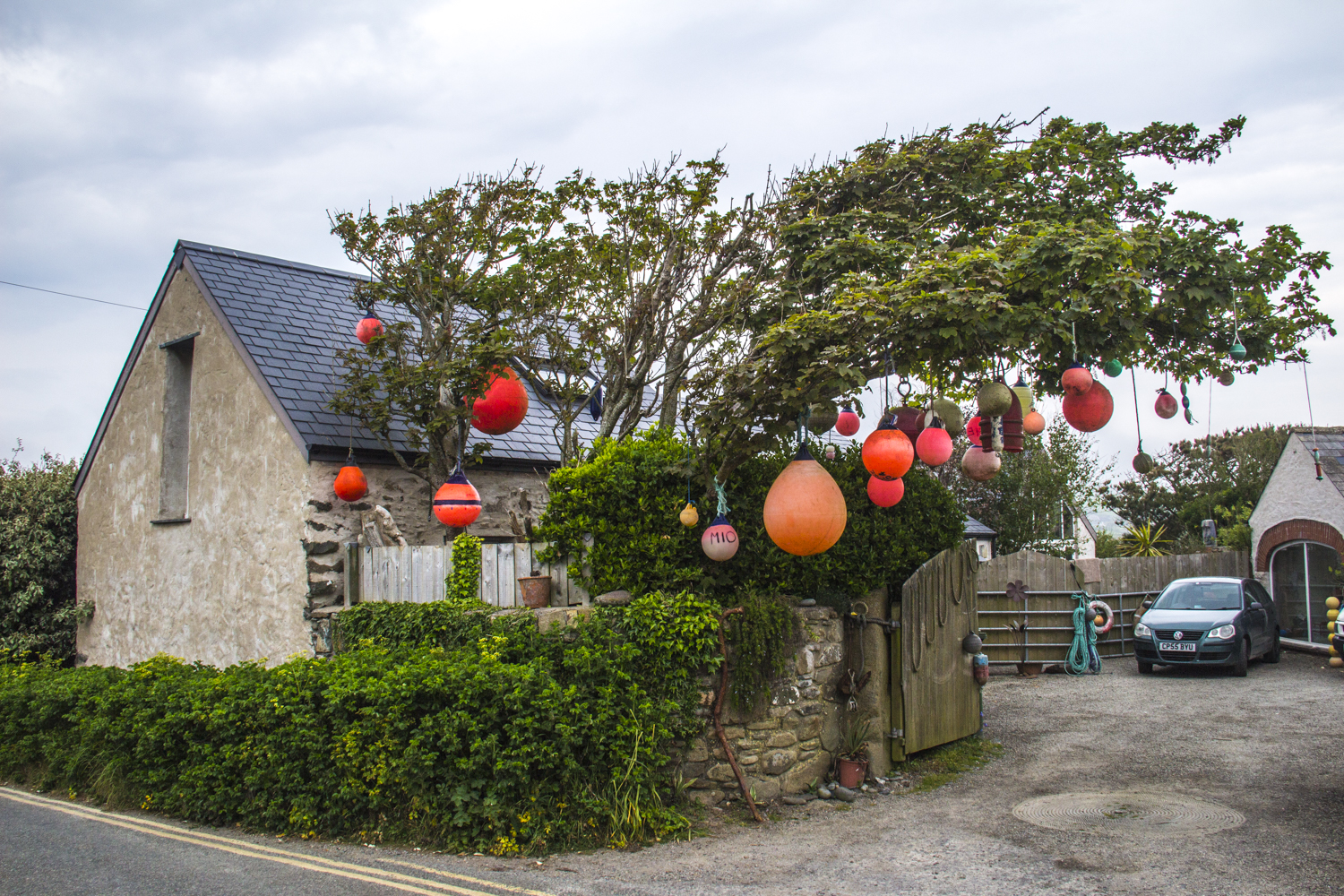