A Day Trip to Sandoy One of the Faroe Islands

Sandoy, one of the Faroe Islands is relatively flat and very green. It was named after its large beach and sandy soil. It is the only island with dunes – black basalt sand dunes. Birds congregate in large numbers on the cliff face of its headland and tourists seeking an adrenalin rush can replicate the hunting techniques of the islanders by rappelling an activity similar to abseiling. I travelled there on the ferry from Gamlarætt Ferry Port on Streymoy Island to the port of Skopun. This pretty little port has an unusual claim to fame as it was once the proud owner of the biggest post box in the world. The blue post box is the size of a house and sometimes used by fishermen as a landmark. It was built by two fishermen hoping to achieve some fame for their village but it is no longer recognised by the Guinness Book of Records as the largest in the world. 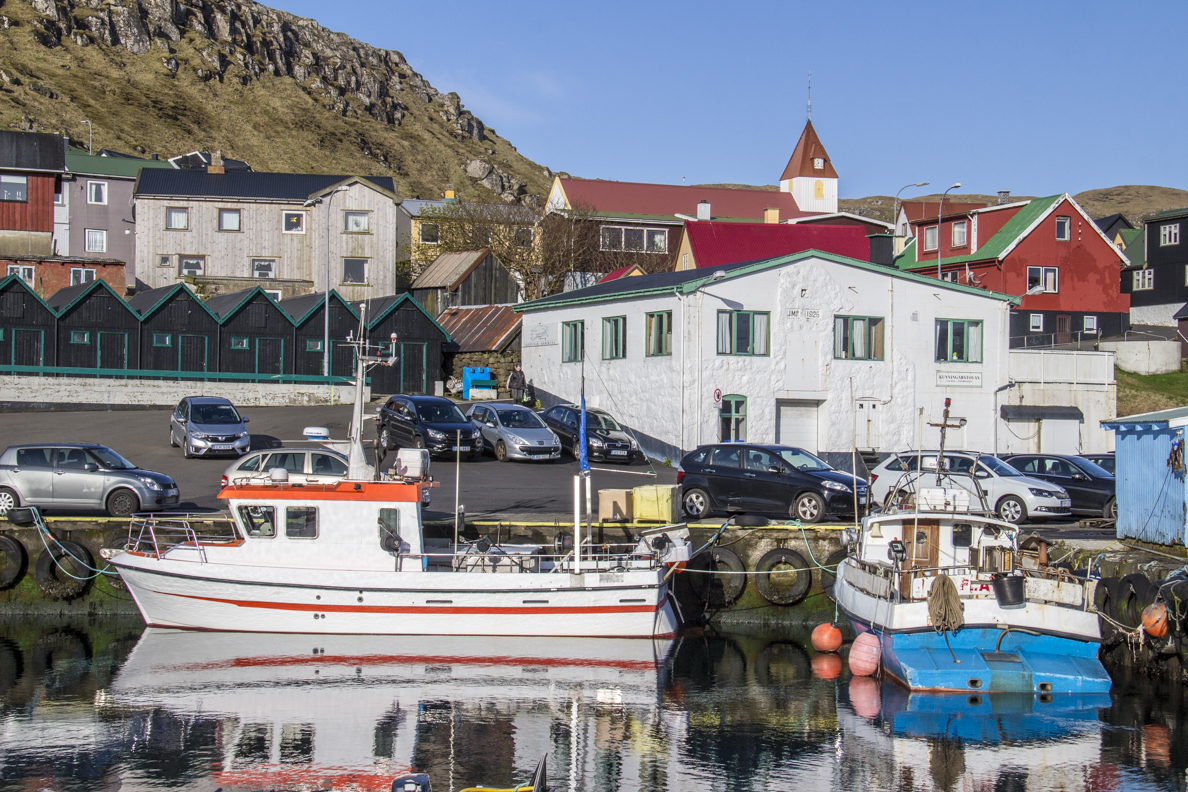 Hanna, our guide, met us in Skopun and we set off in a small minibus to explore the island. We drove through a valley, one of the most fertile areas in the Faroe Islands, towards Sandur. The road we took was the first road to be completed in the Faroe Islands in 1917. It passes by two small lakes, Gróthúsvatn and Sandsvatn Lake. The latter is the largest lake on the island of Sandoy and the third largest in the Faroe Islands. 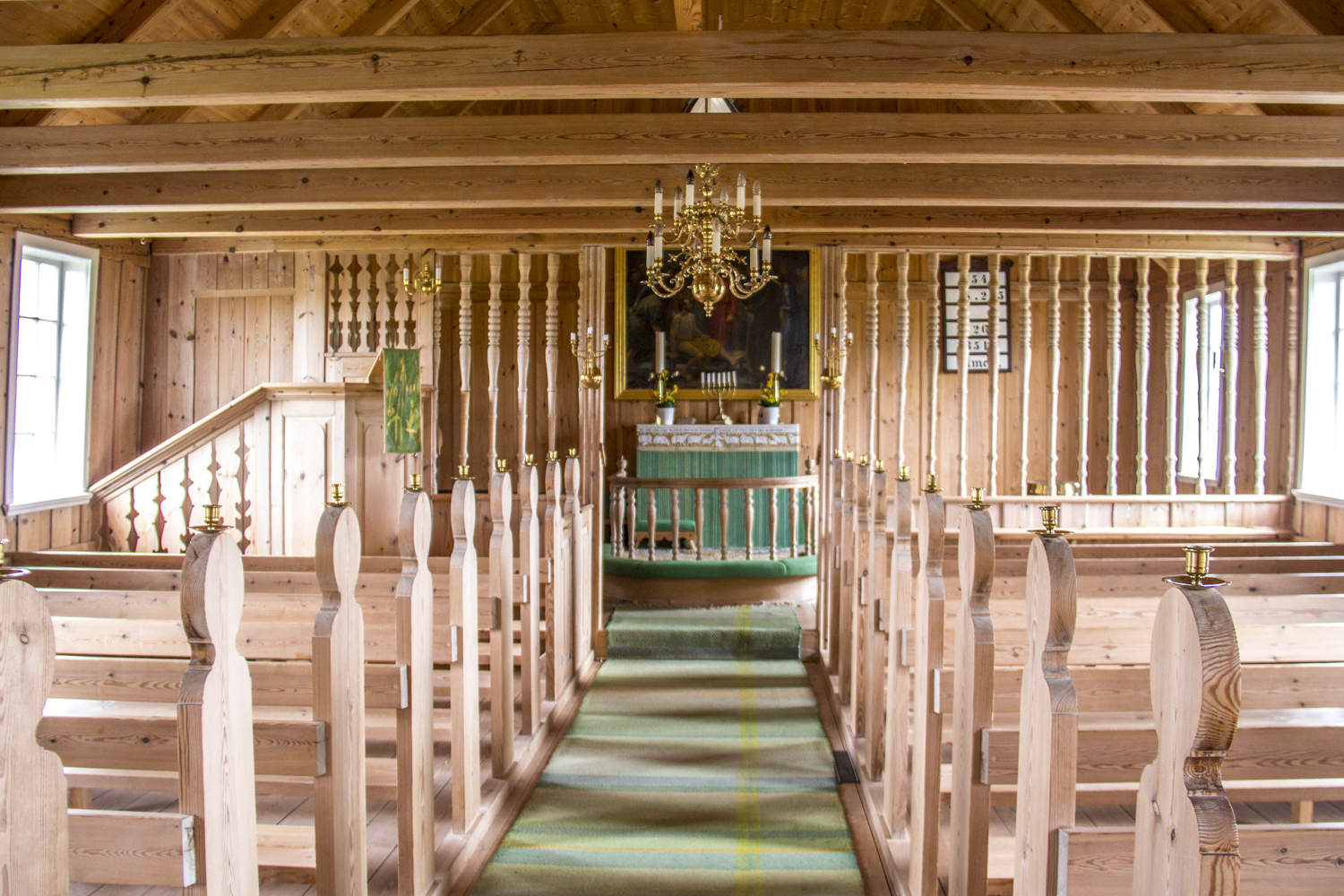 Entering the village, we passed the Bygdarsavn Homestead Museum. This museum occupies a traditional house that was built in 1813 and was once the home of a local fisherman. The house was occupied until 1938. In 1988 it was restored exactly as it would have been when it was a home so visitors can see what life was like for an islander during the nineteenth century. The museum is only open in the summer but private visits can be arranged. Sandur also has a lovely wooden church, a good example of traditional church architecture with black tarred walls topped by a turf roof and a white belfry. Built in 1938 it is the sixth church to have occupied this site. The church has a beautiful wooden interior and while we were looking around Hanna showed us the exact pew where she sat with her family as a child and still uses today. 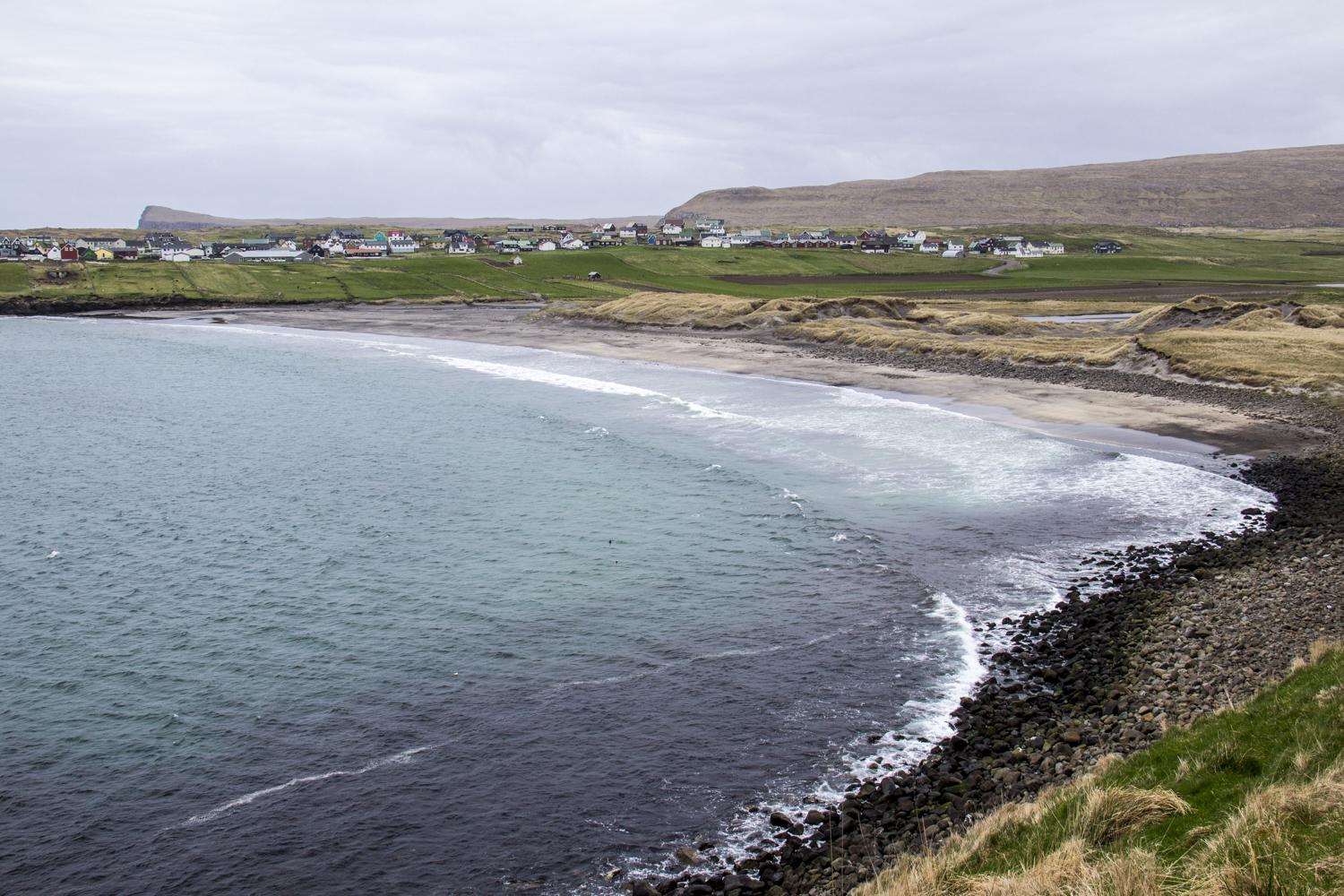 In the centre of Húsavík, our next stop, there is a ruin called Heimi á Garði. It is said to be the remains of a farm that was built by Guõrun Sjúrõardóttir during the fourteenth century. This wealthy lady from Norway owned all the land in the village as well as some properties in her homeland. According to legend she derived her wealth from the sale of a golden horn to the King after she dreamt about its location. It is also said that this strict lady buried two of her servants alive. The ruins are not obvious but close to the site is the protected home of Jóannes á Breyt which is 130 years old and used as a local museum. This tiny house built of basalt is a typical example of an early twentieth century family home in the Faroe Islands. 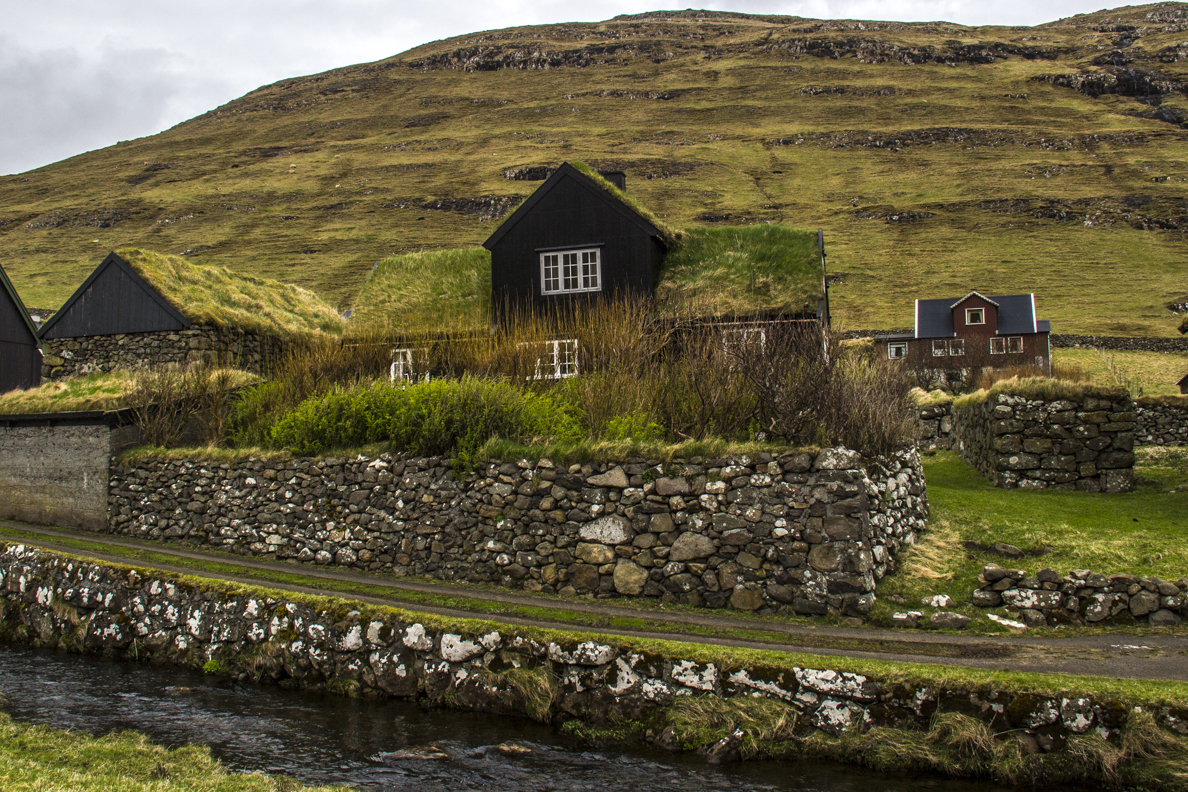 Our journey to Dalur took us around the Kinnartangi headland on a narrow, winding road. The cliffs above the road are a favourite nesting place for a variety of birds including puffins. Scanning the cliff face for birds took my mind off the steep drop on the other side of me. It was in Dalur that I had my first experience of Faroese hospitality. There are no cafés or restaurants on Sandoy but there are opportunities to eat in the homes of the islanders. We were invited to partake in Drekkamunn or refreshments at the home of some islanders where we indulged in a magnificent high tea. When we finished eating we had a talk on the traditional chain dance. The young man who gave the talk was clearly very proud of this tradition and actively involved in the promotion and performance of the chain dance. It is performed to unaccompanied singing and there are thousands of different songs. These songs are sung one after the other and the dancing can last as long as five hours. The person who leads the dance chooses who will be on either side of him to support him. We had a go at it. The steps are very simple but trying to sing the songs was not. As we discovered when we tried to learn a chorus. It was good fun. 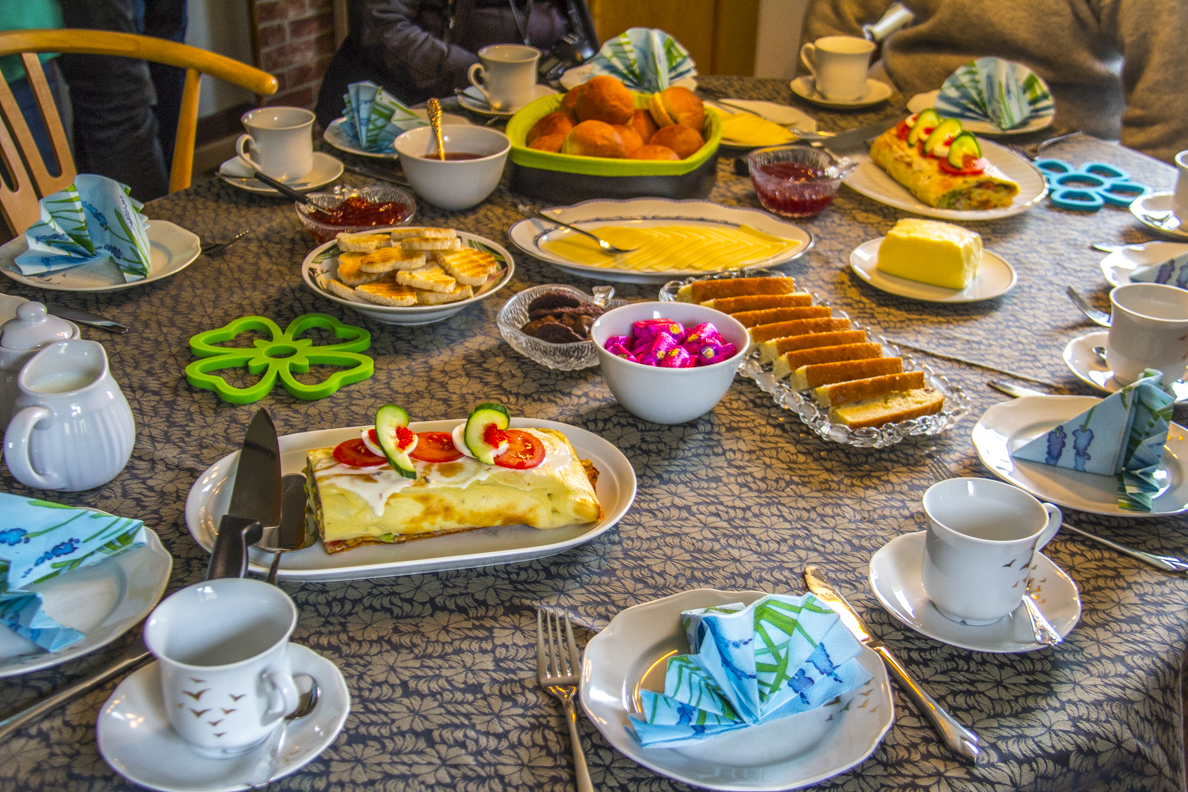 On our way to the beach at Søltuvík we stopped to admire the knitted rock at Bartalstrøð. Between May and September every year this stone is decorated with items knitted by the women on the island. This tradition is rooted in a legend about a troll – there are many legends about witches and trolls on the islands. Knitting is such a popular pastime in the islands that it is celebrated by an annual knitting festival. Every April, women from all over the world meet in Fuglafjørður to take part in living-room workshops with quality teachers and attend interesting lectures. Participants stay in private accommodation and it is the personal feel of the festival and the friendly nature of the community that has ensured its increasing popularity. 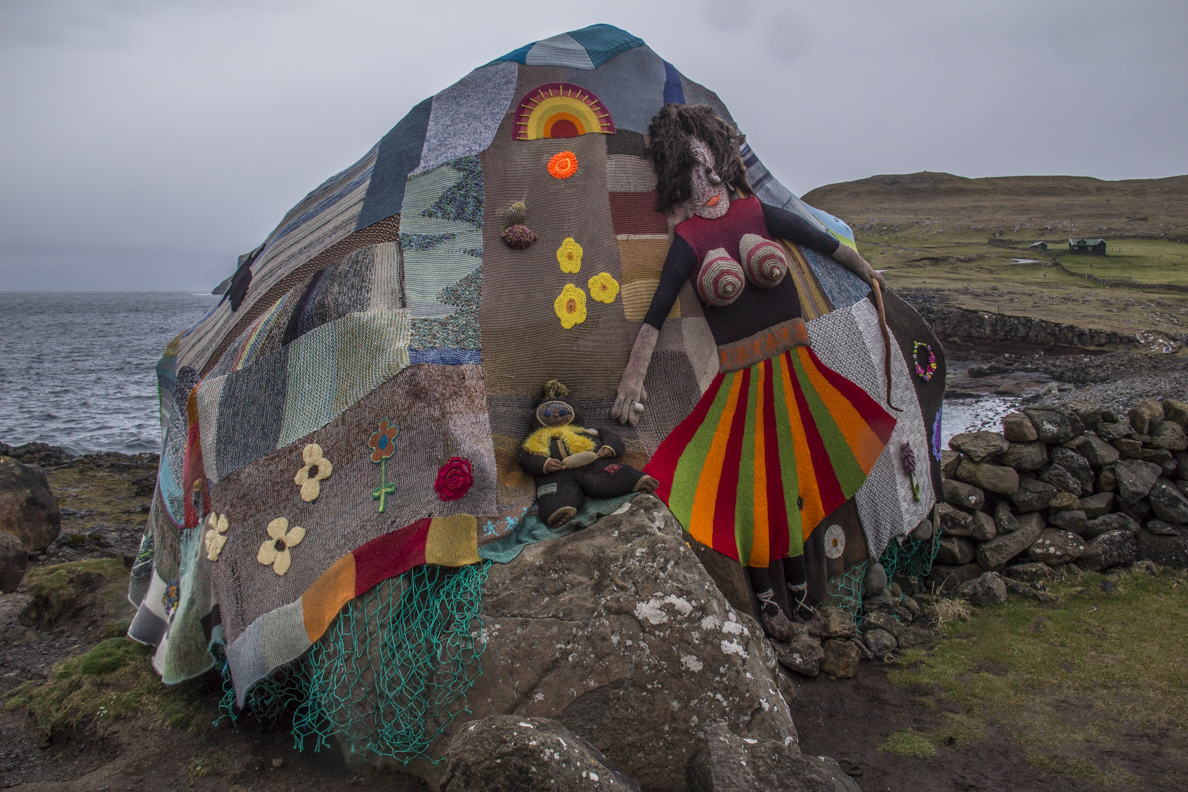 At Søltuvík beach we were joined by our walking guide, Katrin. Before we set off we had some time to explore the beach. That day the beach was tranquil. Seals were swimming in the sea where its waves lapped the shore and birds bustled to and fro searching for food along the water’s edge. But it is not always so calm and a British steamer, Principia, was caught in a storm in 1895 and destroyed on the rocks that fringe the bay. Only one person of the twenty-nine on board survived this tragedy. He managed to climb on to a cargo hatch and drifted in the sea for fourteen hours before being rescued in Kirkjubøur on Streymoy. In 2001 two anchors from Principia were retrieved from the ocean floor in 2001 and they are now on display here alongside a stone in memory of those who died. Our walk took us along the top of the cliffs to a headland from where we could admire the Oknadalsdrangur sea stack. 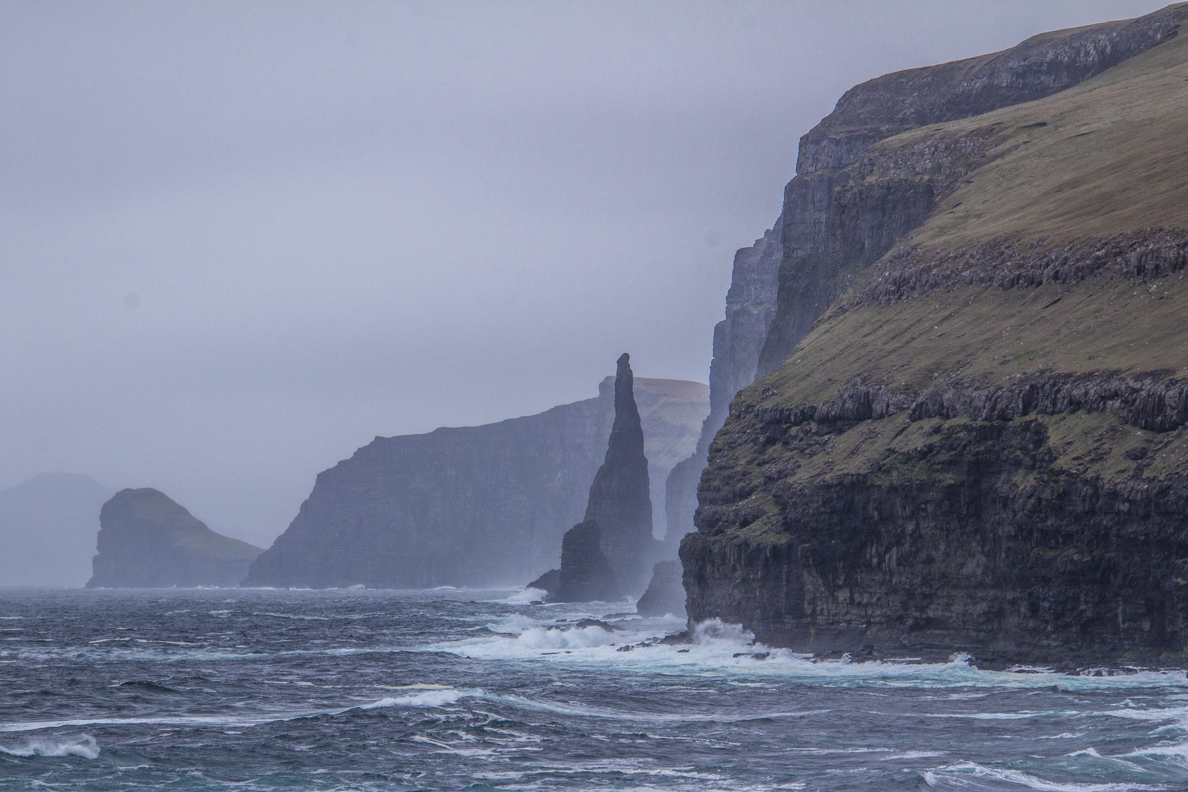 By then it was early evening and we returned to Sandur for my second experience of Faroese hospitality, heimablídni in the home of Hildigarð. Heimablídni or home hospitality is the best way to experience Faroese culture. Guests eat home-cooked food and chat with the locals about their village and their way of life. Heimablídni is offered on most of the islands and can be booked either by directly contacting the people who offer it or through local tourist offices. We dined on fish freshly caught that day by Hildigarð’s husband and finished our meal with homemade cake and coffee. It was a delightful and very filling experience. 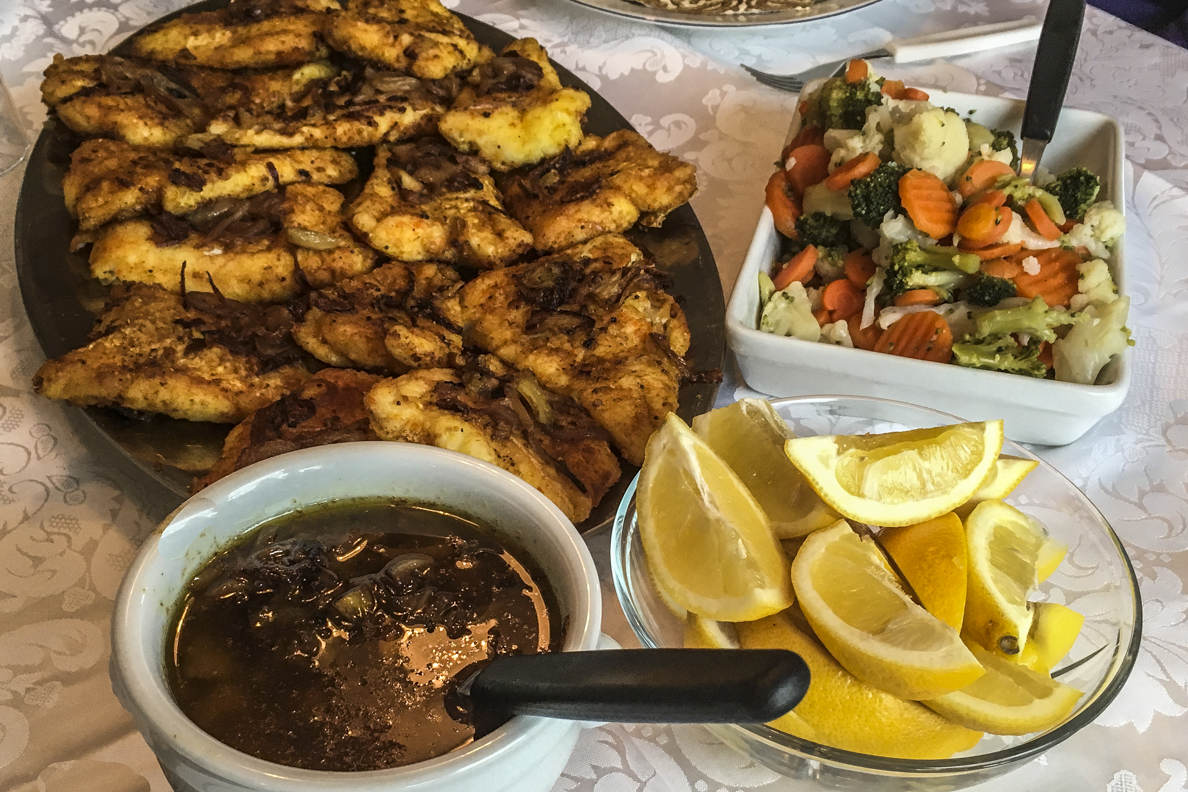 After eating we walked through the village to the Listasavn Art Gallery. The small village of Sandur may seem a strange place for a modern gallery that displays works spanning a century of Faroese. But it has an interesting history. It is the creation of Sofus Olsen who was born in the village. When he was sixteen Sofus went to sea as a fisherman – a tradition in the village in those days. His mother was not happy about this and persuaded him to leave the island to pursue a different career. Olsen went to Denmark where he became a very successful businessman. He bought his first work of art – portrait of a girl by Ingálvur av Reyni – in 1961. Over the next fifty years he built up a fine collection of oil paintings, bronzes, water colours, prints, sketches and ceramics. Olsen married late in life and did not have any children so there was no one to inherit his collection. He decided his collection should go to the village where he was born. The gallery was set up in 2006 and gets around 600 visitors a year. These comprise tourists and those with a particular interest in Faroese art. It is only open in the summer months and only for two hours a day. Olsen left some money to maintain the gallery but the money is running out now and there is no trust fund. There are plans to extend the gallery into the old house to create space for exhibitions of other collections and to try other events to attract more visitors and raise more money. When Olsen died the gallery inherited all his furniture and it has been used to furnish a small sitting room in the gallery. 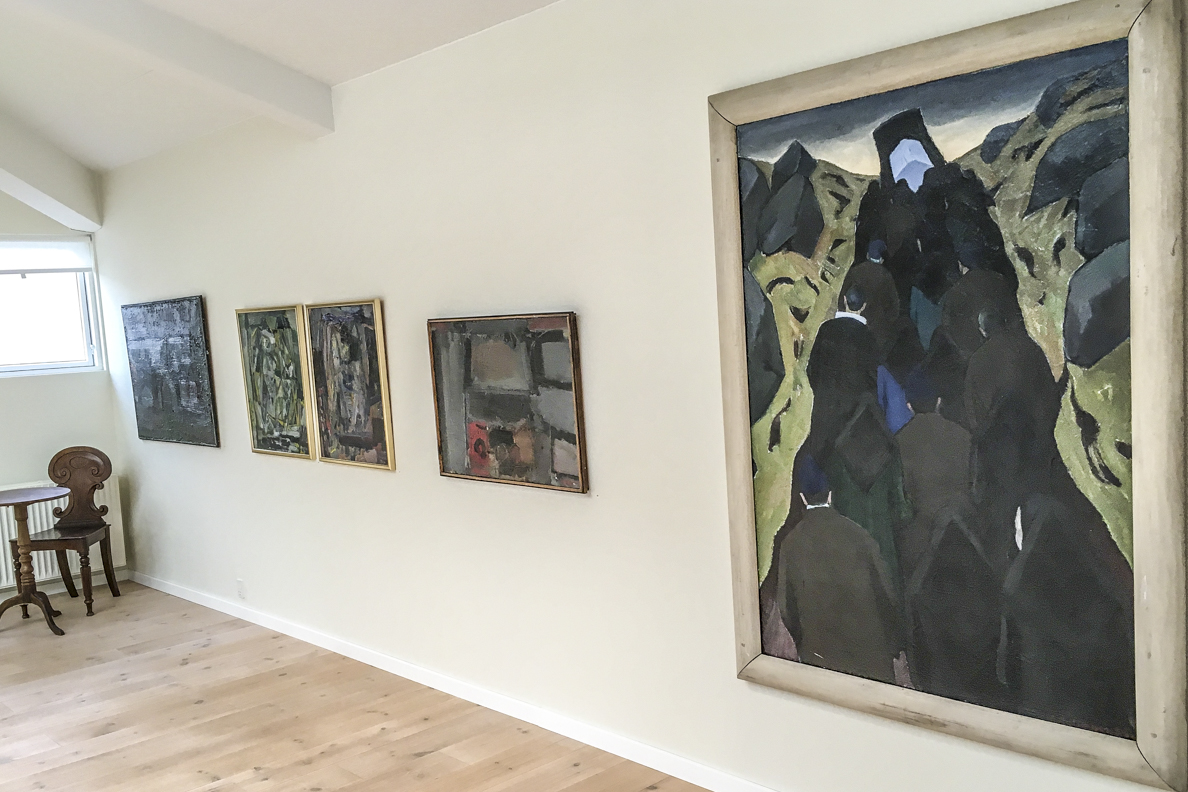 I left the gallery replete, relaxed and more knowledgeable about the Faroese culture and way of life. It was a great day out.

I flew with Atlantic Airways from Edinburgh (a good excuse to spend some time in this lovely city). I stayed in the Hotel Føroyar a lovely hotel above Tórshavn with splendid views of the town and surrounding countryside. It was the first time I had slept under a turf roof.