Tórshavn, the Captivating Capital of the Faroe Islands

On arrival in Tórshavn the capital of the Faroe Islands I caught a tantalising glance of the red and white tower of a lighthouse on a promontory at the far end of the harbour. I decided this should be my starting point and set off to investigate. At first I did not appreciate that the steps I was climbing were actually part of Skansin the only remaining fort of the four that were built to defend the town and Streymoy, its island home. During the sixteenth century Tórshavn had become established as a trading centre and vulnerable to pirate attacks from across the North Atlantic. Magnus Heinason, the great Faroese adventurer, was given the trading rights to the islands he ordered a defensive fort to be built on this promontory in 1580. 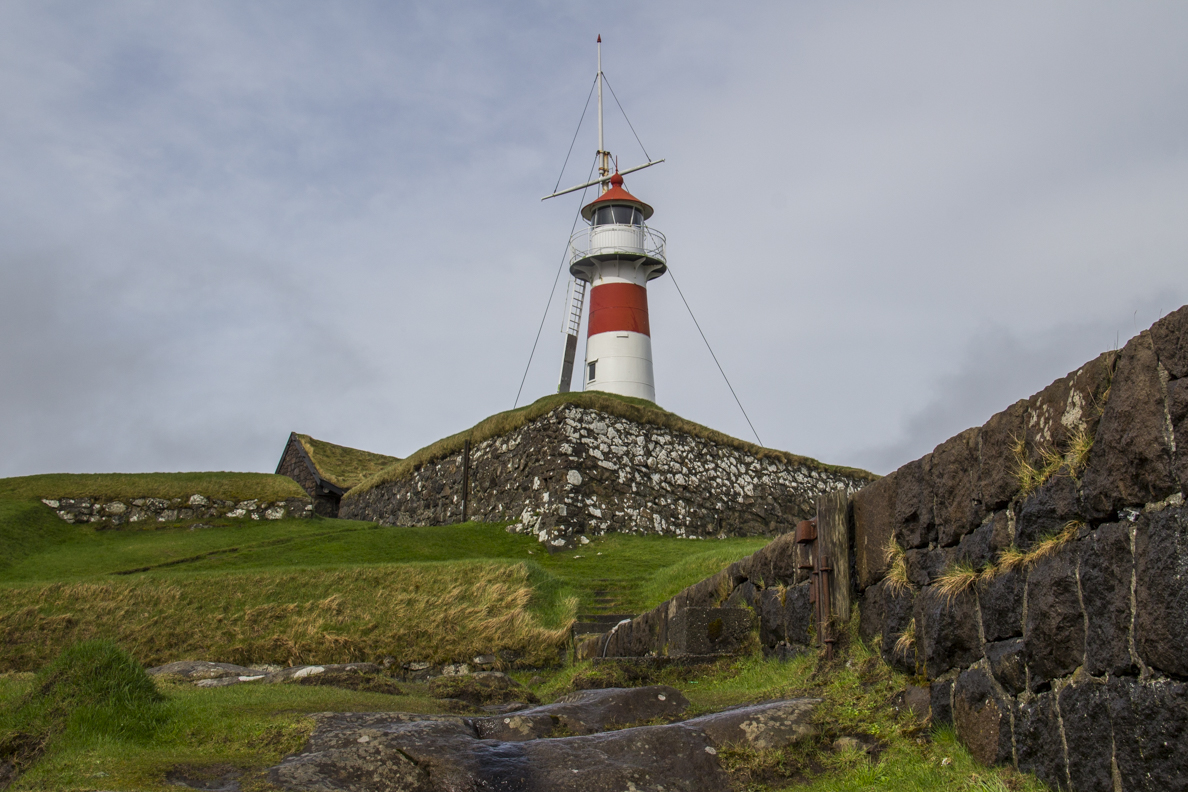 This fort was destroyed by French pirates in 1677 because the islanders failed to meet their demand for 100 oxen, 200 sheep, 500 pairs of gloves, 1,200 pairs of stockings and 60 nightshirts. Its successor was used by the British Royal Navy as a headquarters during the Second World War. The guns that were positioned to protect the islands from a German attack are still there. Today, there is not much left of the fort but the grassy mound is a great place for a picnic while enjoying the views over the sea to the neighbouring island of Nólsoy. 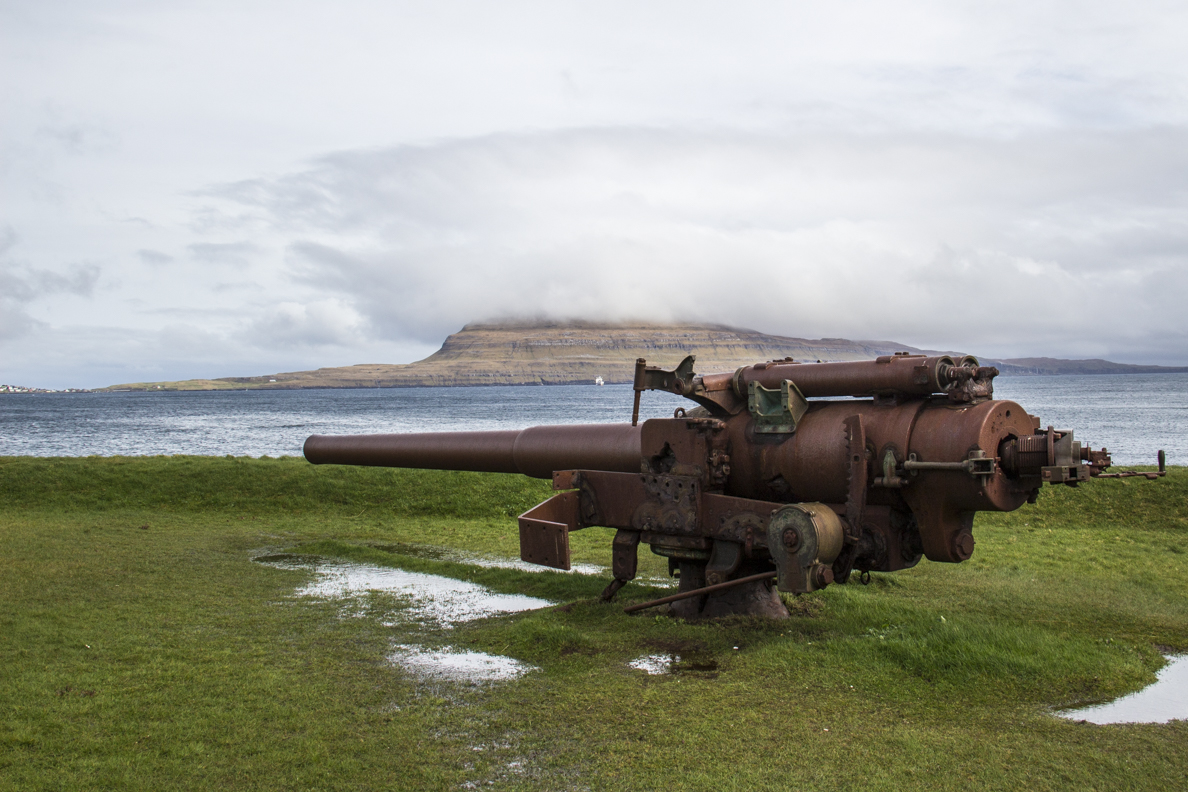 Across the water I could see a flat, black rocky promontory complete with flag pole. A row of red buildings at the back of this promontory looked like old warehouses. Trying to get a good photograph I had not realised I had wandered onto the quay of the commercial harbour of Eystaravág until my view was obscured by a large boat pulling away from its moorings. I was expecting an angry admonishment from the lone dock worker but he took no notice. I had already discovered that very little perturbs the Faroese personality. As I walked back around the harbour to investigate the red buildings further I paused to watch a traditional wooden rowing boat going out to practice for the very popular races that are held here. 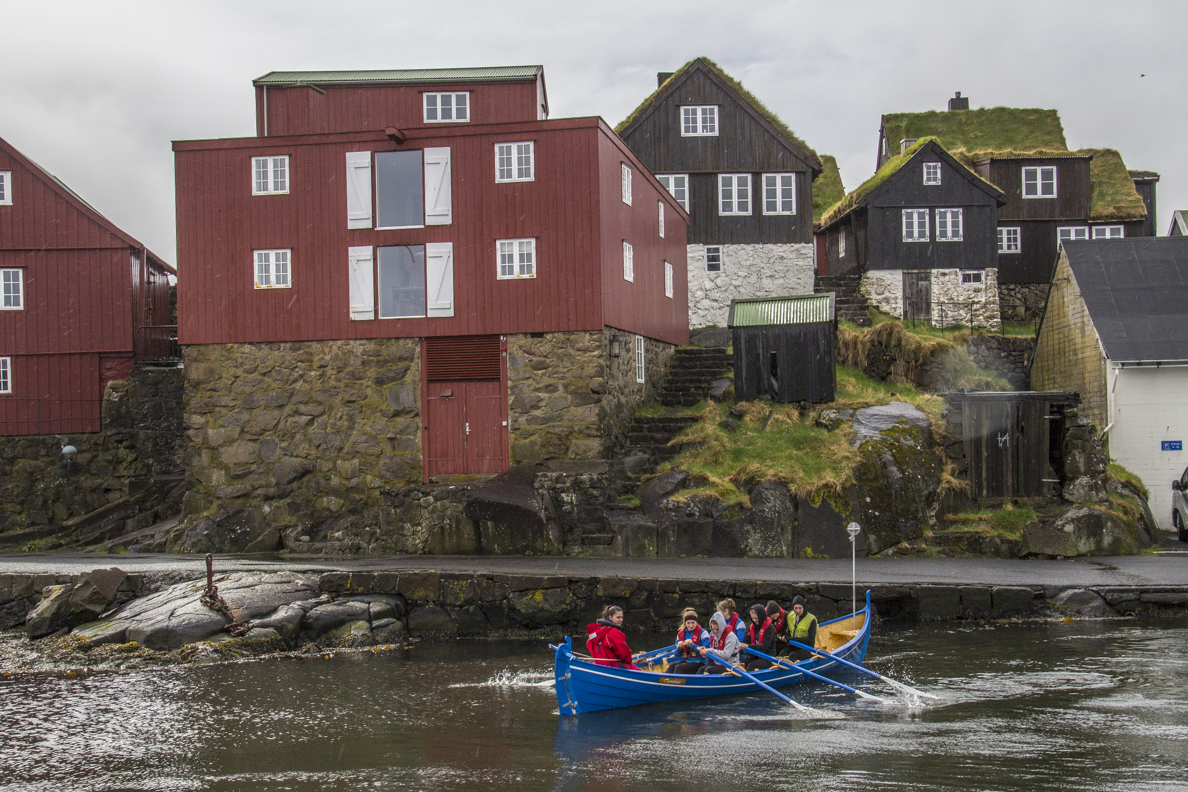 When I reached the waterfront on the far side I found an information board indicating that I was in Tinganes. https://visitfaroeislands.com/place/tinganes/ Tinganes perches on the black rock peninsula that separates the commercial harbour of Eystaravág from the shipyards and marinas of Vestaravág. Historically this area has always been the centre of the capital and is the site of its original parliament that goes back over one thousand years. It is the oldest parliament in the world. Sadly, little remains of the original medieval buildings of Tinganes which were destroyed in a terrible fire in 1763. The red buildings that were once used for storage now house the Faroese Home Rule Government . While remaining part of Denmark the islands have been granted autonomy in some areas of administration in 1948. Former warehouses have been extended and converted to house the Prime Minister’s offices and government ministries. Most prominent of these is Skansapakkhúsió the offices of the Prime Minister. Built in 1749 on the site of a former fort this old warehouse was originally a single storey building with a basement. With the addition of several floors and extensions it is now a building fit for the offices of the Prime Minister. Visitors can wander freely around this area 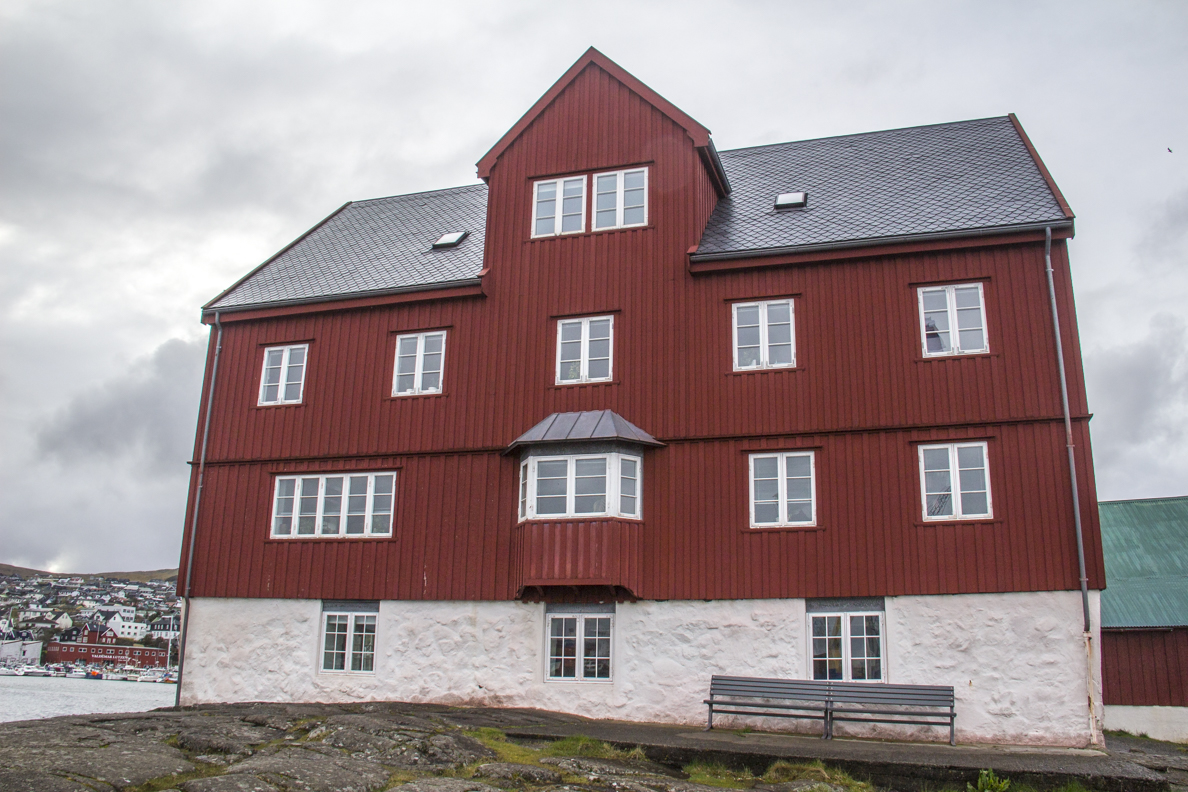 The Faroese Parliament, Løgting, the Parliament, meets in a small building overlooking Vagliò Square. This small, modest building was built in 1856 has undergone several restorations. The most recent in 2000 replicated the original pale-grey exterior walls topped by a slate roof while improving the working conditions of the members inside. Nevertheless, it still resembles the meeting place of a town council and thoroughly deserves its reputation as one of the smallest Parliament buildings in the world. 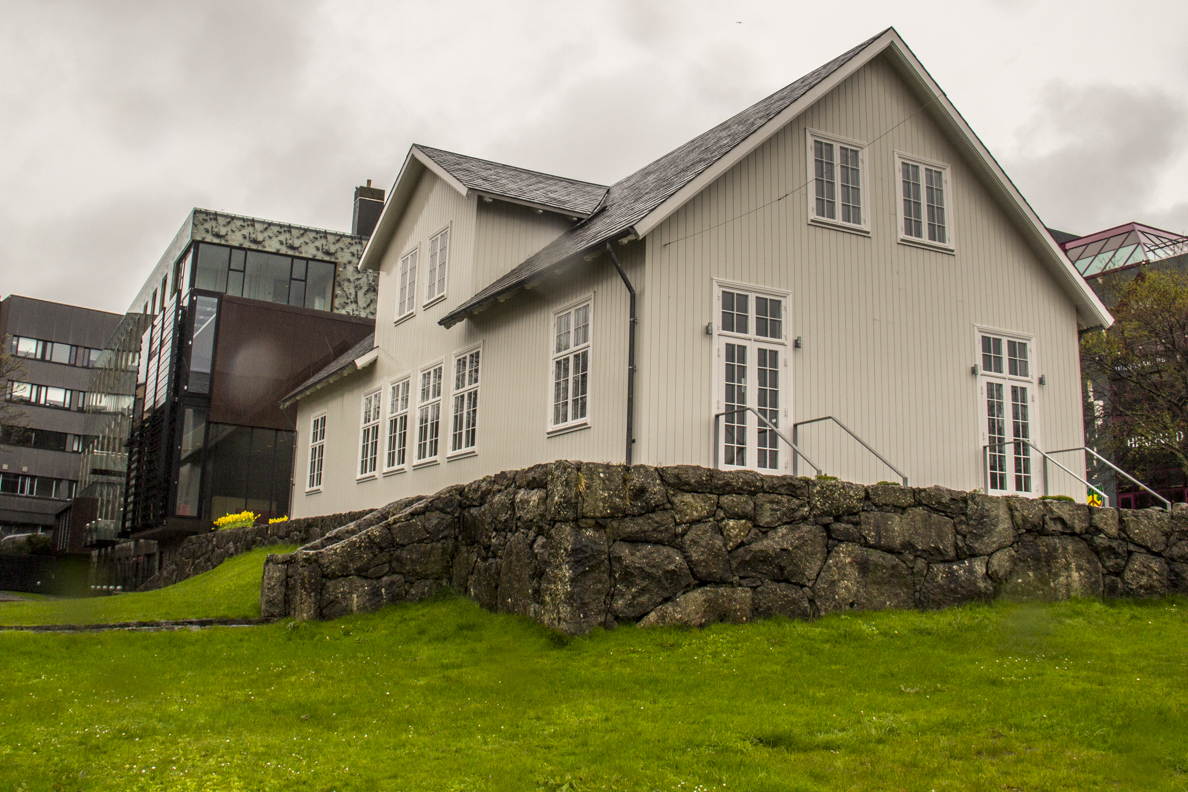 Only two of the original buildings in this area survived the fire in 1763. Leigubúbìn once stored the king’s revenue derived from the Royal Rent Collection. Munkastovan (Monk’s Dwelling) the unusual squat black building opposite with its turf covered roof is an original medieval building and typical of the style of the period. 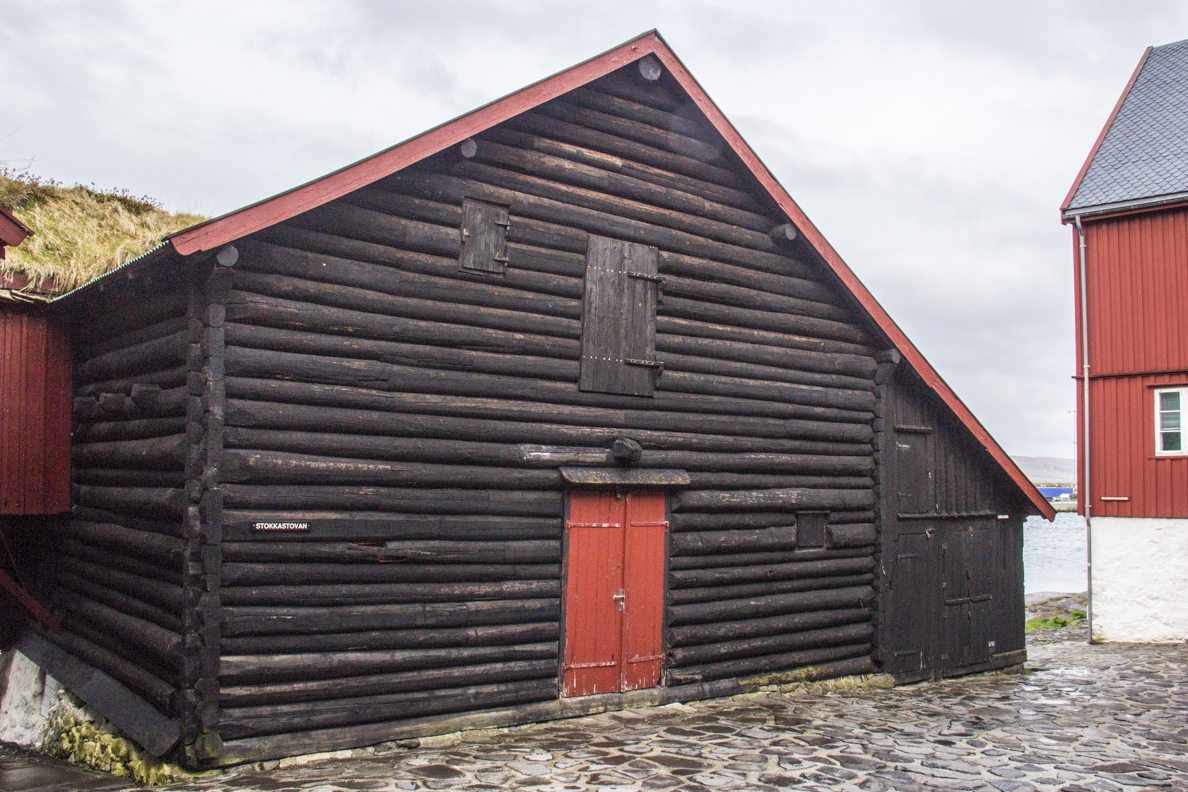 Another impressive building in this area, the Reyngarbur or vicarage, built in 1630 is a good example of the half-timbered Danish design that was popular during the seventeenth century. It is worth taking time to explore this area and compare the different styles of architecture. 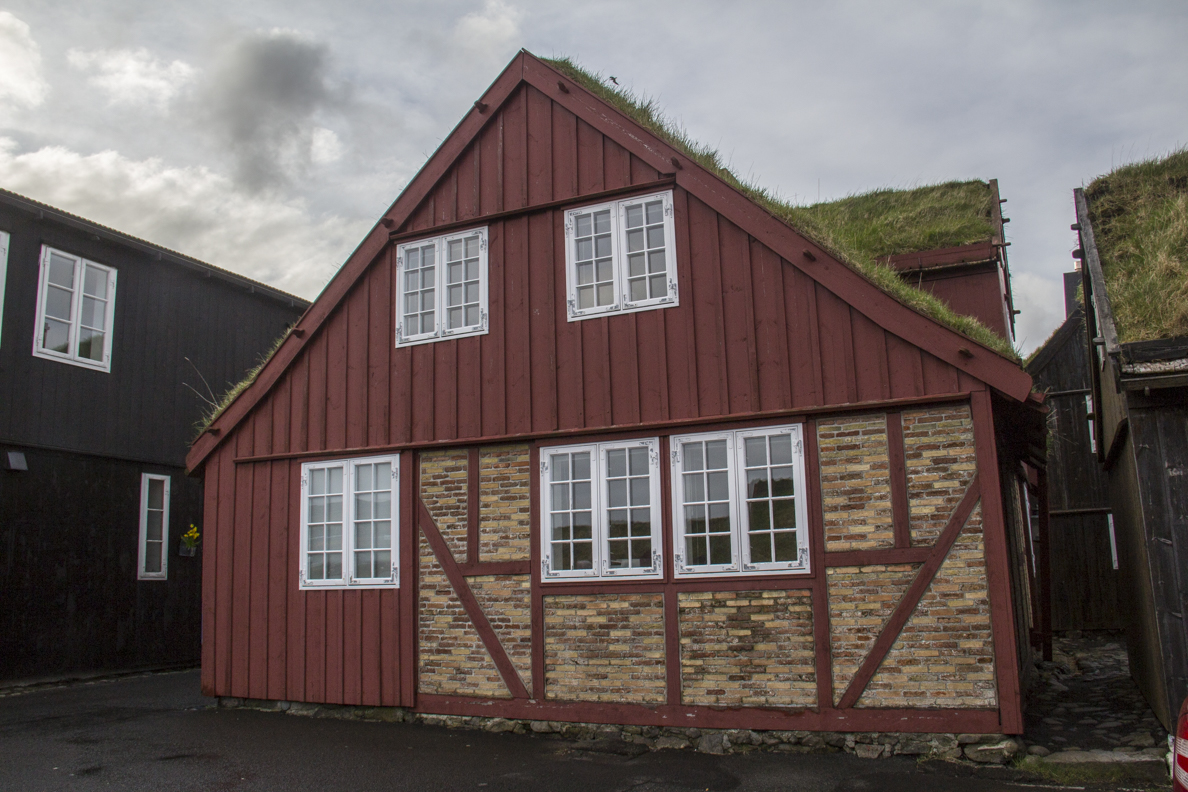 Adjoining Tinganes the old town, Undir Ryggi, is populated by black tarred buildings with white-framed windows beneath turf roofs. These houses were not damaged in the fire of 1673 that swept through Tinganes and date back to the fourteenth century. Hens still wander freely through the narrow alleyways as they have done for centuries although their numbers have declined significantly. The traditional style of housing was small and low not only because they were easier to heat but also because timber is scarce on the islands. By the twentieth century the poverty in the area was reflected in the deterioration of these buildings. The Faroese story-teller, William Heinsesen, once lived here and his tales reflect this. Fortunately, these picturesque buildings were not condemned but have been restored and are still inhabited today. I was fascinated by the grass roofs and discovered that the grass had to be treated like a lawn – watered in dry weather and mown when it got too long. This is where the many sheep that populate the islands come in handy. 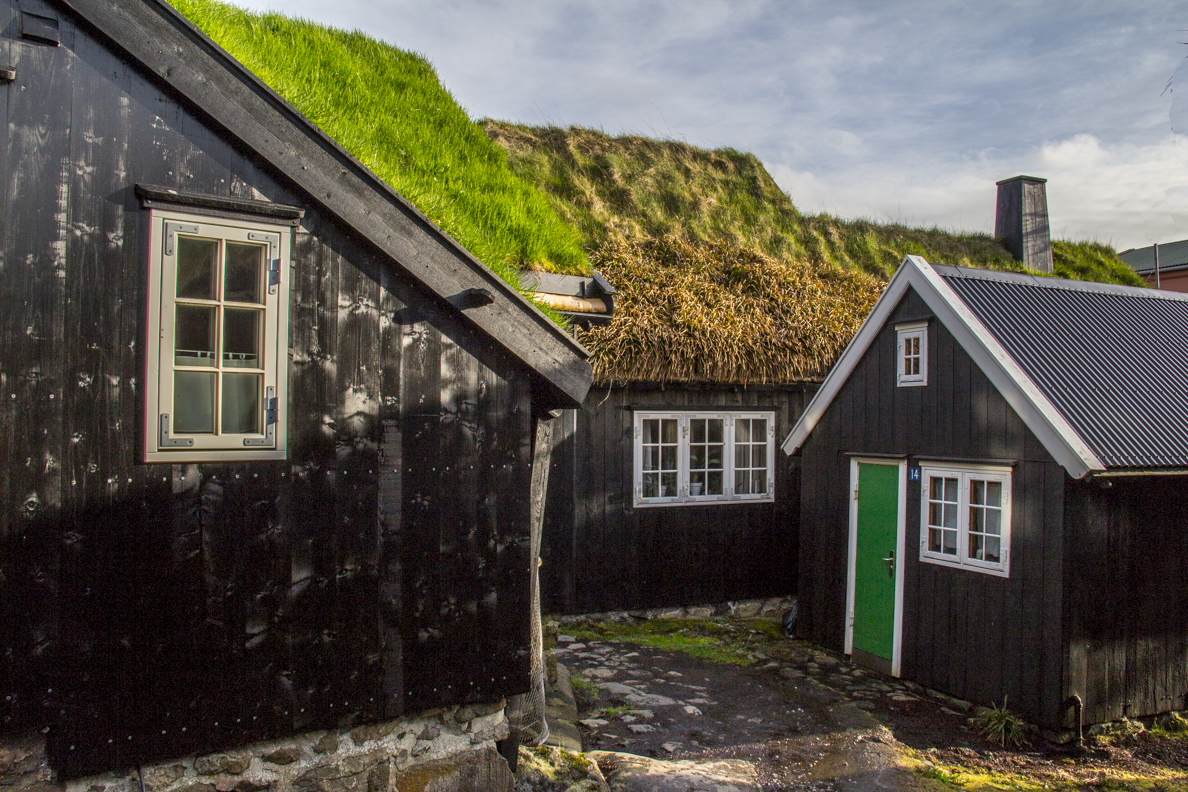 On the edge of the old town I found the cathedral, Havnar Kirkja. This simple white wooden church has functioned as the cathedral since 1990. The first known church in Tórshavn was not built on this site but further along the Tinganes peninsula. It was replaced by the present church in 1788 which was then extended in 1865. A wedding taking place but I was able to crept up the stairs and view the church from above. Bright orange pews, white walls and blue ceiling panels flecked with gold stars are a sharp contrast to the simple exterior. Model ships hang from the roof. These hand-made models were made by the crews of ships that have been rescued as a thanksgiving. 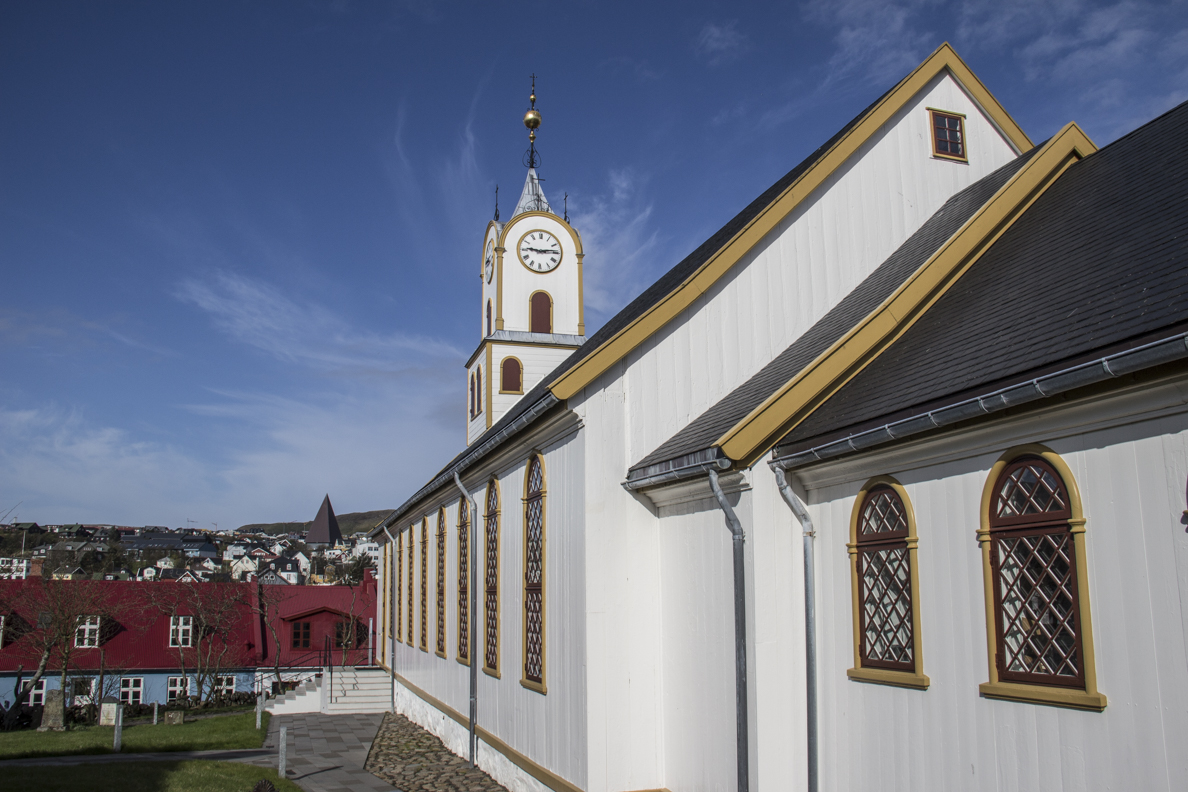 As I wandered down the hill to the harbour I could hear the clamour of an auction taking place. A fishing boat had just come in and the catch was being sold. These auctions can take place at any time of day but there is a regular fish market that takes place on the permanent stalls that line the waterfront. On the other side of the road is a string of colourful buildings housing bars and cafés. I was seeing a very different aspect of Tórshavn – a thriving, modern town. Since the depression of the early 1990’s when half the population left the town has been undergoing a revival and interesting bars and restaurants are prospering thanks to the patronage of a new generation. Advertisements for trips on the wooden sailing ship moored in the harbour is evidence of a burgeoning tourist industry. 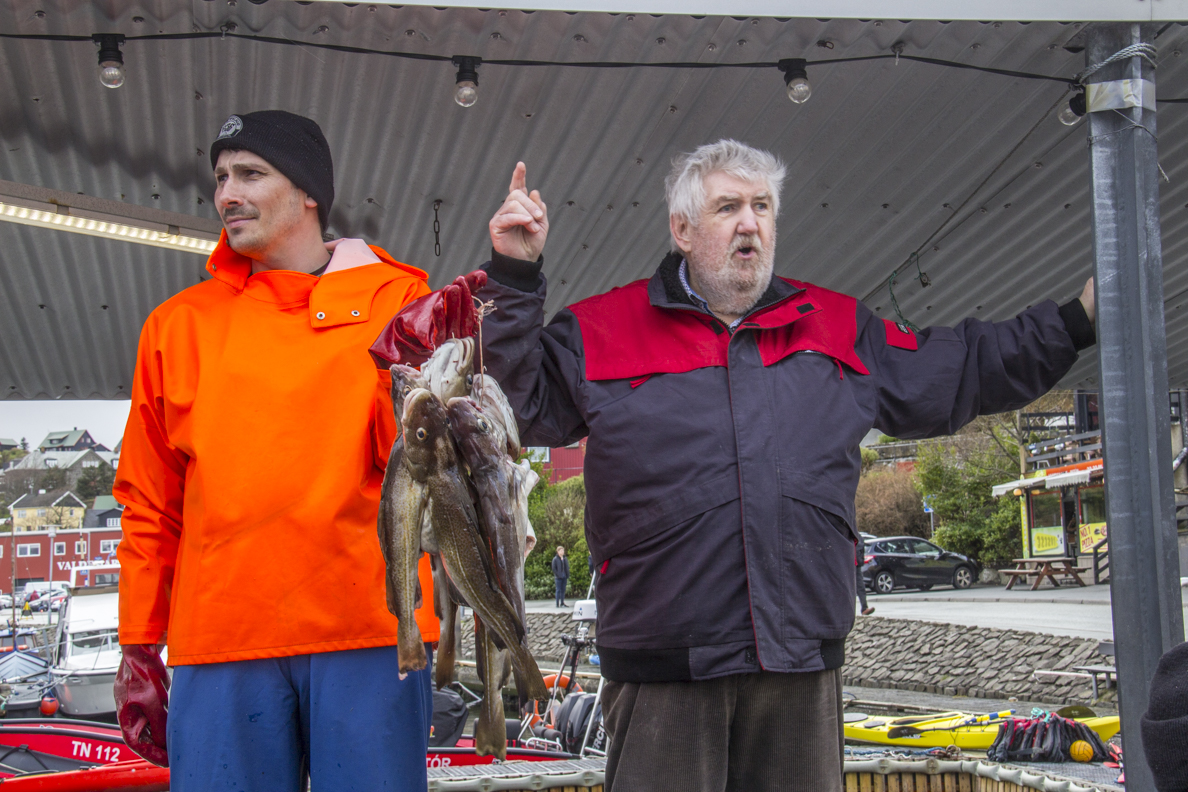 On my way back into the town centre I stopped to have a look at the governor’s house. The flag was flying so he was in residence that day. In front of his imposing home is a grotto and beside that a plaque commemorating the island’s Nobel prize winner, Neils Finson. Making my way along Niels Finsens Gota I started browsing the shops. A popular purchase here is the traditional woollen sweater. Originally, these good quality, hand-knitted sweaters were made to keep the fishermen warm. The tradition continues through a thriving cottage industry. 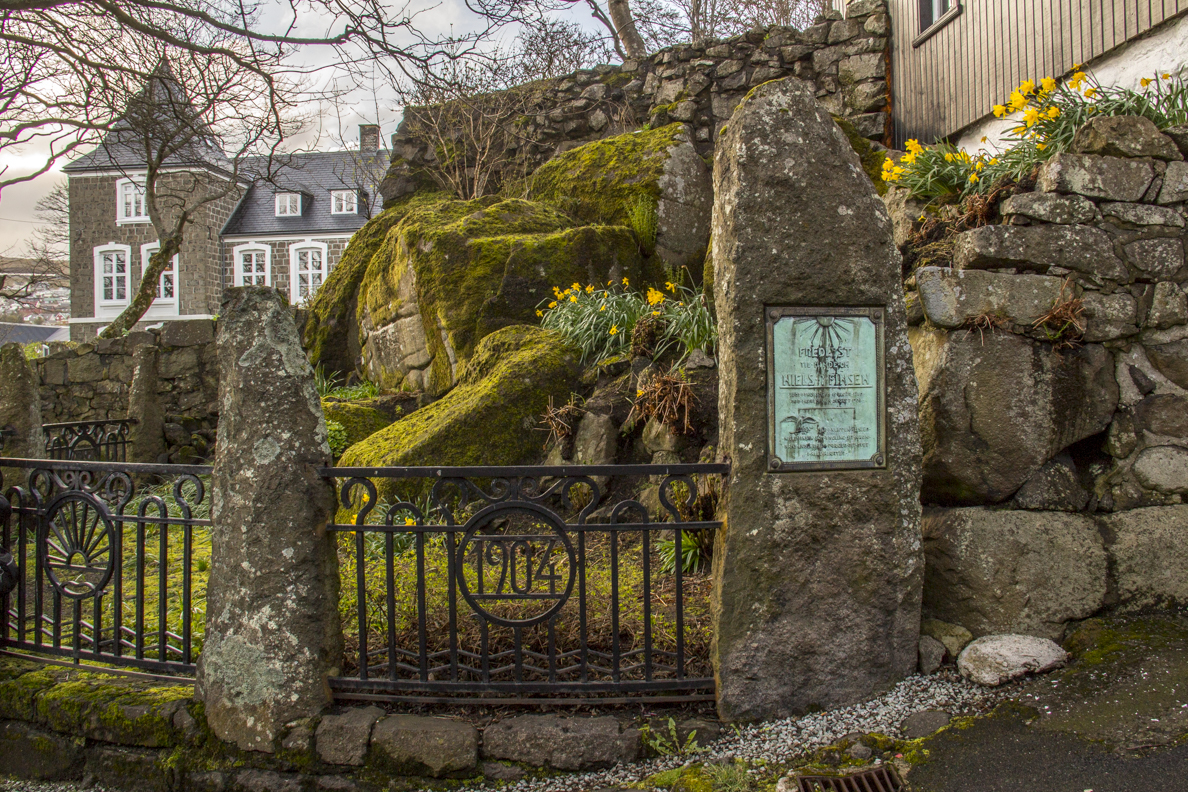 At the end of Hoydalsvegur I arrived in Viderlundin Park although, initially, I did not recognise it as a park. It is a continual work in progress as efforts to create a wooded park have been regularly thwarted by strong winds. Inside the park is Listasavn Foroya, the National Art Gallery. This is housed is low buildings resembling bunkers concealed in the trees. Here, visitors will find the premier art collection on the Faroe Islands. It is a great place to learn about Faroese art and recognise emerging trends of this young art. A ten-minute walk from the art gallery is the Norðurlandahúsið (Nordic House). Opened in 1983 it has developed into the Faroese link with the rest of the Nordic countries through exhibitions, film shows and lectures. Also in Tórshavn is the main museum in the Faroe Islands, the National Museum or Tjodsavn which traces the development of the islands and their inhabitants over the centuries. Also on display are the unique medieval Kirkjubostolarnir pews with their ornately carved bench endings dating back to the fourteenth century. On my way back to the centre of the town I passed the very unusual Vesturkirkja. This Lutheran church with its copper, pyramid-shaped tower and be seen from all over the town and was the source of some controversy when it was built in forty years ago. 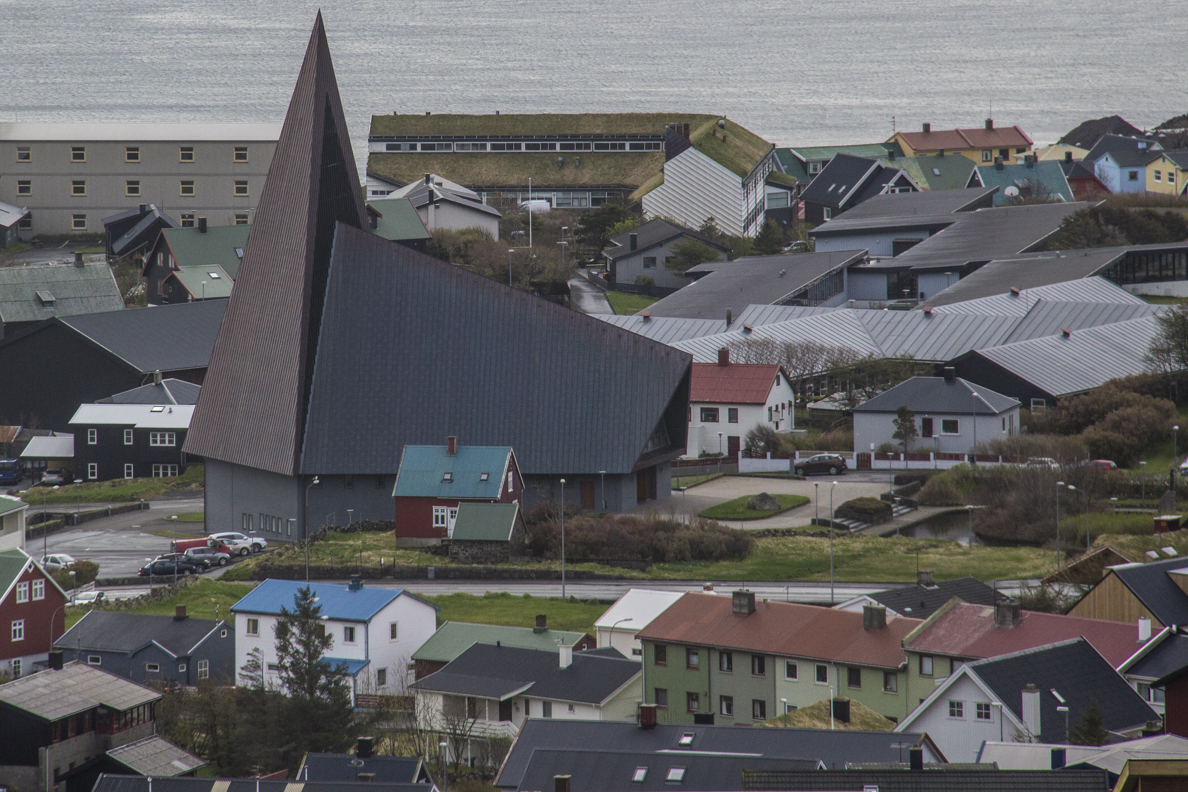 As dusk fell I returned to the jumble of streets in the old town to dine at Barbara fish house, a cosy little restaurant. My meal was preceded by a gin and tonic, a local gin, in a new bar that occupied part of the same building as the restaurant. It was really buzzing and a good start to the evening. 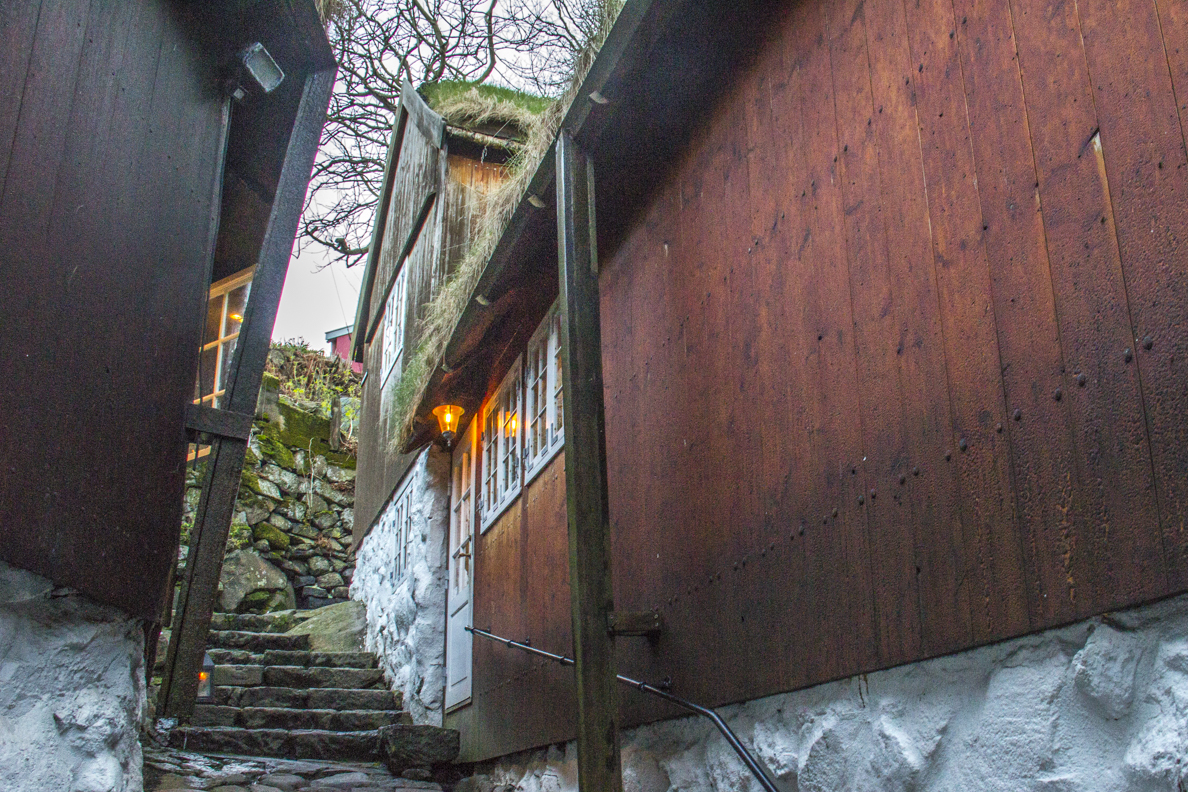 I chose the Menu from our Fjords. This was a great selection of fresh sea food – the dishes just kept coming, each one as good as the one before and all delicious. My favourite was the monk fish with white asparagus. I finished with a deconstructed cheese cake. The perfect way to end my day in Tórshavn. 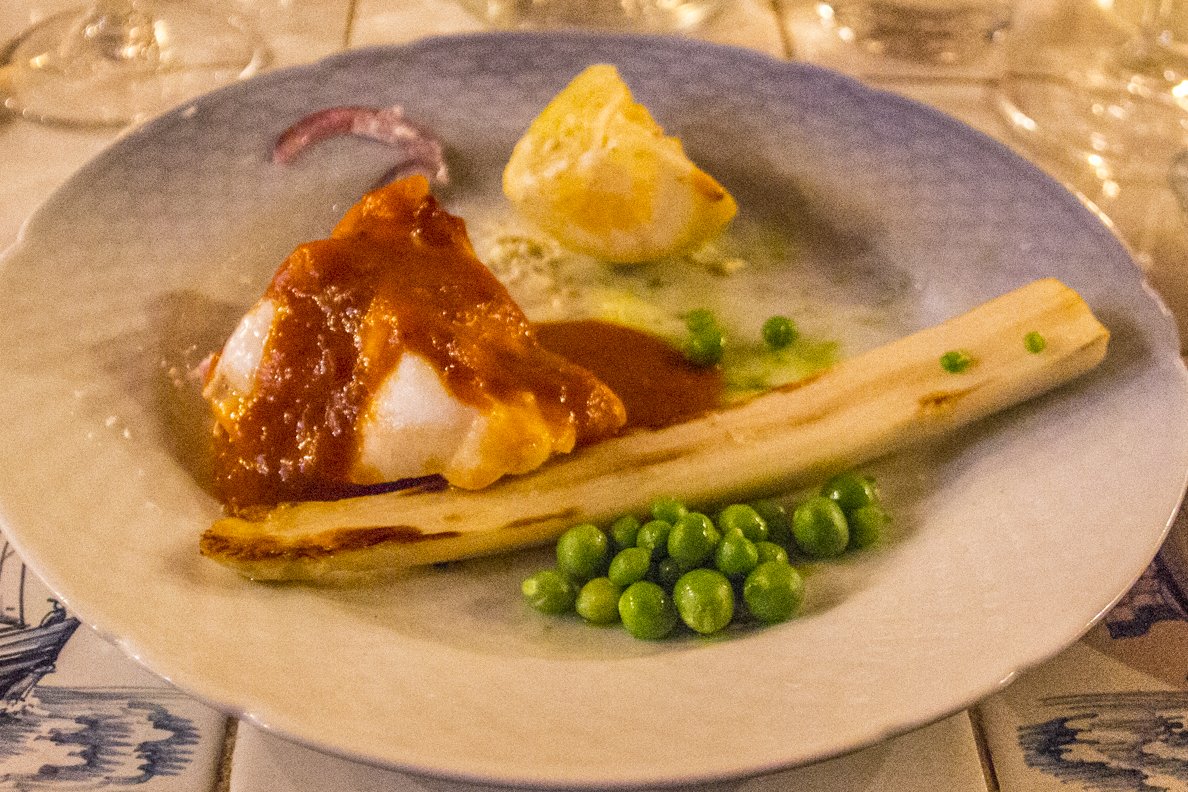 I flew with Atlantic Airways from Edinburgh (a good excuse to spend some time in this lovely city). I stayed in the Hotel Føroyar http://hotelforoyar.fo/en/ a lovely hotel above the town with splendid views of the town and surrounding countryside. It was the first time I had slept under a turf roof.