St David’s, a Welsh Village that became a Charming City

St David’s on the ruggedly splendid Pembrokeshire coast in Wales is utterly charming. When I checked into the excellent Twr y Felin Hotel I had no sense at all of being in a city, albeit the smallest city in the UK. Close to my hotel, at the top of the High Street I found Oriel y Parc the visitor centre for the Pembrokeshire Coast National Park which was designated as such in 1952 and incorporates St David’s Peninsula close by. The National Park was created to protect the environment and sets a fine example with its own visitor centre. 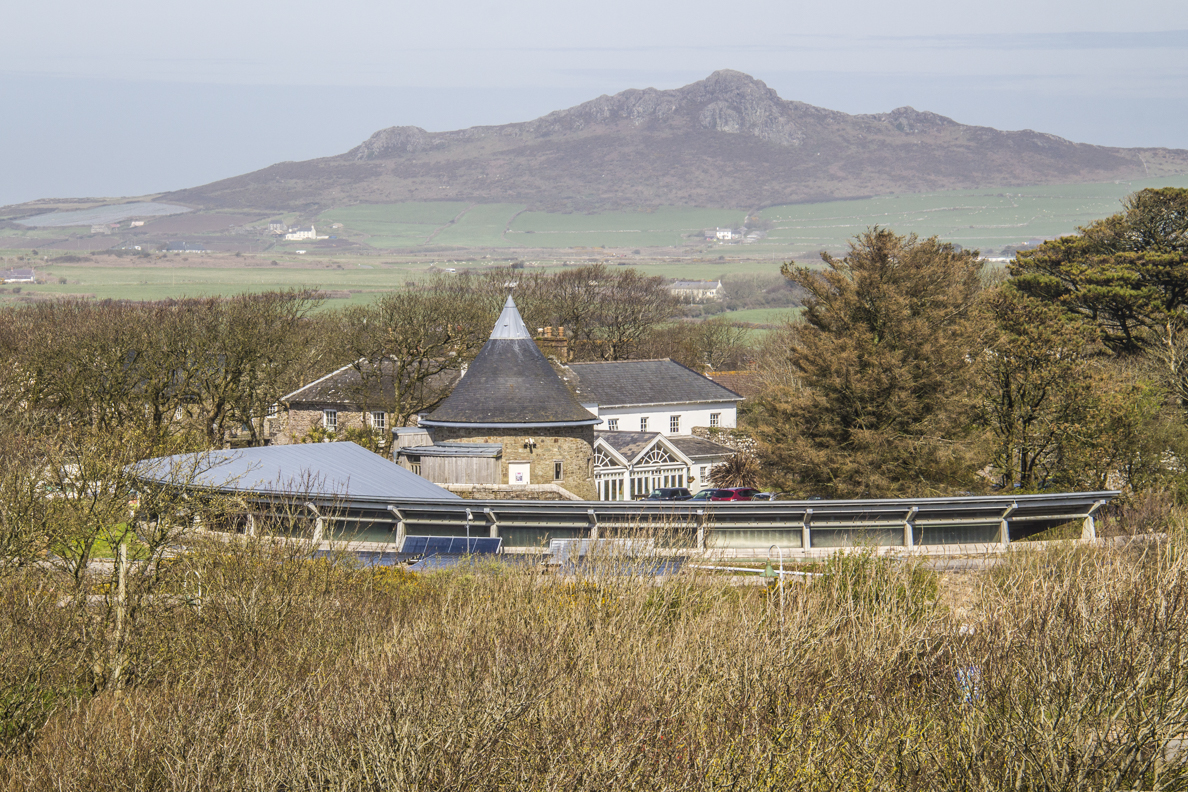 Oriel y Parc is an innovative building utilising state of the art green technologies to provide its own power and water. The building is aligned so that the sun tracks its crescent-shaped roof generating power throughout the day. Rainwater is funnelled from the roof into a huge storage tank under the front courtyard to be used for domestic purposes. There are some delightful nods to tradition as well. In the centre of the courtyard is the St David’s Day Stone. This flat stone has been inscribed with the Pilgrim’s Prayer by former Archdruid James Nicholas. At noon on St David’s Day a beam of sunlight passes through a hole in the adjacent rock pinpointing the exact centre of the building on this stone. The tower, designed to reflect the old windmill tower at Twr y Felin, was constructed in 2001 using reclaimed stones from derelict buildings. It was part of the first phase of the building that was extended in 2008 to include a gallery. Thanks to a partnership with Amgueddfa Cymru, the National Museum of Wales the main gallery hosts several prestigious exhibitions throughout the year. As the centre also includes a shop, a café and lots of information about St David’s and the surrounding area I was there for quite a while. 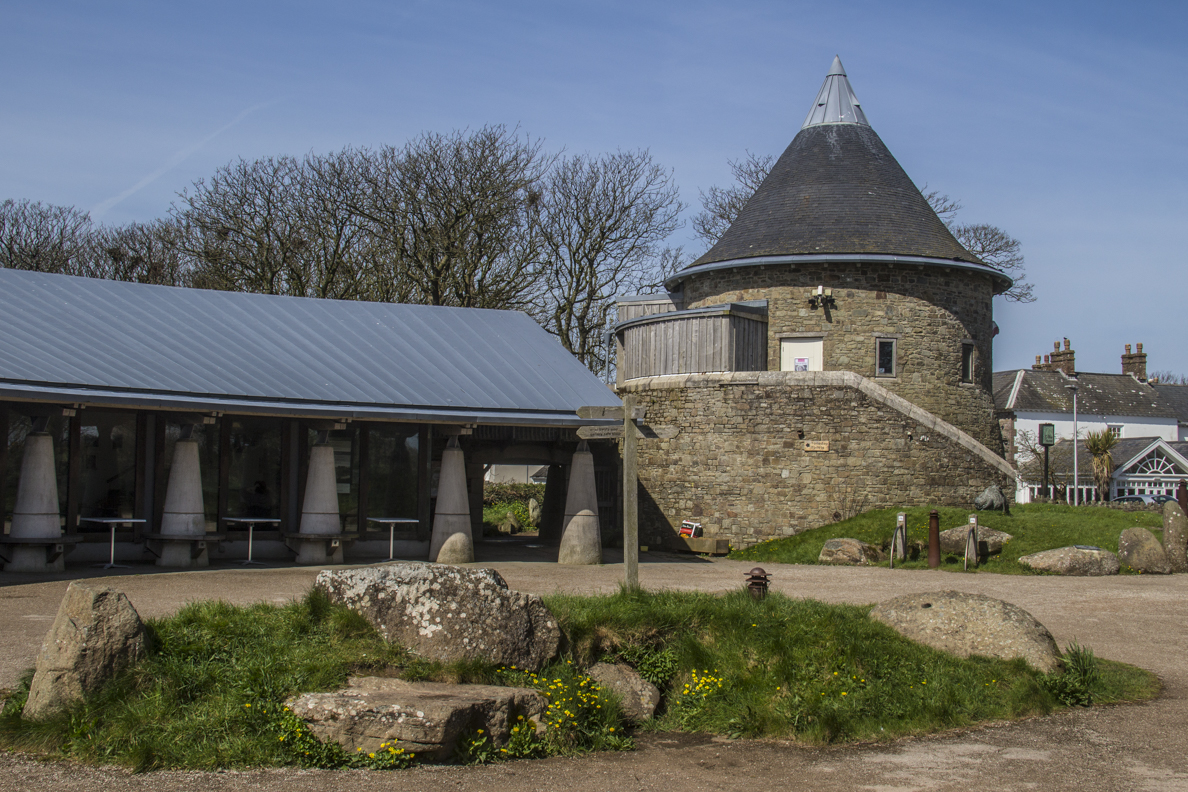 It was very pleasant strolling down the High Street. It is lined on both sides with interesting shops, small restaurants and cafés. I passed the Veg Patch (green grocer), Interesting Things (a craft shop) and St David’s Food and Wine as well as City Hall (town council and community shop) on my way to the centre. Here I found the fourteenth century cross. The square below this cross is ringed with benches and a very pleasant place to sit and enjoy an ice cream from Chapel Chocolates across the road at the top of The Pebbles. 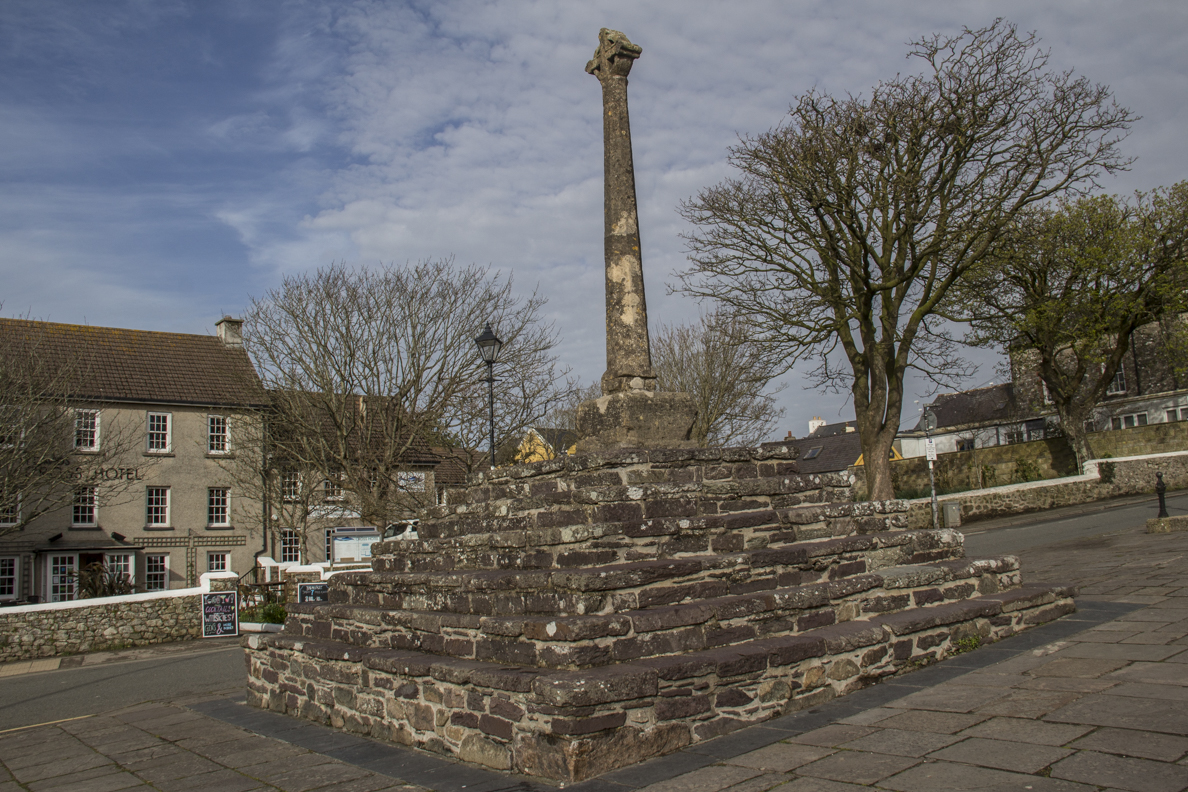 I decided I would treat myself and went inside to make my choice. This was difficult so I had a tasting session and chose apricot and brandy with walnuts. When presented with my ice cream it was accompanied by a beaming smile and the endearment cariad so I forgave her for giving me the rum and raisin flavour. It was delicious. 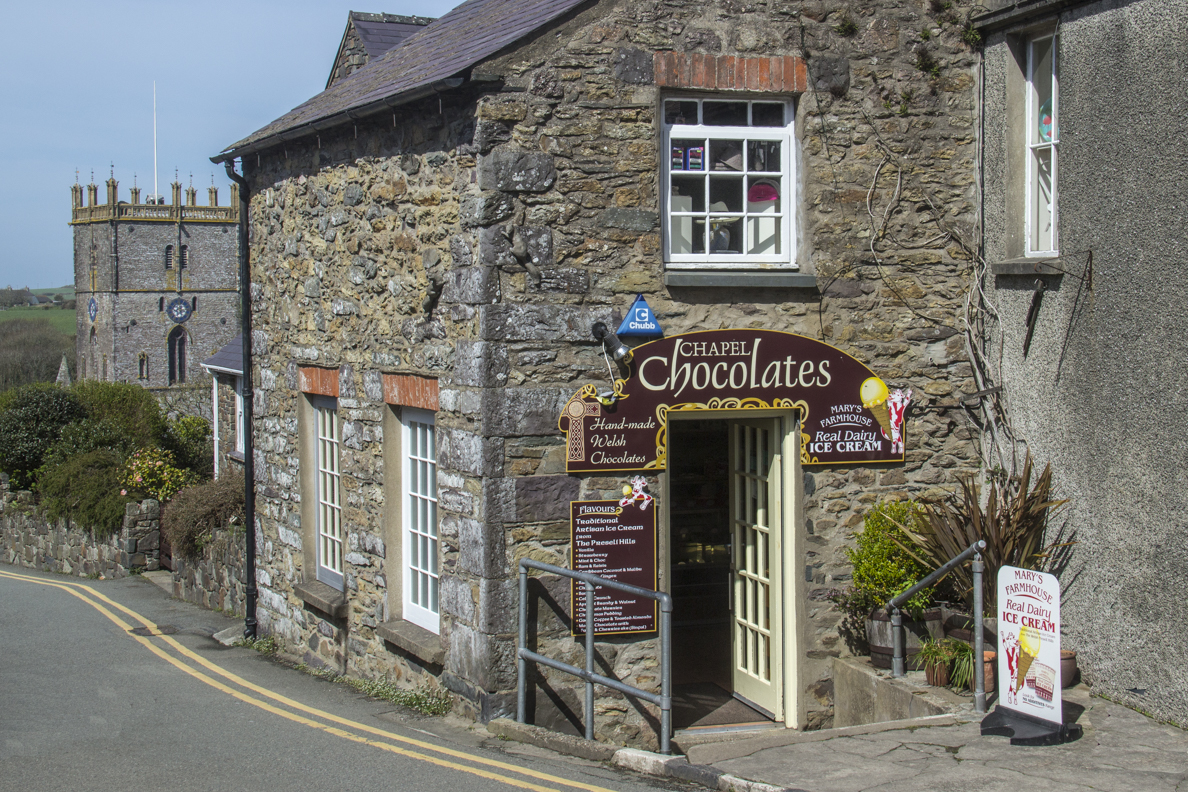 I carried on down The Pebbles to Porth y Twr or Tower Gatehouse. This is the only gatehouse that has survived of the original four penetrating the walls that once encircled this part of the town. These walls were built at the end of the thirteenth century to enclose the original cathedral city. The Tower Gate House was used by the medieval town council. Below this building is the bishop’s dungeon and beside it the thirteenth century Bell Tower. This detached tower housed the cathedral bells until 1730 when they were removed as the tower had become unstable. The bells were put back in the in the 1930s when an anonymous donor paid for the tower to be repaired and strengthened. The only remaining medieval bell is on display in the Exhibition in the Tower Gate. This exhibition includes information about the Cathedral of St David and present and Saint David himself. Pilgrimages to St David’s were popular in Medieval times due to its strategic position at the junction of important land and sea routes between England, Wales and Ireland. During the twelfth century Pope Calixtus II declared St David’s Cathedral to be a place of pilgrimage and it remains so to this day. 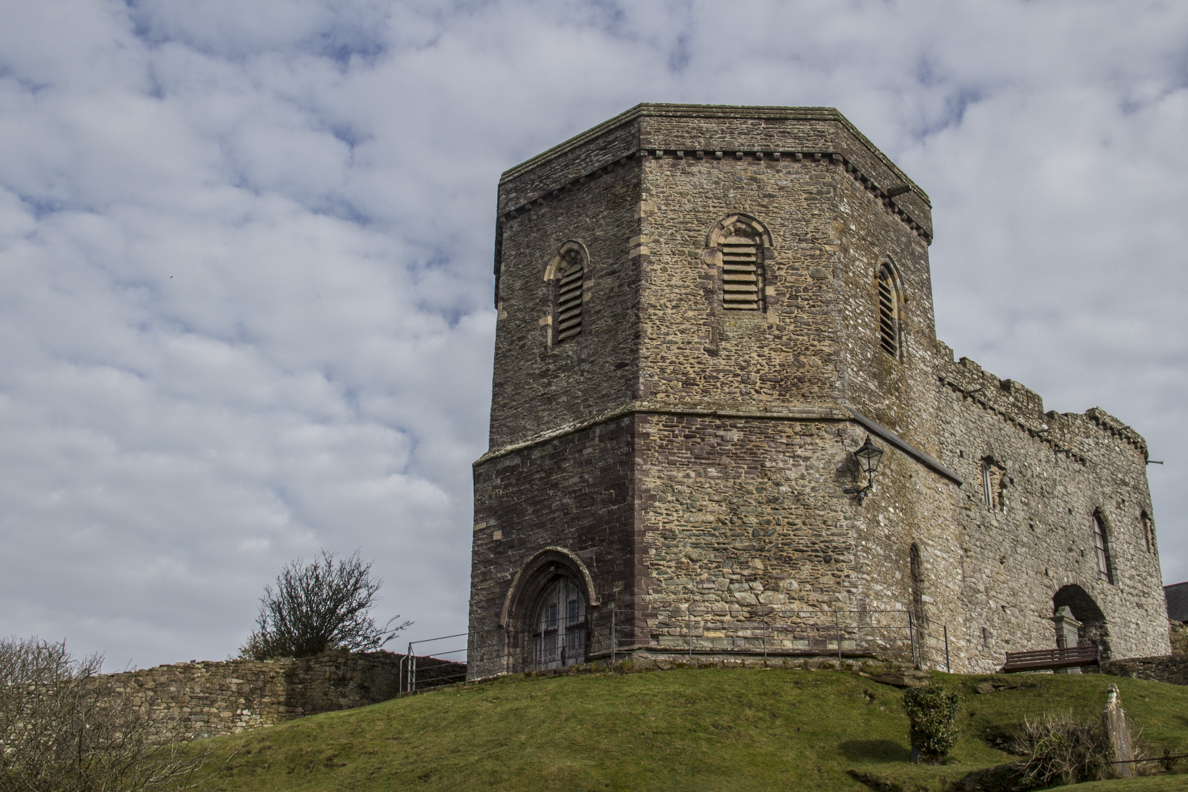 After passing through the archway all I could see was a road ahead of me. Then I realised the Cathedral of St David was spread out at the bottom of the valley below me. It was a wonderful sight and I paused to take it in before walking down the long flight of steps that leads to it. This is believed to the fourth cathedral to be built on this site since St David founded a monastery here during the sixth century. The Norman Bishop, Peter de Leia, built the present cathedral, including a shrine to St David, in 1180. He also began building a tower but that fell down and the current tower was begun during the fourteenth century and completed in the early fifteenth century. The swampy grounds around the River Alun that flows through the valley caused problems for the Norman architects and today visitors will notice the nave pillars lean outwards. 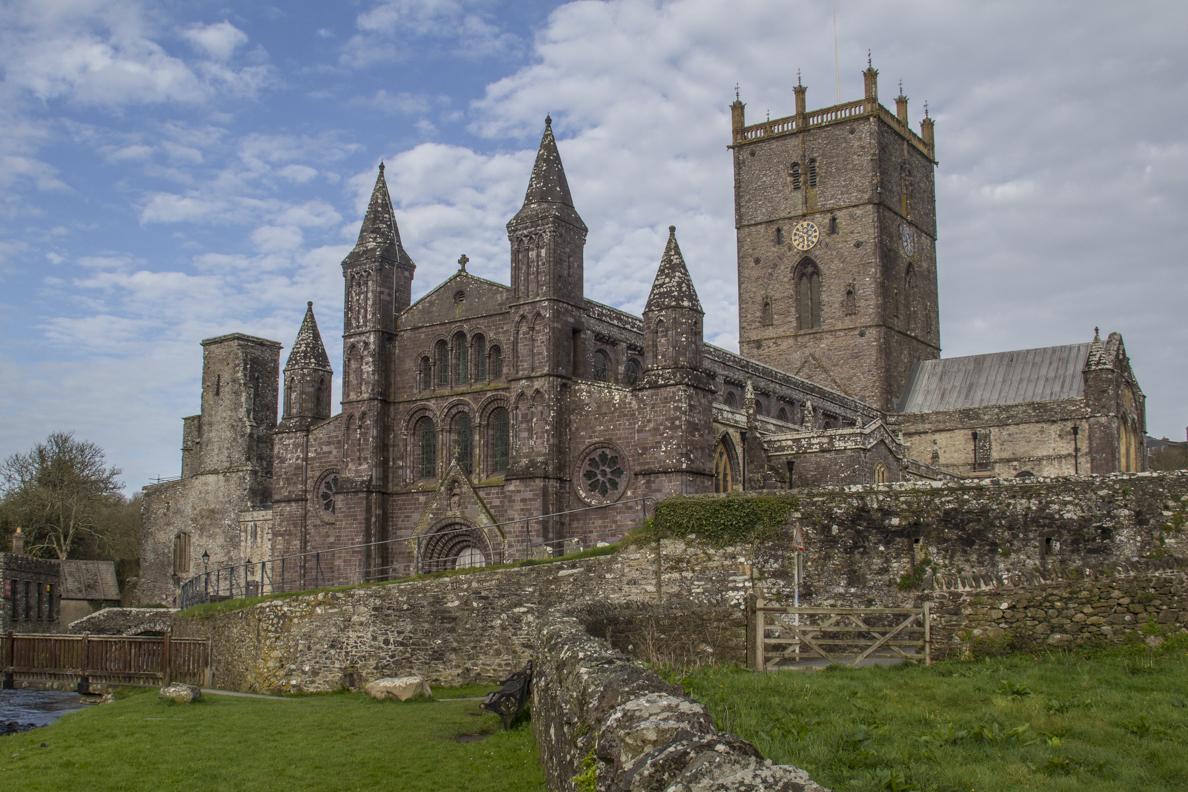 A medieval shrine to St David was built in the presbytery of the cathedral close to the High Altar but this shrine was destroyed during the Reformation resulting in a dramatic reduction in the number of pilgrimages made to this site. In 2010 the Very Reverend Jonathan Lean, Dean of St David’s, started an appeal to restore the shrine. Sufficient money was raised and artists who live in Wales were commissioned to do the work. The restored shrine was unveiled and re-dedicated on St David’s Day in 2012. The three icons on the front of this shrine depict, from left to right, St Patrick, St David and St Andrew.  Reputedly, the two reliquaries in the three niches at the foot of the shrine contain the remains of St David and St Justinian. The latter was a close friend of St David who chose to live a life of piety on Ramsay Island just off St David’s Peninsula. Today the island is a wild-life sanctuary. 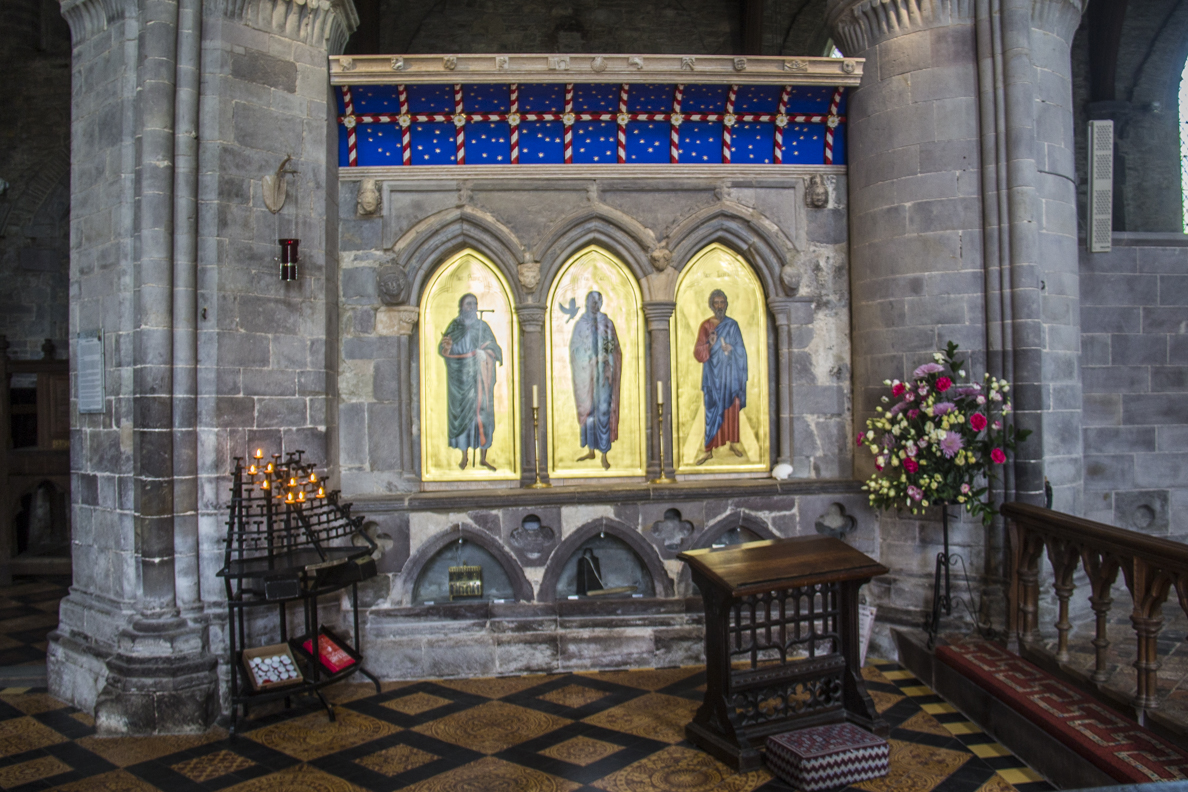 A shadow of its former splendour but nevertheless impressive the Bishop’s Palace is a haunting reminder of the former wealth and power of the clergy in Wales. Work commenced on this palace when the Normans arrived in the eleventh century but the most significant developments occurred at the end of the thirteenth century and the beginning of the fourteenth century. It was during the later period that Bishop Henry de Gower (1328-47) built the Great Hall, complete with wheel window in the east gable, the distinctive arcaded parapet and the majestic porch. It was during the Reformation that the palace fell into disrepair and all that remains is what can be seen today. The palace is open to the public and features an exhibition in the undercroft. Later bishops made further additions and alterations to the palace, but with the Reformation the story of decay and destruction in the 16th and 17th centuries began. A new exhibition, entitled Lords of the Land, is situated in parts of the palace undercroft. It The palace is also a popular venue for events http://cadw.gov.wales/daysout/stdavidsbishopspalace/?lang=en including bat walks. 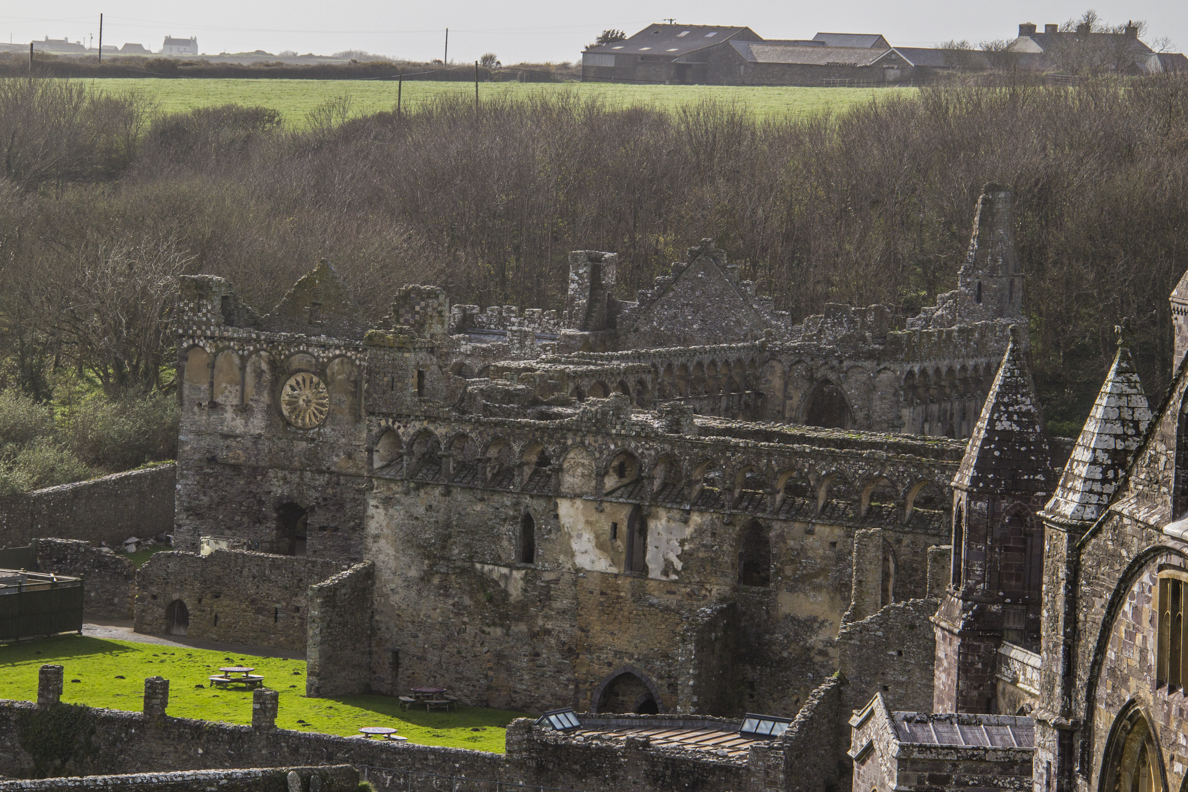 After exploring the palace, I set off to visit the birthplace of St David. I followed the road out of town and down to the sea. Here I discovered St Non’s Retreat that offers accommodation to pilgrims visiting the area. Near the retreat is the Chapel of Our Lady and St Non which was built in 1934. Below the retreat, in a field on top of the cliffs are the ruins of “St Non’s Chapel”: http://stdavids-peninsula.co.uk/historic-sites/st-nons-chapel-and-well/. According to popular belief this chapel is the birthplace of St David. It is said that following his birth a well sprang up nearby. This well is regarded as one of the most sacred wells and in Wales and the water is credited with miraculous and healing powers. When the well was fully restored and re-dedicated by the Passionist Fathers (owners of the retreat) in 1951as small shrine dedicated to the Virgin Mary was erected opposite the well. 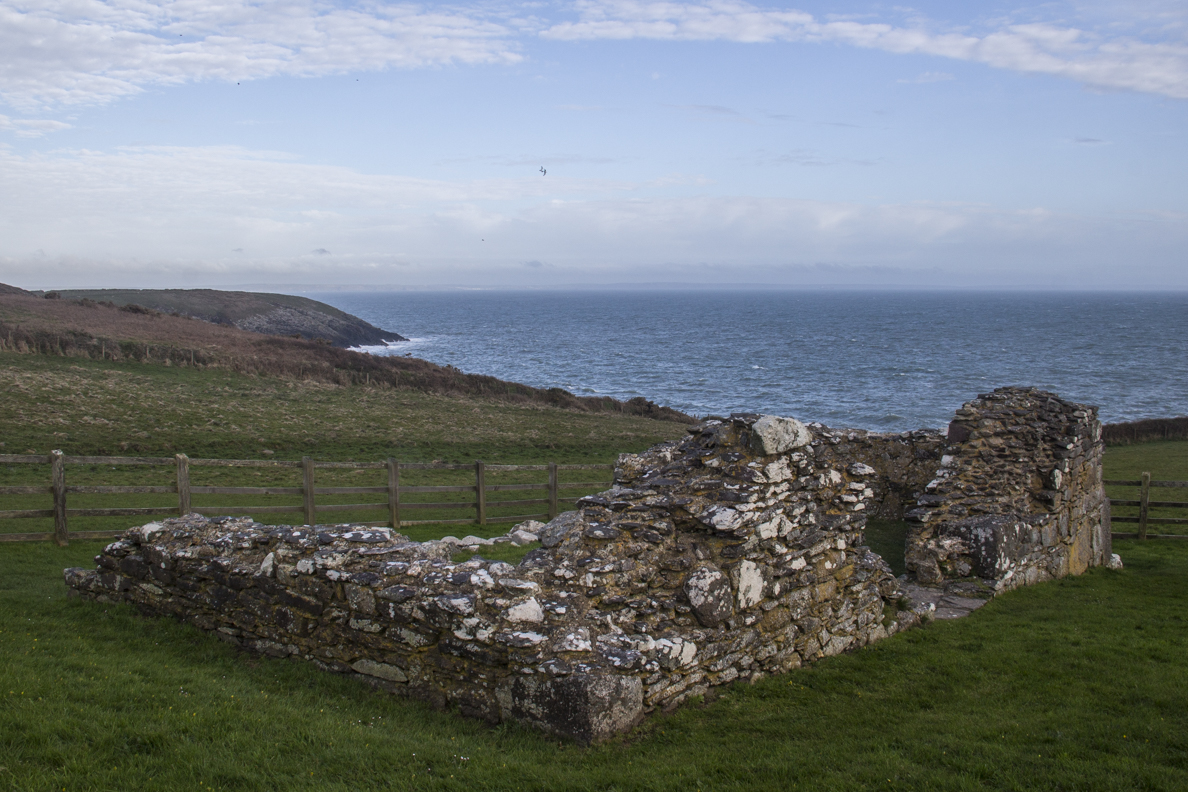 Rather than walk back into town along the road I joined the Coastal Path. It was wild and wonderful as I strode along enjoying the sea breeze and the sound of the waves crashing on the rocks below me. 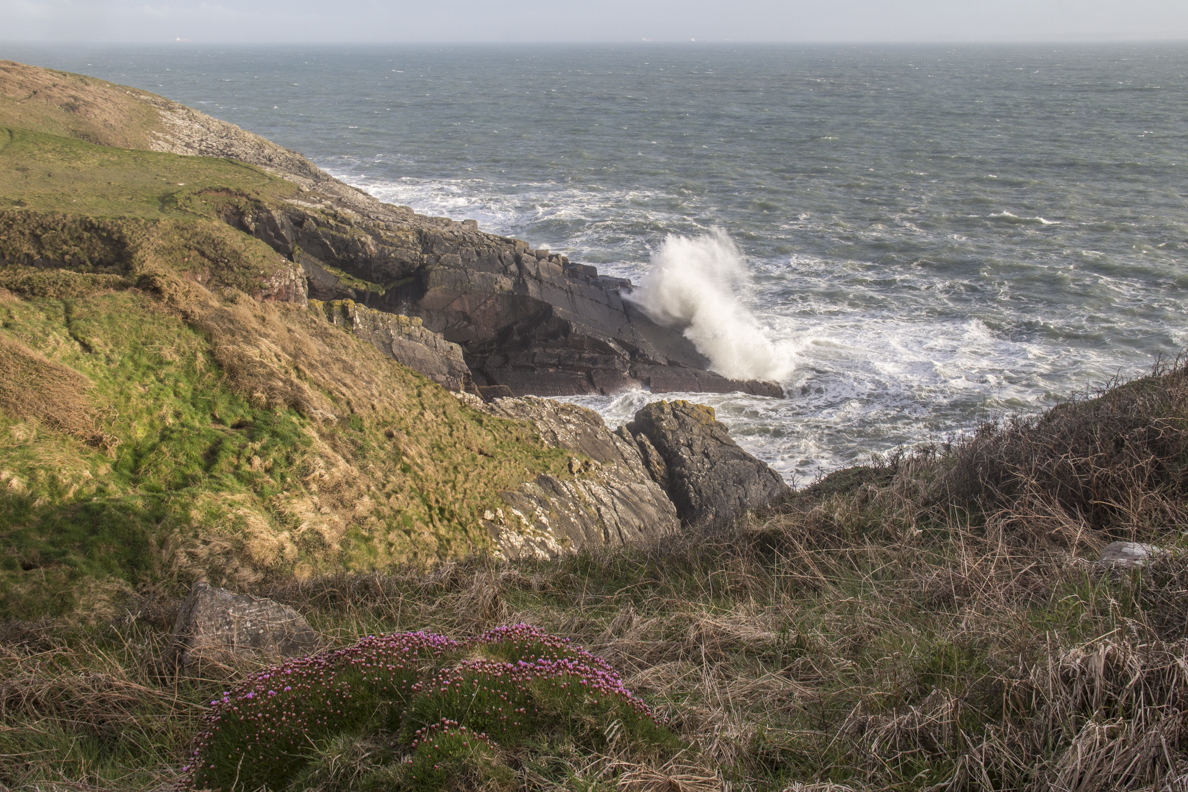 I followed the coastal path until I reached Caerfai Bay which I knew was at the end of the lane, Ffordd Caerfai, that would take me back into town. As it was high tide I could not see the sandy beach in this bay. This is the closest beach to the town and popular with both residents and visitors when the tide goes out. On my way back into town I met a couple who stopped to chat. I had discovered this is not unusual here and most people I passed shouted a cheery greeting which made me feel very welcome. 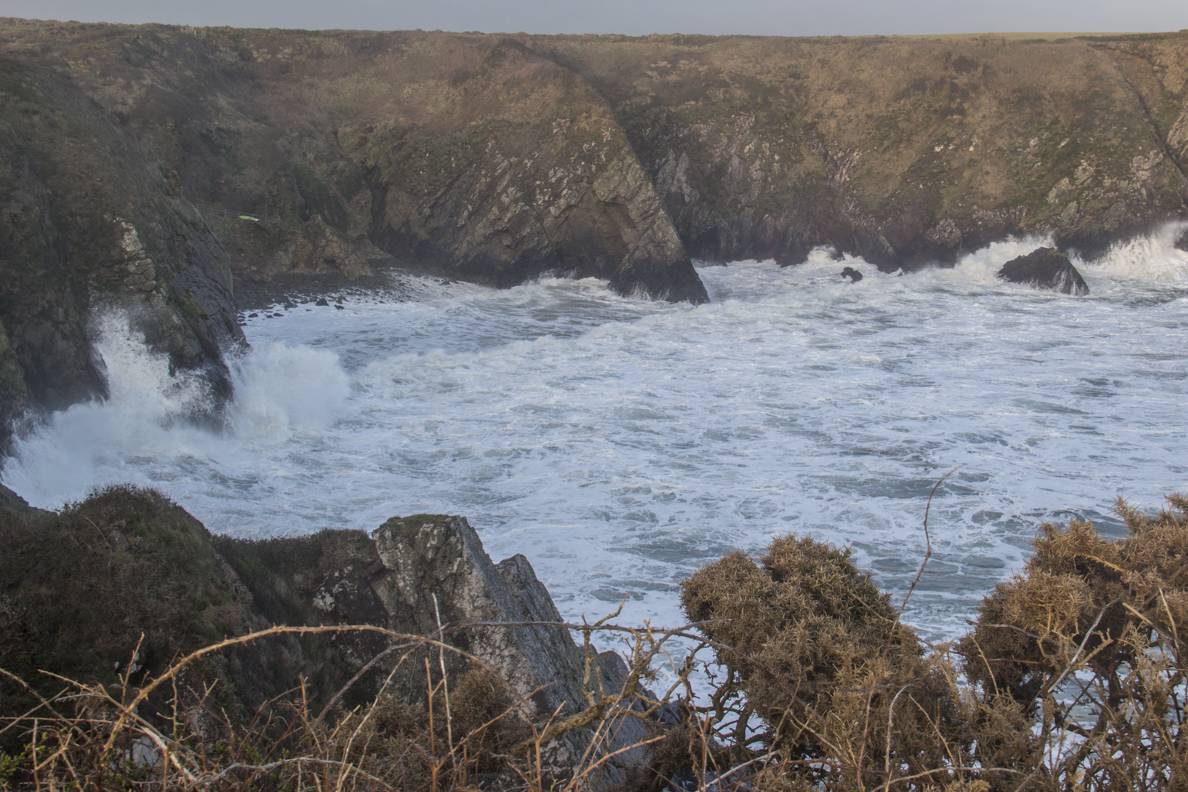 By then I was ready for something to eat and walked back into the centre to the Pebbles Yard Gallery and Espresso Bar. This brightly painted establishment is a combination of art gallery and coffee bar downstairs with a café above. There is also a courtyard with tables and chairs outside. 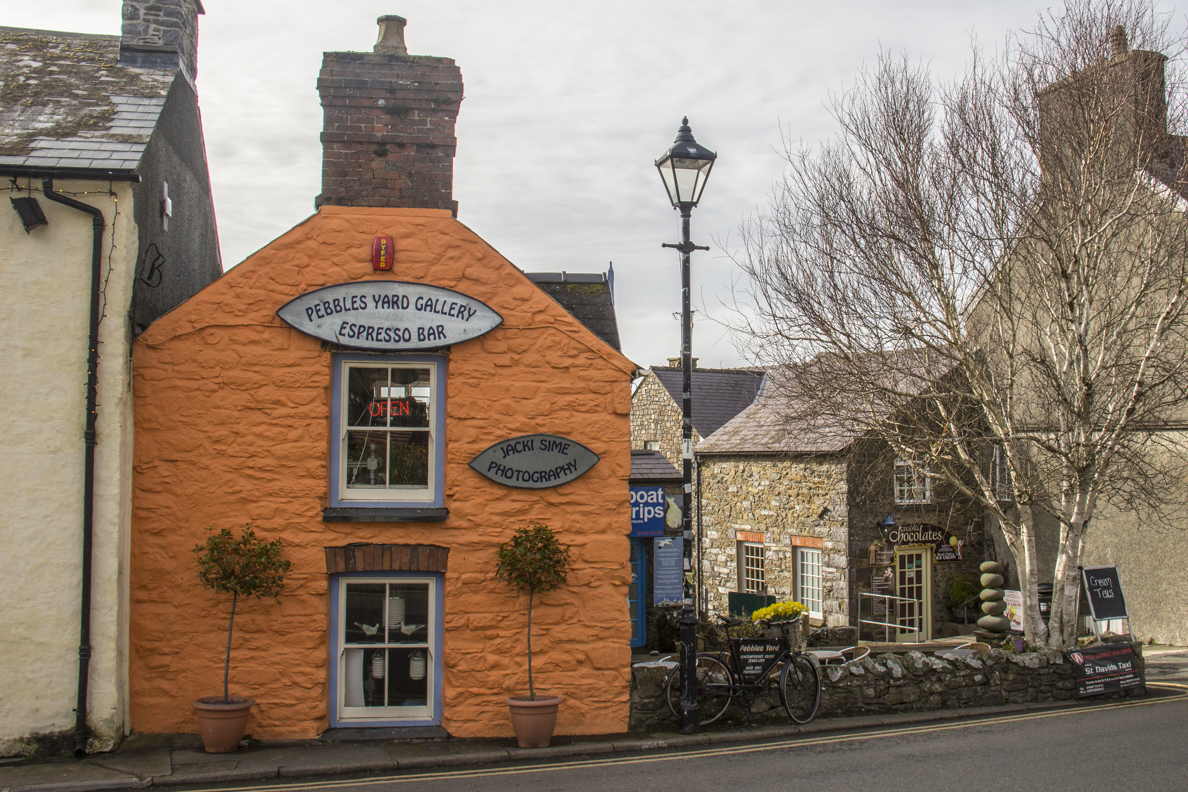 It was cosy and warm upstairs where I was lucky to find an empty table. I chose the rustic sandwich with a tuna filling. It was definitely rustic, very filling and very tasty. 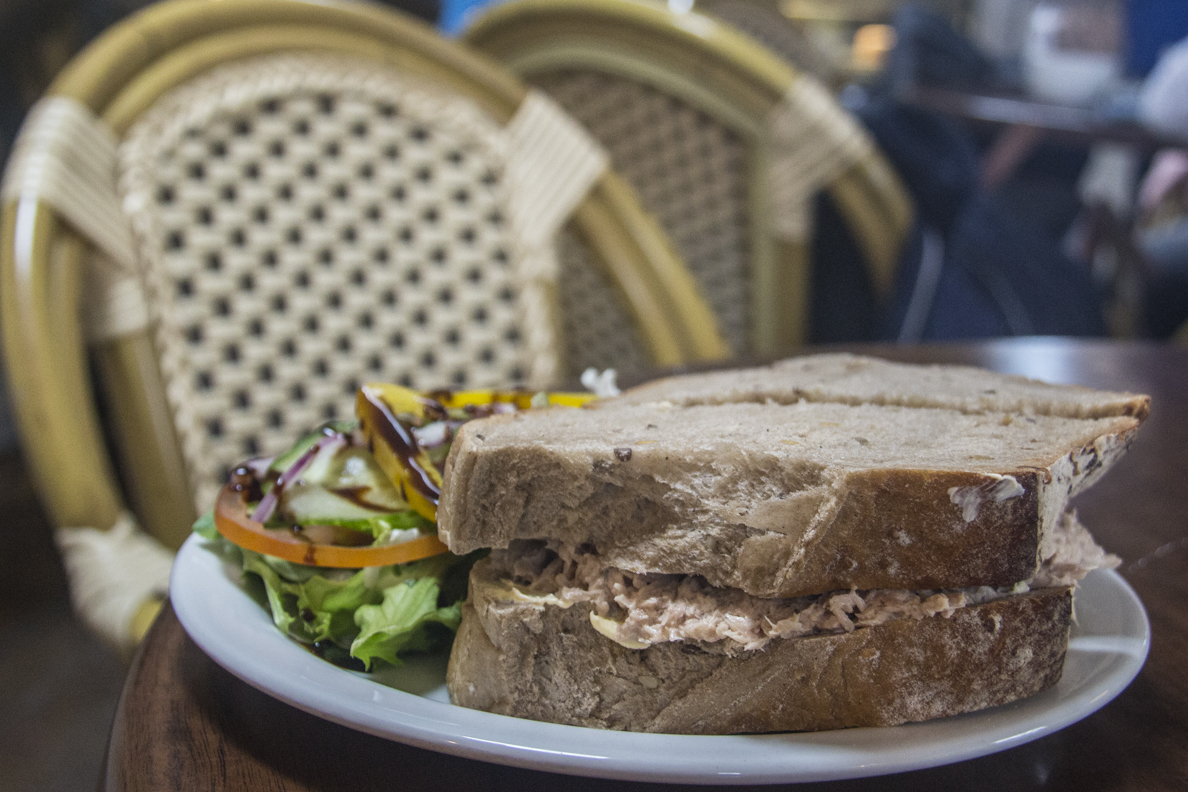 After I had eaten there was just time to browse the hand-made ceramics and textiles in the Goat Street Gallery before closing time. This gallery, in the centre of St David’s, is owned and run by Daniel Wright, ceramicist, and Amanda Wright, textile maker and housed in a beautifully converted 1816 chapel. The gallery features the works of international, local and new fine artists and craftspeople, selected for changing exhibitions as well as regularly stocked work. Visitors can watch artists at work and fun and explorative artist-led workshops are also available. 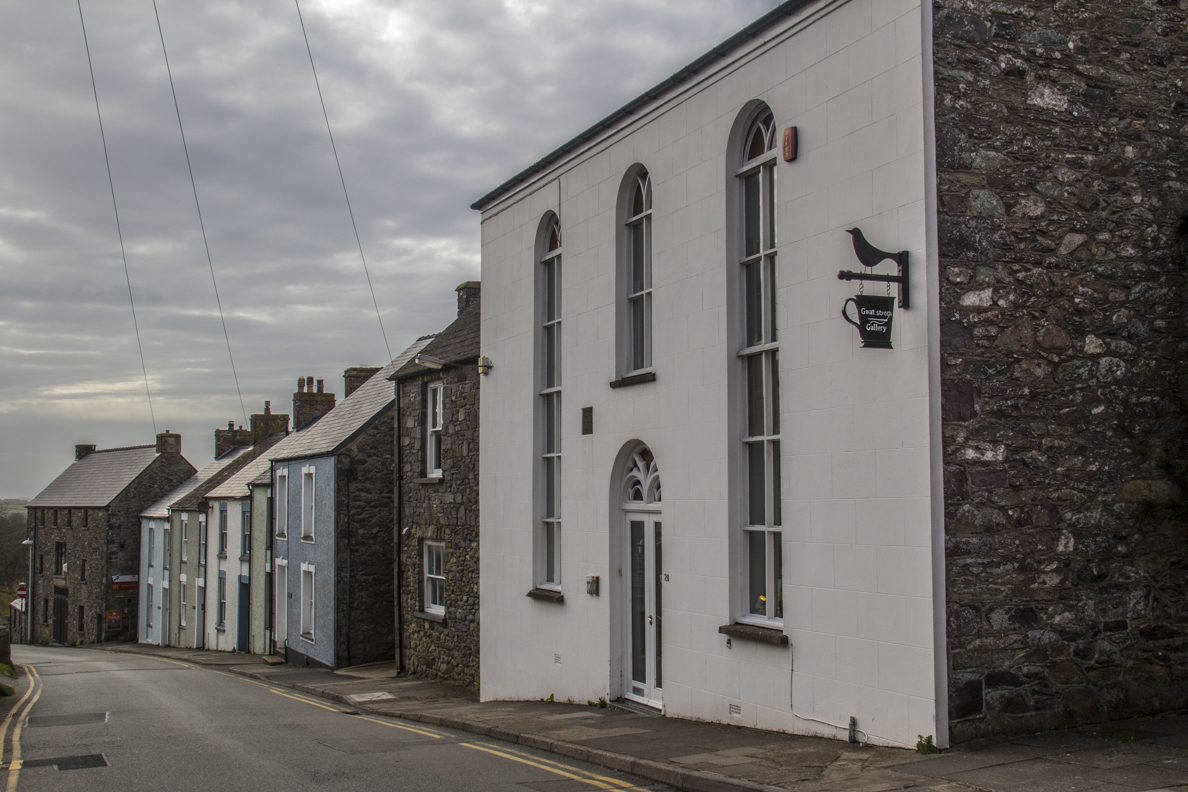 It was unfortunate that the sea was too rough for me to take a boat trip around Ramsay Island to view the wildlife but I doubt I would have had time anyway as there were so many other things to do. I will just have to make time on my next visit.

“Twr y Felin Hotel”:https://www.twryfelinhotel.com/ is ideally situated close to the city centre and a short stroll to the sea. The rooms are beautifully furnished and include the unique Tyddewi (Windmill) Suite situated on three floors inside the old windmill. The hotel incorporates an art gallery and its restaurant Blas Restaurant offers very fine dining using local produce. A very special hotel in a lovely setting.