Exploring the Historic Waterways of Winchester in England

As I made my way across the water meadows of the River Itchen I found it difficult to believe I was not far from the city centre of Winchester. I was surrounded by leas of lush grass and thickets of trees. Beyond these I occasionally glimpsed the sparkle of water in the river. I was following in the footsteps of the poet Keats who found inspiration walking here when he stayed in Winchester. Once upon a time, thousands of years ago, the River Itchen flowed through the centre of what is now Winchester. The Romans, skilled in engineering, altered the river flood plain and diverted the River Itchen further to the east. They also drained the land so that the town could be extended eastwards, allowing them to build over the former marsh. Just ahead of me, bathed in sunshine, were the beautiful medieval buildings of St Cross Hospital and the Almshouses of the Noble Poverty. 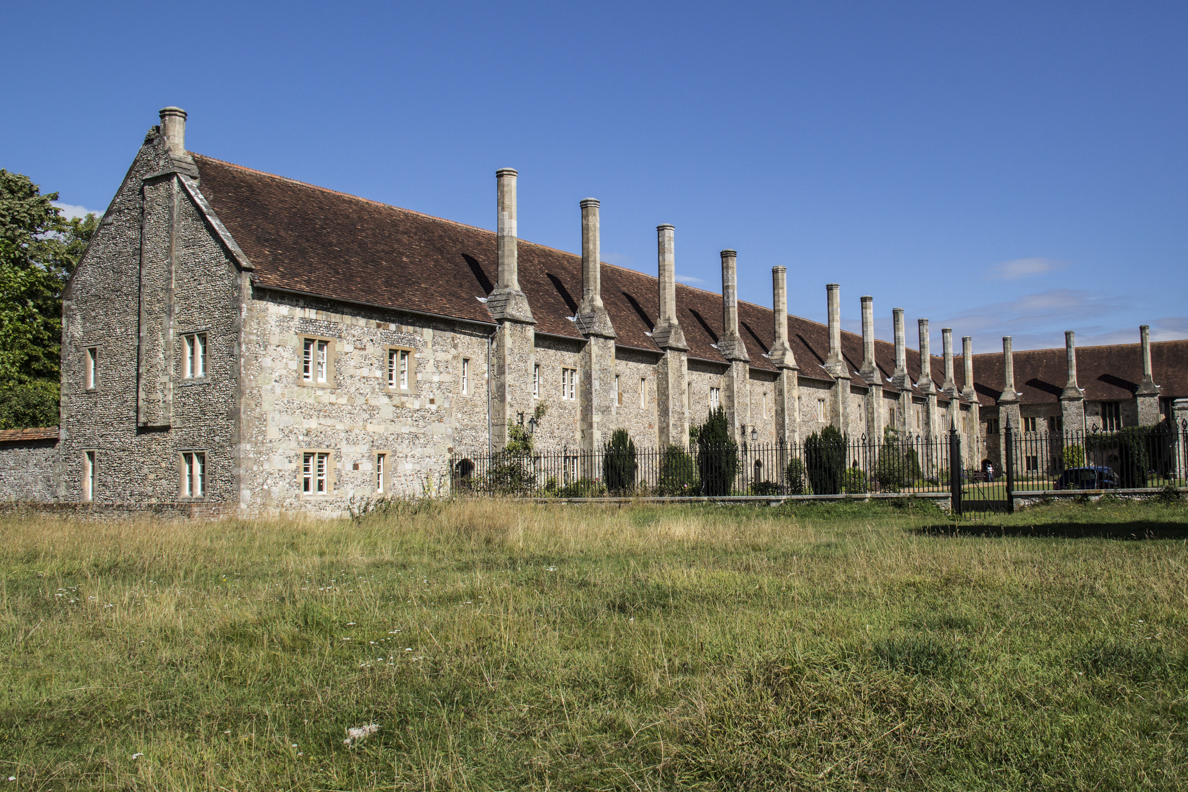 St Cross is not a hospital in the sense we understand the word today. The word derives from hospitality, the offering of food and shelter to those in need. Its Grade 1 listed buildings, dating from 1132, include the oldest almshouses still operating as such. Today, they provide individual, private apartments for a community of twenty-five elderly men. These men are known as Brothers and they wear black or red gowns and a trencher hat to attend a daily church service and on other formal occasions. The church, an impressive Norman church is situated in the inner quadrangle of the Hospital. Close to the church are a classic medieval hall, a kitchen and a Tudor cloister. Another ancient hall in the outer quad houses a tea room (open in the summer) and the Porter’s Lodge Shop. Visitors are welcome to this place of privacy and retreat. 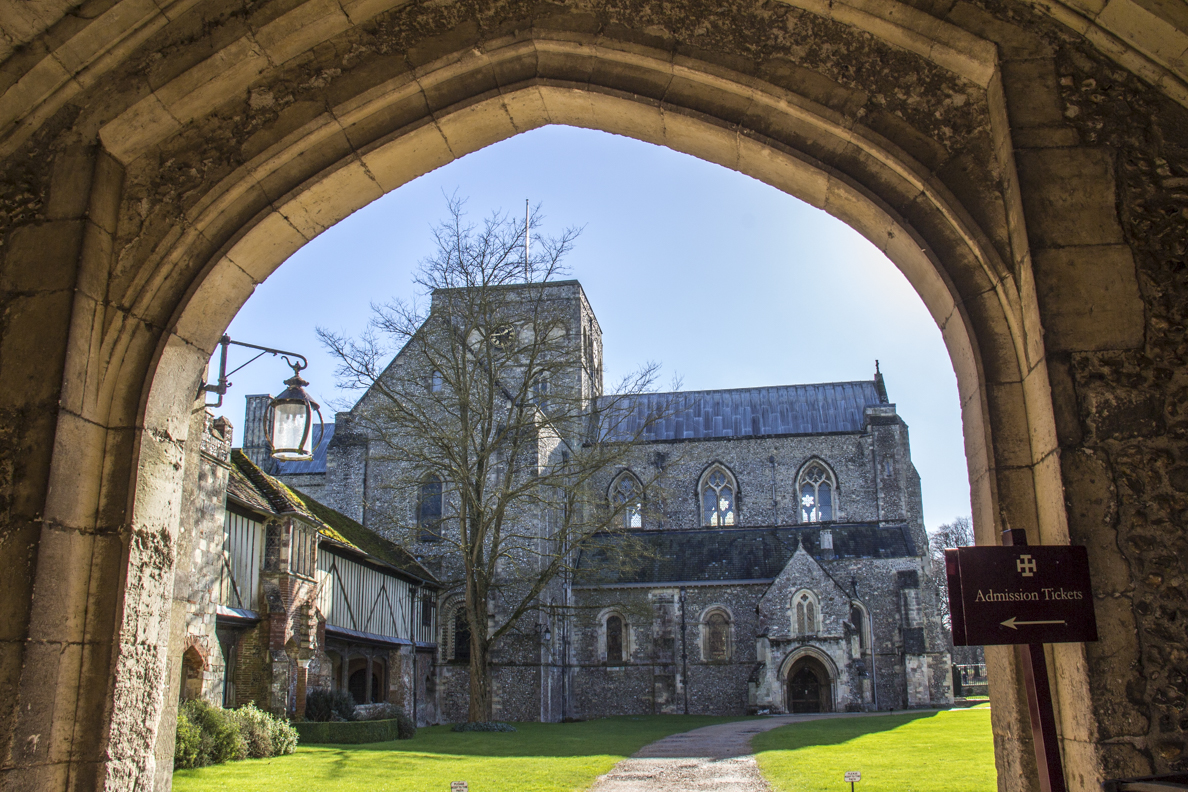 I had two possible routes from here into town. Did I walk over Saint Catherine’s Hill overshadowing the meadows or did I meander along the river bank? The hill presented more of a challenge but offered panoramic views of the town. I opted for a gentle stroll and was soon passing by pretty cottages and stopping to admire both the buildings and their well-stocked gardens. In the past the River Itchen has been vital to the economy of Winchester. In particular, since the end of the twelfth century its waters have been used to power fulling and weaving mills and later, in Victorian times, corn mills. Poignant reminders of these times, such as disused locks and old weirs, were also visible from the path I was following. 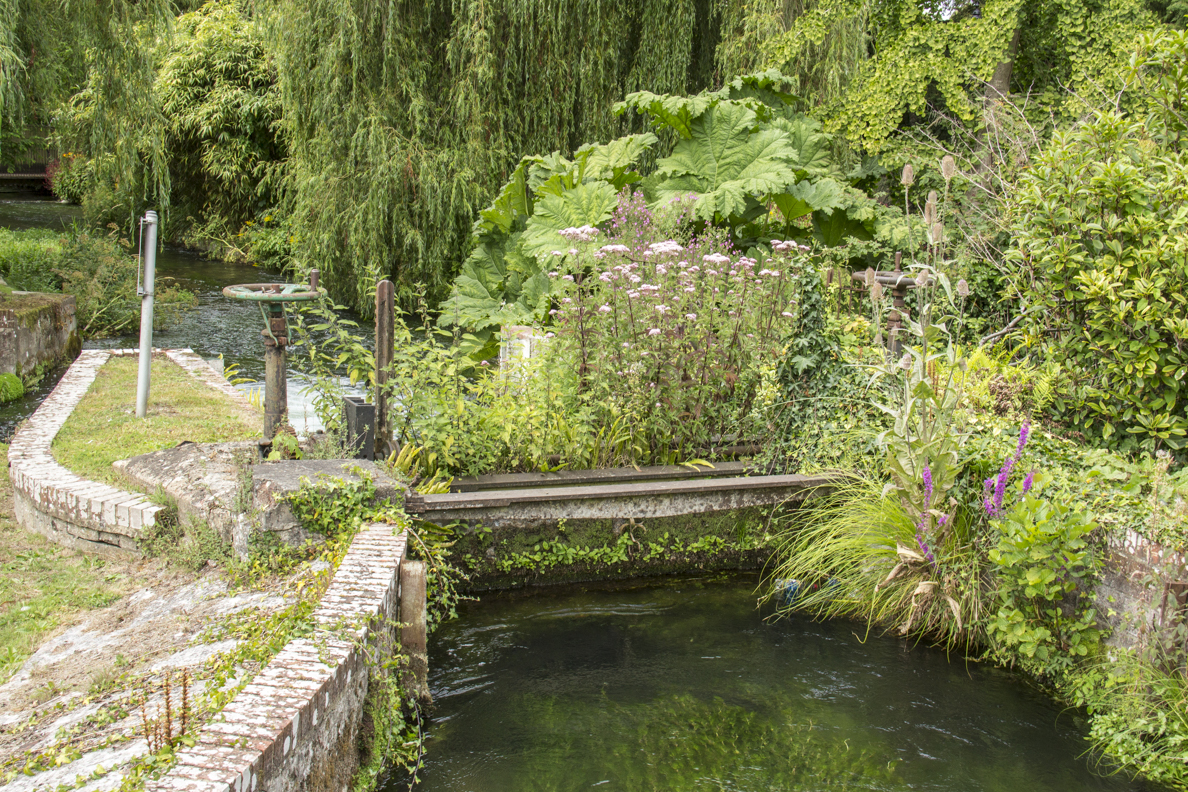 During the lull in between these two activities the river was used to transport goods for trade purposes. To make the river navigable improvements to the river were authorised by an Act of Parliament in 1665 and the Itchen Navigation Canal was finally completed in 1710. This ten-mile canal system bypassed the non-navigable sections of the river. The Navigation Canal was important for the transport of goods but as it was only suitable for shallow barges it was never subjected to heavy traffic. When the London and Southampton Railway opened in 1840 the sharp decline in traffic resulted in its closure in 1869. Today the canal is a haven for walkers and wildlife thanks to the Itchen Navigation Heritage Trail Project which incorporates some of the old tow paths. Approaching the city centre, at the head of the Itchen Navigation Canal, is the Wharf Mill, once the city’s principal grain mill. There has been a mill on this site since the twelfth century, but the present building dates from 1885. The building has been converted into flats. 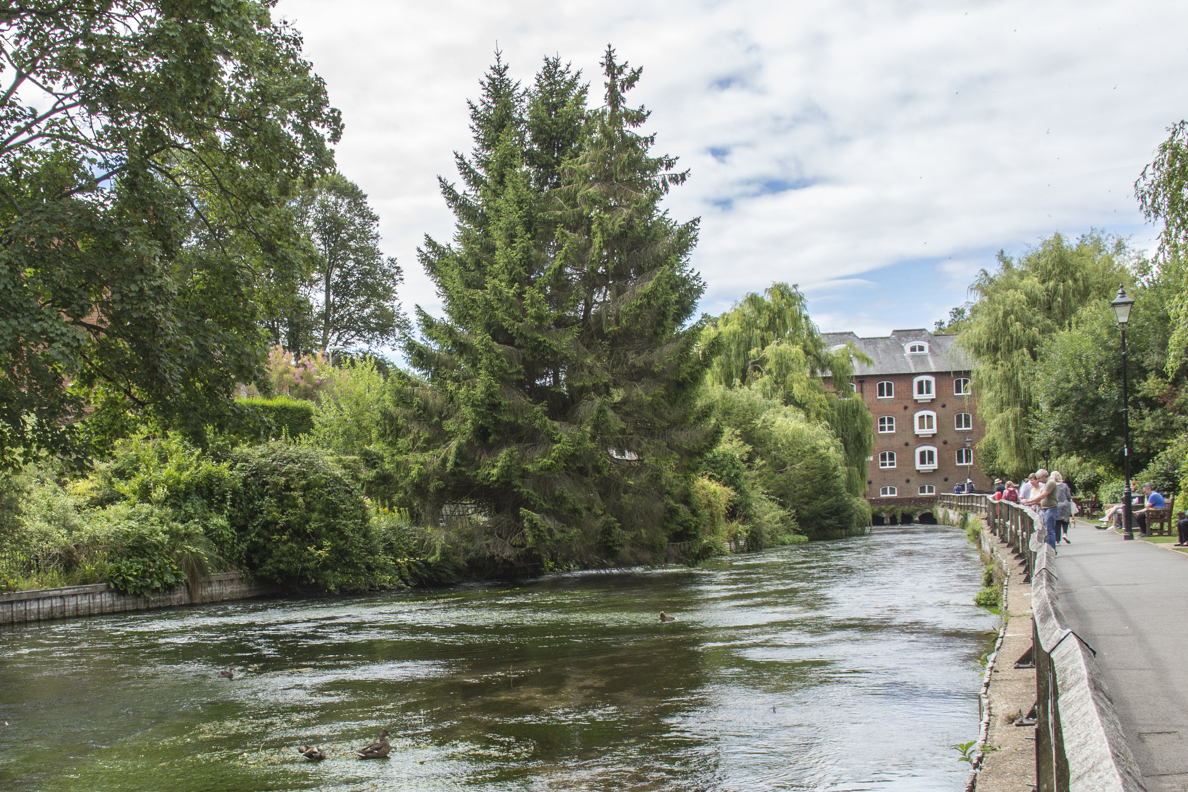 Another old mill, Abbey Mill, a small water-powered corn mill has been converted into a tea room with the addition of a portico. It is situated in the beautiful Abbey Gardens and Abbey Mil These gardens were originally part of the site of St Mary’s Abbey originally known as Nunnaminster. This abbey was once one of the largest monasteries in England. It was surrendered to Henry VIII during the Dissolution of the Monasteries which began in 1534 and most of the monastic buildings were demolished then. In 1554 Queen Mary Tudor gave the site to the City of Winchester to celebrate her marriage to Philip of Spain in the city’s cathedral. The land was divided into two parts. A town house with formal gardens was built on the eastern part. Both of these still survive today. Abbey House is now the official residence of the Mayor of Winchester and the Abbey Gardens are open to the public. In 1873 the City’s Guildhall was built on the western section and scattered remains of St Mary’s Abbey are visible at the back of this building. The Abbey Mill Stream passed through the monastery to feed its fishponds and power the Abbey Mill. Today it runs alongside the gardens to the old mill. 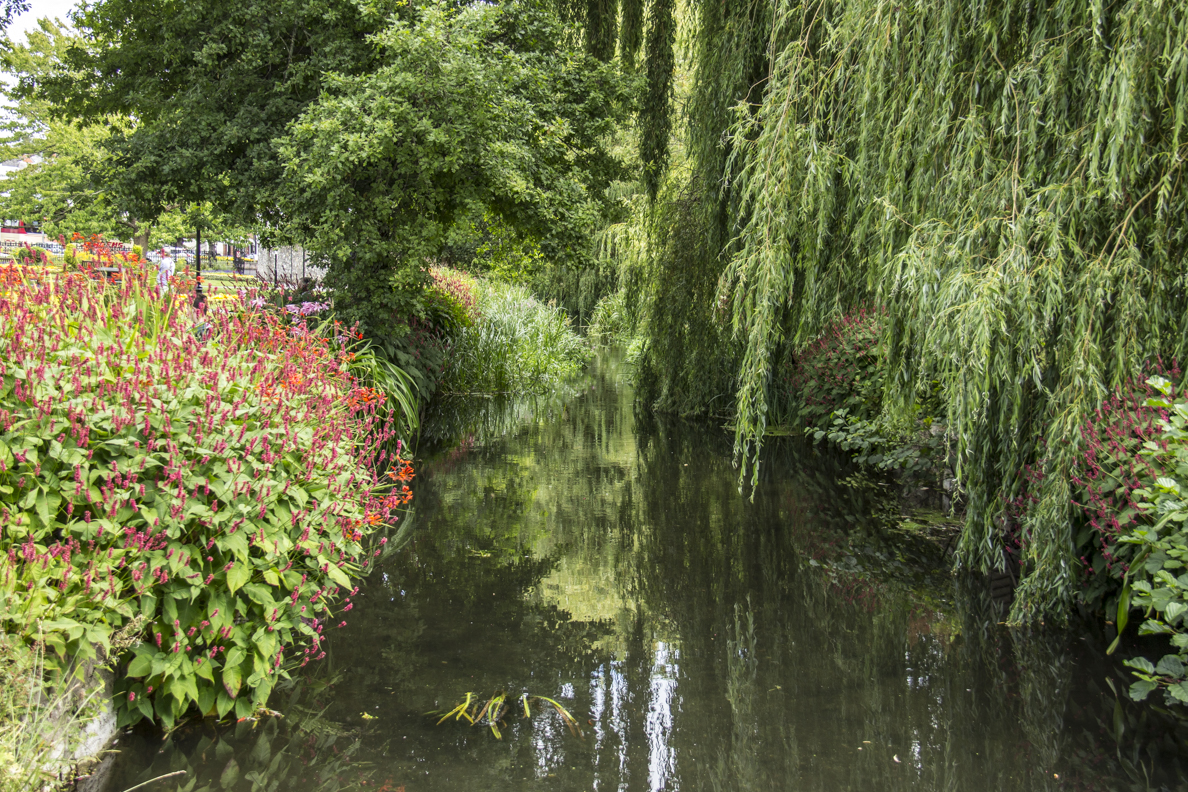 Close to the city centre the River Itchen flows past Wolvesey Castle, also known as the Old Bishop’s Palace. This was where the rich and powerful medieval bishops of Winchester, relations and advisers of kings, once lived. Queen Mary 1 and Phillip of Spain dined in the castle on their wedding day. Now in ruins it stands in the grounds of the new Bishop’s Palace and is open to visitors. At the end of the tow path the river flows under the City Bridge also known as Soke Bridge. There has always been a bridge here, the bridging point of the River Itchen – the point, the first place where the river was narrow enough to build a bridge across it. The first city bridge was built by St Swithun during the ninth century. The present bridge, designed by George Forder, was built in 1813 and is close to the site of the Eastgate, once a main entrance to the city. 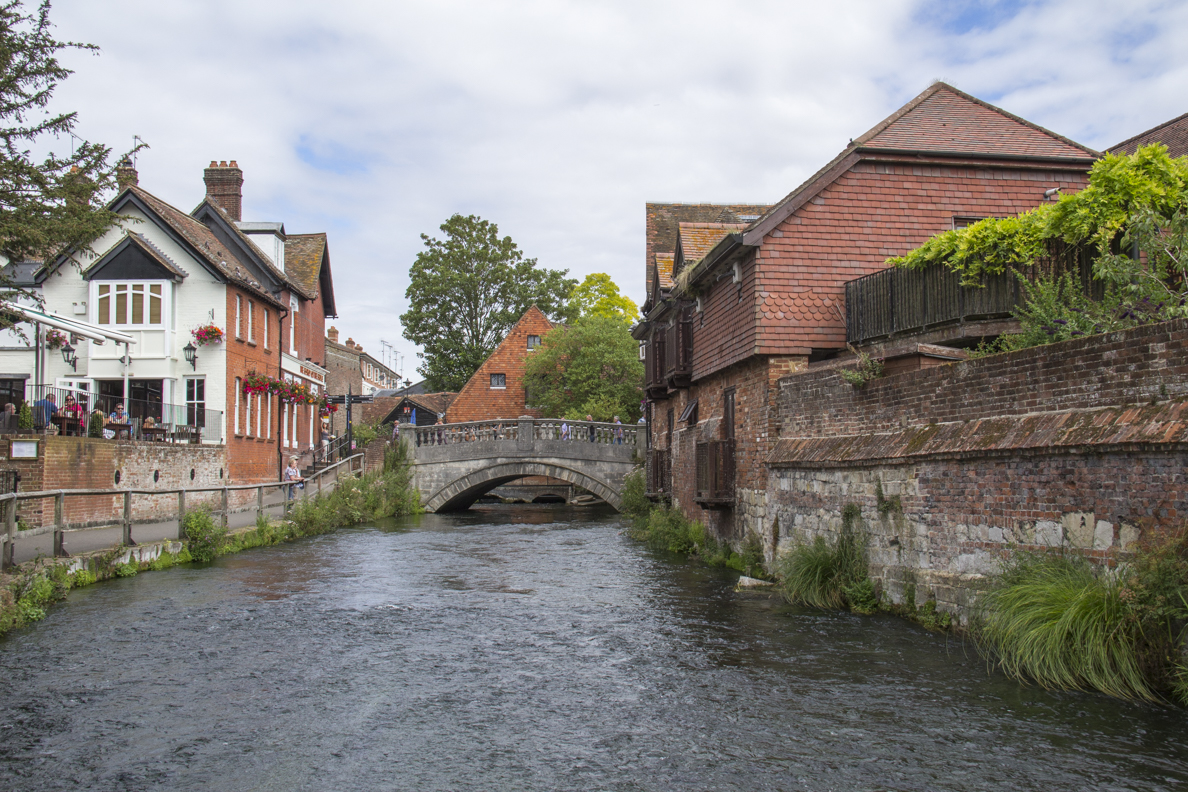 Standing on the City Bridge I had an excellent view of the City Mill and I was thrilled to see the water churning in its mill stream fed by the waters of the River Itchen. This meant the mill, probably the oldest operational urban corn mill in England, was grinding flour. It is believed there has been a mill on this site since at least Saxon times and it was mentioned in the Domesday survey of 1086. In 1471 the mill was recorded as being derelict due to a series of bad harvests, the loss of the wool trade to Calais and London replacing Winchester as the capital of England. Henry VIII had taken the mill into Crown ownership in 1539 but his daughter, Mary Tudor, gave it back to the city in 1554. Her gift was partly as compensation for her costly wedding in the city’s cathedral and partly in response to a request for financial help from the city. 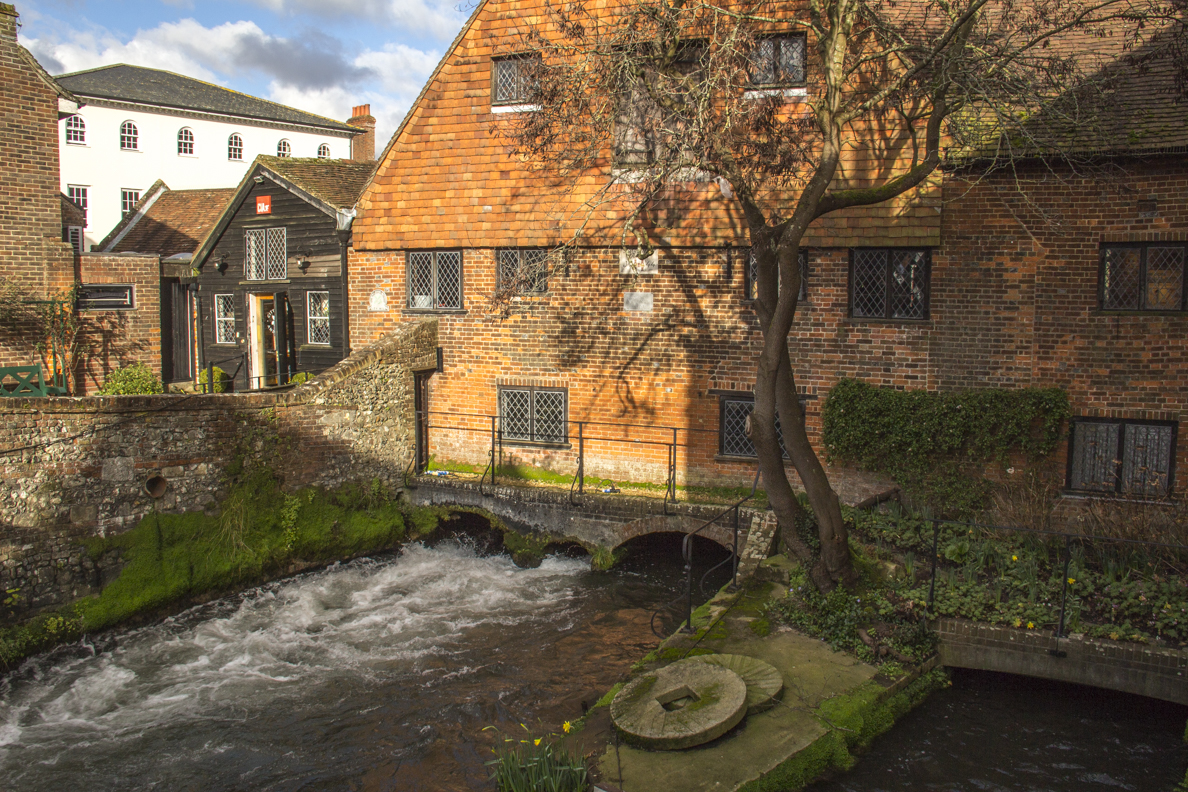 In 1743 the mill was rebuilt but incorporated a lot of the timbers and fabric that dates back to the fourteenth and fifteenth centuries. For most of the nineteenth century the mill operated profitably in private ownership but closed at the beginning of the twentieth century. It was used as a laundry during the First World War and then put up for sale. A group of local benefactors bought it and gave it to the National Trust. Part of the building was subsequently leased to the Youth Hostels Association. The mill itself continues to delight visitors by regularly grinding flour which can be bought in its shop. As this was the end of my walk I had plenty to time to peruse the small museum and watch the waterwheels in action. 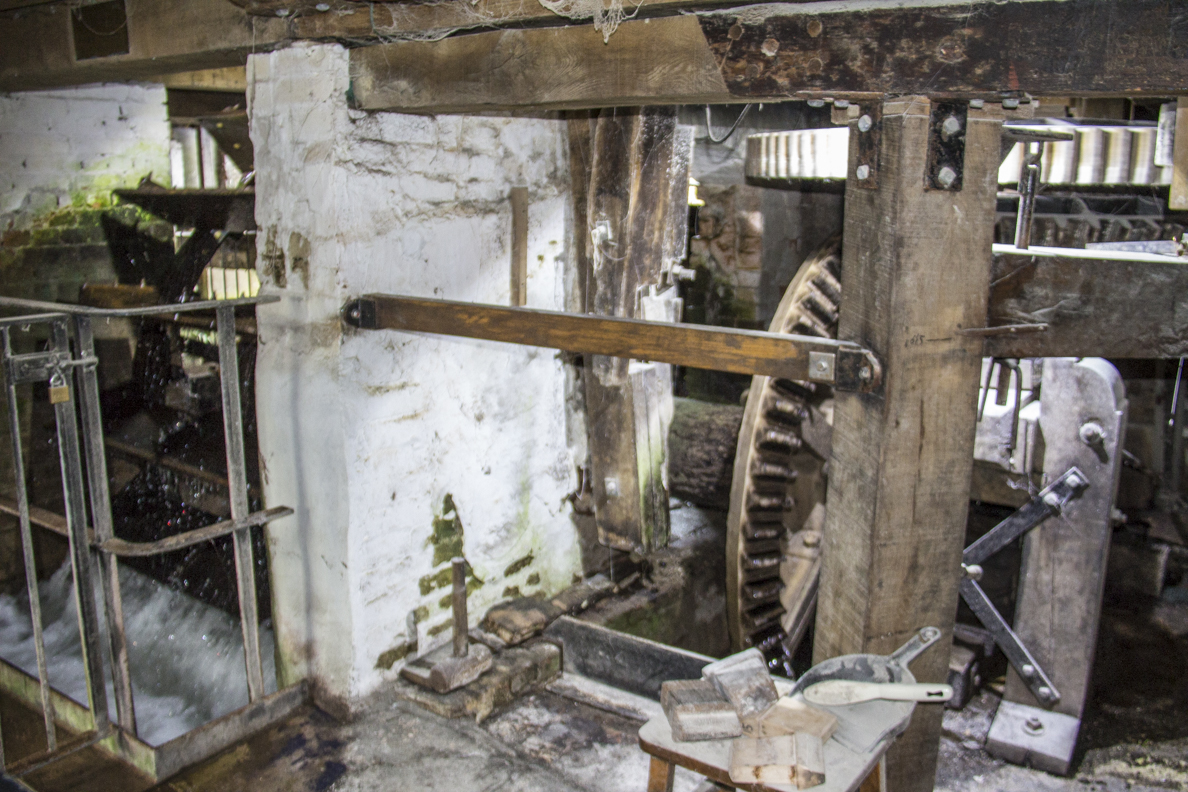 Just off the M3 Winchester is easily accessible by road and there are regular train services from London and Manchester.