Osborne: The Home that Albert Created for Victoria

Victoria was Queen of England and Albert was her Prince Consort when they decided they needed a home for their large family away from public eye. Their search took them to the Isle of Wight a place that Victoria already knew and liked. Improved railway communications meant it was possible to travel between London and the island in four hours. It was here they found the Osborne estate perched on a hill on the outskirts of Cowes with parkland rolling down to a private beach. Victoria wrote ‘it is impossible to to imagine a prettier spot – we have a charming beach quite to ourselves – we can walk anywhere without being followed or mobbed. However, the house on this estate was considered to be too small for their growing family. So, it was decided that a new house should be built. This was Albert’s opportunity to indulge in some of his passions, architecture and landscape gardening being just two of them. In 1845 the Queen bought the estate using her privy purse and Thomas Cubit, the London builder and creator of entire suburbs was engaged to replace the existing house with one built specifically for the Royal Family. Its Italianate design, an inspiration of Albert’s, came known as the Osborne style which was imitated throughout the British Empire. 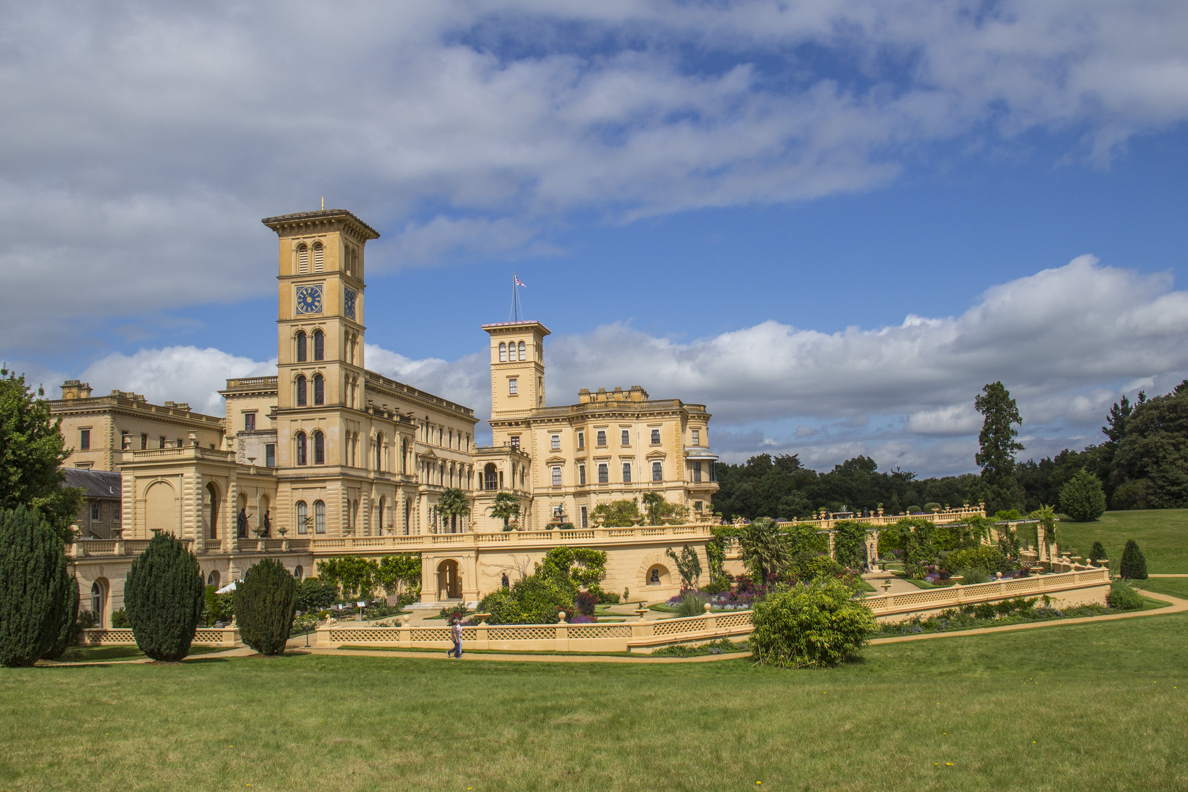 On my first visit to Osborne I had wrongly assumed that two hours would be sufficient – a full day barely does this magnificent place justice. Queen Victoria lived here for fifty-five years with her family. She found solace here after Albert died in 1861. When Victoria retreated to Osborne the house was modified to entertain visiting ministers and foreign royalty. The most notable change was the addition of the Durbar Wing featuring the Durbar Room during the 1890s. Its extraordinary Indian interior displaying a collection of Indian artefacts complementing Victoria’s title of Empress of India and reflecting her love of India a place she was never able to visit. So India came to Victoria. After the death of her beloved John Brown who was brought to Osborne in 1864 and died nineteen years later she appointed an Indian Abdul Karim, as an advisor for visiting dignitaries from India and Pakistan. There is a portrait of Abdul in the Durbar Corridor amongst the unique collection of Indian portraits on the walls that includes some of Victoria’s Indian servants. Rudolf Swoboda who painted these portraits was also commissioned by Victoria to go to India to sketch different nationalities – these portraits are also displayed in the collection. 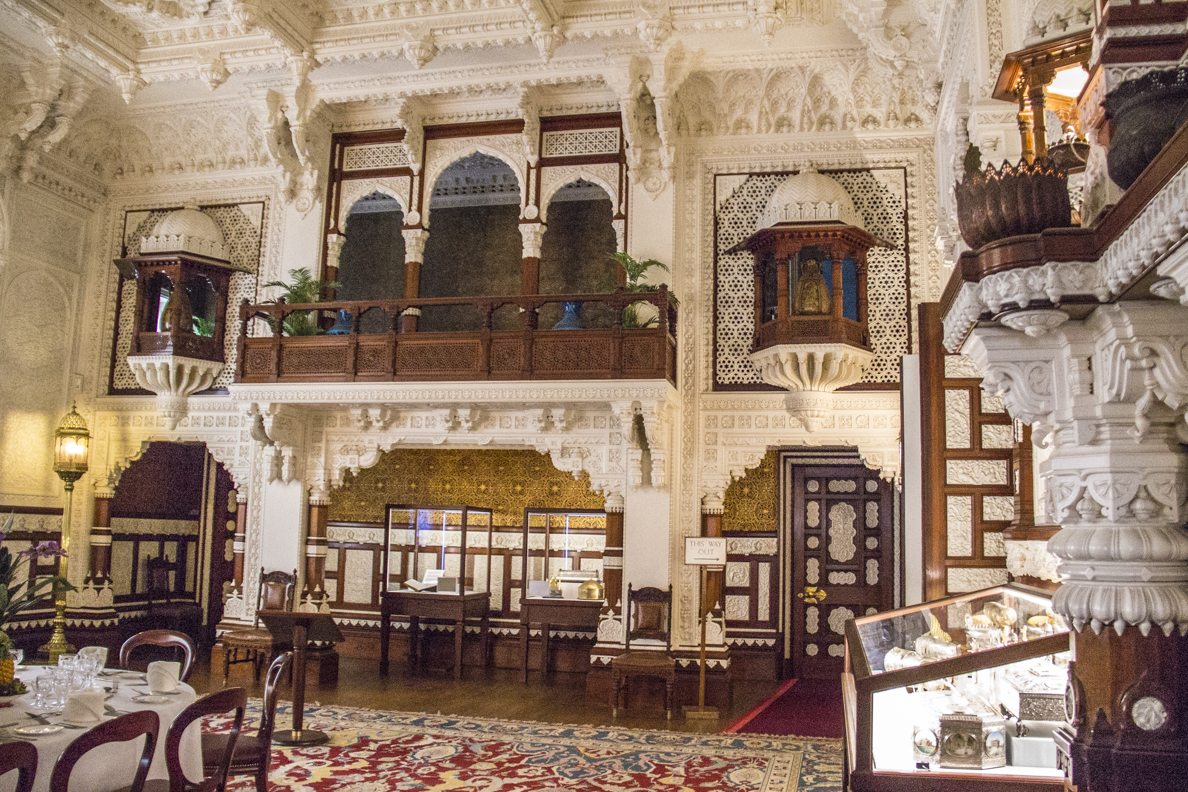 Following the death of Victoria Osborne House was closed, never to be occupied by a family again. Osborne was a private possession of the Royal Family but new King, Edward VII, had no use for it. On his coronation day he wrote that Osborne was sacred to the memory of the late Queen and it was his wish that the people should always have access to the house which would be forever associated with her name. Some of the land and outlaying buildings were sold and the King appointed a committee to decide its future. This committee decided a Convalescent Home for Officers should be established in part of the house and the stables should be used for naval cadets. The Pavilion terrace was allocated to the convalescents and a nine-hole golf course was built otherwise few changes were made until the 1980s when it was transformed into a nursing home. In 2000 the rising costs of care forced it to close down. The Royal Naval College in the grounds had closed in 1921 as the navy was over-manned. The dormitories were demolished. English Heritage took over the management of Osborne in 1986 and since then has carried out external repairs, internal decoration and recreated the house as it was when Victoria and Albert lived there. In 2006 the Officers’ Quarters were transformed into a reception area. 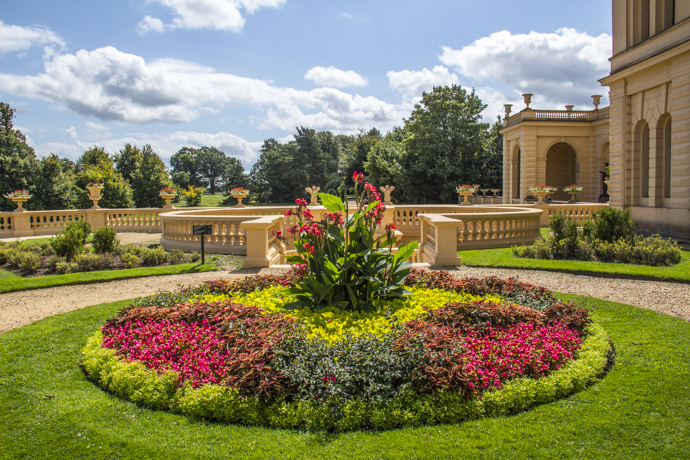 Inside the house the Main Corridor runs the length of the Pavilion, the middle section, that was built to house the family. This corridor is lined artefacts that were gifts to Victoria and Albert and they are still part of the “Royal Collection”: https://www.royal.uk/the-royal-collection. Half-way down the Grand Corridor is a statue of Queen Victoria in classical costume by John Gibson which the Queen gave to Albert for his birthday in 1849. In 1842 Albert had given Victoria a life-size statue of himself in classical armour for her birthday. It was commissioned by him from the German sculptor Emil Wolff and now stands at the top of the Grand Stairway. When the statue was finished in 1844 it was initially delivered to Windsor. Victoria called it ‘very beautiful’ but added ‘we know not yet where to place it.’ Two years later she recorded in her diary that the statue had been moved to Osborne. Albert himself thought his bare legs and feet were unsuitable for a statue placed in a room so in 1849 he commissioned a copy modifying the length of the tunic and adding sandals to the feet. This statue was displayed in Buckingham Palace. When the weather was inclement Victoria would use this corridor to exercise. 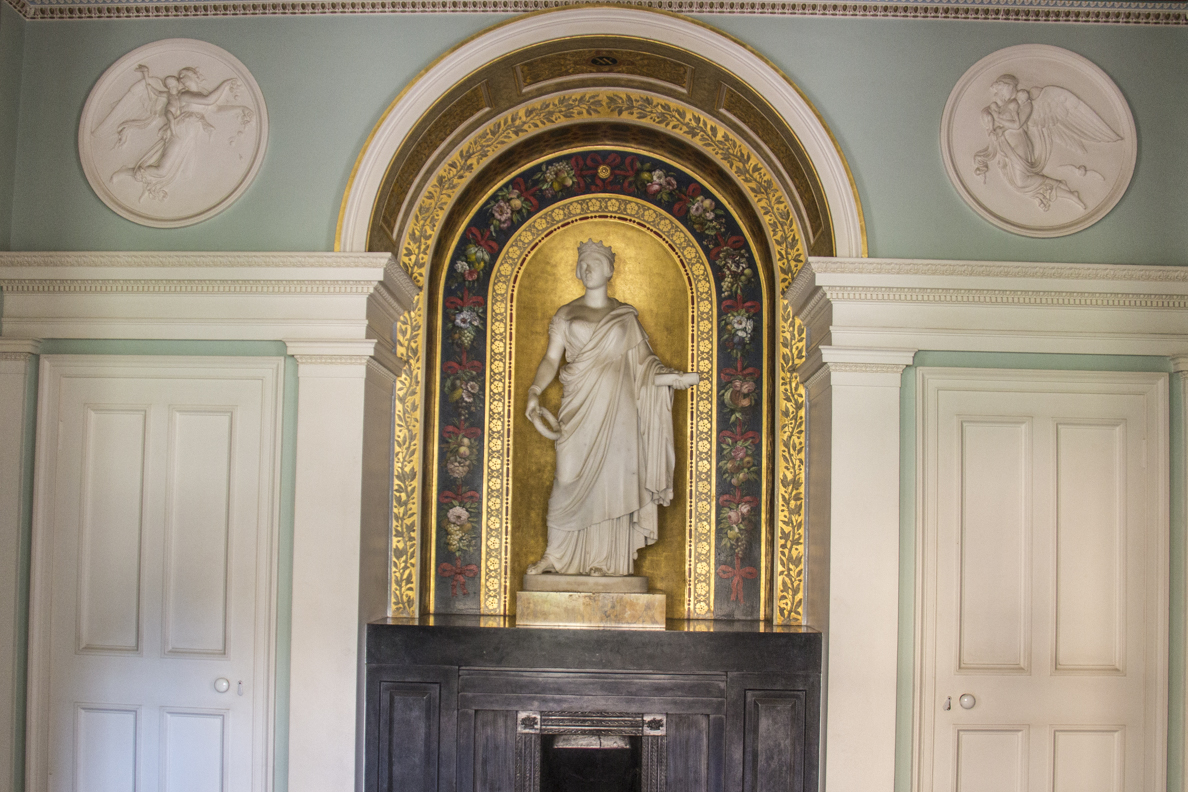 Some of the most private rooms of the house are open to the public including Victoria’s bedroom and the nursery. The nursery suite was immediately above the private apartments of Victoria and Albert. An unusual feature of a Victorian household where children were expected to be seen but not heard. But the royal couple wanted immediate access to their youngest children who remained in the nursery until the age of six. They were the responsibility of Lady Lyttelton, the superintendent of the royal children. The nursery, with its row of small beds and one swinging cot was very endearing. 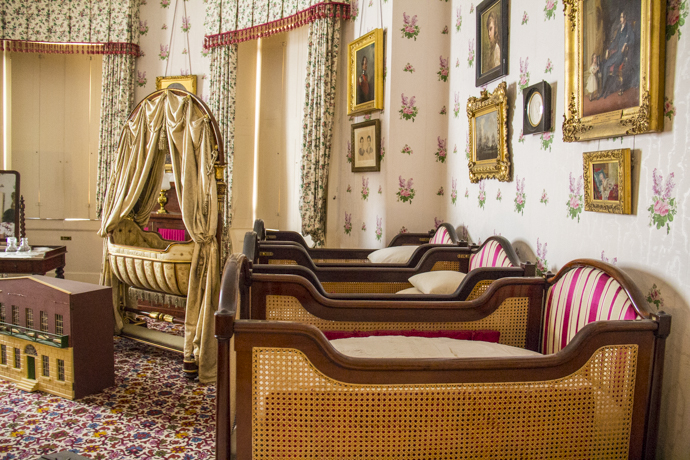 Victoria died in her bedroom at Osborne on 22 January 1901. This room is open to the public and has been preserved as it was when Victoria lived there. Including the post-mortem portrait of Albert on the headboard and the dates of the first and last time they slept together in that bed carved at the bottom of the bed. Victoria lay in state in the dining room at Osborne. There are two dining tables in this room, one at which the family ate and one for household staff. Victoria liked her food and she ate very quickly. Once she had finished a course all the plates were cleared immediately so her guests learnt to eat quickly. She lay in state here, under the large family portrait, until 1 February 1901 when, with great pomp and ceremony her coffin was loaded onto a gun carriage to begin the journey to Windsor. She was laid to rest next to Albert in the royal mausoleum at Frogmore, Windsor. 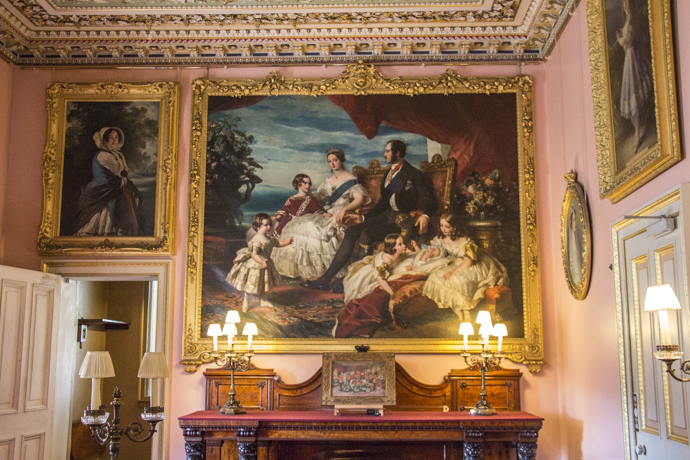 When Victoria and Albert bought Osborne estate it was immediately enlarged by the addition of Barton Manor (now in private ownership) to make Osborne self-sufficient. Albert was particularly keen that their children should learn about the production of food and commercial matters so they built the Swiss Cottage which they gave to their children. The children cultivated vegetables in the garden which they then sold to Albert. But they had fun there too in their miniature Victoria Fort and Albert Barracks. Albert encourage the children to make a natural history collection and a room was set aside for this. Objects came from all over the world and the collection grew so much that a separate building was required to house it. It is a lovely walk from the house to the Swiss Cottage and for those who do not want to walk a shuttle bus service is available. The Swiss Cottage is now a fascinating museum recreating the time the children used it. The gardens have also been re-established as vegetable plots. The Gazelle House in the grounds of the Swiss Cottage offers hot drinks, cakes and snacks with the opportunity to sit outside in the garden. 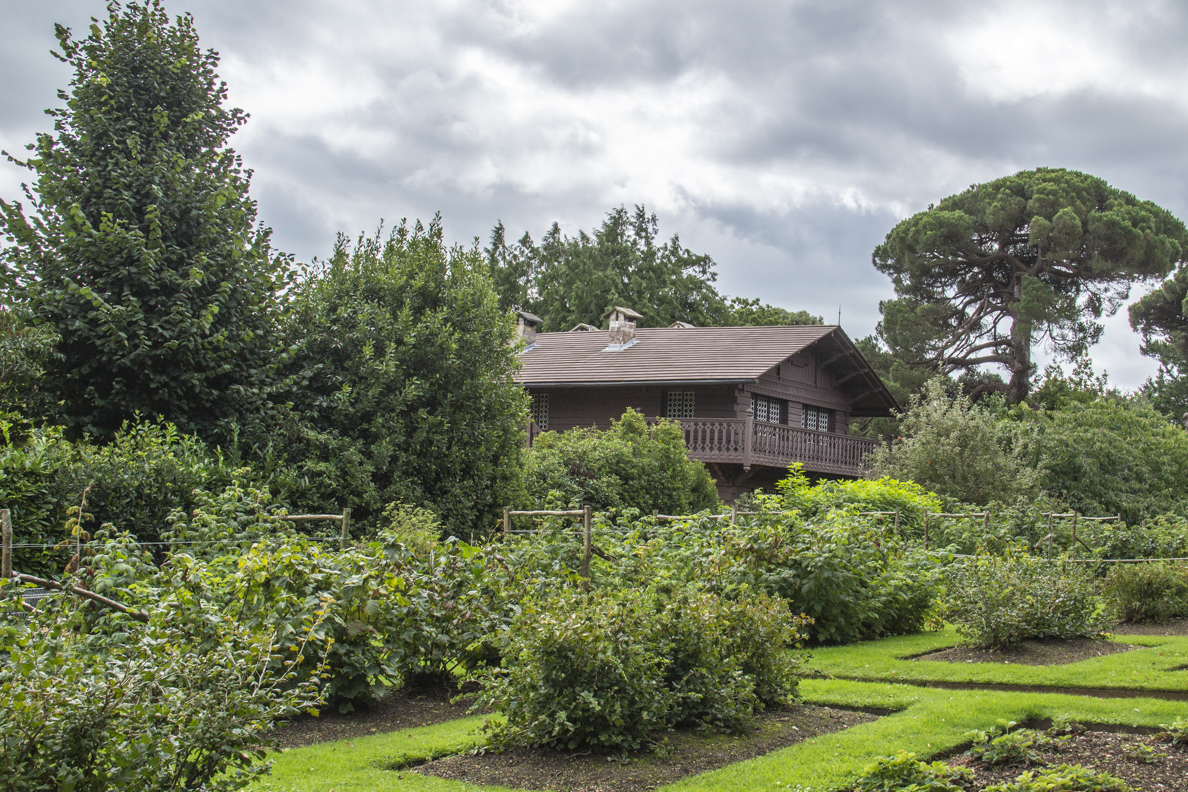 The whole family spent a lot of time on Pavilion Beach, their private beach. The children learned to swim there. Albert was a great believer in the benefits of bathing in the sea. He installed a bathing machine so that Victoria could bathe and keep her modesty intact. This bathing machine was rolled down to the beach and into the sea so that Victoria could get into the water without being seen. After Victoria died it was used as a chicken shed until it was moved in 1972. It was restored in the 1950s and returned to the beach in 2012. There is also an alcove or exedra on the beach which was built after Albert died. Victoria would often sit here writing letters or sketching and enjoying the sea view. Today visitors can wander down the tree-lined valley walk to the beach – or take the shuttle. There is plenty to do there including paddling, swimming or just relax and indulging in an ice-cream treat from the Pavilion Beach Ice Cream Parlour. 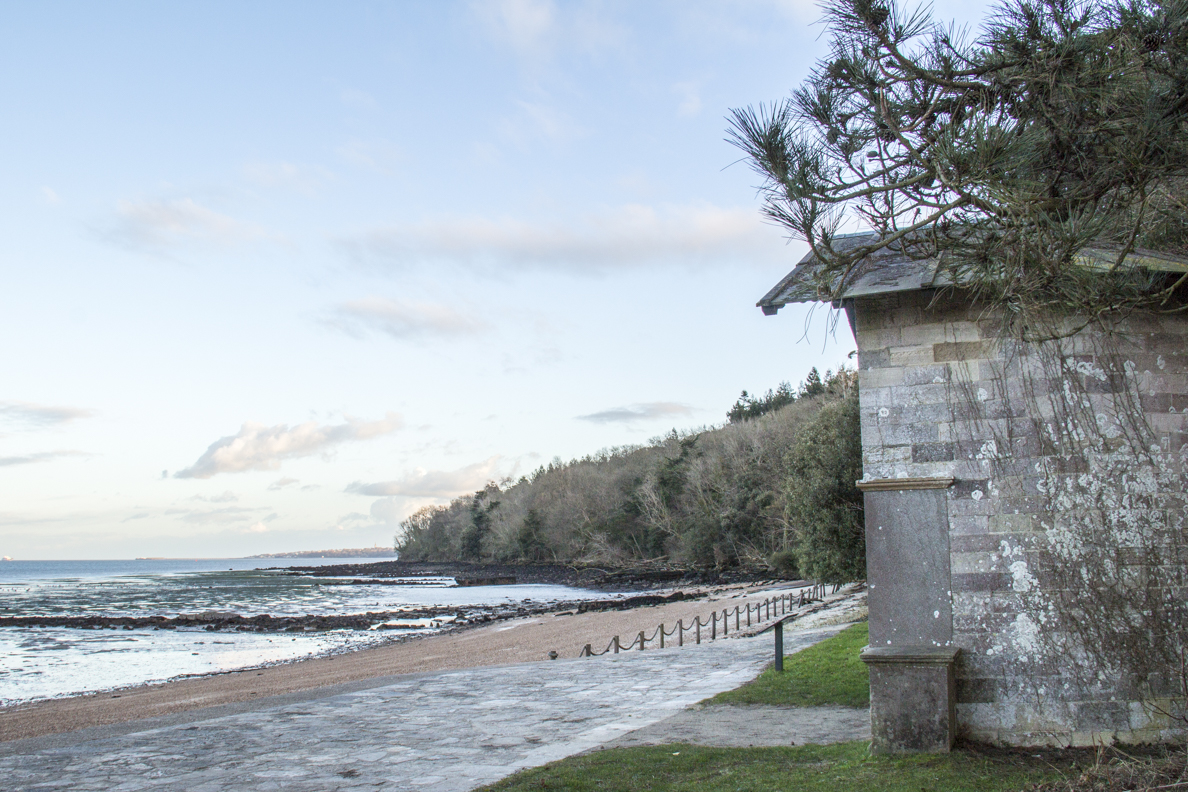 Osborne is a superb combination of history and a great day out.