Animals First in the New Forest Village of Brockenhurst

Despite the persistent drizzle I could feel the magic of the forest outside pulling me outside and away from my cosy hotel room. I was staying at the Balmer Lawn Hotel in Brockenhurst, a village in England’s famous New Forest. Ancient grazing rights are still upheld here and ponies, donkeys, sheep, cattle and deer graze freely throughout the forest. At the front of my hotel is a cricket ground and sheltering under the trees surrounding it I could see two small ponies. Shrugging on a waterproof jacket I set off to explore. 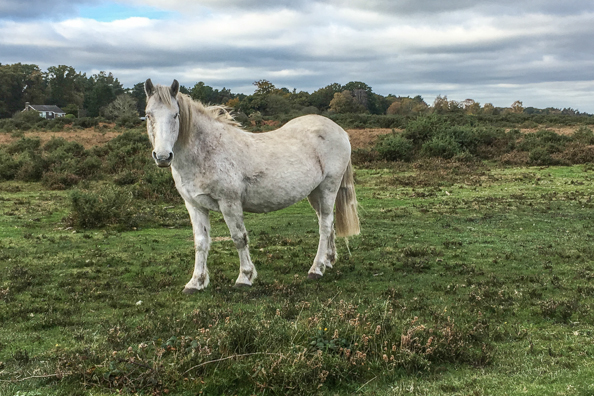 As it was too wet to go tramping through the woods at the side of my hotel I set off towards the village centre. The Lymington River flows past the Balmer Lawn Hotel and I paused on the bridge to watch the shallow water lapping around a shingle island. No doubt this is the place the locals called Brockenhurst Beach. I could imagine it would be popular in hot weather but in the winter it is abandoned to the animals and hardy walkers. When I returned later that evening I had the good fortune to glimpse a herd of deer taking refuge amongst the trees. It is no wonder William the Conqueror set aside the forest for hunting nine hundred years ago. He called it his Nova Foresta or New Forest. Centuries of grazing by deer, ponies and cattle have shaped the present landscape that is now preserved as the New Forest National Park. 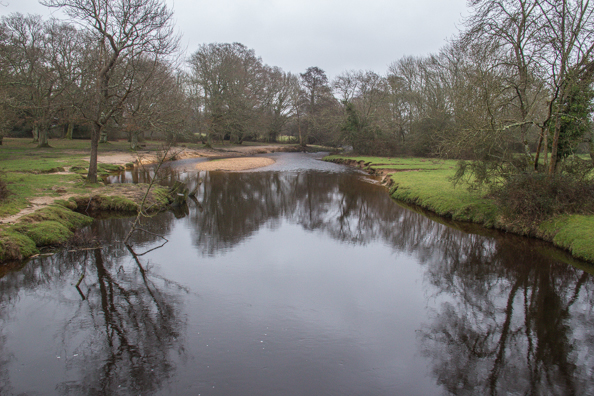 Just beyond the river I crossed an area of common land, bereft of animals as recent heavy rainfall had turned the whole area into a small lake. There is a lot surface water in the area around Brockenhurst and the land floods easily. One theory relating to its name is that it derives from a similar pre-Norman Conquest version, Brocenhyrst or broken wooded hill meaning a hill intersected by streams or featuring many clearings. Although this rings true regarding the streams I preferred the other theory that it comes from badgers or brocks that have always been common here. I was unlikely to meet a badger on this soggy ground where trying to take a short cut proved impossible as the boggy ground grabbed at my feet. I had taken scant notice of an earlier warning to take care as the forest was peppered with dangerous bogs but soon realised this had been no idle caution. I retreated to the safety of the tarmac road and continued into the village. 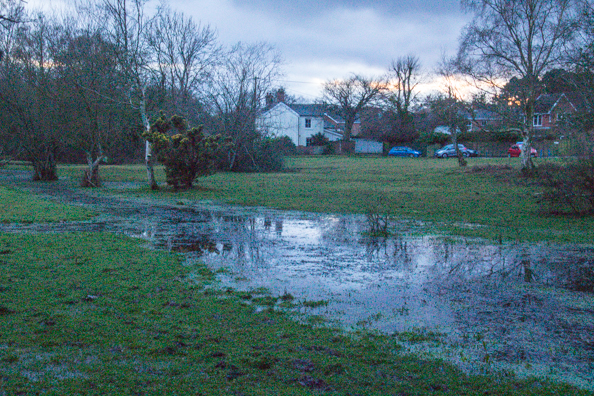 I soon found Brookley Road, the Village High Street a delightfully old-fashioned selection of shops on either side. As I strolled along I was tempted to stop for coffee and cake in the Buttery at the Brock and Bruin tea shop that looked particularly inviting on this wintry day. Maybe later. I moved on browsing the individual shops and smiling at the variety of tins in the window of Pot Pourri. There was a tin for everything including things that did not have a special tin for them. Beyond this shop I found the Village Veg next door to the colourful Village Butcher. There was no time to stop and shop as I was hoping to find some more animals. 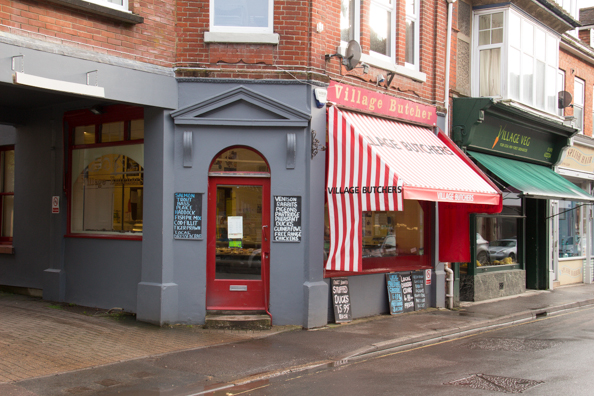 Further along the road I came to the Water Splash or the Splash a convenient watering place for the animals. This is the point where two of the streams, the North and South Weirs converge to form the Weirs stream. Today the water was lapping at either side of the road but sometimes it overflows onto the road. All the streams that meander through the village eventually flow into the Lymington River that bypasses the centre of the village. In the Waters Green area of the village there is a permanent ford where water flows across the road throughout the year. Although I made a detour to check this out I did not find any animals at either source of water so I guessed wet grass must be sufficient that day. 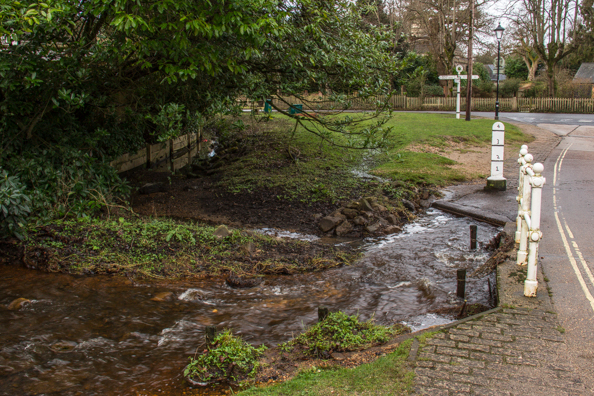 Close to the water splash I found the parish church of Saint Saviour. This church has not always been the parish church. When building commenced in 1895 there were two important families in Brockenhurst, the Morant family who lived at Brockenhurst Park, their home since 1770 and the Walker-Munro family who lived at Rhinefield House (now a hotel). This beautiful late Victorian building was fully consecrated for all public services in 1928. Today, with its modern church hall, it plays an important role in the lives of the local community. After exploring the interior, a pleasing mixture of marble and modern I emerged to find the clouds had parted and the sun had come out. Just in time showcase its exterior of Swanage stone with Bath stone dressings and a roof covered with Purbeck stone tiling. 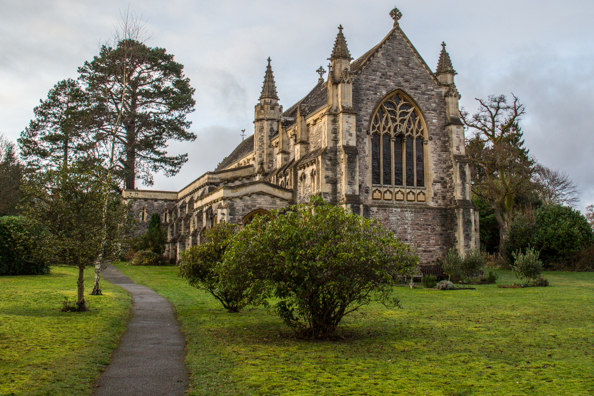 Around the corner from the church I found another patch of common land and this one was occupied by grazing ponies. The area is peppered with patches of open ground over which commoners l have the right to graze their animals. Some rights relate to certain times of the year, for example, pigs can graze in the autumn when they eat the acorns that are not good for the ponies. They watched me curiously as I approached them hoping to get some close up photographs. Although these animals are not wild in the sense they all belong to someone and are rounded up, counted and branded regularly, visitors are advised not to venture too close and not ever to feed them. I remembered this warning when three of the ponies started walking very determinedly towards me. It was time to move on. 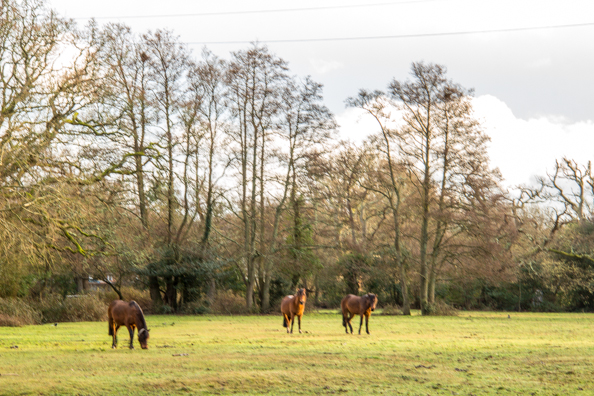 Walking back through the village towards the station I passed some pretty thatched cottages. In particular the Thatched Cottage that offers both accommodation and a restaurant. This is one of many listed buildings in Brockenhurst. On the front of some of the old cottages the letter M is displayed signifying that this cottage was built to house a worker on the Morant estate, Brockenhurst Park. The Morant family was not only influential in the building of cottages but also managed to influence the development of the village. With the arrival of the railway during the nineteenth century Brockenhurst was transformed from a rural retreat to a popular resort. Anxious to preserve their privacy the Morant family, now very powerful, made sure that any new development took place on the opposite side of the railway line from their estate. They installed a private crossing, now a footbridge, to allow them to cross the line to their impressive entrance gate, still visible in Mill Lane. 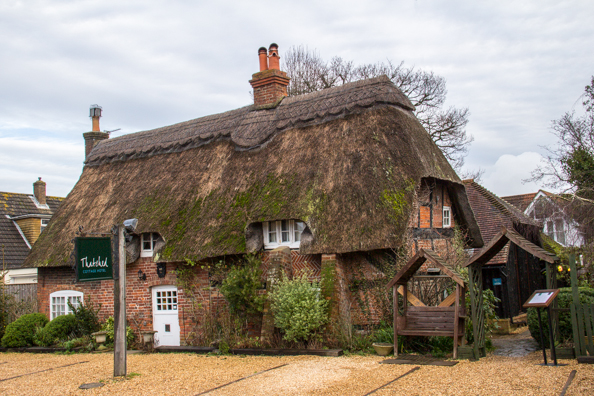 After crossing the railway line at the station, I turned into a narrow lane that leads to the Church of Saint Nicholas. This old church, the oldest in the New Forest, was built on a manmade mound which suggests this place has been sacred since pre-Christian times. It is the only remaining church in the New Forest that was mentioned in the Domesday Book in 1086. Various alterations have been made to the building over the centuries including its enlargement by the Victorians. In the south wall of the old Nave there is some Saxon herring-bone masonry. Its south doorway is a fine example of the Norman period with chevron mouldings and the Purbeck stone font is also Norman. The church and the Manor were next to each other in the Norman period when the Lord of the Manor was obliged to accommodate the king when he was hunting in the New Forest. Certainly, Norman and Plantagenet Kings with their entourages must have worshipped in this church. 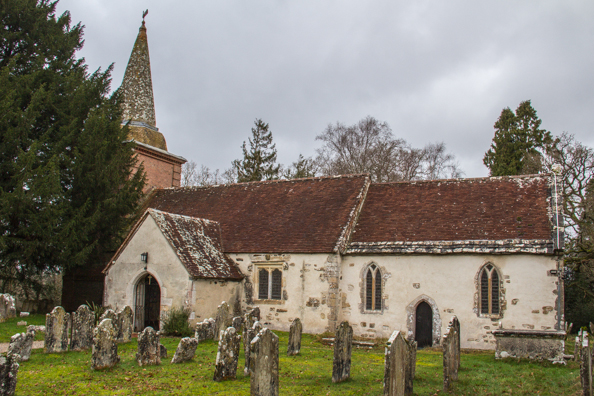 During the First World War, due to the proximity of Brockenhurst to the coast, wounded soldiers were brought from the trenches to Brockenhurst. They were treated in temporary hospitals set up in some of the larger houses and hotels as well as temporary buildings in the fields near the church of Saint Nicholas. There is a small exhibition inside the church commemorating the “Tin Town” Hospital which was in Tile Barn Lane. The church is open to visitors from mid-April until the end of October. The graves of those who did not survive, including almost one hundred New Zealanders surround a large memorial cross that was erected there in 1924. Close-by is the grave of Brusher Mills, the legendry New Forest snake-catcher. 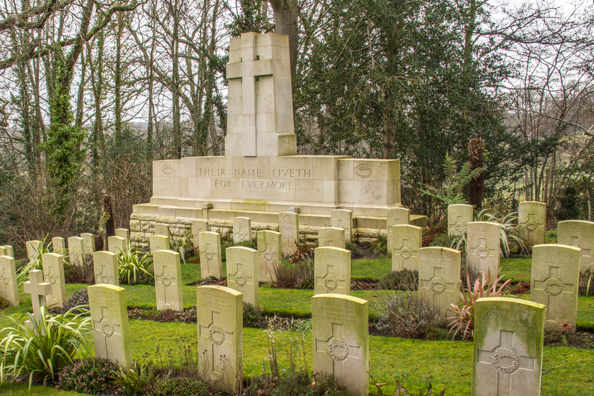 On my way back through the village I called into the Snakecatcher Public House to find out more about the it’s most famous resident, Brusher Mills. Due to its proximity to the railway station this public house was originally called the Railway Inn but was re-named the Snakecatcher in memory of Brusher. Inside articles and photographs record the remarkable story of the snake catcher. Harry “Brusher” Mills was born in 1840 near Romsey. He lived in a charcoal burners hut just north of Hollands wood (now a campsite) but he was far from reclusive. He would invite visitors into his simple home for a cup of tea, a drop of whisky and a chat. He made his living catching snakes and it is estimated that he caught over thirty thousands of them not just as a means of controlling them but also to sell to anyone who would buy them including visitors, zoos and research centres. He was very popular in the village and the Railway Inn that he regularly frequented. 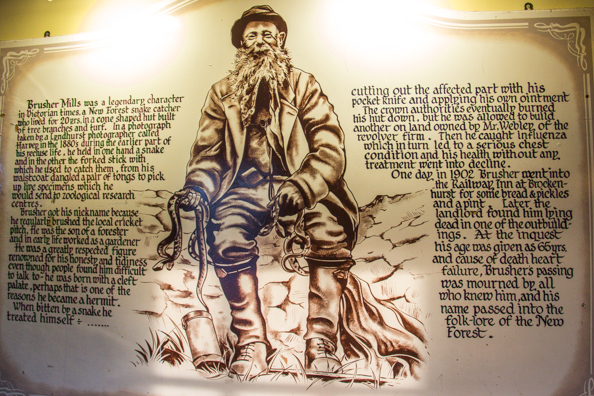 Who would have thought there was so much to see in the village of Brockenhurst? And there was more to come as my hotel, the Balmer Lawn Hotel in is also rich in history. But just time to drink a toast to the Snakecatcher before moving on to that story. 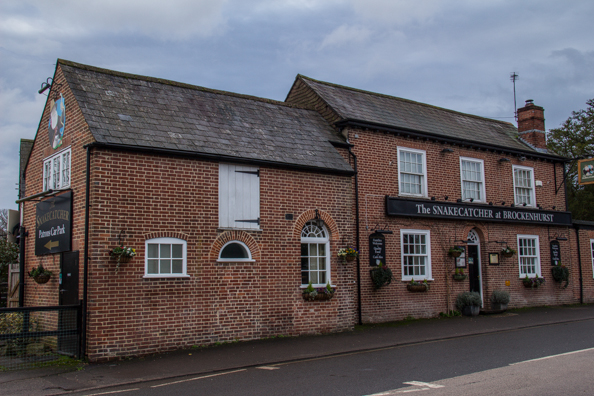 Getting There
Although the New Forest is well-connected to major roads within the forest the roads are narrow and get very busy during the holiday period. There is a regular train service operated by South Western Railway from Waterloo to Brockenhurst and a good local bus service in the New Forest so why not leave the car at home? You can hire a bike to explore the forest or explore on foot. Don’t forget to buy your Go New Forest Card that offers discounts on local New Forest businesses.