A visit to Haeinsa Temple in South Korea is both a walk in a park and a cultural experience. The mountains and valleys of Gayasan National Park make a splendid back drop for the temple. Mount Gaya has long been considered a sacred site of Buddhism and is home to several temples not just Haeinsa. There are also Buddhist hermitages, stone statues and historical sites of Buddhist traditions nestled in the valleys all over the mountains. Its scenery includes rocks one could imagine resemble the shape of Buddha, pine forests and a stream. It was very pleasant strolling through this park towards its famous temple. One of the monuments I passed on the way was the Withered Tree. Apparently this tree was planted to celebrate the building of the temple one thousand two hundred years ago. It finally withered and died in1945 and all that remains is the base of the trunk. 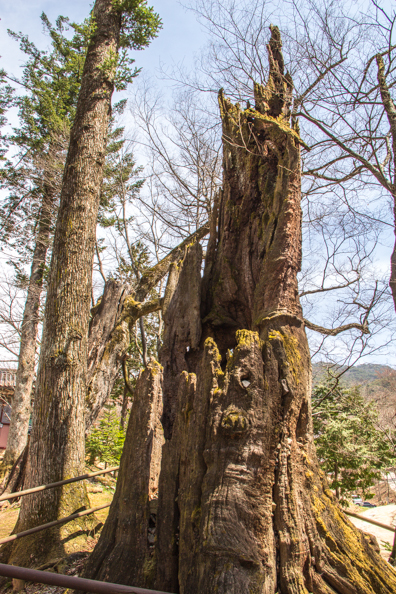 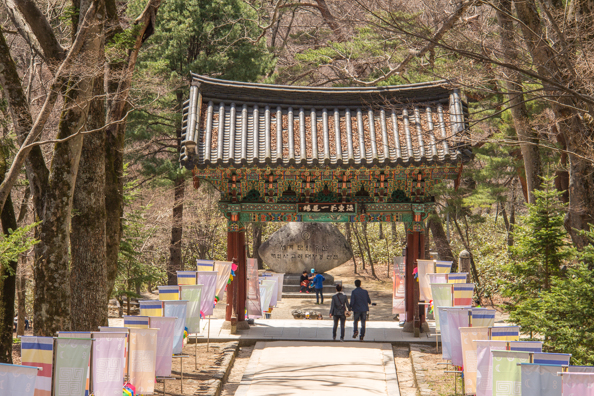 Tongdosa Temple represents the Buddha is the fully enlightened one and the founder of the Buddhism. Songgwangsa Temple represents the Sangha is the monastic order of Buddhism that practices the Dharma. Generally, the highest and most important building in a Korean Buddhist temple is the Mahavira Hall or Main Hall enshrining statues of Buddha and other important figures. But in the Three Jewel Temples the most important buildings are those that celebrate the particular jewel of the temple. In Haeinsa temple this is the Janggyeong Panjeon, halls that hold the Tripitaka Koreana or Daejanggyeongpan created in the thirteenth century. This is the complete works of the teachings of Buddha printed on wooden blocks, an achievement inextricably linked with the history of the temple. 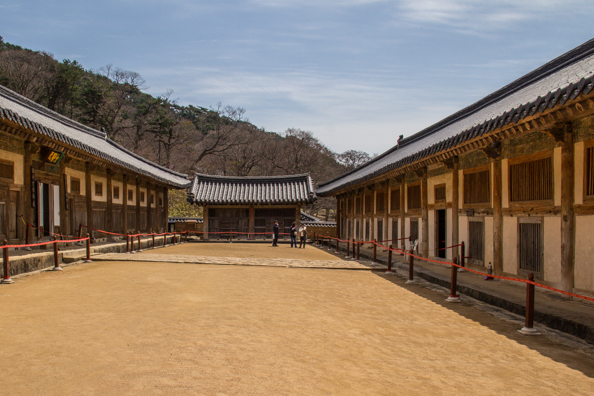 The first temple was built on this site in 802 during the short reign of King Aejang of the Silla Kingdom. According to legend it was built by two Korean monks, Suneung and his disciple Ijeong. They had just returned from China and had discovered that Aejang’s was suffering from a tumour. The monks tied one end of a piece of string to the tumour and the other end to a tree. The monks chanted special verses and gradually the tumour started to wither. At the same time the tree began to die. When the queen recovered the king was so grateful that he decided to build this temple. But, there is a another, simpler story relating to its construction. Suneung and Ijeong gained the support of a queen Dowager who converted to Buddhism and then donated some money to the temple. This temple has been re-built and enlarged since it was first built. As the temples were built of wood they were often burnt down and re-built. 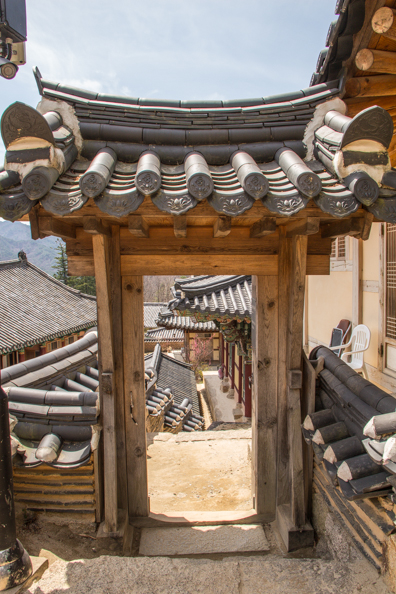 The third gate of the temple accesses the courtyard. On the left side of this courtyard is a new building for teaching and sheltering the people who arrive for the ceremonies. On the right side is a large Bell Pavilion. Stairs lead out of this courtyard to the Main Hall or Daejeokkwangjeon. The Main Hall was re-built in 1818 on the original foundations of the temple. Inside the hall there are seven statues including Vairocana, the principle statue, to whom the temple is dedicated. This is unusual as generally a Buddhist temple is dedicated to Buddha. In addition, this hall houses paintings of Buddha’s life and carvings that reflect the great artistic skills of the craftsmen of the Chosŏn Dynasty.   At the back of the Main hall, another flight of steps leads up to two long buildings, Janggyeong Panjeon, the halls where the Tripitaka Koreana is kept. This complex of four halls is the oldest part of the temple. Although the date of their original construction is not known they were expanded and renovated in 1457. These halls have survived seven temple fires and escaped the bombs of the Korean War. During this war orders were given to bomb the temple but the pilot of the plane recognised the importance of the building and refused to bomb it. He was court martialled and imprisoned but later, when he was released he was hailed as a hero for saving the temple. 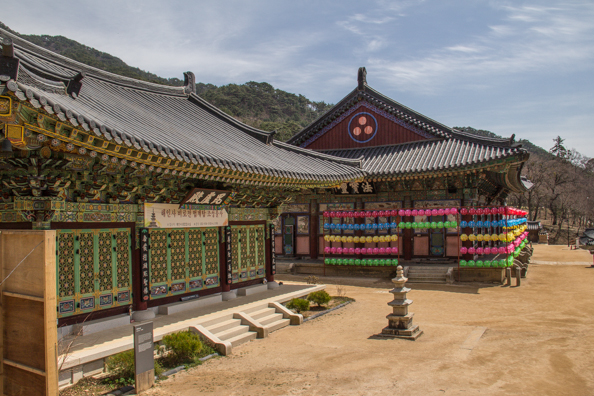 It took sixteen years to complete the Tripitaka Koreana. A copy of the Buddhist scriptures was commissioned by the Korean government (then in exile) in the hope of persuading Buddha to intervene in the crisis caused by a Mongolian Invasion. Over eighty thousand blocks inscribed with nearly seven thousand volumes were made. The wood blocks were made of white birch, a tradition in Korea. The wood is first soaked and then boiled in sea water for three years and then dried in the shade for three years. Once completed the blocks were stored and ingenious techniques were employed to preserve them. The storage unit was built at the highest point of the temple facing southwest to avoid damp south easterly winds and sheltered from the cold north wind by the surrounding mountains. Different sized windows were used for ventilation and to regulate the temperature. Filling the clay floors with charcoal and other moisture absorbing materials reduced the humidity when it rained by absorbing excess moisture. The roof was also made from clay and the bracketing and wooden rafters prevented sudden changes in temperature. No part of the complex was exposed to the sun and animals, insects and birds avoided the area but it is not known why. These preservation measures are deemed responsible for the wooden blocks surviving to this day. Although a modern storage complex was built in 1970 the woodblocks were not moved there as it was discovered they were mildewed. However, the words have now been recorded in electronic form. 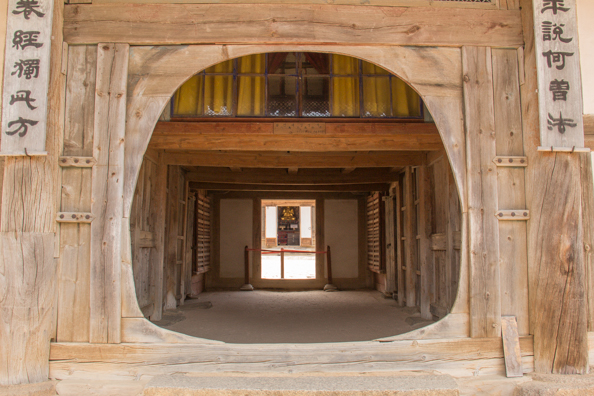 As I left the temple I stopped to admire the pristine prayer maze created from coloured sand in front of one of the buildings. These prayer mazes or labyrinths are an ancient form of meditation and prayer. I prefer to mediate in a more natural setting and made my way back into the park for a walk. As I was leaving the temple I passed some local stalls and spent some time trying to identify some rather strange fungi on offer. Despite the language barrier I understood that these were edible but I decided not to take the risk and just a photograph before continuing on my way. 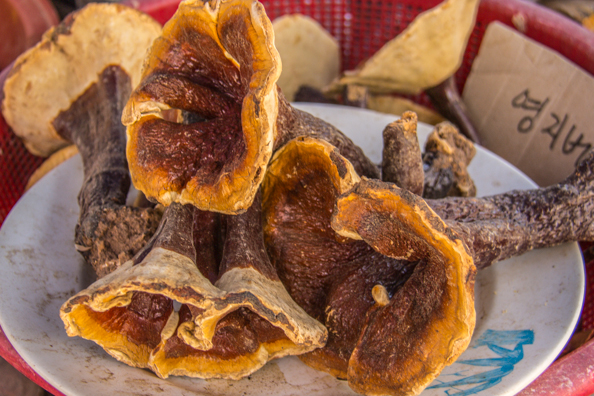