Entering the Dragons’ Den at Tongdosa Temple in South Korea

My visit to Tongdosa Temple in South Korea coincided with the preparations for the birthday of Buddha. Celebrations for this event not only encompass Buddhist temples but the whole country and it is a holiday for everyone, whatever their religion. I had already seen colourful decorations lining the streets of the cities I had visited in anticipation of the big day. I approached the outer gate of the temple under a canopy of brightly coloured decorations inflated fish. 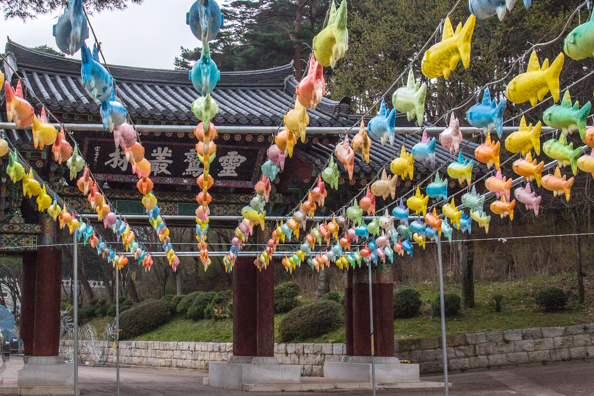 Stepping through this gate I entered the dragons’ den. Or rather, a dragons’ workshop. I had not realised that the huge, colourful dragons that dominate Buddhist festivals in South Korea are actually created, on site. On one side of the path was a line of steel dragon skeletons awaiting their turn to be dressed and decorated. 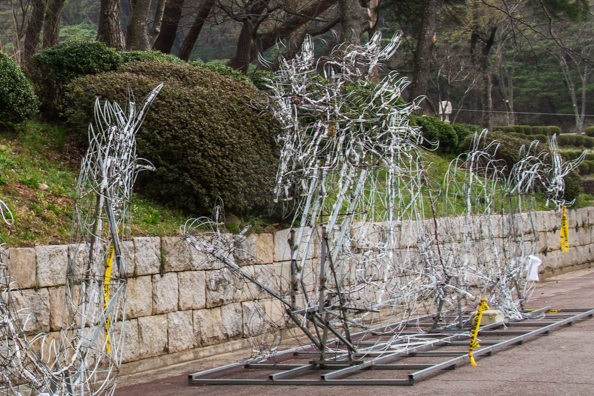 Just beyond the waiting area was a large tent. Inside the tent a man on a step ladder was bringing a new dragon to life by applying a skin of white paper. It was a painstaking job and his dexterity was impressive. 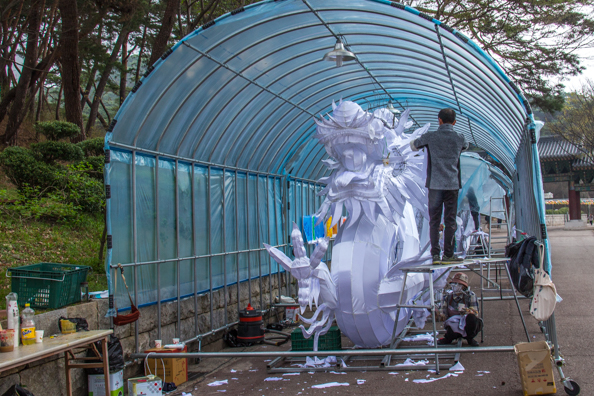 In the next tent the final stage was in progress as white dragon was being transformed into a colourful, fiery creature. When the Korean kingdoms adopted Buddhism during the fourth the dragon became the most important divinity of Korea. During the period that Buddhism was the official religion the dragon was actively worshipped. Halls in palaces were dedicated to the dragon. It was during the Joseon Dynasty founded in the fourteenth century that the dragon was endowed with ancient powers. 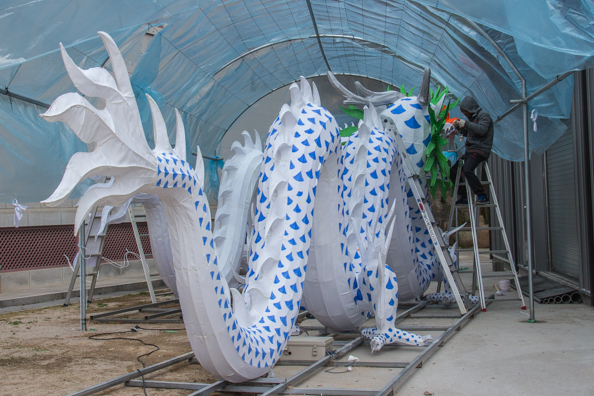 The dragon’s powers were connected with rain, royalty and human destiny. Rites devoted to the dragon began to develop and dragons became the object of some popular myths. A Dragon King ruled over water and his aquatic palace was believed to be an ideal world or a paradise. The dragon emerged as a more important deity in Korea than in the other Asian countries. One reason for this is thought to be the geography of the country – a peninsula surrounded by sea and populated with mountains. Ideal terrain for dragons to live and build their palaces by the streams, brooks and rivers coursing their way through the rocky terrain. A role was created for the dragon which became the guardian of Buddhism. This was possibly because Korea is situated between China and Japan both of which often invaded it. Thus, the dragon became the guardian of Korea which Koreans believed to the true Land of Buddha. Lined up along the river that flows through the grounds of Tongdosa Temple were several completed dragons – in their natural habitat. 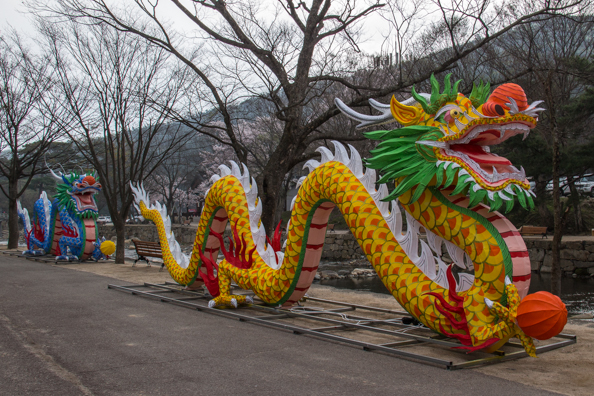 After the excitement of the dragons’ den our guide gathered us together to tell us about Tongdosa Temple. It is the largest temple in Korea. It is a Buddhist temple but is famous for its lack of statues outside its buildings. It is often referred to as the ‘temple without a Buddha’. The courtyards in the temple have been built around several pagodas and a Buddhist altar. Instead of a statue of Buddha shrines of the Buddha are preserved in the Geumgang Stairs behind the main building. It is said that its temple candle or Beopdeung has never been extinguished for 1,300 years. This temple was built during the Goryeo Dynasty (935 to 1392) which was the only period during which Buddhism was the state religion. During this period the construction of temples increased but so did corruption amongst the Buddhist clergy who accumulated wealth and prestige. These excesses were the downfall of the Goryeo Dynasty and the next dynasty, the Joseon Dynasty embraced the principles of Confucianism. Its rulers imposed restrictions on Buddhism including the building of temples and discouraging upper class youngsters from becoming monks or nuns. Because of this Buddhism became the religion of the lower classes adopting their traditions and addressing their needs. 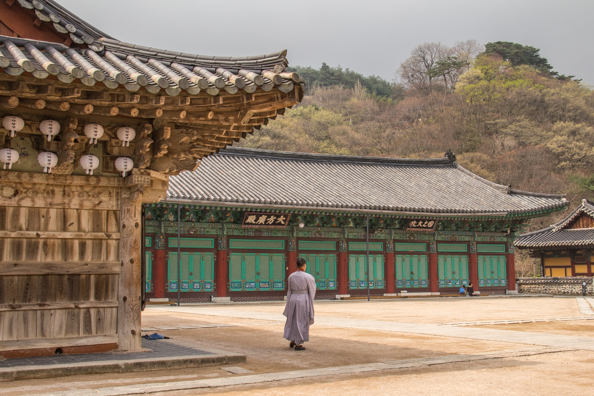 Tongdosa is the most important Buddhist temple in South Korea as it is said that it houses some real relics of Sakyamuni, the historical Buddha and for this reason it is seen to represent Buddha himself. Jajang, the great monk, originally founded the temple in 646 to house his collection of Sakyamuni relics acquired during his travels. The most important of these were placed in a special budo or stupa shaped reliquary on a platform he called Geumgang Gyedan. This platform remains to this day, close to the Main Hall and considered to be the centre of the temple. 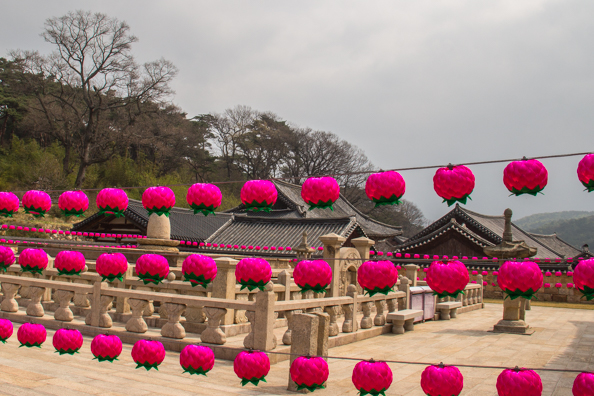 Prior to the Japanese invasion of 1592 – 1598 the temple flourished but during the invasion it was ransacked. However, its main hall survived. During the seventeenth century the rest of the temple was rebuilt and today it is South Korea’s largest monastic complex and home to around five hundred monks and nuns as well as eighteen hermitages in its large, beautiful grounds. Pine trees line the path that leads to the temple and the beautiful Chiseosan Mountain keeps an eye on the attractive buildings that litter the banks of its river. We had entered through the outer gate, the Ilju Gate. Ilju Gate translates as One-Pillar Gate which means pillars lined up in a row. This represents the need to be of one mind empty of passions and attachments to the world and ready to commit totally to the path of salvation according to Buddha. 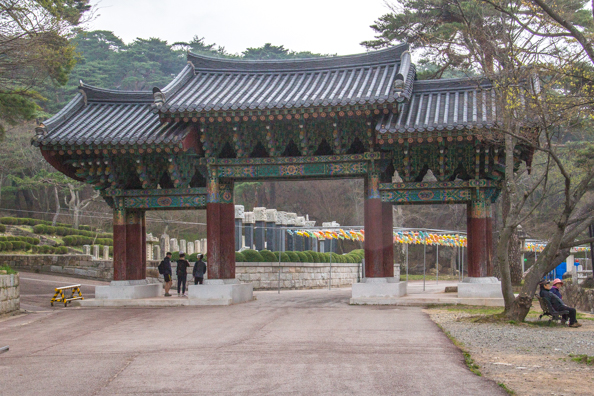 Most large temples in Korea have three gates. The second or Cheonwangmun Gate is also known as the Gate of the Four Guardian Kings or Four Heavenly Kings. This gate represents the division between the real world and the spiritual world. As the name suggests the Four Heavenly Kings reside inside this gate. Their purpose is to protect Buddhism and Buddha’s teachings. They do this with a variety of implements and fierce expressions. Each of these four kings guards a corner of the four-sided mythical Mount Sumeru the centre of the Buddhist and Hindu worlds. Vaishravana guards the North and is recognised as the leader of the Guardian. He holds a pagoda which symbolizes the stupa. Dhritarashtra guards the East, lute in hand to control the weather with its strings. Virudhaka guards the South, a sword in his hand. Virupaksha guards the West holding a dragon in one hand and jewel in the other. Apart from their duty to force unruly spirits to bow to their will they are also there to focus the minds of people entering the temple. So to be sure you can enter the inner sanctuary of the temple bow before them and rid your mind of bad thoughts. You will also encounter their watchful eyes in the corners of the temple halls. 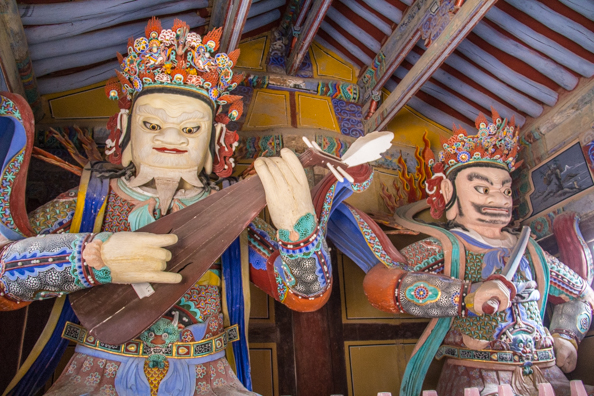 The third and innermost gate, Purimun or Non-Duality Gate leads to the halls of worship meaning the apparent opposites of leaving the secular world and entering a religious world are actually the same thing and everyone is blessed with Buddha’s nature. For this reason, it has a second name The gate of Liberation. Beyond this gate is the unique Main Hall or Geumgang Daeung-jeon. Unique because it is gabled on three sides instead of the usual two side. This means the hall looks exactly the same from all directions. Inside the Main Hall Amitabha or Infinite Light, a Buddhist Deity, sits alone on the altar. The day I was there sacks of rice were piled up around the altar, birthday presents for Buddha. 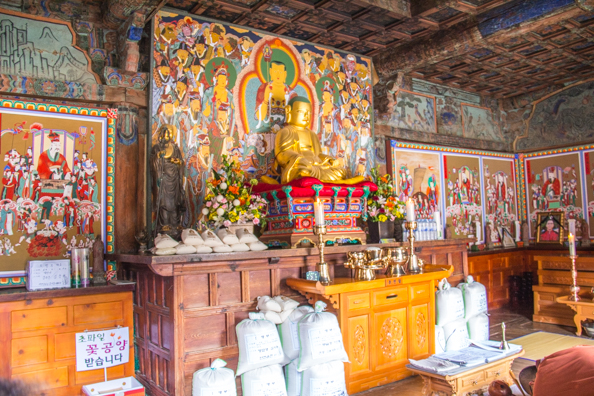 I made my way out of the temple via the two-storied Bell Pavilion, better known as the Brahma Bell Pavilion. All Buddhist temples have a bell pavilion but this two-storied one is a particularly good example and houses all four of the Buddhist percussion instruments a bell pavilion should contain. The first is the Brahma Bell, the second is the Dharma Drum, the third is the Wooden Fish, and the fourth is the Cloud Shaped Gong. They are all housed in one pavilion is so that offerings can be made to them. Different offerings relate to each bell. The instruments are sounded at different times of the day for different reasons. The Dharma Drum beats to save all beings living on earth. The Wooden Fish is the saviour of all fish and both sides of the hollow fish are struck with two sticks to make a noise. The Cloud Shaped Gong is made from bronze and is sounded to save all beings in the sky. This is sometimes found in the temple kitchen to announce meal times. The Brahma Bell is struck to save all the beings in hell. It is struck in the morning and the evening and as it is being struck all the beings in hell are released from their suffering. While I was visiting the Tongdosa Temple I only saw one monk and never hear any of the percussion instruments being struck. I wished I had had time to take advantage of the temple stay http://www.tongdosa.or.kr/eng/templestay/introduce.php when I could have seen the early morning ceremony of the monks at the Bell Pavilion. 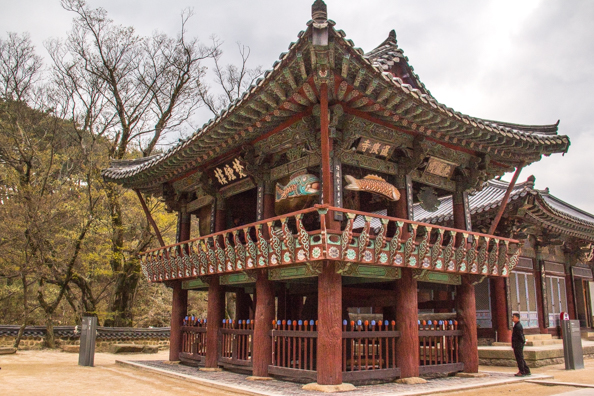 My day was destined to start and finish with dragons. Behind the Main Hall I found the Guryong Shinji or Nine Dragons’ Sacred Pool. This pretty little pool, crossed by a bridge, does not look big enough for one dragon never mind the nine that, according to legend, used to live in this area. It is said that Jajang had to drive these nine dragons away in order to build the temple. But one dragon begged to be allowed to stay so that he could protect the temple from evil spirits. This pool was built for this dragon to live in. A hall dedicated to Nahan (the Disciples of the Historical Buddha) stands alongside this pool. 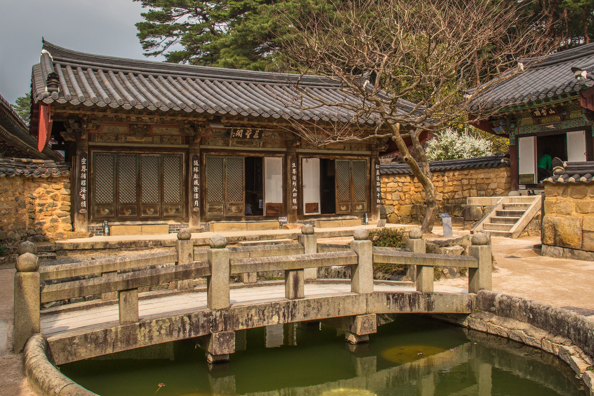