The small town of Jeonju in South Korea is inextricably linked with the history of Korea. One of its most important historical monuments is the Omokdae Terrace. This terrace, on top of the hill overlooking the town is famous as the place where Yi Seong Gye hosted an outdoor banquet for his family on his way back to Gaegyeong after winning a victory against Japanese invaders. During this banquet Yi Seong Gye recited the Daepungga song that Liu Bang founder of the Han Dynasty, once sang as an expression of his ambition to found a new country of his own. This is significant because, thanks to his military prowess, Yi Seong-gye founded the Joseon Dynasty in Korea. He was the first king, King Taejo, of this new dynasty. The Imokdae Pavilion on the terrace commemorates this event. 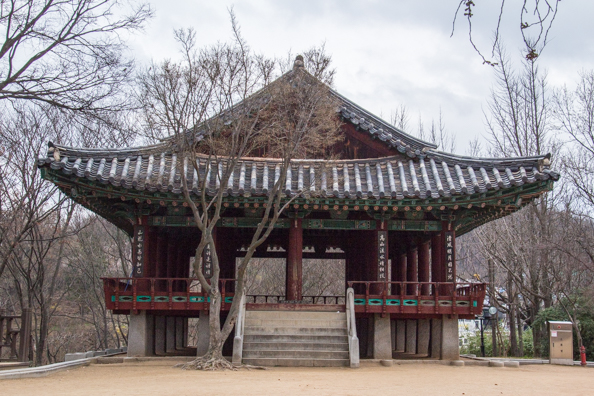 As I made my way down the wooden steps from the terrace I had a great panoramic view of Jeonju below me. In particular I could see the contrast between the Jeonju Hanok Village and the modern town. I could also pick out another historically important building, Gyeonggijeon Shrine of Jeonju. Originally built in 1410 this palace was re-built in 1614. Inside its compound are shrines, storehouses and guardrooms that were once used for Confucian rituals. The official religion of the Joseon Dynasty was Confucianism. This philosophy respects its ancestors and although Yi Seong-gye was not born in Jeonju his family originated from here. The wall of Gyeonggijeon was built to hold an official royal portrait of King Taejo. A copy of the original portrait and the only portrait of this king is now housed in the Royal Portrait Museum inside the shrine with portraits of other Joseon monarchs. 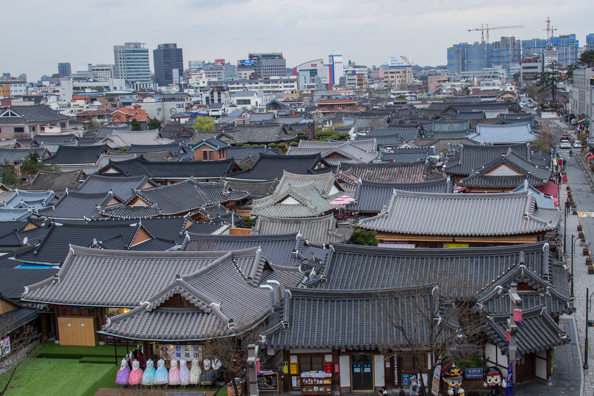 Jeonju Hanok Village comprises around eight hundred traditional hanok houses. Hanok was once the main architectural practice of Korea and has a long history. All hanok residences from simple mud huts to palatial residences incorporate the same principle, exiting peacefully with the simplicity, beauty and spirit of nature. They are all equipped with ondol (underfloor heating) and maru (a large wooden floor area). Koreans spend most of their time on the maru in hot weather and then it is warmed by ondol in cold weather. Heating under a wooden floor by burning wood is generally considered to be a dangerous practice but, due to the weather pattern on the Korean peninsula, cold and dry in winter and hot and humid in summer, it was necessary to develop a system that could both heat and cool. The resulting hanok is unique. Today the heating and cooling systems have been modernised but the principle remains the same. The Hanok was built from natural materials with a stone base, wood pillars and a clay roof. These buildings also used hanji, traditional Korean paper made from the bark of the mulberry tree, on flat surfaces inside the home such as walls, doors and ceilings. Hanji not only insulates but its transparency allows sunlight to filter through and tiny air holes ventilate the house. It completely satisfies the principles outlined above. 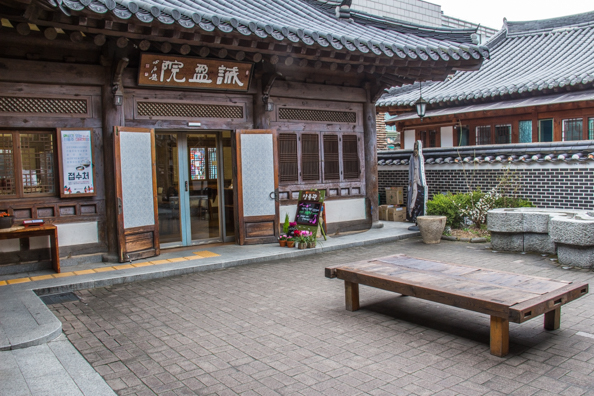 Koreans enjoy sitting, eating and sleeping on their heated floor an experience that is replicated for visitors in the Hanok Life Experience Hall. For visitors who would like to try staying in a typical Hanok bedroom there are guesthouses in the village and some hotels offer Hanok bedrooms. I stayed in the LeWin Hotel but I did not have to sleep on the floor as this hotel offers comfortable, modern bedrooms. However, my guide, Ellison, was delighted that the hotel also had hanok rooms and she was able to sleep on the floor as she does at home in Seoul. The following day she showed me photographs of her room in which there was a low wooden table on a wooden floor. Colourful bedding was piled on top of the table. Koreans sleep on a very thin mattress to maximise the warmth from the floor and use small pillows. Local markets generally have colourful displays of typical bedding. 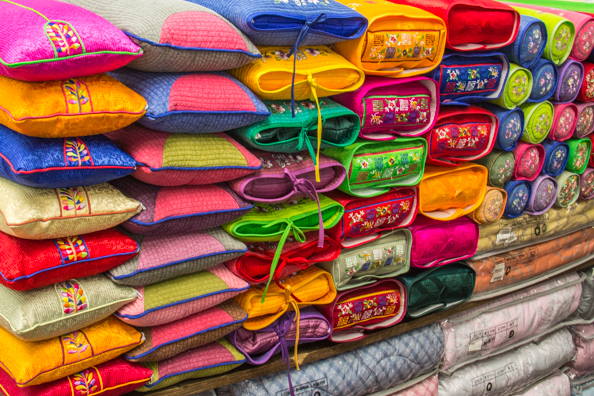 The traditional costume of Korea is the hanbok and visitors can hire these to complete their hanok village experience. Worn on a daily basis by Koreans until a century ago it is still popular attire on special occasions. These garments were originally designed to allow freedom of movement. There were various types from those for daily wear to ceremonial dress. There were also hanboks relating to age and gender. But the basic design of all these different styles related to a desire to reflect nature. This translates into the creation of a pleasing interaction of lines and angles. The bright colours typical of the hanbok correspond to the five elements: metal (white), fire (red), wood (blue), water (black) and earth (yellow). Social standing and marital status were also reflected in the colours for example, single women often wore yellow and red. Whereas the upper classes could wear bright colours the lower classes were expected to wear white but could dress in pastel colours on special occasions. So, if hiring a costume choose your colours carefully. 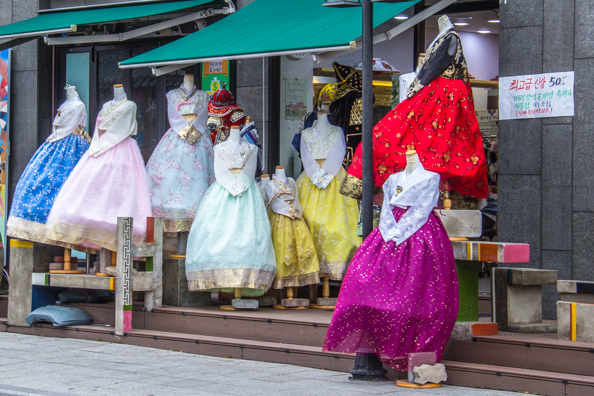 Many of the Hanok house in Jeonju have been modernised and converted into shops, restaurants and small cultural centres which feature crafts that have existed in this village for centuries. I visited a traditional hanok to learn about the tradition of rice wine making. Here, I enjoyed tasting four different types of rice wine – starting with the cheapest made from the fourth distillation of steamed rice, makgeolli is one of the oldest of the traditional Korean liquors made from steamed glutinous rice, barley or wheat. Jeonju is in the top three Korean makgeolli producers so it is taken very seriously here. Maybe it would have been wiser to start at the top with the most refined version as the more expensive wines compared poorly with this slightly sweet milky drink. Makgeolli is served by the kettleful in local restaurants and sold in plastic bottles of different flavours in the local supermarket. It is fast becoming popular in the West as well. Close by is the Jeonju Traditional Hanji Centre I watched the Korean paper known as hanji being made by hand. Hanji was not only used in Hanok houses but it is still widely used for many purposes including calligraphy, paintings, wallpaper and crafts such as masks and fans. It was fascinating watching the process of making paper by hand. Once it was dry the paper was whisked away to be used to make a huge variety of different products on sale in the centre’s shop. These included large sheets of paper of every hue imaginable, notebooks, cards and colourful masks. 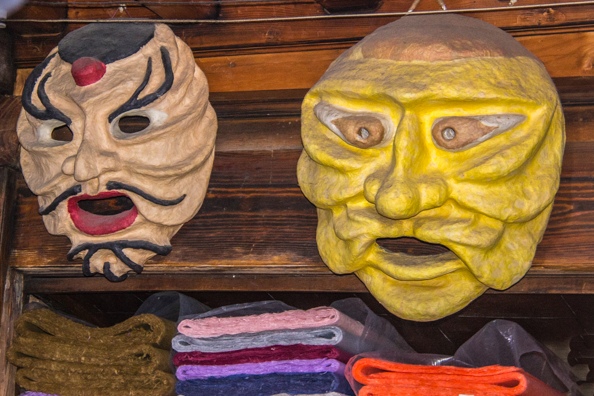 Hand fans are also an ancient Korean art. The Jeonju Buchae Culture Centre, Where the Breeze of Jeonju Starts, exhibits traditional Korean fans. This centre also runs programmes on fan-making and visitors can buy a blank fan to create their own design. Jeonju has been famous for the production of quality fans since the Joseon Dynasty was founded in the fourteenth century. Inside the centre I was captivated by the display of Jeonju Buchaes (fans) which take various forms including the Jeobseon (folding fan) and the Danseon (round fan). The ribs of the Danseon radiate from the handle in the centre like the rays of a setting sun.

Jeonju is so famous for its food that in 2012 it was given the accolade of UNESCO City of Gastronomy. Another claim to fame here is that the ever popular Korean dish Bibimbap originated here. Bibimbap means mixed rice and it is served as a bowl of warm white rice topped with namul (sautéed and seasoned vegetables) and gochujang (chili pepper paste), soy sauce, or doenjang (a fermented soybean paste). Jeonju has its own version of this dish and serve it with yukhoe (Korean beef tartar), hwang po mook (a yellow jelly made from mung beans) and raw egg yolk (most other regions in Korea use fried eggs). This rice in this dish is cooked in beef broth rather than plain water. It is widely available in the many restaurants in Jeonju as are other Korean classics such as Tteokgalbi (Korean meat balls) and the street food. 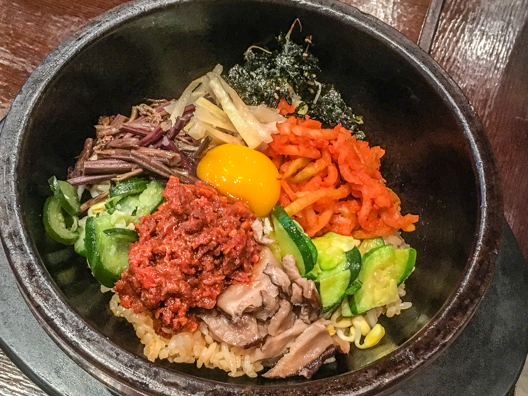 Wandering along and wondering where to go next I was greeted in English by a friendly Korean who invited me to visit his house. Taken aback at first I agreed to enter the walled compound and joined a small group of people who had just arrived. I soon discovered the house, Seonggwangiae, is the home of Mr Suk Lee a great grandson of Daewon-Gun and an Imperial Grandchild of the Empress Myeongseong and Emperor Gojong. Mr Suk Lee, the last Imperial child gives lectures about the Royal Family’s traditions, culture and history. There could not have been a better ending to my day in Jeonju – talking to a descendant of the Imperial family that originated from here while perusing old photographs of his ancestors.