Finland in the Wild

This winter I went to Narnia aka the Wild Taiga in Finland. I arrived in the early evening and was driven along snow covered roads through pools of yellow light cast by the street lights above us. After passing through the town of Kuhmo the residences thinned out quickly and were non-existent when we turned off the road. My hotel, Hotel Kalevala, looked like a fictional creation from the outside as it loomed up ahead through a misty haze. My adventure had begun. 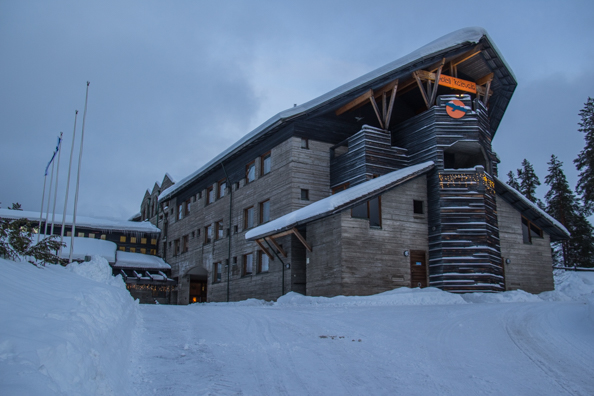 When I woke the next morning and peered out of my bedroom window I could see trees with branches bowed from the weight of fresh snow that had fallen during the night. Through the gaps between the trees was a vast white plain – the snow covered, frozen Lake Lammasjärvi that surrounded us. No other buildings in sight. I could not wait to explore my surroundings. After a lovely breakfast buffet in the hotel’s cosy restaurant I went for a walk around the hotel. Although it was already ten o’clock the sun was just breaking through and I could see a pink glow through the lifting clouds. I was enchanted. 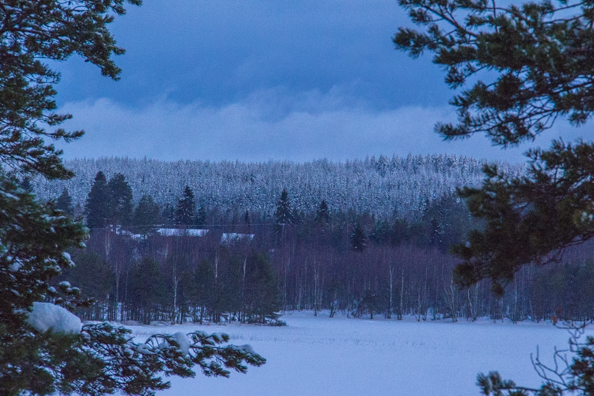 But there was no time to linger as I could hear the snowmobiles starting up on the edge of the lake and it was time to get ready for my first activity – a snowmobile safari. I headed back to the hotel and collected my thermal suit, boots, gloves and helmet – all supplied by the hotel. After a safety talk and demonstration our machines were turned on and we were off. Leading us was Martti a veteran of snowmobiling racing. His back brace a result of years of bouncing over the rough surfaces of frozen lakes. There was no obvious reason for the knife in a sheaf on his belt but I felt he was ready for any eventuality. Martti did not speak English and relied on our back-marker Hannu to explain the signalling for stop, go and help. 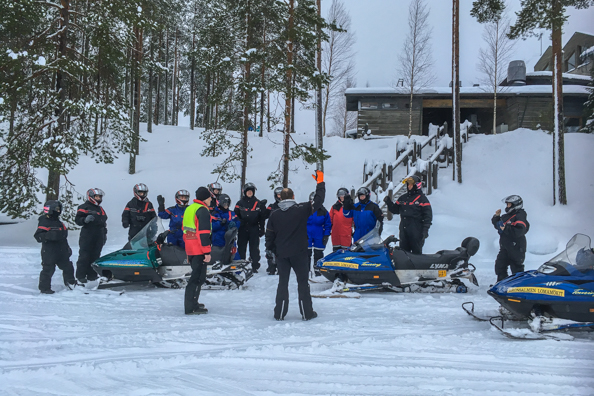 We set off in an orderly line skirting the lake. I had my own machine and was soon familiar with the controls and keeping a safe distance from the person in front of me. When we turned off into the woods and followed a narrow trail we had to cope with ruts and bumps. I tried various techniques to negotiate the deepest ruts and discovered that taking them at speed was not always successful as the runners of my machine veered violently to the right and I had to wait for Hannu to dig me out of the snow bank in which I was embedded. Meanwhile, as I looked back to see where he was I watched in awe as the machine behind me rolled slowly over onto its side. We were both soon back on the track, no damage done. By the time we emerged from the woods we were all handling our machines with confidence and enjoyed speeding back across the lake to our starting point. 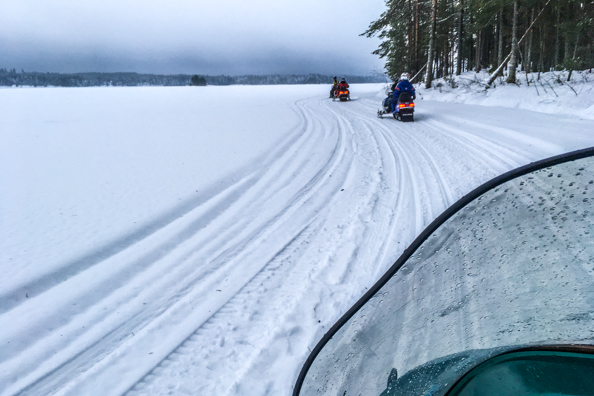 That afternoon I walked the short distance to the Petola Nature Centre to learn about the wildlife in the area. Bears, wolves, wolverines and lynx are just four of the many animals that inhabit this wilderness. We were unlikely to see any in the winter but a summer trip could well find its way onto my bucket list. For now, I had to make do with the images and wooden replicas in the Centre. There is also a War Museum close to the hotel that documents the invasion of Russia into Finland during the Second World War. 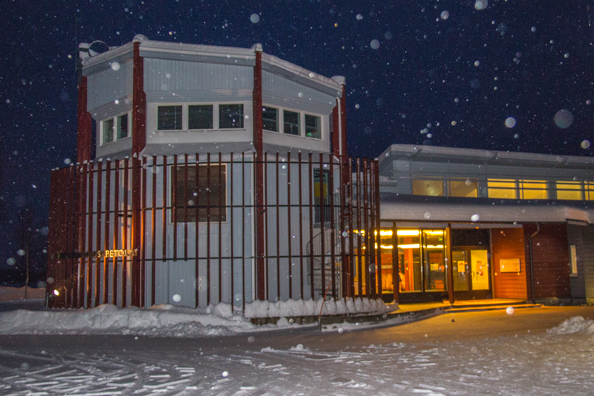 As I walked back to the hotel locals swished past me on their kick sledges a popular mode of transport here. I decided I would have a go the next day as I had a free morning. However, I was side-tracked by an invitation to go tobogganing. The hotel has a supply of toboggans of various styles available for guests to borrow to hurtle down several runs of different steepness. It was hilarious with most of us managing to parting company with our bobs and some even managing to speed down the slope backwards. The kick sledge was more of a challenge as it involved balancing on two thin runners. These runners were both the steering mechanism and the brake. Confidence brimming over I set off down the hill that led to the approach road. The contraption gained speed at an alarming rate and as the road got nearer and I was going faster and faster the only option was to throw myself and the sled into the soft bank of snow at the edge of the road. Lesson learnt I trudged back up the hill and found a flatter path on which to hone my skills. It was a great way to get around. 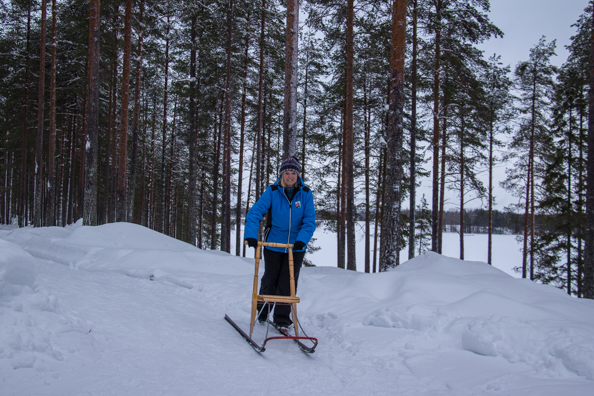 That afternoon I joined a cross country ski lesson. As this started at three in the afternoon it was already dark and the lesson took place on a flat floodlit area. As a downhill skier I struggled to control the thin skis attached only at the toe end of my foot. Despite the encouragement of Perti I did not graduate with honours. I was more successful the next morning when I met up again with Perti to do a guided snow shoe walk. This was an activity I had done before so I was familiar with the racket-shaped objects attached to my feet. As the snow was deep and soft we were advised to follow in Perti’s footsteps. Perti was once a commander in the Border Patrol (the Wild Taiga is only forty kilometres from the border with Russia) and was used to being obeyed. When I decided to go off-piste and make my own track through the deep snow he watched from a distance as I fell flat on my face and then floundered around in the deep snow trying to get upright again. It was an exhausting and a source of great amusement to the rest of the group. 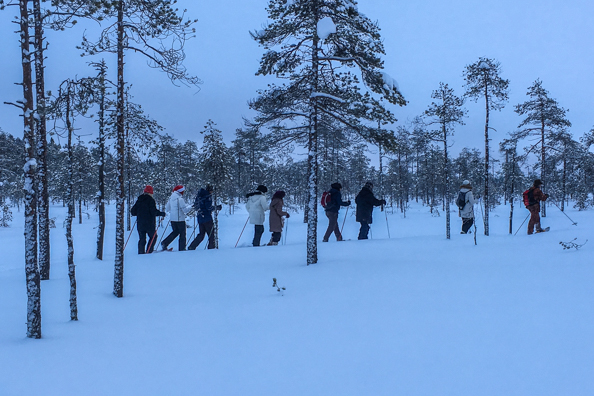 The organised activities included three taster sessions – a husky sledge ride, a horse sleigh ride and a snowmobile sleigh ride. The latter was also used to transport guests to the smoke sauna in the grounds of the hotel. An unusual form of transport it was also fun. The husky sledge was very enjoyable and the dogs were so sociable they often headed for the spectators rather than one of their handlers, Suvi. Aki is the owner of one of the companies, Routa Travel, that organising husky sledging for guests at the hotel. I was to meet them several times during my stay. On this occasion there was no time to linger and chat as the queue for the horse sleigh ride was getting longer and it was time to join it. Of the three activities that morning the horse sleigh ride was my favourite. We flew across the snow at great speed, the faint jingle of the bells on the horse’s harness in our ears. Our driver, Lauri, encouraged by our squeals of delight increased the speed. We were in good hands as Lauri has been a very successful racer of horse-drawn sleighs. It was a magical experience. 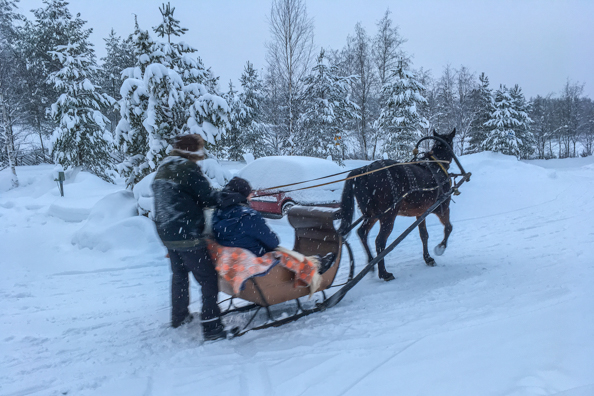 Encouraged by the husky sledding taster I decided to try the husky experience run by Aki and Suvi. They are based a half-hour drive from the hotel in their own little wilderness. The nearest neighbours on either side are three kilometres away. They have twenty-five huskies that live in large enclosures outside, each with their own kennel. When we arrived the dogs were quiet and relaxed and we were able to hear Aki’s explanation of how to control the dogs and what to do if you fall off the sledge – never let go under any circumstances. 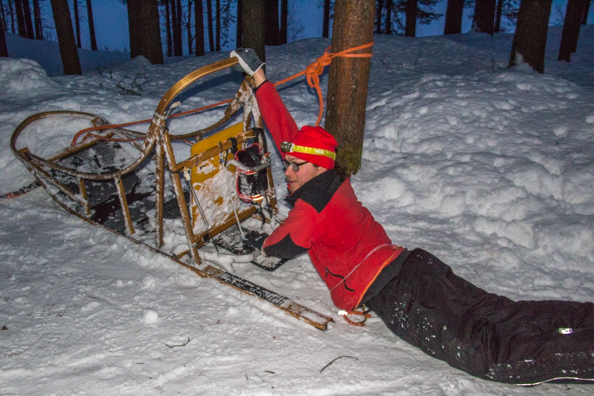 As soon as Aki started harnessing dogs to the sledges the excitement among the dogs was tangible and loud as they all clamoured to be part of a team. Once the teams were harnessed and the first drivers in position the dogs raced away. The rest of us followed on foot. As we walked down a narrow track with snow-laden trees I was back in Narnia and would not have been surprised to see Aslan padding slowly to towards me. I was jolted from my reverie by the sound of returning dogs. Now it was my turn. As soon as Aki set off in front of me I released the brake and my huskies responded immediately chasing after Aki. It was fabulous as we raced along the narrow track carved through deep snow. I soon learnt to transfer my weight to keep the sledge on the track. There were occasions when we were airborne after hitting a large bump. Somehow I managed to stay on the runners. As I relaxed and tuned into the motion of the sledge and was able to enjoy the whole experience – the whisper of the runners on the snow, the panting of the dogs and the rush of cold air on my face. A unique and wonderful experience. 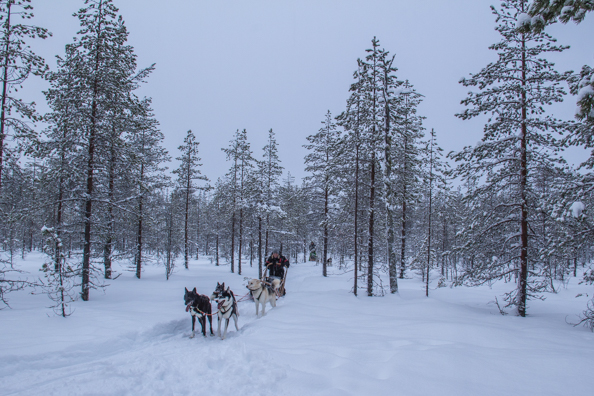 After the sledging Suvi invited us into their house where we had some warming soup – vegetable with elk. We quizzed Aki and Suvi about their dogs and learnt about their individual characters and traits. They offer a very special experience and one I will always remember.