I travelled to Puerto del Rosario on the public bus. When I arrived at the bus station I appeared to be in the middle of nowhere. Leaving the bus station, I was looking for clues regarding the whereabouts of the town centre. All I could see was a huge sculpture in the middle of a roundabout. I had noticed a few of these as we got nearer the town. I was soon to discover the decoration of roundabouts and the painting of huge murals was part of an initiative at the beginning of this century to turn the town into a sculpture park. Most of the murals can be found along Wall Street. 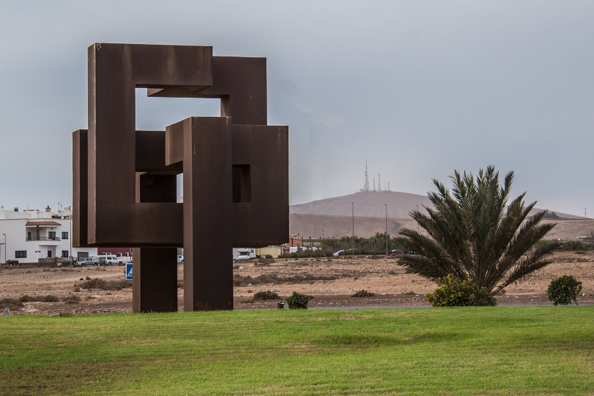 Puerto del Rosario is the capital of Fuerteventura in the Canary Islands and I had expected the bus station would be in the centre of the town. I could see a glint of sea between some buildings ahead of me so I decided to head for the sea. On my way towards the sea front I passed the barracks. Stationing the Spanish military here had brought prosperity and people to the town. Initially the island had been divided into two kingdoms. After the island was conquered in 1402 it became the property of a nobleman or landlord who had absolute power, even in military matters. During the following centuries up until the end of the nineteenth century a military organisation of Colonels or Coronels, Lieutenants, Captains and Subalterns existed alongside the landlord. From the eighteenth century on the Colonel was also responsible for the weaponry and was the highest authority in the absence of the landlord. The Colonel was not only a prestige military man but also an important landowner. The army was comprised military groups made up of peasants and islanders who were obliged to take up arms and defend themselves in times of threat. This all changed in the nineteenth century when the feudal system was abolished and the first barracks were established in the new capital, Puerto del Rosario, in 1904. Since then several different military units have passed through these barracks. Today the barracks are still in use although the number of soldiers stationed there has been reduced. 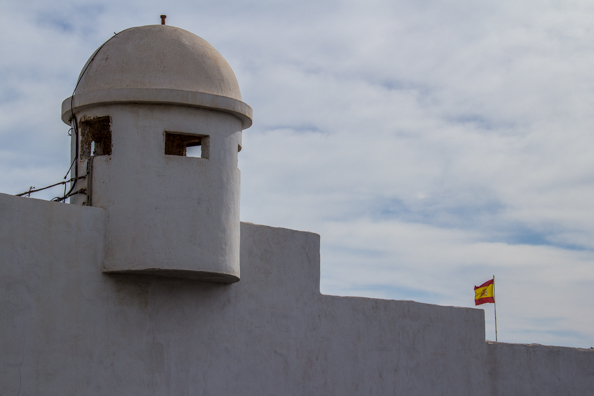 On guard outside the barracks is bronze statue of an Arquebusier by Edgardo Junco Nieto. It represents a soldier from the Saria 9 Regiment the oldest regiment in Europe whose origins dating back to 1509. Their leather clothing was covered by a marion, a steel mail Their main weapon was the arquebus, a small canon mounted on a wooden support. They carried s a bandolier from which the strings or loads of gunpowder hung in twelve copper or wooden containers. These were known as the “twelve disciples”. A reserve charge of gunpowder and a knapsack in which the shot, the fuse and the match to light it were kept completed the equipment they carried. They were also armed with a sword. 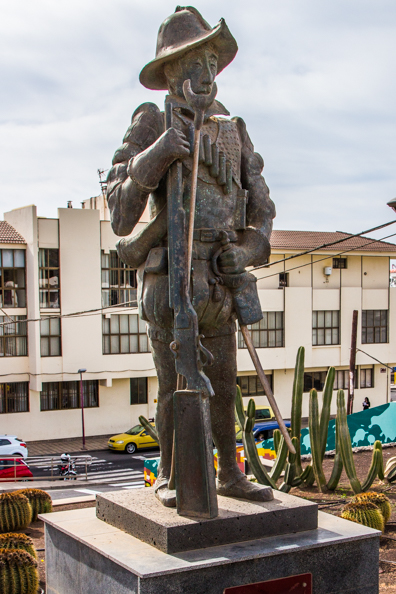 I continued to the large commercial port. The development of this large port was the reason the original inland capital of Betancuria had lost this status. As the threat from pirate raids diminished Fuerteventura needed a harbour to develop its fishing and other commercial activities. The basin on which Puerto del Rosario is situated proved to be ideal as it’s sheltered position protecting it from the prevailing winds made it easy for the loading and unloading of fishing and commercial boats. At the time Puerto del Rosario was a very small settlement of fishermen and farmers with very few facilities. As the port developed during the eighteenth century so the population increased. The commercialisation of the island’s main products, lime and saltwort (used to make soap) attracted more residents. In 1835 a municipality was created the later became known as Puerto de Cabras (Port of Goats) dedicated to Nuestra Señora del Rosario. This municipality became the capital of the island in 1860. Later its name was changed to Puerto del Rosario. When steamers replaced sailing ships at the end of the nineteenth century this resulted in a large increase in the population and an increase in commercial and passenger activities. In 1935 a second quay was added to the original harbour. 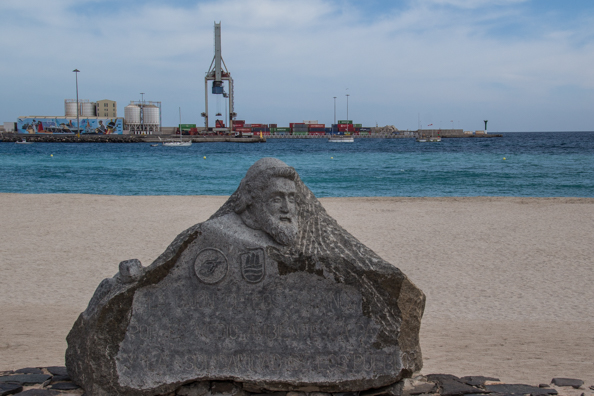 Having obtained a map from the Tourist Information centre opposite the commercial port I made my way to the town’s main square, Calle Secundino Alonso, named for its first mayor. Here I found the Church of Nuestra Señora del Rosario. This attractive building took some time to develop once it had been decided the town needed a place of worship in its centre. Building began in 1824 with the construction of a temporary chapel to be used until the main building was completed. An important development took place in 1888 when the original bell tower was replaced by a new one to house two new bells that had been brought from Marseilles. In 1928 the chapel was demolished to increase the length of the nave and in 1930 the church was finally finished. 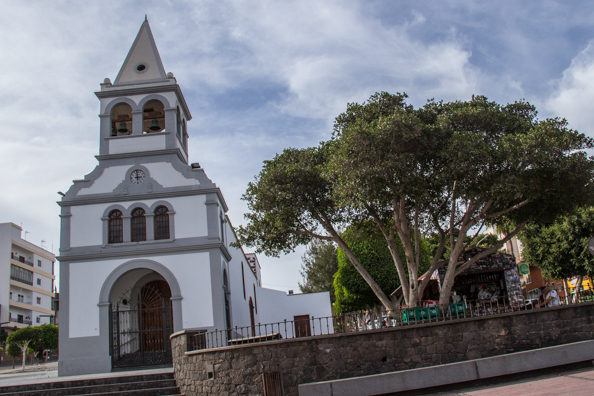 Outside the church is a statue of the eminent lawyer Manuel Velázquez who was very influential in the politics of the Canary Islands and in particular the protection and government of the smaller islands. Opposite the church is the Home Museum Unamuno. There are two interesting aspects to this museum. The first being the building itself as it is a good example of furniture and architecture on Fuerteventura from the end of the nineteenth century. The second, it relates the activities of the distinguished philosopher Don Miguel de Unamuno who lived there following his exile from Spain in 1924. His presence on the island had a profound effect on the culture of the island. Even after he escaped and made his way to Paris he continued to write about the island. His statue stands outside the museum.

In the same square a sculpture, The Cabras (goats), recalls the time these animals grazed the land that is now covered with streets and buildings. This agricultural heritage is celebrated by several sculptures around the town including a magnificent goat’s head on a roundabout, a beautiful statue on the sea front and a group of goats in the sculpture park. 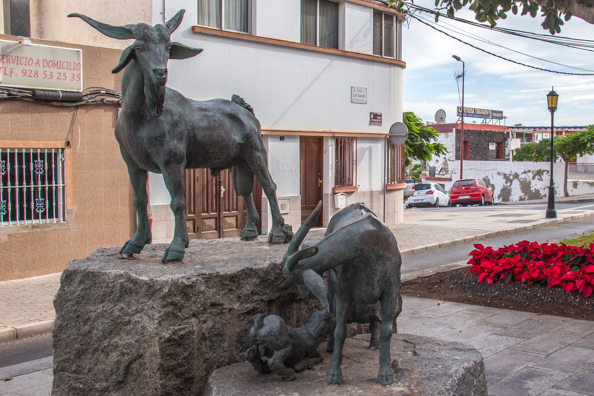 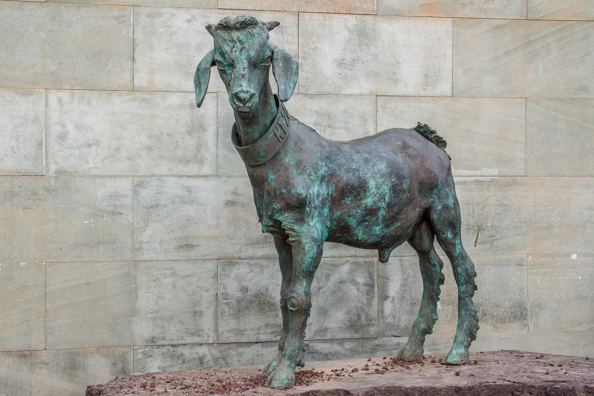 Map in hand I set off to explore the sculpture park. There must be over one hundred sculptures and statues around this town and I was determined to see as many as possible. I spent some time trying to figure out the huge creation at the start of the sculpture park, Fuente de la Explanada. It reminds us that Puerto del Rosario is the centre of trading and fishing on the island portraying naked men unloading the boats. 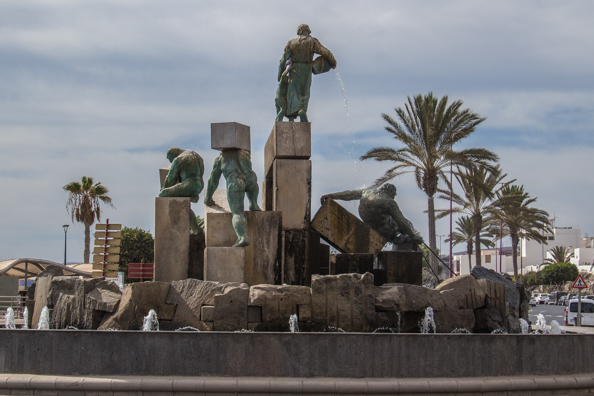 Next I found a series of large molluscs along the sea front just beyond the port. This collection, The Caracolas, represents the connection Puerto del Rosario has with the sea. 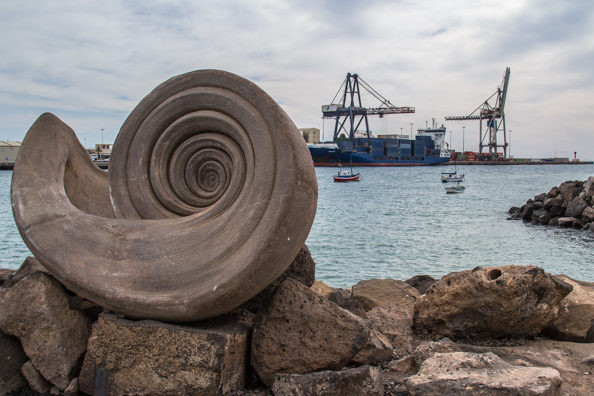 As I made my way along the sea front I encountered some interesting modern sculptures some of which defied interpretation but nevertheless were very interesting. Then I met the Pescador de Vieja who appeared to be walking towards me at the end of a long day’s fishing. Wearing a hat but no shoes this fisherman is carrying a palm basket on his back. These baskets are still in use today to carry the fishing tackle and the catch. The vieja is a type of parrotfish this is still eaten in the islands either fresh or jareada (dried in the sun). 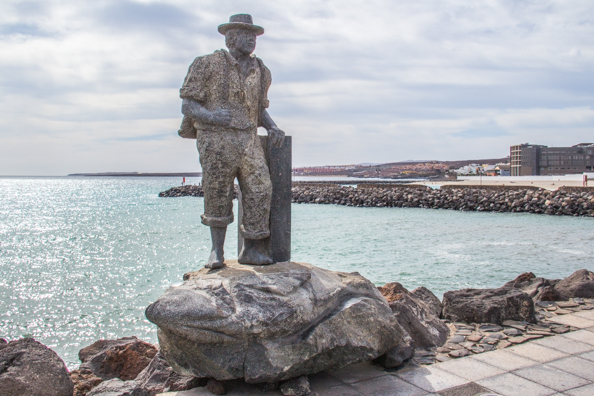 I walked along the short pier to better see the skeleton of a whale. This impressive sculpture of nature is the skeleton of a female Bryde’s Whale. This species of whale is one of the largest creatures on the plant. The female is larger than the male growing as big as fourteen metres in length and weighting as much as ten tons. A member of the toothless whale group this whale only lives in warm, tropical waters and feeds on plankton and small fish by filtration. The Canary Islands are a reproduction and feeding area for these whales which means there are frequent sightings in the waters around Fuerteventura especially in the spring and summer. This young female died of natural causes and was found floating dead near the coast of Fuerteventura. 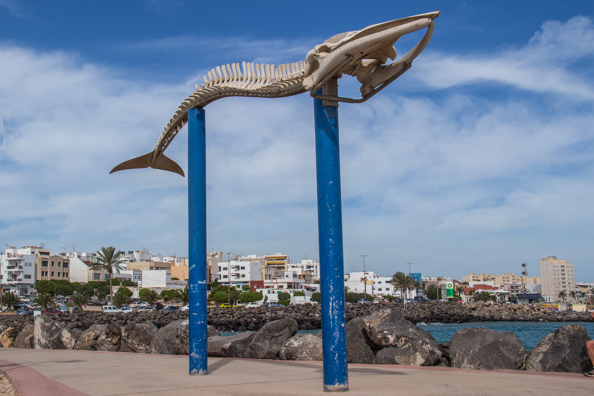 From a distance I had spotted an old building by the side of the long promenade that stretches a fair distance along the sea front. It looked like the remains of an old fortification. When I reached them I discovered it was an old lime kiln built in the mid-twentieth century. Limestone is plentiful on Fuerteventura and it was quarried, cut into blocks and then burnt in the kilns to produce lime that was used as mortar in the construction of brick buildings. Lime for whitewashing was also made from seashells. Both processes would take several days. First the limestone had to be loaded into the conical kilns alternating with a fuel layer. Once the process was complete the lime would be exported. a profitable business it ceased to be so in the 1970s when cement replaced the lime as mortar and the kilns were abandoned. 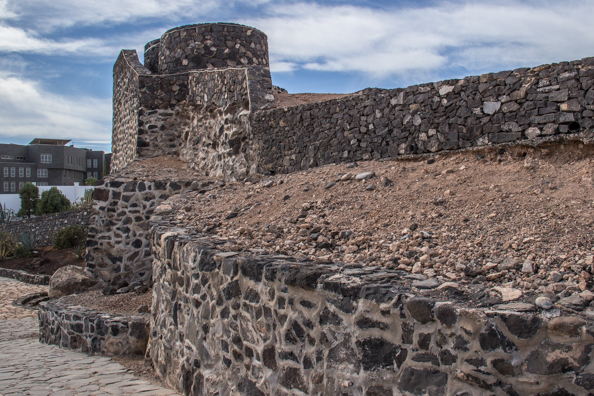 While I was admiring the old kilns I met some of the island’s wildlife, the Barbary Ground Squirrel also known as a chipmunk. These creatures are not indigenous to the island but were brought to the island in 1965 from the African Spanish colony of Ifni nica.com/place/Ifni. As the climate and environment is very similar to their native home they adapted very well and are the most visible wild mammal on the island.

On my way back to the bus station I discovered another sculpture recalling an old tradition, the water carrier or water seller. This was not unique to Puerto del Rosario but was common worldwide before the advent of a centralised water supply. The water carrier would collect water from a source such as a river or a well and then carrying it to houses to sell to the occupants. 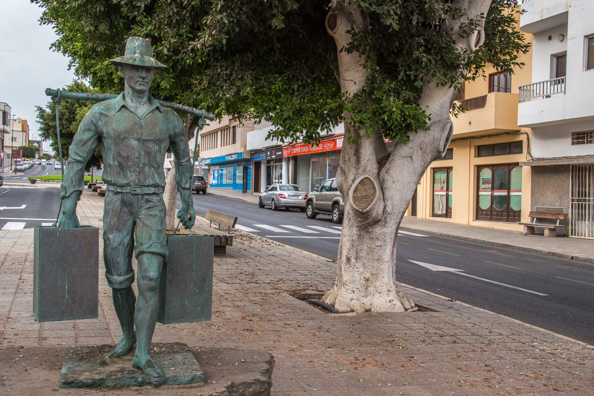 My walk around the town had been very informative about the history and traditions of Puerto del Rosario. I had enjoyed interpreting the huge variety of sculptures. My favourite was the Equipaje de Ultramar (Overseas Baggage), dedicated to those who left Fuerteventura in times of hardship. Now the tide has turned and travellers are coming to visit the island. Much as I would love to own some beautiful old-fashioned leather luggage I am very grateful to the inventor of suitcases on wheels.