Walking on the Island of Fuerteventura

Fuerteventura is the oldest but the least developed of the Canary Islands. Its natural landscape and wild coastline is a lovely environment for some good walking. The best time to go walking on this island is the winter when the fierce winds that cool the hot summer sun have abated but the weather is still pleasantly warm. We were based in the resort of Caleta del Fuste not far from the airport. Its long promenade offers a good opportunity for walks and bike rides. Fringing its coastline are some lovely beaches, some rocky, some pebbles and some sandy. The area also features some interesting attractions such as old fortifications and a large market on the outskirts of the town. At the far end of the town, close to our hotel, Elba Sara Beach and Golf Resort, is the Commercial Centre Atlántico where a Spar Supermarket sells water at very reasonable prices. As the island has very few natural water resources it relies on desalinated water which is not suitable for drinking. I needed to carry plenty of water while walking to deal with the heat and exposed volcanic landscape so I went shopping at the first opportunity. 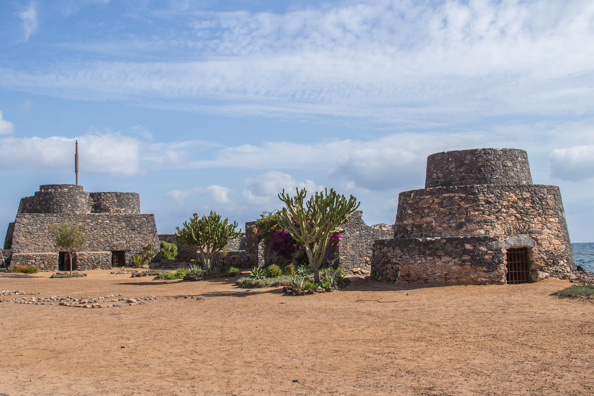 Fuerteventura is a small island so we were able to experience different areas during the week we were there. Our first walk, an introduction to the landscape and agriculture of the island started from the outskirts of the village of La Oliva. Soon after we set off we stopped by small field of prickly pear their leaves covered with white splashes. Gilles, our guide, explained that these were the bodies of Cochineal beetles. When they are squashed the produce a bright red dye also known as cochineal. This dye had once been vital to the island’s prosperity. Cochineal was originally produced and used in South America to dye a wide variety of products including food, cosmetics and material. When it was introduced into Europe the lovely red colour produced by these beetles was popular throughout the continent. However, its origin remained a secret until the source of the dye was revealed in the eighteenth century. Although synthetic pigments are now used to dye cloth these are not suitable for colouring food, drinks and cosmetics as pose a danger to humans. As cochineal is a safe food colourant it continues to be used in food, drinks and cosmetics. But it is no longer an important crop in the canaries as eighty-five per cent of today’s production is undertaken in South America by villagers in the Andes Mountains where the prickly pear also grows in abundance. 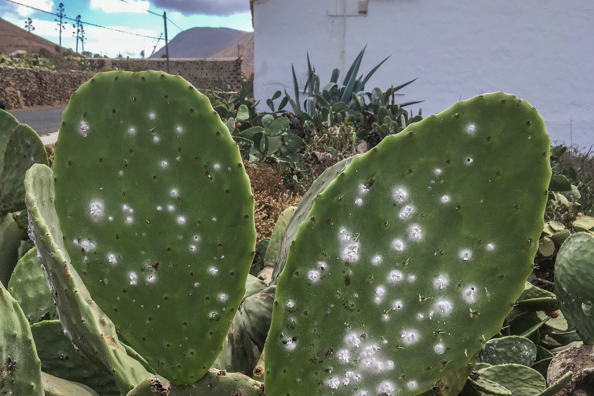 Beyond the village we started a steady ascent towards the summit of a hill. On our way we passed narrow rock-edged terraces where farmers once grew cereal crops to eke out a living from this dry land. Due to the lack of significant rainfall the island is semi-arid. Traditionally farmers on the island have always grown cereals, mainly wheat. The roasted grains of the cereals were ground to make a flour known as gofio in the Canary Islands. This flour is still made here and is used to make bread and cakes. Windmills were built in the windy areas of the island and some of them can still be seen today all over the island to grind the flour they can still be seen today. Now the most important crops are tomatoes and potatoes which are grown in irrigated areas using picón-soil which helps to avoid the loss of water. Goats cheese is a popular product on the island as goats are well-adapted to the conditions. We passed several goats nibbling the sparse vegetation surrounding us. 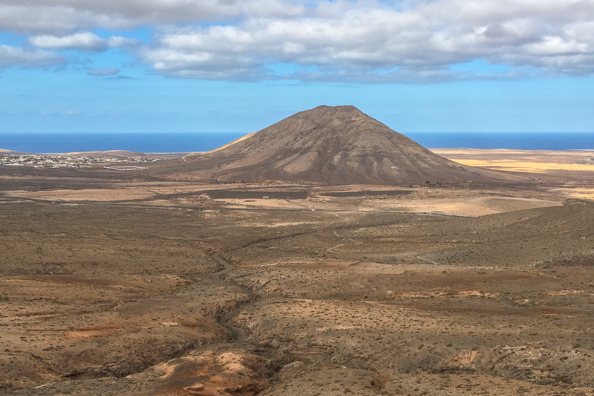 Our second walk traced some of the history of the island found in the Betancuria Natural Park. Before we reached Betancuria itself we stopped to admire the bronze statues of two former kings of Fuerteventura Ayose and Guise. They each ruled their own half of the island until the Normans conquered the island. Betancuria is named after Jean de Béthencourt a French explorer who founded the town in 1404. Betancuria became the first capital of Fuerteventura and all the Canary Islands when they were conquered by the Normans. By the beginning of the nineteenth century Betancuria was losing its power as other towns developed and finally in 1834 it ceased to be the capital. Today, Puerto del Rosario is the capital. As Betancuria is not by the sea it has not been developed as a tourist destination and is said to be the only place on the island that has preserved its genuine Canarian character. It certainly seemed that way when we strolled through the town before starting our walk. 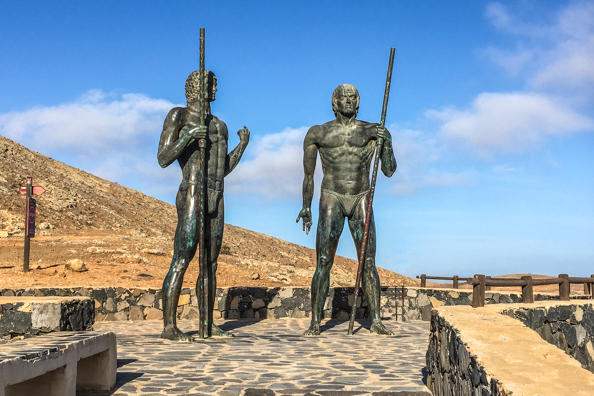 From Betancuria we walked to the small town of Vega de Rio Palmas where we picnicked in the shade of the buildings that surround its main square and visited its church, the Church of Nuestra Señora de la Peña. In the afternoon we followed a dried up river bed which led us into the gorge Barranco de las Peñitas. Both the town and the gorge are within the natural park. The gorge is the oldest landscape on the island. The river that once ran through this gorge has now dried up. A dam that was built to create the reservoir of Las Peñitas has silted up and has become popular as a climbing wall. Beyond the dam is the tiny Hermitage of la Virgen la Peña where the statue of the patron saint of the island was once housed. This statue is now in the Church of Nuestra Señora de la Peña in Vega de Rio Palmas but the pilgrimage still takes place to the hermitage. Every September, thousands of islanders dressed in traditional Canarian costume, walk through the gorge. We followed the path of these pilgrims through the gorge. 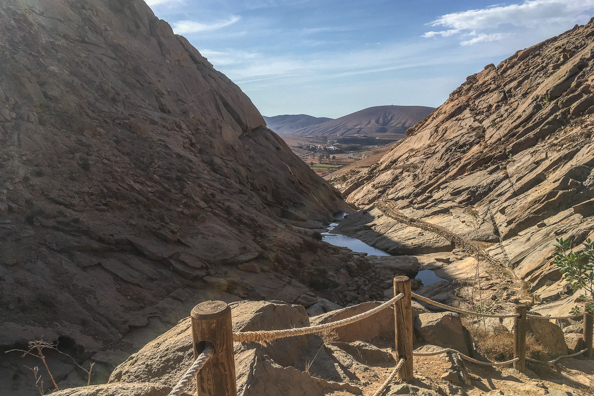 On our third walk we explored the varied terrain of the Natural Park of Jandia. After first we trekked through the fine, soft sand of some dunes. After a pause on a small plateau to take in our surroundings we were picking our way along a rocky goat track on the side of a cliff face. It is thought this was the area where the first settlers lived and it was exciting to think they may have trodden the same path. At the end of the path the only way was down and we scrambled down the cliff face to Cofete Beach. We had lunch in the shade of the imposing cliffs behind us enjoying the solitude and the sight and sound of rollers crashing on the yellow sand that stretched for miles on either side of us. 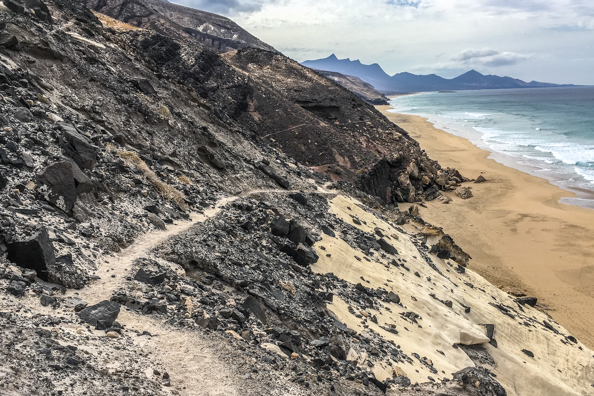 On our last organised we followed the crest trail of El Cuchillo de los Pasos in the Natural Monument of the Knives of Vigán. This extraordinary landscape was formed by explosions of lava that now resemble knives standing on end with wide valleys running between them. It was a great walk and being on a crest with dips and summits meant we could see most of the countryside we were crossing. We stopped to have a picnic under a solitary tree. The first we had seen that day. It did not offer much shade as it had no leaves. I found a shady spot under a row of succulent shrubs and sprawled on the pebbles enjoying the stunning scenery around me and sharing the amusement of my companions at the sight of several women in our group queuing to pop behind a large rock! 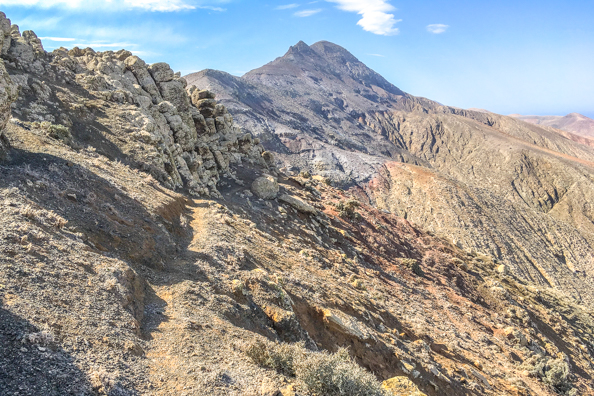 Although tourism is now the main source of income and employment on the island a building boom of holiday homes has slowed down due to the recession. Hopefully this will allow the island to concentrate on the creation of more natural parks to preserve its amazing landscapes. It is no wonder Fuerteventura has achieved the accolade of being named a biosphere by UNESCO. Of all the great places I visited my favourite was the wild El Jurado Beach. The perfect place to relax in the shelter of a wall fashioned from volcanic rocks and watch the ocean crashing around a rocky headland. 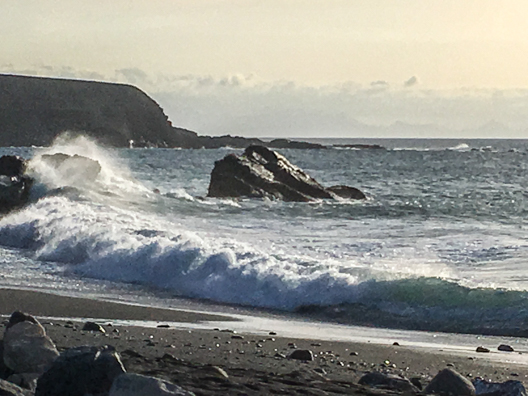