La Pigna in Sanremo - From Bottom to Top

Stepping through Porta di Santo Stefano is like following Alice down the rabbit hole. The visitor is immediately immersed in the tangle of narrow, enclosed alleyways that is La Pigna the old town of Sanremo on the Italian Riviera. Once through the thickness of the old city walls the local grocery shop emerges out of the gloom. This old city gate is one of the main entrances into the original medieval settlement. Now it is a district of the thriving modern town that surrounds it. The name La Pigna (pine cone) describes the way its streets curl up around the hill like scales on a pine cone. 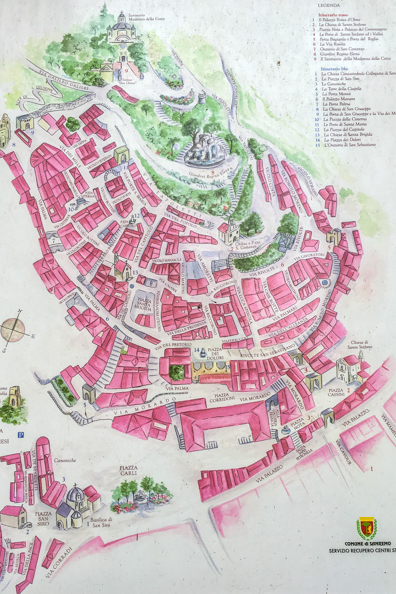 When Sanremo was briefly part of the Republic of Genoa the Genoese they built a castle on the summit of this hill. As soon as their reign ended the local inhabitants destroyed this castle as a sign of their disdain for their conquerors. These narrow, winding streets were a defence against attacks by the North African Barbary pirates but not ideal for modern living. However, today the old town is enjoying a revival and is rapidly becoming a thriving residential area once again. The quiet and cool generated by the thick stone walls outweighs the inconvenience of not being able to park a car outside your own property. 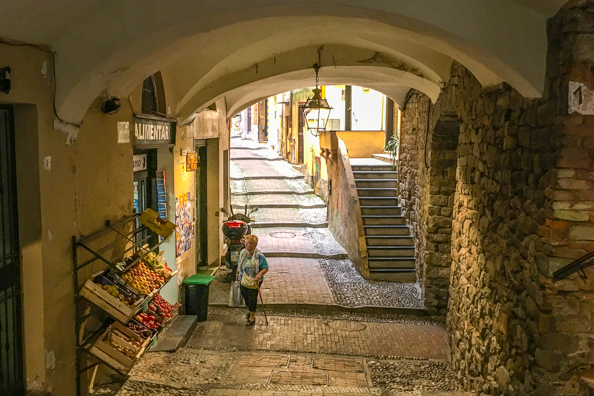 Visitors have to make a detour to enter one of the most interesting squares in La Pigna – Piazza dei Dolori (Square of Sorrows) the top section of Rivolte San Sebastiano, the main street leading into this square is closed for restoration works. Space was limited in this area so expansion was upwards. New buildings were constructed on top of existing buildings – all on shallow foundations. The bridges that stretch between the buildings are supports, not walkways. 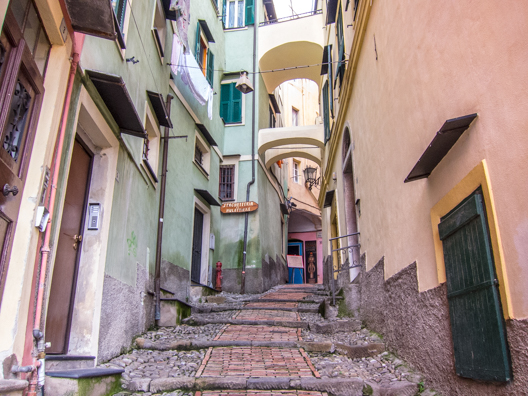 To protect the area steel girders are now being used to support the crumbling structures and protect other buildings that rely on their continued existence. 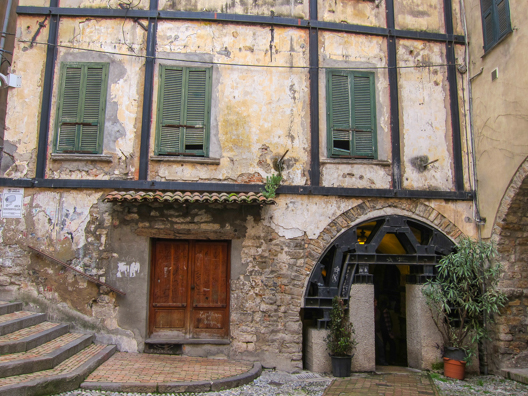 Sanremo is in Liguria in Italy and its old town is the most important of the many old town towns in this region. Piazza dei Dolori is one of its most characteristic squares. On one side of this square is the old civic or municipal palace with its arcade. This was home to the Podestà or governor. The pink, green-shuttered building is the Palazzo Gentile-Spinoia once the residence of one of the wealthiest families in La Pigna during the seventeenth century. Most interesting though is the Oratorio di San Sebastiano which is located inside what was once the municipal palace. 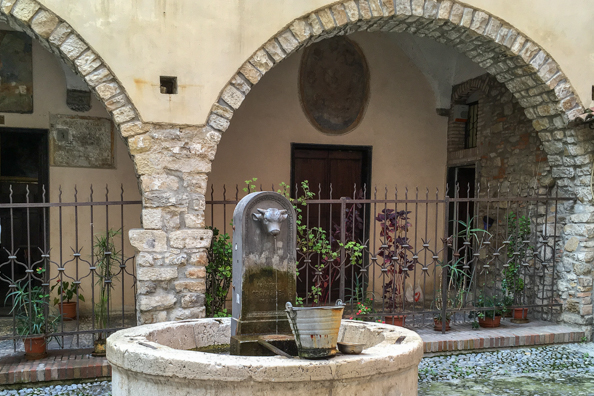 This small church was built by municipal resolution in 1505 following the salvation of the city from the plague in 1502. It was dedicated to San Sebastiano, protector against the plague. In 1762 the oratorio was given to the brotherhood of our Lady of Seven Sorrows. The interior is decorated with eighteenth and nineteenth century murals. Near one entrance is a fake plate from 1624 asking the people not to urinate or soil the area beneath the entrance, a habit of the citizens of Sanremo out of contempt for the Genoese authorities. The interior is charming and, on the one occasion I have been inside, I was enchanted by a model of the piazza showing the inhabitants going about their daily business. 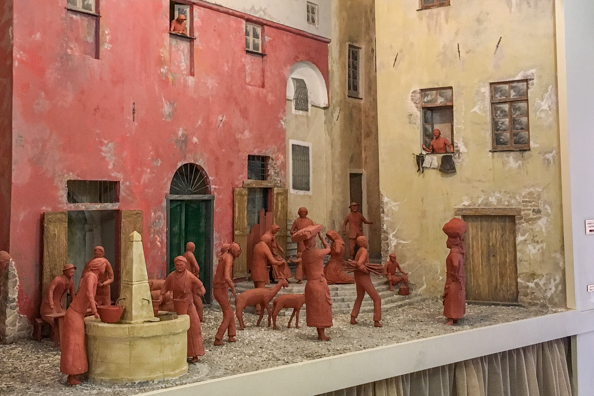 Each of the city gates represents a different period the expansion of La Pigna. Porta di Santo Stefano is one of the outer gates and dates back to the sixteenth century. It has a tower which was a means of defence against the barbary pirates. An inner gate, Porta Palma evolved into a narrow, covered passageway as a result of the construction of houses above the free ground beneath the first walls. Originally, in 3121, this gate marked the outer limit of the city. It was located on the main street that once connected La Pigna to the sea on one side and the San Romolo Valley on the other. This valley was rich in citrus orchards, olive groves, farmed fields, flour mills and oil mills. Today this access is located inside a dwelling. 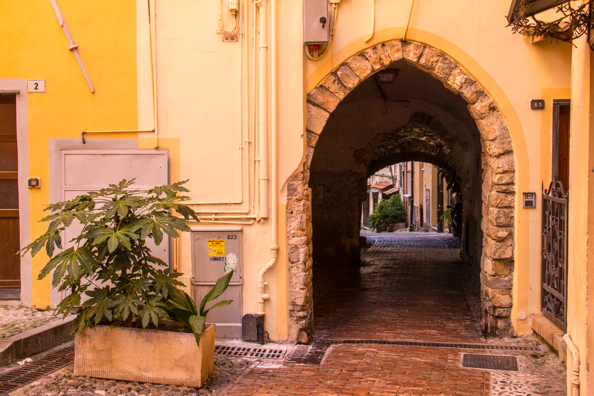 La Piazza della Cisterna formed part of the new western quarter of the city. This extension dates from the late medieval period to its completion during the sixteenth and seventeenth century. It was a working class neighbourhood where farmers, artisans and labourers lived. Hence improvements to the water systems were necessary and were realised through the construction of a large cistern. The structure beneath the square goes back to the seventeenth century. It collected rainwater that was fed through a system of channels and drains. The cistern is completely coated with an impermeable plaster, according to an ancient and effective technique. 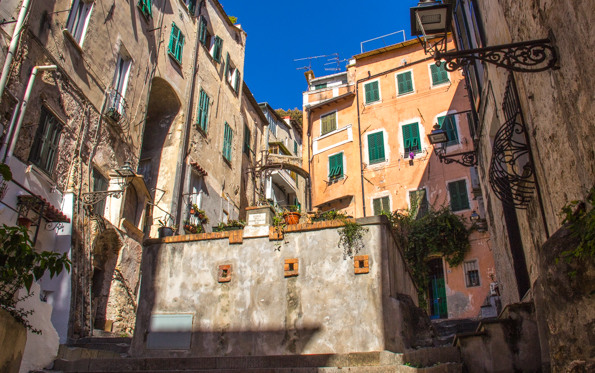 La Chiesa di San Giuseppe is the parish church of Pigna despite being on the outskirts of the district. It is easily reached from every part. It is close to the wall with the apse actually protruding through it. It was built here as the area was not wanted for residential development as this neighbourhood expanded. After much planning and discussion, the church was built sometime around 1684. It underwent significant refurbishment during the eighteenth century. Porta di San Giuseppe nearby takes its name from this church even though the gates were built before the church. This gate was built as a for the new quarter of the city that had developed beyond the Porta Palma after the fifteenth century. The gate still has the ancient wooden knockers and a defensive chamber above the entrance from which assailants were attacked through a trapdoor. 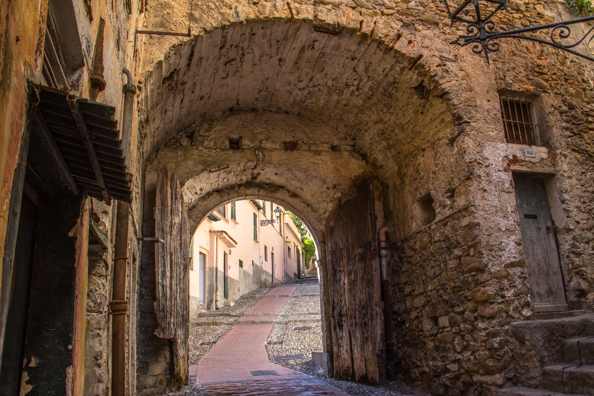 Eventually all routes through La Pigna lead to the Giardini Regina Elena. This park is located in the highest part of historic old town. It was built to fill the gap created by two events. The demolition of the castle by the Genoese in 1754 following the rebellion of the city the previous year and the earthquake of 1887. These two events meant the buildings on the summit were unsafe and had to be demolished. They were replaced by these beautiful gardens at the end of the nineteenth century. The park is dedicated to Queen Elena wife of King Victor Emmanuel III and for many years a guest and friend of Sanremo. 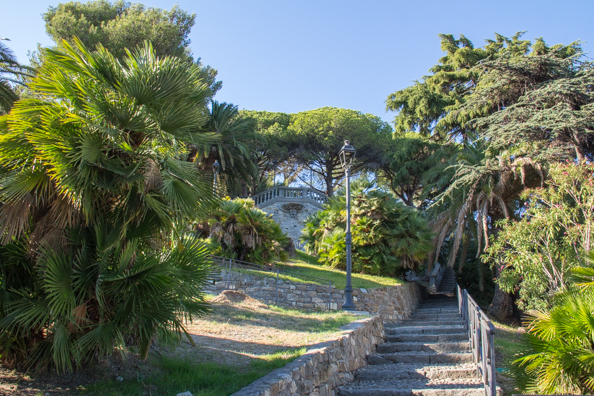 At the top of the garden are some small viewing platforms. I took advantage of these to enjoy the panorama of Sanremo – old and new – spread out below me. I spent some time up there enjoying the cool breeze and trying to spot some landmarks in the town. 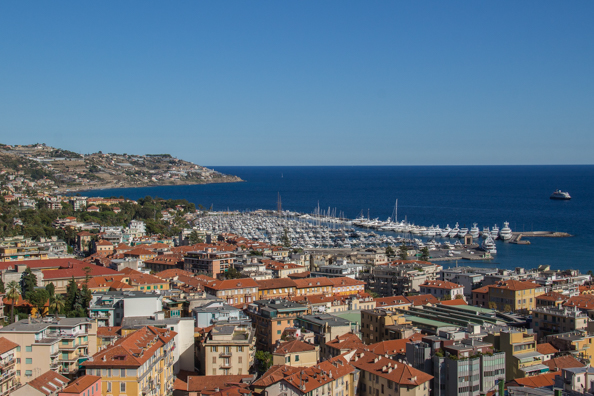 Emerging from the gardens onto the road that leads back into the town I spotted one of the symbols of the town the beautiful church, Santuario della Madonna della Costa. Its foundations date back to medieval times with elements from the fourteenth century and fifteenth centuries. A major transformation was completed during the seventeenth century when a new façade and dome was added. Its elegant interior is rich with works of art but don’t be fooled by the white ‘marble’ statues. They are actually made of wood and painted white to resemble this stone. 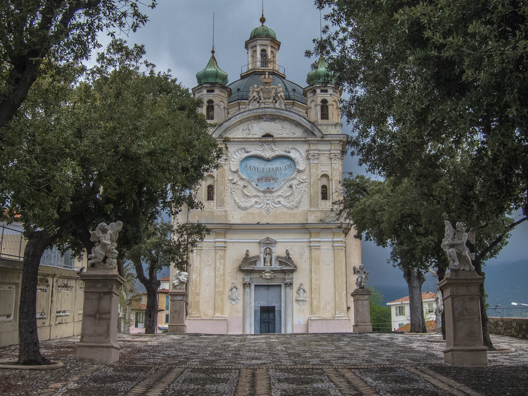 Leaving the church I had three choices to get back into town; walk straight down the main road; catch a local bus; or walk through a different section of La Pigna. I chose to plunge back into the old town taking the steep, straight passageway that once led into the town through Porta Montà. The gate itself no longer exists but the road remains. On this road is the Sapia Palace, the property of the one of the town’s most important families. Napoleon Bonaparte was a guest here in 1794 during the French offensive led by General Masséna. I made quick progress through this, the newest, section of the town as the streets were wider and straighter. I soon arrived in Piazza Eroi Sanremesi and the end of my adventure in Medieval land. 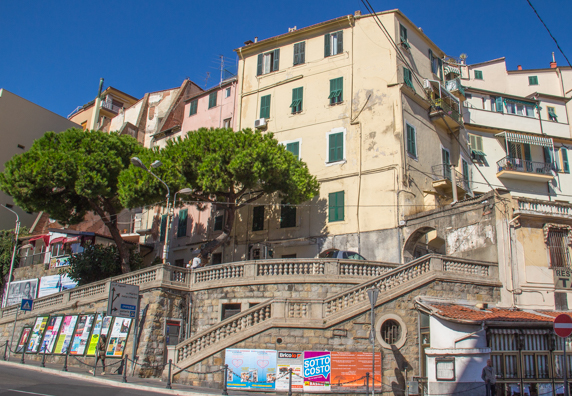