A Memorable Encounter in Bordighera on the Italian Riviera

I was perplexed. The signs I had been following had petered out for a third time. As I stood on the hill above the Porta Sottana inside the old town of Bordighera two distinguished gentleman entered the old town. For a split second they were perfectly framed by the old gate. Without thinking I raised my camera and pressed the shutter. After a brief conversation the two men parted and the one pushing an antiquated bicycle walked towards me. As he drew level with me he asked if I had taken a photo. Sheepishly I admitted that I had. I fell into step with him and asked if he knew the whereabouts of the Fondazione Pompeo Mariana. 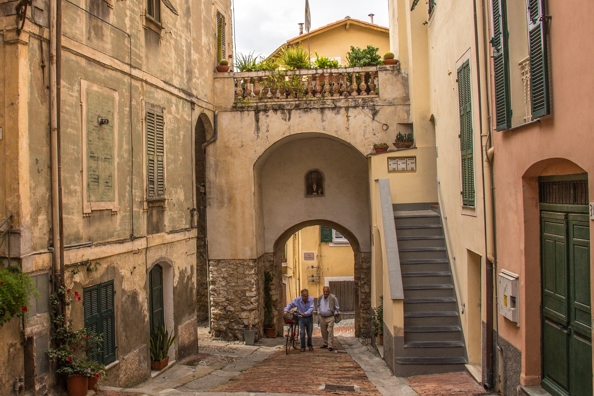 As we walked we talked. I told him that my visit to Bordighera on the Italian Riviera had started in the centre of town where I had quickly discovered the Tourist Information Centre. I was given a town map, a list of important places to visit and a suggestion that I start by walking along the sea front. As the railway runs along the sea front in Bordighera I had to find one of the regular underpasses that go under the railway line. As I came into the town I had seen an unusual church and decided to re-trace my steps and have a closer look. Chiesa dell’Immacolata Concezione does not look typically Italian. It was designed and built by the French architect Charles Garnier who decided to give it an Asian twist. Garnier was famous as the creator of the Paris Opera House and the casino of Monte Carlo but he left his mark on Bordighera where he spent a lot of his time. Garnier died before the church was finished and his son Christian personally financed and completed the works which included the bell tower. 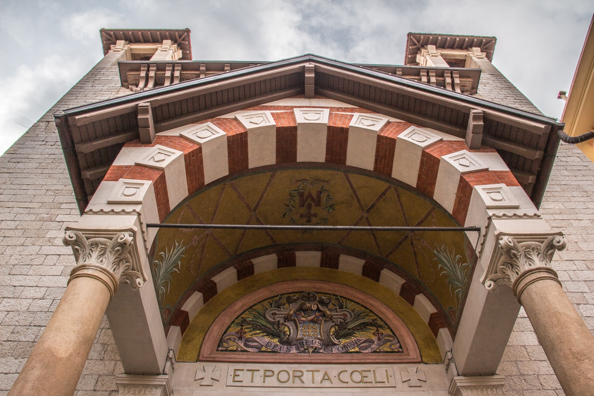 A long, wide promenade snakes along the sea front of Bordighera. Unlike other towns on the Italian Riviera the railway line has not been moved away from the coast but it is not intrusive. As the summer was drawing to a close the beach was deserted but the restaurants on both sides of me were already full of people. They were probably enjoying an Italian favourite, a café corretto – an espresso livened up with a liquor of choice. 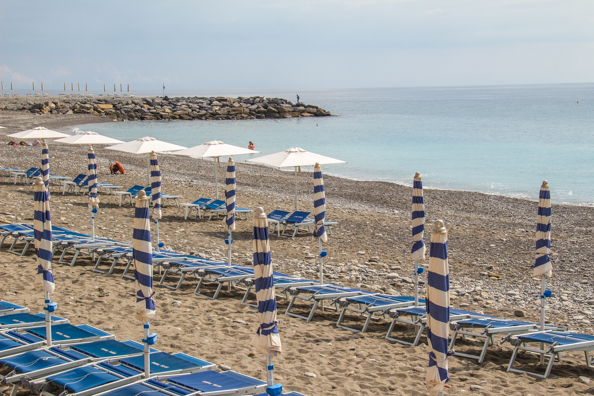 At the far end of the promenade is a rocky promontory, Capo Sant’Ampelio, the southernmost headland of Liguria. According to local legend Sant’Ampelio, the patron saint of Bordighera, lived in a cave amonst the rocks. Today a pretty church, the Chiesetta di Sant’Ampelio, is perched on these rocks. The original Romanesque building was constructed during the eleventh century but it has been modified and restored. The most recent restoration was in 2015. 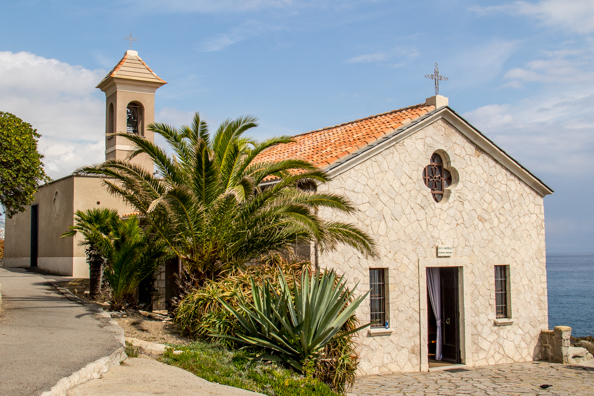 After exploring the church, I was drawn across the road by the sight of a very elegant statue seated in its own garden. It is Queen Margherita of Savoy once queen of Italy. After her husband, King Umberto 1, was killed Margherita spent a lot of time in Bordighera. She bought the Villa Etlinda (originally Villa Bischoffsheim) which was surrounded by a large park. Margherita built a new villa, Villa Margherita in this park and spent several months in residence every year until her death in 1926. The Villa later became a museum but since 2014 it has lain abandoned. 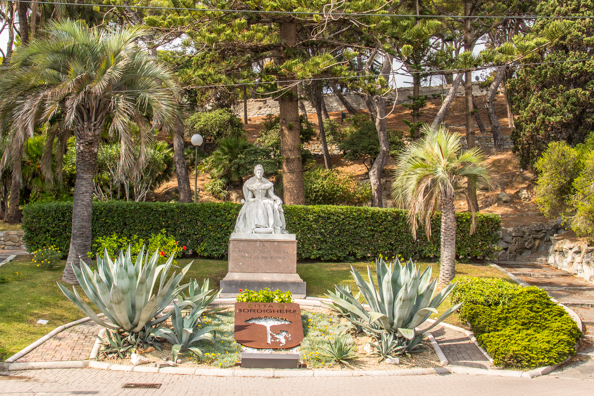 Below me I could see the pretty harbour of Bordighera and above me the wooded Spaniata del Capo I decided to walk down to the little port first. This port is a working port and the fishing boats were quietly at anchor. Above the harbour I could see the elegant Villa Garnier. This villa was designed and built by Charles Garnier as his own residence in Bordighera. Today the villa is used for monastery stays. 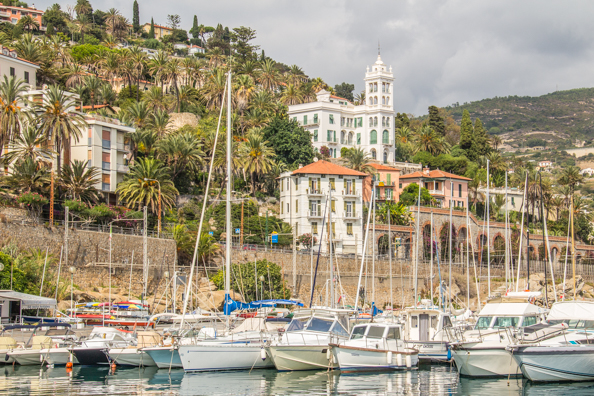 Turning my back on the harbour I climbed up to the top of the Spaniata del Capo via a series of steps and paths. It was cool and quiet in the wooded area. On the top is the marabutto museum that features a collection of cannons and a very small museum that contains information relating to the town but will always be closed to the public. It is certainly a very pretty spot with lovely views along the coast. 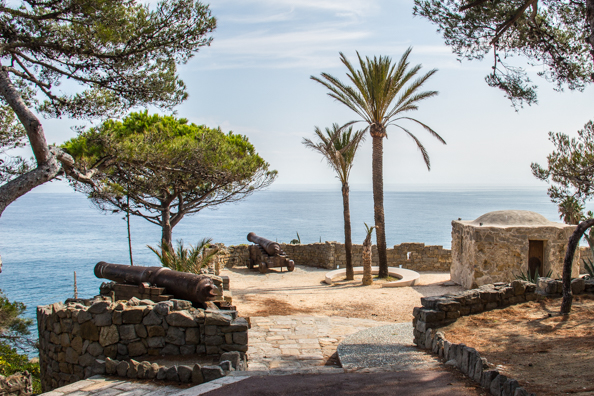 Descending from the Spaniata del Capo I crossed the large car park at the foot of the hill and entered the old town or Bordighera, through the Porta del Capo. At first I thought I had stepped into a large restaurant but then realised there was a narrow passage ahead of me that took me into the main piazza, Piazza del Popolo. This intriguing medieval settlement is clearly still a popular residential area. In its main church Chiesa di Santa Maria Maddalena, final preparations were going on for a wedding that was about to take place. As the congregation had not arrived yet I could explore the interior. I waited for ages in the hope that the mother of the bride might step aside and let me take a photo but she was too busy checking the final arrangements so I had to include her. Stepping out of the church I could see another gate in the city walls, Porta Sopra (Maddalena) though which I got a tantalising glimpse of the sea beyond the old town. 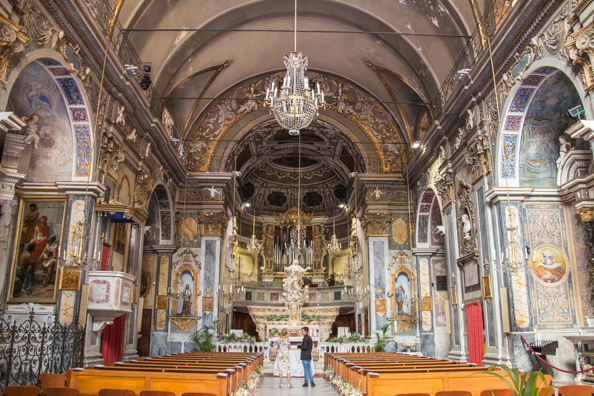 I found the wedding party in the next square, Piazza Padre Giacomo Viale, seated outside a restaurant enjoying a substantial lunch. For many years Padre Giacomo Viale was an active member of the Fraternity of Bordighera and his statue graces the centre of this square. He was the parish priest of Bordighera for fifty years and during this period he promoted shipyards, restored and built churches, founded a nightclub and a hospice for the poor and elderly. The buildings of two institutions founded by his brother-in-law, San Giuseppe, a house of rest and the former Civic Hospital enclose this square. 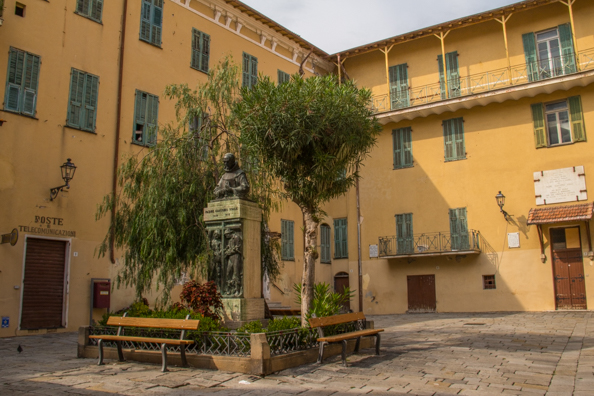 I re-traced some of these steps with my new friend. We walked slowly as he had to push his bicycle up several flights of steps. At the top of the steepest flights of steps he pointed out the path that led up to the Fondazione Pompeo Mariana and then announced that he was going to park his bicycle and come with me. I was very grateful that he did accompany me as I would never have found it alone. We followed a narrow path lined with the walls enclosing the gardens of the residences on either side until we came to a very ordinary wooden door. The building was identified only by an inscription above this gate. The gate was locked and two other would-be visitors were on the phone trying to contact the proprietor. My friend asked to borrow their phone and requested the proprietor to come and open the gate for his visitors. The proprietor was running and area but we were informed he would be back in five minutes. An Italian five minutes as it turned out. We were given a guided tour of the gardens – minus my friend who had taken a photo of us and then gone on his way. The gardens are home to some exotic and very unusual plants as well as the villa that houses the foundation. 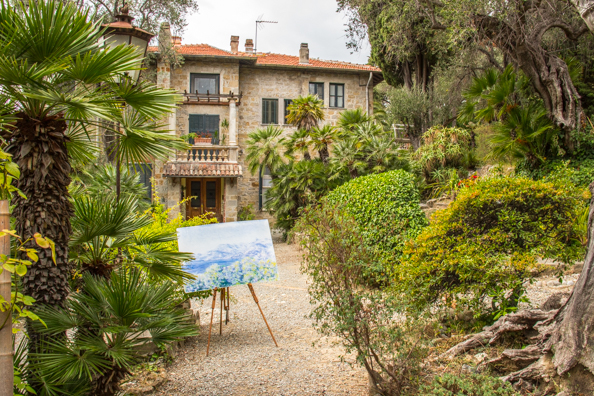 Villa Pompeo Mariani, built in 1885 by Charles Garnier, was once the home of the painter Pompeo Mariani. After he died in 1927 the villa was left empty for a long time. In 1998, following major restoration and refurbishment the house, workshop and garden were opened to the public so that they could appreciate the arts and crafts of the period when Pompeo Mariani lived there. Ancient olive trees and exotic plants inhabit the garden, originally a part of the historic Giardino Moreno. It was in the Giardino Moreno where Claude Monet painted some of his masterpieces in 1884. Our guide took us on a tour of the garden showing us some rare plants and some old plants. He was very proud of the one-hundred and twenty-year old fig tree standing tall and erect in front of a cluster of bamboo. He suggested we should also make an effort to see another fig tree of the same age at the entrance to the old town. I had already seen it and had been very impressed. 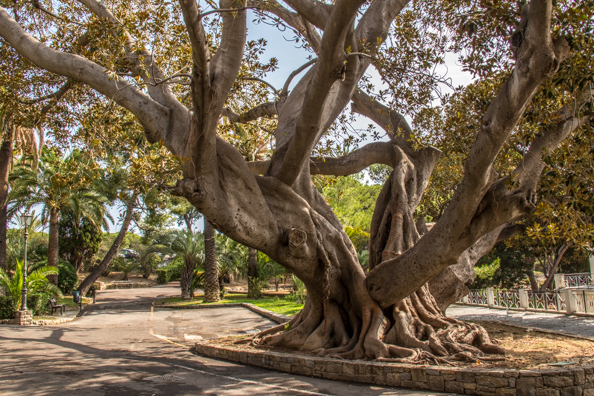 When I left the old town I made my way back to the town centre along Via Romana. When visitors began flocking the Riviera to enjoy its temperate climate and natural beauty Bordighera quickly became an exclusive resort. Thousands of olive trees and palms that had surrounded the old town were destroyed to make way for its wealthy visitors. At the end of the nineteenth century elegant villas graced the slopes above the town and the number of visitors was greater than the local population. The town was particularly popular with the English who created their own community in the town. A leading light during this period was Clarence Bicknell who founded the Clarence Bicknell Museum-Library once the hub of all things literary in Bordighera. This museum was the second home of the International Municipal Library created by the British in 1883. It was moved to its present home, also on Via Romana, in 1910. Originally, this library was housed in the Anglican Church. This church is now a cultural centre owned by the municipality. 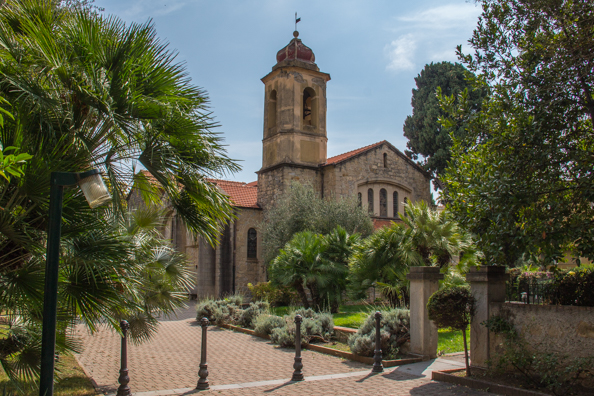 The highly-rated Giardino Esotica Pallanca is quite a long walk from the town centre but I love gardens and this one sounded very special. I was glad I made the effort as this garden, cleverly cut out of the sandstone of the ancient Monte Nero volcano is amazing. On display are cacti of every imaginable species, around three thousand. Since 1910 four generations of the Pallanca family have nurtured and extended this garden. In 1989 the family decided to open the garden to the public. Today, due to the assortment and large variety of species it is the most important garden of its kind in Italy and one of the most interesting worldwide. I loved it and was in awe of the incredible variety of cacti – some in brilliant bloom, some taking on the appearance of small pebbles – they were fluffy, spiky, contorted. Terraces and greenhouses overflowed with them. 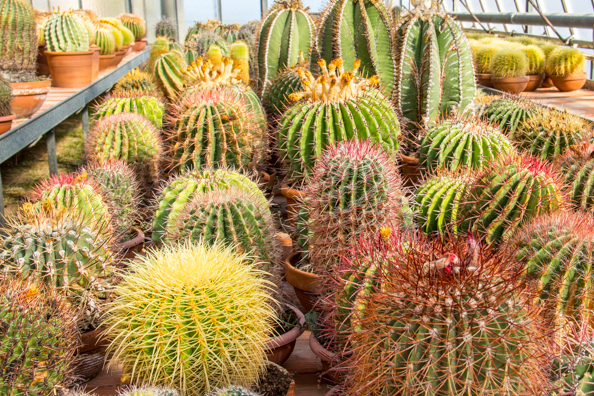 At the very top of the garden I sat on a step and enjoyed the sight of the Italian Riviera below stretching to either side of me. 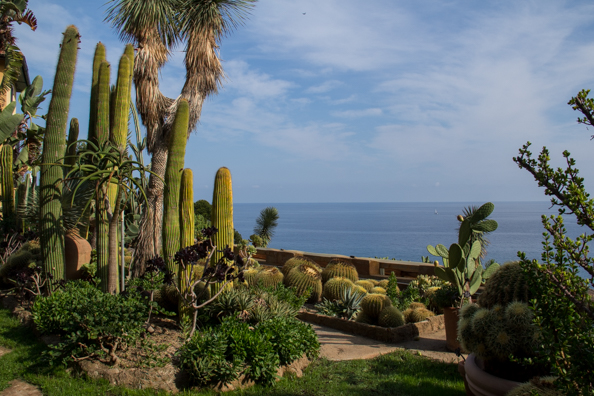