I accepted an invitation to visit the bamboo grove in Damyang, as the idea of a journey through the South Korean countryside after the bustle of Seoul was very appealing. I had visions of wandering through cool, green avenues of bamboo plants but there was a big surprise in store for me. Damyang is in the province of South Jeolla whose climate favours the growth of bamboo a plant this is not common in other parts of South Korea. The area, one of the greenest in the country, is more renowned for its organic farming than its tourist attractions. This made it all the more special and interesting. On arrival I was not sure I was in the right place as there was not a bamboo plant in sight just a very pretty formal garden – Juknokwon garden. After visiting the eco-exhibition centre near the entrance I strolled past a beautiful artificial waterfall, two pavilions and a fountain before I spotted any bamboo trees – a whole forest of them. 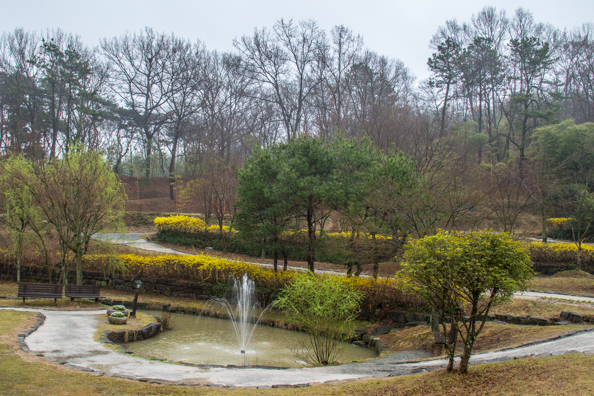 I joined a path that took me through a tunnel of bamboo stalks that all looked exactly the same. I was surprised to learn that there are 1,400 species around the world. These tall, tree-like grasses are fast growing perennials. Some can grow as much as thirty centimetres in a day. They have hollow, woody stems know a culms and they grow in clusters from a thick underground stem. They vary in height from fifteen centimetres to more than forty metres. Although they grow quickly they only flower and produce seeds after they have reached twelve years of age and only once in their lifetime. The main path branches off in different directions. There are eight loops each with a different name. At the end of the Trail of Philosophers I found the statue of a famous philosopher but I did not find love on the Trail of Eternal Love. I did a lot of thinking on the Trail of Thoughts in particular I thought it would be nice to spend some time relaxing in the hammock I had found strung between some bamboo trunks. There were very few people around (probably because it was raining) so it was cool and peaceful with an ethereal mistiness. 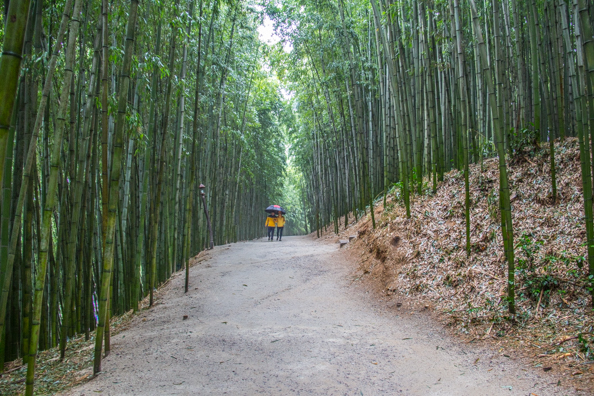 Bamboo is a very useful plant as the seeds of some species are eaten as grain and the young shoots are cooked and eaten as vegetables. The raw leaves can be used as fodder for animals. Fine quality paper is also produced from the pulped fibre of some species. Its jointed stems are the most useful; the largest stems are made into planks to build house and rafts; large and small stems are tied together to make scaffolding on building sites; other products include buckets, pipes, furniture, flooring, walking sticks, fishing poles, garden stakes, garden ornaments and socks. For centuries bamboo has featured in Oriental medicine and artists and poets often depict its beauty and utility in paintings and verse. Given this long list of uses I should not have been surprised to discover that bamboo leaf ice-cream was on sale in the souvenir shop. It is delicious, very refreshing with a hint of flavour. I did not have time to try the bamboo leaf doughnut with bamboo sugar. 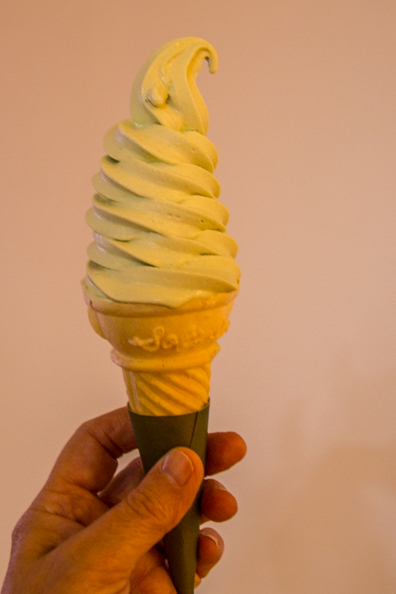 The Korean artist Lee Lee Nam is celebrated in the Art Centre in the same building as the souvenir shop. Lee Lee Nam Art Centre is in the same building as the souvenir shop. He creates amazing works of art combining Japanese traditions with modern technology. I was mesmerized by a video that portrays a sprig of cherry blossom as the seasons change around it. It is particularly beautiful when the snow is falling on it. Then in the spring butterflies flit in and out of the blossoms. Some of his creations feature up to eight video screens. My favourite featured some springs of bamboo that flutter slightly in a breeze as day turns to night and the bamboo is illuminated by a brilliant moon behind them. His work is simple and stunning. A photograph cannot do it justice but that did not stop me from trying … 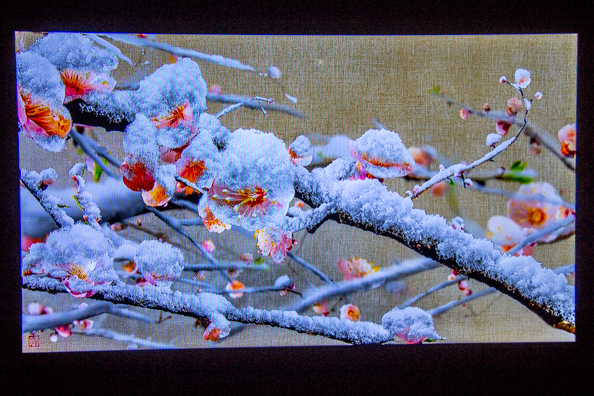 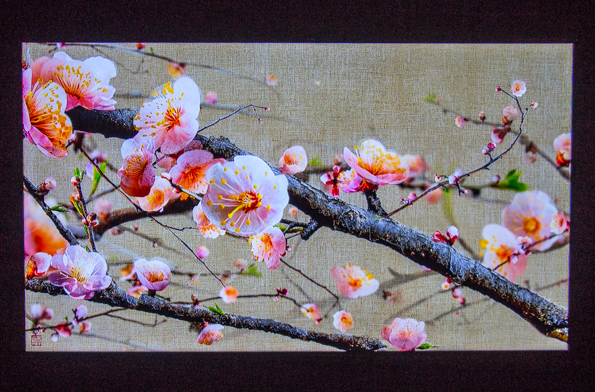 Not far from the bamboo garden is a tree-lined avenue. Over eight kilometres long this an avenue with history as it is planted with majestic deciduous conifers, Metasequoia glyptostroboides, more commonly known as the Dawn Redwood. These trees, which are native to China had been designated fossil trees as they were thought to be extinct. But then, in 1940s a tree that was found growing near a shrine in China was tested and found to be a Metasequoia tree. As a result of further investigations over four thousand Metasequoia trees were discovered in the same area and the tree was re-established as a living species. In 1956 the Metasequoia was introduced on to the Korean peninsula and planted alongside the roads and also used in the landscaping of gardens. By then the species had become popular for use in urban areas due to its ability to tolerate polluted atmospheres as well as its attractive appearance. It is a deciduous conifer with an interesting reddish brown textured bark and bright green, feathery foliage that turns a bright copper colour in the autumn. Widespread planting of these trees took place in Damyang during the 1970s as the result of a government urban tree-planting initiative. At the beginning of the twenty-first century road-widening schemes involved the destruction of thousands of these trees. To preserve some of these trees and to create a tourist attraction Damyang established an avenue of these trees parallel to a main road. 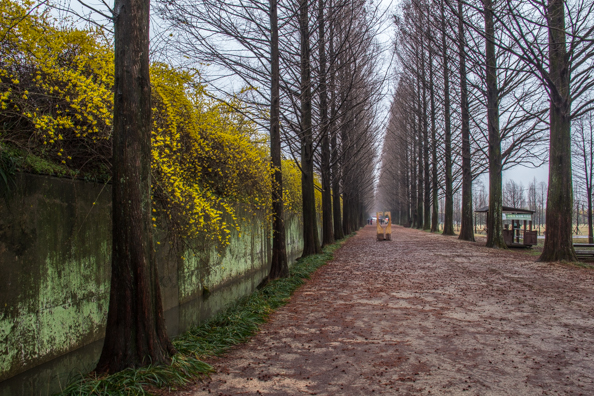 Looking down the avenue I was impressed by the sight before me – the trees stood like two rows of giant soldiers on parade, lined up on either side of a wide path. It was spring and too early for their summer foliage but these elegant trees with their twisted bark were still remarkable. It is not surprising that the Korea Forest Service chose this boulevard as one of the most beautiful roads in Korea. As I began walking I realised there was a stream running behind the trees to my right. Soon after setting off I came to a collection of wooden totem poles hanging up on my left. In Korean culture totem poles are known as jangseung or village guardians. Traditionally, they are placed on a village boundary to ward off evil spirits. They are also worshipped as gods. In the murky post-rain- atmosphere they looked quite scary. In the middle of the path is a large wooden heart that visitors can use to frame creative images. 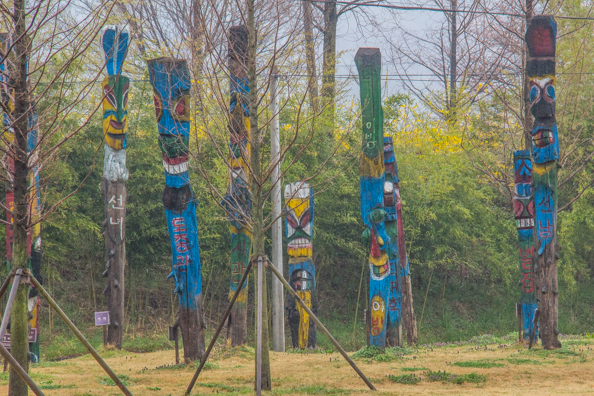 I did not have time to walk the entire length of the avenue and had to finish at the Strawberry Experience Field. Strawberries were in season and after a quick look at the regimented mounds that were topped by the strawberry plants I went into a marquee to buy some. I was greeted by a wave of excited chatter. The local nursery school children were having a picnic in there – featuring strawberries. They were very happy to pose for a photograph. It was a lovely way to finish my visit to Damyang. 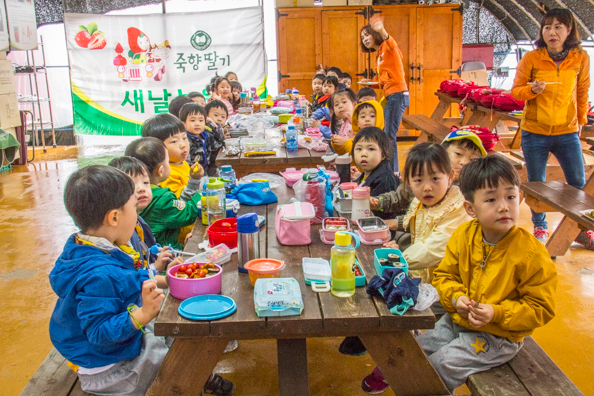