Strolling by the Kiso River that runs through Inuyama a small town in Japan I paused to watch some cormorants drying their wings in the sun. Safe in the knowledge they would not be working that night as the cormorant fishing season was over they looked relaxed and content. I was on my way to the old castle town to visit Inuyama Castle. The path up to the castle perched on the summit of a hill, took me through two shrines. I entered the Sanko Inari Shrine through several red torii gates. These gates are a typical feature of Inari shrines. There are thousands of these shrines in Japan dedicated to Inari, the Shinto god of rice. Pure white foxes guard the gates often holding keys or rolled up messages in their mouths. They are the messengers of Inari and are generally thought to be helpful. However, there are rumours that they can bewitch as well. There is a small pond inside this shrine and it is said that money washed it its water will double in value. It didn’t. 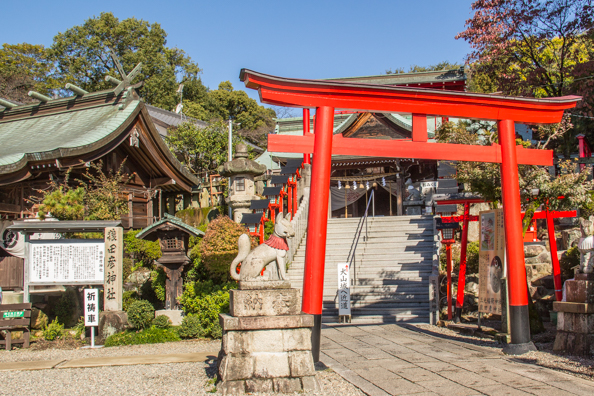 A statue of a white horse stands guard in the Haritsuna Shrine. Horses are very significant in the Shinto religion as they are considered to be intermediaries between this world and the kami – the main objects of worship for this faith. White horses often perform at Shinto festivals known as matsuri. Every spring the Inuyama-matsuri Festival is celebrated at the Haritsuna-jinja Shrine. This festival started in 1635 and features large mulit-storey floats. In the evenings these floats are lit with hundreds of Japanese lanterns. 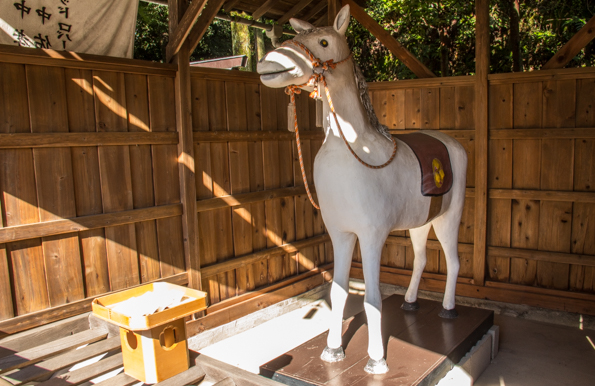 When I arrived at Inuyama Castle crowds of people were milling around the entrance taking of their shoes and storing them in lockers. I stuffed my shoes in my rucksack and climbed up the four flights of steep steps to the top floor. The steepness of the wooden steps was a defence mechanism and not easily mounted by someone with legs as short as mine but I made it to the top. I was rewarded by a great panorama from the viewing platform that surrounds this floor. Below me were the grounds of the castle and beyond those the grounds of old merchants’ residences stretched down to the banks of the Kiso River. This river is also known as the Rhine of Japan due to its scenic resemblance to the River Rhine in Germany. Shooting the rapids and watching the traditional use of cormorants to fish for smelt (in season) known as ukai are popular activities on this river. Beyond the river is the sprawling urbanisation of Inuyama which literally translated means Dog Mountain. My attempts to take a selfie sitting on the balcony were thwarted by a hyper-active room guard who chased me around the balcony until I had to admit defeat and make my way down to the floors below. 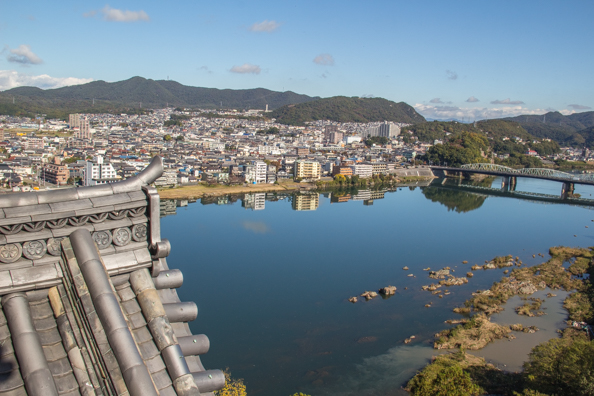 It did not take me long to explore the castle as it is quite small. Inuyama Castle is often claimed to be the oldest castle in Japan as the original building was completed in 1440. Since then it has been subject to major modifications and its towers were built in 1537 and its main keep or donjon was built at the beginning of the seventeenth century. It was unique because it was privately owned until the it was seized by the Japanese government during the Meiji restoration period. Four years after suffering damage during an earthquake the castle was returned to its original owners in 1895 on condition that they repair it and maintain it. It remained in private ownership until 2004 when the building and grounds were given to a local civic foundation in Inuyama. 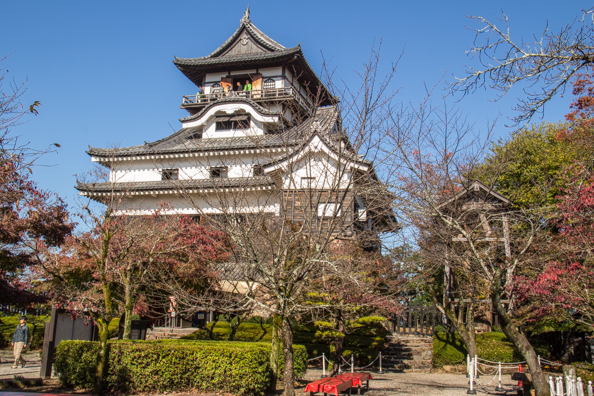 While strolling through the streets of Inuyama, a delightful mix of traditional wooden buildings and modern structures I purchased a picnic to eat at my next destination Meiji Mura, an open-air historical park. Located on a hillsides facing Lake Iruka this park, southeast of the city centre, features over sixty Meiji buildings. It was during the Meiji period that modern Japan emerged from its old feudal system and began to adopt Western culture and technology. Historically valuable wooden buildings were destroyed to make way for state of the art steel, concrete and glass Western architecture. Determined to preserve some of the most valuable buildings that were due to be destroyed Dr Yoshiro Taniguchi (1904-1979) was the driving force behind the establishment of the Meiji-mura Museum. He was also the museum’s first director. The buildings that were selected for conservation were brought to Meiji-mura and reconstructed in their original form. Buildings were brought here from locations as far flung as Hawaii, Brazil and Seattle was well as Japan. Great care has been taken in the placing of these buildings in their park location. As the museum occupies such a large area two railroads have been laid in the village and the first Meiji street cars and steam trains are used to transport visitors around the park. 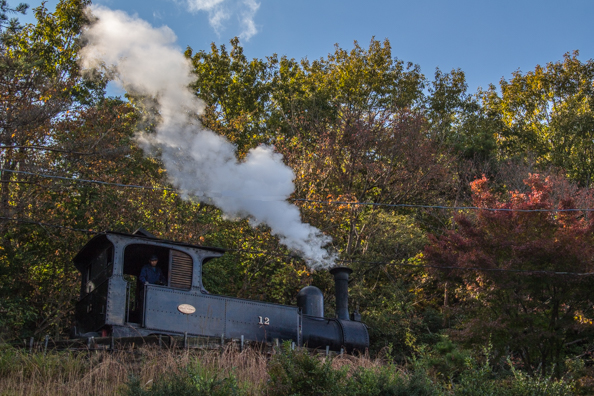 As the park covers such a large area I decided to take advantage of the shuttle bus service to travel to the furthest point and then walk back. After locking my rucksack in one of the lockers provided at the Main Gate I was ready to explore. But first some lunch. Disembarking the shuttle bus in Area Five I found the perfect spot for a picnic – a grassy area overlooking the re-constructed Imperial Hotel. that was built in Tokyo in 1923. It was autumn and the trees around me were clothed in stunning autumnal colours. 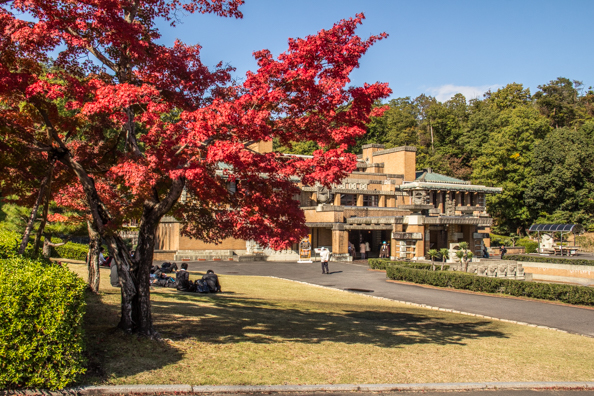 On my way back to the main entrance I visited a hospital, a church, army barracks and a whole street of residences and shops. One of the shops hired period costumes to visitors who then paraded up and down the street posing for pictures. It was a very happy atmosphere enhanced by the presence of large groups of school children as the Meiji Mura has also been developed as a place of learning. On occasions I was surrounded by groups of giggling youngsters anxious to practise their English. They each took it in turns to repeat the phrases they had learnt by rote in the classroom and then screamed with delight when I said I came from London. I paused for a while at the Kureha-za Theatre built in Osaka in 1868. Inside a group of Japanese children were taking a class. 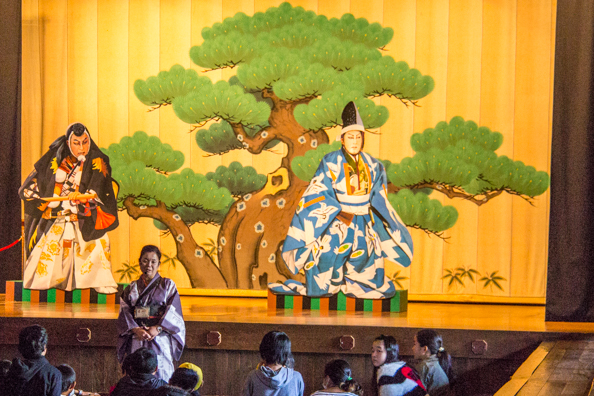 Saint John’s Church sounded so sounded frightfully English I made a special effort to find it. This beautiful church was built in Kyoto in 1907. The exterior is a delightful blend of Romesque and Gothic architecture. Its black and white beamed interior, reminiscent of English churches I have visited, features a bamboo blind in the ceiling – an indication of its origins. This church is situated in one of the quieter areas of the park. A chance for some peaceful relaxation and reflection before returning to the bustle of the mainstream. The setting and design of this open-air museum ensure a great day out for its visitors – I loved it. 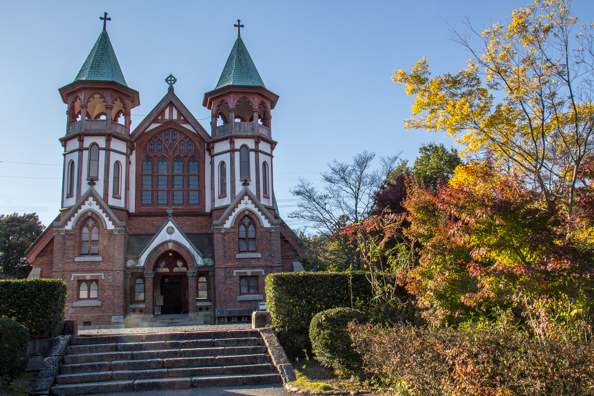