Weymouth in Dorset - a Royal Favourite

After King George III visited Weymouth on the Dorset coast in 1789 and declared “I never enjoyed a sight so pleasing.” this seaside town has been a popular place for holidaymakers. Thereafter George III, who suffered ill-health, regularly visited the town. It was during his reign that fresh air and bathing in the sea became recognised as being beneficial for good health and a cure for tuberculosis. King George himself swam in the sea. In those days, people changed in a bathing hut on wheels that was then dragged into the sea to allow the occupant to slide discretely into the water. A replica of the bathing hut used by King George III is displayed at the far end of the wide Esplanade that runs alongside the extensive sandy beach. 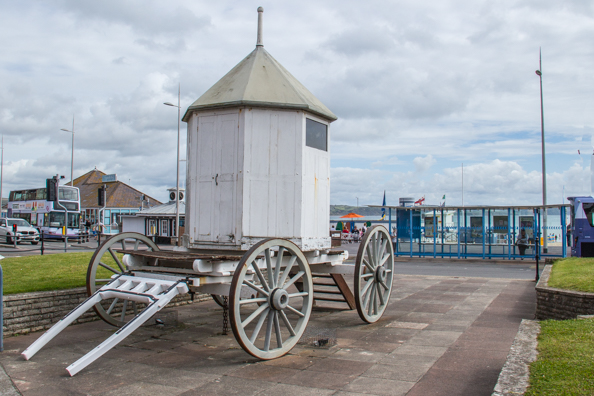 The regular presence of a king in town sparked a frenzy of building which is reflected in the names of pubs and hotels – the George Inn and the Royal Hotel are just two examples. Lest visitors to Weymouth forget its most famous patron a large monument was erected in the centre of town. Erected in 1810 at the junction of the two main streets of the town, St Mary Street and St Thomas Street, it stands on an island in the middle of the road. 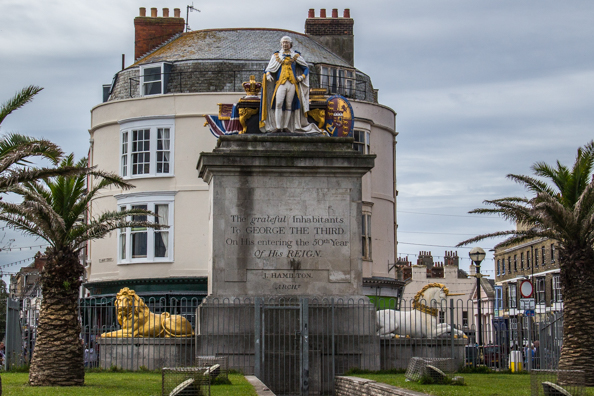 I walked along the Esplanade beside the golden sand of the main beach. Watching parents and children alike enjoying the traditional attractions of the sea-side brought a smile to my face. I was disappointed to discover I was too heavy to ride on a donkey. I would have had a go on the helter-skelter but there was a long queue of dads clutching their offspring. I did stop to watch the Punch and Judy show where an enthusiastic audience of all ages was joining in a chorus of “Oh no he didn’t.” 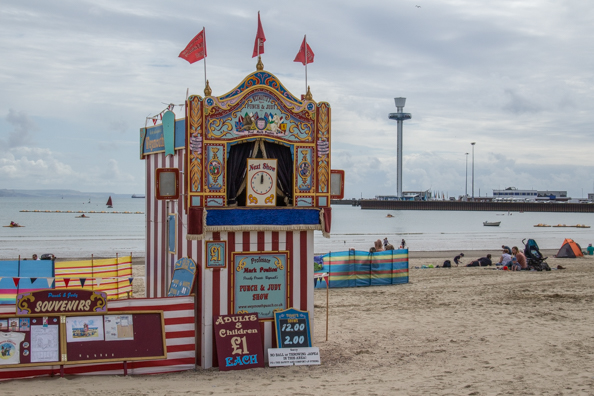 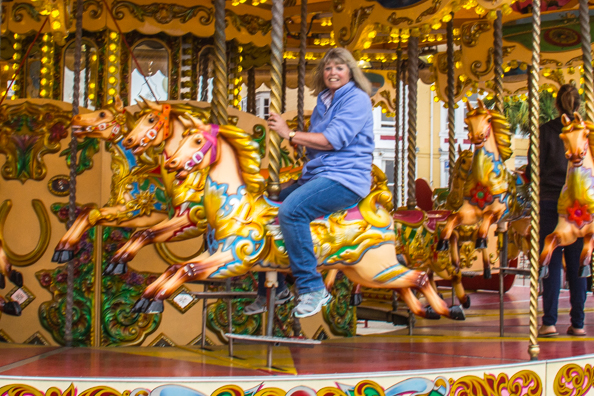 In the absence of a Tourist Information Office in the town I had been directed to the Pavilion as they had town maps available in reception. The Pavilion was completed in 1908 in response to a need to entertain the increasing number of visitors to Weymouth. Initially it was the only source of entertainment in the town. When war broke out in 1914 the Town Council decided the building should be leased to a local businessman. In the 1930’s, following a decline in its popularity, the Pavilion was adapted to show films and it soon became the most popular cinema in town. During the Second World War it was requisitioned by the military and was damaged in an air raid. After the war the Town Council reclaimed the building but failed to secure compensation for the damage it had suffered. In 1949 it was once again leased to a private company and re-opened as the Ritz Cinema only to suffer severe damage in a fire two years later. This time the Town Council succeeded in its claim for compensation and the original Edwardian theatre was demolished. Work began on a new theatre and ballroom in 1958 and the new building, appropriately named the Pavilion, was opened in 1960. Since then this building has survived many threats of destruction and today it is a busy, lively venue for a variety of activities.

Armed with a map of the town I set off for Nothe Fort also known as North Fort. There is a regular ferry service that crosses the harbour between the two piers (£1 each way for adults, 50p for children) but I chose to walk. I made my way to the town end of the Pleasure Pier to cross the lifting bridge. As I approached the Town Bridge I was hoping it would lift up to allow tall shipping to pass through to the Marina on the other side of it. Over the years six different bridges have been built here to link the towns of Weymouth and Melcome Regis – now united under the same name, Weymouth. The present bridge was built in 1930 and is scheduled to lift every two hours. Despite not seeing the bridge lifting I enjoyed walking along the water’s edge watching the favourite pastime here – crab catching. Parents and children were engrossed as they leant over the edge of the walkway trying to entice crabs onto their lines with slices of raw bacon. 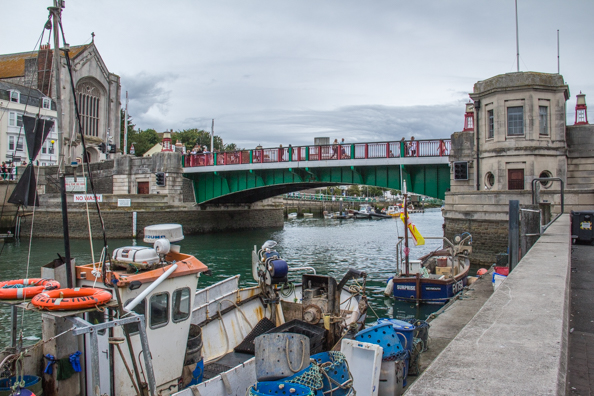 I walked through the Nothe Gardens to get to the fort. This tree-ringed grassy area was littered with families indulging in a picnic and a kick-about. As the gardens slope down to the cliff edge I had a good view of the coastline and the fort at the entrance to Weymouth Harbour. 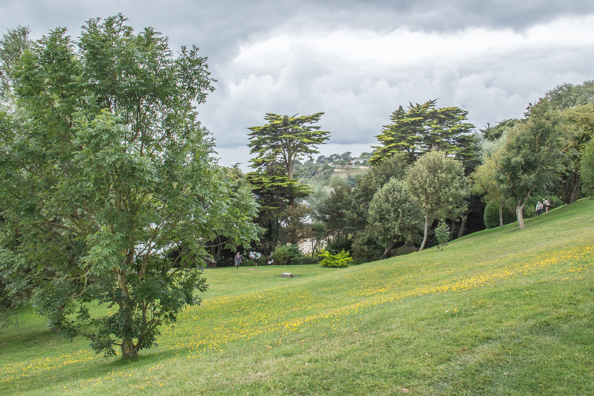 Nothe Fort was built to protect Portland Harbour further along the coast. It was constructed on three levels comprising ramparts, gun decks and a maze of underground passageways. During the Second World War it was adapted to deal with modern warfare. Today visitors can stroll around the ramparts appreciating the strategic position of the fort in relation to the Jurassic Coast and examine the artillery on display there. The day I visited the fort it was Family Day and the courtyard was full of stalls and games all surrounded by enthusiastic visitors. The establishment of this fort as a major attraction in Weymouth was truly a labour of love and is well-documented. Volunteers have been vital to the process and continue to be so as they are the people who man this fort today. 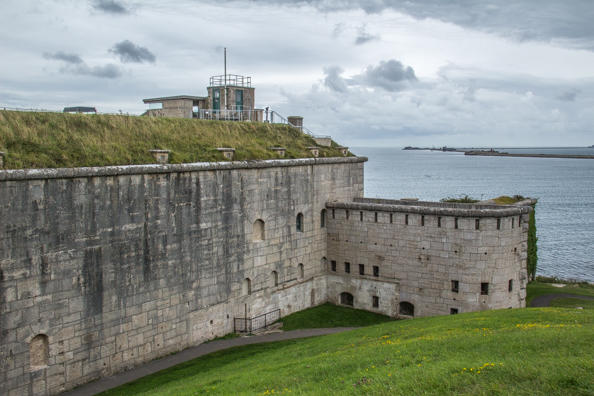 After exploring the fort, I walked back along the harbour pausing to watch the tall ship Pelican setting sail. A beautiful sight. 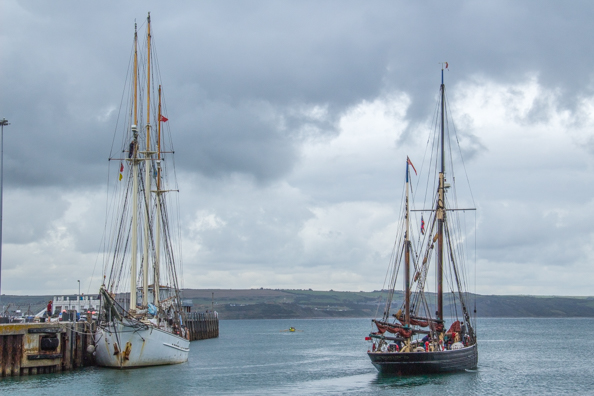 At the town end of Weymouth Harbour there is a cluster of pubs and restaurants some offering a traditional Weymouth dish, the mackerel bap. I had resisted the aroma of fish and chips when I first passed this way but I did not succeed a second time. I was drawn to the Seagull Cafe, reputedly the oldest fish and chip shop in Weymouth. I decided to try their battered mackerel fillets with chips. Delicious. 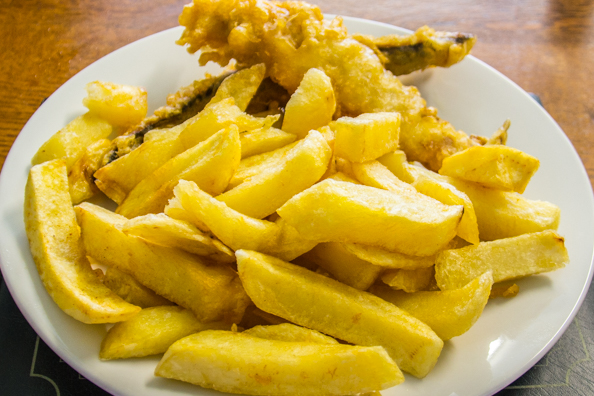 As I left the cafe I noticed an impressive building at the end of Trinity Street. On my way to investigate I discovered the Tudor House Museum. Built at the beginning of the seventeenth century it is a typical home of the period. The present building was one of a pair of houses but during its restoration by a local architect it was converted to a single building. Today, Weymouth Civic Society own the house which is open to the public and staffed by enthusiastic volunteers. 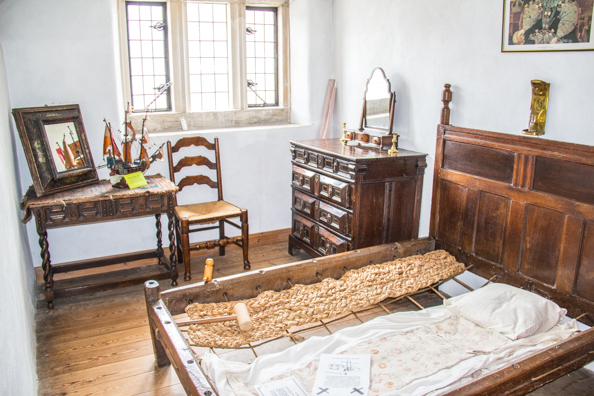 Trinity Street leads into Hope Square that is dominated by Brewers Quay, originally a Victorian Brewery. When it ceased to operate as a brewery it became the Weymouth Museum and that closed it housed an emporium that also closed down recently. Now the local council are exploring ways of re-developing this impressive Grade 2 Listed Building. 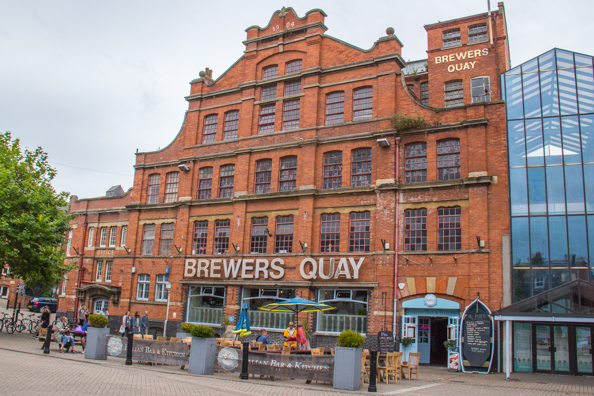 I walked back to the sea front through the town – a maze of streets lined with shops of every variety and peppered with enticing tea shops. As I strolled along the front I passed the iconic Jubilee Clock that was erected in 1887 to celebrate the Golden Jubilee of Queen Victoria. Beyond the clock I found a line of backless beach huts, clearly they were meant to be like that as they were all the same, but this did not provide much shelter. It was a while before I realised that this unusual design allows a strong wind to blow through the structure without bowling it over! 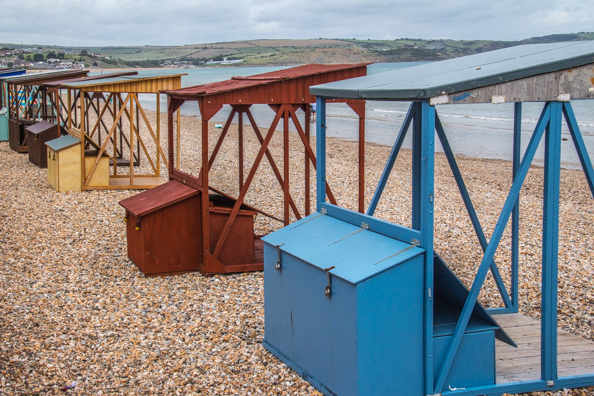 Strains of music drew me further along the Esplanade – hits of the 60s, 70s and 80s were advertised on a board outside the Greenhill Gardens. These gardens were a riot of brilliant blooms and I settled down to enjoy the entertainment. The gardens were established in 1871 on private land owned by Sir Frederic Johnstone who later became a Member of Parliament for Weymouth. These gardens were open to the public during the day. In 1902 the gardens were given to the local authority. Two years later the local authority bought some land from Sir Frederic Johnstone to extend the gardens and include tennis courts, a croquet lawn and a bowling green to be used by the rapidly increasing population of the town. After the First World War a shelter and a café were built in the gardens, forty-eight beach bungalows were erected and the existing facilities were improved. Most of the work was down through the Unemployed Relief Schemes which also provided half the cost. Since then other attractions have been added to the gardens including the Stainforth Weathervane and the Floral Clock. 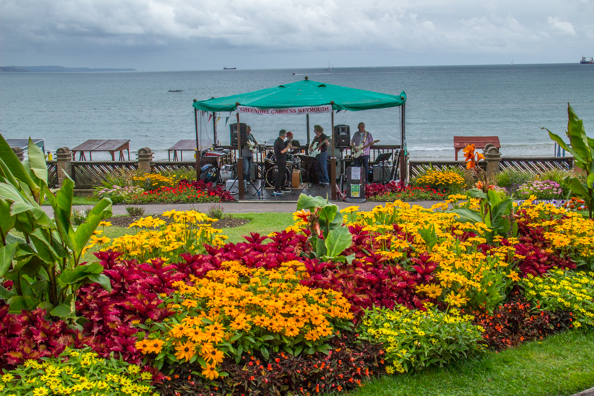 After leaving the gardens I continued along the Esplanade and ten minutes later I came to a path that led to the main road. On the other side of this road is the entrance to Lodmoor Country Park. This park is a Mecca of amusements that can keep a family occupied for a whole day. The attractions vary from a nature reserve and a park area to a miniature train and Sea Life which is just inside this park. I really enjoyed my tour of Sea Life that features a mixture of indoor aquariums and outdoor pools. The Ocean Tunnel is amazing as huge sting rays and sharks glide through the water above the heads of visitors. I arrived at the enclosure of some Short Claw Asian Otters in time to see them being fed. After eating these endearing creatures spend some time playing ‘catch’ with stones before settling down for a siesta. 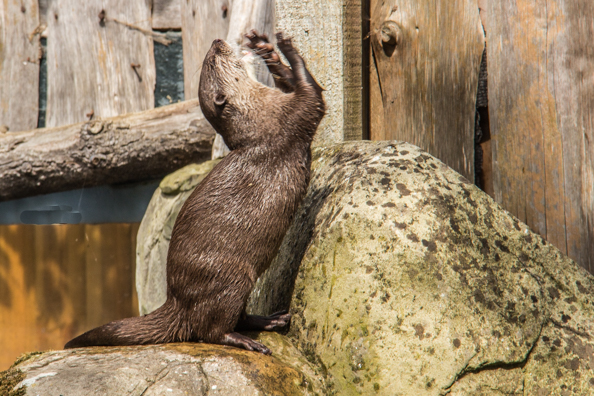 Next to Sea Life is the temporary summer exhibition SandWorld. This is a truly amazing display of huge sand sculptures. Thanks to the quality of its golden sand that makes it ideal for carving intricate detail Weymouth has a long history of sand sculpture. Fred Darrington initiated the tradition of sand sculptures on the beach at Weymouth during the early 1920s. Fred passed his skills on to his grandson Mark Anderson who still exhibits both on the sea front and is also responsible for the creation of SandWorld. Every summer a new exhibition is put together featuring sand sculptures by leading proponents of the art including Mark who is an award winning World Master Sculptor. My personal favourite was Madagascar. I was captivated by the exquisitely carved expressions on the faces of the animals. It was the perfect end to a great day in Weymouth. 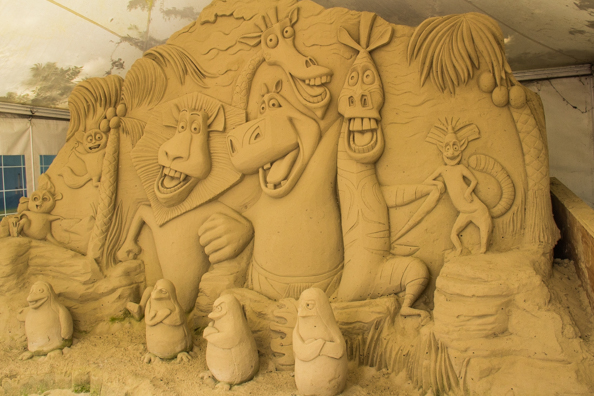