The Walks of Wareham in Dorset

Situated between the Rivers Frome and Piddle in idyllic Dorset countryside Wareham is well-placed for walks to suit all ages and standards. The Two Rivers Walks are short, circular trails following footpaths and quiet roads alongside the rivers Frome and Piddle that flow through the town. The Walls Walk and the Town Walk are around the town. Maps of these walks are available in the Tourist Information Office which is inside the library. That was the first place I visited. The library is close to the Quay on the River Frome and i strolled down to the waterfront before going for a walk. 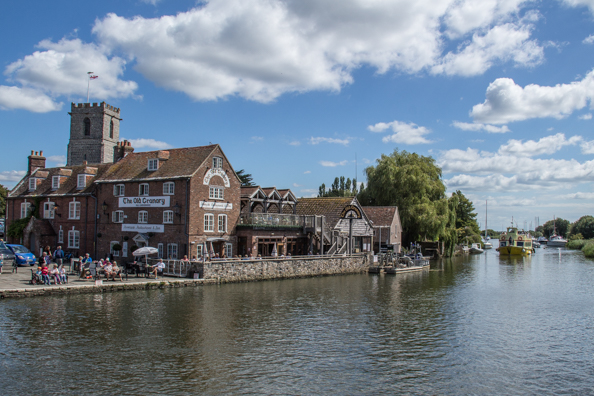 The quay is a popular meeting place and patrons of the Old Granary Restaurant were overflowing onto the bank of the river. As the name suggests this restaurant occupies a building that was originally a grain store. At one time Wareham was a more important port than Poole as boats would come through Poole harbour on their way to Wareham. Grain was one of several items imported through its harbour. The river has silted up a lot since then and it is hard to imagine it was once a busy commercial port. I walked across South Bridge to get a good view of the river and was just in time to see the Brownsea Island Ferry that originates from Poole coming into Wareham. I also discovered the Community Performance Platform. This area is available for ‘local musicians, actors, dancers, poets, storytellers and puppeteers to give concerts, recitals and other types of performance suitable for this public area.’ The platform was established in memory of the son of the benefactor, Mark Northover, a well-known resident of Wareham who loved his home town. 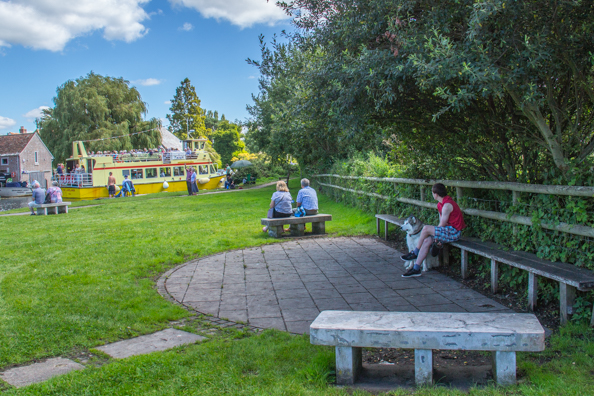 I had to walk into the centre of town to find the start of the Walls Walk. Although, being Saxon walls they are, in reality, large grass mounds. Wareham is famous for these walls that were built to defend the town against the Vikings. The Romans had established a pottery industry in Wareham and its prosperity continued as it became Dorset’s most important Saxon town and developed into a thriving medieval market town. Soon after Wareham had become Dorset’s largest town it’s decline began when William the Conqueror destroyed half the residential area to build his impressive castle. After his death the town was the focus of conflict between his grandchildren as they battled for his crown. By the fourteenth century the castle had been abandoned and quickly fell into ruins. Today, all that remains of Wareham Castle is a mound and a ditch. A large house, Castle View, now stands on its site. Opposite this house is a doorway into the walled garden of the Rectory. The door is set in an archway believed to have been harvested from the castle ruins. During the Civil War Wareham was a battle field. In 1762 two-thirds of the town was destroyed by fire. Georgian architecture predominates in the town now. But, on my way to the start of the Walls Walk I passed the medieval town pound where stray animals were kept. It has now been taken over by the Town Pound Art Project. 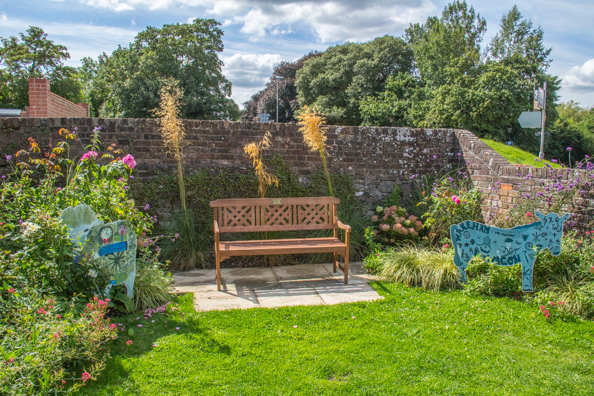 In my enthusiasm to start walking on the walls I went straight up on to the top. I missed the first Information Board. These boards are on the ground next to the walls and I only realised I had missed one when I came down from the wall to read the second board. It was only a short distance to re-trace my steps to read the first board so that I could read the story of the walls in sequence. The information boards were a great source of information as they covered the history of the town, the different activities that would have taken place on and close to the walls and also the flora and fauna of the area. 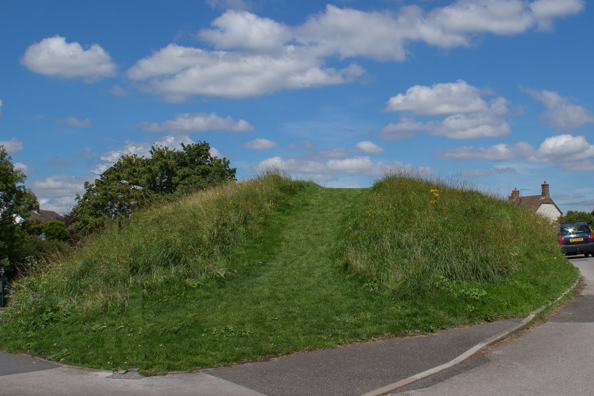 It was very pleasant wandering along the grassy path on top of the walls and occasionally coming down to the ground to read an information board. In places I came across some splendid displays of wild flowers and I paused several times to enjoy the views of the countryside beyond the walls that still define the limits of the town to the north and east. 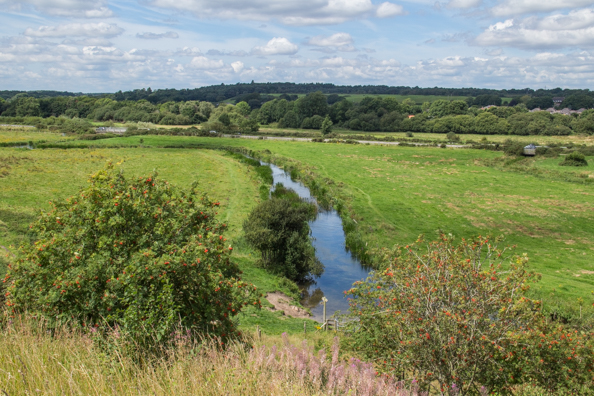 As I completed the north section of the walls I arrived at the Church of Saint Martin on the Walls. I was taking photographs of the exterior when I was approached and asked if I wanted to go inside. The woman who approached me was holding a huge key which she was about to use to lock the church up. I was very grateful that she had noticed me outside and even more so when she offered to show me around. This tiny church is the most complete example of a Saxon church in Dorset and at least one thousand years old. It is also home to a priceless effigy of T E Lawrence, more popularly known as Lawrence of Arabia. This effigy was sculpted by Eric Kennington the official war artist for both World Wars. In this capacity he accompanied T E Lawrence to Arabia. The effigy was originally intended for St Paul’s Cathedral but Lawrence was a controversial character and the cathedral would not take it. It was also offered to Westminster Abbey and Salisbury Cathedral with the same result. So it came to St Martin’s – a fitting place for it as Lawrence had ties with Dorset. After the First World War he retired to the county and lived in a tiny cottage at Clouds Hill between Dorchester and Wareham. This effigy attracts many visitors to the church but it is not the only notable feature. In places the walls are covered with fragmented frescoes and my guide pointed out the signature of a Saxon builder carved into the plaster. During the Great Fire of Wareham those who had lost their homes took refuge in the church after which time it was abandoned. Finally, after two hundred years the importance of the shuttered, ivy-clad building was recognised. It was restored and re-dedicated in 1936. Today this little church is once again part of the community and holding regular services including weddings. 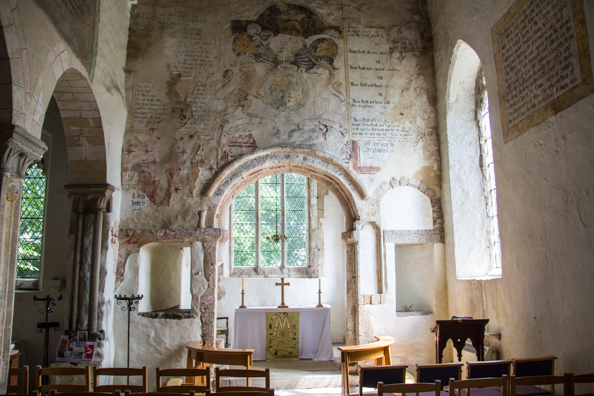 When I completed the Walls Walk I was making my way back into the centre of town when I passed the attractive Duke of Wellington pub. A quick perusal of the menu and the discovery that they served one of my favourite dishes, deep fried whitebait and I was soon settled inside enjoying some lunch. There is an interesting theory regard the pub sign. It shows the Duke of Wellington coming back to Wareham for Christmas after the Battle of Waterloo in 1815. He is shown polishing his boots prior to removing his sock to hang up for Santa. Of course he was.

Next door to the pub is the old Town Hall and Corn Exchange which houses the Wareham Town Museum. This museum evolved from the Wareham Pictorial Museum a private collection that was housed in the home of its owner, a former mayor of Wareham. When this museum closed the Town Council acquired the collection when this museum closed. They established a museum that is currently housed in the Town Hall.   In the museum there is a section devoted to T E Lawrence. He was a young Military Intelligence officer with pre-war knowledge of Arabia and Arab culture. He fought with Arab guerrilla forces in the Middle East during the First World War. This earned him the nickname of Lawrence of Arabia. When Lawrence left the army he regularly visited Wareham from his home at Clouds Hill. 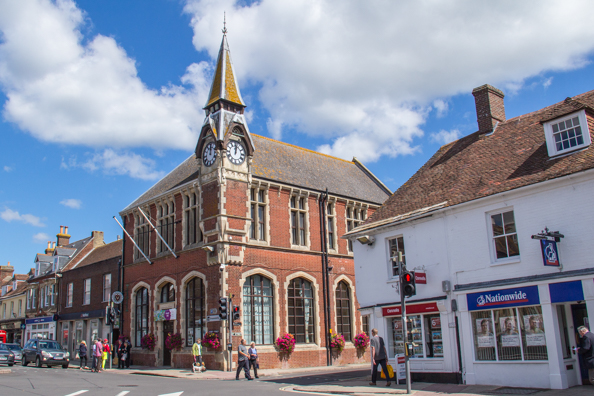 I also learnt more about the Great Fire of 1762 while browsing the exhibits in the museum. The seat of this disastrous fire is thought to be the old Bulls Head Inn that is now Lloyds Bank in South Street. Someone tossed some hot ashes onto a rubbish tip behind. It was not long before the old medieval thatched buildings went up in flames and most of the town burnt down. When the town was rebuilt they were built with tiled roofs on wide streets that would act as fire breaks. Once the town had been re-built in the style of the period, Georgian, it entered a period of prosperity as its local clay was used by Josiah Wedgwood to produce his famous pottery. During this period the Wareham to Swanage branch line was built for the transporting the clay. The station was built out of town to avoid sparks from the steam trains igniting the thatched roofs of houses that had survived the Great Fire. 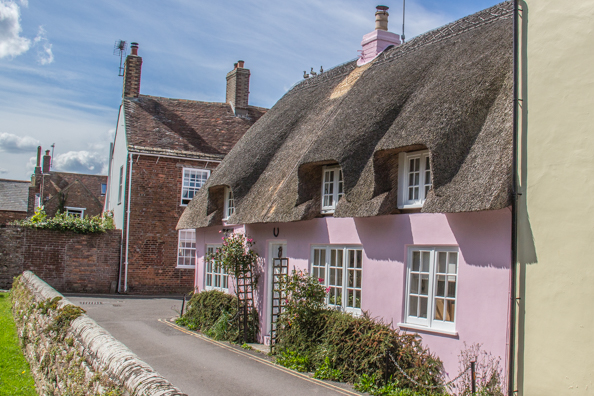 Finally, I embarked on the Town Walk although I had already seen several of the buildings highlighted on this route there were some I had not seen. Following the closure of the original town cinema the Oddfellows Hall, a venue for social events built in 1889, was converted to become the Rex Cinema in 1920. Its plush red interior still welcomes film goers every day. I also discovered the original almshouses. The Almshouse Charity – Streche’s Almshouses of John Streche was founded in 1418 to care for six ancient men and five women of Wareham. The original premises, built in 1741 on East Street, survived the fire. This building with its bell tower and dedication plaque is now in private ownership. The Town Walk ends at the Church of Saint Mary as the annual flower festival was taking place the day I visited the church was full of interesting flower arrangements and people admiring them. Nevertheless, I was able to appreciate both the flowers and the interior of the church, a Saxon minster of eighth century origin with later additions. 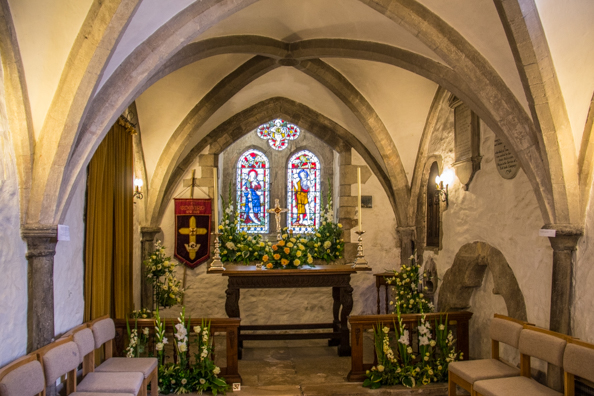 In the summer of 2017 the Swanage Railway completed the relaying of the track between Wareham and Swanage and started running a restricted service using diesel trains only. It is planned to introduce steam trains in the near future. It is a very pleasant, peaceful journey through the countryside with glorious views of Corfe Castle on the way – and a great finale to my day in Wareham. 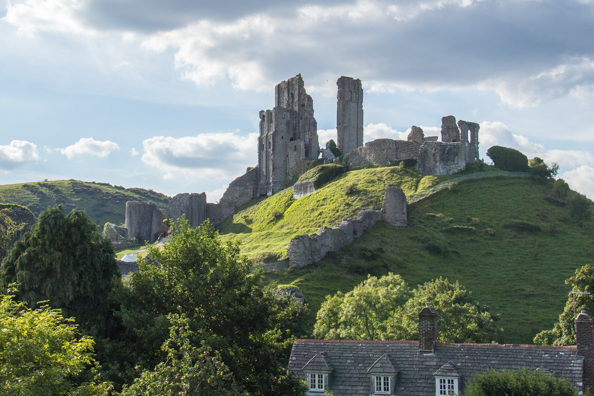