A Warm Welcome Awaits in the Dorset Town of Wimborne

The welcoming town centre of Wimborne is a large open space filled with the chairs and tables of cafés and restaurants that surround it. When I arrived it was summer and the sun was shining, brightening the blooms that decorated the pavement. It looked more continental than English even though I was in a small traditional Dorset town. 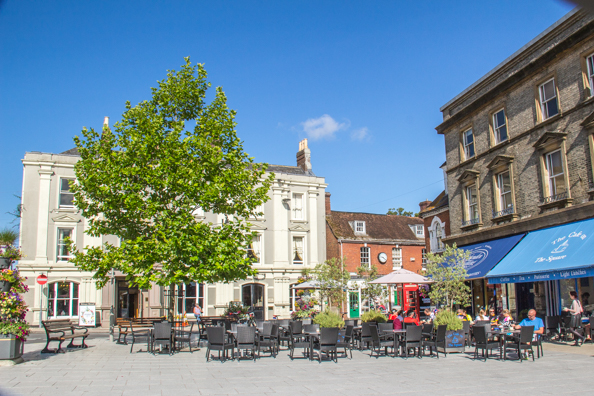 Very close to the town centre is Wimborne Minster. Thanks to the large, grassed area in front of it I was able to get a good view of this splendid building. As I did a circuit of the outside I noticed a small figure beside one of the windows of the West Tower above me. This painted statue called Quarter Jack is a famous feature of the Minster. These small statues, once a common feature, were installed to automatically strike the quarter hour. Here he strikes a pair of small bells. When he was installed in 1612 he was dressed as a monk but during the Napoleonic Wars his clothes were changed to those of a grenadier. 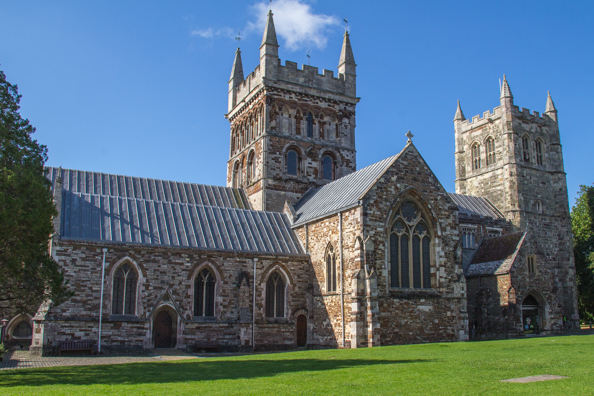 Behind the church I discovered God’s Acre This is part of an initiative to make churchyards wild life sanctuaries by planting wild flowers to encourage nature to flourish and bring churchyards alive. Wimborne Minster has won awards for its efforts in this direction having created a tranquil corner of the churchyard where visitors can sit to enjoy the flowers. 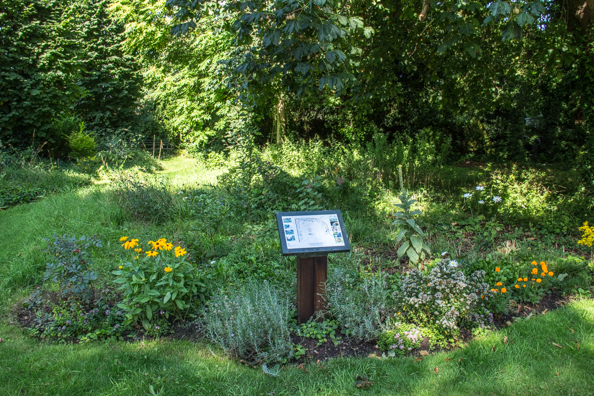 Once I had done a circuit of the church I went inside to have a look at its interior. I was given a warm welcome when I entered the church and a leaflet about the building. I read through this leaflet to identify any unusual items. An astrological clock graces an interior wall of the minster’s west tower. It was probably built by Peter Lightfoot, a Glastonbury monk. The casing around the clock was built during the Elizabethan era but the face and dial are much older. Documentary evidence relating to repairs carried out on the clock go back to 1409. Originally placed in the central tower the clock was moved to its present position in 1593. Its original mechanism was first replaced in 1695 and then again in 1792. The cherubim and gilded angels were once decorations on the original organ case but were added to the case of the clock when the church was renovated during Victorian times. In 1979 the clock was restored as closely as possible to its original design. 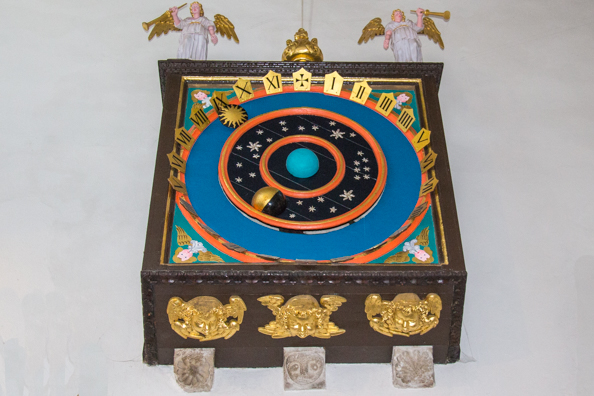 The Chained Library is at the top of a narrow spiral staircase. When this library was founded in 1686 it was one of the first public libraries in the country. When Roger Gillingham, a local inhabitant, donated some books to the library in 1695 he insisted that the books should be chained up. He also qualified ‘open to the public’ as freely open to people of the town, providing they were ‘shopkeepers or the better class of person’. Books in this library include early books on gardening, medicine, law, etiquette, building, and Brian Walton’s Polyglott Bible of 1657 (in nine languages). Anthony Ettricke’s tomb is actually built into the wall of the Minster. This eminent local barrister had a disagreement with the church and vowed never to be buried within the Minister. When he later had a change of heart he managed to find a way of getting around this vow. He got permission to be buried in the wall. He was convinced he would die in 1693 but lived for another ten years. Visitors can see where the original digits on the inscription have been corrected. The Minster is also home to the very striking royal blue ceiling in the central tower. This tower, built during the twelfth century, is the oldest remaining part of the church. 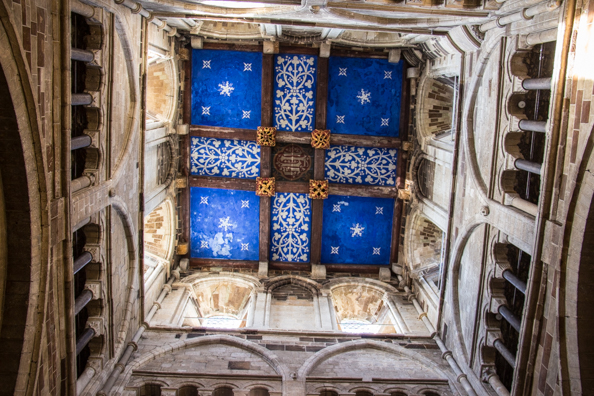 Soon after I left the church I was caught in a cloudburst and attracted by a sign that offered coffee and cakes at very reasonable prices I took shelter in the Salvation Army Hall. I felt as though I had stepped back in time. The simple hall was filled with tables covered with flowery tablecloths. My coffee was served in a plain white china cup and my homemade coffee and walnut cake was placed on a small white china plate. A pianist was playing songs from the Second World War. It seemed as though I had stepped into another era. When the music stopped there was a round of applause and shouts of ‘more’. He complied – it was a memorable occasion. When the rain stopped everyone dispersed to go about their business. I walked the short distance to the Priest’s House Museum. 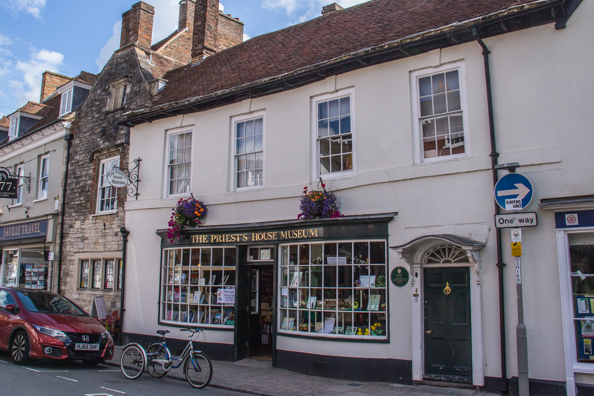 As we were experiencing April showers in August I went outside to explore the gardens first. It was the day of the annual summer fête and the gardens were full of stalls selling books and bric-à-brac. I retreated to the far end where a hearty gentleman invited me to ‘splat the rat.’ I assured him, very politely, that I would be back later. Strains of guitar plucking permeated the atmosphere as I wandered through a secluded area of the gardens before entering the house. 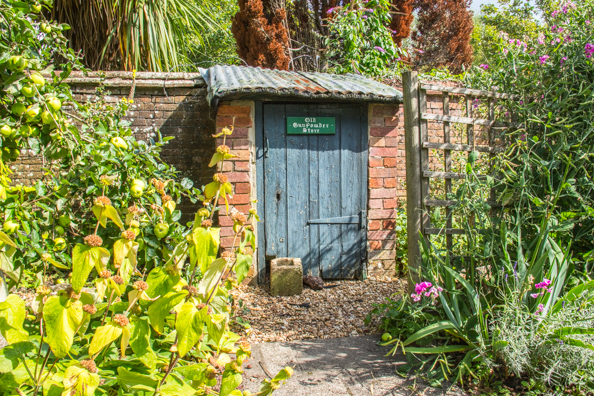 The museum is housed in a building whose origins date back to the sixteenth century. It has been used for a variety of purposes including three shops on the ground floor. Despite its name there is no evidence to suggest any link with the Minster. The first museum in this house was established by the last occupant of the property, Hilda Coles. She housed her collections in the three ground floor rooms and ran a museum with a team of volunteers. When she died in 1987 the house and garden were left in a trust to continue as a museum. In 2011 the Hilda Coles Open Learning Centre a timber-framed building along one side of the garden was built to increase the capacity of the museum. This new centre houses the collections of the museum and runs educational projects and activity programmes. Inside the house itself there are ten galleries to explore all with different collections relating the history of East Dorset. The period rooms include a seventeenth century hall, a working Victorian kitchen, a village schoolroom and a costume gallery. 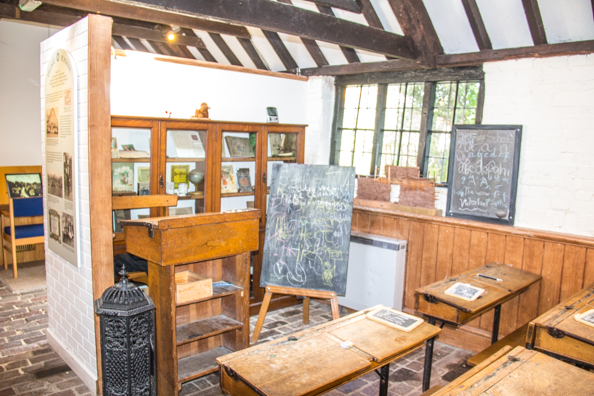 Next I visited the Model Town which definitely exceeded all my expectations. Visitors are given a quiz to complete and the air was ringing with shouts of “Woolworth’s is over here” and “I’ve found the house with a bath.” It soon became a community project as we all joined in the hunt. 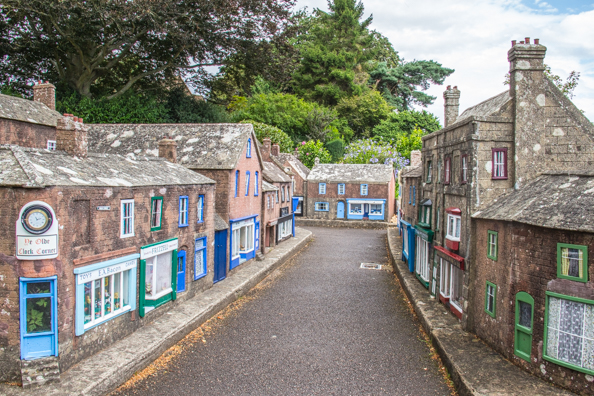 After exploring the model town and interrogating the lady on the door regarding the meaning of a bog garden I discovered some additional attractions – a collection of dolls house exhibition and a model railway featuring Thomas the Tank Engine and the Fat Controller. 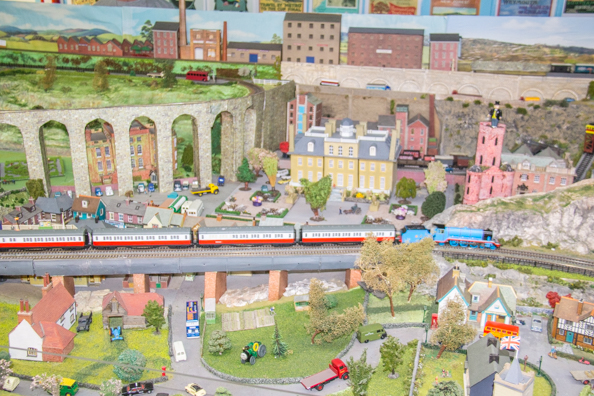 I had heard that Wimborne Market was open that day and as it is the biggest market in Southern England I decided to take a look. The huge site is out of the main centre on the site of the old railway station . The Saturday morning market, mainly car boot stalls, was closing down when I arrived but the plant stalls and Antiques Halls were still open so there was plenty to browse. 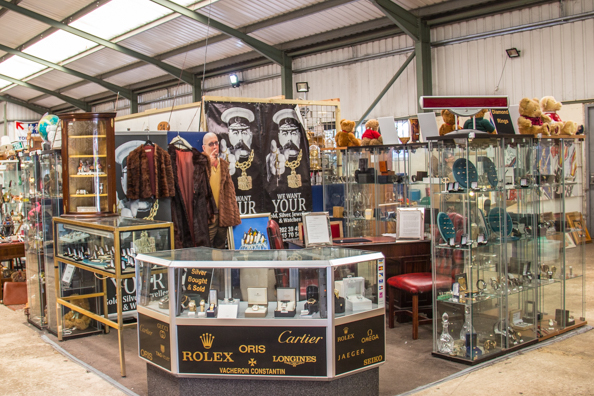 When I got back into the town I joined the Riverside Walk and strolled along by the waters of the River Allen that flows through the centre of town. 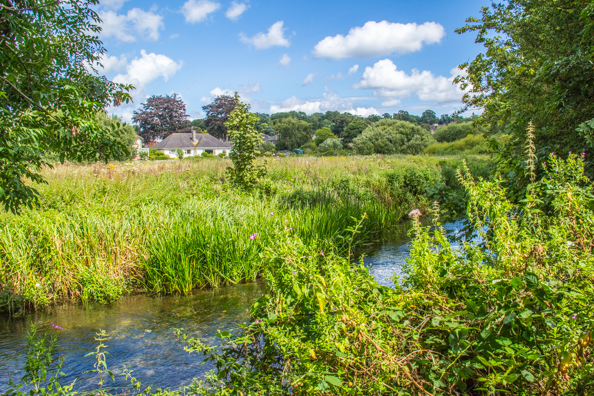 The path emerged from the trees close to the Walford Mill Crafts Centre. Since it was opened the centre has gained a reputation for excellence in modern British craft and design. The craft centre is housed in a lovingly restored old watermill. I was entranced by a short video showing otters in the stream below the building. 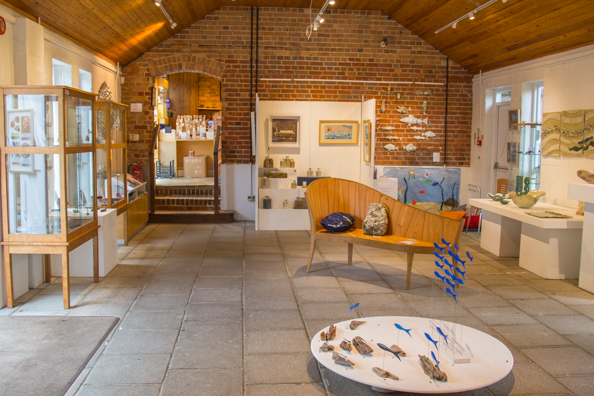 The garden was decorated with a collection of metallic bugs and fish. As I was admiring these and wondering if they were for sale of decoration the rain started splattering down again. It was a good excuse to take refuge in the Mill Stream Bistro for my second helping of coffee and homemade cake that day. Definitely a weakness of mine. 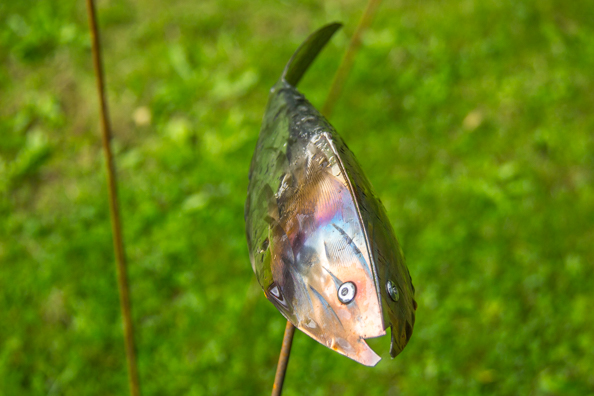 I had been made to feel very welcome everywhere I went in Wimborne which truly enhanced my experience of this attractive and interesting town.