On arrival in the Dorset town of Christchurch I was intrigued by a sign directing me to the Ducking Stool. I set off down a narrow lane beside Ye Olde George Inn, the oldest pub in the town. Originally called the George and Dragon this old coach house was built during the fifteenth century. In the early eighteenth century the old timber framed building was refaced with brick. Princess Victoria who later became Queen Victoria rested her horses here when she visited the Priory. 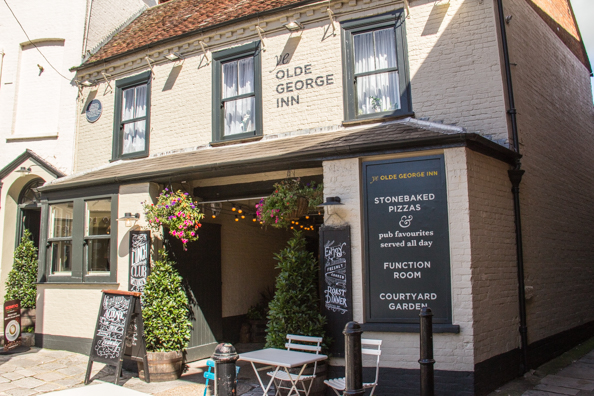 The Ducking Stool is not original although its replica is close to its original site. A general misconception of the ducking stool relates to the identification of witches but it is unlikely it was ever used for this purpose in Britain. It was used to punish and publicly ridicule scolds. They were women who were found guilty of verbal abuse, brawling and general anti-social behaviour. The miscreant was tied to a chair which was attached to a beam and positioned over water. She would then be raised and lowered into the water as many times as decreed by her ‘sentence’. The first recorded use of the ducking stool in Christchurch was in 1350 and the last in 1809. The replica was placed by the Mill Stream in 1986 to celebrate the centenary of Queen Victoria granting the charter that gave Christchurch borough status. The Mill Stream would have been much wider and deeper when the original chair was in place but the stream has silted up since then. 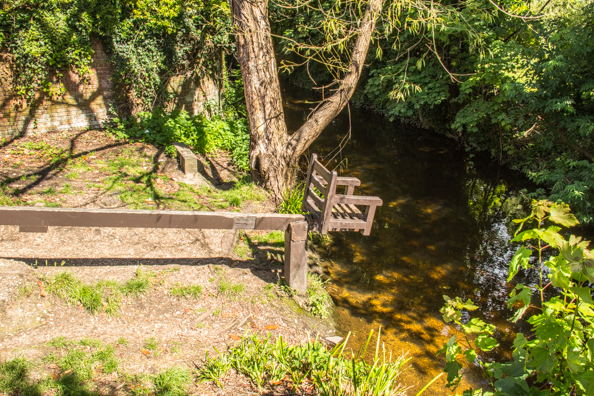 A board walk beside the Mill Stream emerges on Church Street where two bridges cross the Mill Stream and then the River Avon that runs parallel to it. I was immediately drawn to some ruins on the far side of the road and crossed over to investigate. Christchurch was originally a Saxon settlement within its own city walls. Then, it was known as Twynham (the place between rivers) and was part of a series of strategic defences established by King Alfred during the eleventh century. It is likely that the original castle was built then. Christchurch Castle is known to have existed since 1107. The Priory was founded by Edward the Confessor in 1043. Around 1095 Ranulf Flambard began building the church that still exists to this day. It was due to the importance of the Priory Church that the name of the town was changed to Christchurch. By the end of the twelfth century a prosperous community had developed around the priory, the castle and the port. Only the ruins of two of the castle buildings remain. The Norman House, also known as the Constable’s House, was once an elegant stone hall inside the castle walls. 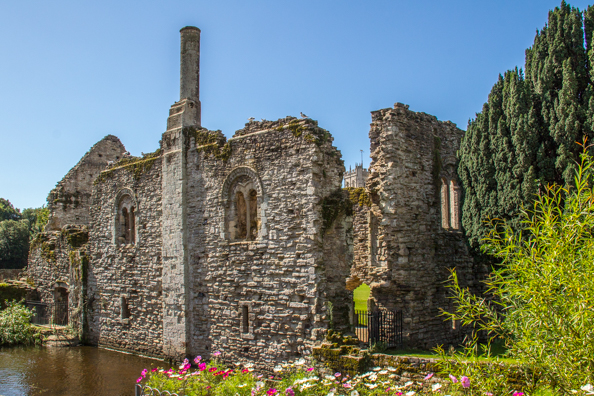 Beyond the Norman House is a mound topped by the ruins of the Great Tower. Only two walls remain of this building that was a place of refuge for its citizens when the town was under threat. To reach the ruins I had to walk around the bowling green. This bowling green and its recently restored Kings Pavilion belongs to the Kings Arms Hotel opposite. 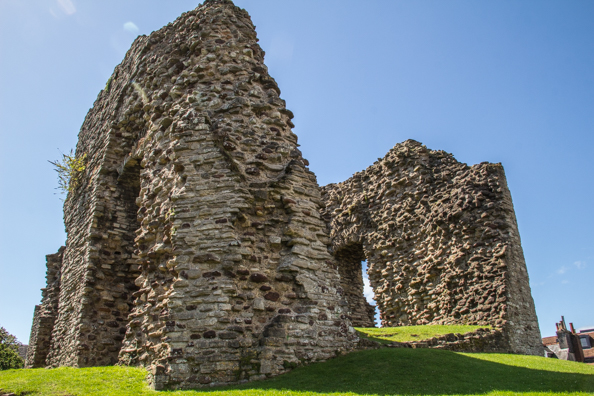 A shady path that runs alongside the Mill Stream is known as the Convent Walk and was opened in 1911 to commemorate the coronation of George V and Queen Mary. It was very peaceful strolling along catching occasional glimpses of the Priory towering above the trees that lined the far bank and hearing the splash of ducks gathering food in the water below. This path brought me to the Priory Gardens. I entered the first of three areas of this garden through a brick archway. Beyond the lily pond I found an unusual stone sculpture. It was the winner of a competition to produce a design to be sculpted on a block of Portland Stone to celebrate the nine hundredth anniversary of the Priory Church. Jonathon Sells of Corfe Castle submitted the winning design. It features a different scene relevant to the history of the Priory on each of its four sides. 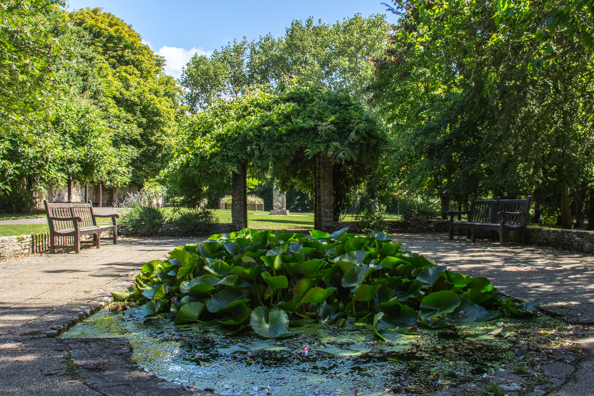 A narrow wooded path runs between two sections of the garden and emerges in an area known as Paradise. it is a walled cemetery with strict instructions posted outside regarding the objects that may be placed there. Close to Paradise is the Perkins’ Mausoleum. This structure has an interesting story. Mrs Perkins had a fear of being buried alive and instructed her husband to place her in a coffin that could be opened inside a building next to the local school. She selected this position so that she would be heard should be wake up and find she had been interred in error. Following the death of her husband her body was removed and placed with his in the family vault. The mausoleum was sold and its stone front was placed in its present position in the gardens. 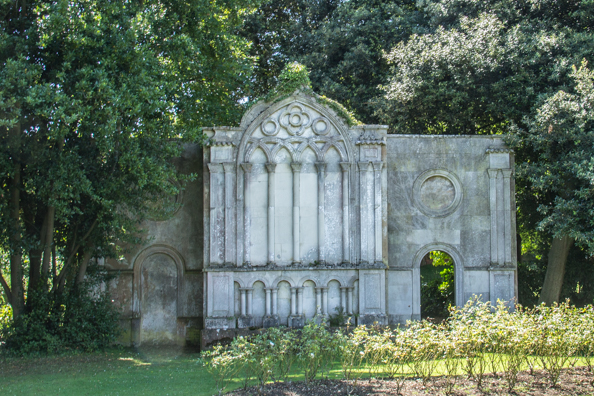 My wanderings finally brought me to the pride of Christchurch, its Priory Church. So large that it proved impossible to get the whole building in one frame despite various acrobatic moves amongst the gravestones. When I entered the church I was greeted by a jolly man in a royal blue robe who informed entrance was free but donations were welcome. He presented me with a leaflet about the church and I read through it before walking around the interior of the church. Had I not read this information I would not have discovered St Michael’s Loft Museum. Built in the fifteenth century above the Lady Chapel this loft and dedicated to St Michael its intended use is unknown. Legends suggest it may have been a storeroom for the smugglers who operated along the coast and brought goods inland through Christchurch Harbour. The loft is now a museum accessed (for a small fee) via a narrow spiral staircase. It is definitely worth a visit if only for the views from its window. 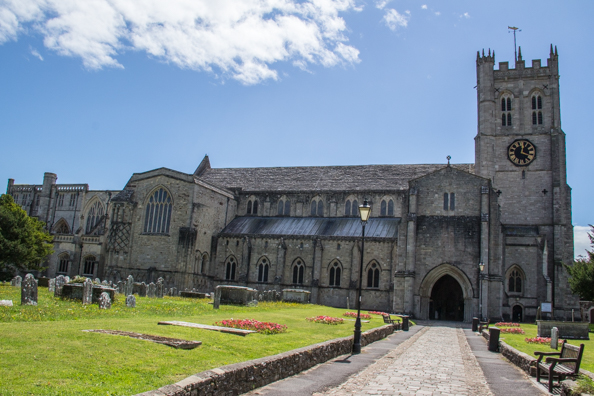 I left the Priory through the main iron gates after strolling down the High Street I discovered I had completed a full circle back to Castle Street. Earlier I had noticed the thatched building that houses the New Forest Perfumery and Tea Rooms that had attracted my attention earlier that day. I decided it would be the ideal place to stop for lunch. The Perfumery is a fourteenth century thatched cottage that has been owned by the Borough for nearly six hundred years. It is probably the oldest council house in England. Its medieval timber frame has been refaced twice and its pretty carved façade is Victorian. In the past it has been used as a butcher’s shop and the meat hooks are still visible above the window. During the Civil War the rent was reduced when the size of its garden was reduced due to the re-cutting of the castle moat behind the property. Today this garden is a small courtyard where people can eat outside. When I took my place I was immediately drawn to a special – fish and chips – and was soon tucking into a hearty meal. 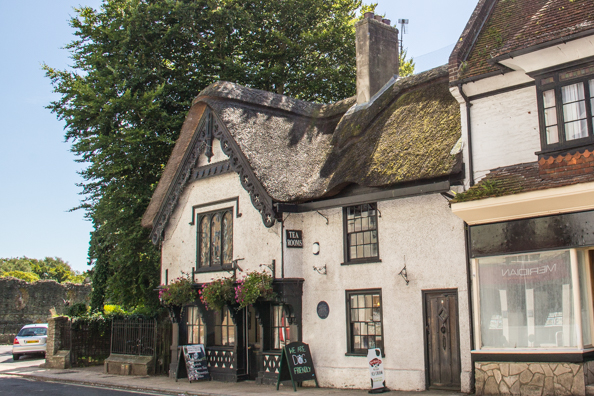 My next stop was the Red House Museum behind the Priory. I was surprised to read on a plaque outside that this lovely building was purpose-built in 1764 as a workhouse. In 1881 when a new workhouse was built the Red House became the vicarage. Now it houses a fascinating museum surrounded by a lovely garden. I started in the gardens and strolled around the three different areas enjoying the beautiful flowers and remembering with fondness childhood books evoked by the models ornamenting the shrubberies. In one of the outhouses I discovered the ‘Deluge’ a very rare fire engine. It was installed in Christchurch Barracks in 1795 for the use of the Royal Artillery. In 1865 the War Office sold it to the Borough of Christchurch and it was stored in the Engine Room of the Red House, then the Parish Workhouse. It is still there. Inside I strolled through various galleries portraying bygone times and the life the occupants of the workhouse had to endure. Men and women were separated and they had to work every day in the local factory making parts for watches. In theory Sunday was a free day when families could get together but in practice there were a lot of chores to be finished first. 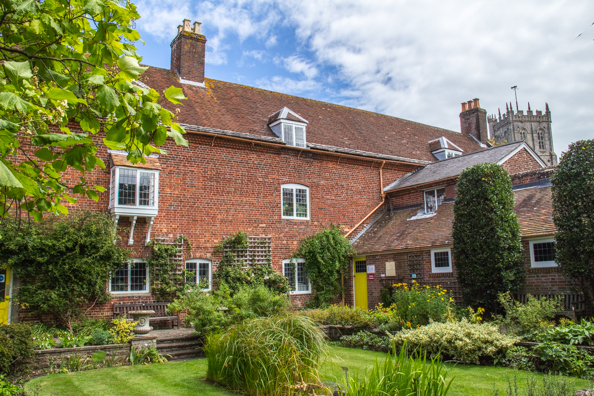 In the temporary exhibition room, I met some delightful characters called Gizmobots. They are created from scavenged waste and also custom made for individuals wanted to turn useless items into amusing ornaments. This exhibition features the work of Mark Haig, creator of Gizmobots. It was the first time I had come across this form of art and I could have happily given a home to one of them. They are sold with their own individual stories. 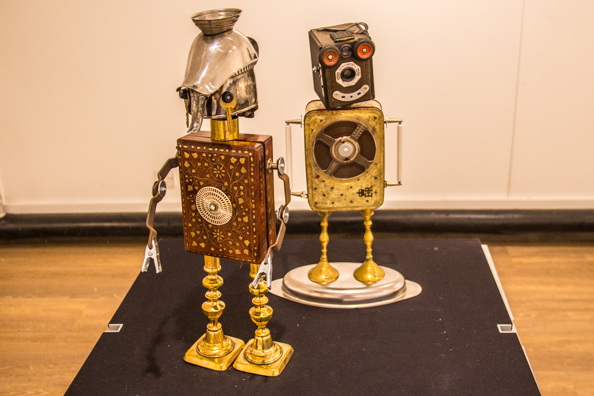 From the museum I followed the signs to Christchurch Quay and arrived at a large, grassed area known as the Quomps. It is a very popular picnic area. There was a lot going on, the bandstand had been turned into an art gallery, excited shouts could be heard from the Splash Park and everywhere swans and ducks were pleading hunger. It was busy on the water as well as boats and ferries made their way up and down the Rivers Stour and Avon which meet here. Haunting music floated across the grass from the fine dining Boathouse restaurant. 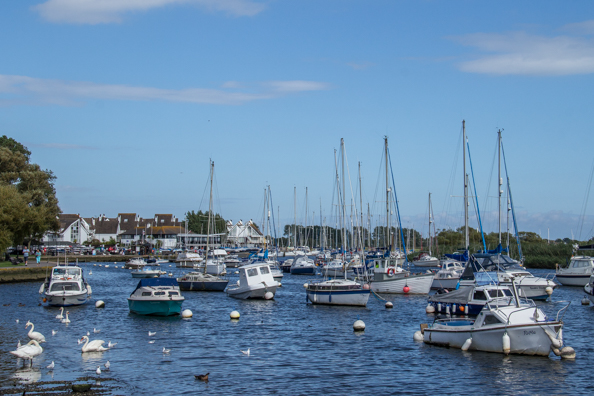 At one end of the Quomps is Place Mill on the Town Quay at the confluence of the Mill Stream and the River Stour. This Mill is mentioned in the Domesday Survey (1085 – 1086) and it was a working mill until 1908. Now it is used as an art gallery and artist workshop. Until recently it was still working but is currently awaiting repairs. It is still an interesting place to visit as the interior has not changed much since it was last operational. 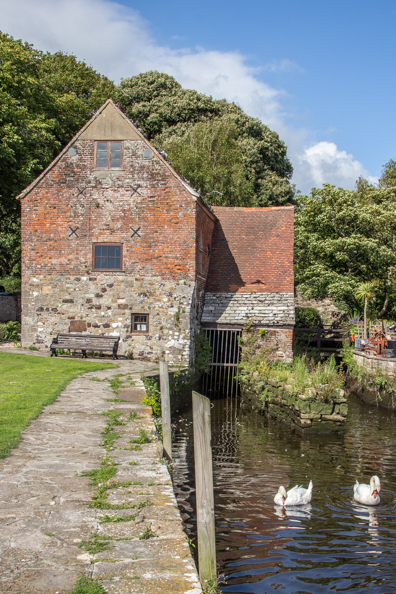 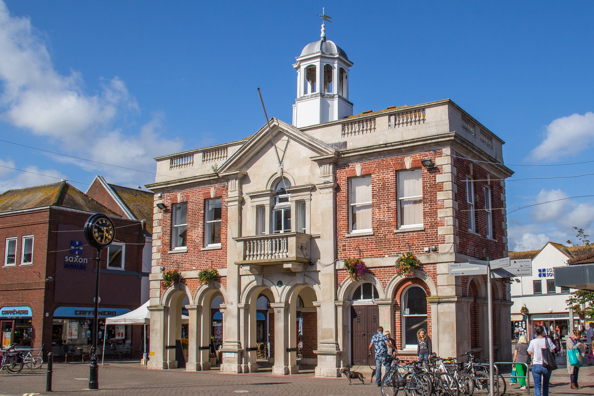 Finally, I laid a mystery to rest. I had seen the name Druitt several times on the map – Druitt Library, Druitt Hall and Druitt Gardens. All of them created by the Druitt family. While walking through the gardens I found an information board detailing the history of the most prominent members of this family. Herbert Druitt served five terms as mayor. The family bought the Red House in 1909 and in 1916 they opened the original museum based on their own collections. In 1947 Charlotte Druitt gave the museum to the town of Christchurch and it was put in trust and officially opened to the public in 1951. Druitt Hall was built as a facility for the inhabitants of the town and has recently been restored and will soon be in use again. 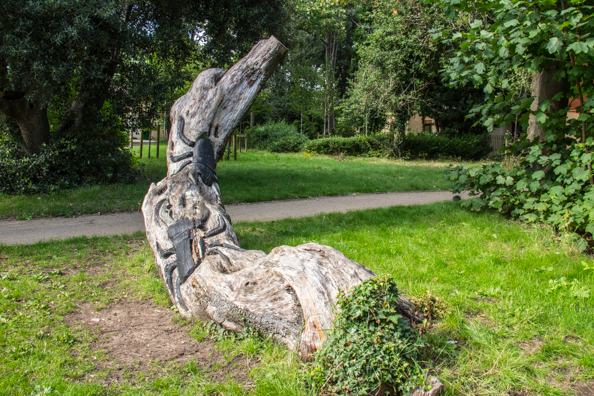 Christchurch is truly a diamond. A well-polished multi-faceted jewel in Dorset’s collection of real gems for the tourist.