Hardship to Holidaymakers on Pico Island in the Azores

In an extraordinary turn around the hardships of the islanders on Pico in the Azores during the last century have now been turned into tourist attractions. Visitors to the island arrive at Madalena, the main town and port. When I arrived it was blurry through the rain but I could see it was an attractive, modern town.

When the first settlers arrived on the island during the fifteenth century they had to hew a living out of the hard, dark lava that clothes a large area of the land. All the work had to be done by hand and system was developed to protect the figs and vines from the extreme weather conditions while taking advantage of the fertile volcanic soil. I could only imagine how hard it had been to produce the small rectangles of cultivated land surrounded by dry stone walls made from blocks of basalt. 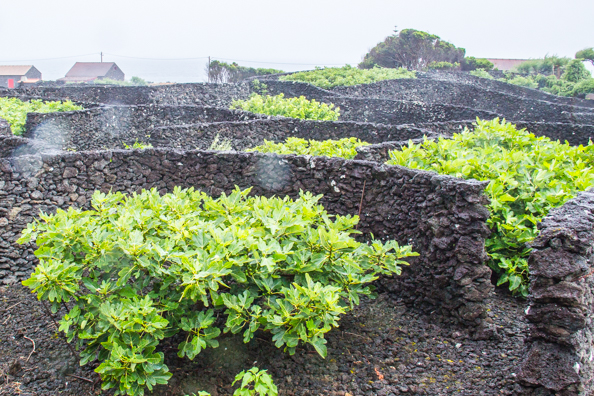 Large areas of the black lava have been left untouched by man leaving nature to create some dramatic landscapes. At Arcos do cachorro a large area of lava by the sea that has been eroded into caves, tunnels and other formations including one that looks remarkably like the head of a dog. Despite the persistent rain I decided to walk along the paths that have been created here to watch the sea pounding on the rocks. The white foam against the black rocks was a stark reminder of the power of nature. Behind me were some typical Pico houses. Here the houses are built with blocks of black basalt but some had been brightened up with white paint and red wooden doors and the characteristic exterior wooden steps were also painted red. 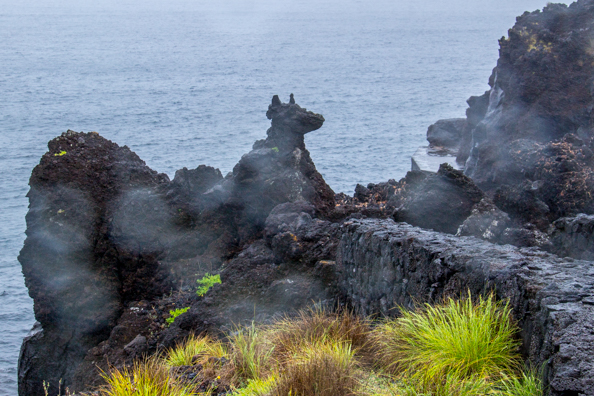 My next stop was the Whale Industry Museum in San Roque. This museum is housed in the building that was used to make products from the whales that were dragged up on the quay outside. Barbaric though the practice of whale hunting was it did demonstrate the courage of men needing to eke out a living. Whale watching stations were positioned around the coast which were manned all the time. When the signal was given that a whale had been spotted the boatmen would rush to the quay to launch the boats. These small rowing boats would surround the mammal – that was bigger than the boats – and the boatmen would stab the animal repeatedly until it died. It would then be towed back to the shore. Whale hunting was banned in 1984 although whaling did not stop on Pico until after 1987. Three more whales were hunted and caught in protest against the ban. But the industry was dying a natural death by then as the use of the oil from the blubber was declining. The wooden whaling boats are still being built on the island but now they are used for recreation and racing. 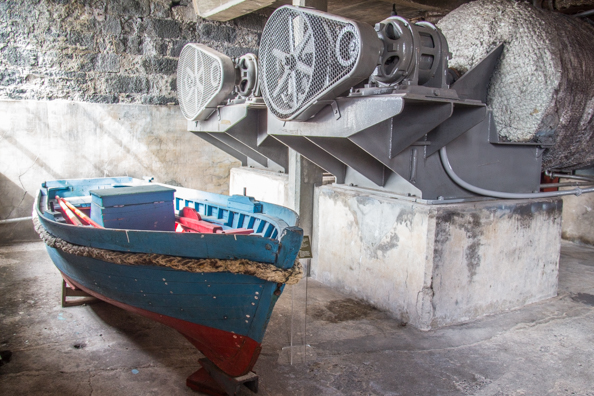 As the weather was clearing up by then I was able to have a walk around the Lagoa do Capitão. This lagoon is the largest on the island and a haven for bird watchers. I only saw a few ducks that came waddling over to beg some biscuits from my driver Paolo. The area around the lake is a protected area and features several endemic plants. 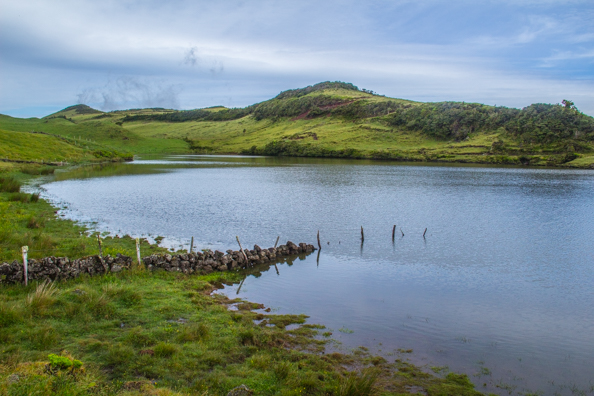 Rising up behind the lake is Montanha do Pico or Mount Pico, a volcano and the highest point of the island. It is the third largest volcano in the Atlantic. Eruptions of this volcano occurred in the mid-fifteenth century and the early eighteenth century when lava flowed out of its flanks rather than its summit and reached the coast. Although there were reports of fumarole appearing at the summit of the mountain in 2009 there has been no significant volcanic activity since those two eruptions.. 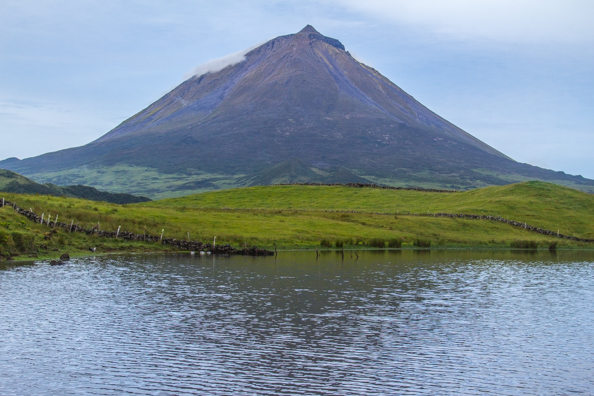 Museu dos Baleeiros is located at the old warehouses of the whaling boats. When I was invited to visit a second whaling museum I thought it would be a repetition of the first but it was completely different. It featured a room of Scrimshaw. This is the art of adorning ivory, bones or shells with carved, sketched or coloured designs. This art is typically associated with the whalers of Pico. There was no shortage of whale bones and teeth to practise this and probably no shortage of time, especially in the winter months. The collection in this museum is beautiful. 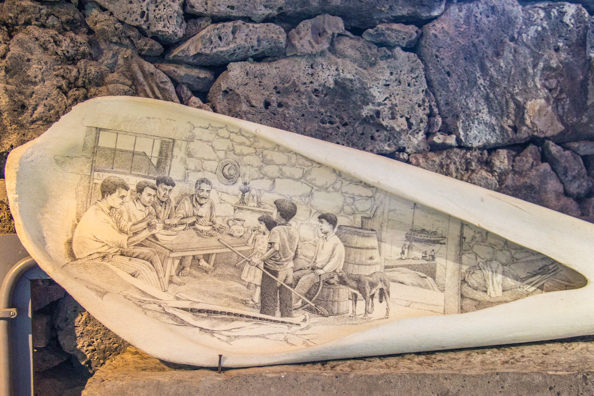 I had lunch at a local restaurant, Lavrador, tucked away in a corner of the village of Lajes do Pico. As always I enjoyed the fresh bread and cheese and pates followed by a tasty chicken and rice soup. The fish course with salad, vegetables and baked potatoes was delicious. I could not manage the meat course. I had notice the sun coming out so I went out to enjoy some fresh air and stunning views along the coastline of Pico. The only person keeping me company was a donkey grazing the lush grass that surrounded us. 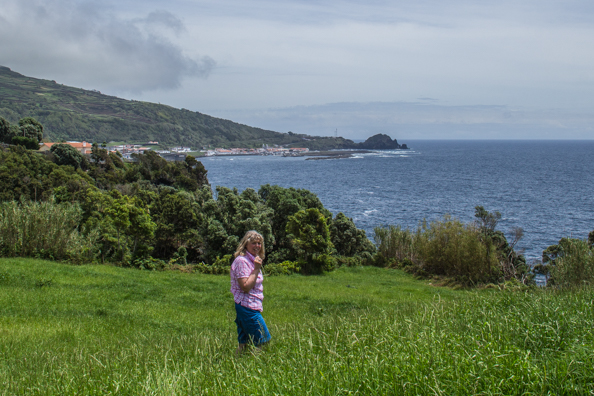 After lunch I visited the parochial Church of Madalena do Pico, the most important church on Pico. A church was first built on this site during the sixteenth century but was reconstructed during the nineteenth century. It was severely damaged during an earthquake in July 1998 but has been restored since then. 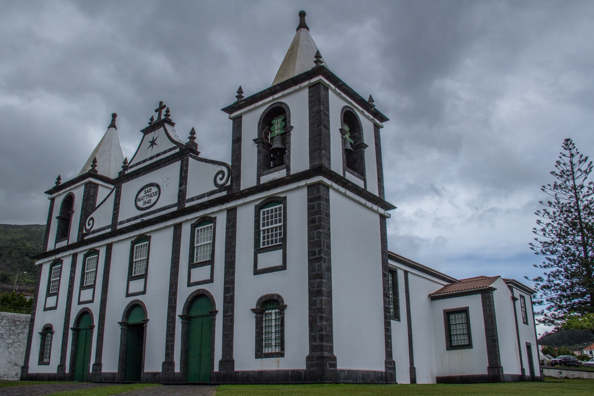 Just as I had come to expect the simple black and white exterior was a huge contrast to the beautiful, ornate interior. Exquisite tiles cover the columns that line the main aisle. 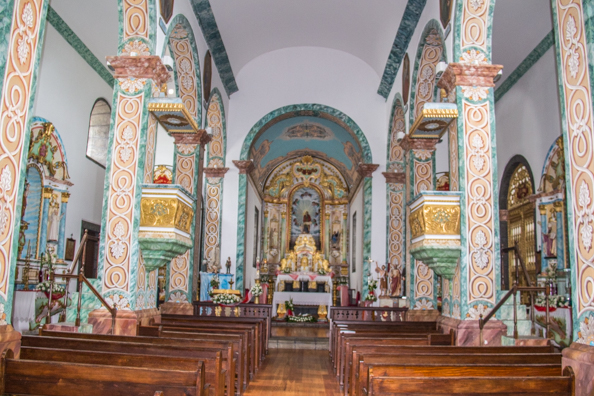 Finally, I explored the island’s most famous heritage. The unique landscape of viticulture on the island. Viticulture on Pico dates back to the fifteenth century. The unique nature of wine production on the island resulted in its classification as a UNESCO World Heritage Site in 2004. The cultivation of vines is similar to that of the figs I had seen earlier but on a much larger scale. A maze of dry stone walls was constructed around small plots of land to shelter the vines. These vines are free growing and therefore have to be elevated from the ground to protect the fruit from insects. It is so labour intensive the practise was dying out but recently it has seen a revival. I walked through a vineyard pausing to climb up to the top of a windmill (a Flemish tradition) from where I could appreciate the intricacy of the small plots or currais below me. These small plots make up one of the biggest stone networks constructed by man. For two centuries the wine produced here was exported to the royal courts of Europe. At the far end of the vineyard is the Museu do Vinho housed in an old Carmelite Convent. The museum relates the history of viticulture on the island and includes a cellar and a distillery. 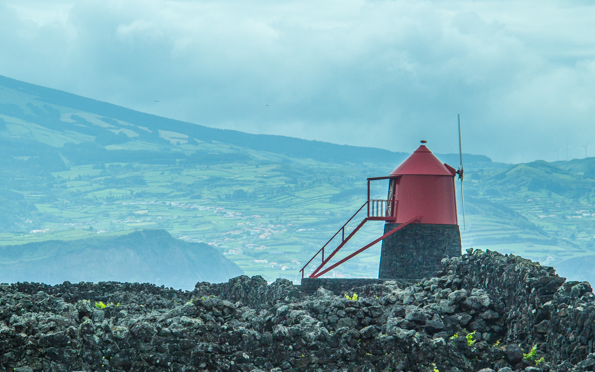 Behind the Museo do Vinho is the Shrine of Dragon Trees. The dragon tree or Dracaena draco grows on all the islands of the Azores. Generally it is the ornamental species growing in gardens. On Pico it is considered to be spontaneous or sub-spontaneous. From the fifteenth to the nineteenth century it was commercially valuable for its day. Its transparent blood red colour resulted in the name dragon’s blood or drago. It was used for paints, dyes, sealing waxes, varnishes and medicinal products. Its leaves were used by coopers to caulk containers and by vintners to tie grafts. Today it is used in the production of handicrafts. The dragon trees here are the largest of the species and some are a hundred years of age. 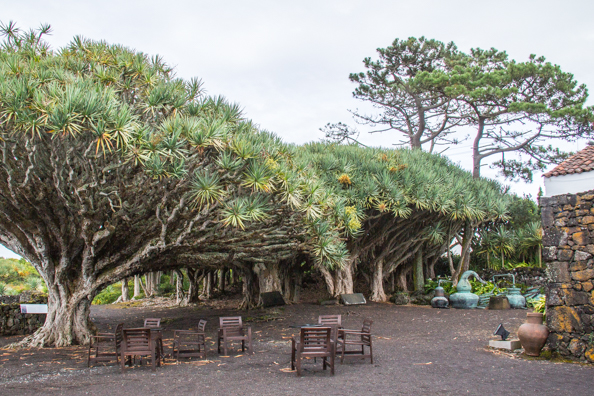