Horta, the Charming Capital of Faial Island in the Azores

Anyone sailing into Horta who does not feel a thrill must be either sleeping or throwing up. Colourful yachts bob within the walls of the busiest marina in the Azores. Pastel painted buildings creep up the hill towards majestic churches that dominate the skyline. And arms of imposing cliffs embrace the sea front on both sides of the town. To the left is the Espalamaca. Visitors can climb up this promontory for a view not only of the port and the marina of Faial Island below but also the islands of Pico, São Jorge and Graciosa. I was fortunate that my hotel, Faial Garden Hotel was above the marina with splendid views across the harbour below. From the hotel it was short walk down a path to the sea front of Horta, capital of the Island of Faial. 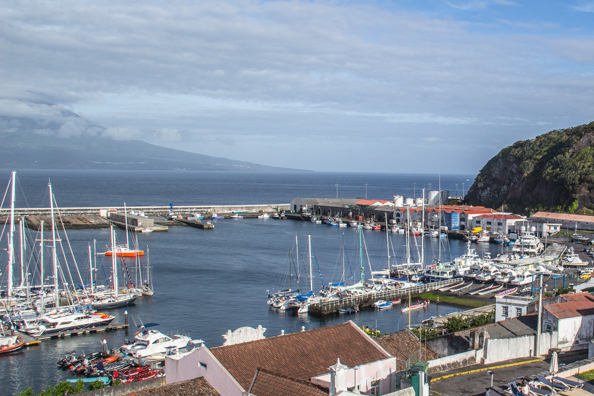 Peace and tranquillity may reign now but this marina is a hub of Azorean history and tradition. The Port of Horta was an important anchorage for galleons during the sixteenth, seventeenth and eighteenth centuries on their way between Europe and the Americas. Today it is a fashionable stop-over for transatlantic yachts between the Caribbean Islands and the Mediterranean. Why this practice started is unknown but according to superstition every boat that passes through should leave their mark, in the form of a painting, to guarantee a safe passage when they leave. Walking around the visitor will soon become aware that every slab of the surrounding walls, every curb stone of the pathway beneath them and even some of the rocks protruding from the lapping waves are covered with paintings. 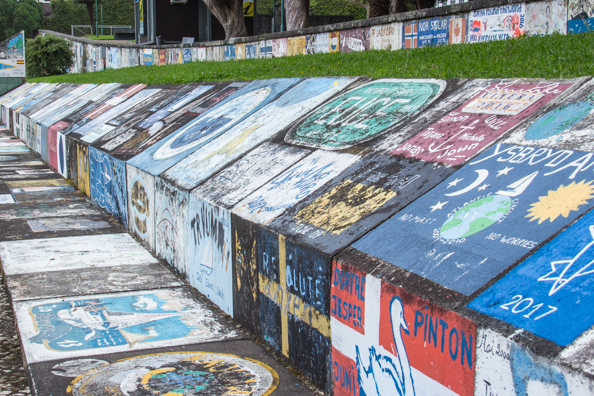 At the far end of the marina is the Fort of Santa Cruz, also known as the Castle of Sant Cruz. Built during the sixteenth century this fort played a significant role in the history of the Azores. When it became redundant there was speculation that it would be demolished but in 1947 it was classified as a national monument. It was re-opened as a hostel in 1969. A project that involved the destruction of much of the interior and only the exterior walls and the chapel remained intact. At the end of the twentieth century the building was extensively re-modelled and renovated in collaboration with Grupo Pestana Pousadas. This company specialises in creating luxury hotels in historic buildings. In 2004 the Pousada began operations as the Pousadas de Charme. its name was later changed to the Pousada de Forte de Horta but it is referred to locally as the Pousada de Santa Cruz. 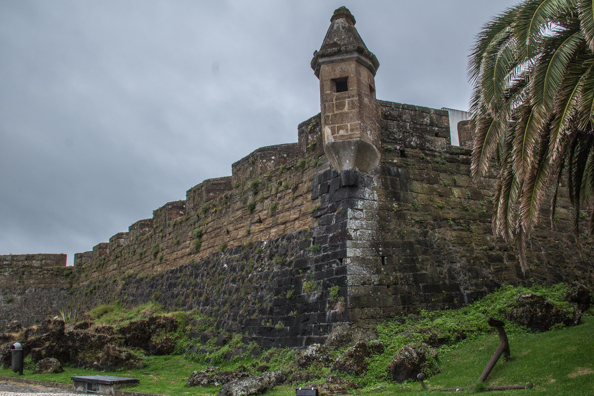 In the centre of town, dominating the square of Duque d’Avila, is the imposing parish church, Igreja Matriz São Salvador. It’s beautiful Baroque façade faces the sea. This church was built as part of a former Jesuit college constructed during the sixteenth century. The college buildings now house the Town Hall and the Museu da Horta. The church was severely damaged by an earthquake in 1926. Since then it has been extensively renovated. Its simple exterior hides a rich and elaborate interior. 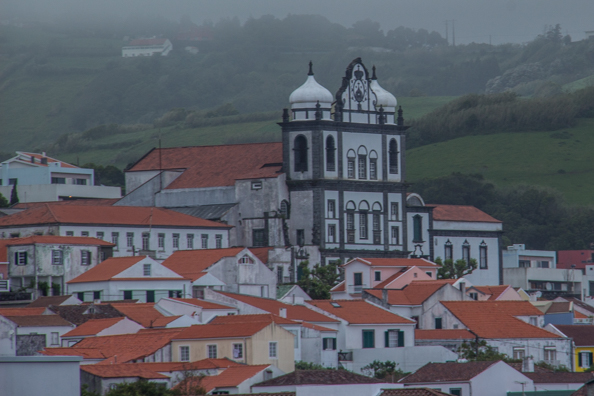 Opposite the Town Hall is the Império dos Nobres or the Chapel of Acknowledgement and Charity. This small chapel was built during a terrible time when the island was coping with a volcanic eruption in 1672. It was built to give thanks and to make a commitment to the organisation of an annual religious event. This includes a procession, a mass and the distribution of alms. Impérios are a common feature of the Azores as they are built to commemorate a natural disaster or other similar event. 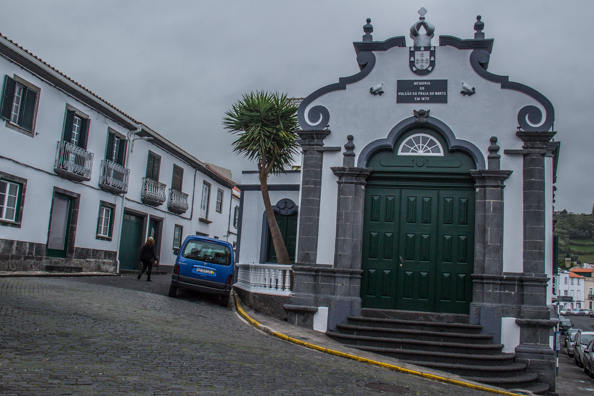 Standing proud above the centre of the town is the first Carmelite Convent to be built outside mainland Portugal. After its construction began during the seventeenth century it underwent many changes and renovations due to earthquake damage. After the Jesuits were expelled from the Azores leading to the extinction of this religious order in Portugal the convent was transferred to the Lay Carmelites. Soon after that it came into the possession of the State of Portugal and was used as a garrison and barracks. It remained in the possession of the Ministry of Defence until 2016 when it was declared it would become part of a program to restore culturally important buildings. Today it stands abandoned and eerily empty. 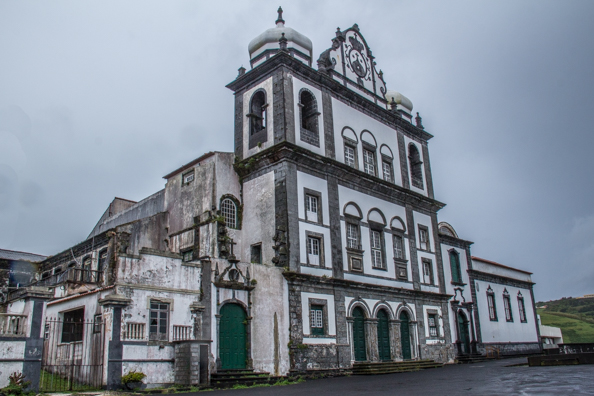 The buzz on the island was that whatever else I did I should eat at Pete’s Sport Cafe and, in particular, have a gin and tonic there. Why gin and tonic? It was due to the influence of the British workers employed by the telegraph cable companies during the nineteenth century. When this bar opened on the marina in 1918 it quickly became popular with the sailors. It has always been more than just a bar having operated as a base for Dutch tugboat crews, a post office, currency exchange and a scrimshaw museum. Its colourful past is reflected in its vibrant interior, strewn with flags and shipping memorabilia, throbbing with music and packed with people. It was during the Second World War that the café got its name which was the nickname of the son of the current owner. This nickname was bestowed on him by a naval officer. I had the foresight to book a table and once seated the first thing I did was order a gin and tonic. But I could not fathom what was special about it. I pride myself in being honest – I get a better gin and tonic at my local pub. Of course, I could have invested a lot more money and tried a ‘special’ but it looked just the same as the one I had just drunk only more of it. But I did enjoy the great ambience of the place and my first (and last) plate of grilled limpets. It is true that some grilled sea foods are all about the sauce. My dessert was a fancy concoction of banana bread, a local favourite. When I arrived on the island people were dancing in the streets and offering platters of banana cake to passers-by. I tried a slice and it was delicious. I was invited to go back and join the party which made me feel very welcome on the island. 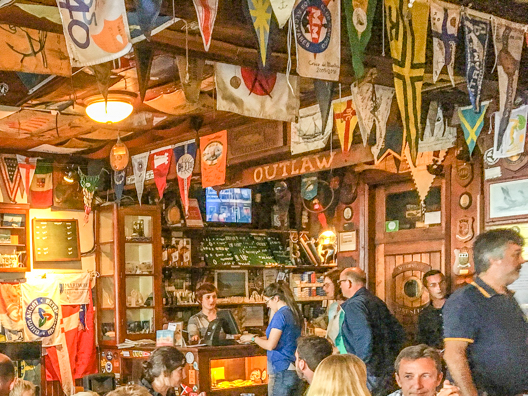 My last night in Horta I dined at the restaurant Canto da Doca. This restaurant offers an unusual meal as diners cook their own food. I was presented with a hot slab of lava and a plate of raw meat and fish. After some instructions that was essentially a direction not to put sauce or condiments on the hot rock I was left to my own devices. It was a very pleasant dining experience – experimenting with the different meats, fish and sauces in a relaxed atmosphere. 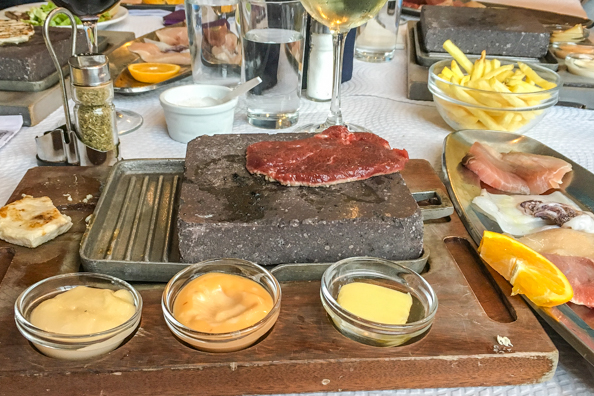 Walking to the restaurant that evening the skies, that had been leaden all day, suddenly cleared. I had a wonderful view of Pico Volcano on the island of the same name. It looked as though it was smoking again. Pico island, “São was to be my next port of call. 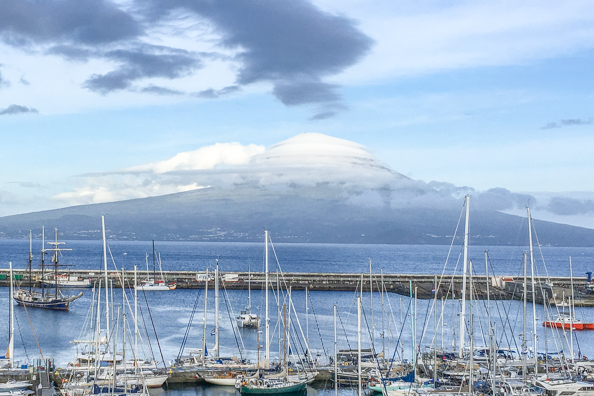