Whale Watching and Volcanology on Faial, an Island in the Azores

My tour of Faial Island in the Azores is the closest to nature I have been for a long time. But it started with a technical hitch as our flight to the island was delayed. We were due to go out on a whale watching trip and arrived more than an hour after we should have left the port. We raced there from the airport. Fortunately, the company was prepared to take us out to sea. We pulled on oilskins, clambered aboard and soon we were speeding across the water. 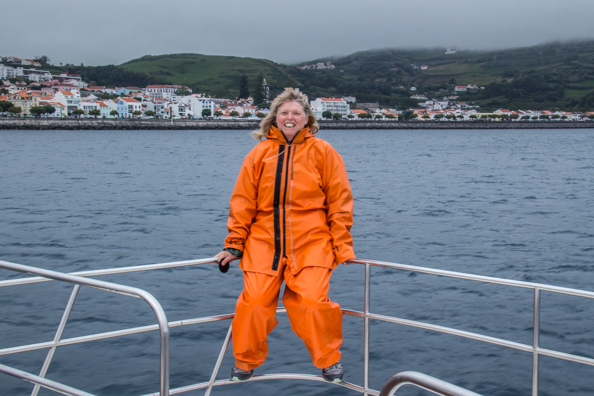 Once we had left the shelter of the harbour it became clear our crew, two very pleasant young men, knew exactly where we were going. We grabbed the rails at the front of the boat for stability as we bounced over the water. Occasionally I saw a flying fish but they dived back into the water so quickly they had vanished again before I could alert my companions. Suddenly the engines stopped and we bobbed gently on the ocean surrounding by an empty sea. As we peered into the water we could bubbles floating around us. Except they were not bubbles but the Portuguese Man of War. Most people refer to the Portuguese Man-of-War as a jellyfish but it is actually a siphonophore, an animal comprising a colony of organisms that work together. This creature has four separate polyps and it is named after the first one, a gas-filled bladder that sits above the water and looks like an old warship sailing on the sea. Under the water are its long tentacles, a separate organism. These tentacles are covered with venomous cysts which can kill small sea creatures and deliver an extremely painful but rarely fatal sting to humans.

After a few minutes the engine revved up again and we were off. The crew scanning the horizon We followed their eyes. Someone shrieked as a plume of spray was spotted. Whales ahead! We clustered together in the bow. Fortunately, we were a small group otherwise it could have been man overboard such was the enthusiasm for getting a good photo. We were all surprised when a whale surfaced not far from our boat and then another one appeared. It was only a brief appearance before they disappeared again. They would be below the surface for several minutes and it was guesswork regarding their position when they re-appeared. The whales were fin whales, the second largest mammal in the world. The blue whale is the largest. Plumes of spray alerted us to their position as soon as they came up again. Fin whales are also known as the razorback due to the shape of its back. They also have a very unusual feature as the lower right jaw is white while the left jaw is black. As the whales never came right out of the water we could not appreciate this feature. Nevertheless, it was breath-taking just watching them.

We were reluctant to move away from the whales but our crew indicated that we should move on. Everyone went below for a drink as we headed back towards land. I soon became aware that we had changed course and when I stood up to investigate I caught side of a dolphin leaping out of the water beside our boat. I grabbed my camera and made my way to the front of the boat. Looking down into the water I could see several dolphins swimming under out boat, racing with it. As soon as they got ahead they rose out of the water in a triumphant leap before diving under the surface and circling to the back of the boat again. A large pod of common dolphins had arrived to play. Playfulness is a characteristic of this dolphin. I watched entranced as they circled around us and we had plenty of time to admire the distinctive fins on their backs and their black and white colouring. 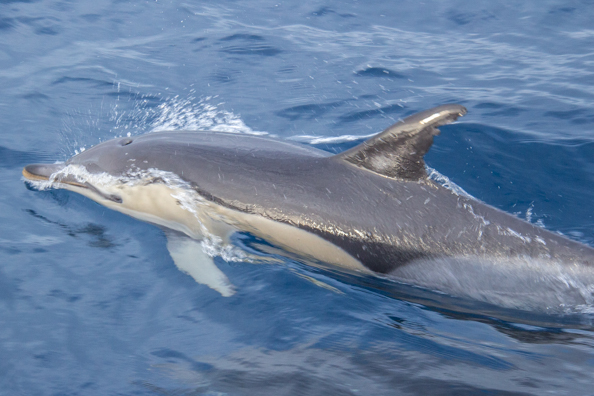 I had already seen evidence of volcanic activity in the Azores – crater lakes and fumaroles – but the landscape around Capelinos Volcano on Faial Island still bears the scars of the great eruption in 1957. This eruption occurred about one kilometre from the coast. Large amounts of lava and ash were thrown up forming a very small island that later became connected to Faial island by an isthmus. 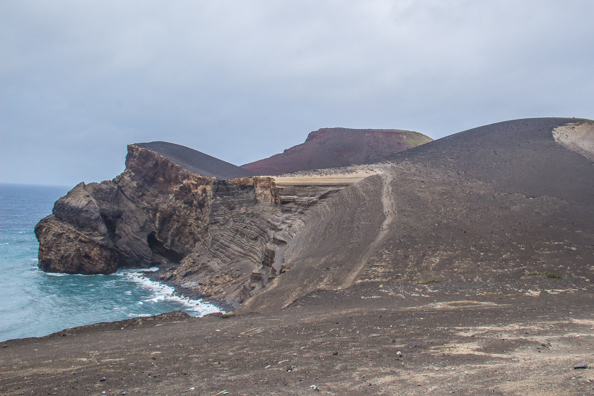 The islands of the Azores archipelago were all formed by volcanic activity but from a scientific point of view Capelinhos is unique. It is the only volcano in the world that has been photographed, filmed, observed, studied and interpreted since the start of its eruption which lasted thirteen months. This eruption had lasting consequences for the people who lived on the island as it caused constant earthquakes and expelled sand and ashes that buried farms and houses. This devastation destroyed the economy of the island and thousands of residents took advantage of the Azorean Refugee Act 1958 to move to the United States. Amidst all this destruction there was one unexpected survivor, the Capelinhos Lighthouse. 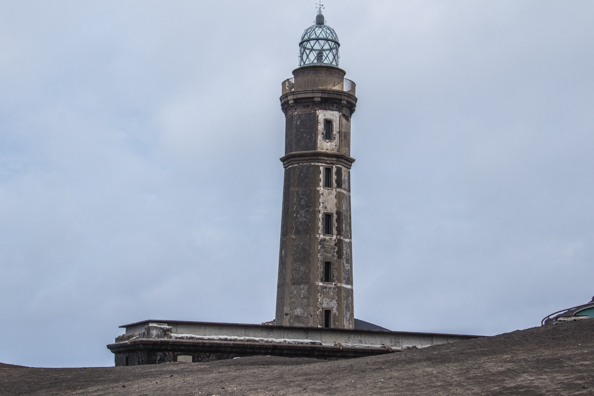 This lighthouse has become the centre of the Capelinhos Interpretation Centre which was built underneath it in order to preserve the volcanic landscape that surrounds it. On arrival visitors walk across the barren landscape to the lighthouse. A staircase leads down to the main reception area – an interesting space that has been constructed to resemble a volcano erupting. Visitors are invited to watch a 3D film that explains the volcanic nature of the islands. This does require the use of large square glasses that lighten the mood for some, including me. After the film visitors are free to explore the centre and absorb the fascinating story of this historic eruption. 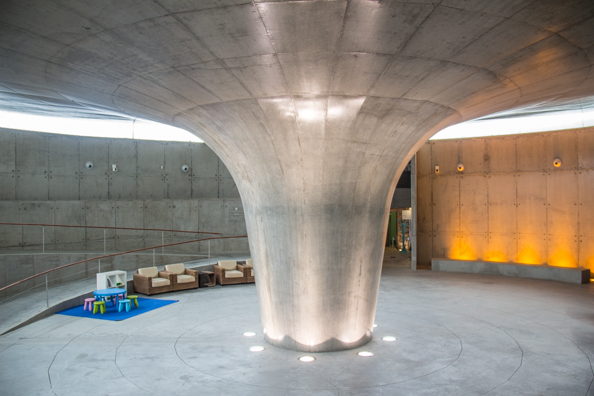 Not far from Capelhinos in the village of Capelo is the School of Handicrafts. The aim of this institution is to preserve and encourage the talent of local artisans. The building that houses this project was once part of a private estate. Walking around the shop that is part of the school I was amazed at the variety and beauty of the products on display. The materials used include straw, fish scales, corn husks, shells, basalt, whalebone and paper. But, specific to Faial is the crafting of fig tree pith. This handicraft is so famous that the Horta Museum has a room dedicated to works by its main master, Euclides Rosa. The art of turning fig-tree wood into intricate miniatures and fragile figures has been practised since the mid-nineteenth century and it is thought it was originally practised by the nuns in convent cloisters. My personal favourites were delicate flowers carved from the dried stems of hydrangeas. 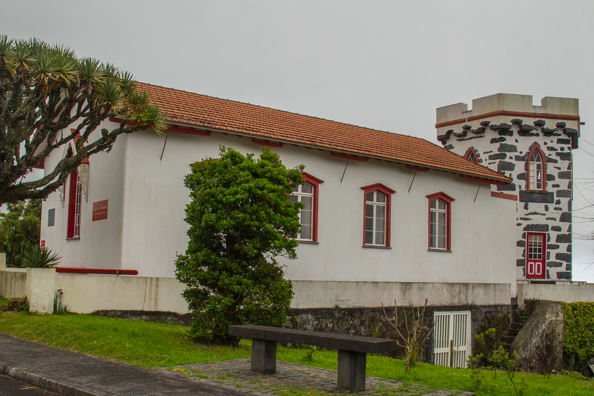 Dairy products are an important asset to the economy of the islands and, as a cheese lover, I enjoyed a visit to Queijaria O Morro, an artisanal cheese factory. The factory was established by farming brothers Rui and Nuno Caldeira and has become very successful. Its cheeses were featured in the global magazine the Wine Spectator and deservedly so. I was given the opportunity to taste eight varieties of this soft, tasty cheese. Cheese here is produced from the milk of Holstein Friesian cows because these cattle are agile on the slopes of the mountainous island and produce good quality milk. Perhaps the best-known of the Azorean cheeses is the cheese made on São Jorge island. This unpasteurized cheese takes many forms including a mature, extra strong cheese similar to a cheddar. This cheese is often served as a starter with fresh bread and had been included in my delicious lunch earlier in the day at Aldina 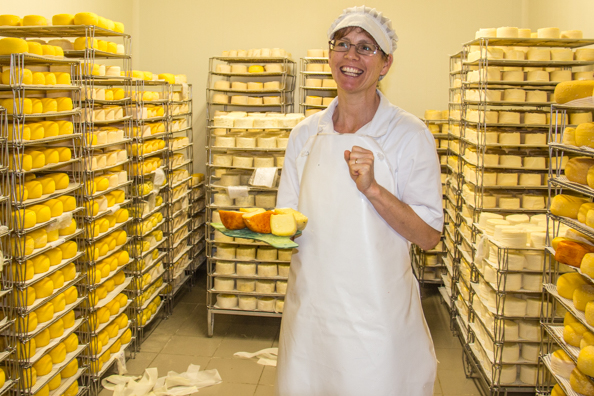