Ponta Delgada, a Portrait in Black and White with Splashes of Colour

Architecture is the most striking aspect of Ponta Delgada on the island of São Miguel in the Azores archipelago. Simple whitewashed buildings striped with black basalt stand out against a backdrop of green vegetation beyond the town. This architecture originated from Portugal of which the islands are an autonomous region. Each island has developed its own variations. São Miguel developed a window–door–window-style with simple decorations around these openings. White and black basalt was always used for important buildings and there are many in Ponta Delgada. 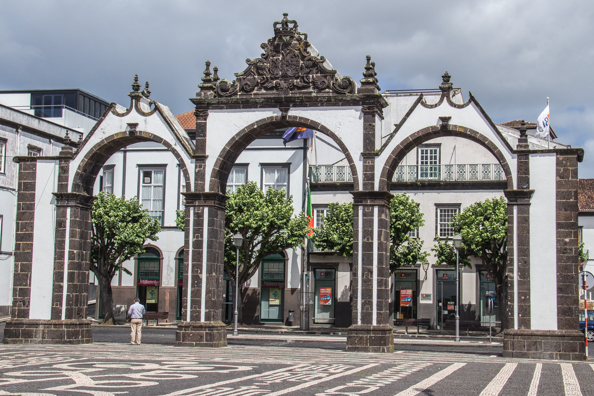 Originally a simple fishing village Ponta Delgada was destined to become the capital of São Miguel the main island in the Azores archipelago. When the islands were discovered and settled in the fifteenth century due to its strategic position Vila Franca do Campo quickly developed as the most important harbour and became the first capital of São Miguel. However, in 1522 Vila Franca suffered almost complete devastation during an earthquake and Ponta Delgada became the focus of government and religion. It was granted city status before becoming the new capital. Its sheltered harbour soon developed as the main port of the island. During the sixteenth, seventeenth and eighteenth centuries this port became an obligatory stop and supply station for shipping between Europe and Africa and the Americas. As trade flourished so the city grew and prospered. By the eighteenth century convents, churches and manor houses were widespread. Its historic centre still features some of these buildings. 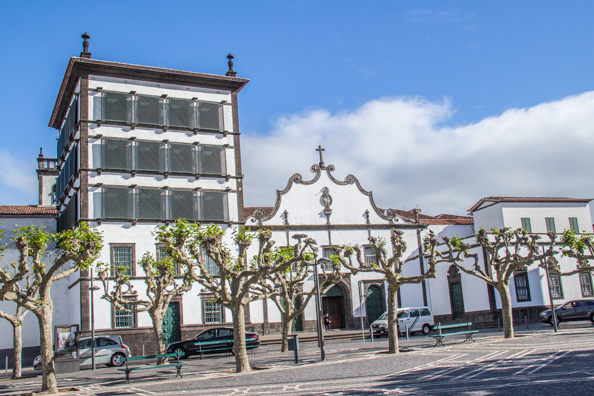 During the sixteenth the town decided it needed to protect the valuable vessels that docked in its harbour from pirates and privateers. After much discussion between the town and the government of Portugal it was decided a fort should be built on the tip of the island known as Tip Delgada. It is from this strip of land that Ponta Delgada derived its name. São Brás Fort also known as São Brás Castle is considered to be the most important example of military architecture of the sixteenth century and the most powerful fortification on the island. This fort served its purpose. Despite its battle scars and renovations it is still an impressive building. On the front wall is a monument to soldiers of the First World War. Today it serves two purposes as a military base for Portugal and home of the Military Museum of the Azores

I was eager to explore the town and after skirting the fort I crossed the main road that now separates the town from the sea. A common feature of the design of Azorean towns is the jumble of narrow streets the emerge in small squares. In Ponta Delgada these squares were opened up when the Avenida Infante Dom Henrique was built along the sea front. Stretching along the back of Praça 5 de Outubro I found the Convent and Chapel of Nossa Senhora da Esperança A large, square tower makes the convent very distinctive and it overshadows the chapel next to it. This chapel is famous as the centre of the cult of the image of Santo Cristo dos Milagres (‘Jesus Christ of the Miracles’). Members of this cult worship the statue in the chapel. The statue, adorned with jewels is kept behind an iron lattice. This statue was given to the nuns of the convent by Pope Paul II in 1530. It is one of the religious treasures now housed in the convent. When I stepped inside the silence enveloped me and my eyes were immediately drawn to the illuminated statue penetrating the gloom that surrounded me and several worshippers. After spending a few moments in respectful silence I stepped outside into the sunshine again. In front of me was a reminder of the diverse vegetation of the fertile, volcanic Azores – a huge New Zealand Christmas Tree that was just coming into bloom. Along the left side of the square is the Igreja São José is the jewel of the now extinct San Francisco Convent. When Vila Franca was destroyed in 1522 the Franciscan monks who had been living there moved to Ponta Delgada and where they founded a convent. The convent was built around 1525 but work on the church did not begin until 1709. 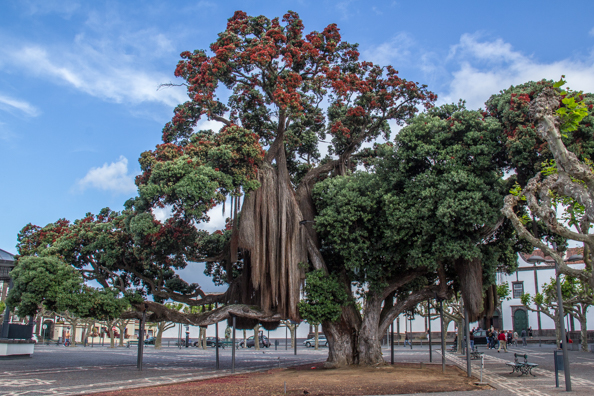 Moving on to the next square I found the three-arched Portas da Cidade, the city gates. This gate was built in 1783 and is adorned with the royal crown and the coat of arms of the city. Originally, the gates were constructed next to the old quay and formed the entrance to the old city. When the Avenida Infante Dom Henrique was built the gate was moved into Praça Gonçalo Velho Cabral. This square is named after the discoverer of the Azores, Gonçalo Velho Cabral, and features his statue. 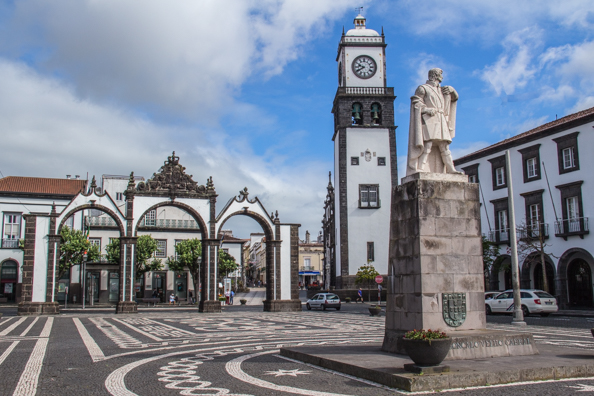 Behind the gate this square extends into Largo da Matriz the square that is dominated by the Igreja de São Sebastião the main parish square of Ponta Delgada. Founded during the sixteenth century and built in the Late Gothic style it has a magnificent Manueline door at its main entrance. A unique feature of this church is its high tower which is the only one in the city that has a clock. Impressed by the exterior I decided to investigate its interior and discovered that it is just as attractive as its exterior. 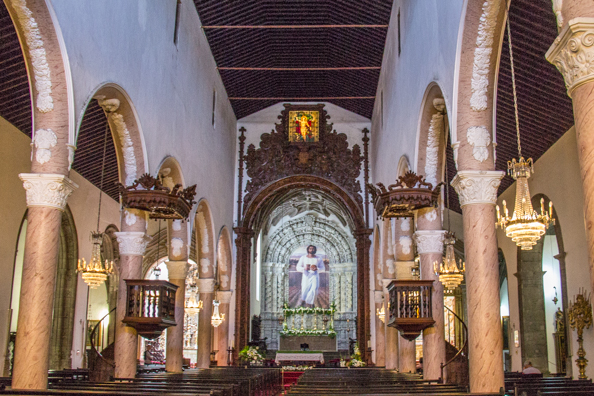 Back on the avenue I continued to the Largo da República, boasting a statue of Saint Michael. The island derives its name from this saint. In the same square is the Paço do Concelho or town hall, an attractive Baroque construction from the 18th century, featuring a belfry dating from 1724 adorned with a 16th-century bell. I paused briefly as I was on a mission to reach the far end of the harbour where I had spied yet another church. I had already seen some similar town halls around the island. My objective proved to be the Igreja de São Pedro another parish church. Although the construction of this church began in the fifteenth century it was over two hundred years before it was completed. The church itself was closed but the elevated churchyard has a good view over the harbour. 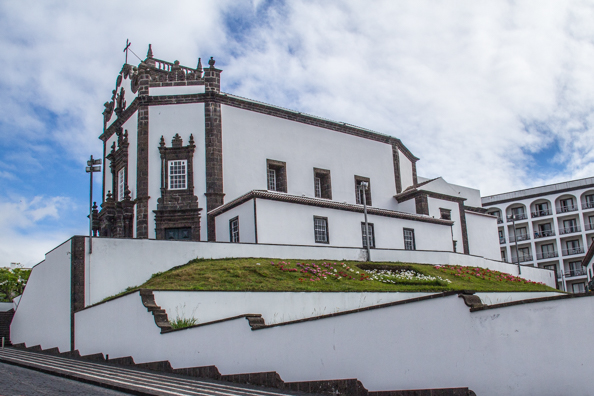 Attracted by a little chapel at the top of the hill I set off to take a closer look. I am fascinated by churches and different religions. When I got there I was disappointed not to find an entrance to this chapel, Chapel of Sant’Ana. Founded in 1624 by a knight of Christ, Antonio de Frias and his wife the chapel is a well-preserved example of seventeenth century Azorean religious architecture. To the left of the chapel I could see some beautiful grounds but they were private and all I could do was peak through the gate of what I later learned was the official residence of the President of the Azores, Palacio de Santana, built in the mid-nineteenth century. 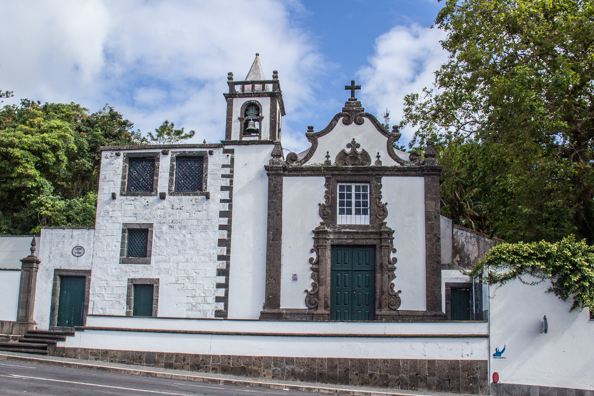 I moved on to the other side of the palace and found the entrance to the Jardim António Borges. António Borges Medeiros was an avid amateur botanist in the nineteenth century and established this interesting garden featuring a plethora of trees and shrubs. The Chapel of Saint Ana was marked on the plan of the gardens. I made my way there and was delighted to find the entrance. Inside the chapel I found a narrow flight of stone steps that led into the belfry. It was so small that when I was taking photos I had to be careful not to fall back down the stairs. Peeking through the small windows I had a good view of my surroundings. 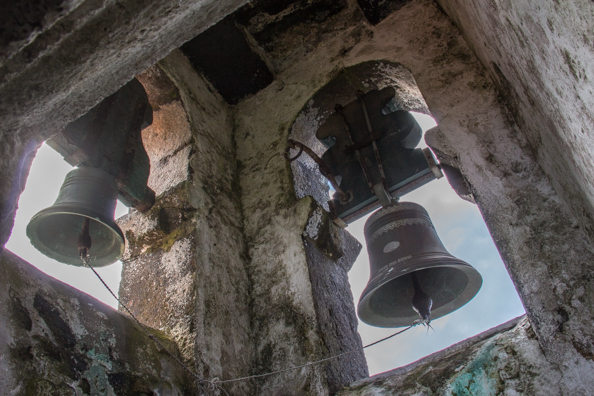 It was time for a splash of colour and I spent some time exploring the gardens and enjoying the peace and quiet. 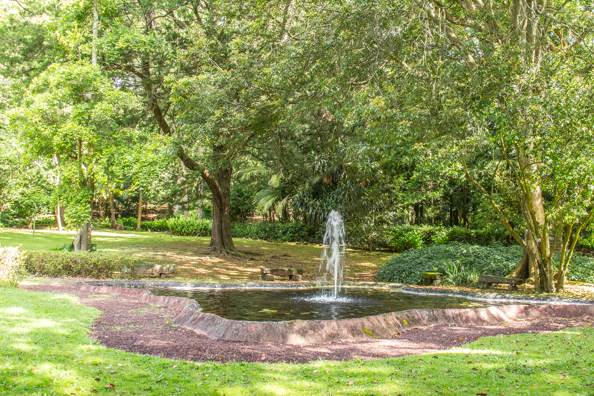 On my way back to my hotel I found another interesting building, Igreja do Colégio dos Jesuítas or the Church of the College of the Company of Jesus (Jesuits). The whitewashed and dark grey basalt resembles a noble town house rather than a religious institution. When the Jesuits were expelled from Portugal during the eighteenth century the building was plundered. Although the Jesuit College retained the building through paternal inheritance in 1939 it was donated to the City Council of Ponta Delgada. Since then the building has become part of the Museu Açoreano (Azorean Museum) created by Dr Carlos Machado in 1876. This museum occupies three buildings and features permanent and temporary collections. 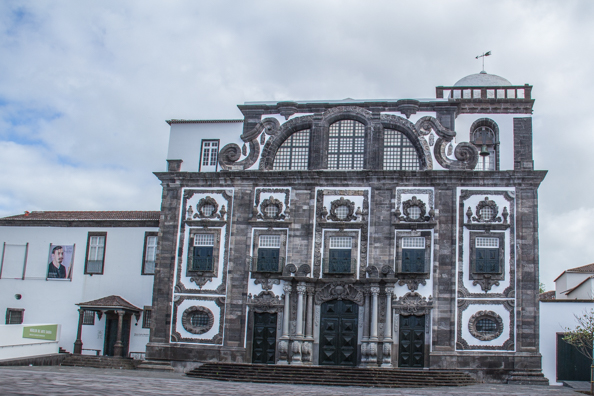 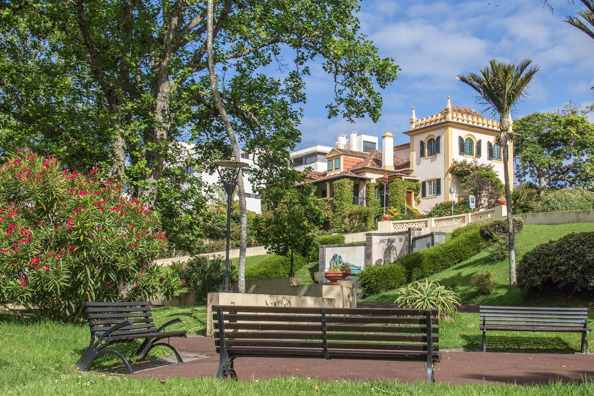