Hiding Away in Sherwood Forest - A Uniquely English Experience

I am always on the look-out for new experiences – I have zip-wired in Guatemala, ridden an ostrich in South Africa and been white-water rafting through a gorge in Bali. But none of these experiences have given me such lasting pleasure as a recent stay at the Sherwood Hideaway. The self-catering aspect did not appeal, at first. The thought of staying in a luxury lodge with a hot tub did appeal. Once I decided to match the two and treat myself to some luxury food I was looking forward to this new adventure. 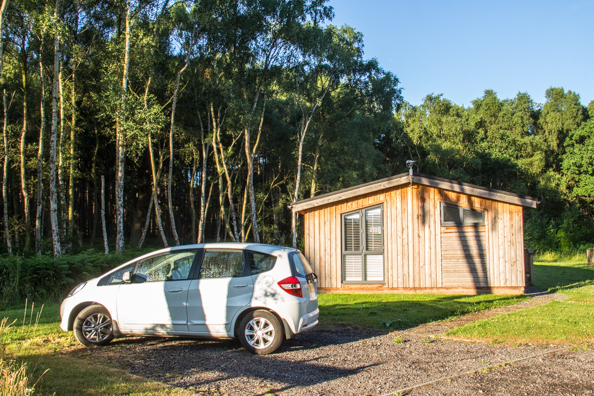 I was delighted with my lodge. The rooms were well appointed and the furnishings were very attractive. All I could see from my sitting room were the trees of Sherwood Forest close by. Once I had unpacked and stocked my fridge I changed into my swimsuit, poured myself a glass of wine and climbed into the hot tub. Warm water was soon swirling around me from the hydro-massage. It was early evening and the air had cooled. Some clouds had rolled in bringing a smattering of rain with them. I enjoyed the contrast of the cold rain and the hot water. After a shower I pottered around the well-equipped kitchen cooking my supper. Well, to be honest, heating up a ready prepared meal – but it was top of the range. As I ate my meal the only sound I could hear was the occasional chirping of a friendly Robin perched on the fence around my patio. Bliss. 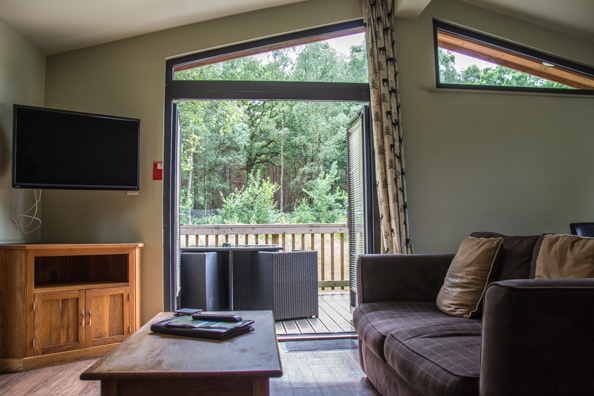 I woke very early the next morning and decided to go for a walk. I had intended to do the Thoresby Walk but a herd of Longhorn Angus cattle were blocking my way. Cattle are kept in the forest to graze the undergrowth and keep it under control. Unsure whether they were eyeing me with curiosity or hostility I decided to re-trace my steps and do the Woodland Walk instead. As I walked along the deserted paths I spotted a pheasant, a fox, a grey squirrel and a rabbit. Wild flowers that I had not seen for years, such as fox gloves, speckled the undergrowth. Sunshine filtered through the trees and the air was fresh and clean. It was a lovely start to my day. 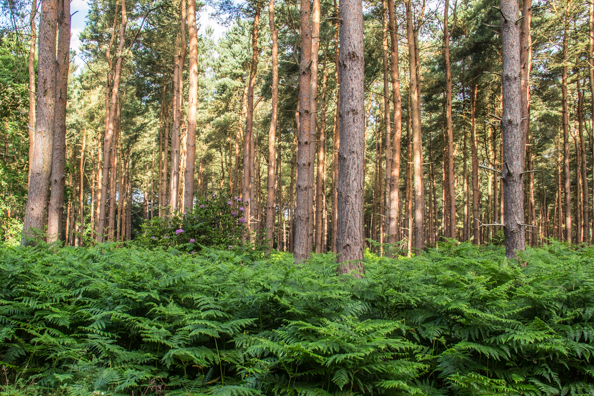 Later that morning I joined the group taking part in the Photography Masterclass featuring birds of prey. The birds of prey had already arrived and were sitting on their individual perches outside reception. One could appreciate the different characters immediately as none of them were hooded and could appreciate what was happening around them. Bella, the peregrine falcon, was squawking for attention. Matilda, the European eagle owl, was quietly taking in her surroundings. Willow, the gyr saker falcon hybrid, elegant and serene, was one of the most beautiful birds I had even seen. Nyima the Steppe Eagle, was spoiling for a fight with Annabelle the Harris Hawk. Fortunately, she could not reach her. 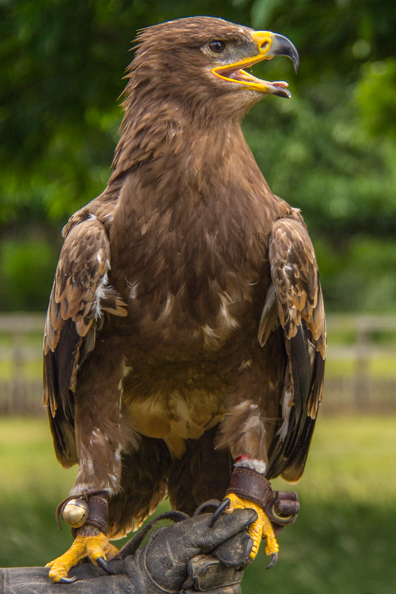 We were introduced to Simon from Go-Active Falconry who owns the birds. Simon talked to us about the sport of falconry. Birds of prey have been used by people to hunt since biblical times. The advent of the gun meant fewer and fewer birds were used for this purpose. However, the practice has continued and today the ‘flying’ of birds of prey is becoming increasingly popular and a past time and an attraction. Although, in the United Arab Emirates, where the falcon is the national bird, racing falcons is a popular pursuit of the wealthy. The best falcon for this purpose is the Gyr Saker falcon a hybrid of the largest falcon in the world, the gyrfalcon, and the fastest, the saker falcon. It is bred specifically to race. Willow had been used for breeding for eleven years before Simon acquired her. He had to teach her to fly again but sometimes she is not too keen. Today she was determined not to fly for us and spent a long time telling Simon she was not in the mood. 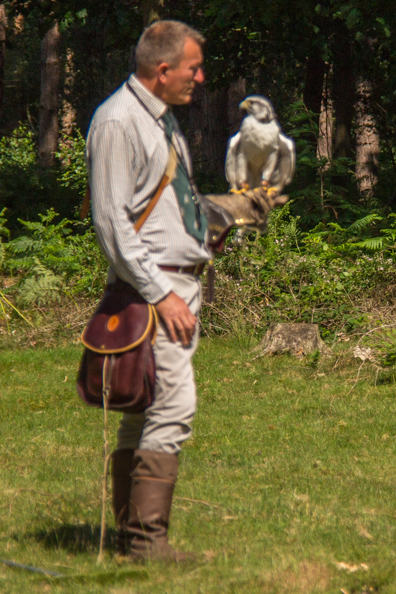 We walked into Sherwood Forest with Simon and Annabelle. The latter flew up into the trees and posed for us to take photographs. We were accompanied by Heather Burns, a renowned wildlife photographer. Heather gave us a general introduction to taking photographs of birds in flight. During the morning session she gave hints and instruction on an individual basis. As there were only eight of us it was easy to get her attention and ask for help. Although I knew what I should be doing it was hard to get good shots of Annabelle in flight as she was so quick. I got a lot of blurry bird against a green background but it was fun trying. And the joy when I finally achieved one good shot was immense. 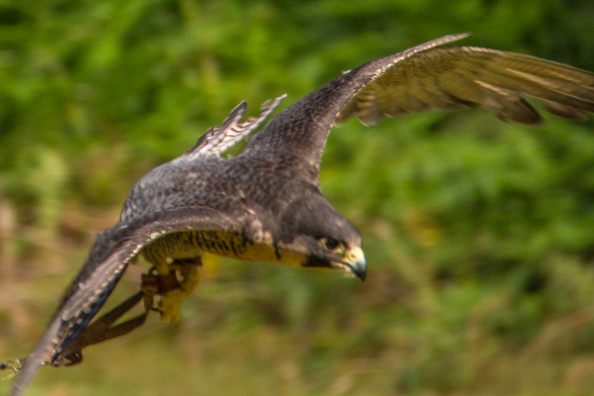 After a light lunch we made our way to a clearing in the forest. This time we were accompanied by Matilda who posed for us on a tree stump. Simon warned us he thought she might not be keen on flying and he was right. Bobby, the barn owl, replaced Matilda and he was so keen he set off from his perch before Simon was in position. We were lined up on the same side to ensure we had a woodland back ground when Bobby flew past us. Bobby did several flights for us and it was easier to get good images as owls do not have the same speed in the air as hawks. When some curious long horned Angus cows appeared to see what was going on Bobby’s attention was focused on them so he was replaced by Squeak, a long-eared owl. Squeak was also very enthusiastic and flew several times for us. Finally, Bella a Peregrine falcon, had a go. She was new to the team and this was her first public appearance. A cord was attached to her to make sure she did not fly away. The idea was she would fly in a straight line and then stop when she reached the limit of the cord. Before that happened she turned to the right and two of us threw ourselves to the ground to avoid being ensnared. It was an amusing incident and very interesting to see one aspect of the training of these birds. 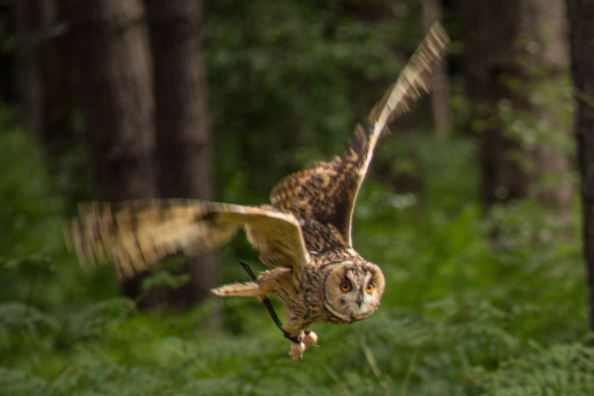 Once on the ground Bella was given her treat. She spread her wings to protect it. She had made a mantle. A word now used in common parlance especially in relation to the shelf over a domestic fire – the mantelpiece. Another phrase adopted from falconry terms is ‘fed-up’. Birds of prey store food in their gullet to digest later. The bulge in their throats is visible when they have eaten sufficient and they are fed-up. Once this happens they lose interest in the treats used to tempt them back to their handler. Falconry is a very scientific art and Simon has to keep very detailed records of his birds when he first acquires them so he can assess their ideal flying weight. He works out how much food they need so they have an appetite for treats but have been given enough food to keep them healthy. 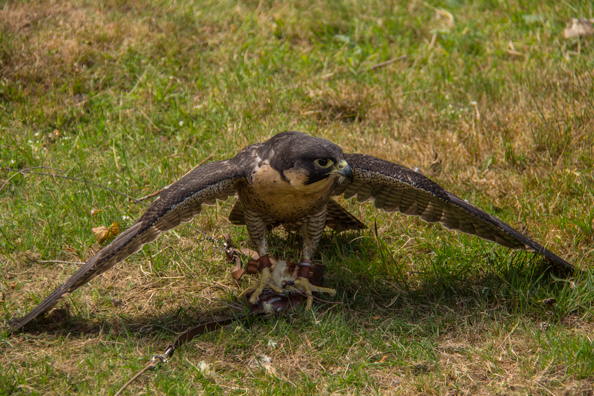 When I woke the next morning the sun was streaming into my bedroom. A few minutes later I was walking through the woods towards Thoresby Hall. The park and hall are also in Sherwood Forest. After a while I emerged from the trees onto an empty road. Ahead of me, across a field of grazing sheep, I could see a church. This was the focal point of the village of Perlethorpe. On the other side of the road was a field of ripening corn. I continued past the church and crossed a bridge over a small river. At the far end of an avenue of majestic Spanish chestnut trees was the impressive Thoresby Hall. This grade 1 listed building is one of four neighbouring country houses and estates known as the Dukeries. Each one of these country houses have been occupied by dukes during their history. Thoresby Hall was the home of the Pierrepont family the head of which had the title Earl of Manvers. When the sixth Earl died in 1955 without a male heir the title became extinct. The park remained in the ownership of the Pierrepont family but the hall and a few acres surrounding it was sold. It was acquired by Warner Leisure Hotels and opened as a luxury hotel in 2000. Guests of the hotel and Sherwood Hideaway are permitted to walk along some of the paths through the estate. Next to the hotel is the Thoresby Courtyard originally the stables for Thoresby Hall but now surrounded by boutiques, a café and the Queen’s Royal Lancers and Nottinghamshire Yeomanry Museum. 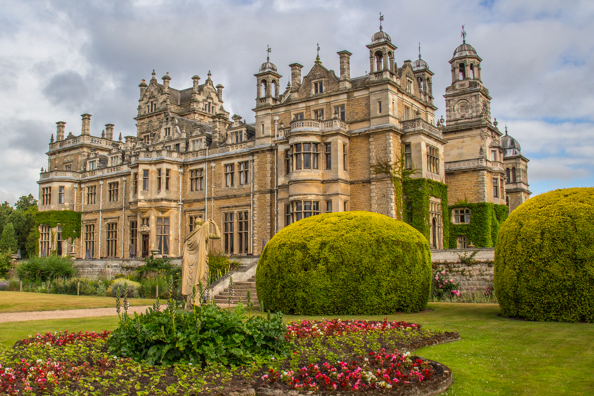 Clumber Park is also one of the four dukeries and I visited the park later the same day. Although the hall was demolished in 1938 the park is still very popular and there are some interesting reminders of its glorious past. As I drove down the long drive I passed families picnicking on the grassy areas. After crossing the historical Clumber or Carburton Bridge, I arrived at the visitor centre where I left the car and walked around the lake to the Gothic Chapel. This chapel was commissioned by the seventh Duke of Newcastle and designed by a great British architect G F Bodley. Next I walked to the Walled Kitchen Gardens and spent some time strolling through the different sections including the greenhouses. I also discovered that the gardens are the home of the National Collection of Rhubarb – there are one hundred and thirty different varieties of rhubarb. 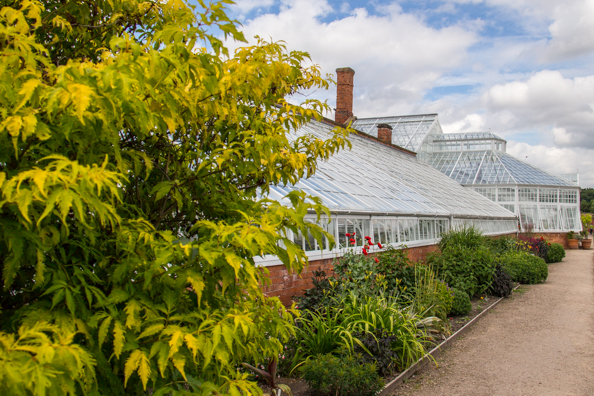 My weekend at the Sherwood Hideaway had been fabulous and I would certainly go back there again and try another one of Simon’s birds of prey experiences. He also caters for small private groups. The Sherwood Hideaway works with Simon organising hawk walks for its guests and there are some more Photography Masterclasses coming up later this year. 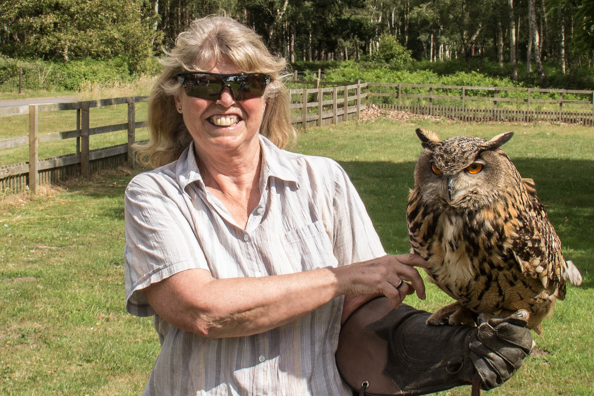