Before embarking on my trip to the Azores I knew very little about the islands in the middle of the Atlantic Ocean. The name alone makes them sound exotic and exciting. I was not disappointed. The islands, exposed mountain peaks, bubble and hiss with underground volcanic activity. They are clothed with lush undergrowth and thick forests that contrast dramatically with the stark black of mounds of lava fringing the coastline. 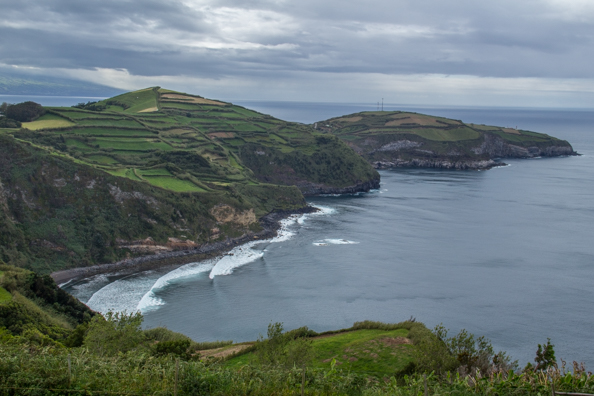 An autonomous region of Portugal the Azores have developed their own culture, a very religious one. São Miguel is the largest island in the Azores and it was the first island I visited. From the Pisão Viewpoint I could see the first convent to be built on the islands, the Convent of Caloura in Caloura. The convent, a remarkable Baroque building from the sixteenth and seventeenth centuries dominates the picturesque fishing village. By the beginning of the twentieth century was partially abandoned. Some of the complex has since been restored and it is now in private ownership. It can only be visited with the owner’s consent. It was in this convent’s church, Igreja de Nossa Senhora das Dores (Church of Our Lady of Sorrows), that the cult of Christ of the Miracles was founded. In 1530 Pope Paul II offered the nuns the image of Christ. But ten years later the statue was moved to the Chapel of Nossa Senhora da Esperança (Church of Our Lady of Hope) in Ponta Delgada to keep it safe from raiding pirates. 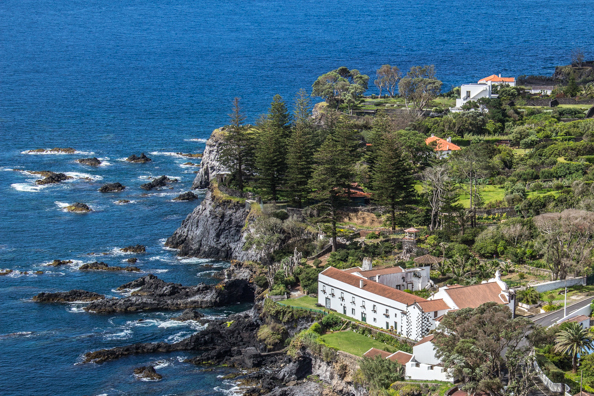 In Vila Franca the streets were festooned with decorations to celebrate the festival of the Holy Spirit. This is the most important of several religious festivals that take place on the islands. This festival continues for several weeks in villages and towns around the island. Vila Franca was the first capital of the Azores but lost its status after it was severely damaged by an earthquake in 1522. The town has an important role in Portuguese history as a decisive naval battle was fought off its shores in 1582. Today it is a prosperous little town whose wealth is derived from fishing, cattle and agriculture. It is also famous for its ceramics and most of the houses display decorated ceramic tiles on their exterior walls. Many of these feature Saint Fatima a popular saint in the Azores who has been credited with several miracles since her first in 1917. The town has a traditional main square featuring its Town Hall with two staircases on either side of the main entrance on the first floor. Between these steps is the entrance to a room that was once used as the town’s jail. Overlooking the town is an unusual chapel, Chapel of Nossa Senhora da Paz (Our Lady of Peace Chapel). 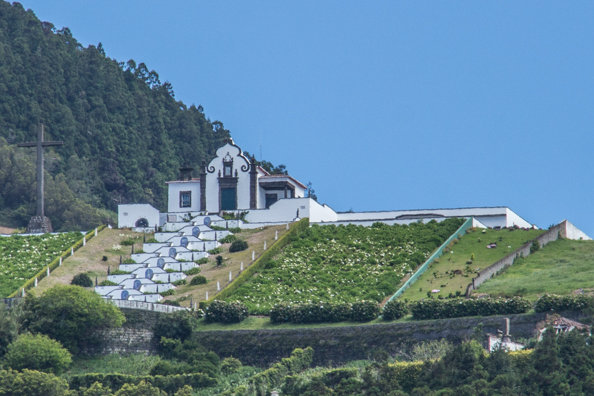 Vila Franca has another claim to fame, a pastry known as a queijada. It is made from a recipe created by the nuns of the old Convent of Santo André, on São Miguel Island. Nowadays this popular pastry is produced by two families that keep the original recipe secret. The Morgados are one of the families. They have been making the famous ‘Queijas da Vila since 1961. I stopped for a coffee and a queijada at their café above the marina. Delicious – but very small. 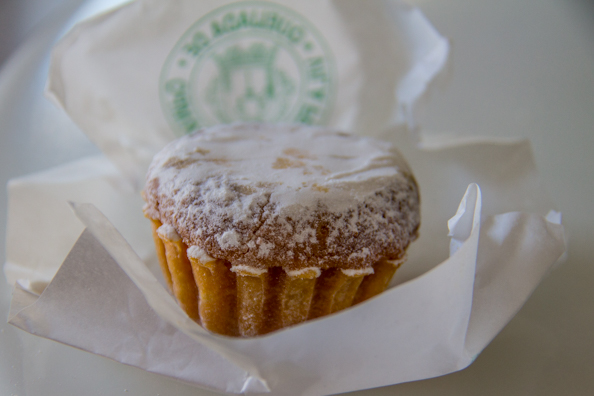 In the peaceful Furnas Valley the green waters of its crater lake, Lagoa Furnas, lap gently against its shores. In places plumes of steam rise out of limestone rocks surrounding the lake. These are fumaroles – holes in the earth’s surface through which steam and gases created by volcanic activity beneath the surface escape. They are not only an interesting sight to see but the locals have harnessed the heat and bury large pots of the traditional stew, Cozido das Furnas, in specially prepared holes. The pots are put in a hole and covered with soil and then left to cook slowly for several hours before it is ready to eat. 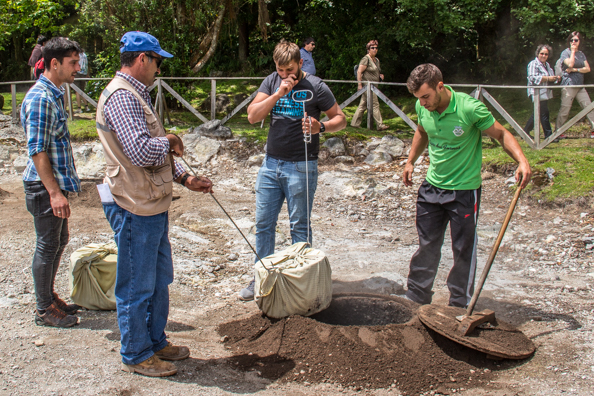 After spending some time exploring the fumaroles I moved on to the local town, Furnas, to enjoy a lunch at Tony’s restaurant that featured the famous stew. As I was eating local inhabitants were assembling outside the neighbouring church, Nossa Senhora da Alegria Church to celebrate the festival of the Holy Spirit. They were preparing to process through the town accompanied by the local band. Some of them carried crowns or doves on cushions to present to the priest the local church for a blessing. By the time they set off I had eaten my stew and could accompany them a short way along the road. It was a very happy occasion with all generations taking part. 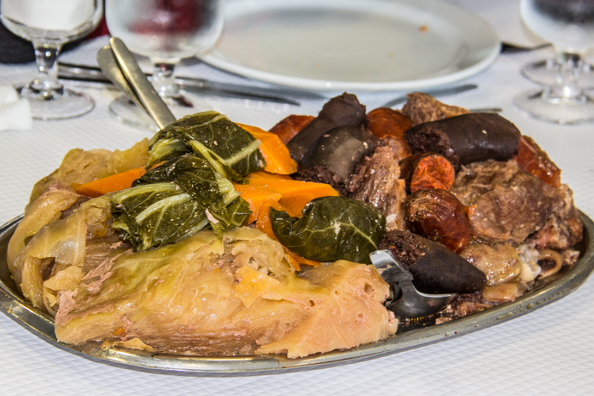 Furnas Valley is also home to the Parque Terra Nostra. There has been a garden here since the end of the eighteenth century due to the growing interest in the use of mineral water to treat health problems. Hundreds of small springs and streams, all with different properties are found in this valley and Parque Terra Nostra is located in the middle of them. Thomas Hickling, a wealthy merchant from Boston, created the original garden surrounding a simple wooden summer house. In front of this house was a pool fed by warm thermal waters (it is still there today). The original summer house is now the Terra Nostra Garden Hotel and the pool has been enlarged. I chose not to join the visitors lazing in the warm, brown waters preferring to explore the gardens. 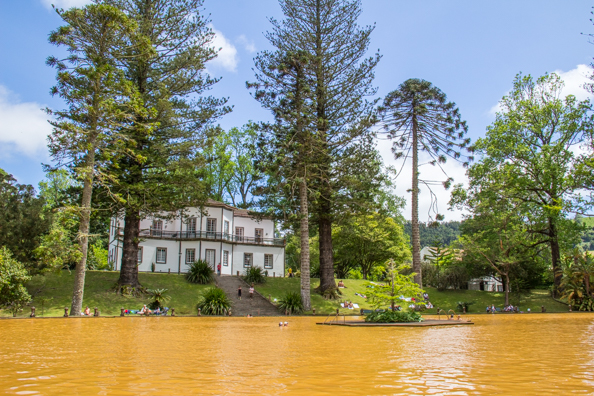 Thomas Hickling surrounded the house and pool with trees, mainly from North America. Successive owners continued this tradition, planting trees from all over the world, and creating a glorious garden. At the beginning of the twentieth century had become neglected. When it was acquired by the Terra Nostra Company (owners of the Terra Nostra Garden Hotel next door) in the mid-twentieth century the gardens were restored and extended. The gardens are a delightful mix of flora typical of the Azores and numerous plants native to countries all over the world. Numerous paths weave their way through a variety of habitats and new projects are a regular feature. I was particularly amused by a garden featuring stone animals clad in climbing plants – nature’s Jurassic Park. 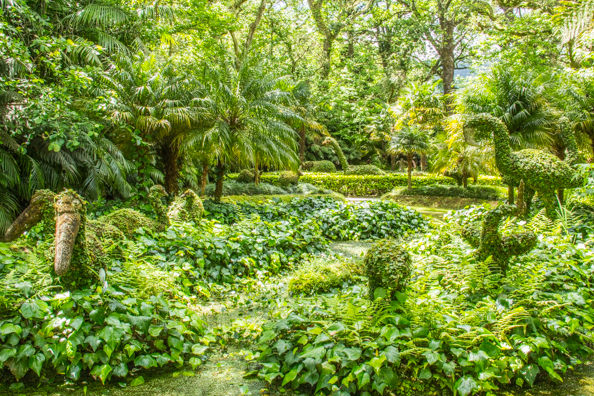 In the Furnas Volcano Caldera the fumaroles were spurting out steam and bubbling up through the little pools in the rocks. I followed a path that took me past them. On my way water fountains dispensed the local mineral waters. These were high in iron content and not very pleasant so I only tried one. These fumaroles were putting on a good display, reminiscent of a steam train with a good head of steam chugging through a valley – very impressive. But also very hot if you got too close. 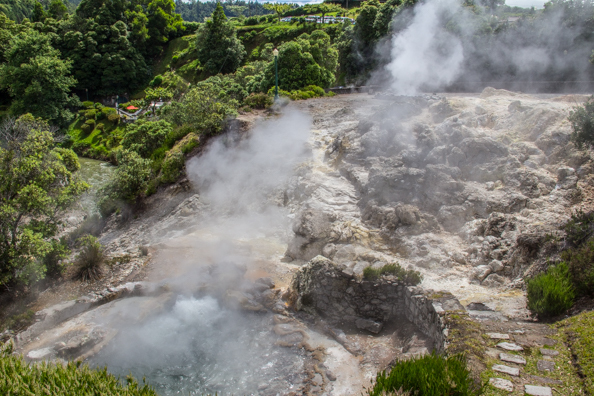 The cultivation of tea was introduced in the Azores around 1820 and quickly became popular due to the decline of the orange trade in São Miguel. Production reached a peak in the 1850s. Restrictions imposed during the First World War started a decline in this industry and by 1966 only five of the original fourteen tea manufacturers were still operating. Now there are only two tea factories Chá Porto Formoso and Chá Gorreana. The latter is also the only remaining tea plantation. I visited Gorreana Tea Plantation. This plantation has been growing tea since 1883 and it is the oldest and the only tea plantation in Europe. Mechanical methods are now used to pick the tea but the processing is still done using vintage nineteenth century English machinery. After touring the factory, I was offered a cup of tea from a choice of the three varieties of black tea produced here – orange pekoe, pekoe and Broken Leaf. A single bush can produce leaves for all three and the variety is determined by the place on the bush that the leaves are picked from. Before leaving I spent some time outside in the plantation itself admiring the sentinel rows of plants that marched up the hill beyond the factory. 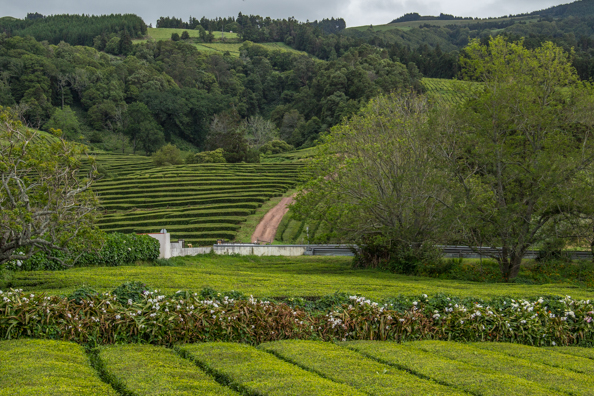 Before I completed my tour there was one final stop at a viewpoint on the cliffs. Carlos told us to look out for whales but there was no sign of them in the azure waters below us. Nevertheless, it was another opportunity to admire the wild, natural scenery of the Azores. 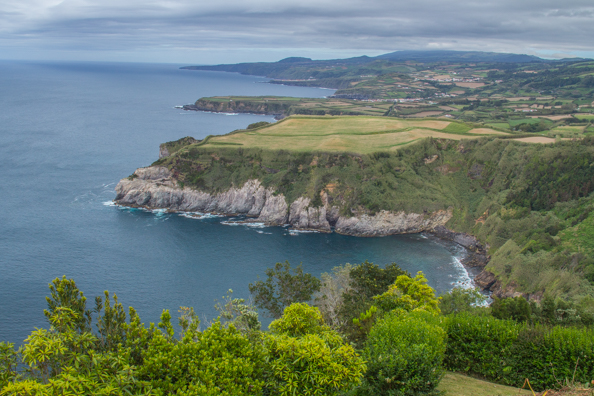