Margate and the Highs and Lows of an English Seaside Town

“On Margate Sands.
I can connect
Nothing with nothing.
The broken fingernails of dirty hands.
My people humble people who expect
Nothing.”
TS Eliot wrote this while convalescing in Margate in Thanet on the coast of Kent. He had suffered a mental breakdown. Every day he would sit in the open timber structure that overlooks Margate Sands and Nayland Rock. It seems he was soothed and stimulated by the sea and this helped him to overcome writer’s block. This excerpt is from Part III of The Wasteland which many regard as the most important English poem of the twentieth century. The shelter is still there and is now a listed building. 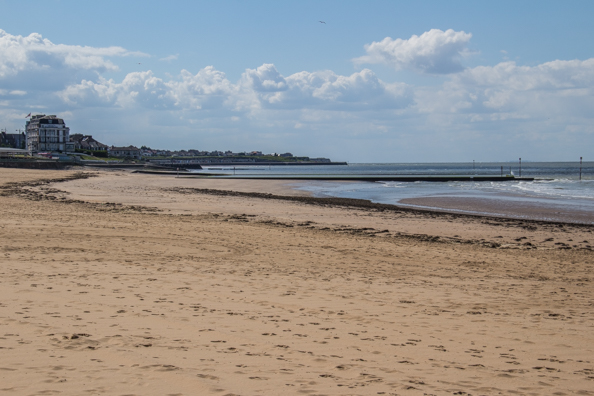 Eliot is not the only person to have benefitted from a sojourn in the little seaside town. At the end of the eighteenth century the Royal Sea Bathing Hospital was created in Margate. It was the first hospital to pioneer the open-air treatment for tuberculosis. Initially the hospital was only open during the summer months when patients would sleep on the verandas (the wards were only used in bad weather) and bathe in the sea from a bathing machine. In 1858 an indoor bath was added and the hospital remained open throughout the year. In the early 1950s the hospital became redundant as tuberculosis was no longer a common disease. The hospital building has since been converted into flats 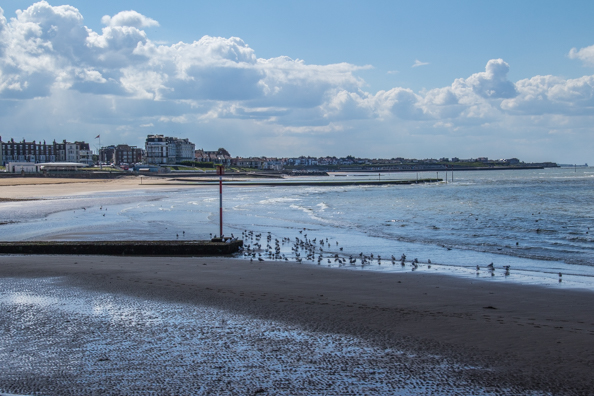 Bathing was not only popular for medicinal benefits and during the early eighteenth century bathing in the sea became popular with the upper classes. At this time Margate was a small fishing village. It had a church on the hill with a track leading to a cluster of houses around the harbour. Sailing ships, then steamships and finally trains brought a stream of visitors to the town. Margate quickly became a fashionable resort, one of the first. As the number of visitors increased so the town grew with the addition of lovely Georgian and Victorian buildings to accommodate and entertain the holiday makers. Elegant squares, fashionable hotels, and crescents with sea-views, many of which can still be seen today, made Margate an architectural treasure. In 1815 a new harbour was built for Margate by John Rennie and became known as the Harbour Arm. Steamers could now come into Margate and it became a busy commercial port. Today the small buildings along the Harbour Arm are occupied by small restaurants, cafés and bars. 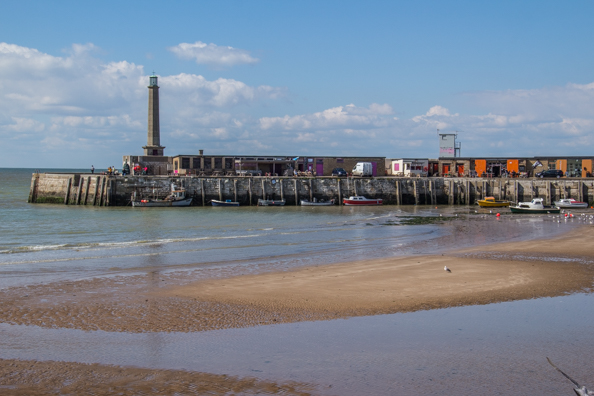 Droit House that was built for Margate Pier and Harbour Co. It is currently used by the Visitor Information Centre. The original building which was constructed in 1828 and used as the Customs Building was later destroyed in the Second World War. It was rebuilt using the original plans in 1947.  In 2001, a circular extension was added to the rear of the building which can be hired for functions. 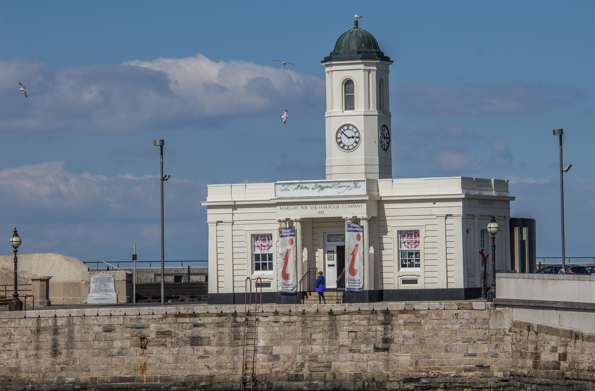 At the beginning of the twentieth century a new attraction, Dreamland, kept the visitors flowing into the town. Dreamland was the brain-child of John Henry Iles who bought the old Hall by the Sea a dance, and music hall, and turned it into an American-style amusement park. When this park opened in 1921 it featured the now iconic Scenic Railway amidst the pleasure gardens and amusements. The wooden roller coaster, a unique addition to the town, proved to be very popular. The Scenic Railway has been badly damaged by fire on two occasions but has been repaired and brought back into service. Still an attraction in the recently revamped Dreamland the railway is Britain’s oldest roller coaster in the world and Grade II listed. 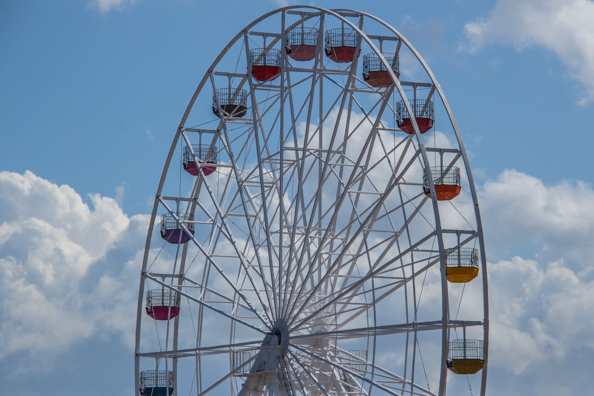 Away from the seaside Margate has some unusual attractions to offer. The Tudor House was built in 1525 and it is the oldest building in Margate. It is a transitional house as it bridges the gap between the medieval open-hall and the early, modern, two-storey houses. Since it was built it has been home to Master Mariners, Flemish weavers, cordwainers and farmers – it once had a farmyard behind it. It was bought by the local council in the late 1930s and was about to be demolished when the Tudor beams were discovered and the house was restored and it is now open to the public. 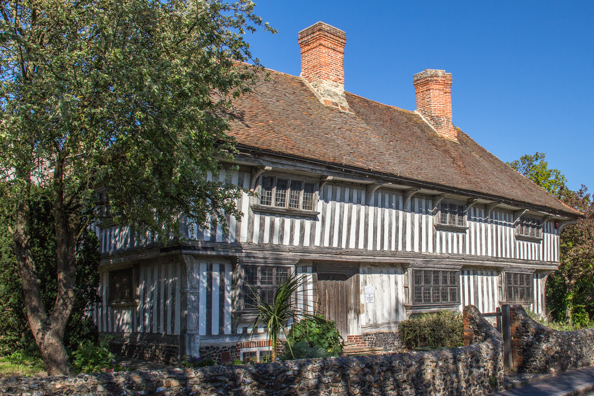 Between the Tudor House and the mysterious Shell Grotto is a new project, the Listening Wall. This is part of an experimental community greening project whose aims include the re-introduction of plants, trees and to create an oasis for pollinating insects. The Listening Wall is a big wall of plants where people can leave messages about anything. Messages can be written on the wall or posted through a private letterbox. Advice or solutions are not offered – just an opportunity to have your say. I am sure that many people wish the Shell Grotto could speak and tell us who built it and why. This subterranean structure resembling a small temple is composed of several short tunnels. Every inch of the walls of these tunnels are covered in shells that have been cemented into place. But what was its purpose? Since it was discovered in 1835 it has attracted visitors from all over the world but the mystery remains unresolved. A meeting place for a secret cult maybe? 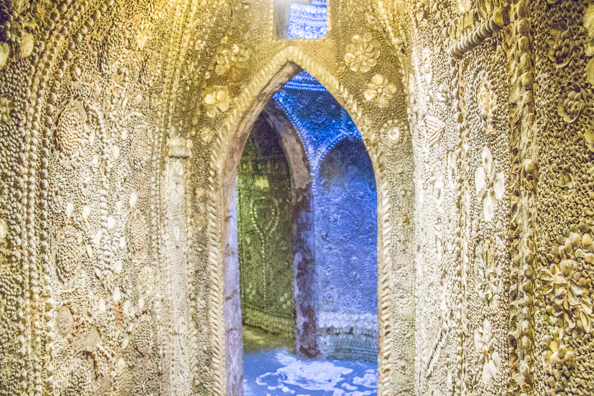 The advent of package holidays abroad in the 1950s resulted in the decline of the English seaside resort as a holiday destination. But now the tide is turning. Improved communications, renovation and restoration of historically interesting buildings and new attractions are bringing visitors to Margate again. The Turner Contemporary celebrates Margate’s most famous visitor, the painter, JMW Turner. His parents sent him to school in Love Lane in the Old Town when he was eleven. He returned to Margate when he was twenty-one to do some sketching. From the 1820s he was a regular visitor having fallen in love not only with the town but also with his landlady, Mrs Booth. When her husband died she moved to London to live with him. Her statue, made from shells stands at the end of the Harbour Arm. More than one hundred of Turner’s paintings were inspired by the coast of Kent. 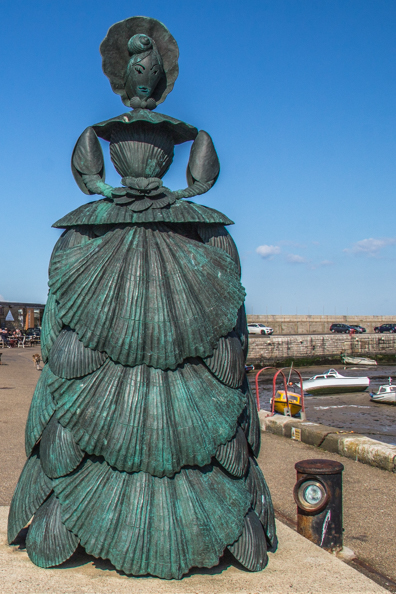 The Turner Contemporary was built on the site where the house of Mrs Booth used to stand. It has a permanent installation in the foyer beside the bookshop. Temporary exhibitions and workshop space occupy the rest of the building. It is a showcase for traditional art and ultra-modern creations. According to the artist, Tracey Emin “The brilliant thing about Turner Contemporary is that it has given people hope that things are going to change here and also put Margate back on the map.”  I am sure it will. 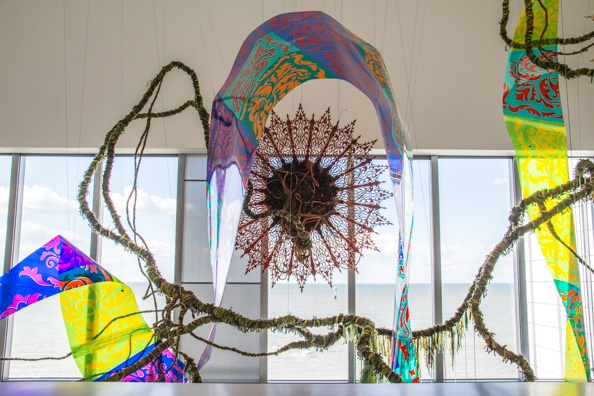