It is many years since I last visited the Bardo Museum on the outskirts of Tunis capital of Tunisia. I was thrilled to be back. Since my last visit the building that houses the museum, a fifteenth century Beylic palace has undergone extensive renovation. During this renovation one of its most prized works, the Triumph of Neptune, a large second century mosaic, formerly on the floor was put on the wall of the new entrance hall. It is the largest vertical mosaic in the world and part of the largest collection of Roman mosaics housed in this museum. 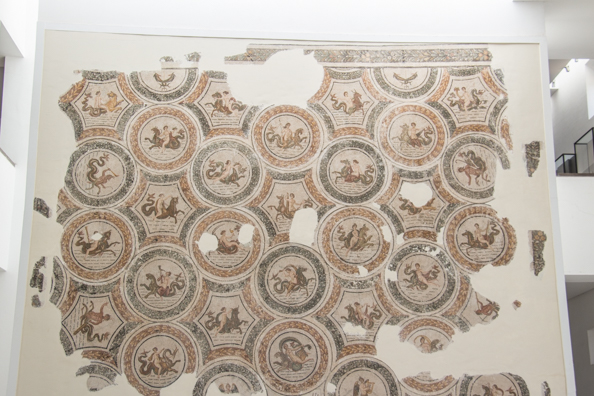 Three years after this renovation, in 2015, a tragic shooting took place in the museum as a result of which twenty-two people lost their lives . Since then the number of visitors has fallen dramatically. It seems the aim of the perpetrators to damage the economy of the country has been successful. This event is recorded by a memorial tablet on the wall of reception. We should not forget but nor should we allow incidents like this to deter us from visiting this extraordinary museum. 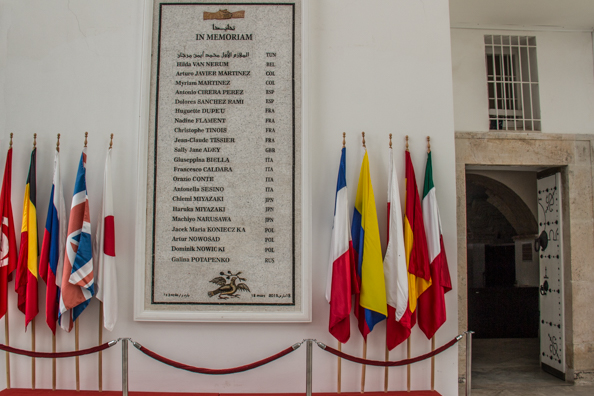 The exterior of this palace is very plain, a simple white block that does not reflect the wealth or social status of the occupants. This is typical of traditional North African architecture. However, the door of a traditional building is another matter. A Tunisian door is not just a means of separating private spaces from the outdoors. A traditional door is large and made of solid wood. It sometimes contains a smaller door creating a chicane effect, a defence mechanism, and more convenient for every day users. Generally, these doors were installed in a stone wall and were assembled using nails, large nails. The patterns made on the doors were a means of concealing these nails. The most common patterns found in the medinas (old town centres) are the eye, the firs tree and the star shape. The most common colours are blue or yellow although other colours are used. 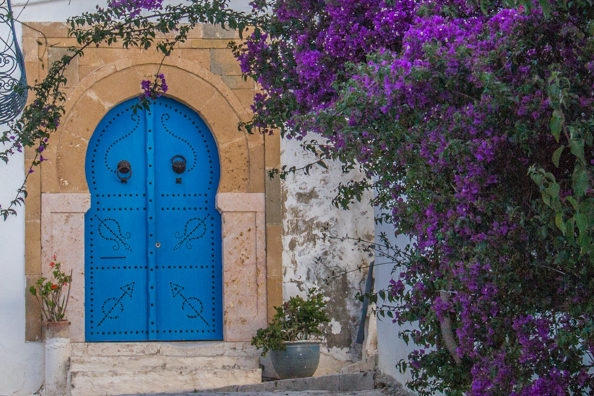 The Bardo palace is both a museum and a former private palace and the original doors are still in the palace. A lovely white door in the foyer and a wooden door that leads from the foyer into the Little Palace. Religious symbols are also common reflecting the variety of religious groups that have inhabited Tunisia. Generally, the frame of the door is grey Kadhel, a Tunisian marble. Tall doors that gave access to a courtyard were fitted with high door knockers so a visitor on horseback could knock on the door and then enter without having to dismount. A traditional door has two door knockers which make different sounds so the occupants know if their visitor is male or female – male is the left knocker and female the right. We were shown a third, plain, wooden door. This leads to the section of the palace complex where the Tunisian Parliament sits. It was in session the day I visited the palace and it was strange being so close to the seat of government. 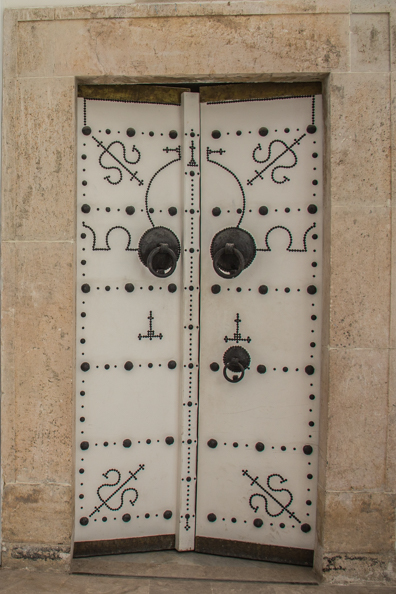 A window nearby looked out on the courtyard of this part of the Grand Palace which now houses the Tunisian Parliament. I could see the traditional moucharabiehs on the windows overlooking this courtyard. A moucharabieh is made of wood and is built around a window or balcony protecting it from the sun and the heat of summer. It has panels that can be opened. These panels allow the room it is protecting to be ventilated. Air passing through a moucharabieh was channelled towards water-filled jars cooling it before it passes into the room. They were the first air conditioners. Islamic women could look out at the city without being seen by passers-by as their tradition demanded. 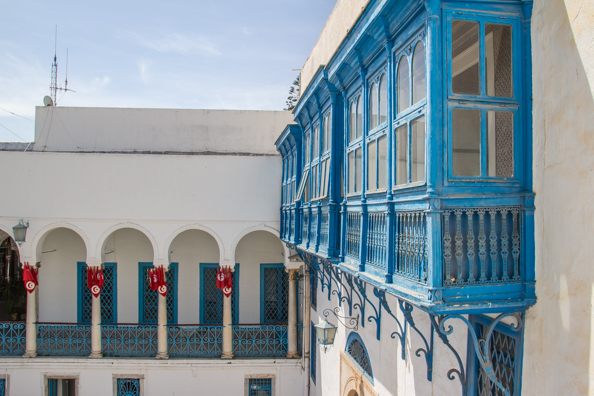 It was time to explore the museum itself and I entered through the original wooden door guarding the Little Palace. I climbed a flight of steps and entered a beautiful courtyard. This is the Harem Patio and was part of the Old Harem. The king’s bedroom was connected to this courtyard. The original museum, created in 1888 under the name of Musée Alaoui was in the Old Harem with its large, elegant halls, some covered entirely with tiles. The Great Palace was included in the museum in 1899 and later the Little Palace became a part of it. In 2009 a major renovation of the museum was begun during which the building was extended. The museum was reopened in 2012. 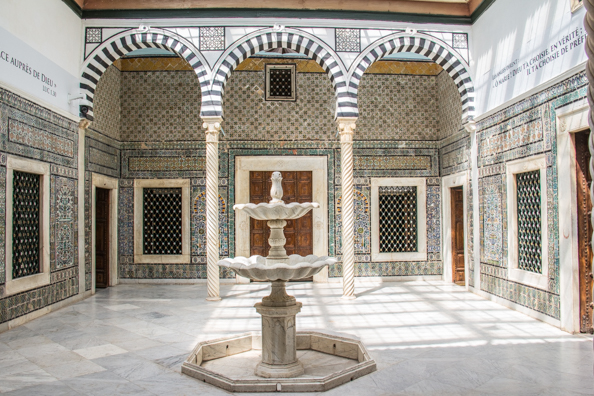 The Carthage Room is a huge room with mosaics on the floor and statues, some headless, around the perimeter. Most of the statues, representing the gods and Roman emperors, were fashioned from white Carrara marble from Italy. The large statue of Aphrodite was made from the local, pink marble. 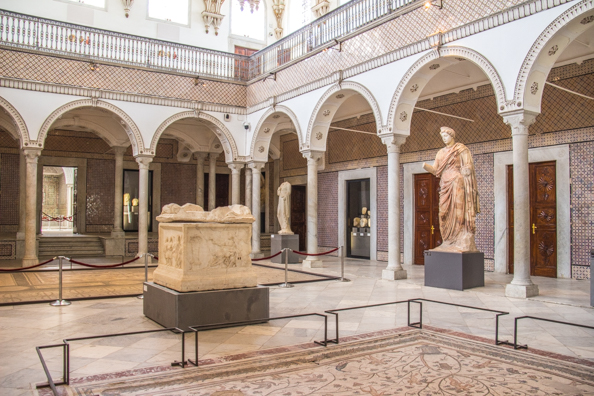 The ceiling of the gallery above this room is stunning. I was loving the fact I was looking around both a fascinating collection of artefacts that tell the story of Tunisia since time immemorial but also a beautiful building. 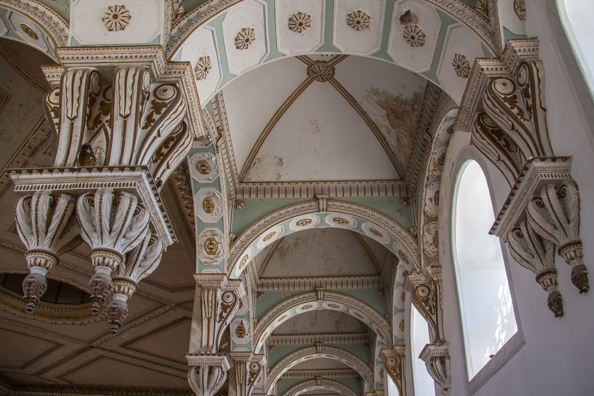 The walls of the Althiburos Room are decorated with Roman Mosaics. This hall was originally the music room of the palace and has a gallery that was linked to the harem of the palace by a staircase. This meant the princesses could attend concerts and other performances. The ceiling of this gallery is magnificent. 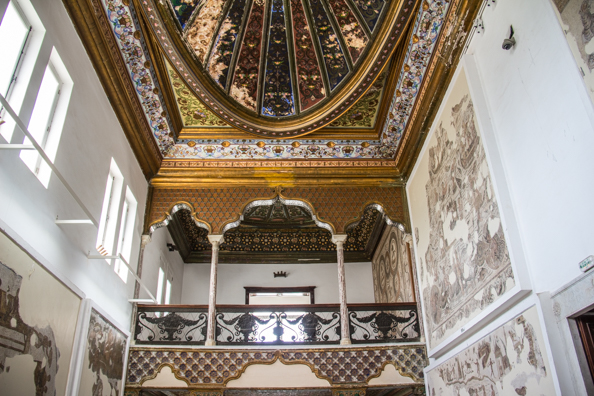 From the balcony that opens out from this room there is a view of the fifteenth century mosque that was part of the original palace complex. 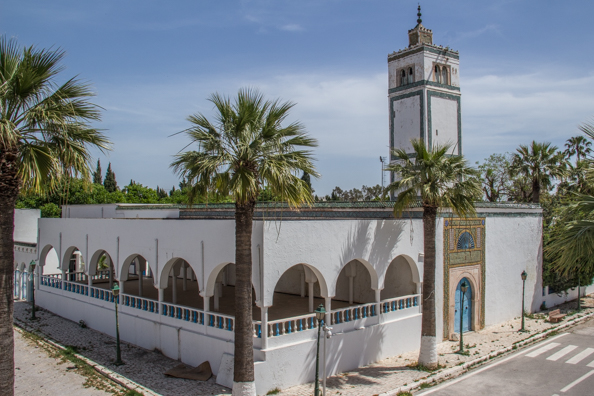 The Mosaic Room displays large mosaics on the walls and the floor. My favourite was the one depicting leisure time by the sea enjoyed by the Romans. 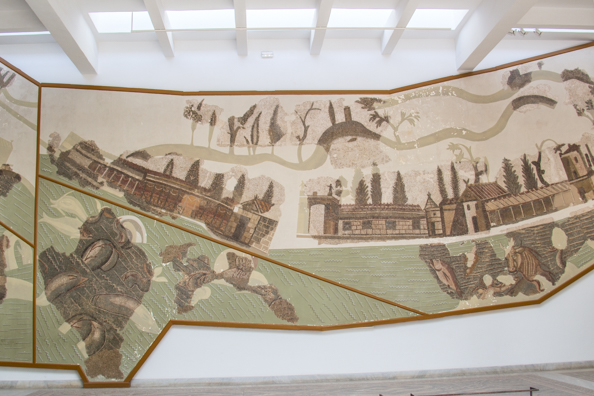 A highlight of this museum is the mosaic of the Roman poet Virgil. It is the only quality representation of this poet who is shown sitting between the muses Clio and Melpomene. It was a fitting finale to my tour of this unique museum. 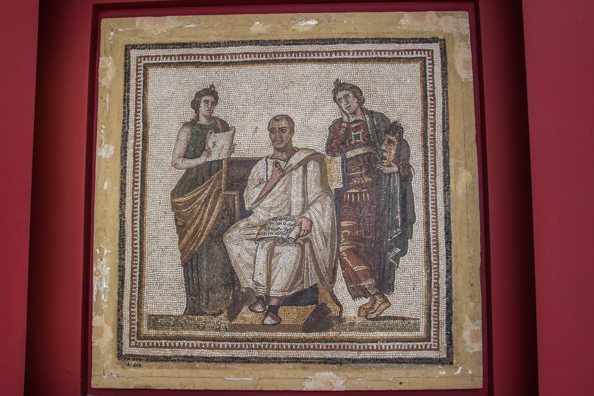