On the Street Where I Stayed in Seoul, South Korea

Shopping is a favourite pastime in South Korea which soon became evident when I first walked down the street where my hotel, Summit Hotel, was based when I visit Seoul. This hotel is on Jangchungdan-ro right in the middle of the Dongdaemun Shopping Area. This area is famous for its non-stop shopping as the shops are open from ten in the morning to five the next morning. The multi-storey shops include wholesale warehouses where every kind of product can be purchased. Soon after arriving I decided to explore my ultra-modern environment and was pleased to discover that the back streets adjoining the express way featured traditional one-storey Korean buildings. 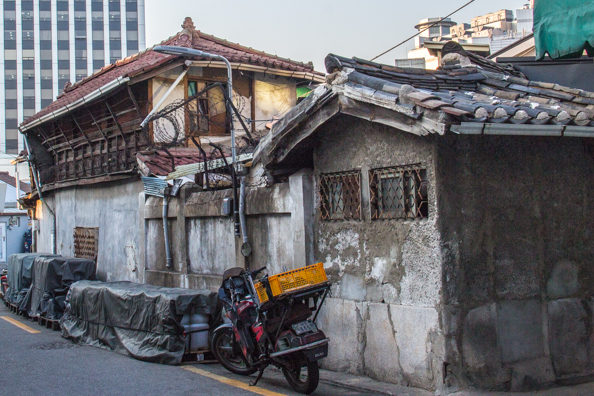 Not far from my hotel was a Presbyterian Church of such an unusual design that it is considered one of the most unusual buildings in Seoul. Kyungdong Presbyterian Church was designed by Korea’s famous architect Swoo Geun Kim in 1981. The entrance is at the back of the building at the top of a staircase leading out of a small open-air courtyard where musical performances are held. This church has no windows as such, just a skylight throwing light on the cross below. The interior features exposed concrete whereas the exterior is constructed from bricks now covered in ivy. Lunchtime concerts are held here every Thursday. 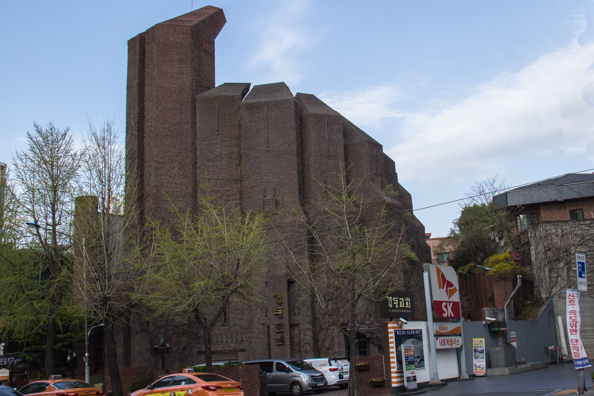 Moving on I came to a structure that resembled a space ship parked at the junction. This extra-ordinary steel structure is the Dongdaemun Design Plaza or the DDP. This, the newest and most iconic landmark of the design industry in Korea serves as a venue for design-related shows, conferences and exhibitions. 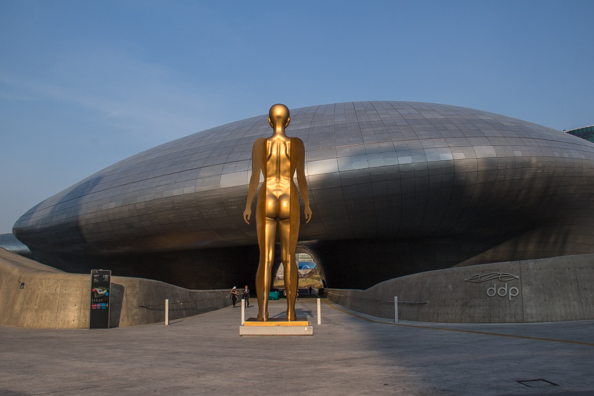 It was designed by Zaha Hadid, the world renowned architects, and has five halls: Art Hall, Museum, Design Lab, Design Market, and Dongdaemun History and Culture Park. I spent an hour in the Design Shop browsing the different sections and admiring the innovative designs of everyday objects. I was tempted by the very unusual Tinamps – a portable speaker in a tin and then discovered they came from Sheffield. The Design shop features designers from all over the world. Most impressive was the opportunity to have a model made of myself. I was tempted but as it takes half a day to take the 3D photo, process it and then make the model in plaster and paint it there was not enough time to indulge. 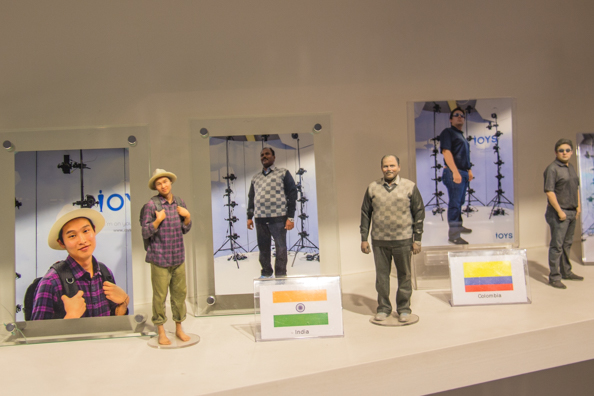 Strolling around the outside of the building I found the Dongdaemun History & Culture Park is the newest park in downtown Seoul. The park gives a glimpse of how the area was once used as a military training ground during the Joseon dynasty. It extends seamlessly onto the rooftop of DDP, making it a truly unique park in Korea. Within the park traditional buildings, relics, ruins, and cutting edge modern cultural facilities are harmoniously united. There is an ongoing programme to restore and exhibit the relics and remains excavated during the construction of the park. After wandering through the park I came to the banks of the Cheonggyecheon stream that runs through downtown Seoul before flowing into the Han River. This stream was hidden underneath the road until if was restored to its original form in 2003. Strolling along the banks of this waterway is a relaxing occupation for both locals and visitors.

On the far side of the Cheonggyecheon stream is the Heunginjinmun Gate. Built in 1390 this gate was the East Gate of Seoul when it was the capital of the Joseon Dynasty. When the gate was rebuilt in 1869 four large gates and four small gates were built in the fortress walls, Hanyangdoseong, surrounding the city. The four main gates erected in the East, West, South and North of Seoul were named with the four letters of in (benevolence), iu (righteousness), ye (propriety) and ji (wisdom) respectively to reflect Confucian virtues. It is said the letter ji was specially inserted in the name Heunginjinmun Gate to reinforce the energy of the flat land in front of the gate. Heunginjinmun Gate and Sungnyemum Gate are the two largest gates in Seoul and the only ones to have a two-storey pavilion built on the top of them. This pavilion housed the commander who guarded the gate and was used as a command post in times of emergency. The pavilion on the Heunginjinmun Gate demonstrates the architectural characteristics of nineteenth century – a simple structural assembly with various decorations. It also displays a unique characteristic, a specially built outer wall, Ongseong, an attractive addition to the gate. This both hides and protects the gate which was an easy target for invaders as it was situated in a low and flat region of Seoul. 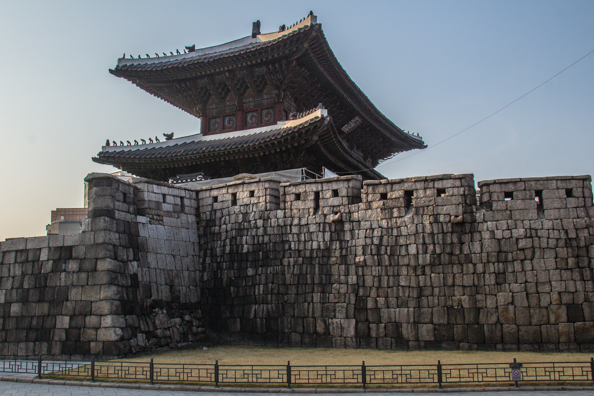 Behind the Heunginjinmun Gate is the Seoul City Wall (Hanyangdoseong) most of which has been preserved earning the accolade of UNESCO World Heritage Site. The wall was originally built in 1396 during the Joseon Period and surrounds Hanyang (the present day Seoul. It stretches for 18.6 kilometres crossing Mount Bugaksan. Mount Naksan, Mount Namsan and Mount Inwangsan. Its average height is between seven and eight metres. Different sections of the wall have been developed to allow access to the walls and there are hiking trails along the length of the walls. In the district of Dongdaemun a park, the Dongdaemun City Wall Park, has been created around the walls. Inside this park is the Seoul City Wall Museum. Inside this museum there are historical artefacts relating to the transformation of the city. It also has a permanent exhibition hall, a special exhibition hall, an information centre and multi-purpose lecture room. This park is also the start of the Excursion Trail of Hanyangdoseong.

I walked back towards my hotel on the other side of the street. Approaching the large department stores I discovered the goods had spilled out on to the street and I had to negotiate rail after rail of clothes. The other side of the pavement was lined with stalls selling street food. It it all looked very tempting but I had no idea what was underneath the deep fried batter. Particularly intriguing were some yellow and orange tubes – were they edible or for decoration only? I subsequently discovered that these were Jipangyi ice cream, hollow canes made from maize that are filled with ice-cream. I never had the opportunity to try one as this was the only place I saw them. 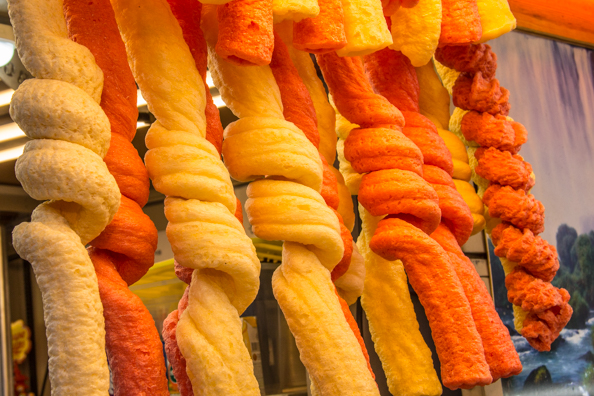 Not far past my hotel the mood of the street changed completely. After walking through a small garden I entered the Jangchungdan Park. Cheonggyecheon stream emerges again and runs through this memorial park and just inside the park the stream is crossed by Supyogyo Bridge or the Water Gauge Bridge. This bridge was built here in 1420 to measure the water level in the stream. It was briefly moved to Sinyeong-dong when Cheonggyecheon was covered over but moved back to its present location in 1965. 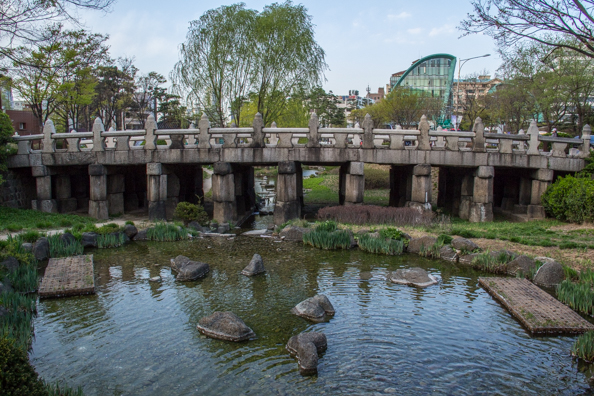 The park is located at the foot of the Namsan Mountain and was originally the site of the Jangchungdan shrine. This shrine was destroyed during the Korean War. When the area was turned into a park in 1919 the Jangchungdan Monument was placed there to commemorate the same event – the Eulmi Tragedy of 1895 when the Empress Myeongseong (Queen Min) was killed by Japanese assassins and some Korean civilians were martyred. The park is considered a landmark of patriotism as it contains the 1919 Independence Movement of Korea Memorial Stone and other monuments dedicated to people such as Han Yongun, Yu Gwansun, and Gim Yonghwan who fought for the independence of Korea. On a lighter note pretty wooden bridges criss-cross the stream that features two waterfalls at the far end of the park. The park also features several sporting facilities including the famous Bare Foot Trail which gives free acupressure therapy. I wished I had time to try this trail but a sign indicating another park above this one had already caught my eye. 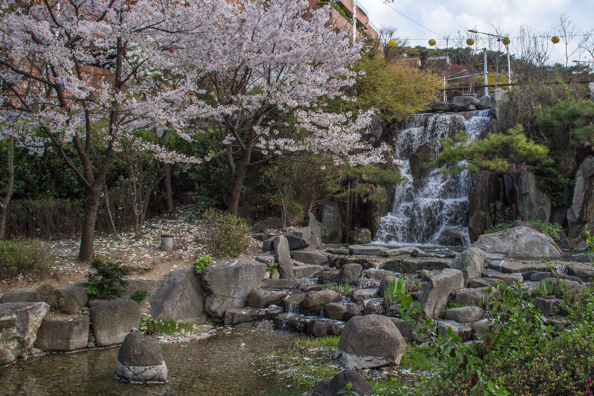 Namson Park is the largest park in Seoul. It is renowned for its walking trails that thread their way past many species of trees and plants amongst which visitors may spot some of the local wildlife such as squirrels. Covering a large area it is also home to a number of tourist attractions including Baekbeom Square, the Namsan Cable Car and Namsan Seoul Tower.  I was lucky enough to visit this park in April when the cherry blossom was in full bloom and I could enjoy the park’s Cherry Blossom Path – the longest avenue of cherry trees in the city. It was the perfect end to my day on the street where I was staying in Seoul. 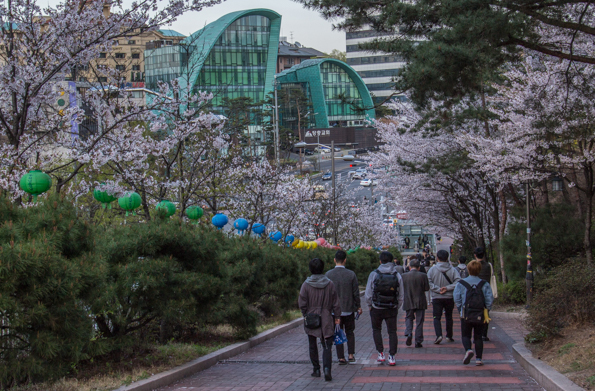