Boats and Bamboo in Arashiyama, a district of Kyoto in Japan

Arashiyama is a district of Kyoto and has been a popular destination since the nobles of the Heian Period (794-1185) would go there. Sprawling along the foot of the Arashiyama Mountains or Storm Mountains it enjoys a natural setting. It is renowned for its cherry blossom in the spring and foliage colours in the autumn. We travelled by train from the centre of Kyoto to Kameoka in the suburbs. At Kameoka we boarded a boat to complete our journey to Arashiyama through the Hozu Gorge on the Hozugawa River. This river was once used to transport the logs that were used to build many of the famous temples and castles in Kyoto and Osaka. During the Edo Period it was cleared of all obstructions and became navigable for cargo boats. When trains and trucks took over from boats the pleasure boats were introduced as a tourist attraction. 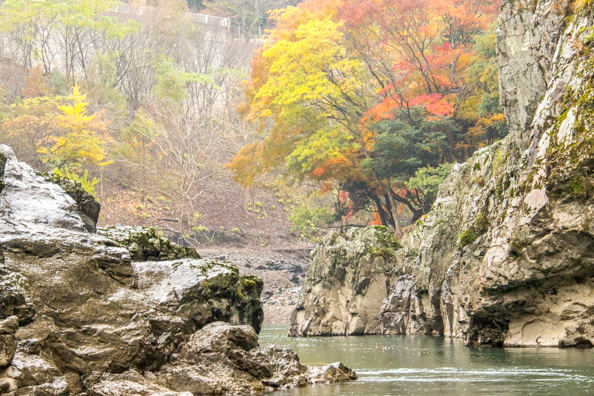 Togetsukyo Bridge which spans the Katsura River where it joins the Hozugawa River is just a few hundred metres upstream from the docking area of the pleasure boats. This famous bridge, whose name means Moon Crossing Bridge is the town’s most iconic landmark. The original bridge was built during the Heian Period and it was rebuilt during the 1930s. This bridge has often been featured in historical films and it is the ideal place to feed the koi that live in the waters that flow underneath it. It is also an integral part of a local custom. Young children (the girls dressed in kimonos) are blessed in a local temple and then have to make their way across this bridge without looking back. It is said that anyone who does look back will have bad luck. 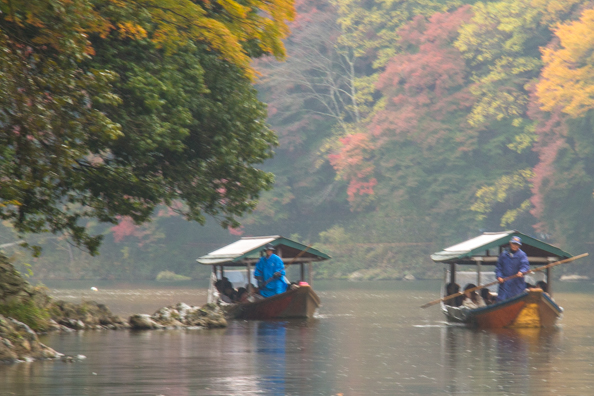 As it was raining it was not the best day for a boat trip but it had a roof and once the tarpaulin had been tied around the sides it was quite snug. There were twenty-five passengers in each boat flat-bottomed boat with three oarsmen. Drizzling rain produced an ethereal effect around us but could not dim the brilliant colours of autumn. A warning shout from our oarsmen alerted us to the fact we were about to shoot some rapids. It was brilliant. We bounced through the rushing water narrowly avoiding the rocky sides of the narrow channel. As we approached the town a shop in a boat rowed up to us, stopped alongside our boat and tried to sell us their wares. They were very persuasive but unsuccessful as everyone was aware that the town ahead was a mecca for souvenirs. 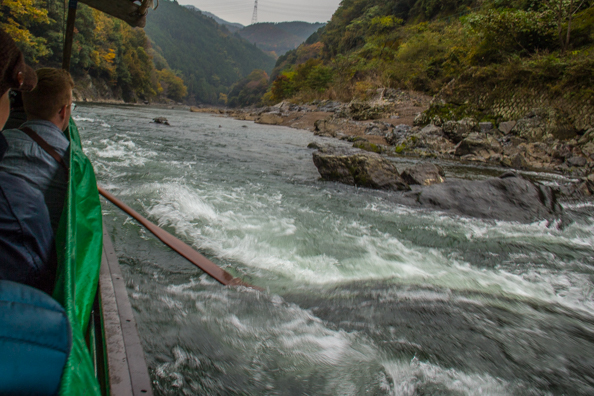 Exploring the shops along the main street I found lots of Kokeshi dolls on display. These wooden dolls were traditionally made for children but now they are becoming collectors’ pieces. Initially they were made in the Tohoku region at the end of the Edo Period (1600-1868) to earn extra money and keep the workers occupied during the winter. Today they are one of Japan’s most popular folk arts. The dolls are put together using a simple trunk topped with an enlarged hear that has a few thin painted details. Over the years the paintings on the faces have become more intricate and lifelike. Sometimes these dolls represent a theme such as a special occasion or fictional characters so they make good gifts. 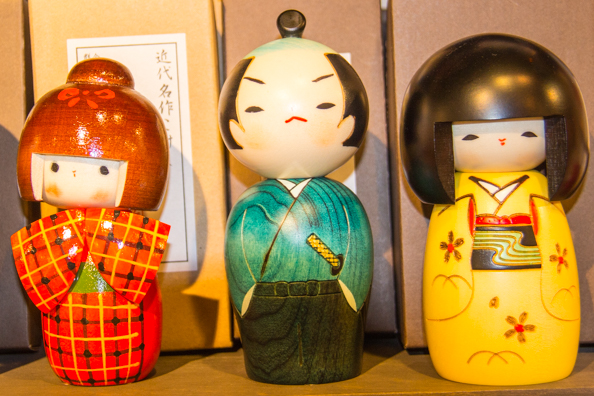 On my way along the main shopping street I noticed a blaze of colour and followed a narrow path that took me towards it. It led to a beautiful garden ablaze with bright yellow autumn foliage. In one corner I found a pair of tanuki. I was used to seeing these plump, jolly racoon dogs on their own. Racoon dogs are actually animals that are native to East Asia, but they are also major cultural icons in Japan. Their name belies their origins are they are not related to racoons but to wolves and foxes. Sociable creatures that live in close-knit communities and they are the only canines that hibernate in the winter. As well as being a real animal tanuki are mystical spirits in Japanese folklore called Bake-danuki. This name translates as monster racoon dog and they belong to a group of spirits known as yōkai that were once malevolent spirits that have now evolved into harmless, jovial creatures that bring luck and prosperity to people. This fun-loving rascal is depicted with a large stomach, large testicles and silly facial expressions. Sometimes they are clutching a flask of sake and a bunch of unpaid bills. The exaggerated testicles do not relate to virility but a legend that goes back to the nineteenth century when metal workers would wrap gold in tanuki skin before hammering it into gold leaf. It was said that the tanuki skin was so strong a tiny piece of gold could be hammered thin enough to cover a floor. The Japanese words for a small ball of gold (kin no tama) and testicles (kintama) are so similar that images of tanuki with large testicles are now associated with good fortune and stretching one’s money. As this creature is associated with prosperity they are often found in the entrance to restaurants and other businesses to entice potential customers to enter. In the western world reference to testicles is not acceptable in the same way it is in Japan and they are described as pouches. 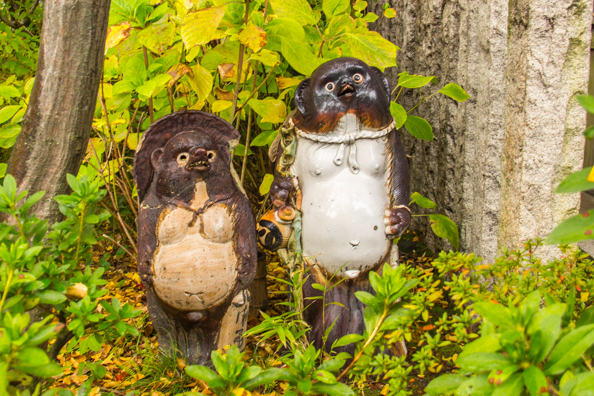 I moved on to the Tenryuji temple the most important temple in Arashiyama which has a lot of temples. This temple is a world heritage site and the head temple of the Rinzai Zen sect of Japanese Buddhism. It was built by the shogun Ashikaga Takauji in 1339 and dedicated to the recently deceased Emperor Go-Daigo. These two historically important people had once been allies but then turned against each other in a struggle for supremacy. Takauji built the temple to appease the spirits of the former emperor. Due to fire and war damage most of the temple buildings are relatively recent, dating from the Meiji Period between 1868 and 1912. However, the gardens have survived for centuries in their original form. They were created by the famous garden designer Muso Soseki. Featured in this beautiful landscape garden is a pond surrounded by rocks and pine trees against a backcloth of the forested slopes of the Arashiyama mountains. 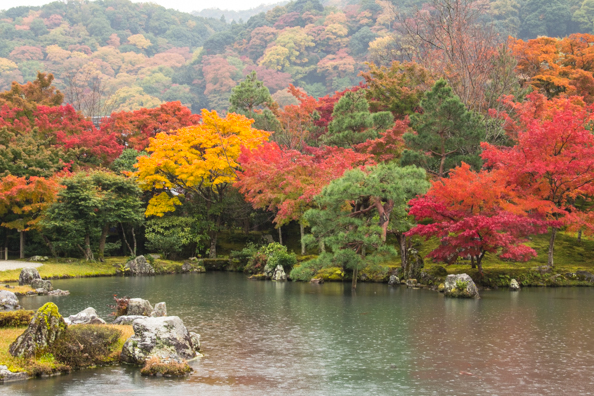 I was stunned by the fabulous autumn colours of the garden and spent a lot of time strolling along the paths that criss-crossed the natural landscape above the pond. Climbing up the path the highest point of the garden brought me to the famous bamboo grove of Arashiyama. Bamboo grows wild and abundantly here. Walking paths have been cut through groves up to five-hundred metres long. Walking through the groves is a lovely experience as the sunlight filters through the tall, green talks that sway gently to and fro in the breeze. The Japanese have a long association with bamboo both mythically and practically. For centuries local workshops have used bamboo to make baskets, cups, boxes, mats and even the oars for the boatmen who rowed us up the river. I would have loved to repeat the scenic river cruise, especially now a watery sun had penetrated the clouds, but it was the fast train back to the city for me. 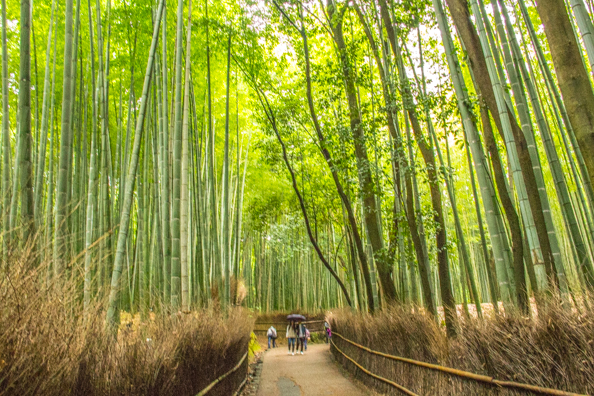