Green tea may have originated from China but it is the Japanese who have embraced it wholeheartedly. And where better to take part in a tea ceremony than Uji, the place where it all started? But this little city has more to offer than just tea. Uji is situated between Kyoto and Nara both famous Japanese cultural and historical centres. Due to this proximity Uji also developed as a cultural centre. It was during the Heian Period (794 to 1192) when the Fujiwara family reigned supreme that the Byodoin Temple and Ujigame Shrine were built. Both these buildings are UNESCO world heritage sites. The latter is the oldest surviving shrine in Japan. I started my tour at the Byodoin Temple. 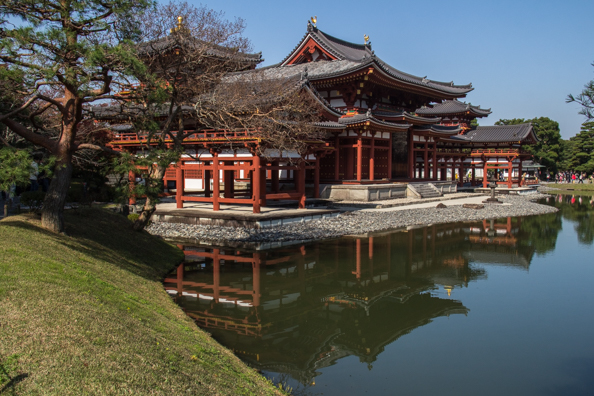 Byodoin Temple is a good example of Jodo or Buddhist Pure Land architecture. Built in 998 it was intended to be a countryside retreat for Fujiwara Michinaga, a powerful politician. His son, Yorimichi Fujiwara, turned Byodoin into a temple and added its most spectacular feature, the Phoenix Hall, in 1053. The hall, originally named Amitabha Hall (national treasure) was added to enshrine a statue of Amitabha Tathagata, also a national treasure. Soon after it was finished the building became known as the Hō-ō-dō which means Phoenix Hall due to its shape and the two phoenix statues on its roof. The garden represents the Pure Land Paradise and has been designated a historic site and a place of scenic beauty. Surrounding the Phoenix Hall, the garden includes a large pond with a sandy beach, two bridges (one flat and one arched and a small island. 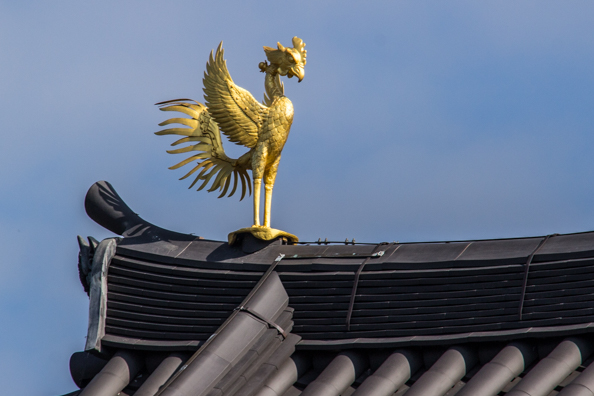 Byodoin also featured a unique treasure house (now the museum) that was largely built underground so that it would not distract from the beauty of the Phoenix Hall. Displayed in here is a collection of the temple’s most valuable artefacts and information about the history and construction of the temple. I was enchanted by a display of worshipping Bodhisattvas on Clouds and in particular one single bodhisattva painted in pastel colours. 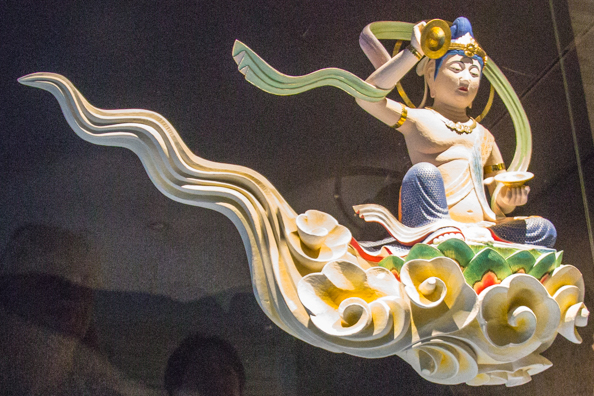 Emerging from the museum into the garden I discovered Byodoin’s temple bell. It is one of the most famous bells in Japan. There is no inscription but the reliefs of maidens and lions are thought to indicate Korean influences. 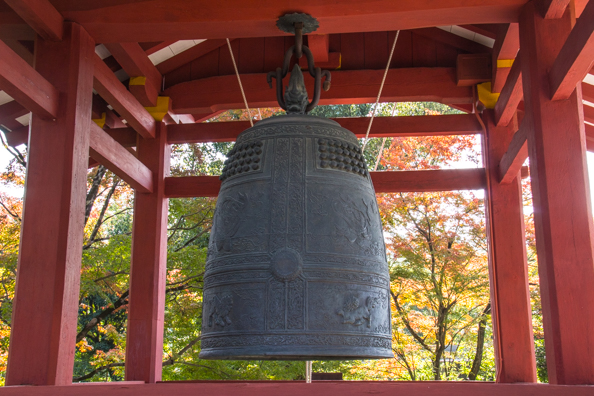 When I left the temple I made my way to the bank of the Uji River. From there I had a good view of the Uji Bridge, built around 646. Although it has been destroyed and re-built several times it is still one of the oldest bridges in Japan. This bridge was mentioned several times in The Tale of Genji. Written by, Murasaki Shikibu, a Japanese noblewoman during the eleventh century it is arguably the first novel ever written. It describes the intrigues of life in the king’s court during the Heian Period when Kyoto was the capital. Uji celebrates the references to locations in the town with statues and plaques as well as a Tale of Genji Museum. 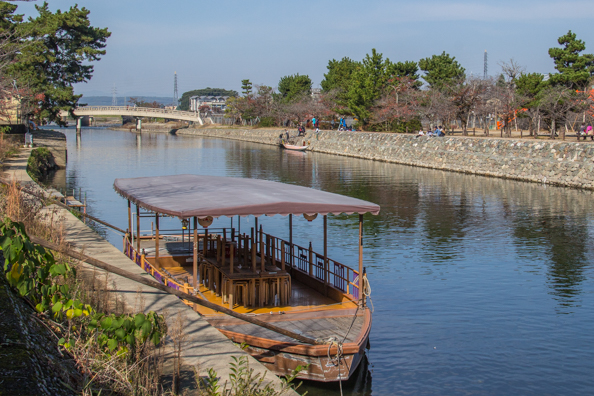 Looking the other way down the river I could see the Asagiri Bridge. This pretty red bridge links the town to an island in the middle of the river. I lingered for a while enjoying the peace and the sunshine. Bobbing in the water were some traditional boats. These are used both for river trips and cormorant fishing at night. Fishing in the Uji River has a long history which is celebrated by a fishing festival every May. Surging down the river were two dragon boats surging down the river, their crews no doubt training for the annual event that also takes place in Uji every May. These two activities are linked. Japan adopted the Chinese tradition of dragon boat racing at the end of the fourteenth century. Then it was a festival for fishermen to pray to the gods for a safe voyage and good fishing. Nowadays around two hundred and fifty dragon racing events take place throughout Japan 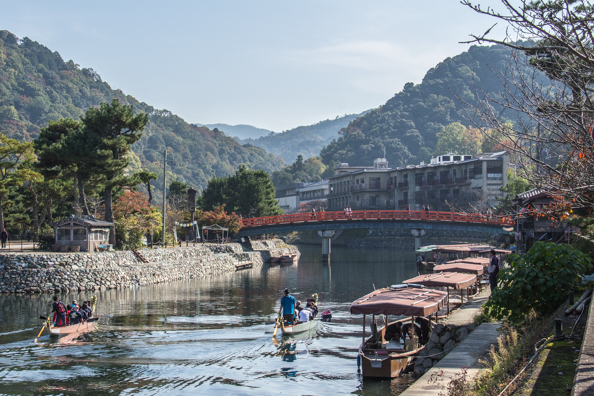 Taiho an is a traditional tea house close to the river and it was here I took part in a tea ceremony. The ceremony takes place in the main tea-ceremony room in a wooden house built in the traditional Sukiya-Zukuri style. Before entering the room participants must remove their shoes and on entering sit on the tatami mats that covers the floor. A brightly coloured sweet snack was placed in front of each guest. It was autumn and the colours reflected the season. 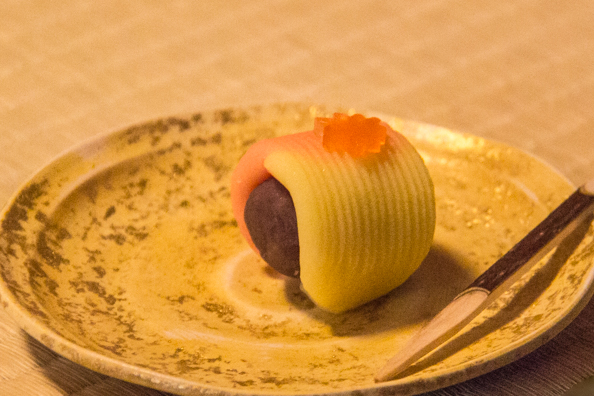 The colours of our snack blended nicely with the decorated bowls in which we were served our green tea – decorated with autumn leaves they also represented the current season. Japan began growing green tea when the first seeds arrived from China during the Tang dynasty (618-907) when relations between the two countries were very good and cultural exchanges were taking place. The first mention of a formal tea drinking ceremony is from the eighth century and during the same period a Chinese Buddhist priest wrote a book, Cha Ching, about the correct method for preparing tea. By then tea, which was initially prepared as a medicine, was evolving into a beverage. During the same period in Japan tea was mainly consumed by priests and noblemen as medicine. Tea was a rare and valuable commodity until the end of the twelfth century and the rules and formalities that evolved relating to its consumption reflected this. As the relationship between China and Japan by this time had deteriorated the Japanese had to develop their own traditions and the tea ceremony with its multitude of rules and rituals was created. There are even different ceremony types for the time of day or the season of the year. My tea, made from powdered green tea or matcha was very green and very bitter but it did compliment the sweetness of the snack. 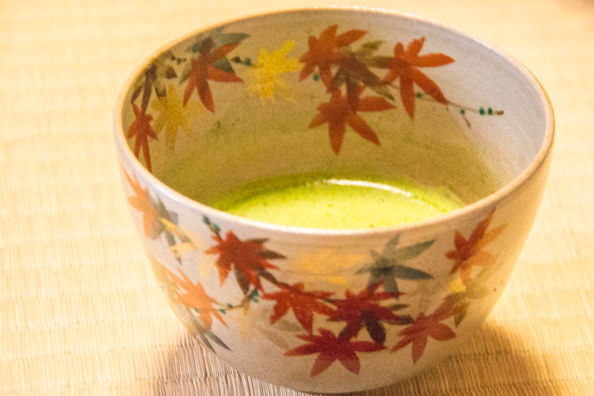 Every year on the first Sunday in October the Uji Green Tea Festival takes place. The celebrations begin with the ritual drawing of the famous fresh water from Uji Bridge commemorating the three forefathers of the Japanese tea ceremony, Zen Master Eisai, Buddhist Priest Myoe, and Sen-no-Rikyu. I was not there for this festival but just walking up Byodoin Omotesando appreciates the importance of green tea here. This street is lined with shops proclaiming a heritage of green tea cultivation. The surrounding area was the first place in Japan where it was grown. Since then it has developed many products using it. I settled for green tea flavoured ice-cream sprinkled with matcha. 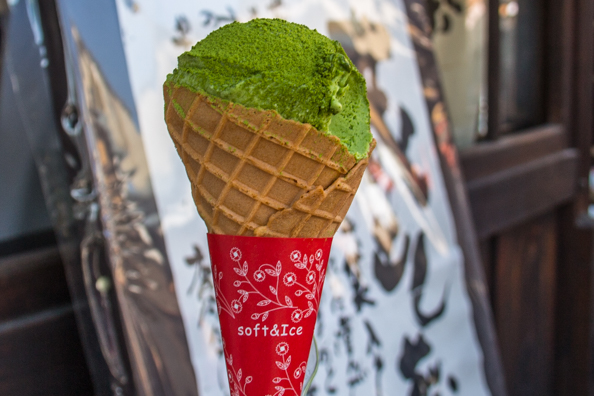