Shinjuku - A Tokyo Suburb in Bloom

Shinjuku, a suburb of Tokyo, is home to both the busiest railway station in the world and one of Japan’s prettiest parks, Shinjuku Gyoen National Garden. I loved the contrast between the two – once I had worked out which exit I needed from the huge station complex. The Southern Terrace is an open terrace lined with restaurants and famous for its decorative lights. I was there in November when the Christmas lights were on display. It was like walking through wonderland. 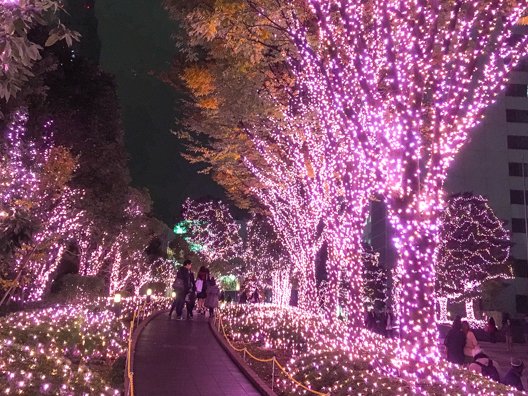 On my way to and from the station I would cross the Southern Terrace as its elevated position enabled me to pick out landmarks, not just my hotel, Sunroute Plaza. From the Southern Terrace http://www.japan-talk.com/jt/new/shinjuku-southern-terrace a bridge crossed the road and the steps were very close to this hotel. In the forest of high-rise buildings this was the quickest way through the station and surrounding streets. It was also a good place to eat. The first evening I had dinner in Shinjuku I went to Tavern in S. The restaurant was busy and the atmosphere was inviting. I was welcomed by a waiter and taken to a seat at the bar. I felt very comfortable eating there on my own. All the staff were very efficient and friendly. I was sitting in the prime position to enjoy the fabulous mural that covered the whole back wall. The food was good too and unusual. I had a tasty four cheese pizza with honey and walnuts. 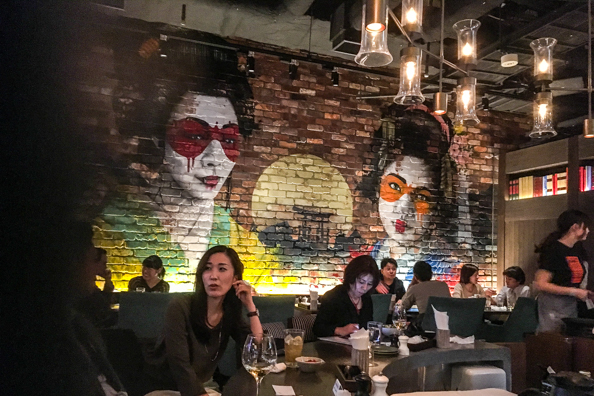 Not far from Shinjuku station visitors and local inhabitants can enjoy the tranquillity of one on Japan’s largest and most popular parks, Shinjuku Gyoen National Garden, one of Tokyo’s largest parks. Just a short walk from Shinjuku station this park has a very interesting history. It was created during the Edo Period (1603-1867) in the grounds of a private mansion belonging to a feudal lord, Lord Naito. Later it was converted into a botanical garden before being transferred to the Imperial Family in 1903 who used it for recreation and the entertainment of guests. The park was almost completely destroyed during World War II, but was eventually rebuilt and reopened in 1949 as a public park.

The gardens cover one hundred and forty-four acres blending together three distinctive styles, a French Formal Garden, an English Landscape Garden and a Traditional Japanese Garden. The latter, the oldest of the three, is considered to be one of the most important Japanese gardens from the Meiji era. A traditional Japanese landscape garden, it features large ponds dotted with islands and bridges. Well-manicured shrubs and trees surround the water together with several pavilions and the Kyu Goryo Tei (also called the Taiwan Pavilion) which was built in 1924 to commemorate the wedding of Emperor Hirohito or the Showa Emperor. It was one of the few original buildings to survive after the Second World War. 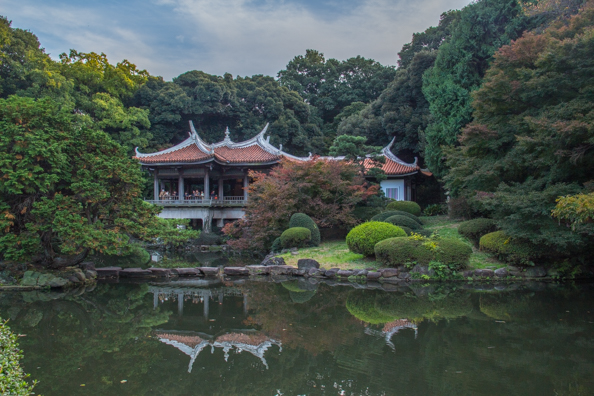 There are more than ten thousand trees in the garden. It was the first garden to grow trees that are not endemic to Japan such as tulip trees, plane trees, Himalayan cedars and bald cypresses. I started in the English landscape garden, a more natural area than the rest of the garden. It features wide, open lawns surrounded by flowering cherry trees. There are more than twelve different varieties. From late March to early April the lawns are green islands in a sea of cherry blossom. As I was there in November I missed the cherry blossom but I was rewarded by the stunning colours of the maple trees that are abundant around the Japanese garden. The colours of the leaves in the forested areas of the park create a splendid fusion of autumn colours. Amongst the trees the visitor will also find a restaurant, an information centre, and an art gallery. There is also a lovely greenhouse. This greenhouse was originally established for the purposes of research and the growing of orchids. It was renewed in 2012 and now contains a botanical garden with over five hundred species of plants including orchids, plants from the subtropics, plants in danger of extinction, trees, ponds and water falls. It resembles an indoor jungle and is well worth a visit. 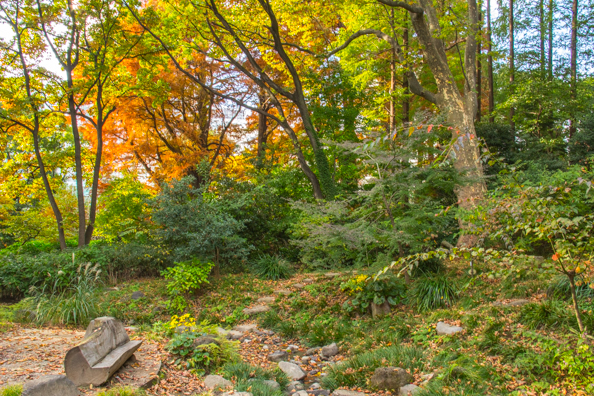 There was another treat in store for me. During the first two weeks of November a chrysanthemum exhibition is held in the Japanese garden. Temporary pavilions display different varieties of this flower that have been developed over the centuries. Japanese culture embraces the language of flowers. To the Japanese, there is a flower for every time of year and in autumn it is the chrysanthemum known in Japan as the Kiku-no-hana or Kiku. During this season the chrysanthemum it is celebrated in festivals, shows and home displays. Not only does this flower symbolize the season it also represents Japan itself. The monarchy is referred to as the Chrysanthemum Throne and the Imperial crest is a chrysanthemum blossom. It is included in the seal that is embossed on Japanese passports and it is depicted on the ¥50 coin. Royalty came to love the flower because they believed it had the power to prolong life. It was during the Edo period (1603-1867) that its cultivation reached its height when different varieties of chrysanthemums were introduced and became popular as potted plants. At that time skilful techniques were developed for displaying and enjoying chrysanthemum flowers. At the end of this period, some gardeners living in Edo (now Tokyo) made Kiku Ningyo. These are dolls made of live chrysanthemums. They represent famous features in the Japanese historical tales. These dolls can still be seen in local parks during the autumn celebrations. As I strolled around the traditional Japanese garden I came across some stunning displays of these flowers. 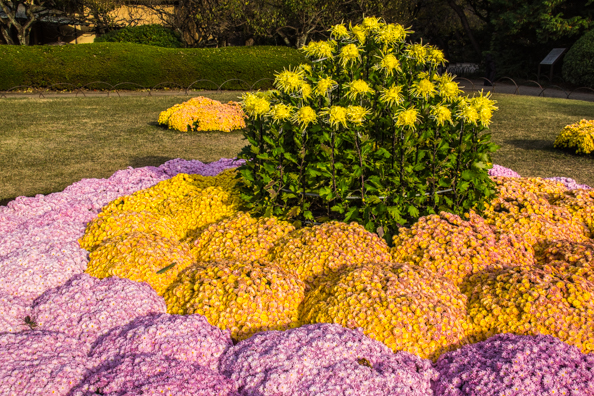 Of all the different varieties of chrysanthemums I saw the Edo-giko, developed during the Edo period, was my favourite. I thought its shaggy petals gave this flower real character. 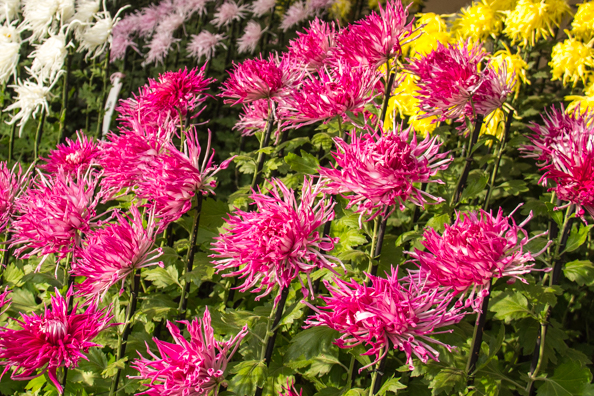 Wandering through the seclusion of the trees it was difficult to believe I was so close to the busiest suburb of Japan. But occasionally I spotted a reminder of the high-rise metropolis surrounding the park and in particular the clock tower. The clock face of the DoCoMo tower faces Shinjuku’s busy transportation district telling the time for the hundreds of thousands of commuters who hurry past it every day. Its design reminded me of both the Chrysler Building and the Empire State building in New York. The clock, which is fifty feet in diameter, was added to the tower in 2002 to mark the tenth anniversary of the DoCoMo company.

Dusk was falling when I left the garden and returned to my favourite haunt, the South Terrace. I was in the shopping mecca of Tokyo and it was time for some retail therapy. Close by were Lumine and Takashimaya in the Times Square Shopping Plaza. I decided to explore Lumine as I knew this store had a floor where I could choose from several different restaurants to have dinner. Merchandise in this huge department stores is so beautifully presented I soon found several items I never knew I needed. And on the sixth floor I found a restaurant that served Okonomiyaki. This Japanese pancake or omelette was traditionally prepared to use up leftovers. Okonomiyaki restaurants let you customize your order. In some restaurants you can cook your own at a grill set into the table. I chose to have mine cooked for me. It was delicious. 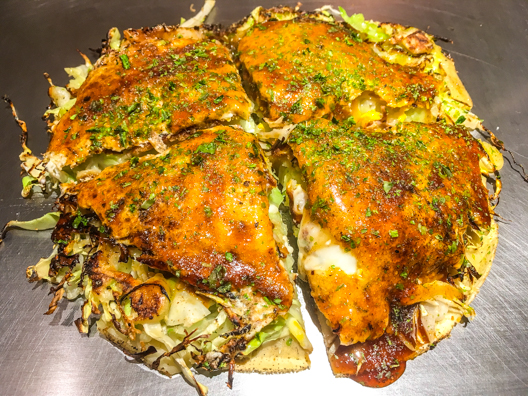