Rome is the densely populated and intensely popular capital city of Italy. But, right in the middle of its extensive urbanisation is the large and extraordinary public park, Villa Borghese. It is thanks to the cardinals and popes of long ago that this area has survived as an oasis of tranquillity in a modern city. It is thanks to their wealth that the park is sprinkled with beautiful fountains and the occasional temple. 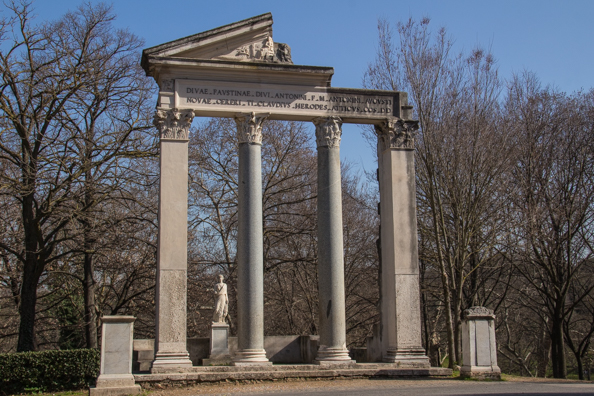 During the sixteenth century there was a vineyard on the land acquired by Cardinal Scipione Borghese in 1605. Scipione was a nephew of Pope Paul V V. The Borghese family, a noble and papal Sienese family moved to Rome during the sixteenth century and quickly accumulated wealth and prominence thanks to their connection with the Roman Catholic Church. When Camillo Borghese was elected Pope Paul V in 1605 he made Scipione a Cardinal and head of the Vatican government. Through his position Scipione was able to accumulate great wealth through papal fees and taxes. He was a passionate are collector and invested a lot of his money in the family art collection which is now on display in the Galleria Borghese. He purchased and commissioned art by several renowned Italian artists including Caravaggio, Raphael, and Titian. An ardent patron of the young sculptor Gianlorenzo Bernini he helped him rise to fame in the seventeenth century. One of the most famous pieces in the Galleria Borghese is Bernini’s Apollo and Daphne. 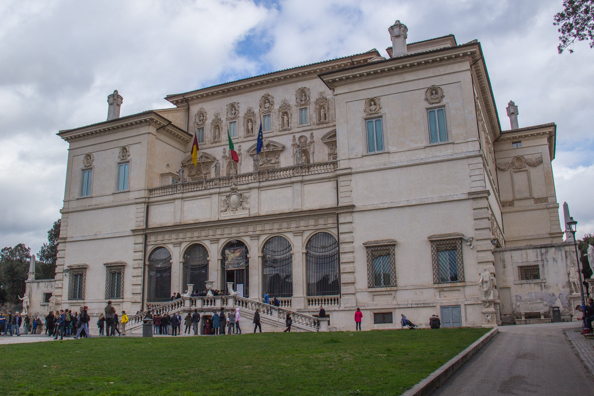 Galleria Borghese was originally built as a villa for Scipione in the large park known as Villa Borghese. Its construction was begun in 1607 by the architect Flaminio Ponzio and it was completed by Giovanni Vasanzio. Its design was based on a sketch done by the cardinal himself. When Scipione acquired the land it was a vineyard but he transformed it into a park essentially divided into two parts, the Orangery and very formal, landscaped gardens with geometric shapes designed by Domenico Savino da Montepulciano. The large orangery is now the home of the Museo Carlo Bilotti. During the clashes that led to the fall of the Roman Republic in 1849 the building was badly damaged but following its reconstruction as a museum some of its former glory has been restored. The enormous park is also home to many other lovely buildings, statues, fountains and follies. In the 1770s the Scottish artist Jacob More created an English style, informal setting for the Borghese family. The Borghese family retained possession of Villa Borghese for three centuries. In1903 the city of Rome obtained Villa Borghese from the Borghese family and opened the park to the public. 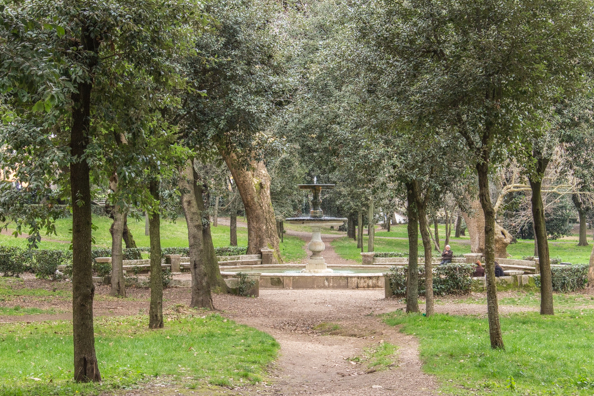 I approached Villa Borghese through Piazza del Popolo. Above me I could see the terrace of Piazza Napoleone in the Pincio part of the park. The Borghese family had extended the park over the years by acquiring neighbouring properties including the villas built by the Pincio family on Pincio hill. When Giuseppe Valadier re-designed Piazza Popolo between 1816 and 1834 he linked the piazza and the Pincian Hill of ancient Rome with flights pedestrian steps climbing up beside Fontana della Dea di Roma (Fountain of the Goddess of Rome). I decided instead to seek the shade of the trees in the park and left the piazza through Porta del Popolo, crossed the Piazzale Flaminio and entered the park. 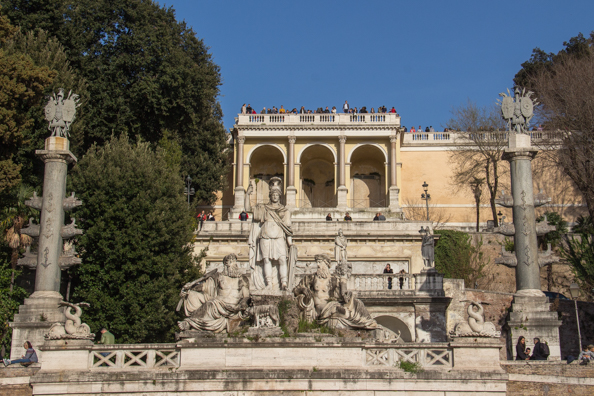 The first thing I noticed when I began to walk along Viale Giorgio Washington was a bus stop and it was good to know that I would not have to re-trace my steps to find some public transport. I also discovered that it was easy to hire a bike to explore the park. A little further along this road is the Fontana di Fiocco also known as the Fontana di Aesculapius as there was once a statue of Aesculapius under its triumphal arch. A copy of this statue that replaced the original in 1986 is now in the Museum Pietro Canonica, also in the park. This fountain was built in 1830 by the architect Luigi Canina to create some interest at the end of the long oak-lined avenue that leads into the park from Piazzale Flaminio. On top of the arch is an eagle, the heraldic symbol of the Borghese family. 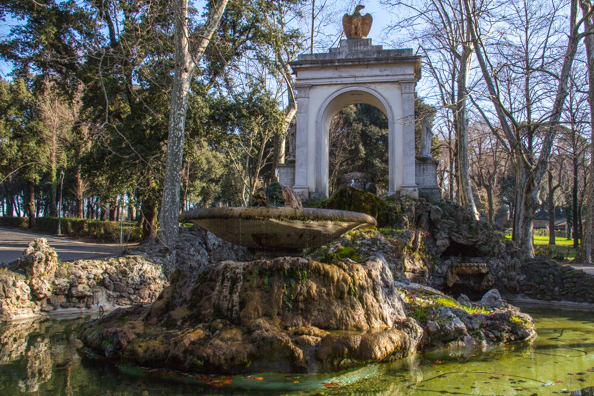 During the period between the beginning of the seventeenth century and the early twentieth more than fifty fountains were built in the Villa Borghese park. Some were built for decoration, some for refreshment and some as natural elements. One of the most unusual is the Fontana Ovale, also known as the Fontana Rotonda, which was built in 1908. It is a large basin with a rocky mound in the middle out of which the water bubbles. I spent some time there enjoying the reflections in the water before moving on. 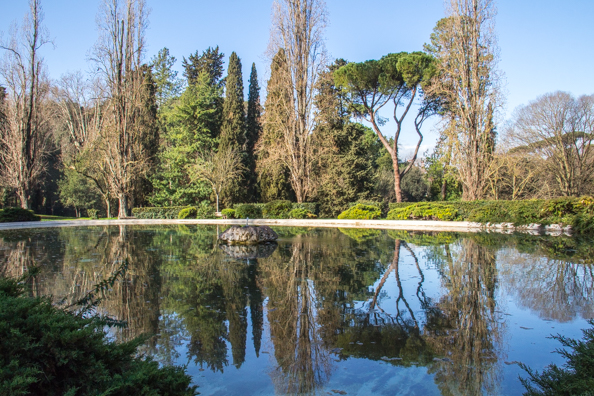 Another interesting water feature is the Water Clock or hydrochronometer. It was built by a Dominican priest, Giovanni Battista Embriaco in 1867. It was exhibited at the universal exposition in Paris in 1867 where it won several prizes. When it came back to Rome in 1873, it was placed in the Villa Borghese gardens in a setting designed by the architect Gioacchino Ersoch – a small island surrounded by a simulated forest. It is still there and still keeping time. 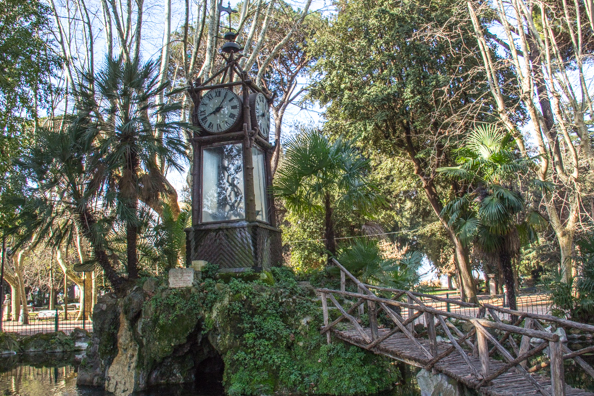 Behind the ruins of Tempio di Antonino e Faustina is an area known as the valley of the plane trees that formed part of the original park created by Cardinal Scipione Borghese. This valley occupies an area previously known as the Barco. The Barco was designed for hunting and was populated by several species of deer including roe deer and fallow deer, as well as peacocks and ducks. The area became known as the Valley of the Plane trees after forty plane trees were planted there. These trees were planted around a fish pond that was subsequently enlarged and improved with the creation of two islands connected to the shore by bridges. They were constructed as a resting place for the ducks and peacocks as well as the swans that Scipione had brought the park from Brussels. Ten of these trees are still there. At the end of the eighteenth century Marcantonio IV Borghese commissioned the architects Antonio and Mario Asprucci (father and son) to transform the villa. They created a new pond in the Lake Garden and drained the old fish pond. Following these alterations, the valley was no longer used for hunting. Antonio Asprucci also built the Temple of Aesculapios in the Lake Garden. 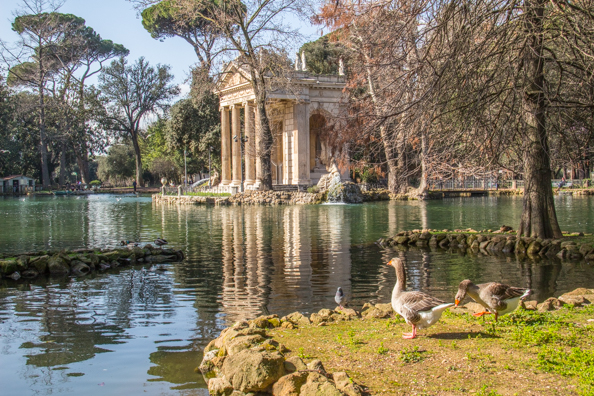 The temple was built on an artificial island in the middle of the lake towards the end of the eighteenth century. It is dedicated to Aesculapius, the God of Medicine. At first the intention was to create a simple façade to accommodate the colossal statue of Aesculapius, found in the ruins of the Mausoleum of Augustus. http://www.romesightseeing.net/mausoleum-augustus/ In the subsequent renovation the building was transformed into a small, isolated temple, visible from all sides, that reflected its image on the surface of the lake. The lake is very popular with visitors who can hire boats and row around the temple. 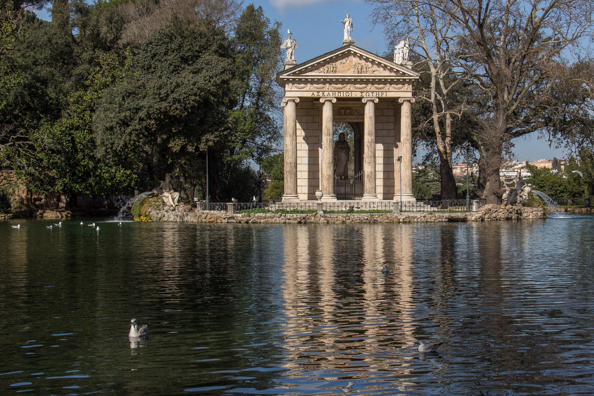 Villa Borghese has earned the nickname Park of Museums and visitors have several important ones to choose from. The Museo Pietro Canonica http://en.museocanonica.it is located in the heart of Villa Borghese. It occupies a seventeenth century building called Gallinaro originally a shelter for ostriches and peacocks. It was enlarged at the end of the eighteenth century with a crenellated wall that has the name Fortezzuola. It was the home and studio of Pietro Canonica http://en.museocanonica.it/il_museo/figura_di_pietro_canonica/ (1869 – 1959), artist, sculptor and musician, from 1927 it was the home and studio of the artist. The Galleria Nazionale d’Arte Moderna. It was created in 1883 following the unification of Italy and dedicated to the modern and contemporary art of the new country. It moved to Villa Borghese http://lagallerianazionale.com/en/history/ in 1911 shortly after the park was opened to the public. 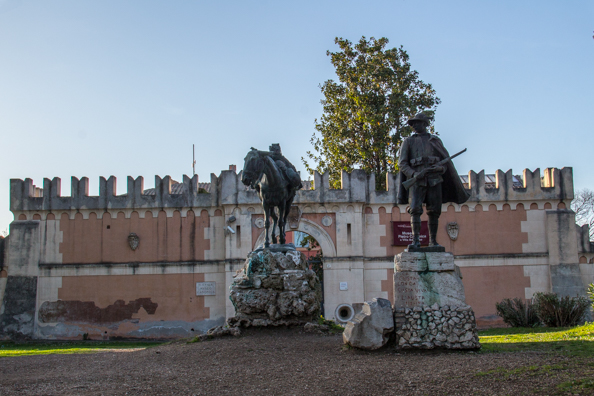 When the Zoological Garden of Rome was founded in 1911 Village Borghese was chosen as its site. Today it is known as the Bio Park and it is one of Europe’s oldest zoological gardens. Carl Hagenbeck’s http://www.bioparco.it/la-fondazione/la-storia/ original project comprised a twelve-hectare park where animals could roam freely. At the time this was a new concept and the was one of the most modern zoos of its time. The zoo has been enlarged and modernised and today it plays an active role in environmental education and the conservation of endangered species. Other attractions in the park include the Globe theatre (Italian productions only) and a puppet theatre. 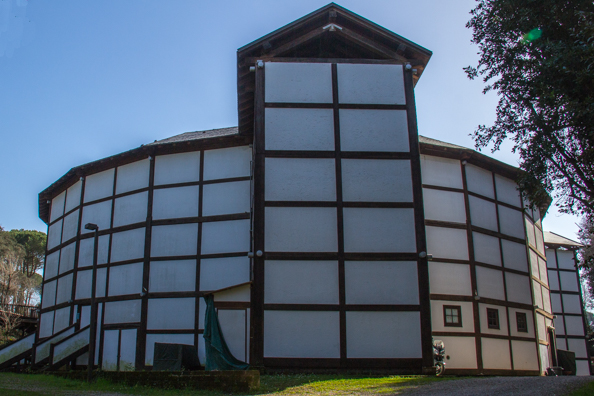 As I crossed the bridge into Campo Marzio http://www.italyguides.it/en/lazio/rome/districts-of-rome/campo-marzio below me I could see the villas of the Pinci family incorporated into a section of the Aurelian Wall commonly known as the Muro Torto (the Crooked Wall). I was on my way out of Villa Borghese and heading for the Church of Trinità dei Monti at the top of the Spanish steps which would bring me right back into the centre of Rome. 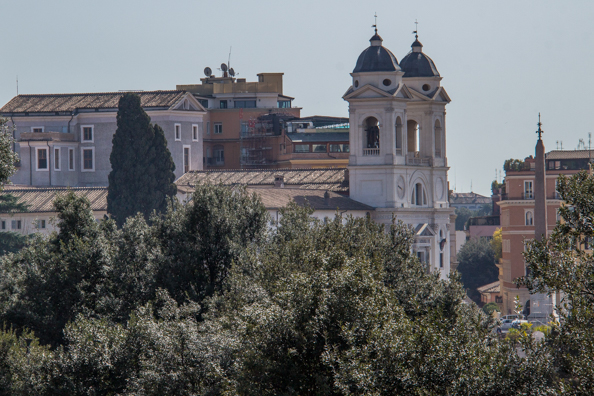