My first visit to Sirmione was on a lovely sunny, December day. This little town is situated on a promontory in the middle of the southern end of Lake Garda. This promontory is four kilometres long and as narrow as 109 metres in places. Visitors have to park outside the town and walk across a drawbridge and through a medieval gateway to enter the town itself. In the summer crowds flock here by road and water as regular ferries criss-cross the lake. In the winter, when the ferries do not run, the town is very quiet. Before I reached the entrance to the town a boatman hailed me from his boat bobbing on the water below us. He offered us a trip around the peninsula. It was the perfect start my tour. 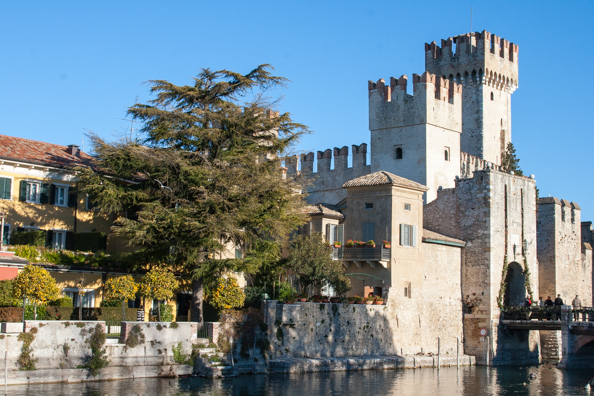 Sirmione has been settled since the Stone Age when fishermen probably lived in houses on stilts on the banks of the lake. The Romans also came here attracted not only by the beauty of the place but also by the healing properties of the thermal waters that bubble up from the bed of the lake. We had not gone far before we were able to see the bubbles rising to the surface. On the shore we could see the steam from these waters that are carried by a pipeline to a large spa on the shoreline. 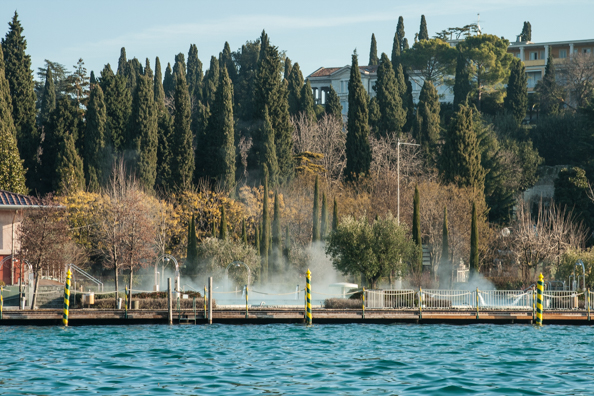 As we rounded the end of the peninsula some ruins appeared on the top of a cliff. These ruins are the subject of two misconceptions. They are known as the Grotte di Catullo (Catullo’s Cave) but they are not caves. These ruins have been there for centuries. It is possible that its dilapidated state following the plundering of the stones for new buildings was the reason for this name. They are actually the ruins of a Roman villa and the remains of some first century Roman baths have also been found on the site. These extensive ruins belong to a Roman villa built in the first century AD and abandoned by the fourth century. Rumour has it that the poet Catullus lived here. But many wealthy Romans came to the peninsula for the summer. It is possible that the villa may have belonged to the family of the poet but the poet himself died before this villa was built. Catullus is known to have lived somewhere on the peninsula as he speaks of the place in his poetry. Despite their presence over the centuries these ruins were not excavated until the nineteenth century by which time there was very little left as they have been used as a quarry for building stones. Set amid olive groves with splendid views over the lake this site is open to the public. There is a small museum at the entrance displaying artefacts found during the excavations. 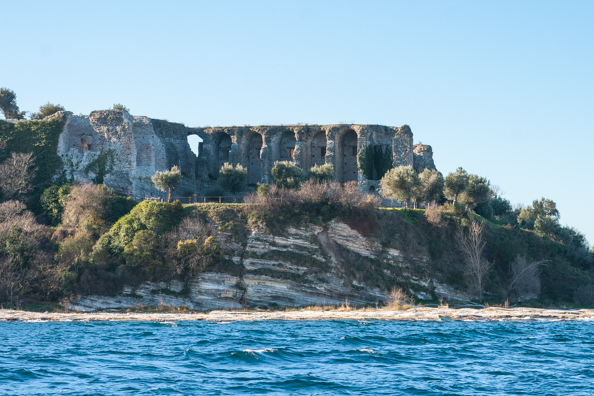 Our circuit completed we drifted slowly back to the little port passing the walls of Rocca Scagliera, a Scaligeri Castle. Rocca Scaligera https://www.lake-garda.eu/information/culture/rocca-scaligera/ was built during the thirteenth century on the site of a Roman building. Its construction was ordered by the Scaligeri or della Scala family, then lords of Verona. It was part of the defences of Verona that extended to Lake Garda and is considered to be the finest castle built by this family. The castle was built as a fortress to protect Sirmione from invaders and features an artificial harbour to protect the Lake Garda fleet. The circular wall separated the peninsula of Sirmione from the mainland and the only entrance was across its drawbridge. In 1405 the Scaligeri family abandoned the castle and it became part of the Republic of Venice. When Napoleon invaded northern Italy in 1797 it was briefly occupied by the French before being given to the Austro-Hapsburg Empire. The town and its castle became part of the Kingdom of Italy in 1860. At the beginning of the twentieth century it became the property of the Italian government when it was renovated and subsequently opened to the public. A visit to the castle is well worthwhile as the views from the main tower are fabulous. 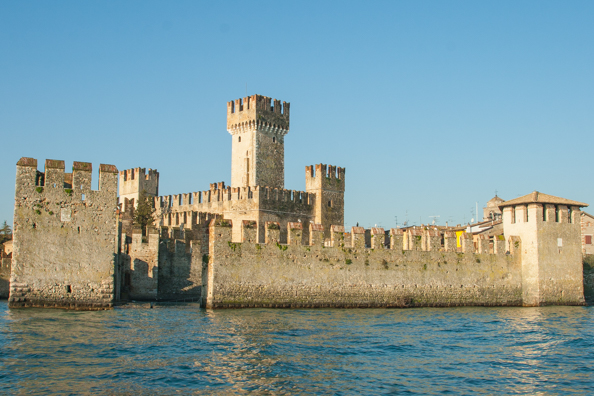 After disembarking we crossed the drawbridge and entered the town. The castle to the right, Rocco Scaligera, where Dante is said to have stayed, is completely surrounded by water. It was the stronghold of the Scaligeri family, the lords of Verona during the thirteenth century. Its central tower has a good view of the lake and surrounding area. Incorporated into the walls of the castle is the little church of Saint Ann. Built during the fourteenth and fifteenth centuries the interior is decorated with baroque motifs from the seventeenth century and decorations from the fifteenth century. 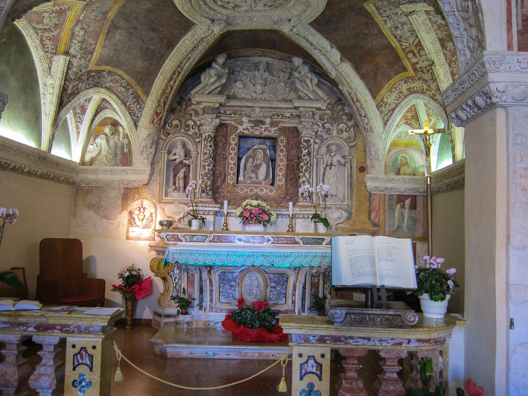 Via Vittorio Emanuele leads north from the castle, through the town, towards the Grotte di Catullo. A road to the right leads to the fifteenth century church of Santa Maria Maggiore. This church has some pretty antique columns outside. In the past materials from old buildings have been re-used in the construction of new buildings. Here the last column of the porch to the left of the entrance, is a milestone dedicated to the emperor Julian the Apostate. On the portico or parvis is a memorial stone dedicated to Jupiter ‘rescued’ from a Roman temple. At the end of the road is the spa hotel that utilises the warm sulphur springs rising in the lake. Aquaria is set in a large park on the shore of Lake Garda and uses the thermal waters that rise from the bed of the lake. The permanent temperature of this water is around 35°C. 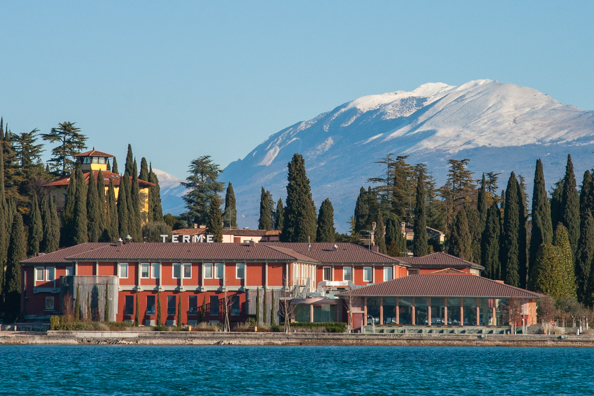 Via Catullo continues towards the tip of the peninsula passing close to San Pietro in Mavino a Romanesque church dating back to the eighth century and decorated with early frescoes. This is the oldest church in Sirmione although the Roman bell tower was a later addition and was built in two phases between the eleventh and twelfth centuries. In 1320 when the building was renovated part of the façade was rebuilt. According to graffito inside the roof was re-plastered in 1827. There is a great range of frescoes inside the church. 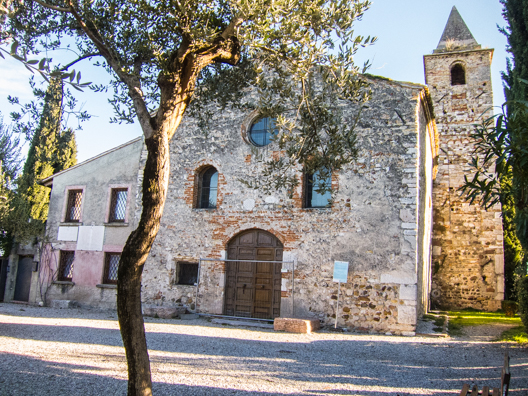 At the end of this road is the entrance to the so-called Grotte de Catullo (caves of Catullo). On my way back towards the town centre I passed the house where Maria Callas http://www.imdb.com/name/nm0006568/bio and her husband Giovanni Battista Meneghini, an Italian businessman, once used as their summer home. Menghini was an avid opera fan and when he married Maria in 1949 he immediately took control of her career. During their marriage she reached her zenith at La Scala (1951-1958) and was also recording during that time. The couple lived near Verona but spent several weeks every summer at the villain Sirmione. After meeting Greek shipping magnate Aristotle Onassis through her husband, a torrid affair erupted and her marriage ended. She never returned to Sirmione. The villa has been converted into apartments. 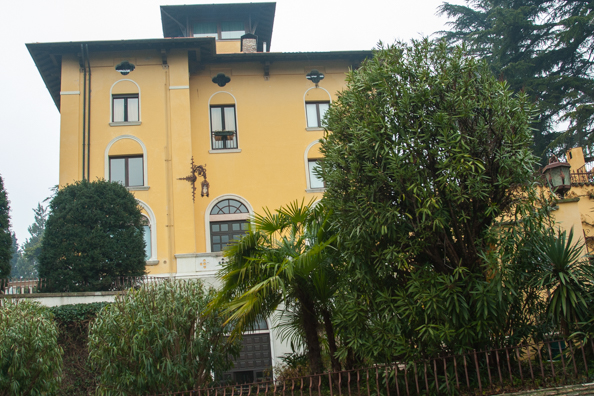 Back in the centre of town tempted by the pastries in the Scaligeri Bar I stopped for a coffee. While I was there the local choir came in for an Aperol Spritz and snacks. It was a lovely moment when they burst into song – a great finale to my day in Sirmione.