My Favourite Places in Kyoto, Japan

Kyoto has so much to offer it is a must for anyone visiting Japan. It was once the home of the Emperor. It is the site of over two thousand Buddhist temples and Shinto shrines of which seventeen are UNESCO World Heritage sites. Naturally, such a famous town attracts crowds but it is easy to lose the crowds and still appreciate the flavour of this heritage town – a seamless fusion of ancient and modern. 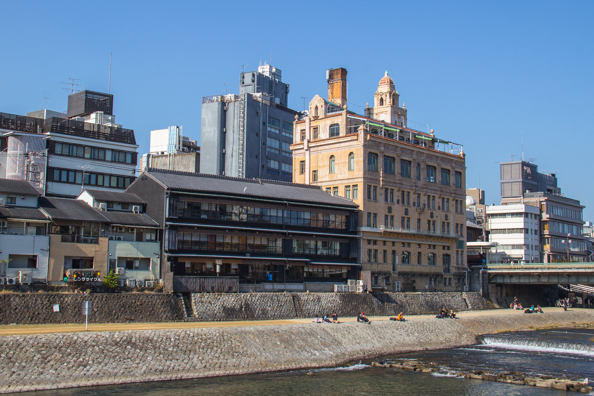 Kennin-ji Temple is the oldest Zen (a branch of Japanese Buddhism) temple in Kyoto and was founded by the priest Yousai in 1202. Yousai, who visited China twice during his lifetime, is renowned for introducing both the Zen sect, featuring the Zen Ensō circle and the tea ceremony to Japan. After figuring out the complicated route between the two main halls I shuffled around the Dharma Hall in a pair of incredibly uncomfortable slippers. It was worth the time and discomfort to admire the drawing of the twin dragons by the artist Koizumi Junsaku on its ceiling. 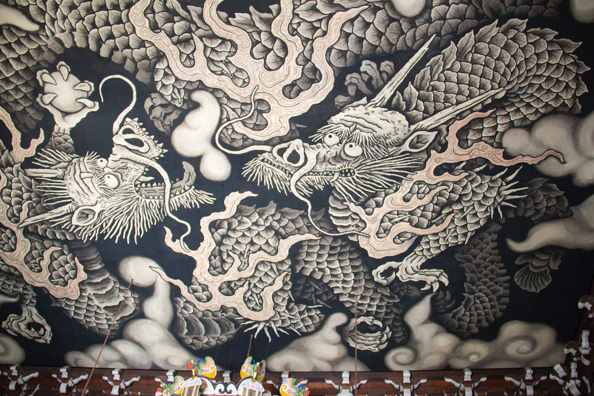 Outside the main hall is a pristine white karesansui, a dry gravel Zen garden being enjoyed by visitors sitting on the steps of the building. I moved on to some more traditional gardens in the extensive grounds of the temple. A place of peace and beauty. While enjoying the gardens I was entertained by a very young man trying to get to grips with the art of ladling water from a barrel. 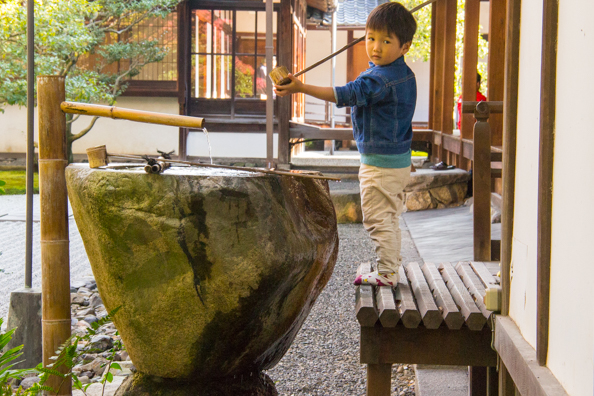 Banks of the River Kamogawa

Moving on from the temple I bought some food from a Family Mart near the River Kamogawa that flows through the centre of Kyoto. The first time I had a meal by this river I paid a large supplement to sit outside by the water. This time I sat on the bank and ate my picnic. Family Mart has stores throughout Japan which are open twenty-four hours and offer every facility a tourist could want – cash machines, a great variety of snack food and clean toilets. Sitting by the river was very relaxing and also an opportunity to enjoy the local wildlife. Several grey herons were strutting through the shallow water in front of me. 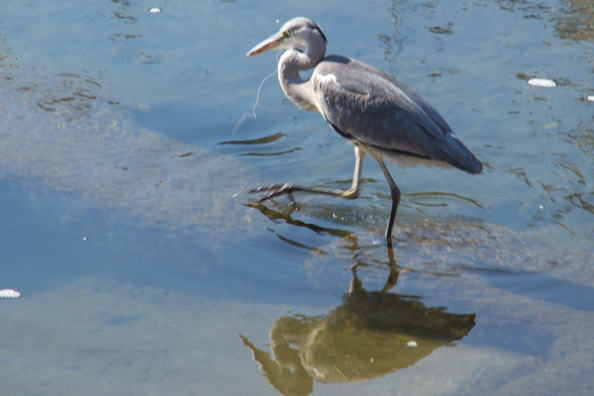 When I finished my lunch I walked the short distance to the famous Gion district. On my way I passed the statue of a Kabuki actor. Kabuki is a form of classical Japanese drama renowned for spectacular productions. I was not able to visit the Minamiza Kabuki Theatre as it was closed for renovation. Turning off the frantic main street I was soon exploring the empty streets of Gion. This district is famous for the tea houses (ochaya) where the geishas and maishas (geisha apprentices) entertain. In the Gion district they are referred to as Geiko and Maiko which is the local dialect. Geishas are ladies (of any age) who have undergone a lengthy and rigorous training in the Japanese arts to become highly skilled entertainers. They add a special touch to high-end dinners, private parties and special events. The services of geiko are expensive and exclusive, traditionally requiring an introduction from an existing customer. In recent years, however, some travel agencies and hotels have started to offer lunch or dinner packages with a maiko to any tourist with a sufficient budget. Early afternoon is the best time to wander through the narrow streets appreciating the traditional wooden machiya merchant houses that populate the area. Property tax was formerly calculated according to the width of the street frontage so these houses have narrow façades but extend a long way back. Many of these buildings are now occupied by top class restaurants serving Kyoto style kaisek ryori (haute cuisine Japanese style). 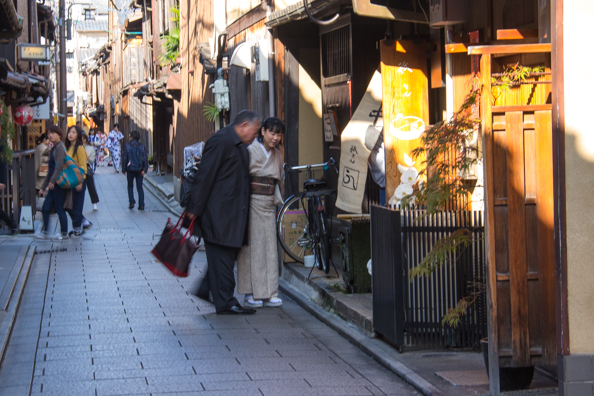 As dusk falls tourists flock to the Gion district all wanting to catch that elusive shot of a genuine Geisha on her way to work. I went back later and I was lucky 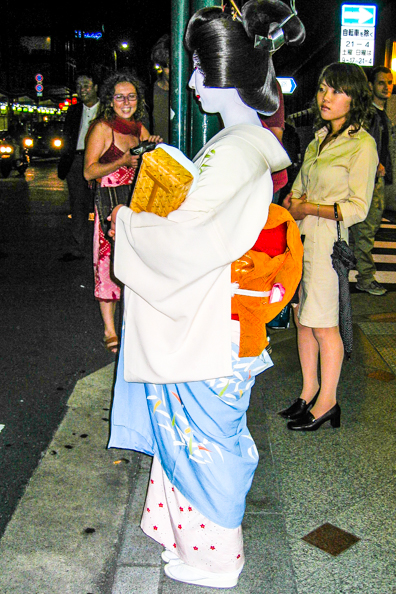 A short distance from the Gion District is the Yasaka-jinja Shrine one of the most important shrines in Kyoto. It is also known as the Gion shrine because it sponsors the biggest annual event in the city, the Gion Matsuri. This shrine is right on the main street and it is impossible to miss it. I loved the bustle around the main buildings and the sweet stalls displaying flamboyant concoctions. When the constant clanging of the temple bell becomes too much visitors can relax in the Maruyama Park. This pretty park is a peaceful contrast to the mayhem in the temple below it. It was autumn and the brilliant colours of the foliage were reflected in the duck pond. 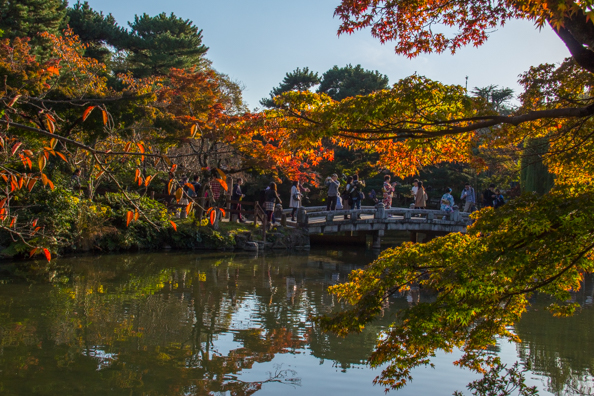 As a die-hard traveller I have been through many stations but none have impressed me as much as Kyoto railway station. I would not normally choose to spend an evening in a station unless I was waiting for a train. This station is different. The building housing the city’s transportation hub was constructed in 1997 twelve hundred years after the city was founded. There is nothing traditional about the futuristic design conceived by the Japanese architect Hiroshi Hari. The large main hall, the Matrix, has an exposed steel beamed roof. There are two sides to the main hall, Karasuma and Hachijo. Karasuma is the busier of the two and faces downtown. Hachijo on the south side is calmer, and quieter. Each side has several levels all linked by escalators. The top levels of each side are linked by a sky walkway. The open-air terraces at the top of Karasuma has benches in the shelter of carefully planted trees. Ideal for courting couples. Up there the fresh air and views over the city below are exhilarating. The large open space on the ground floor of the main hall is ideal as a venue for special events and as I was leaving I paused for a while to watch a dance competition that was taking place there. 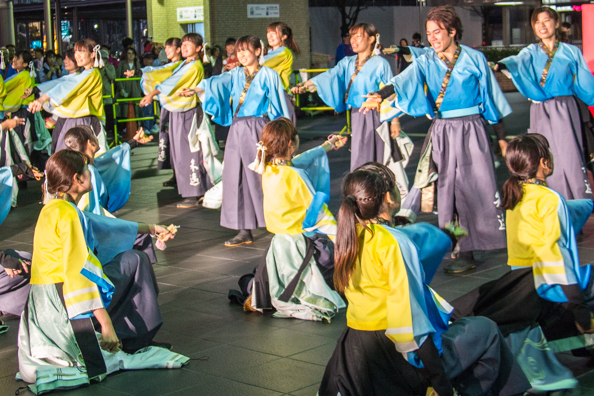 The subway under the main road in front of the station is a huge shopping mall and a great place to observe how the locals shop and eat. The alleyways are lined with shops but my favourite area is where the restaurants are found. Rows of small restaurants offer a variety of cuisines and most have models of their dishes and drinks displayed in the window. Menus in any language are therefore not a necessity – just choose and point. I was hoping to find a good curry and succeeded at the Lipton Tea House. The Lipton tea brand opened its own Tea House in Kyoto in 1930 to promote its tea (with milk) and delicious cakes. Also on the menu was fillet steak with curry sauce and rice. Perfect. The after-work rush was nearly over and most of the queues outside the small restaurants had disappeared. Rows of chairs placed outside so diners could wait in comfort were empty. I was able to sit down straight away. The food was delicious and the atmosphere was great. I thoroughly enjoyed my solitary dining experience and the attentiveness of the staff. 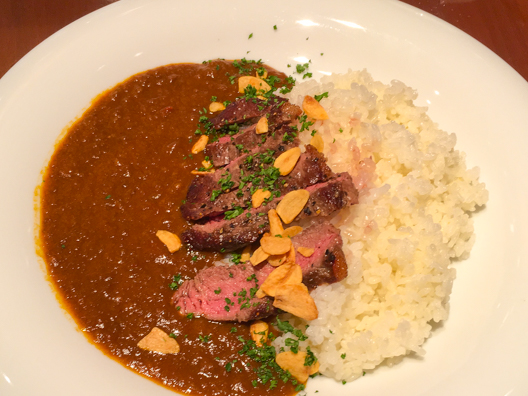 On my last morning there was just time to fit in a visit to the Fushimi Inari Shrine. This temple is famous for its ten thousand small red torii gates positioned so closely together they give the appearance of several long wooden tunnels. These gates arch over a long path that winds up the hill behind the shrine. The further along the path you go the fewer people you meet. These gates have been donated and inscribed by businesses and individuals thankful for their prosperity. It was so crowded at the first that it was difficult to take a pictures of the tunnel itself. I stopped at the top of the next tunnel where another photographer was awaiting the chance to get an image of an empty tunnel. I was taking photos of the lamp hanging above me when I realised the tunnel ahead was devoid of people so I took some of the whole tunnel. When I turned around to leave there was a long queue behind me waiting to enter the tunnel. The Japanese are so courteous they were waiting until we had finished taking our photos – amazing! 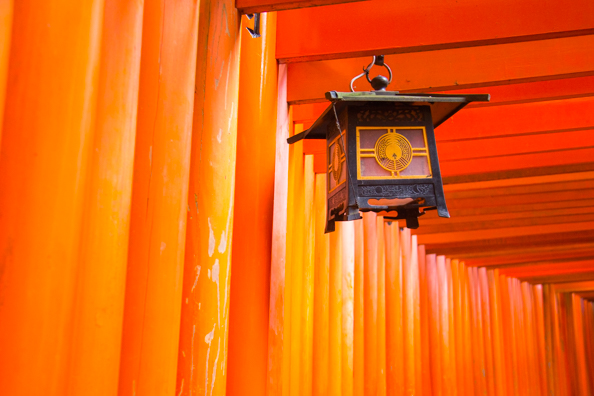 Fushimi Inari is the most important of several thousands of shrines dedicated to Inari, the Shinto god of rice. Foxes are thought to be Inari’s messengers, resulting in many fox statues gracing the grounds of the shrine. Inari’s foxes are generally considered helpful, but they have also been said to bewitch people. The keys that some of them hold in their mouths are for the rice granaries others are carrying rolled up messages. 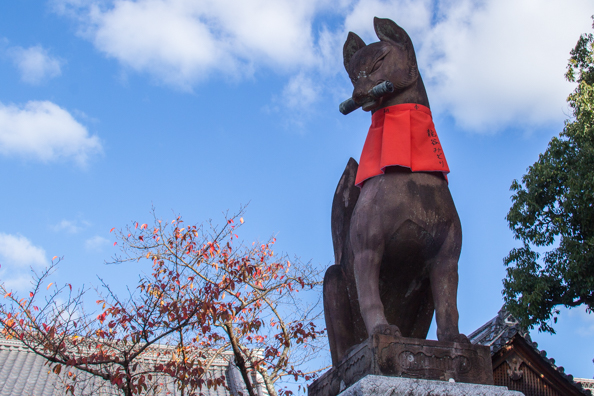